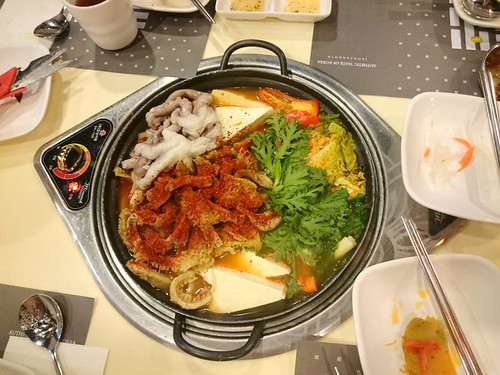 It’s funny how we decided to go for Korean food just days before our trip to South Korea.  We went to MyungDongOk Korean Restaurant for dinner, a restaurant that I’ve been to the last time I was in HK.  I would have opted for a new Korean restaurant as always, but when you have a big group, you have to go with the flow.  The place was unchanged from the last time I was there and we actually sat next to the table where we were last time.  It’s one of the few big tables in the restaurant that can fit up to 8 people.  My cousin made reservations at the restaurant beforehand so we were able to get a table on time and without having to wait.

The space is fairly big for a restaurant in Hong Kong 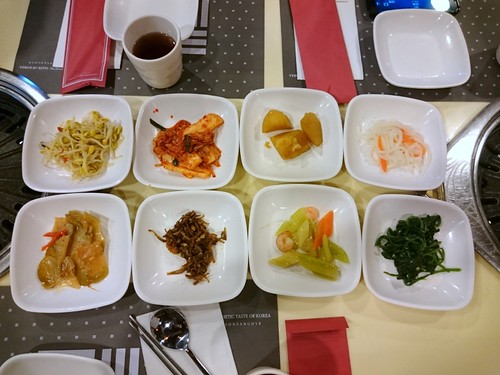 Banchan of many types

We started off by ordering food to grill.  The servers started us first on the banchan.  Yum!  They then opened up the center part of the table with the grill and brought the onion, pork belly, ox tongue, and greens. 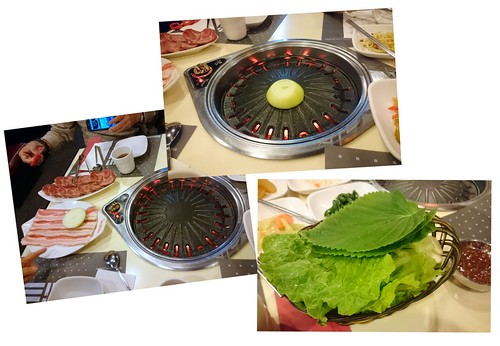 The server actually grilled the pork belly for us instead of us having to do it ourselves.  She did it so quickly and “efficiently” that we half-suspected that they wanted us out of the restaurant quickly so they could have another round of diners.  It was nice to have someone cook for us but that also took half the fun out of Korean barbecue.  The pork belly was pretty good and I loved putting into the greens with a raw piece of garlic, kimchi, and anything else I could fit to wrap it up into a little pack before I shoved it into my mouth.  It was pretty good.

We spaced out our grilling and didn’t start grilling our order of Grilled Ox Tongue until after we were all done eating the pork belly.  Again, the server insisted that she cook the meat for us.  When it was done, I found that the piece wasn’t even fully cooked.  It was incredibly hard to masticate and chewy.  It was like chewing through rubber and flavourless.  What the heck?

We ordered a plate of pork hocks that were pretty tasty fortunately.  This plate was already cooked from the kitchen so we didn’t have to worry about fighting to cook it ourselves. 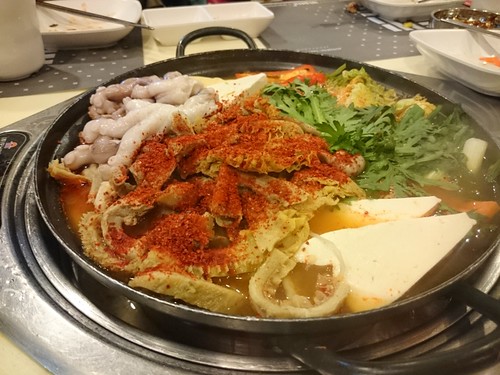 Next up, we ordered something from the hot pot category; Spicy Octopus and Ox Intestine Casserole.  It was an impressive pot of ox intestine and octopus doused in some spicy sauce with tofu and vegetables.  We were well aware of what was happening with the server trying to rush us out of the restaurant so we informed the server that we would be taking care of this hot pot cooking by ourselves.  As such, we actually didn’t end up cooking the octopus fully and ate it when it was still a little tough to chew.  Fail!  For this one, we really had to leave the stuff cooking for longer unlike the meat.  The soup base was incredibly strong and we were quite stuffed! 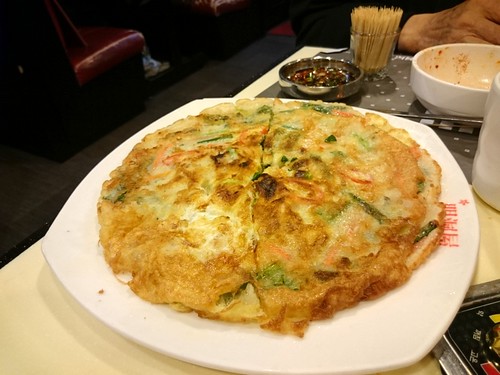 The Pan-fried Pancake with Seafood and Scallions was a disappointment.  I’ve had much better seafood Korean pancakes before.  This one didn’t contain much seafood, was soggy, and wasn’t fried very well.  So sad for such an amazing dish!!

The Marinated Sliced Beef in an Earthen Ware was good, especially with white rice.  It was in a hot stone pot where there were few pieces of beef with vermicelli in the hot, sweet soup. 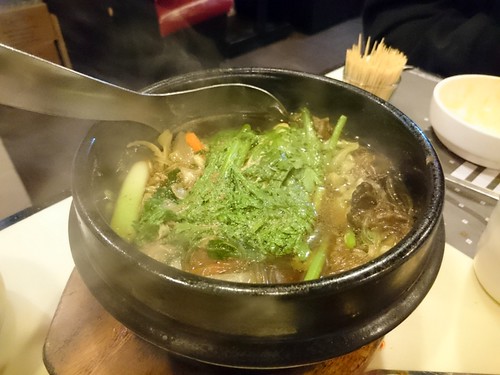 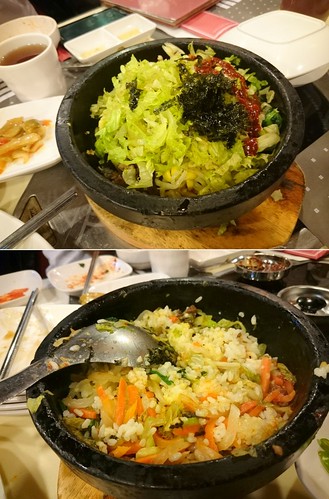 Lastly, we had an order of a typical bibimbap, Rice Mixed with Vegetables in Hot Stone.  This was probably one of the better dishes all night since the rice mixed with all the vegetables and hot sauce made for an incredible texture and taste.  It’s hard to go wrong with bibimbap. 🙂

All in all, our evening was salvaged a little bit with more food as the night went on and we refused to let the server bully us into leaving early.  However, I know that I’m not going to return to this restaurant again.  I’ve already been here once and the service wasn’t amazing until the end — we kept asking them to refill the banchan and it took several requests to get some.  There was another restaurant down this street that had long line-ups of people.  We need to get ourselves to one of those restaurants!