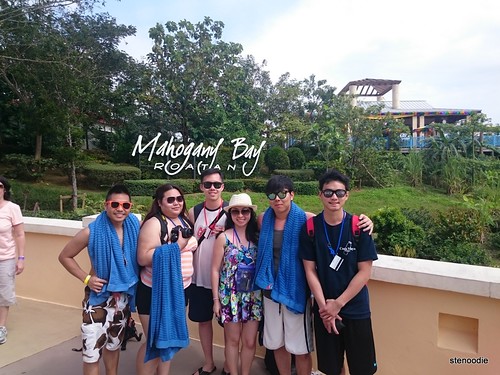 Who would have known that I’d be participating in mini excursions every day that we dock at a new country?  I feel very fortunate to get to do this and also travel with so many like-minded individuals too.

Upon arriving in Mahogany Bay, Roatan, we were able to negotiate a good deal for the 20+ of us to ride round-trip to West Bay for just USD $10.  It was a 30-minute van ride where we rode along the coastline and saw the houses and architecture of how the people lived.  We also saw another cruiser, Norwegian Dawn, in the backdrop of the scenery and calm ocean view. 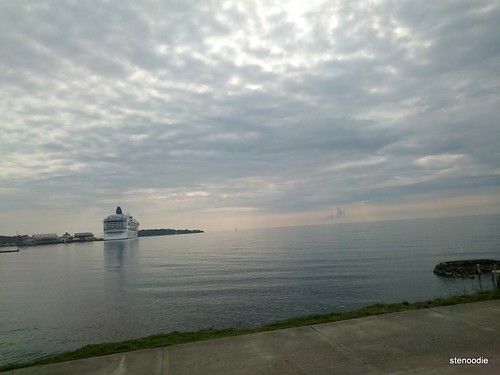 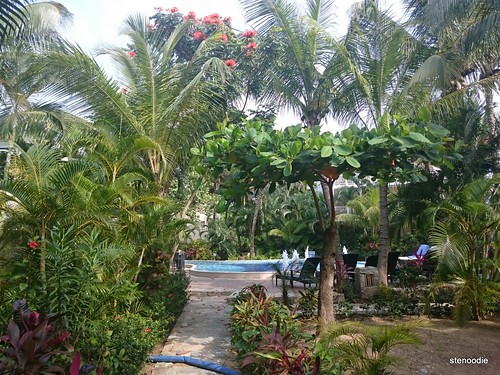 After entering Paradise Hotels & Resort, this actually does look like paradise

We arrived at Paradise Hotels & Resort and I was a bit confused at first that we were on a private resort.  We walked through the beautifully air conditioned reception area and designed area before we got to a shaded bar area that looked out onto a beach and were told that we had to pay another $10 in order to use the beach and as an “entrance fee” which I thought was a bit of a rip-off and an undercover fee that none of us knew about. 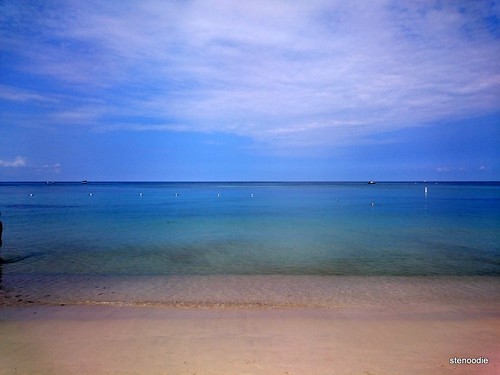 The beach at this time in the morning was relatively quiet and devoid of people.  Very quickly, we were approached by the activity promoters about doing an excursion off the beach.  Somebody was able to negotiate a snorkeling and dolphin watching excursion originally priced at $55 to $25, which was a nice steal. 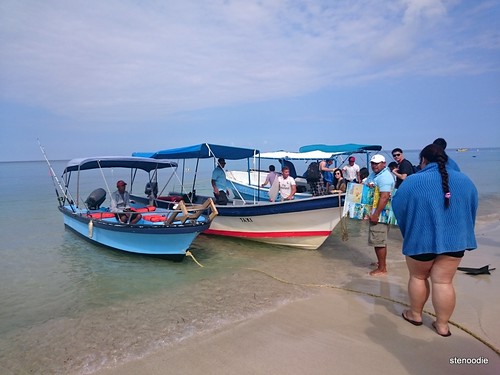 We split up and rode in two boats

We paid, split up our big group for those of us who wanted to go on this mini excursion into two boats, and off we went.  It was a gloomy day overall but I didn’t mind it since it meant it wasn’t too sunny and there’d be less chance of getting a bad sun burn while out. 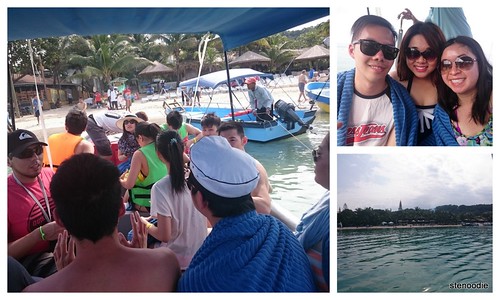 Together in a boat off to an excursion

We drove out into the water towards what appeared to be the west coast and passed by the shoreline and kept driving and driving very far.  Little was mentioned about where we were actually going to do the snorkeling and dolphin watching… thus, I found it rather unprofessional and a rip-off that the first stop we did was to look at a single starfish that one of the staff jumped out of the boat to show us and have us “play” with it.  We actually didn’t know that this was the purpose of the stop since we stopped in the middle of nowhere and the purpose wasn’t known to us until 5 minutes — “We’re just stopping for you to take pictures with the starfish”.  Well geez, you could have told us that was on the itinerary too.  *shm*.

One thing they did tell us was that we were going to dolphin watch first and that snorkeling was last on the list.  We again drove out a long way before we got to the dolphin area.  We drove out so far that I thought it negated the time that we spent in the 30-minute van to get to the resort. -_-

Dolphin watching from the boat…

Dolphin watching was literally dolphin watching as we sat in our boat while it drove near the caged training grounds and watched dolphins get fed and perform a few moves like jumping, flipping, standing.  They sure were cute with their grey and long snouts but I couldn’t help but think about the widespread cruelty process of dolphins that exist all around the world in order to take dolphins from the wild.  I used to love dolphins as my favourite mammal but ever since I watched a documentary on the little-known cruelty that exists for dolphins, I feel sorry for any captured dolphin that is made to perform and serve for tourists like these. 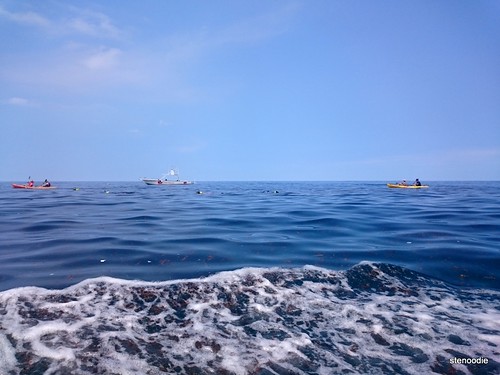 Anyway, we stayed here for a couple of minutes and I believe even Alejandro felt that this was a deliberate time waster that dug into our remaining snorkeling time and he yelled out for the guy to take us to the snorkeling part.

On our way there, we bumped into the other boat that was just on their way to see the dolphins.  What the heck.. they seriously wasted a lot more time than us.

We finally got to our snorkeling location and we were distributed the snorkeling gear but they apparently didn’t have enough masks + breathing tubes for everyone to use.  Wow.  So terrible.  The guy didn’t even apologize and mumbled something about thinking that they thought they had enough gear for 16 people.  What BS.  If I cared more, I would have complained and bitched about getting some money back for those who didn’t have the full snorkeling gear because that’s what we had paid for.  Seriously, *smh*.

They didn’t even teach us how to snorkel or use the gear although I guess it’s simple enough for some people.  Good thing I had previously snorkeled before and knew what I had to do (first time snorkeled in Punta Cana :)). 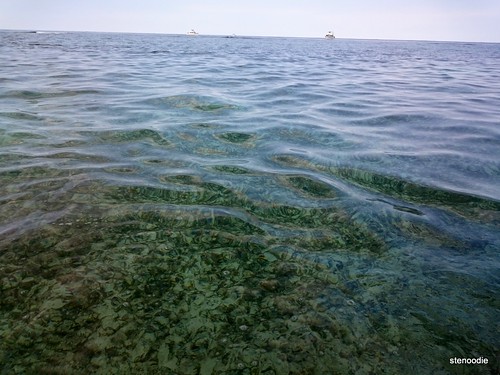 We jumped into the very salty and cold water (got used to it in no time) and began looking into the depths of the water to see the reefs and fish that were below us.  It was pretty.

I dislike using the full snorkeling gear and having to breathe through my mouth through the tube so I merely held my breath every time I faced down to look under the water.  The ocean water was definitely salty here.

After maybe about 10 minutes, it was time to climb back into the boat where we dried off as best as possible, resumed our seating positions, and drove back to the shoreline where we got on.  The trip coming back was so much shorter. 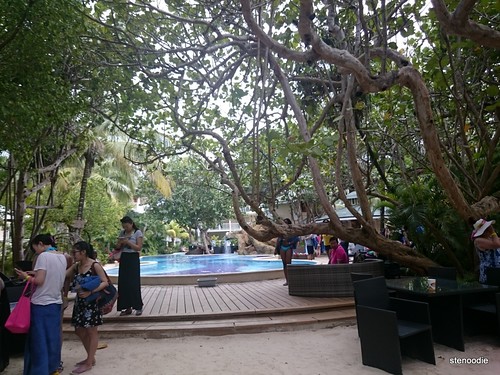 Another look at the really nice resort that we were at 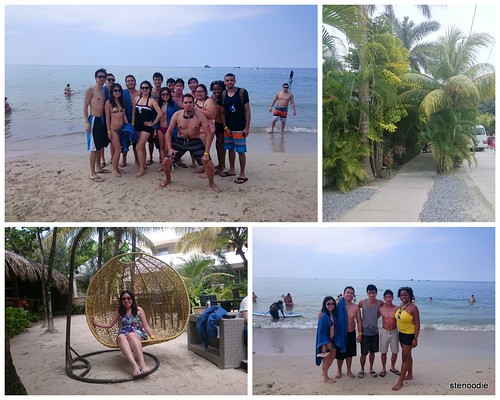 Nice group shots with the ocean in the background!

I’m super glad that we were able to haggle down the price to $25 as I think any more than that would have been an even bigger rip-off.  It wasn’t worth more money to sit in a dinky boat for the majority of the excursion in order to view and feel one single starfish, watch caged dolphins from afar, and only get to do the main attraction of the excursion for 10 minutes and not even everyone got to use the full gear. 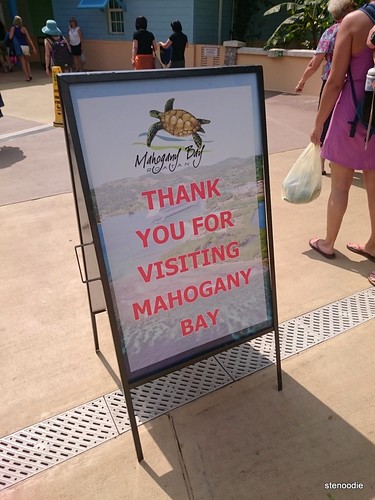 Until next time! Maybe I’ll try their famous zip-line!

Seriously… -_-.  Like I said, good thing the price was cheap.  The only part worth seeing was that part of the ocean where we saw some somewhat nice reefs down below.

Anyway, we got about 30 minutes of spending time on their beach before we took the van back to the pier to board Carnival Splendor again.  Sereen actually got accosted by the security guard who told her she couldn’t stay on the beach since she didn’t pay the $10 entrance fee for the wristband.  So lame.

All in all, Mahogany Bay, Honduras is nice but I think the experience could have been more fun.  There’s so much potential out there.