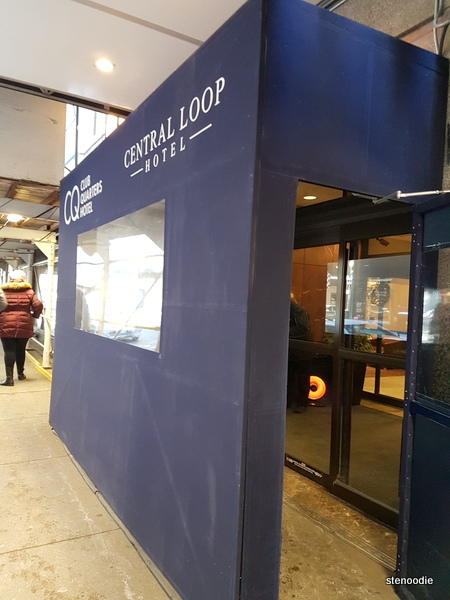 What an excellent hotel!  We stayed here during our Chicago trip in December 2017 for three nights (December 27 to 30).  This was part of the hotels chosen with a flight package bought through Expedia.

Club Quarters Hotel, Central Loop is located in the business district of Chicago and thus it’s rather quiet in the night and on the weekends.  It is walking distance to the Willis Tower and subway as well as relatively close to Millennium Park to see the Bean as well (places we visited and subway that we used during the trip).  A number of restaurants and shops are also nearby.  It was about a 30-minute taxi ride from the Midway Chicago Airport. 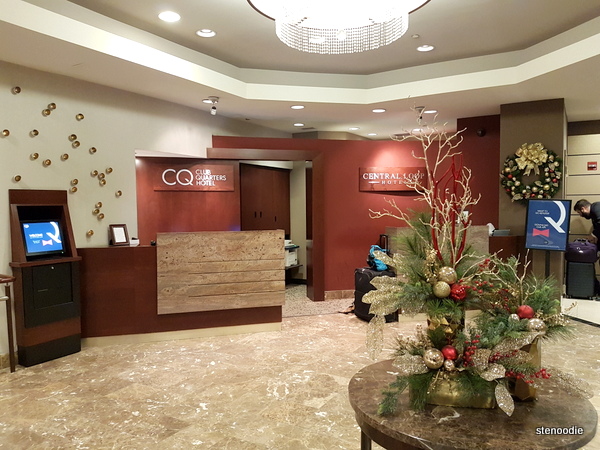 When we checked in on the afternoon of the 27th, we were able to get into our room early.  The staff at the reception desk was friendly and the check-in process was seamless.  The lobby of the hotel was very nice and welcoming although I felt a little bad for the staff who worked at the front desk because it was the dead of winter and every time the doors opened, you could feel the wintry blast of cold air hit the lobby.  Perhaps they’re used to it? :3

We checked into our room on the ninth floor (the elevator requires a key card to be tapped in order to push the buttons — safeguarding strangers!).  It was a standard room with a queen size bed, desk, flat-screen TV, and a huge washroom!  When I saw it, I immediately knew that we were given a room that was accessible.  I had seen a similar large bathroom like this when I had roomed with a friend before who required accessibility services.  I loved it though.  The bathroom was so large!!!  Due to it being accessible, the shower was a walk-in with a hand-held showerhead (I love those) with a fold-down seat too.  The shower curtains were clean and there was a shelf for your soap and shampoo too. 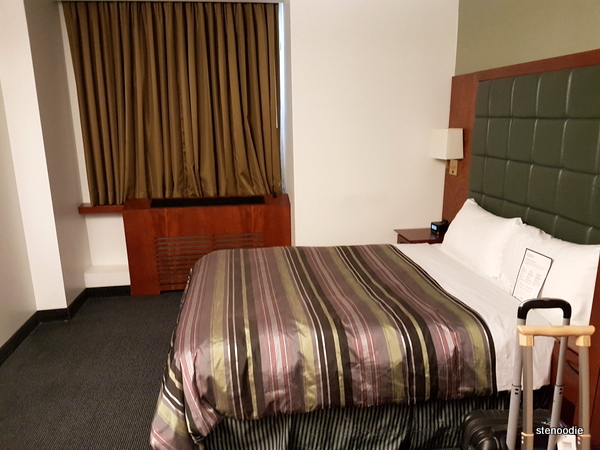 First look into the room 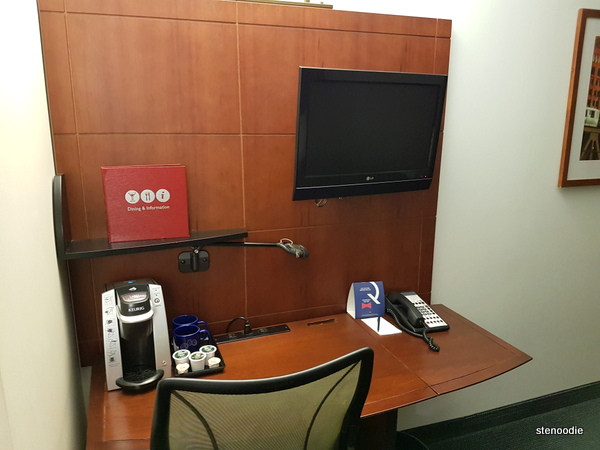 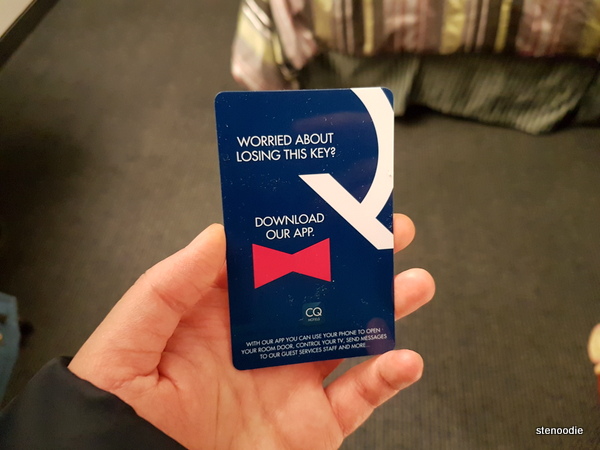 I loved how clean and bright the bathroom was.  I liked the mini side-shelf that had space for me to put my toiletries too.  It just looked so neat and perfect.  There was a large microscopic make-up mirror too.  There was a hair dryer as well as the regular complimentary toiletries. 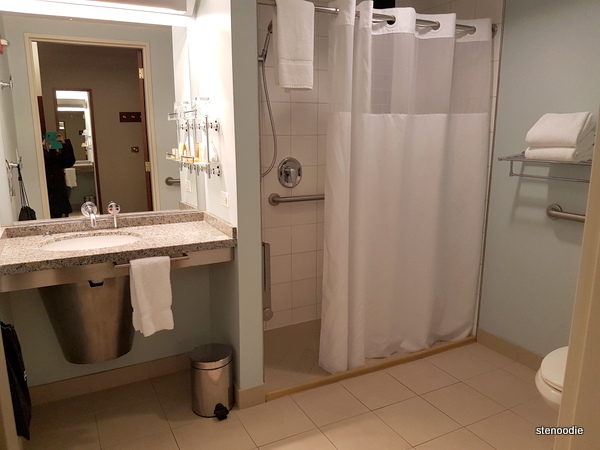 Look at this gigantic bathroom! 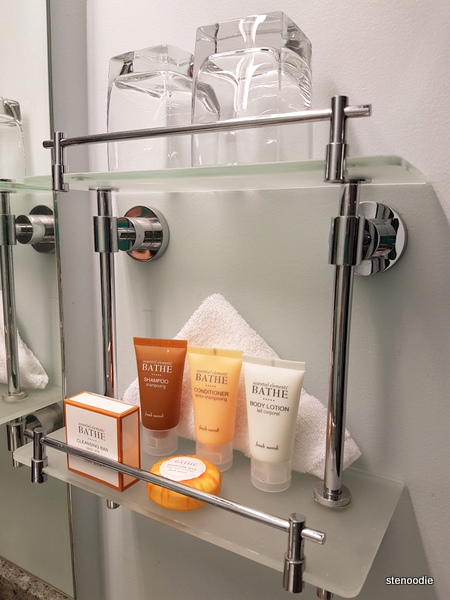 There was a closet and a Keurig coffee machine in the room too.

Unfortunately, later that day, after we had had some clothes on the floor, I picked them up discovering that my pair of tights had a sheen of white dust particles on it.  Eek…  I wasn’t sure what it was or if the heater in the room was perhaps blowing out dust into the room.  Thus, we went downstairs to inquire at the front desk.

The same female staff served us and she immediately apologized for the lack of cleanliness and gave us the option of moving into another room.  She gave us the key card to a room on the sixth floor and asked us to check out if it was okay first before we moved into it (if we wanted to).  I was delighted with this option and impressed with their customer service. 😀

We checked out the room on the sixth floor but although the general area was a little bigger with even an armchair in the room, when we walked into the bathroom, it was one of those general standard ones and this one looked especially tightly enclosed.  I much preferred our large accessible one.  Thus, we went back to the front desk and requested that they simply vacuum our room and change our bedsheets (in case the dust from the heater had blown on to it as well).

When we returned to the room later that night after dinner, the carpet in the room looked so much cleaner!  Perhaps the problem was simply that the carpet wasn’t vacuumed recently… anyway, we had no more problems after that and I was glad because it would have been a hassle to remove all our belongings from one room to another anyway after already being unpacked. :o]

They have refillable water bottles near the elevator for your perusal.  This was so smart! 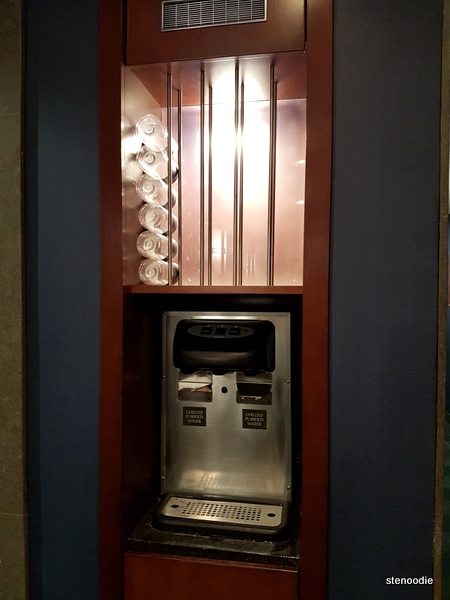 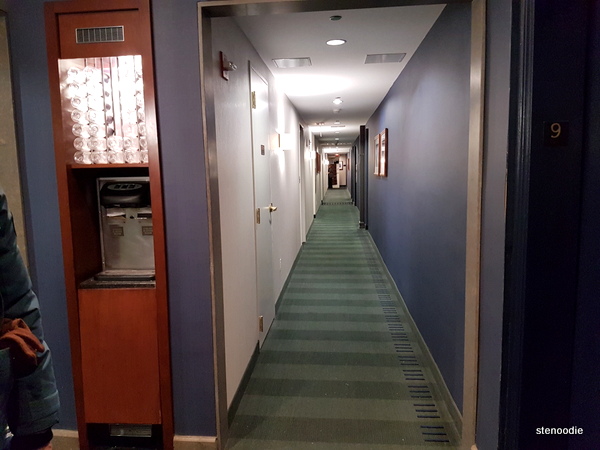 You can see the hallway (9th floor)

Lounge for anything and everything

That night, we also checked out the amenities and facilities in the hotel.  In the lower level a few steps from the main lobby, there was a club members’ lounge (accessible only if you had the key card).  This lounge was so impressive!  It was so large and spacious with so many bar chairs and tables, regular tables with armchairs and work stations with computers, a printer station, and also two private rooms.  You could technically have private meetings here or small group parties.  It was so cozy and nice!

Also, they had a refreshments and drinks available in a small kitchenette.  There were an assortment of snacks like peanuts and wasabi peas.  There was a coffee/espresso machine!  There was also filtered chilled or unchilled water and hot water too.  It was so nice!  (Unfortunately, on the last night we were here, the coffee machine seemed to be broken and all the snacks were also removed). 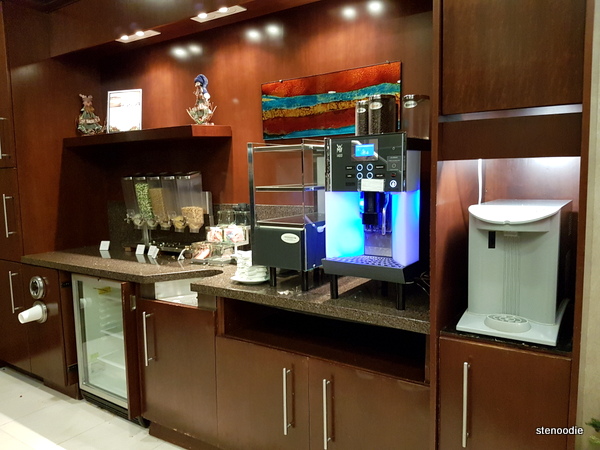 However, we took advantage of their printer station and printed out our boarding passes before we left.  It was so handy and simple to use!

We also checked out their gym which was downstairs.  It was so large and modern and clean inside! 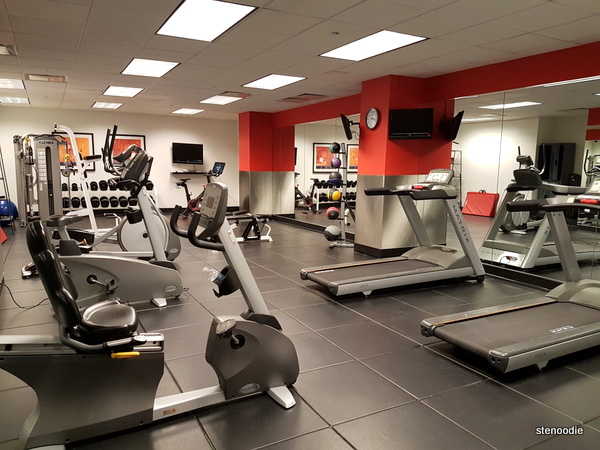 Our check-out process was easy.  We were also able to leave our luggage in their storage for a few more hours before we finally departed the city.  I really liked this hotel! 🙂