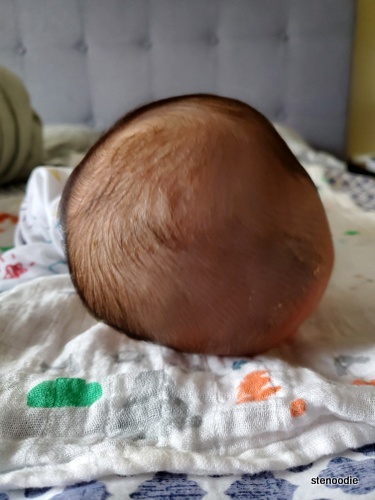 Funny angled photo I took when she was doing tummy time.  It looks like she is just a head here. XD

The little baby is continuing to grow and has surpassed 10 lbs of baby now.  She’s definitely a lot heavier and longer.  When laying across my lap, she stretches beyond the length of my hips.  There’s definitely no way for her to ever squeeze back inside me ever again. 😂😂

We’ve developed a system now.  Thank goodness my mom lives with us.  I honestly don’t think we could function or live without getting frustrated with each other without an extra adult in the house to split up the childcare and chores that come with it.  An extra adult means we can actually have some time to shower, eat, and steal away to do something other than taking care of the baby.

Ken takes the night shift, anywhere from midnight to 7 am to take care of baby.  She feeds two to three times a night with a diaper change.  She eats less at night now which means she is adjusting to the day and night times.  She doesn’t cluster feed anymore; thank goodness.

Mom takes care of baby from when Ken has to start work and before I wake up to pump breast milk.  She also helps in between the day when we need an extra hand and/or when baby K is extra fussy.  At the beginning, mom had the perfect hold and baby K would sleep so snugly in grandma’s arms.  Now baby can be more inconsistent with liking who holds her and how she is held.

I look after baby K during the daytime and pump milk four to five times a day.  I’m glued to the electric pump to the wall, but I’m used to it now.  We also have a routine for washing all the pump parts and bottles.  We no longer struggle like we did in the first week.  Rinsing out the bottles and parts make a big difference between washing and sanitization in general.  My milk is a lot thicker now.  I feel like baby K doesn’t need to drink over 100mL at a time to be full because my milk has matured. 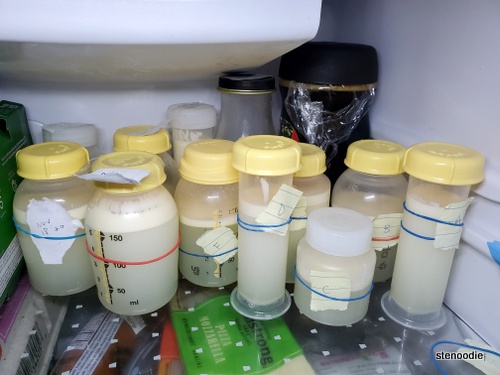 My stash of breast milk in the fridge just before I began to put some into the freezer.  I labelled them “A”, “B”, “C”, etc for consumption at first but then started to put dates on them.

I’m pumping so much milk that I have a slight oversupply, something I never expected to have.  The bottles of milk in the room grew from rotating four bottles to having to put them inside the fridge because they were sitting out for too long.  Breast milk stored at room temperature is only good for 4 to 8 hours whereas breast milk stored in the fridge can last up to 8 days.

The bottles of milk in the fridge grew from four to seven to eight to nine to now 12.  I remember saying that once I had seven bottles in there, I had to consider freezing milk.  I was very reluctant to start freezing milk or starting a freezer milk stash because I’d rather baby K drink the freshly expressed milk.  I also didn’t want the hassle of eventually thawing the milk and giving it to her and throwing out the one-time use plastic bags — it’s wasteful.  Also, frozen milk is less nutritious to refrigerated to freshly expressed milk. 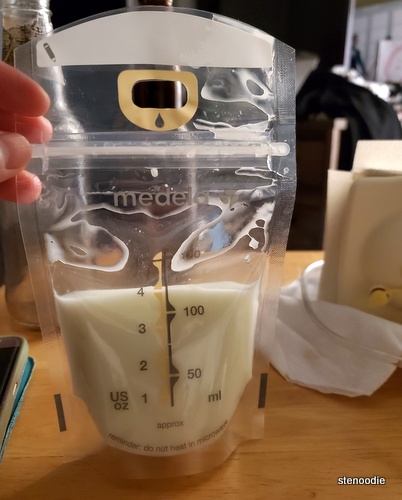 My first bag of breast milk to be frozen. I only started freezing 100mL or so since I wasn’t sure how the bag would hold…

Baby K started playing with her saliva the other day.  She’ll push out extra saliva-like bubbles and move it around her lips.  This is an early sign of teething!

She likes to look at objects in the direction of the ceiling nowadays.  She’s curious.  She’s started to smile and it’s soooo adorable.  I can’t help smiling myself and talking even more excitedly to her when she smiles too. ^_^  Her gumless smiles are so adorable.

I’m very careful and cautious about oversharing her photos online on social media.  My Instagram account is on public view, so I won’t ever overshare photos or videos of her face on there.  It’s not safe.  I don’t want my child to have a digital footprint so early.  It’s not fair to her if she chooses not to have these moments documented for all to see.

On the other hand, it feels restricting to keep everything so private.  However, safety is the number one priority.

(I’ve created a close friends list on Instagram and will occasionally share cute moments on there to that specific group of people. 🙂  On Facebook, I’m more willing to share her photos since it’s not public.  But with all this said, who knows if I will change my mind one day.  And although I’m not sharing photos of her face openly, I am sharing her growth journey in words on a public blog, so it is a bit ironic…)

Her two-month wellness visit went well.  She’s growing well and on the correct growth path.  She received her first two immunization shots and one oral vaccine.  She cried so achingly after the first needle went into her chubby thigh.  She was caught unaware and it was cute but also painful to watch.  It must have been harder for Ken since he was the one actively assisting the needle process by holding her down.

She is also starting to grip at clothes and sleeves.

She’s starting to sleep longer stretches at night!  For the past few days, she slept from 9 ish pm to 1 am quite well without waking up.

I'm a stenographer, foodie, avid traveller, and new mom who loves to share her experiences with the world.
View all posts by stenoodie →
This entry was posted in Motherhood and tagged 9 week baby updates, Breast milk for baby, Breast milk stored in the fridge, Markham mom blog, mommy blogs, pumping breast milk journey. Bookmark the permalink.