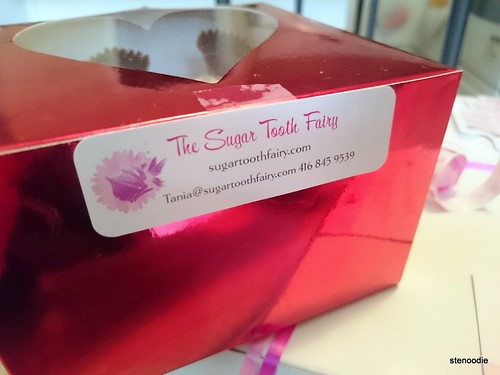 When I first received an e-mail from Tania, owner and operator of The Sugar Tooth Fairy, I was very excited!  Tania owns her own cupcake business where she prides on creating cupcakes that defy most dry cupcakes and includes the unique aspect of having liqueur-infused cupcakes!  I had never heard of this concept before but do remember seeing cupcakes on Instagram that had pipettes sticking out from them!  I was very honoured and excited to be able to taste the cupcakes that The Sugar Tooth Fairy makes and review them on my blog!

As a disclaimer, even though I received these cupcakes as a complimentry gift, I do make honest remarks about anything I receive. 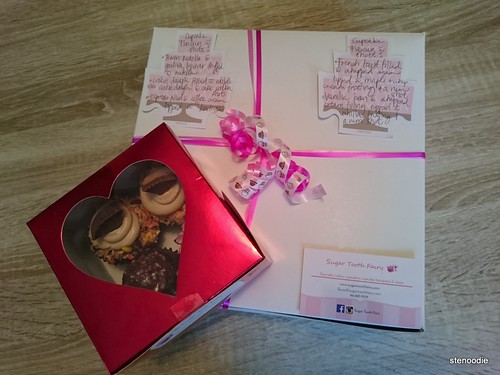 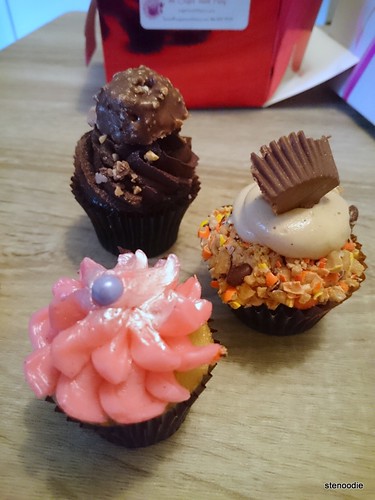 I took a quick look at the creations and flavours that The Sugar Tooth Fairy specialize in on their website and I was very excited to try the ones that they had (such as the Matcha Green Tea love and Monkey Business) and nearly all of the chocolate ones.  I asked Tania which ones were available and she gave me a list from which I got to pick the cupcakes from.

We were able to quickly establish a time and place to meet up so that she could deliver the cupcakes to me.  That morning, I got to meet Tania and she surprised me with not only the cupcakes that she promised me for reviewing but since she was on her way to deliver birthday cupcakes, she also gave me a bonus of four mini cupcakes.  It was great to chat with her briefly and I couldn’t have been more happy to start the day off with some great cupcakes! 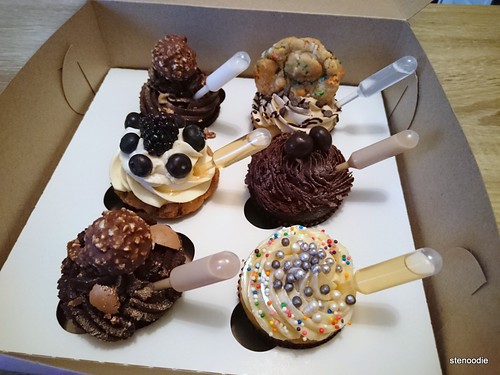 Half a dozen of liqueur-infused cupcakes!

First off, a photoshoot.  Just look at how beautiful these cupcakes are!  They are so cute with the little pipettes sticking out of them too!  The packaging and presentation are fantastic. 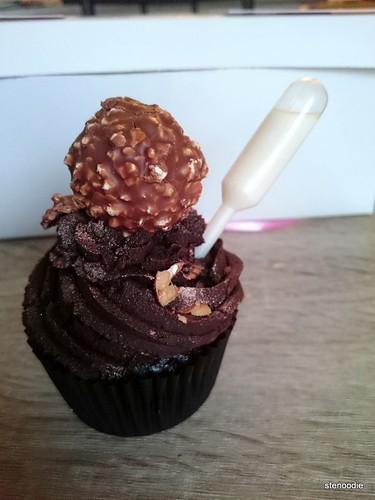 I started off with the favourite that Tania recommended:  The Ferrero Nutella with godiva liqueur stuffed with nutella.  Wow, this was so rich!  I absolutely loved the texture and consistency of the cupcake since it was moist and rich in flavour.  The Ferrero chocolate at the top was a nice treat and I loved how creamy the frosting was.  This was definitely a really good cupcake!  What defined this cupcake was that the paper wrapping at the end was clean and didn’t have any cake sticking to it.  I think that Tania definitely achieved her goal of making moist and delicious cupcakes!

Before I ate the cupcakes, I actually was a bit confused on how I was supposed to eat these cupcakes.  Since I had never had liqueur-infused cupcakes anymore, I e-mailed Tania to ask.  She said that this was actually a common question and that I had either squeeze the liquor on to the cupcake at the beginning or throughout the bites or even straight into the mouth.  It was all up to you!  I tried all of these variations and found that it was such a fun way to eat a sweet treat.  The alcohol was intense for the most part and I found myself not squeezing too much liquor so that I could taste more of the cupcake flavouring.

I tried the rest of the cupcake flavours in the coming days throughout the day as I couldn’t eat all of it at once — sugar overload!  All of the cupcakes were fresh and flavourful and so moist!  I don’t think I’ve eaten such moist and tasty cupcakes before.  The cake was so soft and the cream was always unbelievably smooth and stayed soft as well.  How does she do it?  It’s hard to find frosting that doesn’t harden up after a few days! 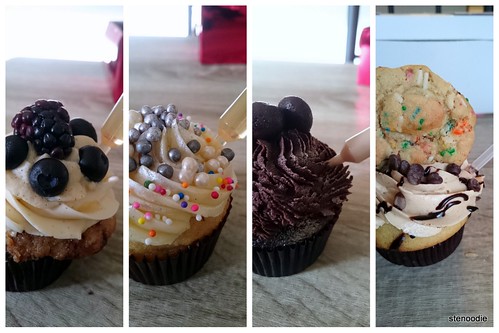 The Vanilla Bean with whipped cream was delicious in a light kind of way and the light cupcake reflected this as well!  I really liked the Cookie Dough one that was filled with edible raw cookie dough as a cookie on top!  The Espresso one had an obvious coffee bean flavour.  Yum!  Lastly, the French Toast one was also light and delicious but I didn’t detect too much of a French Toast flavouring in it. 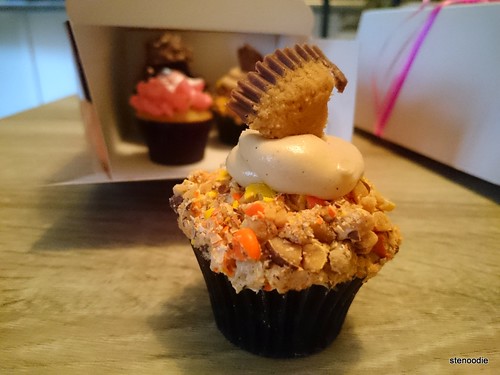 Next up, the mini cupcakes were a real treat as well!  I liked how small they were and how they also contained very soft and moist cake.  The one with the Reeses piece contained lots of creamy peanut butter frosting and tiny scrunched up Reeses as well.  This one was definitely unique!  I also really liked the one with pink frosting.  Again, I couldn’t believe how incredibly smooth the frosting was.

I was sad to finish the cupcakes since each and every one was so delicious.  It was like having a fancy cupcake feast every single time I tasted one.  Thank you so much, Tania of The Sugar Tooth Fairy, for providing me with this opportunity of taste testing your creations!  I definitely am not going to hesitate to order from you in the future so that I can share your creations with my friends as well!  Definitely worth it! 🙂 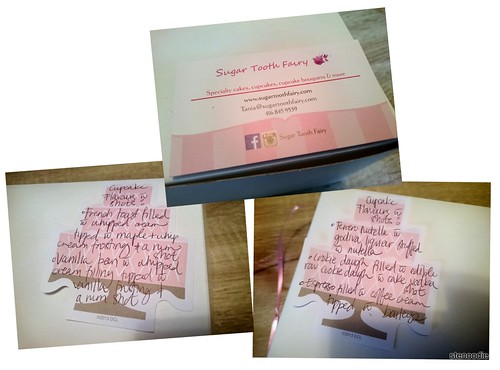 Descriptions of the different cupcakes!

FTC Disclaimer:  Although The Sugar Tooth Fairy reached out and provided me with a complimentary package, the opinions expressed here represent my own and not those of the company.