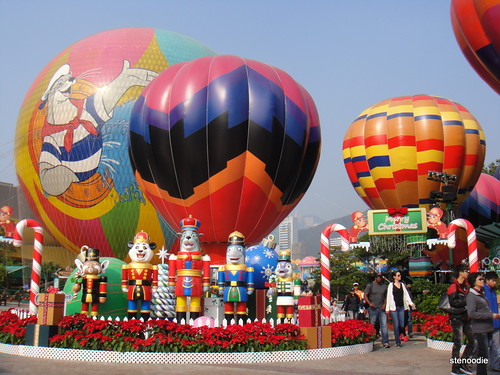 When I saw the theme and featured picture for this week’s challenge, I realized that I’ve never been to a big outdoor festival or summer gathering before.  The biggest “one” I can think of is probably when I went to frosh and we had a summer-ish concert on the last day.  Other than that, I think I’m going to have to attend one of those one day for my bucket list!  Besides that, “vivid” can also mean “graphic, evocative, realistic, detailed, lucid, striking,  impressive, colorful, rich, picturesque, dramatic, lively, stimulating, interesting, etc.” (thanks Google search).

In going through my albums, I found a picture that definitely stood out in terms of its colour scheme:  Bright, vibrant, colourful, and outstanding.  I didn’t even remember taking this picture.  This is one of those pictures where you just snap of the landscape as you are passing by as a tourist.  Michelle and I spent an afternoon here in December 2011 when we were both in Hong Kong travelling and toured around Hong Kong Ocean Park.  Since it was December, there were a lot of Christmas decorations and holiday festivities.  This was one of them.  I’ve never seen a holiday display so vivid before!

Going on a tangent, “vivid” to me actually sounded like “livid” as in “angry” or being enraged about something.  Hmm!  Imagine if that was a theme one day!  What type of picture would you choose?