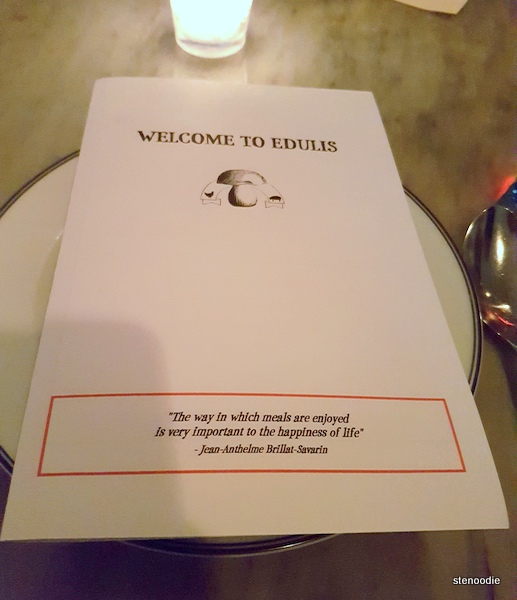 I’ve had plenty of experience with tasting menus before and absolutely love them.  I love that it’s a blind menu meaning that while you know that there will be five or seven courses coming, you don’t know exactly what the dishes will be.  This “carte blanche” menu is usually crafted around the chef’s preferences and uses ingredients that are in season.  This means that every time you go to the restaurant, the item on the tasting menu will be different.  It’s a fun and exhilarating concept and definitely for those who like to pursue the finer things in life (since these tasting menus are not cheap).

We booked a table for the three of us on this Thursday evening (we had made our reservations less than a month in advance). 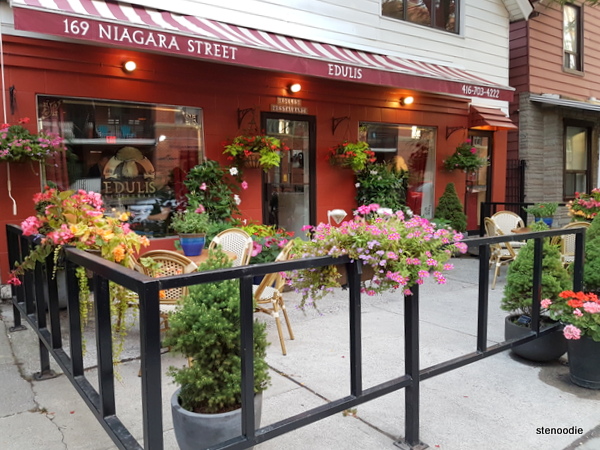 The most adorable storefront of a restaurant!

When we arrived, I was surprised to find that Edulis was situated in a small residence-like shop.  Its storefront was gorgeous with a small patio and beautiful colourful flowers and greenery surrounding it.

Inside, I was further surprised to find that the entire restaurant was very dimly lit and actually didn’t have a lot of tables for seating.  There was a bar area and another small dining room where we sat.

We were served “filtered Q” water with a charge of $2 per person.  There was also a small blurb at the bottom of their menu stating, “Thank you for not using your cell phone at the table.” 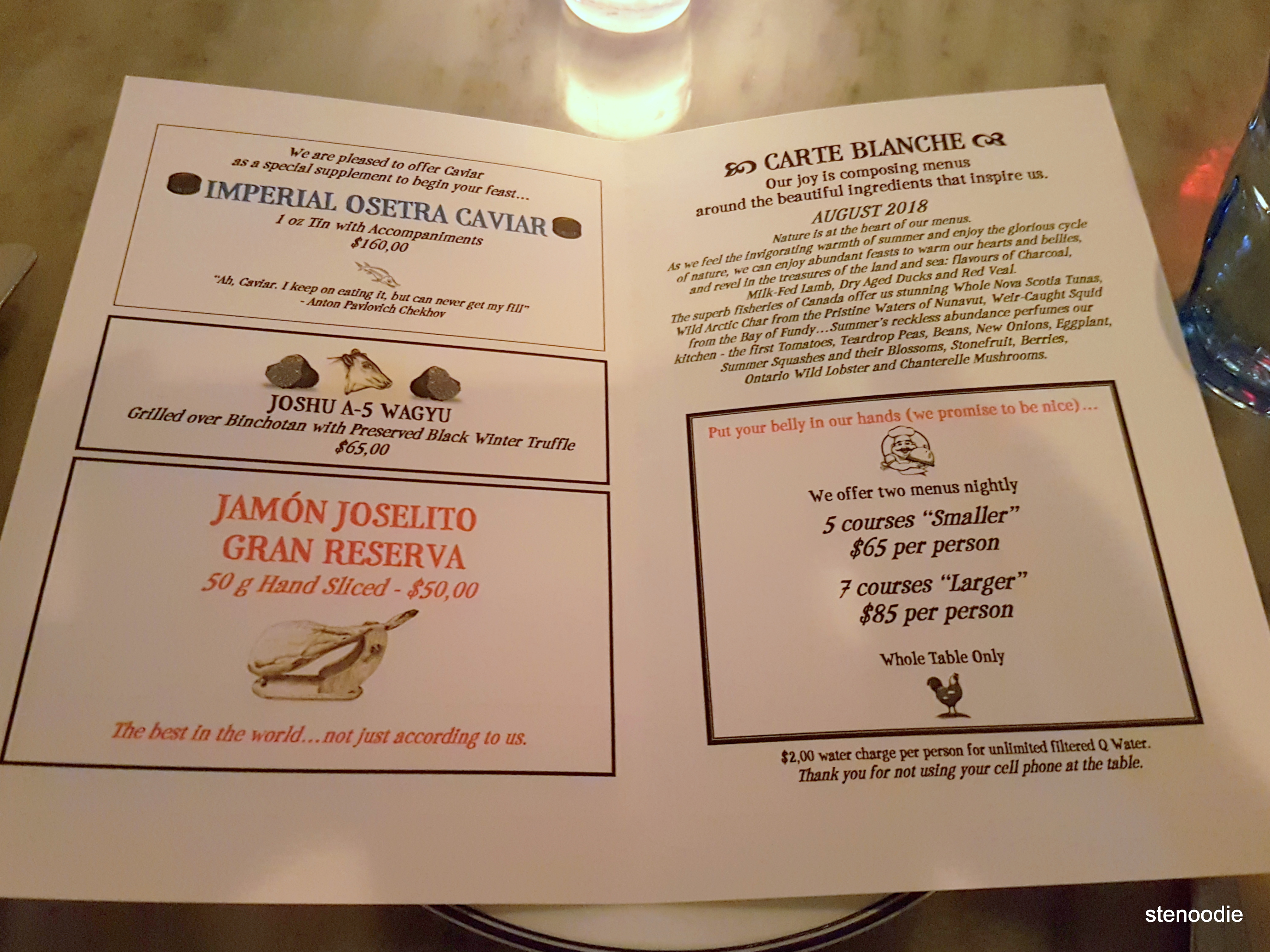 Edulis’s tasting menus are based around seafood, vegetables, and wild mushrooms, which is quite different than other tasting menus which mostly involve meat proteins.  The cuisine is Mediterranean and Spanish-influenced. 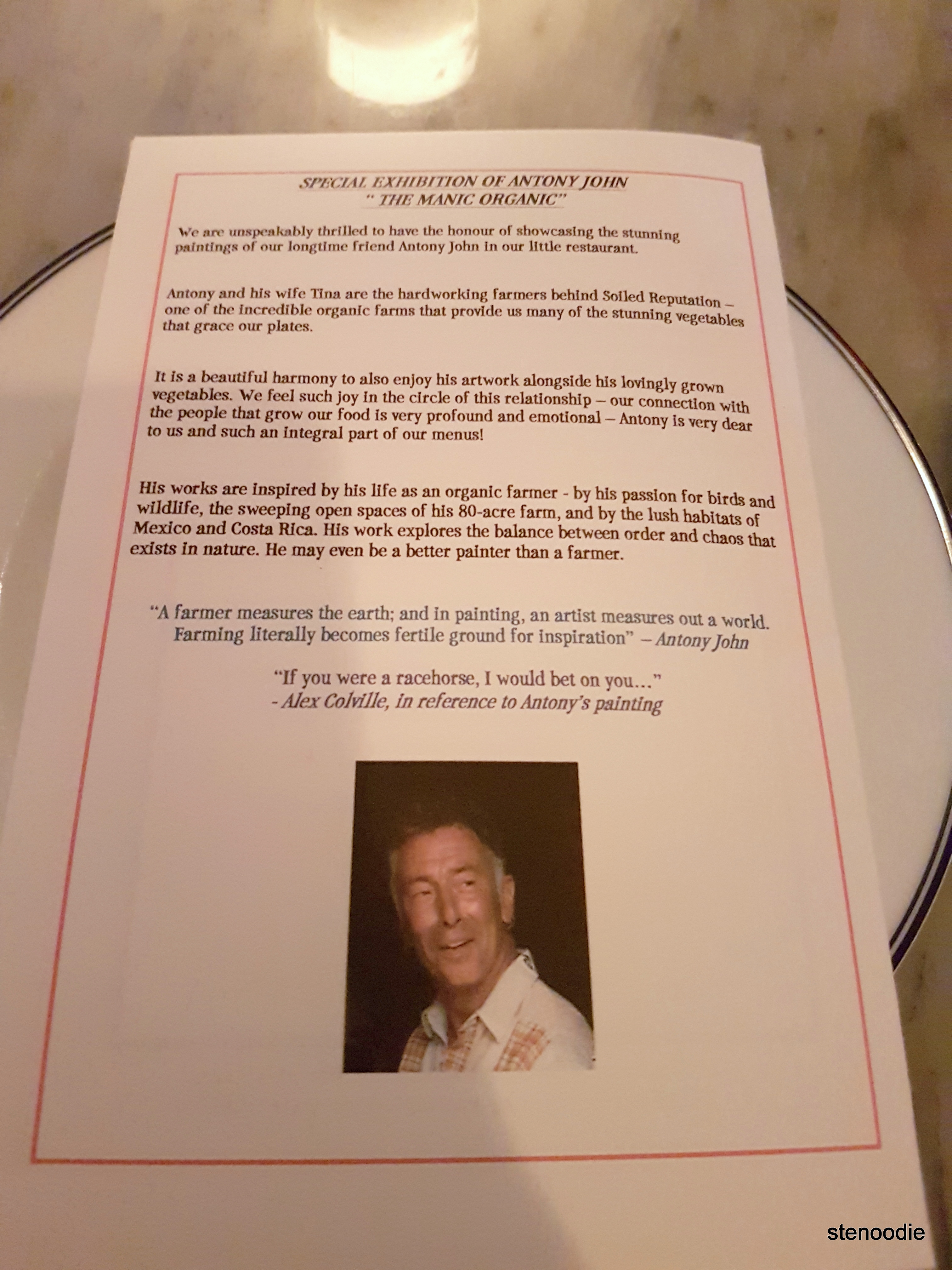 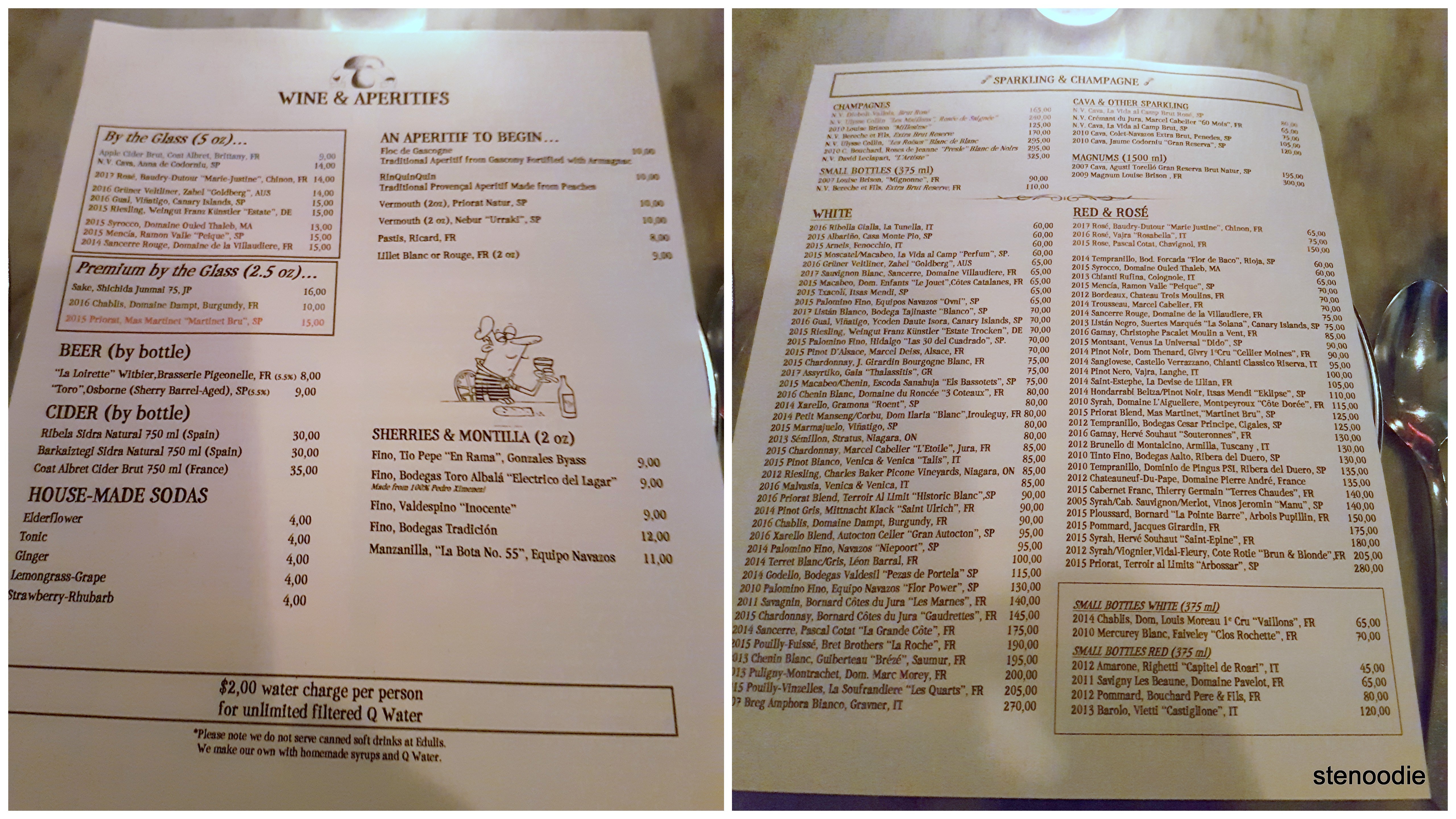 We started off with a staple, bread, that was served with a tomato paste, filtered butter, and a starter made up of a skewer of bread and anchovy-stuffed olive.  Now given that we had no menu to tell us what we were eating (they didn’t give us a menu at the end either, which some places do) and it was hard to catch the long descriptions that the server recited to us at the tables (it was also quite loud that night), I really don’t have a strong memory of what ingredients were used or what some of the things were that we ate.

Another thing that I didn’t like about Edulis is that because their lighting was so dim (candlelight only), you could barely see what you were eating (never mind wanting to take a nice photo to commemorate the meal).  All of the other tasting menus that I have experienced before have had natural or white lighting so that you could see and admire the workmanship that was put into each individual dish.  I hope this is something that Edulis can consider changing in the future.  Food also tastes better (in my opinion) when you can see it clearly and enjoy the visual aesthetics of it.

I love, love, love seeing how each ingredient is put together on the dish and it’s a shame that we weren’t able to do this for the meal that night (especially when it’s a tasting menu that’s pricier than eating out at regular restaurants, I really want to maximize my experience — the food experience is everything to me).

(Also, this is why the photos taken at this meal are all significantly colour-corrected; it was simply too dim in there to get any natural light for a good photo.) 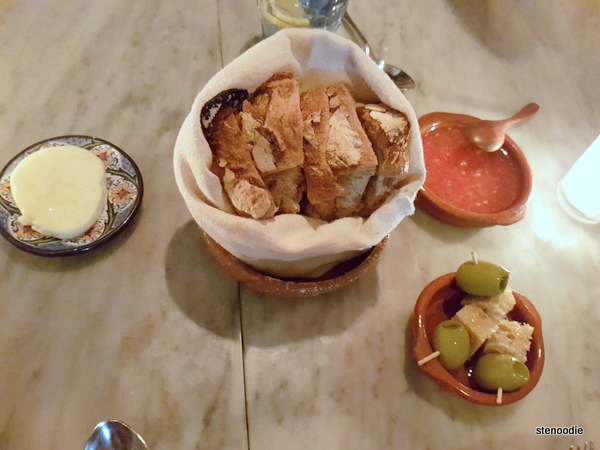 Bread as the starter

Anyway, the bread was quite all right.  It was soft and had a good texture.  The tomato paste (it had some other ingredients in it) was very, very fresh and citrusy.  The butter was very smooth and rich.

We were told to eat the skewer of bread and stuffed olive together in one bite.  Unfortunately, it was only after biting off the bread part that I realized this instruction so I actually ended up eating this in two bites.  XD 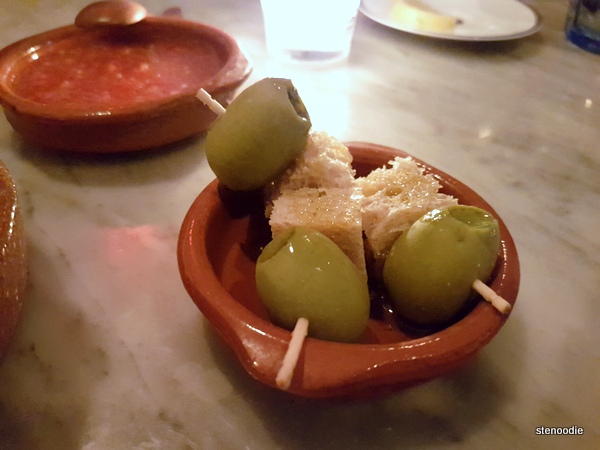 Stuffed olives and bread on a skewer

The first course we received was a cold dish of New Zealand garoupa.  It was fresh and slimy to taste and pretty good.  (I wish I could tell you more about the ingredients, but I don’t remember them XD). 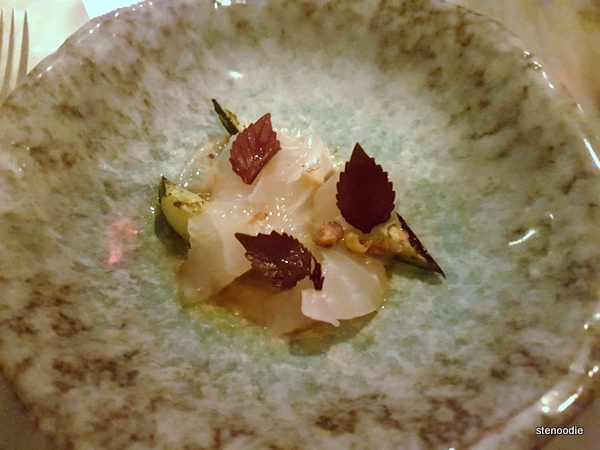 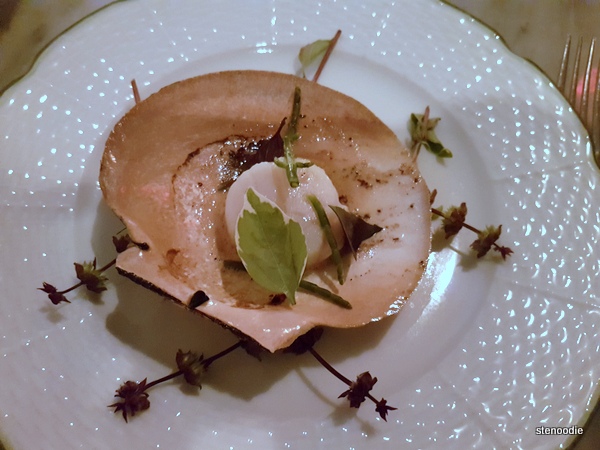 Course #2: Scallop on a shell

The second course was a scallop on a shell.  This was very fresh and the herbs around it gave it a very strong aroma.  Since the scallop was cooked on the shell, it took some digging with the spoon to get it off the shell.

(After every course, our plates were cleared and our old cutlery were replaced with new ones.  I love that because it ensures that the tastes of each course are kept separate.  Also, by observing what kinds of cutlery were placed in front of us before the next course arrived, we kind of had an idea about what was coming next.  I love the mystery and excitement of a tasting course.)

The third was a Nova Scotia lobster prepared with Saskatchewan mushroom and Ontario grits.  Mmm, this smelled absolutely amazing.  I was so enthralled especially about this one because the flavours marinated so well together.  The bisque was like a foam covering the ingredients.  This was such a delicious course. 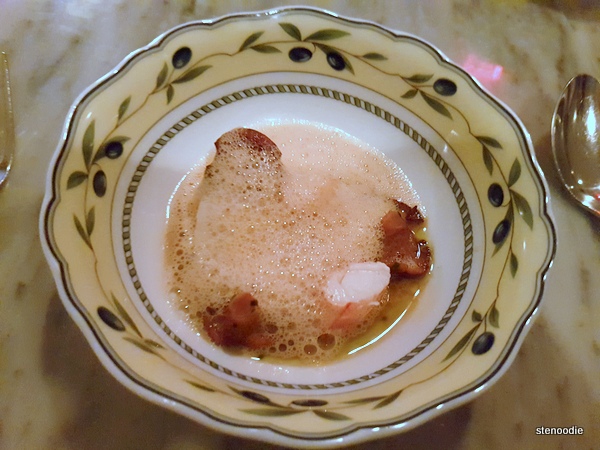 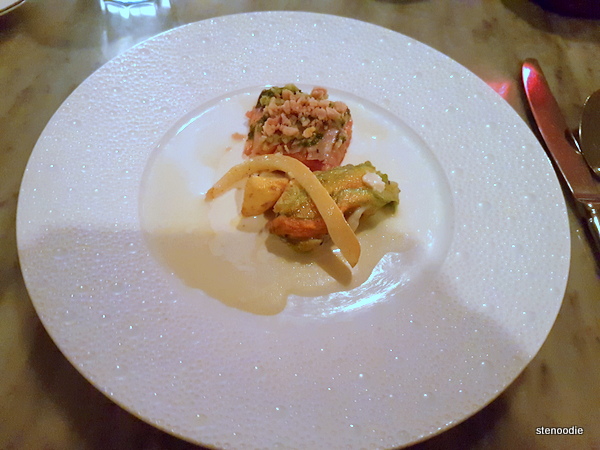 The fourth course was a slightly smoked salmon from British Columbia (I love that the dishes used products from different provinces in Canada). 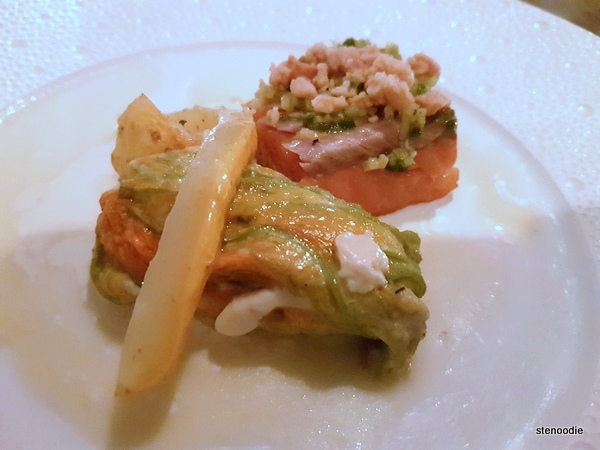 So pretty, but wish I could have seen it more in person 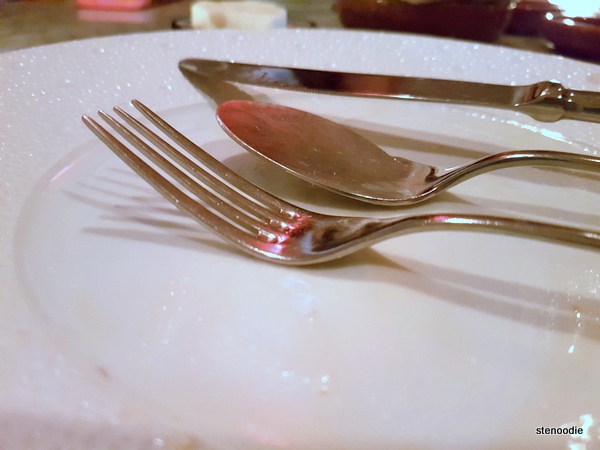 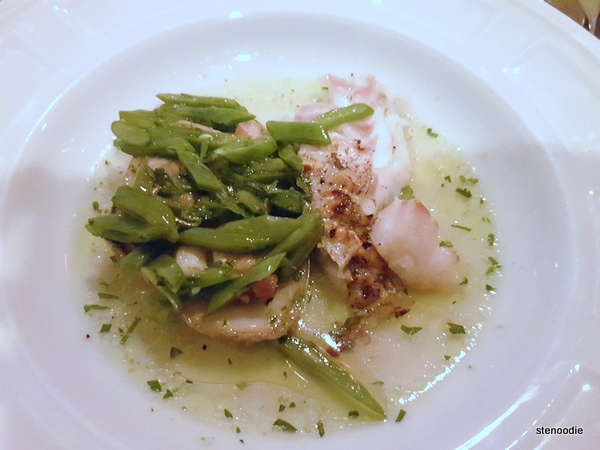 The fifth course was a hake fish and clam.  The snap peas covered the clam completely so you can’t actually see it in the photo.  The hake fish was something new to me, but it was very well cooked so that the meat came out in flakes and tasted good.  The clam was sizable and also had to be dug out from its shell on the dish.  I was surprised with the portion of this dish.  It seemed that the courses were getting bigger and bigger.

The sixth course (the last savory one) was a breed of a slow growing Ontario chicken.  One of our friends preferred not to eat any dairy, so her dish was substituted with rabbit (if I’m not mistaken).  I tried a bite of it and it seemed nothing really out of the ordinary from other rabbit meats I’ve had before. 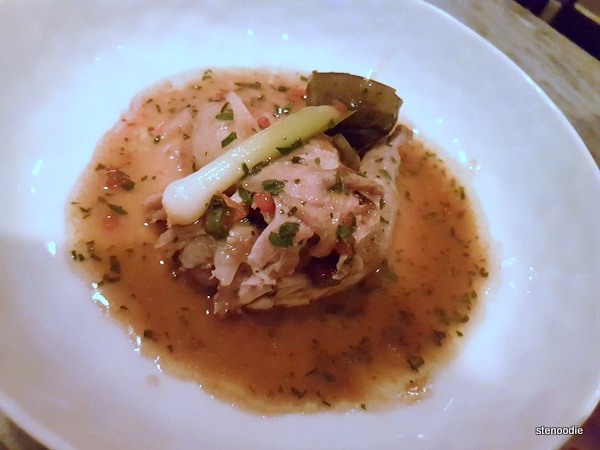 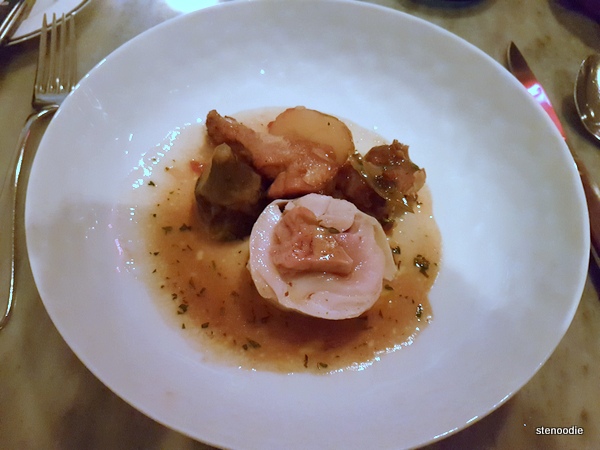 The chicken course was gigantic!  By this point, we were close to getting full and I couldn’t believe this large portion of food.  I was also surprised that we received a meat dish at all — I thought that the entire menu would be of seafood.  We received a leg and chicken breast part of the chicken.

The chicken breast was actually stuffed with foie gras!  This was unexpected as well (and further added to the fullness of my stomach at this point).  The foie gras was just okay.  I wish the vegetables that complemented this dish were more of the refreshing variety as I felt there was too much heavy protein in the dish.  Although I felt so full already, I had to finish this dish.  There was no way I was going to let this tasting menu go to waste…

The chicken breast was tender and smooth while the chicken leg was more ordinary in taste.  This was the most disappointing course of the whole night because it was such a less-than-stellar course.  The sauce was also too salty (something I didn’t expect to see in a fine dining restaurant.) 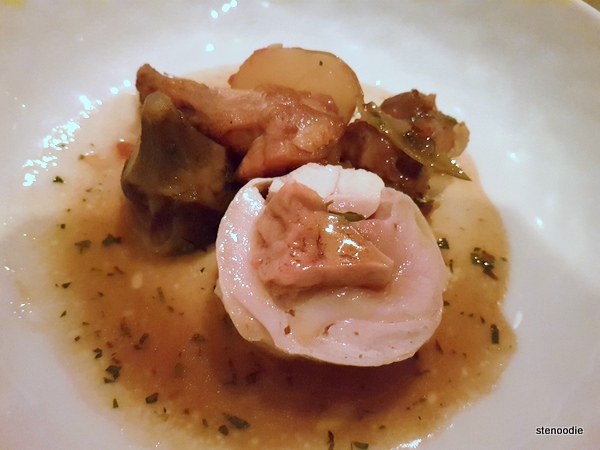 This was overly salty for my taste

Before the dessert was served, we were asked if we wanted to see the cheese menu.  I took a look at it out of curiosity and was impressed that they served so many types of cheeses. 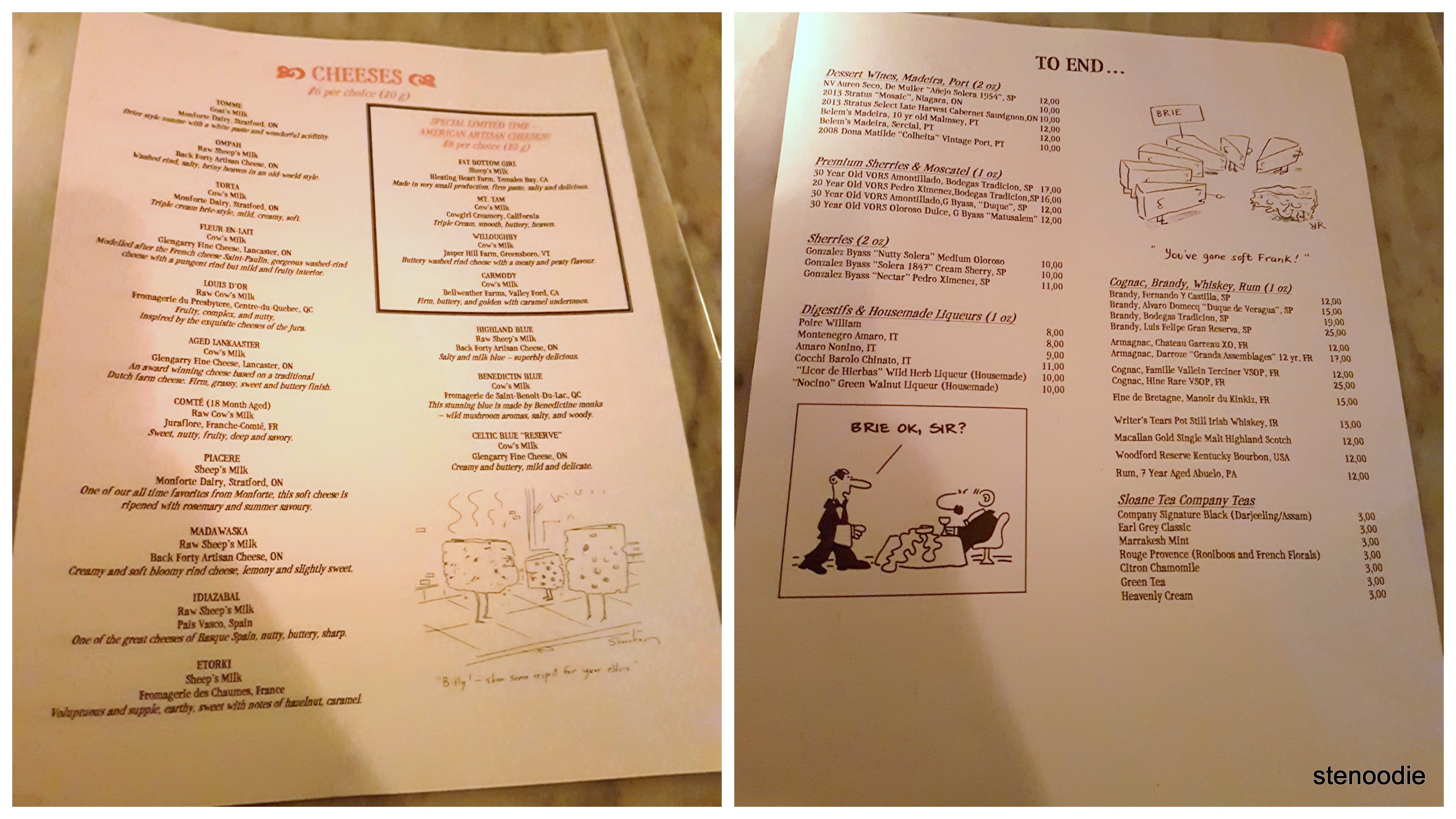 The seventh and final course of the night was the dessert.  This was a nectarine sorbet with mulberries.  The sorbet was made into a quenelle (I love how quenelles are always so fancy-looking).  It was a refreshing sorbet and slightly sweet.  The mulberries were so fresh as if they were just picked right off the tree. 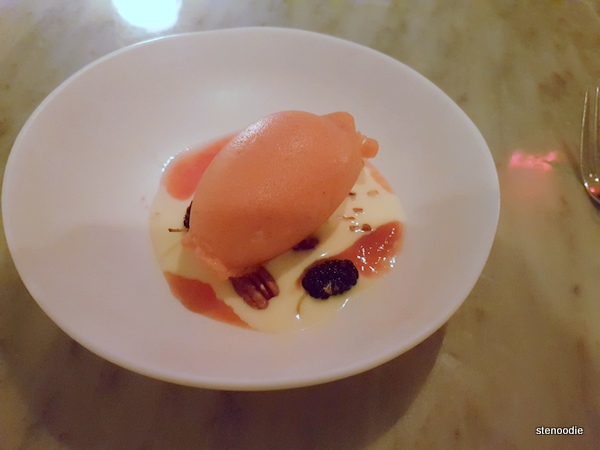 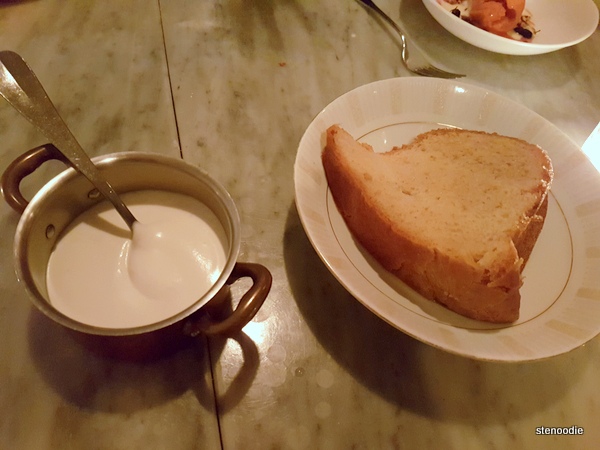 We were surprised with a bonus dessert.  This was baba au rhum, a small yeast cake saturated in syrup made with hard liquor and in this case, it was rum.  It was served with some chantilly cream on the side as well.  When the server brought it to the table, she asked if she wanted any extra rum on the cake.  We weren’t sure so we said “Sure, why not.”

When we tasted the rum cake though, we found out that we really didn’t need the extra splash of rum.  The cake itself was already saturated with rum.  Thus, it became way too soaked with rum and didn’t taste good. 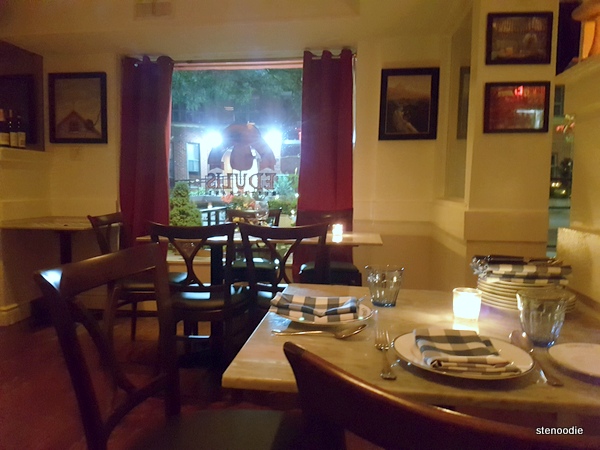 One of two dining rooms at Edulis

I’m glad that I was able to try out the tasting menu at Edulis.  I had heard interesting reviews about the restaurant and I have to say that I have had much better tasting menu experiences elsewhere at other fine dining restaurants (namely, Alo, Canis, Doma to name a few).  I also found that the service lacked a bit of professionalism and friendliness from our female server.  (The male food runner was great, however.)

Edulis is currently ranked 9th on Canada’s 100 best restaurants, but after this experience, I fail to see how they achieved that spot.

(They were actually ranked 1st place on the Best New Restaurant in Canada category six years ago in the 2012 EnRoute Magazine.)

Hopefully other diners who come here have a better experience than the one I had.