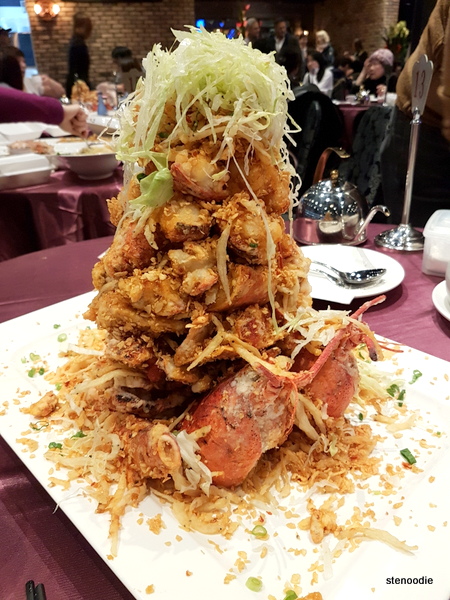 March 9, 2018:  For my mom’s birthday this year, we celebrated at the new location of Fishman Lobster Clubhouse (魚樂軒).  I had been to their Scarborough location at Steeles Avenue and Silver Star Boulevard many years before this (that blog post is here) and remember fondly the gigantic seafood mountains that we enjoyed.  Recently, Fishman Lobster Clubhouse has relocated from that location and moved to the intersection of Kennedy Road and Finch instead.

We called ahead of time to book a table and the only slot they had was a 6 p.m. or 8 p.m. on a Friday.  Luckily just as we were contemplating the 8 p.m. time slot, the staff on the phone said a 7:30 p.m. was available so we took that one.  Yay!  (Reservations are a must here if you want to ensure getting a table.)

I was so excited for the lobster feast! Ken and I had viewed the menu previously so we knew already which lobster fest combo we wanted to order. 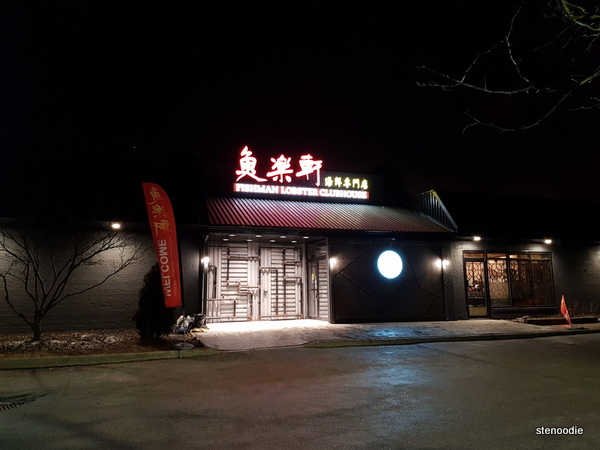 They have lots of parking in the back 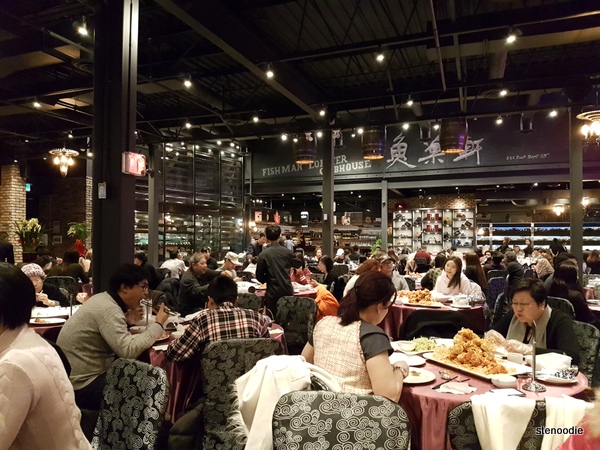 Upon arriving early at 7:10 p.m., I was so impressed with the large square footage of the restaurant!  Apparently they had combined the two previous restaurants that used to be there and renovated it as a new bigger space.  It was so nice in there!  They were able to seat us right away too which made me think they weren’t as booked fully as they seemed to be when we had called them on the phone.

The name of the restaurant printed in a chalk-like design in an area near the rafters made it appear so modern and hip and unlike most Chinese seafood restaurants.  They really tried to cater to the young folks, I could tell!

Another thing that visitors will notice are the large seafood tanks lining the three of the four walls of the restaurant.  It was like a lobster city!  The sheer of number of tanks they had were incredible. 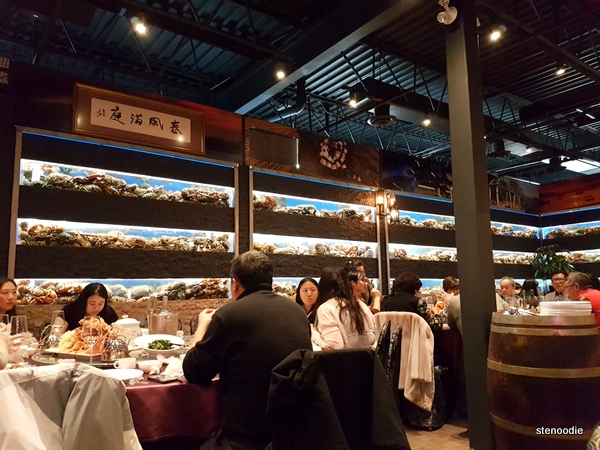 Look at all those tanks full of lobster 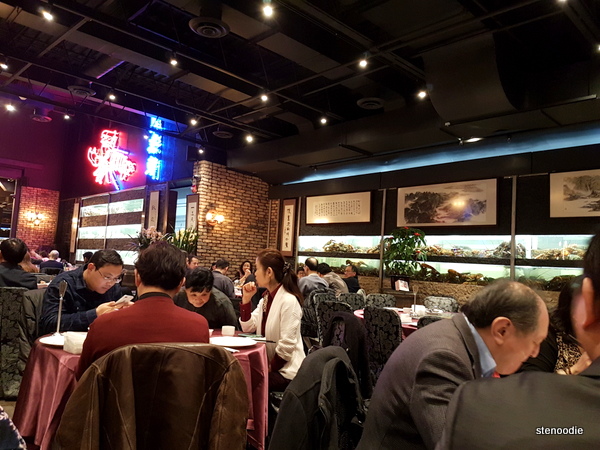 So many lobster tanks!

I liked the long narrow spout teapots that were on the table.  It made pouring out the hot water so precise (fun). XD 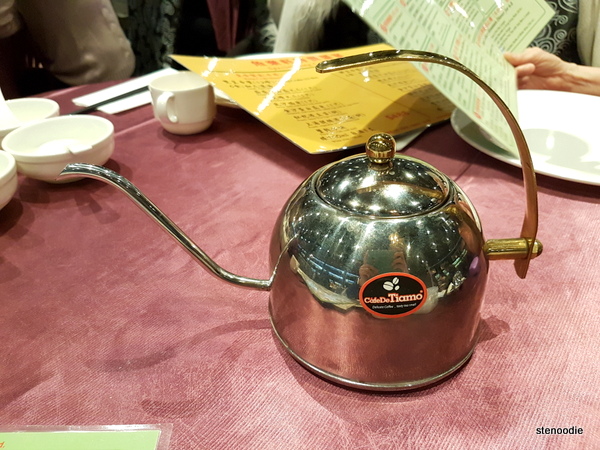 What a cool teapot!

Another thing I noticed that was unique about Fishman Lobster Clubhouse was that nearly every table around us already had a platter of large fried lobsters.  I mean this is usually a standalone highlight dish for an ordinary restaurant so to see it presented on every table was mind-blowing and it goes to show how everyone was here for those infamous lobster mountains. 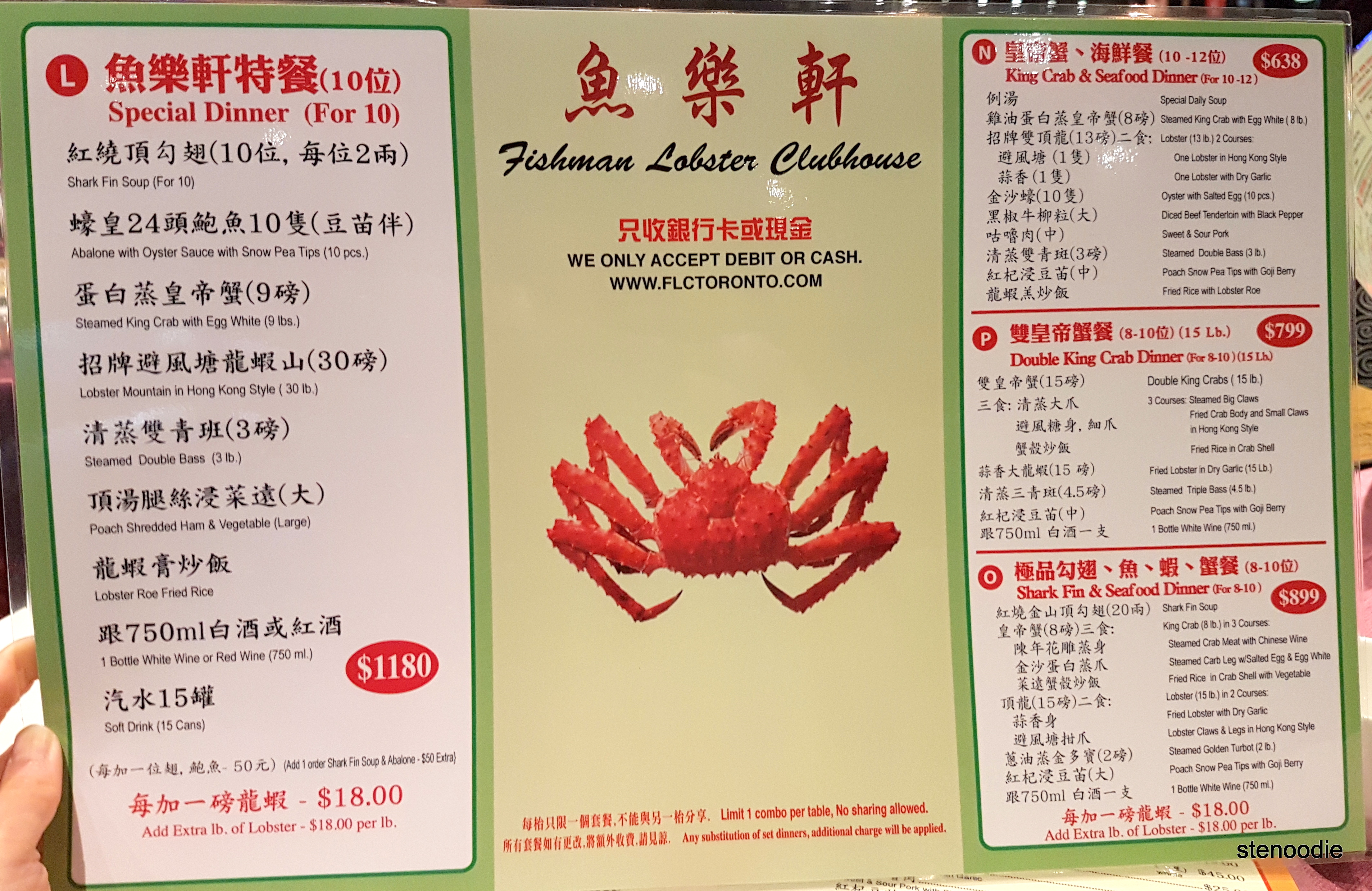 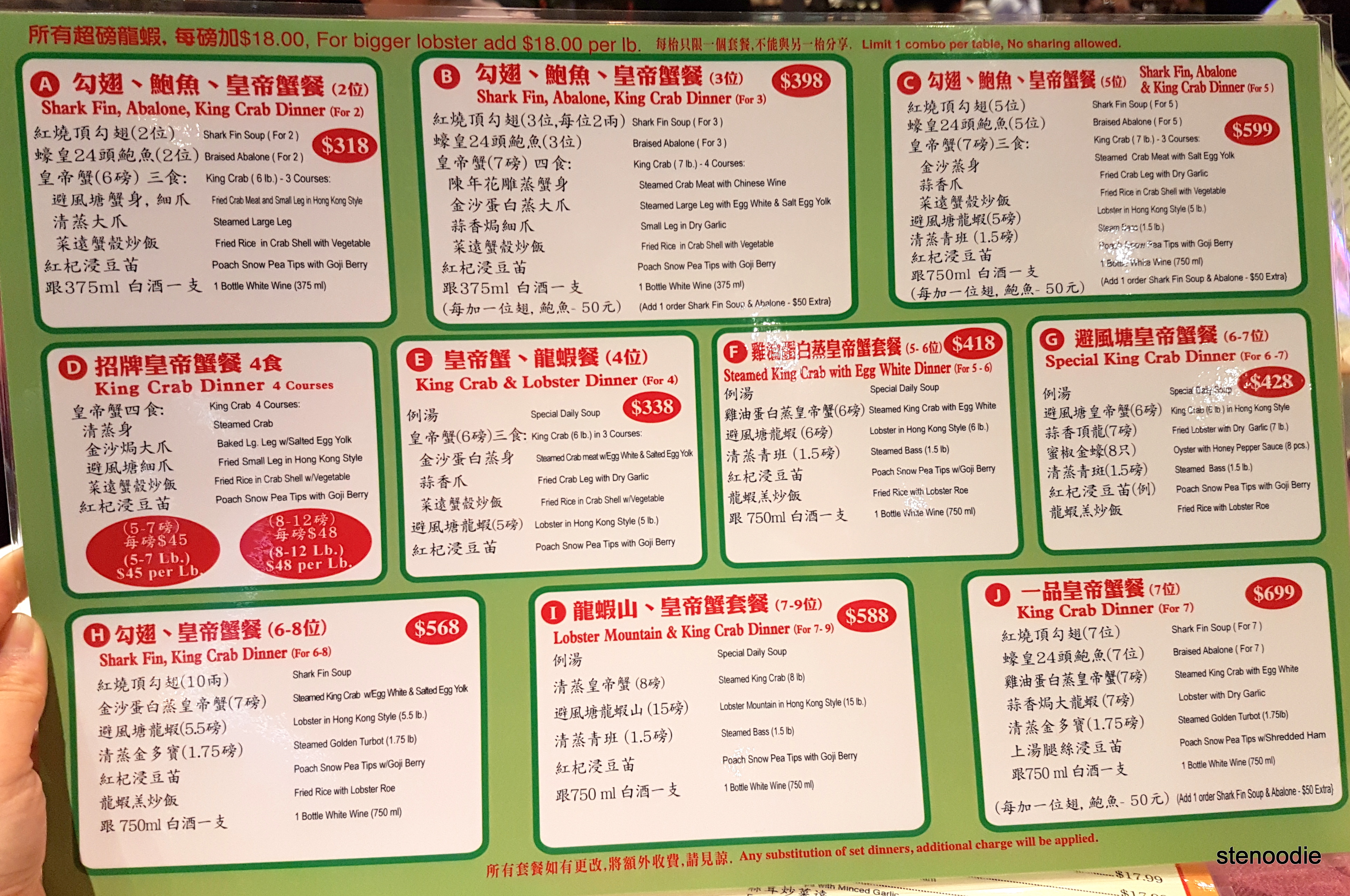 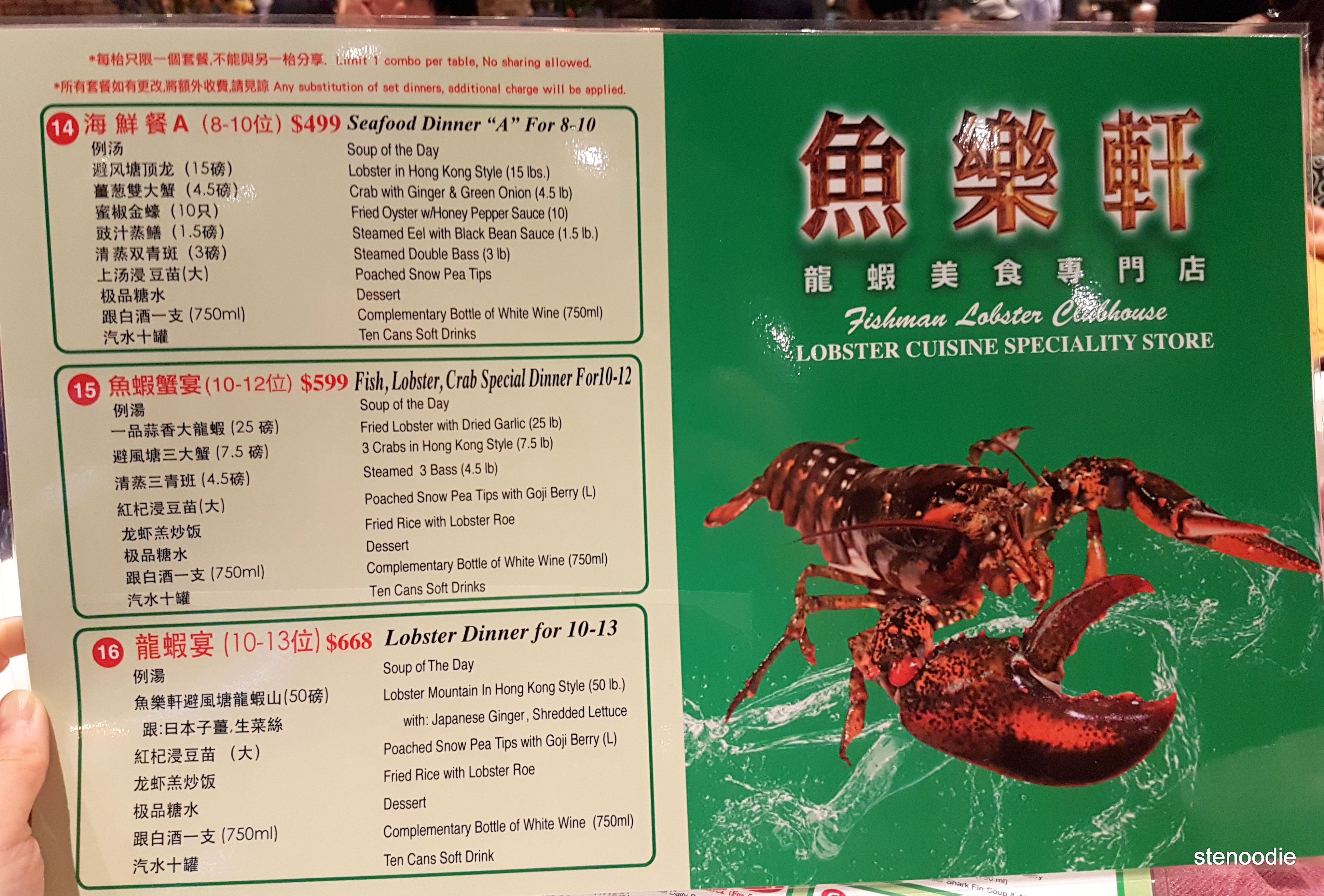 Menus for 8 people and up 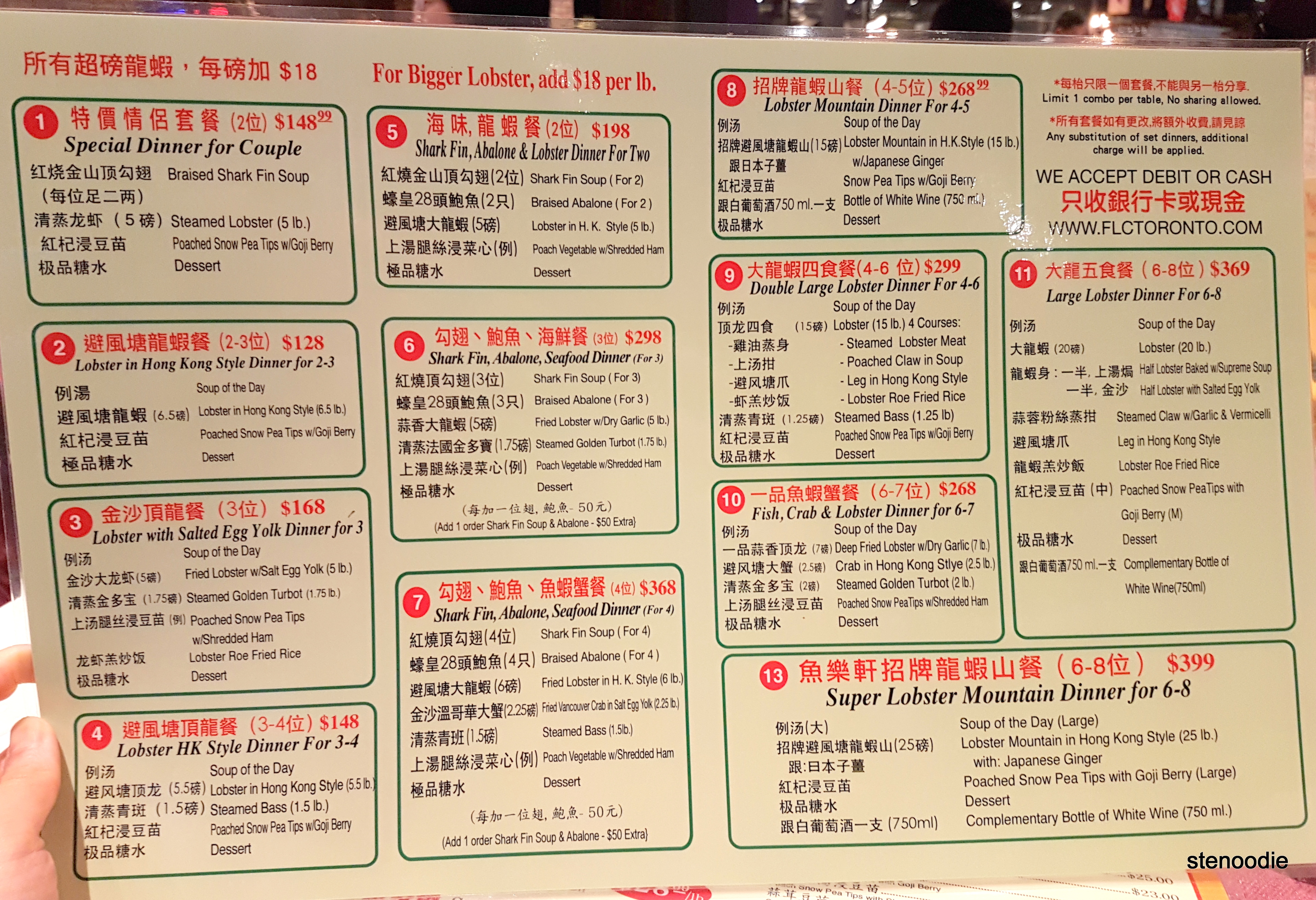 Menus for 2 people and up 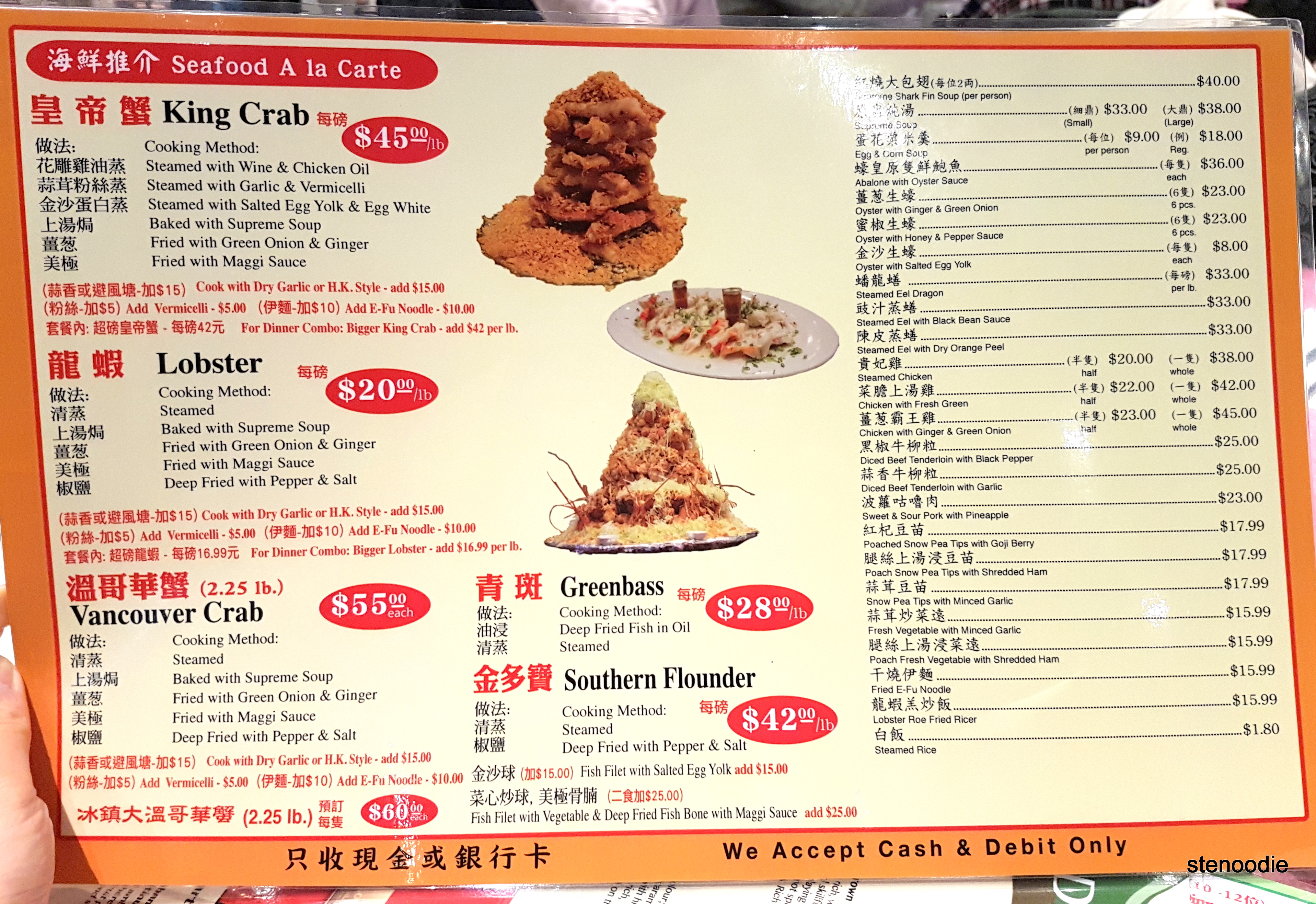 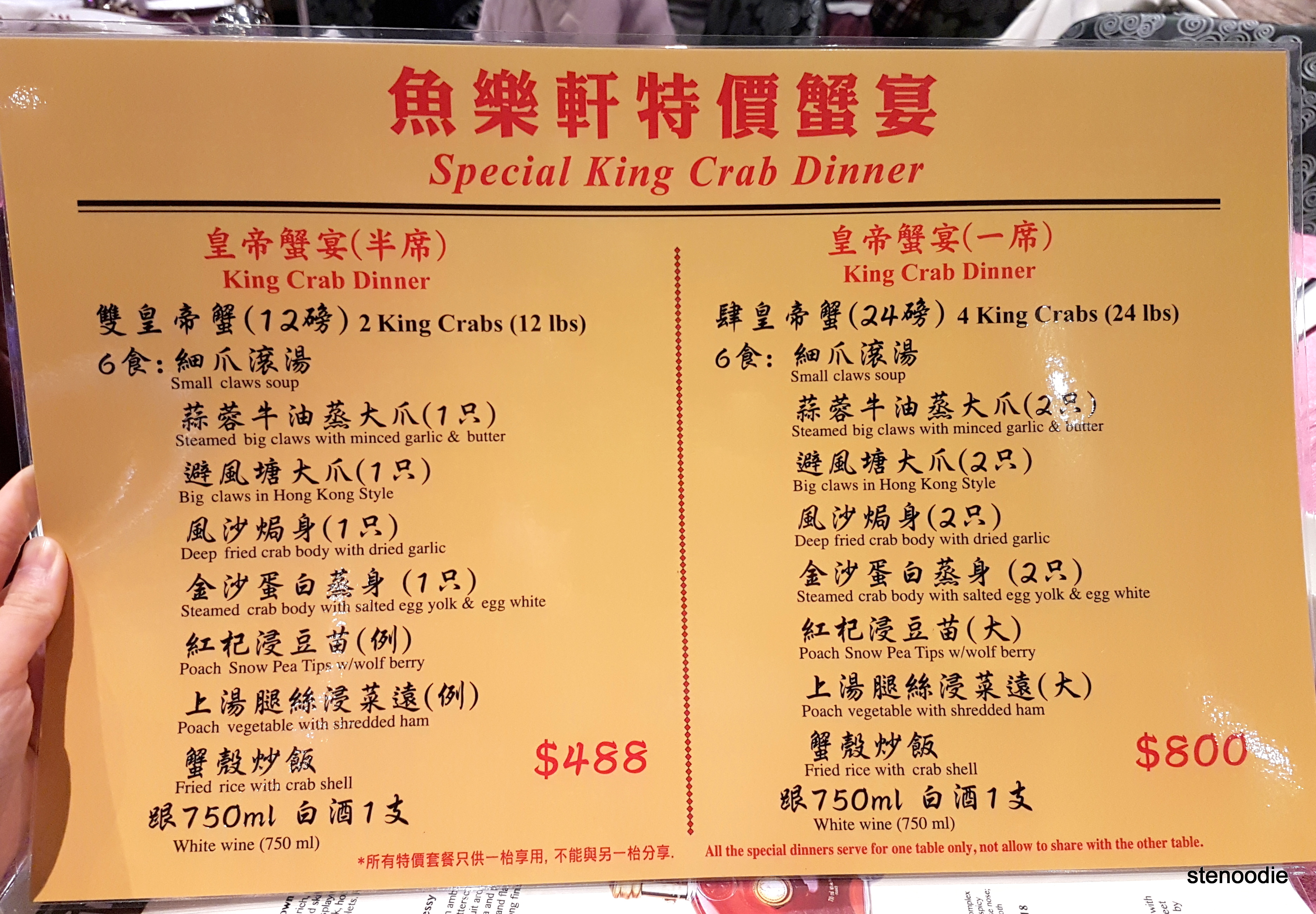 It didn’t take long for the soup to arrive.  I liked the presentation of the soup bowl.  The soup of the night was a braised black chicken soup which was very good. 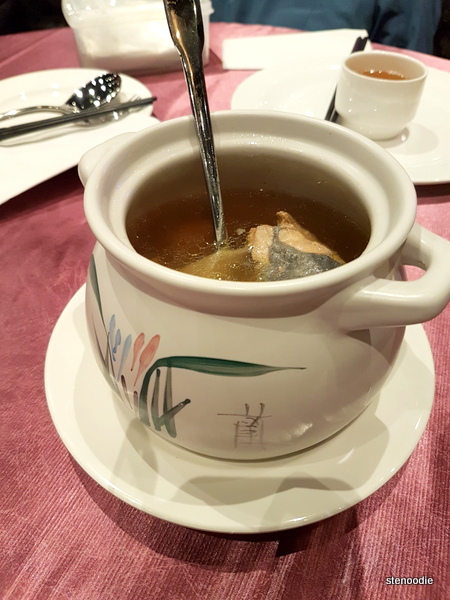 Soup of the day

The server came to our table to inform us that they didn’t have a 6.5 lbs lobster on hand but had two smaller lobsters weighing a combined weight of close to 7lbs. We were shown the two lobsters in a bin to us.  If we were keen on a single big lobster, the next size would be a 9 lbs.  A nine pounder was obviously too big for the three of us to eat, so we settled for the two smaller lobsters. My mom did want a bigger lobster in general since the meat for such a lobster would offer bigger bite sensations but our hands were tied. 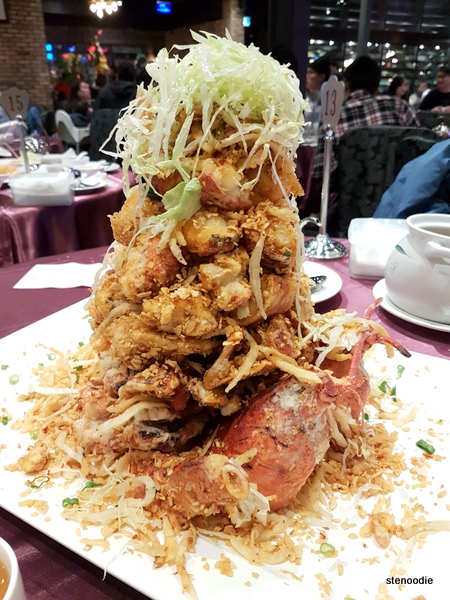 Very soon, the star of the show arrived!  Hong Kong Style lobster (避風塘) means that it’s fried with little fried fish, fried garlic, and green onions.  Its signature look is to style all the lobster pieces into the formation of a tower!

After the must-take photos, we dug into the scrumptious tower.  There were plastic disposable gloves available in a box on the table too, but I’m really not an advocate of these single use plastics when you can simply use your hands and wash them.  Even when using plastic gloves, the shells sometimes puncture the gloves and your hands will still be soiled regardless.  Anyway…

The taste of the lobster was delicious!  I loved that each piece was still steaming hot from the fryer.  It made me wonder how they were able to retain the high temperatures but still skillfully manually putting together the tower formation quickly enough to serve to the customer.  The fried fishies were delicious too and addictive like chips — you can’t eat just one.

The Poached Snow Pea Tips with Goji Berries was stacked also in a mini tower. XD  It was a standard good-tasting veggie dish.  We ordered a bowl of rice to share as well. 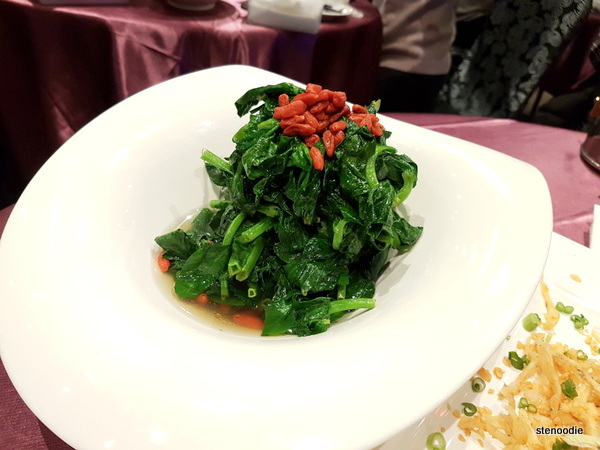 Despite our best efforts and overindulging my stomach with as many lobster pieces as I could, we couldn’t finish this massive tower and packed up the rest for a feast at home later that week.  (Don’t forget to pack up the little fishies and fried garlic too; they’re delicious.) 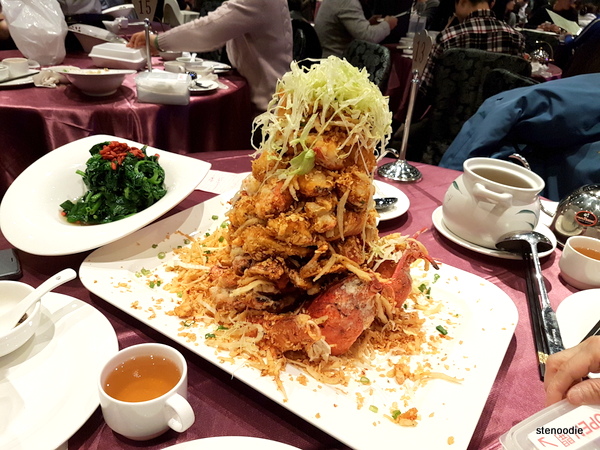 You see, lobster is the main star

We got the dessert of the night too which was a smooth almond pudding.  It was yummy! 🙂 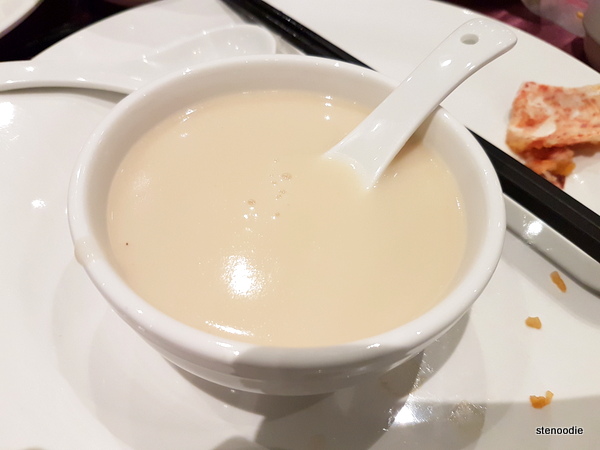 I can’t wait to return again for more lobster towers.  It was delicious! 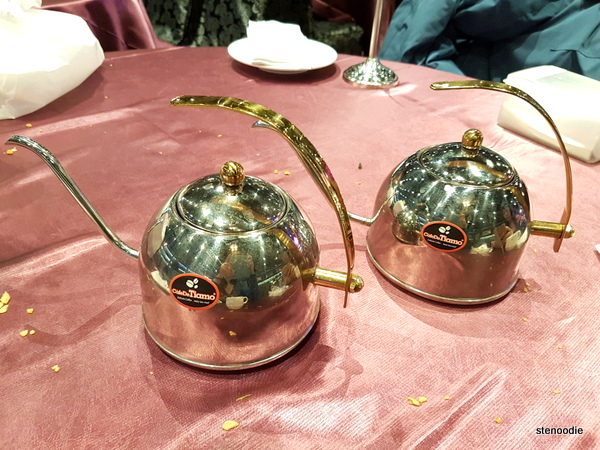 The service here was also very good for a Chinese restaurant as in they were professional and courteous.  I did notice that the table of two next to ours waited an awfully long time for their food to arrive so much so that they complained and had to order a bowl of white rice first to eat because the female diner had to take her medication with food at a specific time.  I felt bad for them because in comparison our dishes had arrived so quickly.  Other than that, the tables were spaced nicely around the restaurant so it didn’t feel cramped and I liked the overall atmosphere of the seafood restaurant. 😀 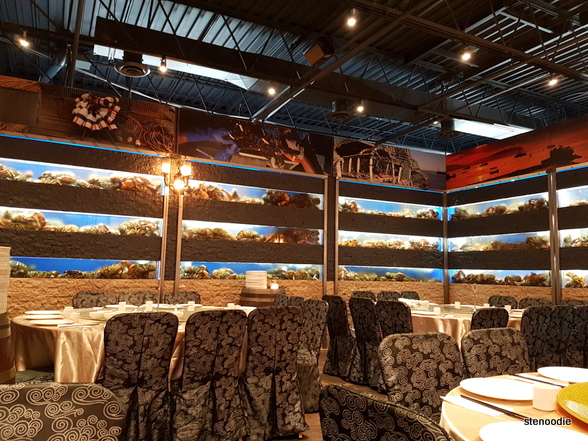 Rows upon rows of lobster tanks

October 4, 2018:  We returned again to Fishman Lobster Clubhouse Restaurant for another birthday celebration!  This time however, we returned for a weekday lobster lunch since it was a tad cheaper than dinner (and plus, it’s better to eat a large seafood meal during the day and have more time to digest than during the evening meal). 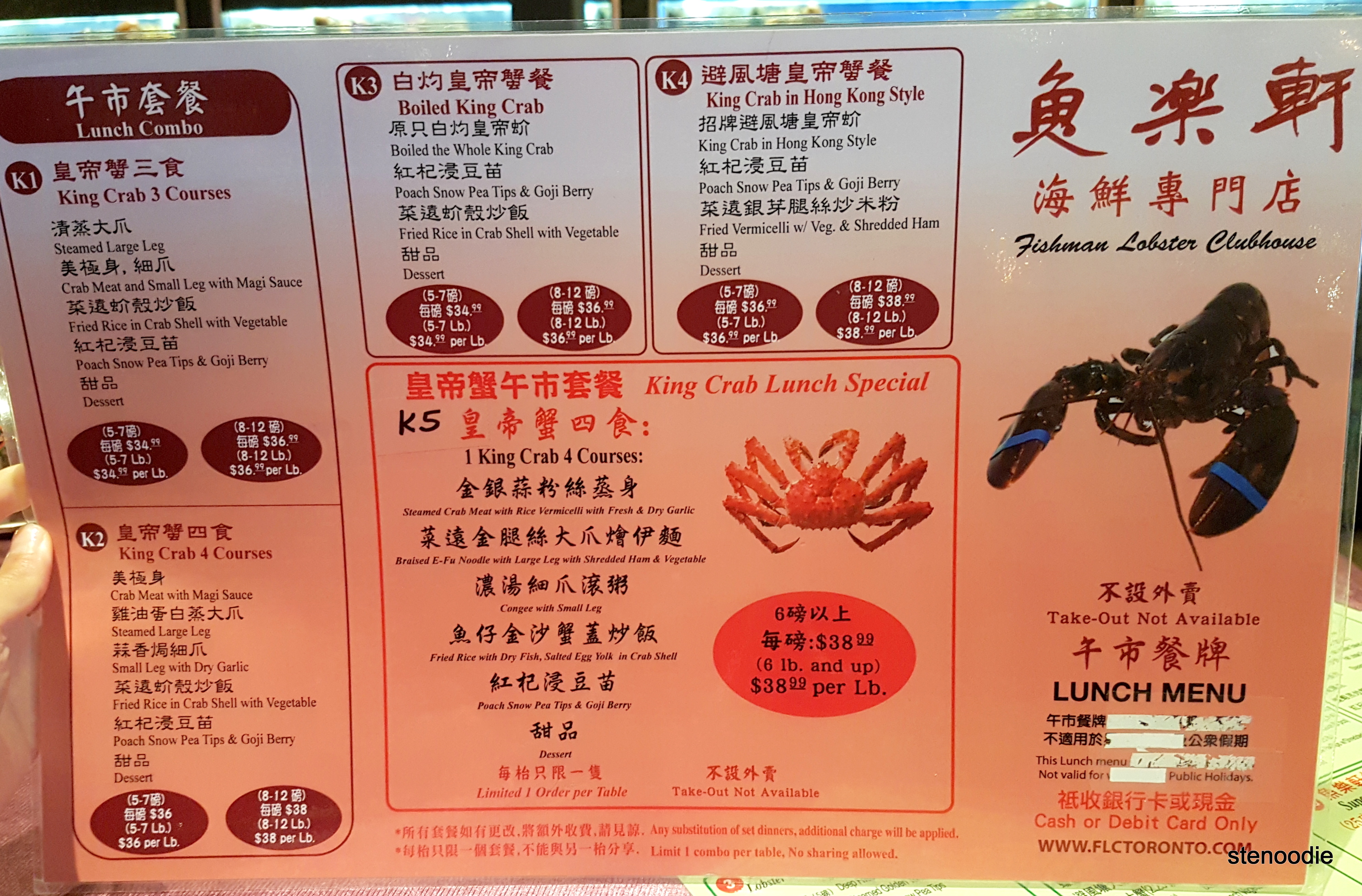 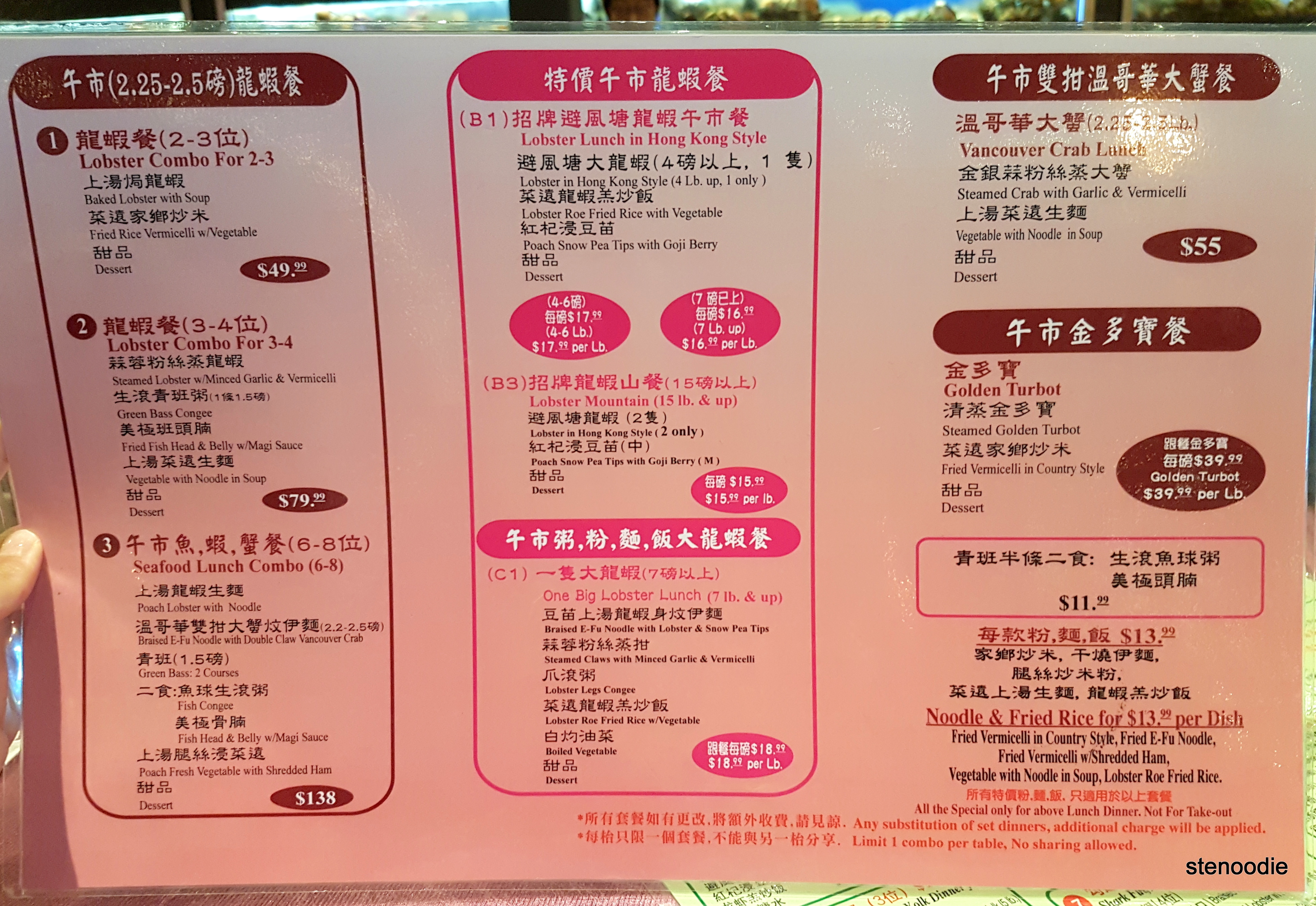 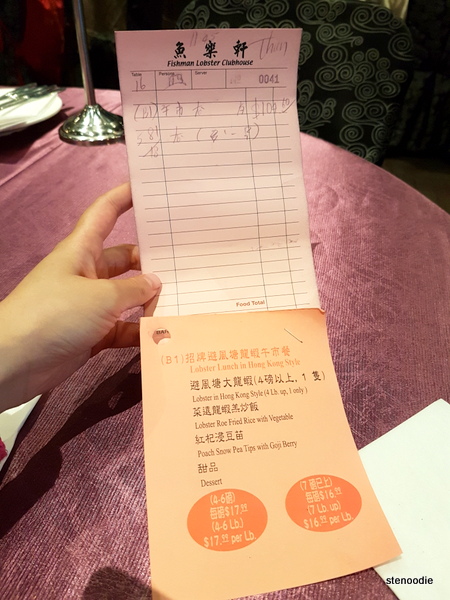 We ordered the B1 Lobster Lunch in Hong Kong Style, which contained a 4 lb minimum lobster in Hong Kong style, Lobster Roe Fried Rice with Vegetable, Poached Snow Pea Tips with Goji Berries, and dessert of the day.

Just like last time after we were seated and placed our order, our lobster was brought to us live to be assessed first before it was brought back to the kitchen to be cooked.

Four pounds was the minimum order of a lobster for this lunch special, and our lobster ended up to be 5.18 pounds which was reasonable.  (You’re essentially paying for just the weight of the lobster, and then all of the other dishes come with the combo.)

The lobster mountain was just as impressive as last time.  This time however, the crispy fried smelt was replaced with French fries.  The French fries were still good, but I preferred the fried smelt. 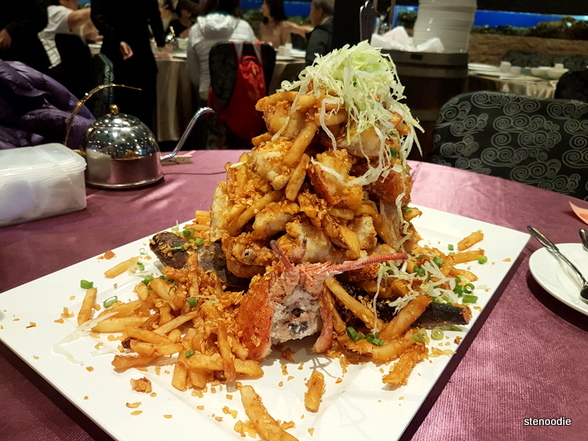 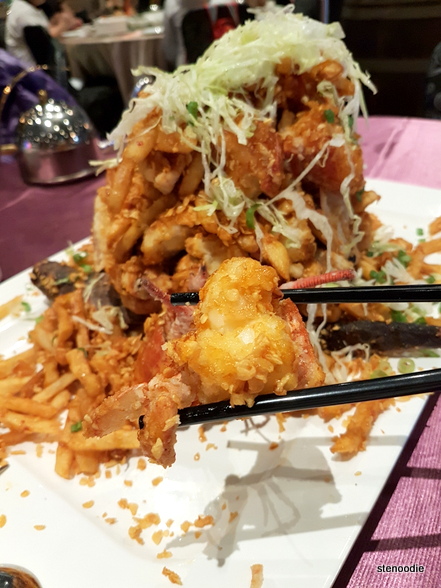 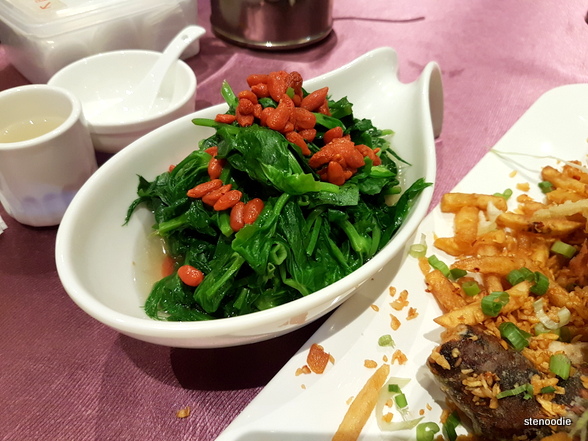 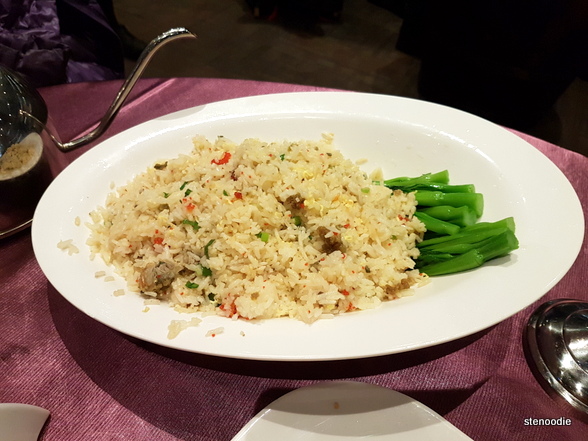 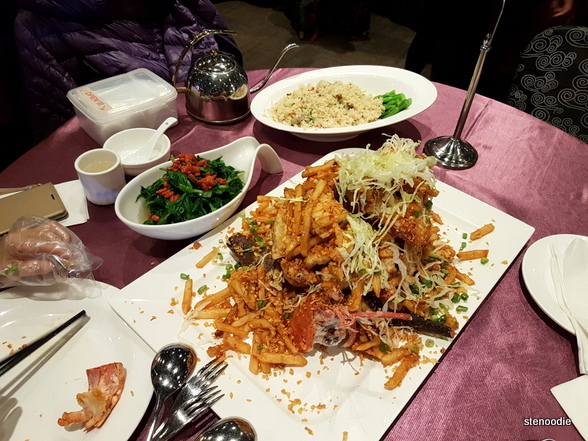 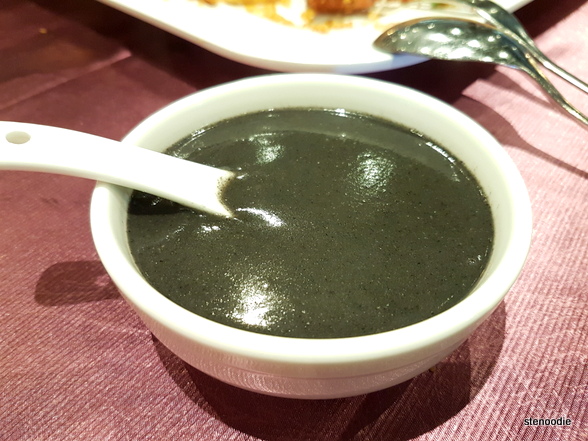 Everything was just as delicious as last time, and we definitely had leftovers again.  We brought our own Tupperware to pack the leftovers home (it’s better for the environment to reuse containers). 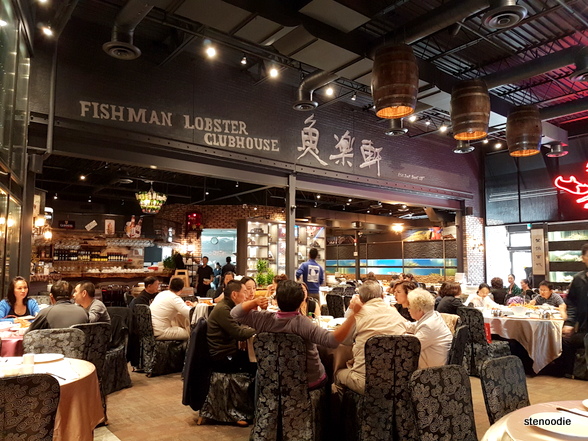 So many people even here on a weekday! 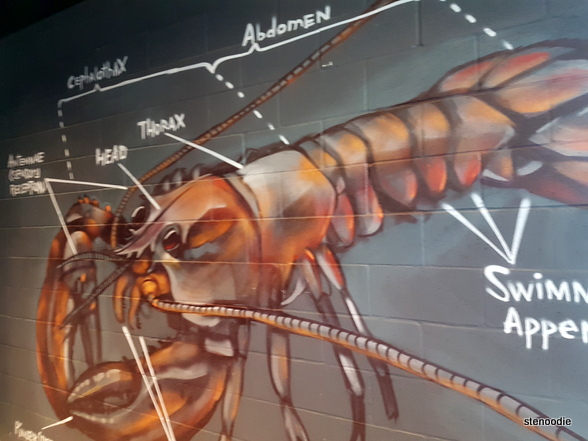 Lobster mural near the back entrance