Dinner at Sushi Cove in Woodstock 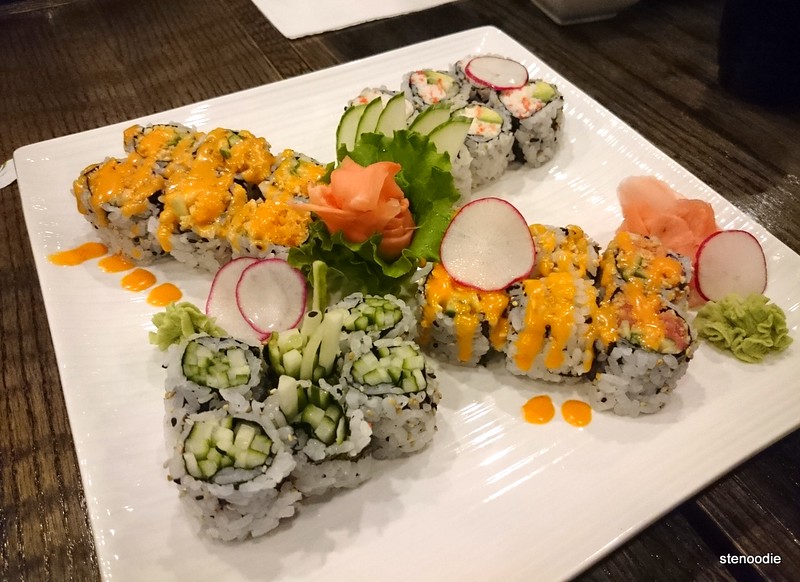 I recall this experience of our dinner at Sushi Cove in Woodstock with such emotion and fury that it’s actually a little funny.  To backtrack a little bit, we were just finished our first ever Motives Cosmetics Party in Woodstock and even did a HKO to finish the night.  Everything went well and the party was a success.  Congrats, guys!  After we packed up everything into our cars, we headed to Sushi Cove for dinner where Wayne had already made reservations for us.  Thanks, Wayne!

Woodstock is a small town west of Toronto so there actually aren’t many Japanese restaurants in the area, with this being one of few good ones if I’m not mistaken.  I was super excited to try this restaurant out and have a great Japanese sushi dinner with the team. 🙂 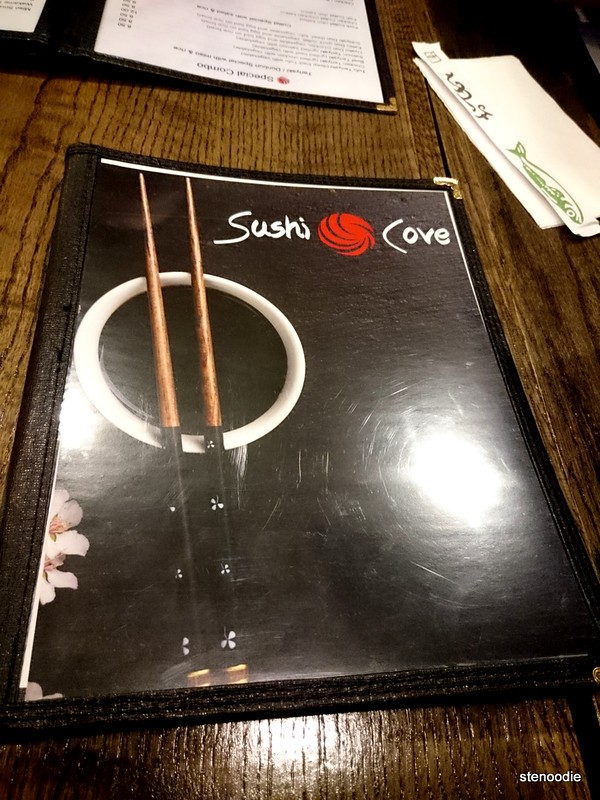 What a nice cover design!

It started off innocently enough.  The eight of us looked at the menu and looked at what would be best to get for our table to share (Rikki ordered her own hot dish meal since she is not a fan of sushi).  For a big group of our size, a few of us agreed that Party Tray C would be a great selection for us since it contained 37 pieces (spicy salmon roll, spicy tuna roll, kappa roll, California roll, and 15 pieces of sushi) plus the Deluxe Assorted Sashimi (18 pieces).  For eight people dining together, if you want everyone to get at least a piece of each sushi, it would make sense to order two sets of the Party Tray so that everyone would get a fair chance at sharing and trying everything.  (I am always in favour of fairness and being considerate, and so it is always on my mind that when we share food at a restaurant and are splitting the costs, enough food should be ordered so that every single person will be able to try at least one thing.)  So when I suggested that we order two sets of the Party Tray for the entire table, one of our friends said no; we should order one Party Tray and get something different to try.  Usually, I love to order a variety of food to try out what the restaurant offers, but when you are sharing food with a large group of eight, you really should consider that just one Party Tray containing several unique components of sushi and rolls aren’t going to be enough for everyone to share fairly.  If we were going to do that, we might as well have split up the table into two halves and each side order what they wanted to if it was going to be a case of “my way or the high way” kind of attitude.  It was inconsiderate.

Even when we placed the order, the server suggested that we order two Party Trays for the entire group, but no, we stuck with the one person’s decision and no one else said no and my viewpoint was not acknowledged.  At the time, these were the only things we placed.  This experience infuriated me because even though we all knew that one Party Tray of food was not enough for the entire group, no one else spoke up.  It infuriated me that one person was the sole decision maker of the table and no one else thought anything else of it.  Why was it that no one else spoke up about this? 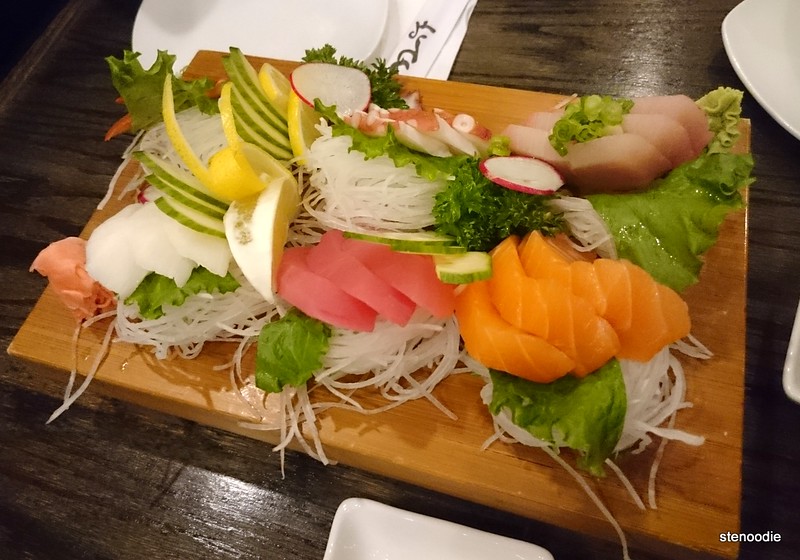 Nevertheless, when our food arrived, it was OBVIOUS that there wasn’t enough food to go around.  The worst part about ordering like this (like I mentioned) is that sushi comes in 5 pieces and sashimi comes in 3 pieces each and you cannot share food like that in a big group.  How the heck do you share this fairly among 8 people. -_-  The first couple of minutes after these dishes arrived at our table, our side of the table didn’t really touch the plate of sushi because we knew there wasn’t enough to go around.  I’d rather not eat if there aren’t enough pieces for everyone.  It just isn’t fair. 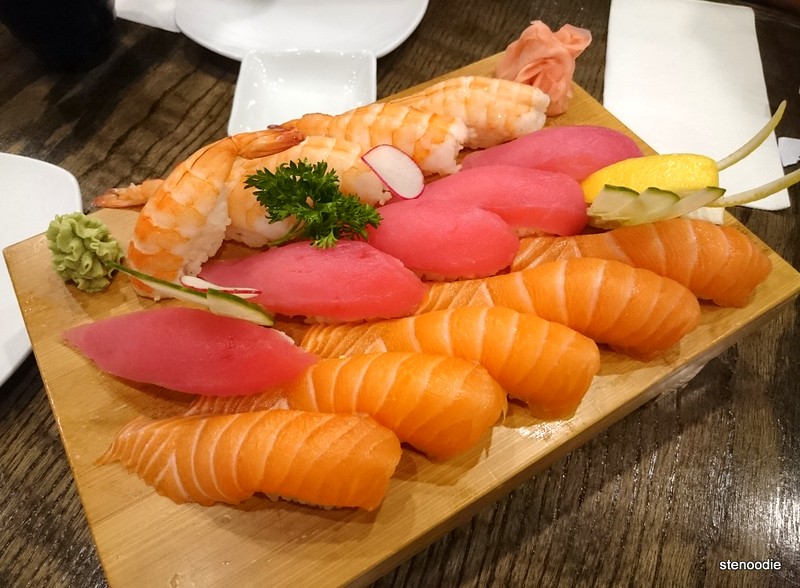 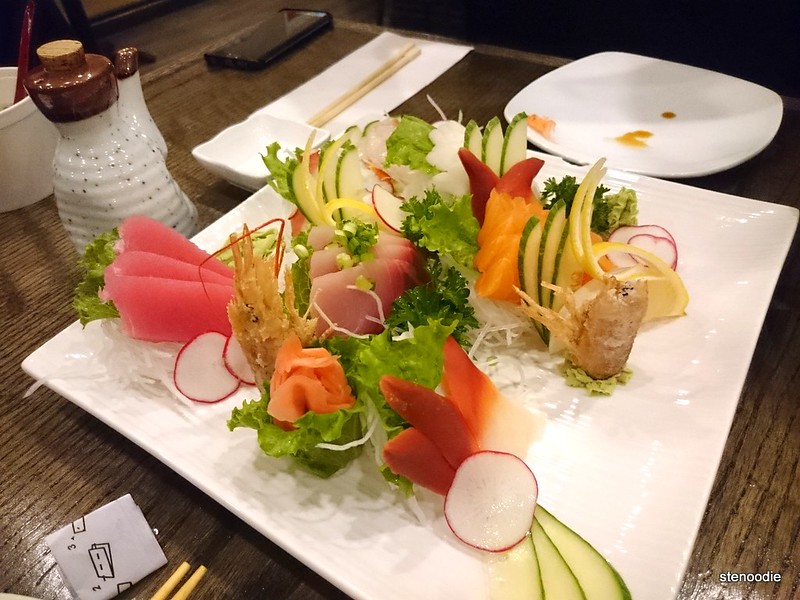 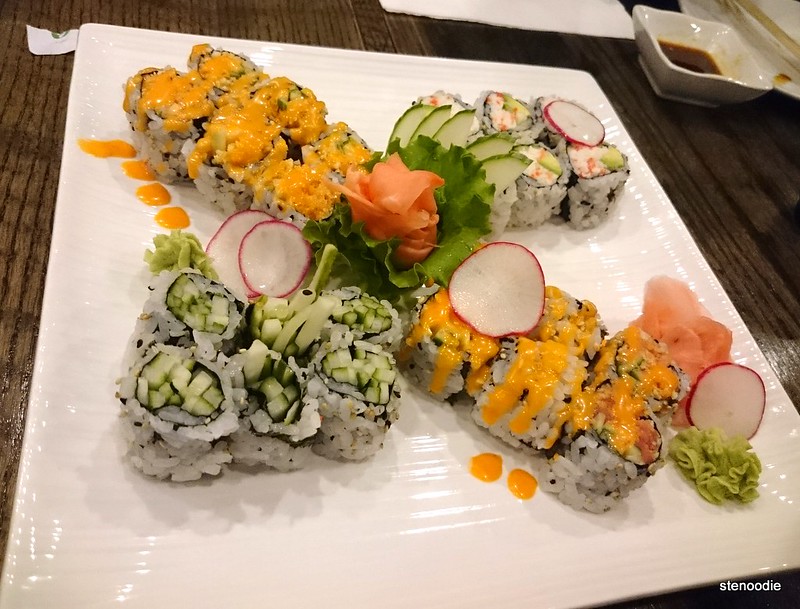 Because of this, I really didn’t get a chance to try everything and people on the other side of the table didn’t get to try all the sushi pieces either (because the guys on the other side had the plate of the sashimi on their side of the table and we had the plate of sushi on our side).  It was finally a “concern” when one of our other friends said, “Hey guys, yeah, I don’t think there’s enough [food].”  Duh.  *eye roll*.  I get infuriated in these situations because we listened to one person who acted as the “one in control” and who was making all the decisions — a decision that didn’t even benefit everyone, and it wasn’t like I didn’t point out the lack of food in the beginning already — just that no one cared to acknowledge it.  Seriously, it’s a group dinner.  Why did only one person get all the say?!  And why did everyone behave like sheep and followed along?!  And I hated the fact that when I spoke up about it, this one person said, “no” and that was that.

Regardless, in terms of the food, I really liked how the rolls were small and nicely made.  It was perfect to put into the mouth to eat in one bite.  I wish there was more of it!  I didn’t get to try out all of the sashimi and it was annoying to hear some of the others say, “Oh wow, the [insert sashimi] melted in my mouth.  Soo good!” when not everyone even got a chance to eat one.  The sushi that I did get to try was pretty good but some of it fell apart when I tried to pick it up — the sushi wasn’t compacted enough when being assembled. 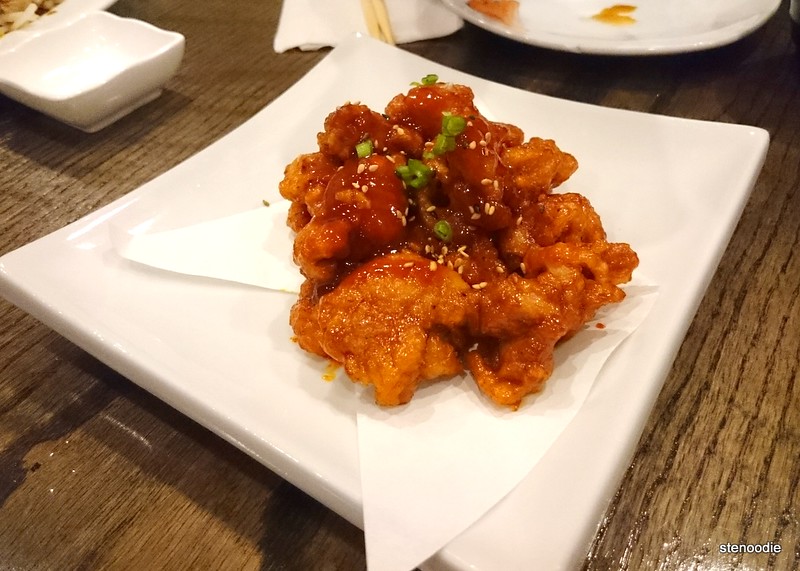 Spicy Chicken Karaage. $8
-usually $9 but it was discounted as part of the Daily Special

After some time, as we were thinking of what else to order, some of us spotted the Spicy Chicken Karaage that was part of the daily special so we ordered it to try.  I love karaage!  It was an interesting type of chicken karaage because it was fried and then doused heavily in a spicy sauce so that it was very wet — unlike most chicken karaage that is served dry.  It was definitely worth a try and it was good! 🙂 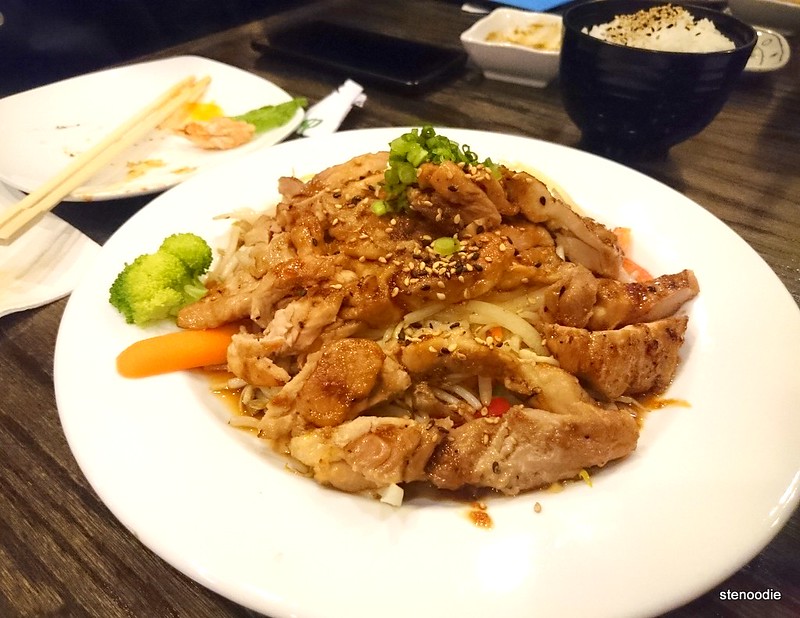 Then, we finally ordered some more food….  why it took so long to agree on this I’ll never know.  I know for a fact that most of us were still hungry too.  *shakes head*.   We ordered the Chicken Teriyaki and Salmon Teriyaki (both came with miso soup and rice) to share.  It was very Westernized Chicken Teriyaki and Salmon Teriyaki that sat on top of bean sprouts and vegetables.  It was decent and the portion was large for one person to eat, so that meant that there was a moderately decent amount for us to share around the table. 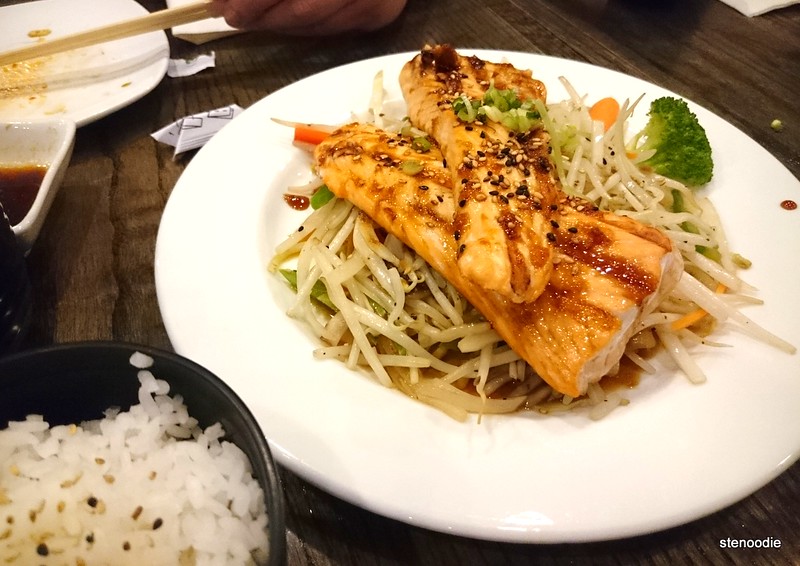 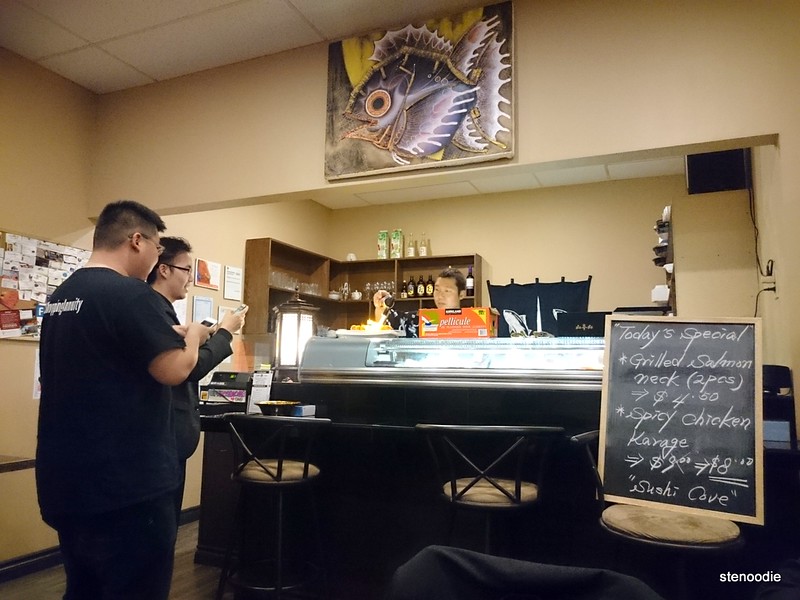 We also ordered the specialty Tiger Roll.  This was a special roll because it was torched in front of us!  By “in front of us”, I actually meant that the one of the cooks torched the roll at the counter and we could go out to take pictures.  Jason captured an amazing shot of this! 🙂 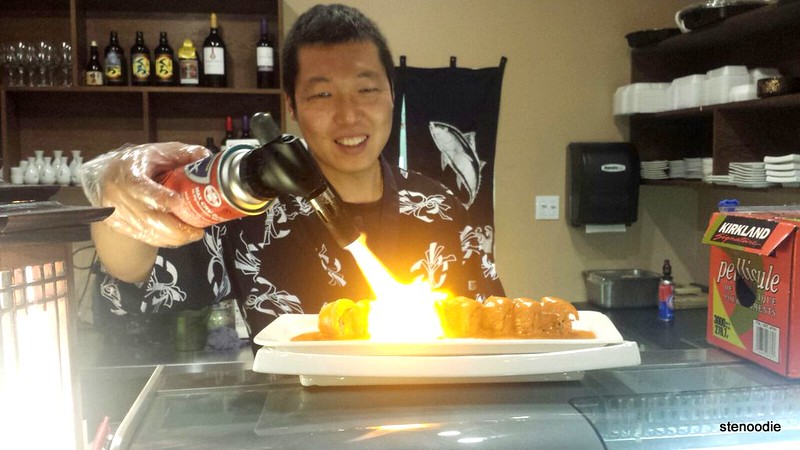 Fantastic shot by Jason (edited by me bahaha :P) 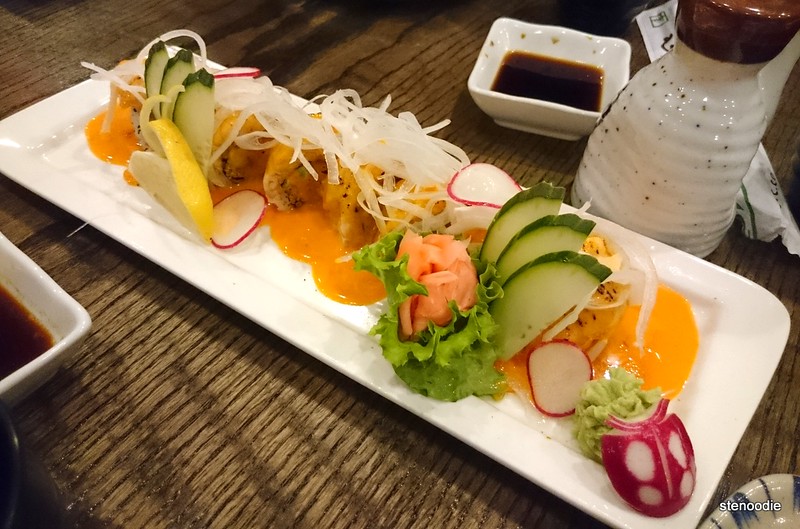 There were eight pieces and perfect for us to have one each (this is the way it should be!).  The Tiger Roll contained spicy salmon, cream cheese, avocado on top with torched salmon, and sweet onion.  It was pretty good but the spicy salmon didn’t taste spicy at all.  I found that it was very cute how there was a decoration on the plate made with a radish that was carved to look like a ladybug.  So creative! 🙂 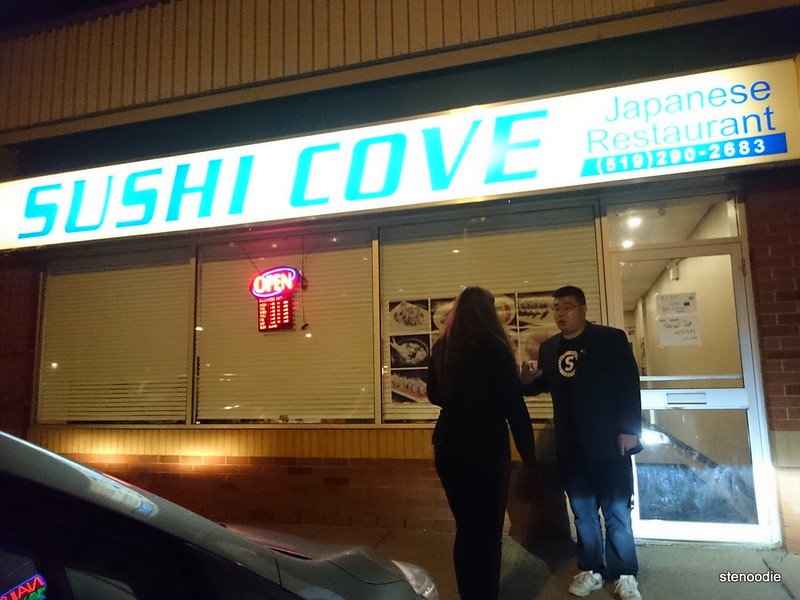 Thanks for having us, Sushi Cove!

I apologize for the personal rant inserted in this review, but this is a personal blog that records my experiences from restaurant to restaurant and this was something I wanted to include.  There was nothing wrong with the restaurant or food or service — everything at Sushi Cove was exemplary — the problem was the certain company that I dined with on this night.  I wish someone else would have spoken up and looked out for the group when ordering — I certainly did and my opinion was ignored.  It’s not a big deal anymore (especially after I wrote about it and ranted XD), but the assumption that the self-serving individual had while ordering and not consulting the others at the table.. the selfishness (and the helplessness I felt) simply aggravated me.

I would definitely return to Sushi Cove to try more of their special rolls and to finally taste their sashimi — at least one piece per person please!  I loved the presentation of the food and the service was good.  Even the sushi cook who was blow torching the Tiger Roll came out to chat and joke with us.

2 Responses to Dinner at Sushi Cove in Woodstock