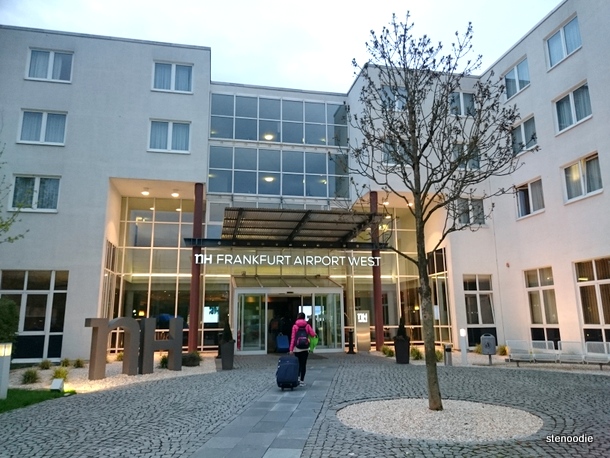 I really enjoyed staying at this hotel.  It seemed like our hotels were getting better and better by the day! ^_ ^ (That actually was exactly what the tour guide promised us too.)

On our fourth night on the Europe trip 2016, we stayed at Hotel NH Frankfurt Airport West, a small town called Raunheim in Germany.  (We stayed here on April 16, 2016.)

We arrived here at 8 p.m. (the sun hadn’t set though) and interestingly enough, our bus driver let us off at the parking area for buses, so we had to take our luggage out from the gravel-made parking lot and roll them to the hotel.  It was quite inconvenient actually.  However, once we got into the hotel, I was impressed and really enjoyed the room! 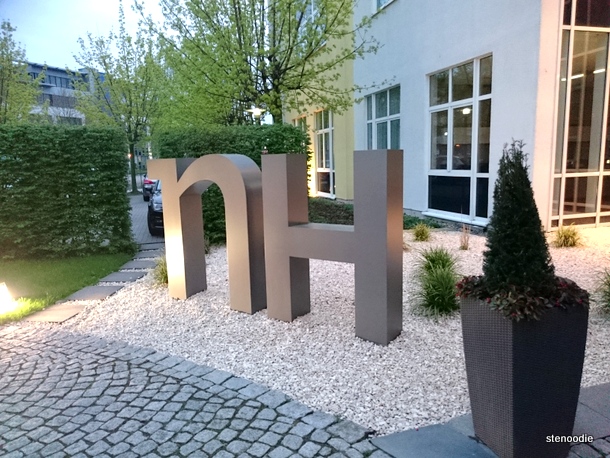 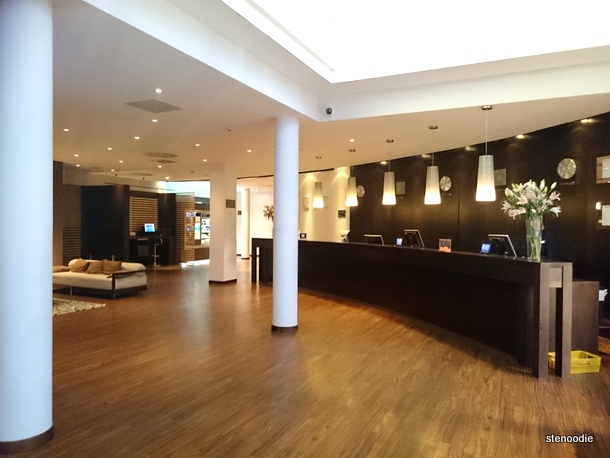 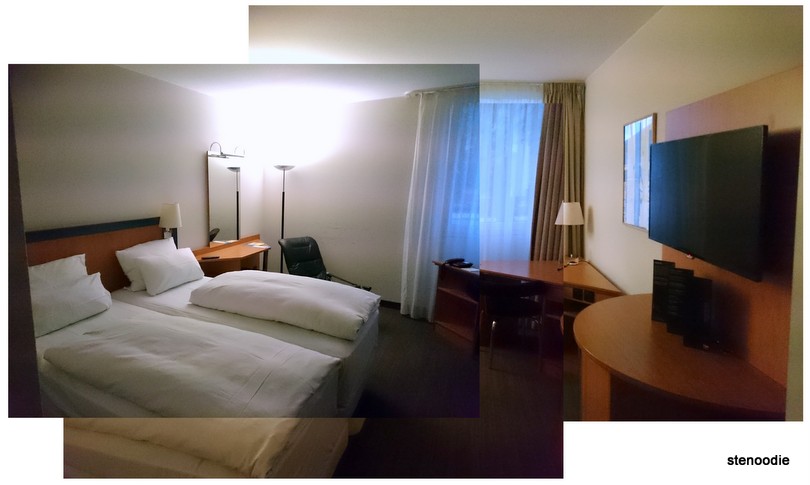 Our room was situated on the ground level which meant a nice view out into the residential street.  The room was big enough and there was even a recliner chair with two desks; one which was a vanity desk and the other for computer usage. 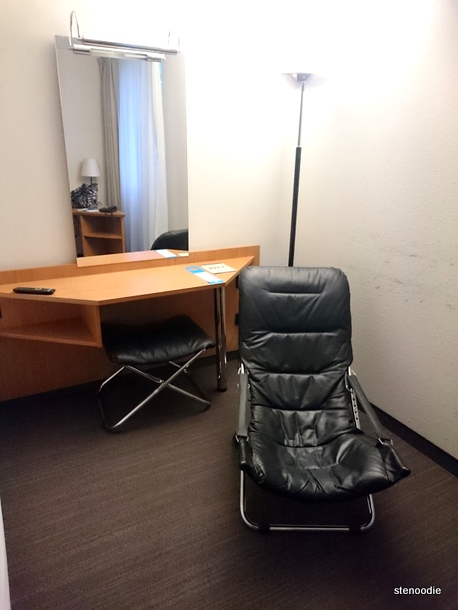 A vanity desk plus a recliner! 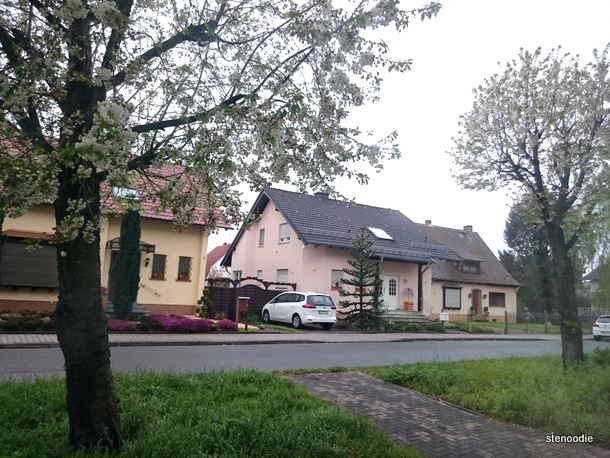 The view outside the window 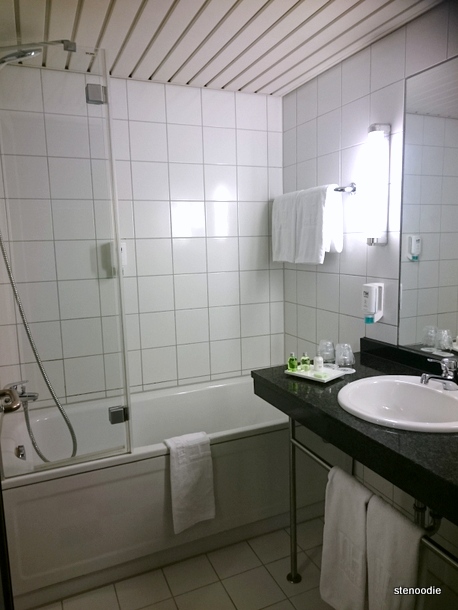 Bathroom. So clean and bright! 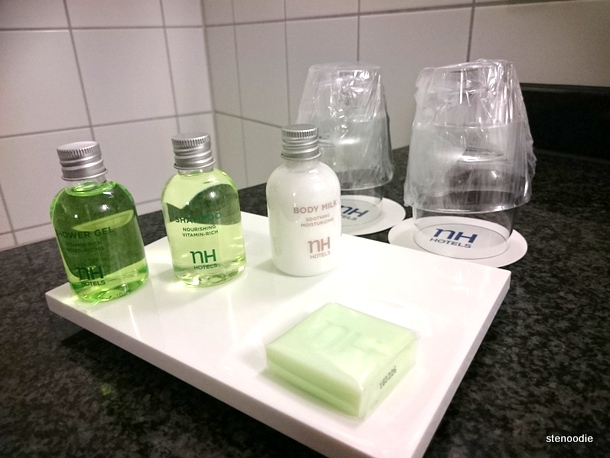 I loved these little bottles of the complimentary hygiene kit

I really liked the design of the washroom too.  There was a tub and a stand-in shower and the shield of the plastic was designed so that when you stepped into the shower, you pulled out the fold-out part so that water wouldn’t get on to the floor.

There was wireless Internet which was quite fast and multiple power outlets in the room. 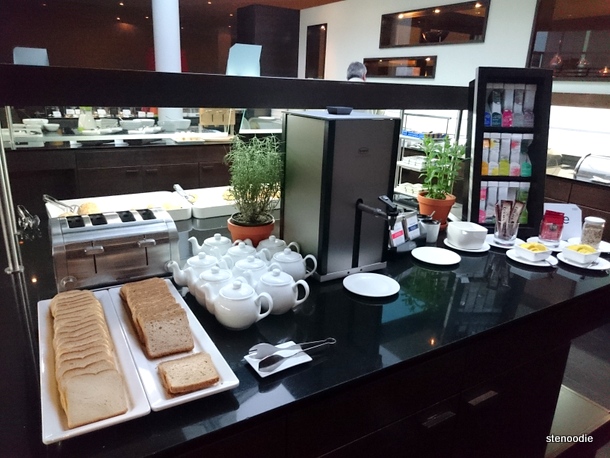 The next day for breakfast, we enjoyed their continental breakfast in their huge dining area.  I was so impressed with this continental breakfast!  Everything was so sleek and modern with a lot of variety of food!  There were so many different stations: a drink station (with a funny “multivitamin juice”), cheese station, cold cuts station, baked goods, hot food, a ‘honey’ station with three different types of honey, these little “toasts” with cheese and cold cuts on them, these German Leberwursts known as “liver sausages”, and more. 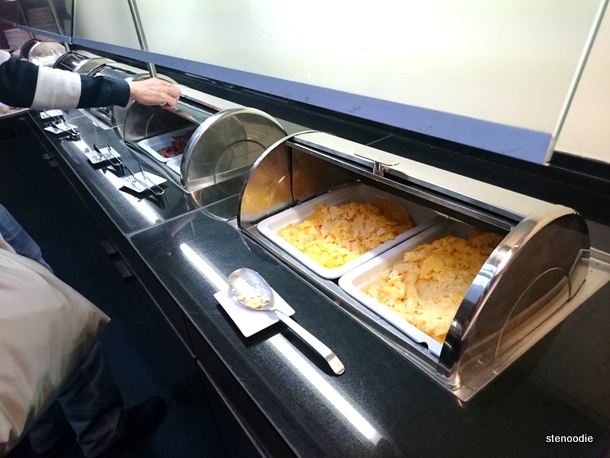 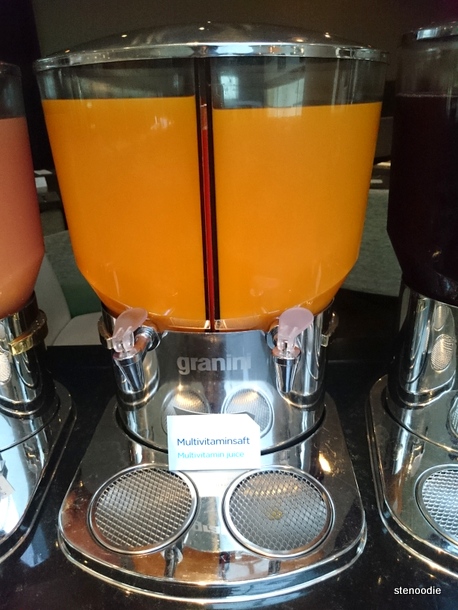 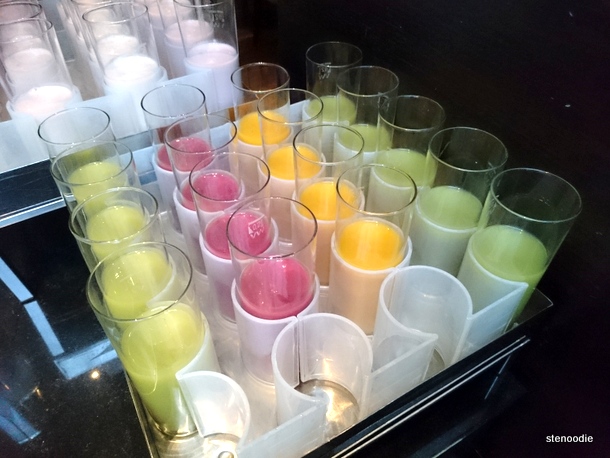 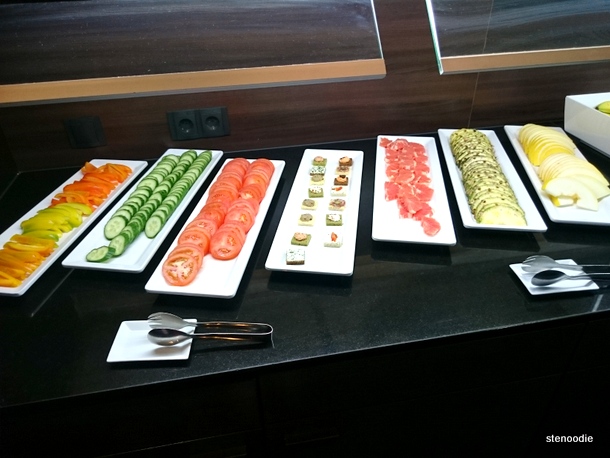 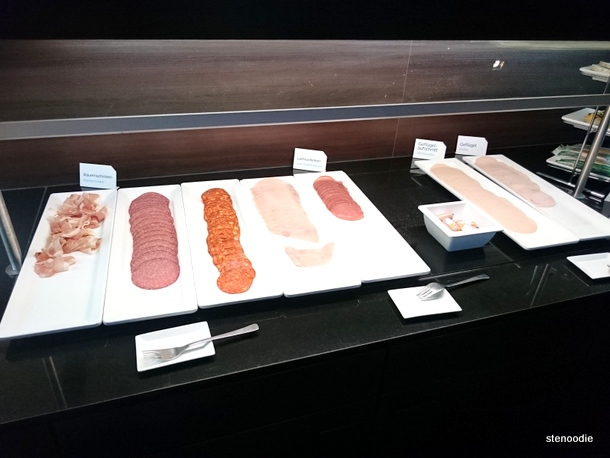 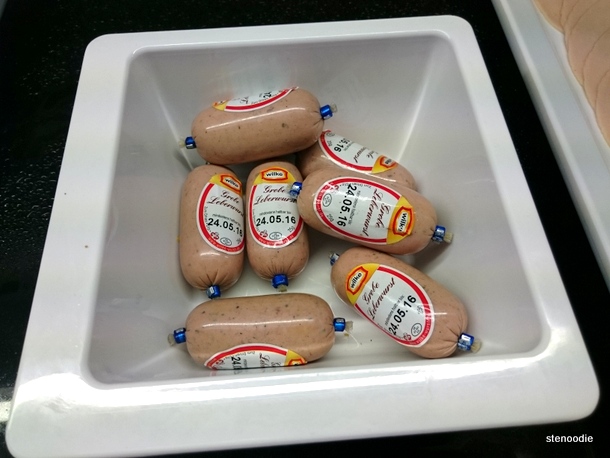 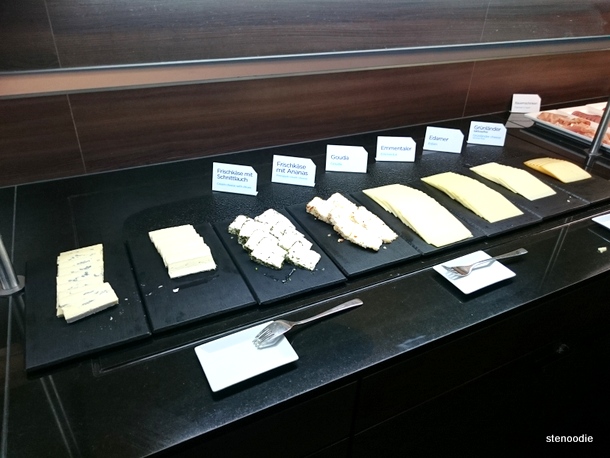 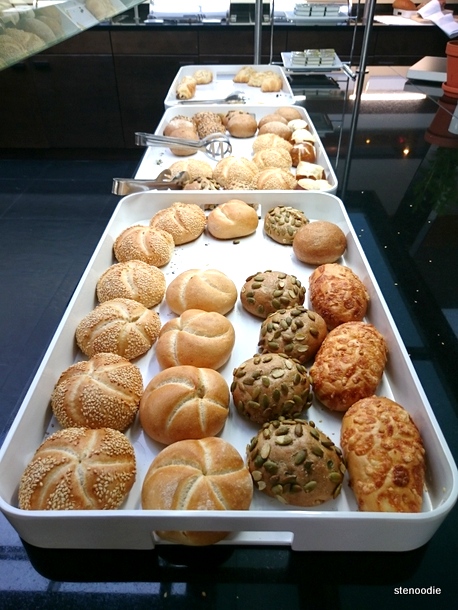 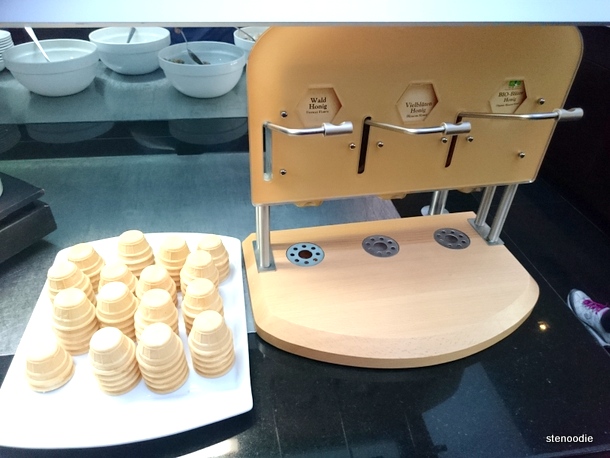 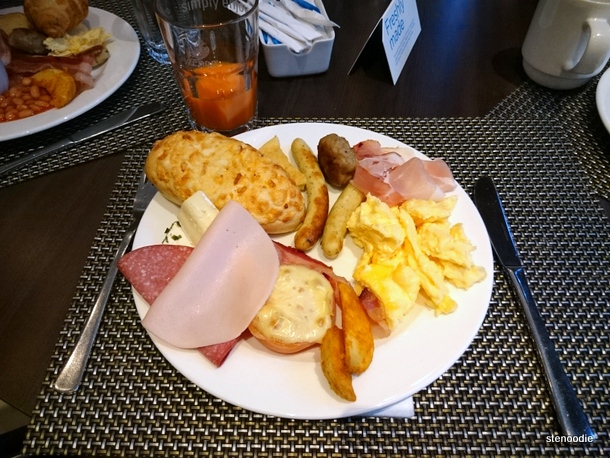 Breakfast was lovely and I would have loved to enjoy another one here the next day, but unfortunately, we were moving to different hotels each day on our trip so this continental breakfast remained a great memory.

If I did have more time here, even on the morning of this breakfast, I would have gone back and tried out everything at each of their stations.  I even would have tried out the three different types of honey at the ‘honey’ station.  I had never seen anything like that before! 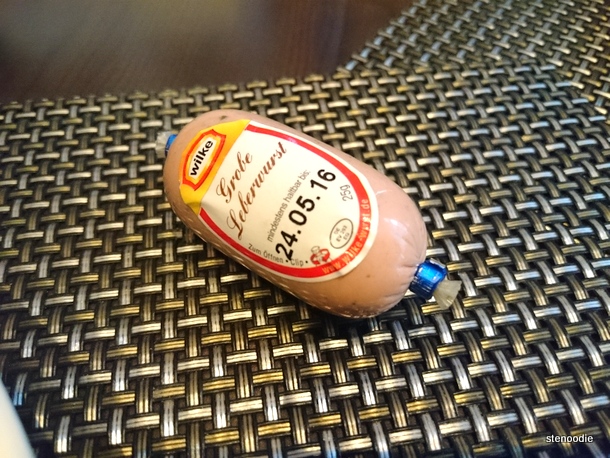 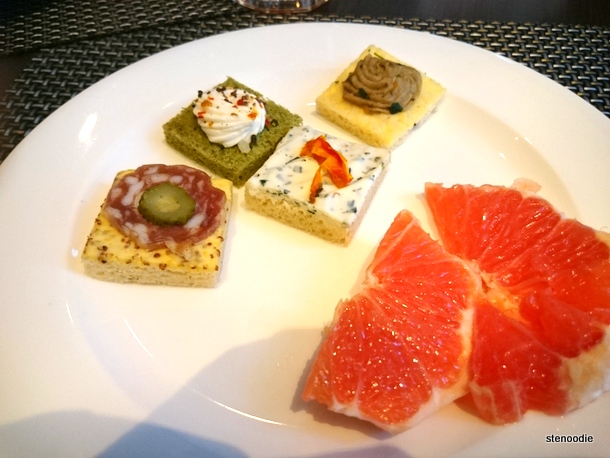 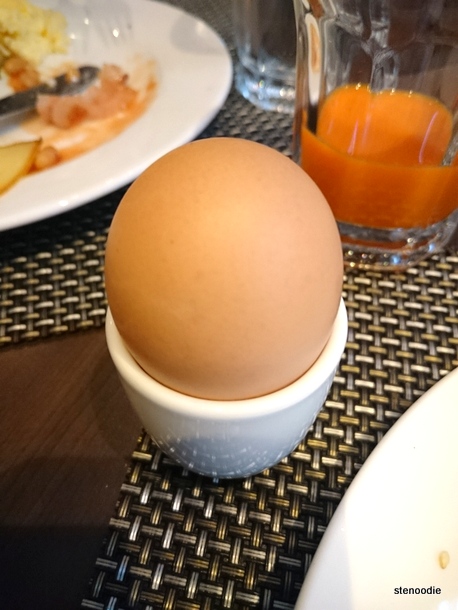 Hard-boiled egg in its own little egg container 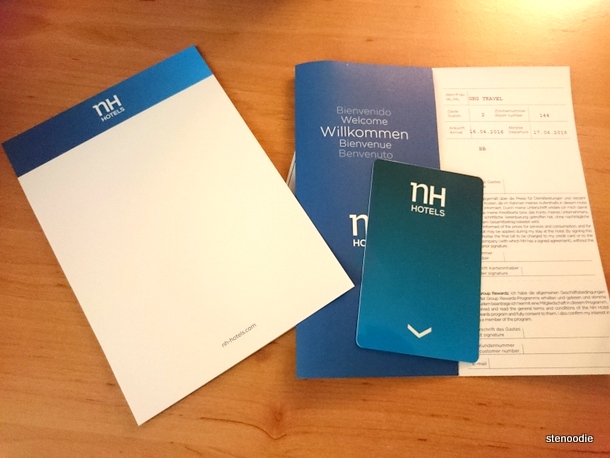 I would highly recommend staying at the Hotel NH Frankfurt Airport West in Raunheim, Germany if you find yourself staying in this area.  My visit was comfortable, clean, and I really adored the breakfast buffet in their dining room.

This hotel used to be called NH Frankfurt Rhein Main and is a short drive from Frankfurt International Airport, hence the ‘airport’ in its name.  There is an airport shuttle available (15 minutes to drive to the airport).