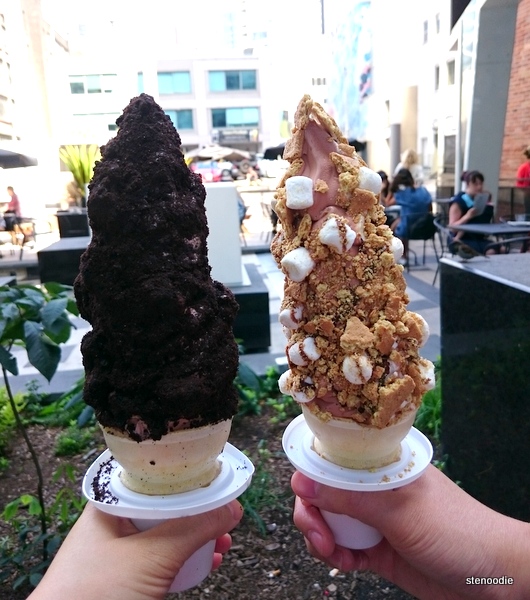 Toronto is in the midst of a crazy ice cream trend right now and one of those trendy ice cream dessert parlours is Sweet Jesus.  Sweet Jesus rose to fame on instagram last year with its high toppling soft serve ice cream decorated with cookie crumbs, cotton candy, brownie bits, and more.  After our lunch at Wilbur Mexicana just ten minutes down the street, Helen and I headed here to try to see if the line-up would be short enough for us to try this trendy dessert place on a summery Saturday.  (The last time I attempted to try Sweet Jesus, the line-up was around the corner and it looked to be a 30-45 minute wait and so I left and didn’t wait.)

As we approached the corner from King Street West onto John Street, there was barely any line-up!  Yay!  There were a few people in front of us but we only waited about 10 minutes from start to finish. 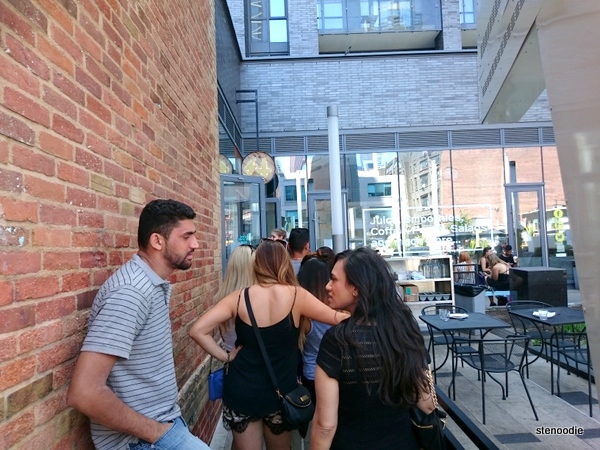 The line-up this time around at Sweet Jesus

I took a look at the menu at their “pimped out soft serve” ice cream choices and chose the Bangin’ Brownie.  I wanted something chocolaty and that was something that would fulfill my chocolate craving. 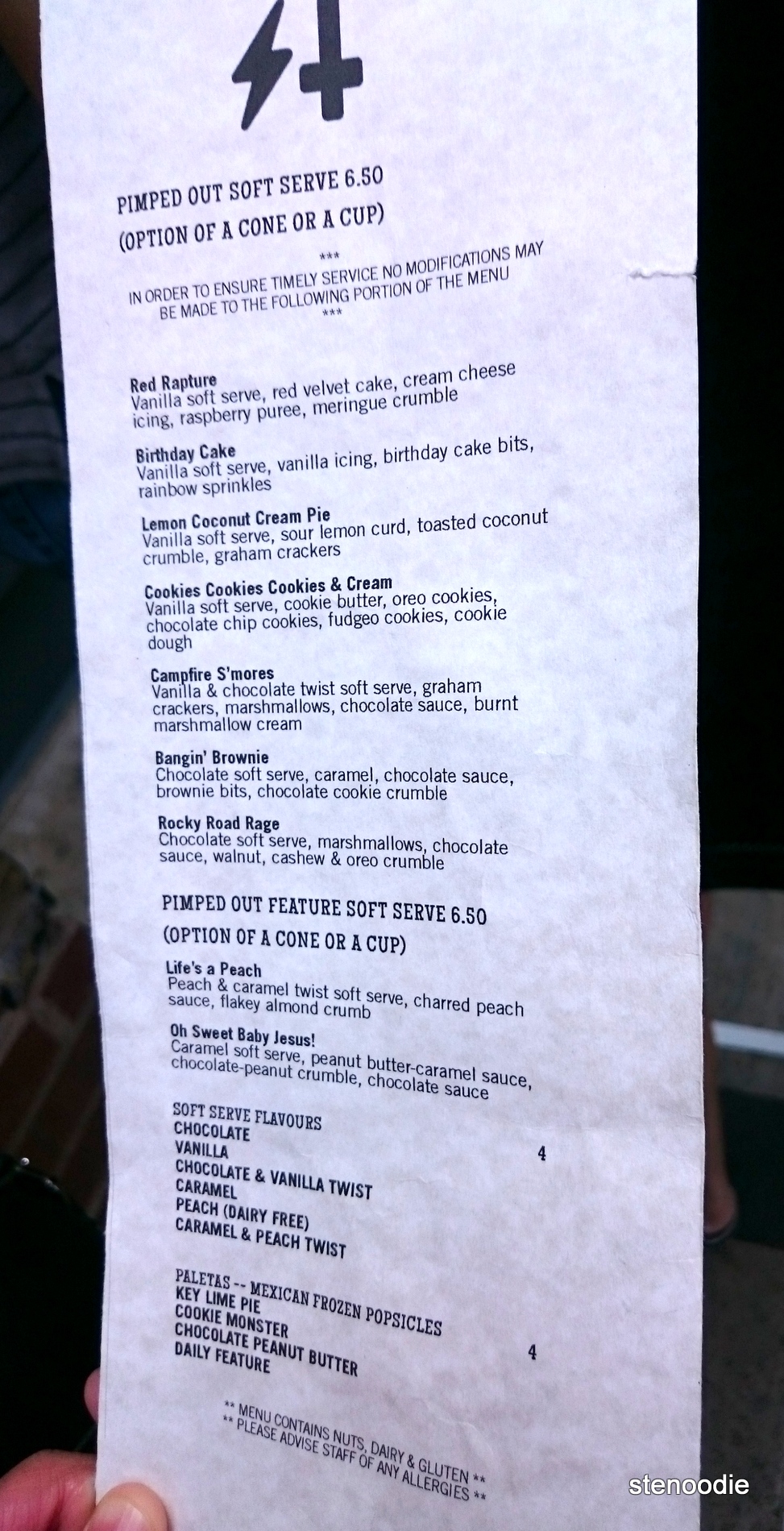 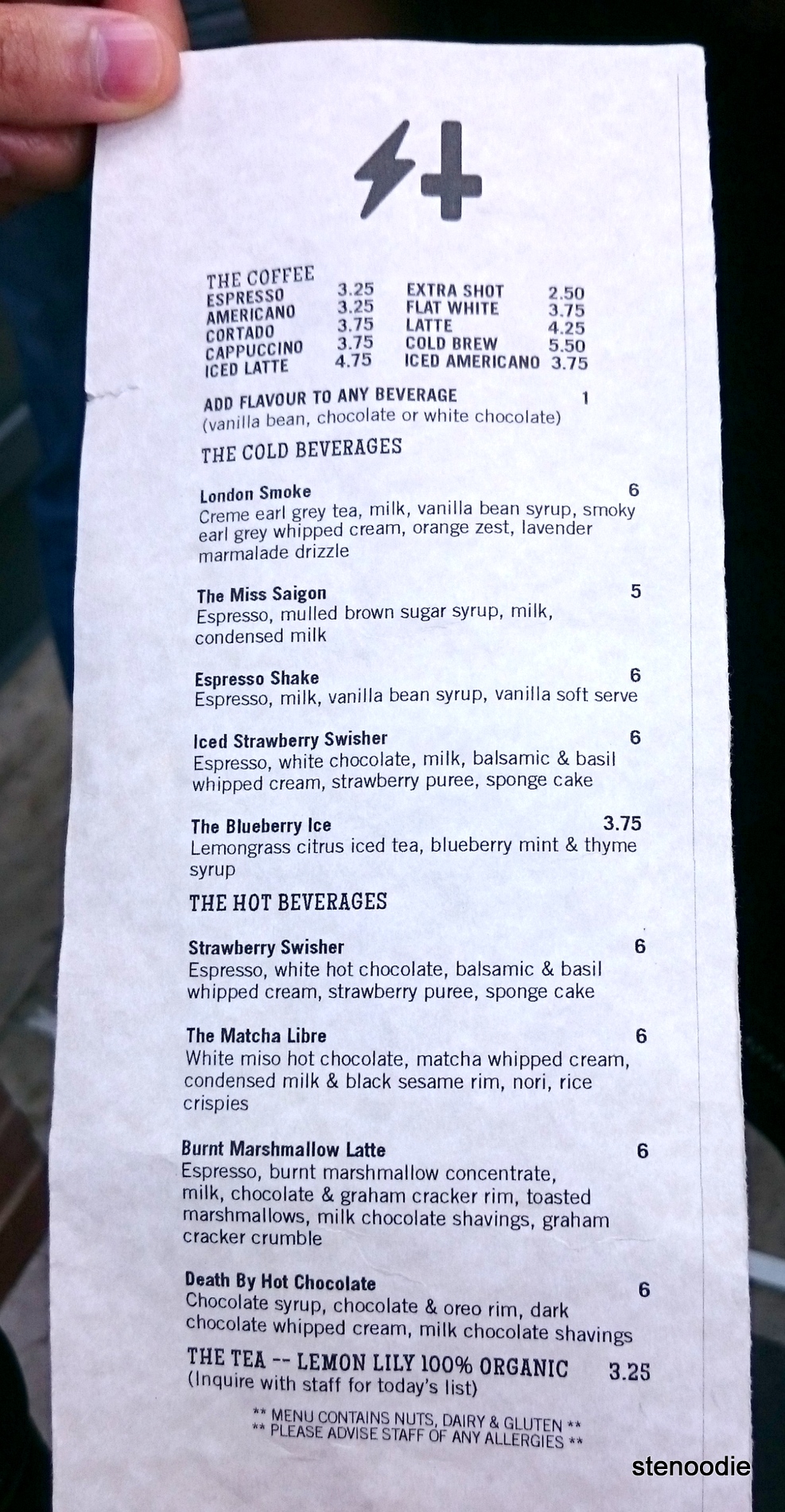 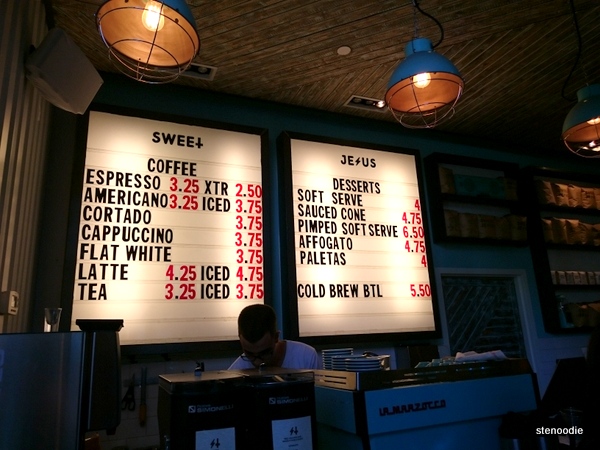 Menu at the store

I recalled seeing the colourful and definitely pimped out ice cream cones which had the cotton cotton pieces on it but couldn’t find it on the menu.  Thus, after I placed my order — there are no seats inside Sweet Jesus, only a cashier, espresso counter, and the ice cream counter where you receive your orders — I asked the lady manning the cashier about the ice cream cone with the cotton candy.  She informed me that unless people know about that ice cream cone, they no longer serve it on the menu.  That was interesting to know.  (I found out it was called “Krusty the Cone”.) 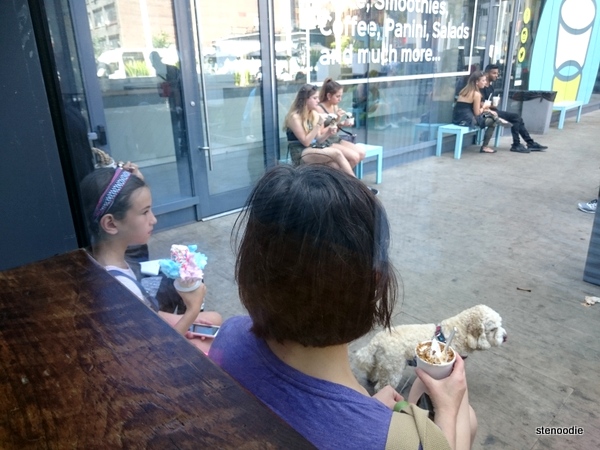 While in line, I spotted the Krusty the Cone that a little girl was holding! 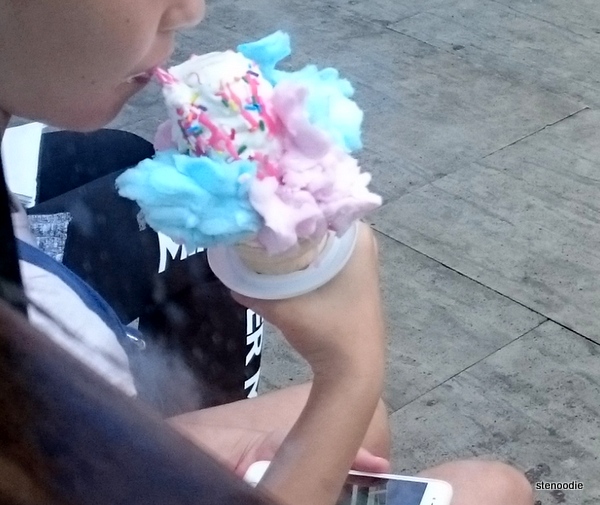 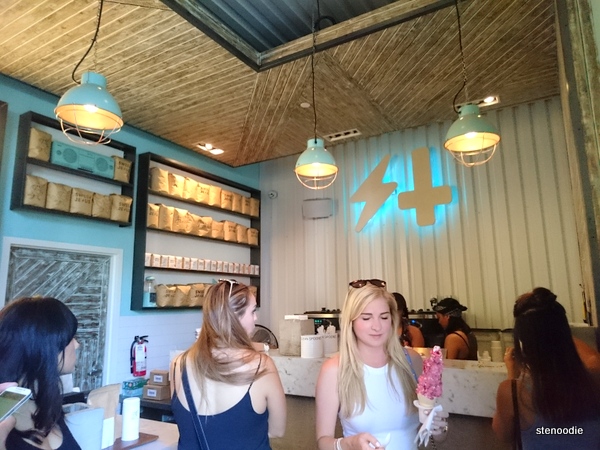 Really small space inside Sweet Jesus — efficient space though! (You can also see the girl carrying a “Red Rapture” cone

I got to somewhat watch my Bangin’ Brownie soft serve ice cream being made in front of me.  It turned out that they have huge Tupperware tubs filled with the various toppings of each flavour of ice cream.  The staff then placed the entire ice cream cone (or cup) into the Tupperware container to allow the toppings to stick onto the ice cream and then cup it so that everything sticks onto the surface of the ice cream. 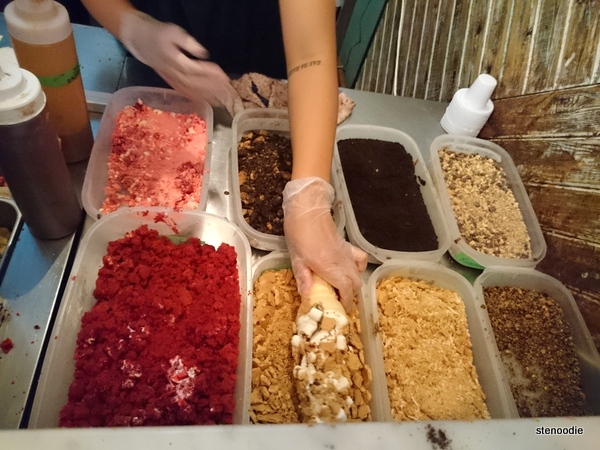 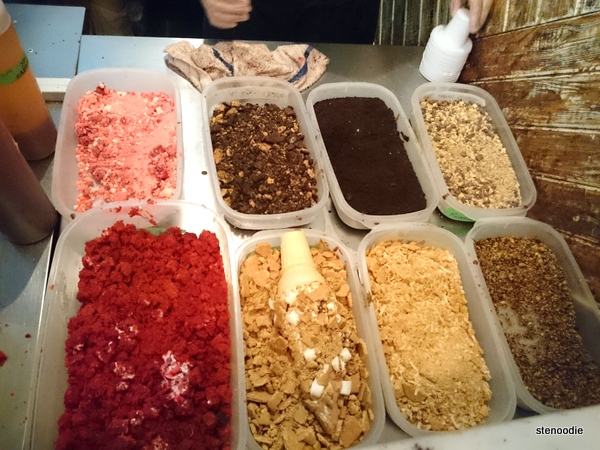 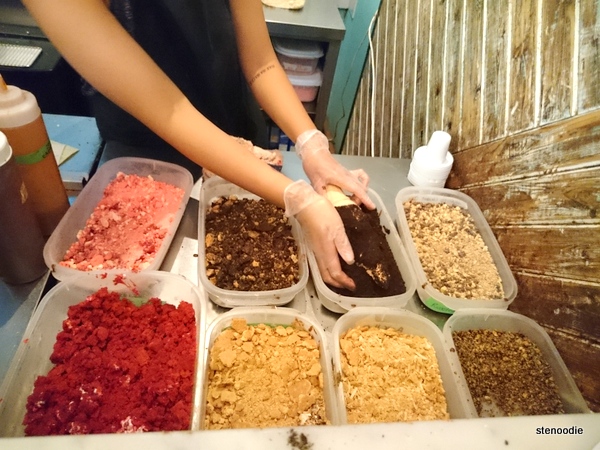 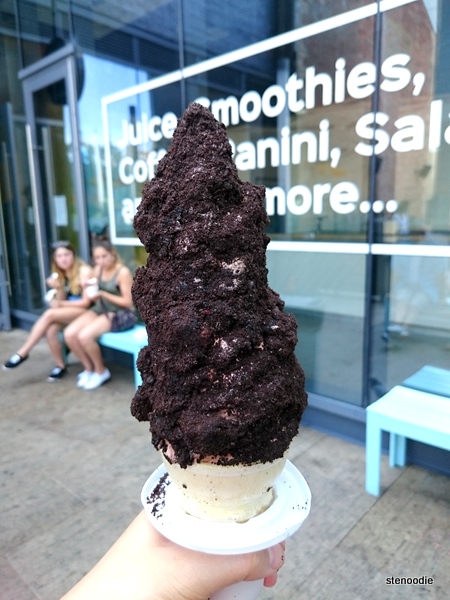 It was a really tall and substantial ice cream cone!  (You could get it in a cup too but when I observed the cup portions, they were much smaller than the cone portions.)  I had to be careful when holding it in case the whole thing dropped, haha.  I liked how there was a patented “cone holder” on the bottom which helped to shield any crumbs or toppings that might easily fall off.  And fall off it certainly did!

The Bangin’ Brownie was a chocolate soft serve with caramel, chocolate sauce, brownie bits, and chocolate cookie crumble all throughout.  Based on just its appearance, it looked like a cone covered with dirt. XD  No offence at all; that was just how it looked.  Thus, I had found Helen’s Campfire S’mores cone much more flavourable to photograph since I could see more of what was on it instead of just “darkness”. 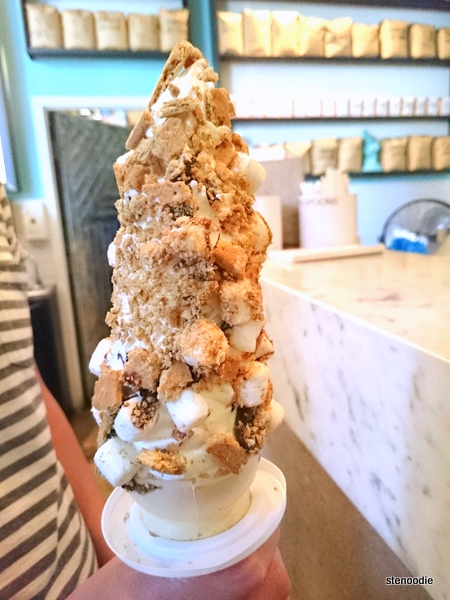 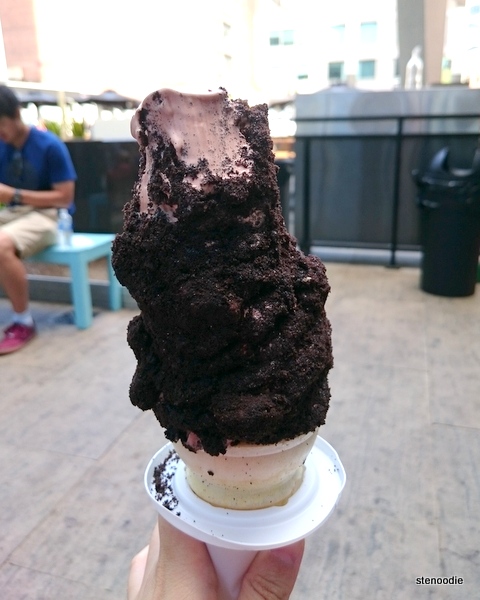 We found a spot to sit (they have a limited number of benches in their outdoor area) to enjoy the ice cream on this summer day.  My Bangin’ Brownie was definitely chocolaty and after the first bite, it became apparent that it was truly only the surface of the ice cream that contained the toppings.  The chocolate soft serve ice cream underneath all the toppings was devoid of any other toppings.  Thus, after I had licked or finished all of the surface toppings, it was just a plain chocolate soft serve cone that I was holding.  At the time of eating, I wasn’t very impressed with this because I truly felt that it was one of the most hyped-about ice creams I’ve ever had.

However, looking back on my visit, it was definitely amazing to finally get to try the ice cream from Sweet Jesus.  Sweet Jesus has since expanded to two other locations in the GTA and I can’t say for sure that I won’t be back to enjoy more cones — for example, if I’m in the area and with friends who want to have dessert from there.  At the same time though, when I think about paying $7.35 after tax for a regular ice cream cone that was merely covered with toppings that didn’t have anything else particularly amazing about it, I’m not going to rush out to get another cone any time soon. 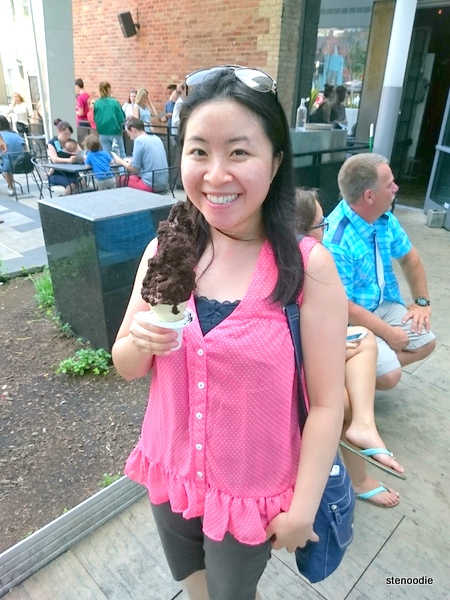 Very happy and grateful to try Sweet Jesus out!

My tip is that if you are trying it for the first time, you can consider sharing it with another person since the portion is quite big.  The portion in the cup version isn’t as big but both versions of the ice cream cost the same price.