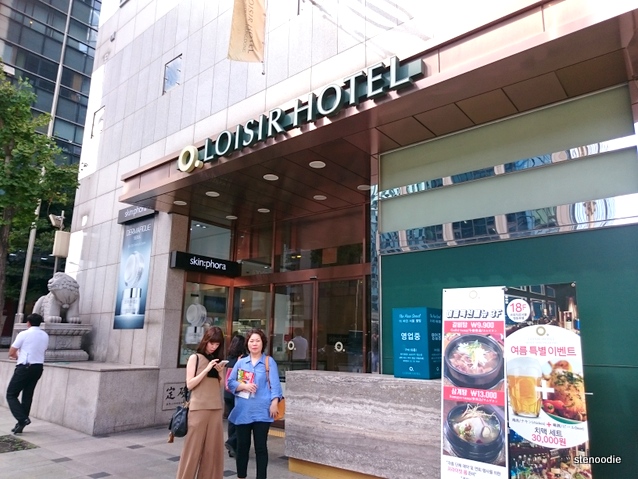 On our fourth and fifth day in South Korea in 2016, we stayed at Loisir Hotel in Myeongdong, Seoul.  Loisir Hotel is located in the heart of Myeongdong which made it extremely convenient and easy to travel around this popular shopping and eating district during our two full days there.  I had been to Myeongdong before but really appreciated how close our hotel was to this major part of Seoul.

When you arrive at Loisir Hotel, you actually have to take the elevator from the ground floor to the third floor — that is where their hotel lobby and reception desk is.  The representatives at the reception desk spoke English so we were able to check in relatively easily.  I liked how large the lobby was. 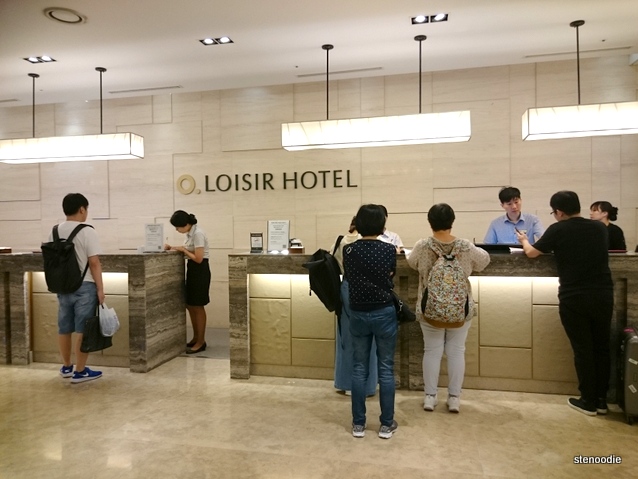 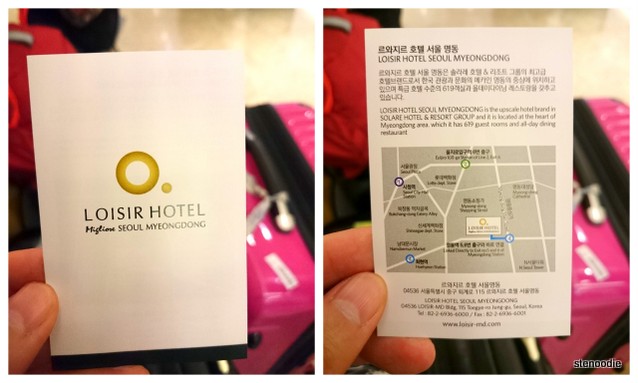 Card in case you get lost

Our room for the next two nights was a standard two single-bed hotel room.  It wasn’t terribly big but it was definitely not very lofty either.  It was just right for two people to stay in it. 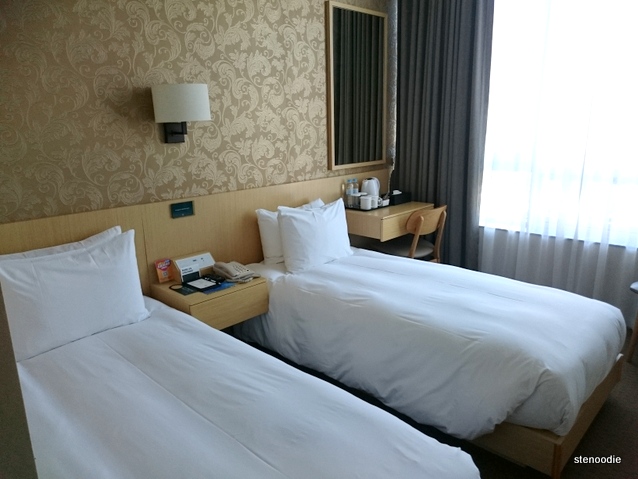 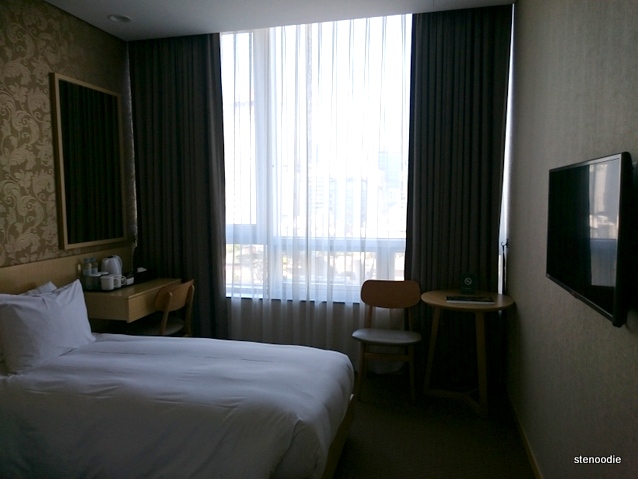 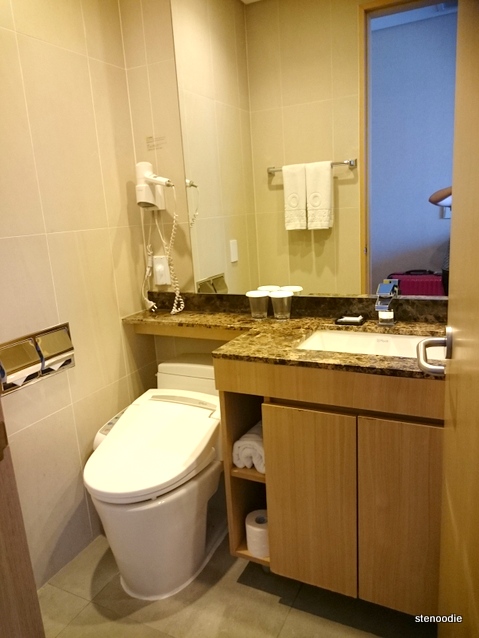 The washroom was a standard one with a washer toilet, sink, and bath and shower.  Since it was a little squishy in there, the door of the washroom did hit the side of the sink every time that you tried to fully open it (this was a little annoying at times).  There were complimentary items like shower gel, shampoo, and conditioner too.  The entire hotel room was very clean, modern, and definitely reflected the tourist city life (after staying in Gangneung for the first three days on our visit, we had been used to the larger spaces in the rural areas and which were also less new and less modern). 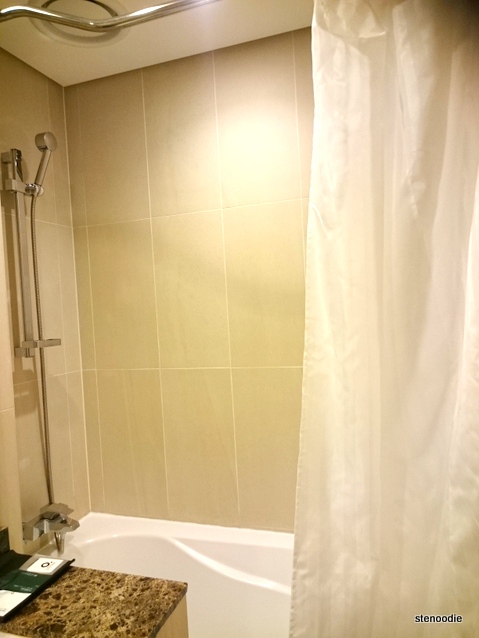 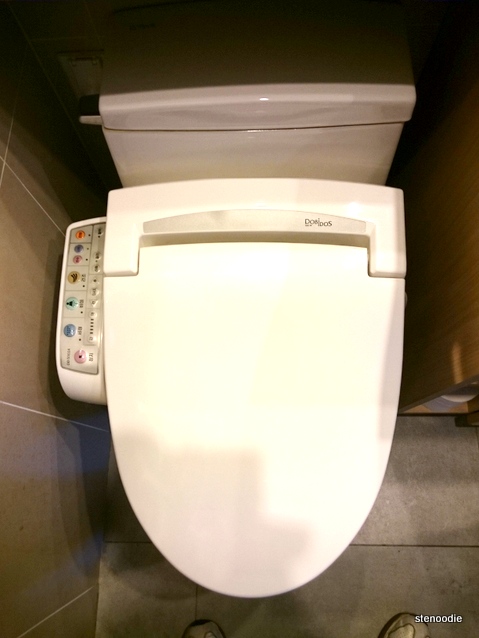 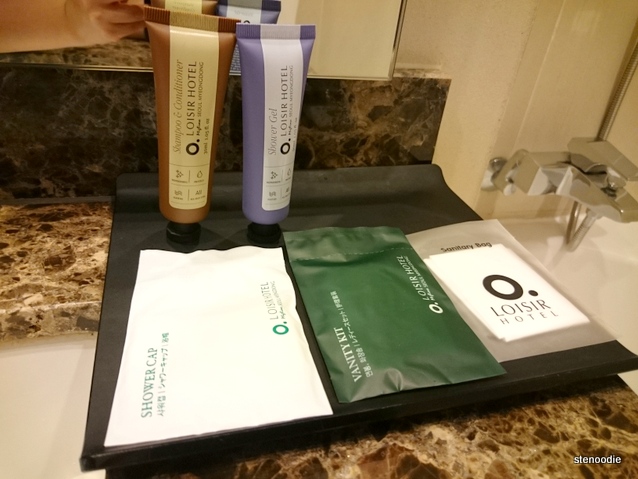 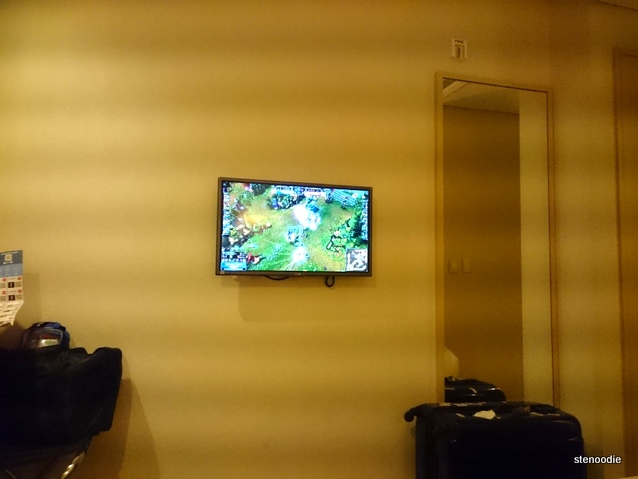 Tiny TV in the room. StarCraft was on!

Our view overlooked the landscape of Myeongdong, Seoul. 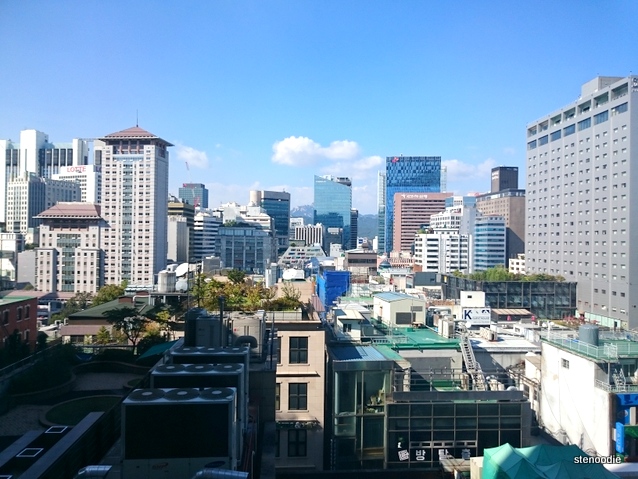 What a pretty view! 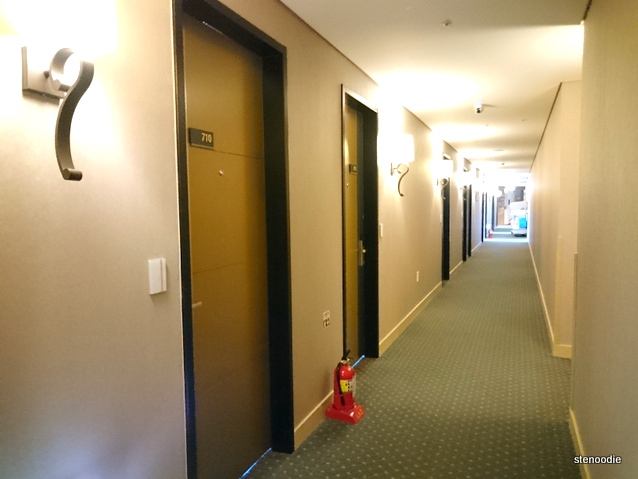 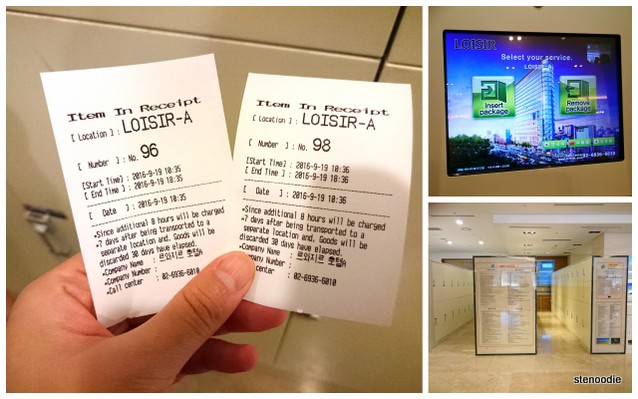 Keep a receipt that your item is locked up

When it came time to checking out on the last day, it was simple enough.  Also, I want to talk about the luggage lockers that were provided to guests free of charge on the third floor (across from the reception deck).  Usually, when you want to keep your luggage at the hotel after checking out (almost all hotels in the world allow you to do this — either with a fee or without), you keep it with the bellboy at the luggage reception area who keeps it in the storage room until you are ready to claim it.  At Loisir Hotel, this luggage storage process was completely automated! 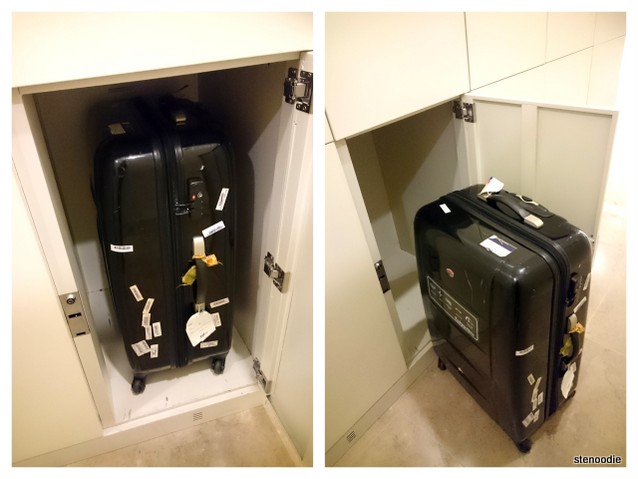 The locker fits my large luggage! 😀

How it worked was that there were rows among rows of lockers for your luggage.  There were half-sized lockers and full-sized lockers, all of which were made to fit any of your luggage (carry-on, checked luggage, etc.).  It was really cool because there was a self-service machine where you selected which locker you wanted to “borrow” and then once you clicked on the locker from the onscreen map and input a password, the actual door of the locker would swing open by itself!  After you place your belonging into the locker, you close it and it will be locked up.  You can only leave your belongings there for 8 hours, after which the unclaimed contents will be charged for a fee.

When it came time to returning to the lockers and claiming our belongings, you once again go to the self-service machine, indicate that you want to “Remove package”, select your locker number, input the password you created for yourself, and the door will then swing open for you to retrieve your luggage.  It was incredibly cool and high-tech!  I loved using it. 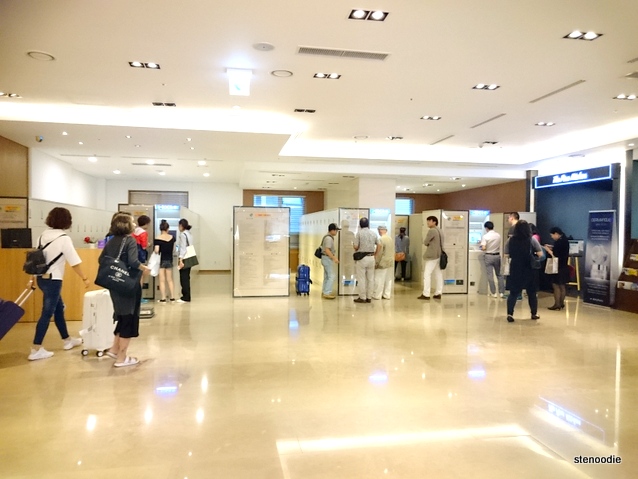 Even after using it and we were assembling our things before leaving Seoul, I was in admiration of these self-service lockers and watched other travellers operate and store their belongings too.  What a smart idea!  However, I think that if the hotel were to have a sudden influx of guests who suddenly needed to all leave their packages behind, then there could be a risk that all of the lockers will be rented out.  I’m sure that they must have done some calculations to make sure that there will always be a good number of lockers available for their guests. 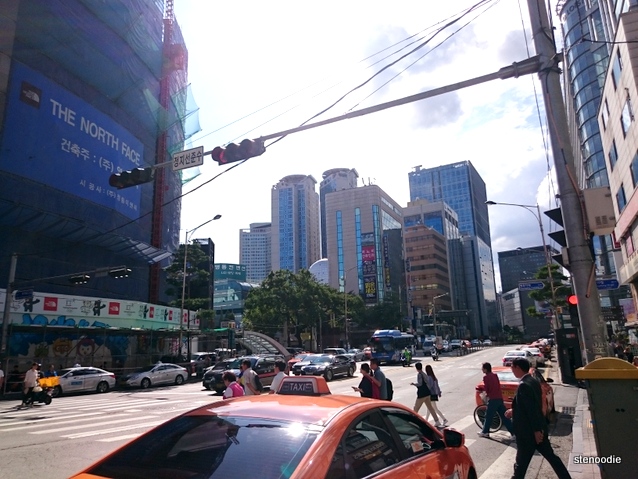 Some views from the street outside the hotel

All in all, I really enjoyed my stay at Loisir Hotel.  I would especially recommend this hotel if you plan to stay in the Myeongdong area for shopping and eating.  The hotel is located just two minutes away from the Metro underground subway as well as around five minutes walking to the airport shuttle bus stop.  (Oh, and one more thing:  The wifi in the room was really weak when I tried to log in.  I ended up using my wifi egg while in the room since the hotel wifi was very poor.  The wifi worked fine in the lobby, however.) 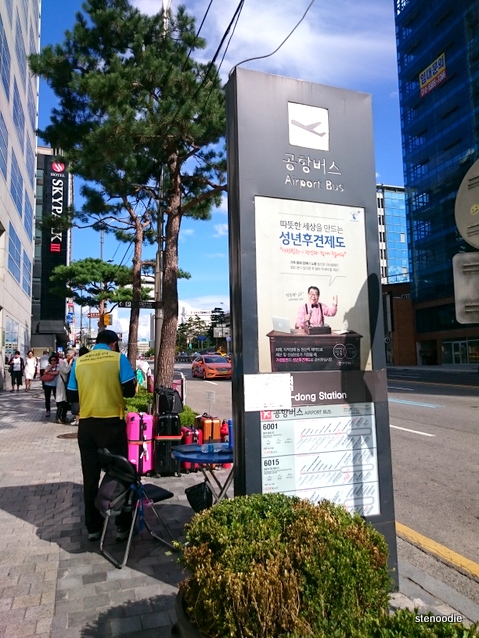 (Just as an aside, the airport shuttle to Incheon Airport from Loisir Hotel was incredibly efficient and easy to use.  Look for number 8, which will lead you to the bus stop.  Once you are there, there was a staff member stationed there who helped to ensure that you were at the right place and to line up your luggages for you.  There were airport shuttle buses every 12 minutes (which made it incredibly safe and easy to get to the airport on time).  When the bus arrived, the staff member helped to load your luggage onto the bus.  You could pay via cash to the driver or if you have a T-Money card, you could have loaded it with the desired funds and “tap” on.  It was so easy to get to the airport in a comfortable way from Loisir Hotel!) 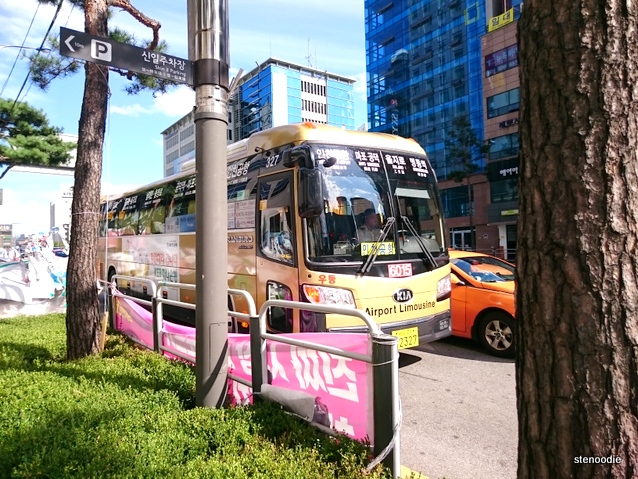 It arrived so quickly! 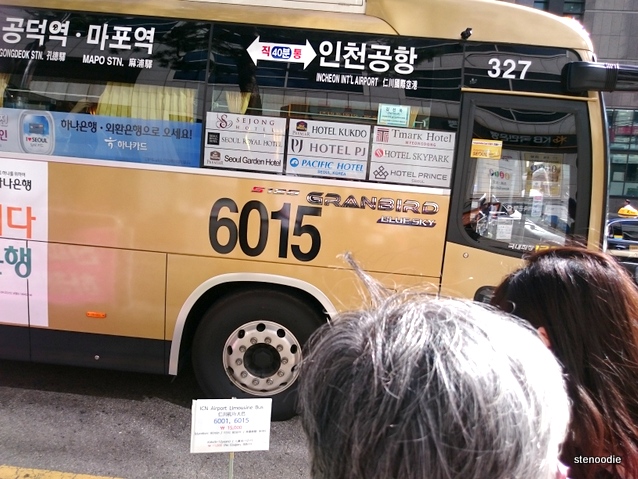 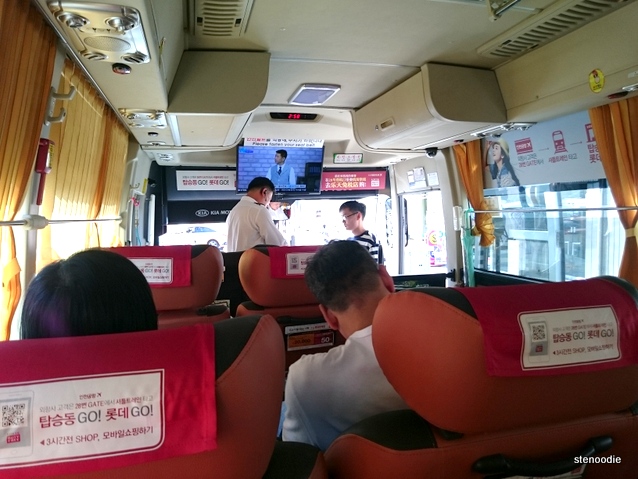 These seats were quite comfortable! I actually fell asleep too on the way there