In one of the steno groups on facebook that I belong to, one of the members mentioned that a stenograph in Chinese is called a 速录机.  I Googled this and this gave me a fantastic array of pictures of Chinese steno machines and stenographers.  So cool!

The set up is exactly like how a regular stenograph for English is.

I found the first picture of the keys to be particularly fascinating.  Since I’m currently taking bi-weekly Mandarin conversational classes in preparation for my trip to China in mid-July for the DiSCOVER program, I’ve been learning a lot about pin yin and Mandarin tones.  So when I saw the random vowels labeled for the keys, I knew what was going on.  The first time I heard of the existence of Chinese stenographers was from Jade King’s blog post.  Supposedly, Chinese stenos write much like how they text into their phones — they choose a “side” of the character and then choose the right “stroke” for the Chinese character from a list of options.  I wasn’t exactly sure how they did this since they must be thinking SUPER fast to choose from all of the different variations of Chinese characters that are available — on top of stenoing in general which is already a really fast skill to have. (Not really sure if I’m making sense here; it’s 1:30 in the morning and I’d like to sleep but I also wanted to get this posting down before it slid to the back burner).  In any case!  Because I’ve been learning a lot of Mandarin lately, I think I have a further general idea of how the Chinese stenographers steno.  Since Mandarin is all about the four tones and every character is based on one of the four tones in addition to the initial and final  pin yin, this must be how they phonetically sound out all of the characters.  Even though Mandarin is not alphabetical, they are still listening to how a Chinese character sounds like in order steno it; much like how English stenos write the words they hear phonetically.  This is pretty cool.  I guess there is a similarity between the stenos after all.

However, the first chart shows options that are a little different from the actual machine that is pictured on the right.  There are three extra keys on the chart than what is physically possible to stroke out on the machine — the third key between the thumbs part and the stack of three keys for both hands of the ring fingers.  Maybe on the steno machine, they would write these out by pressing the two keys on the upper and lower bars at the same time?

These two slides are copied directly from the Mandarin notes that I have from my Mandarin classes.  We review this every week before we start the lesson to go over the four tones and finals and initials.  I can only imagine that what is on the Chinese steno’s keyboard corresponds exactly to the four tones and pinyin in Mandarin. 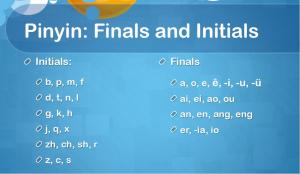 And here’s a picture from Google showing all these Chinese students learning and practicing steno.  It seems like the one in the front is practicing hard copy from a newspaper article.  Supposedly stenographers are paid very poorly in China.  I would love to meet one one day and see how the process works and to see what else is similar between English and Chinese stenography.

Until then, I can imagine that somewhere on the other side of the world, there are other students like me typing in chordal fashion on a small keyboard trying to get every word/ character down and to go up in speed.

I'm a stenographer, foodie, and avid traveller who loves to share her experiences with the world.
View all posts by stenoodie →
This entry was posted in Steno and tagged Chinese steno, Mandarin, pinyin, Shorthand, stenograph. Bookmark the permalink.