I don’t know why but the moment I saw this week’s photo challenge of relic, I immediately thought of this photo.  This is a replica of the Globose that exists in the public Anthropology Museum of Mexico that I saw at the Window of the World when I was travelling in China several years ago.  A relic to me means something old that contains a lot of history.  Although I can’t find anything about this Globose on the Internet, I’m sure it contains a lot of history too (lol, sounds so sketchy!).

Here’s what the plaque said: 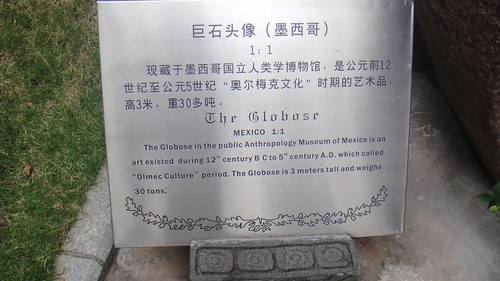 *The Window of the World is a theme park in China in Shenzhen which reproduced a lot of the world’s major tourist attractions in a “mini world” series.  Everything is a replica and tiny so that you can take pictures with it.  It’s sort of like how you can travel the world in a day by seeing the Eiffel Tower, Niagara Falls, New York skyscrapers, India’s Taj Mahal, and more.  I loved it!