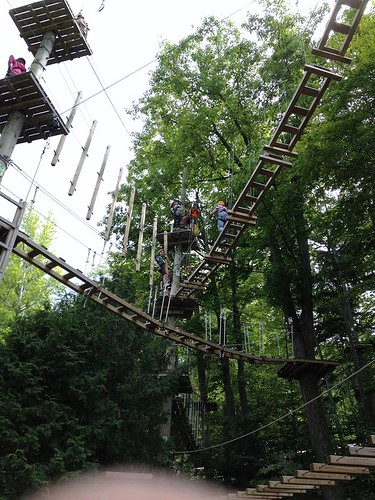 Treetop trekking at Blue Mountain during our summer retreat!

Last weekend, I got the chance to partake in Mon Sheong’s summer retreat with a group of young and enthusiastic upcoming leaders and adventure-goers!  While some of them were already my dear friends who I know from before, I got the chance to meet some new friends as well!  It was a wonderful weekend where two chalets at Blue Mountain Village were rented out and we spent time away from our usual technology/wifi spots (at least for me) to learn how to have fun in team games, spend time outdoors, and learn a thing or two about each other and ourselves.  It was so fun and such a relaxing yet adventurous retreat! 😀 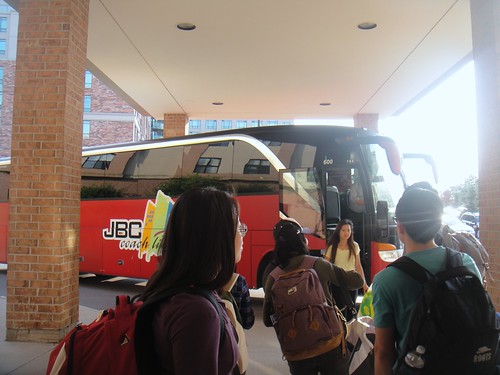 We got a sweet ride this year! Sooo spacious for just 10 of us! So spoiled! 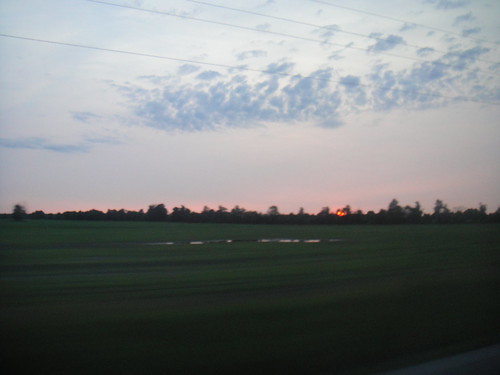 Just like last year, we drove in just as the sun was setting

I won’t go through in detail exactly what we did day by day but we were split up into teams from the very first night that we arrived at the beautiful chalet.  This one wasn’t as big and spacious as the one that we occupied last year when we did the T2C retreat, but it was still such a nice cottage home for us for the three days that we would be spending there.  We did some ice breakers and games on the first night and settled in.  I loved the chalet that we had this time for the reason that it was like a hotel — all the sheets were clean and everything was furnished like a hotel room. 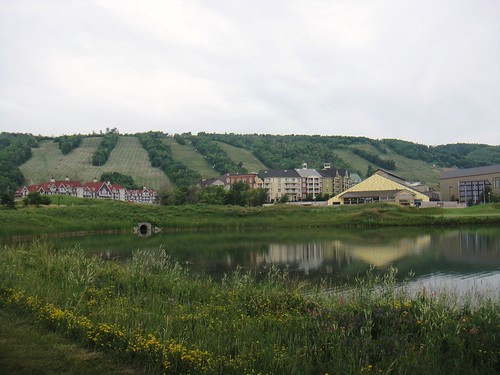 Blue Mountain in the summer time 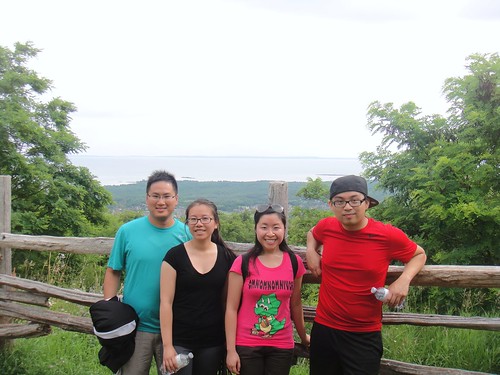 Team Chatime at the top!

In the morning after breakfast, we set out to hike up Blue Mountain.  While hiking up, we had to solve a series of puzzles in our teams.  The hike up the mountain was a little strenuous but once we were up there, it was worth it.  It was beautiful and cool!  We couldn’t have asked for a better weekend — I liked it being not too hot.  This summer so far in Toronto hasn’t been very hot or humid but rather cool and around the 20 to mid-20 degree mark.  We took the gondola back down before we made lunch.  In the afternoon, we traveled to the beach to do some more survival-themed games.  The games were very similar to the ones that we played last year. 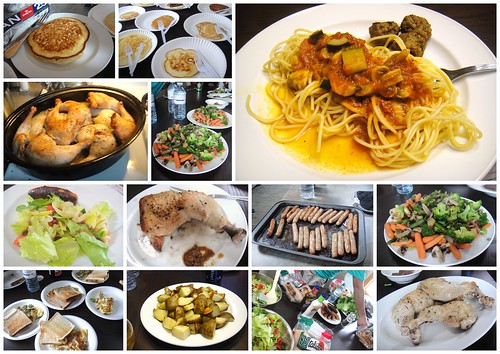 All the good food we had on the trip.  We took turns cooking and cleaning up 🙂

The best part about this trip was that we did treetop trekking!  I’ve never done it before and have always wanted to try it.  This was actually the whole reason why I signed up for this year’s retreat — once I saw that it was so cheap, $120 for the whole weekend which included accommodations, food, and transportation, AND the treetop trekking experience, I knew I couldn’t lose out on this.  I’m SO glad that I went because I absolutely loved treetop trekking.  We ran into a bit of a hiccup when we went in for our booking, however.  After we had all strapped in to the gear and approached the hill where the treetop trekking obstacles were, it started to rain.  It started off as a sprinkle here and there but by the time one of the staff members was explaining to us how to go through the gears and pulleys, it was raining HARD.  There was even a thunderstorm warning and after about 5 minutes of waiting in the rain (some of us being soaked through to the skin), we were informed it would be better to come back later in the afternoon.  Some things happen for a reason and we can’t tell nature to stop its rain so we decided to go for lunch instead!  A couple of us went to Mile High Poutine for lunch. 🙂 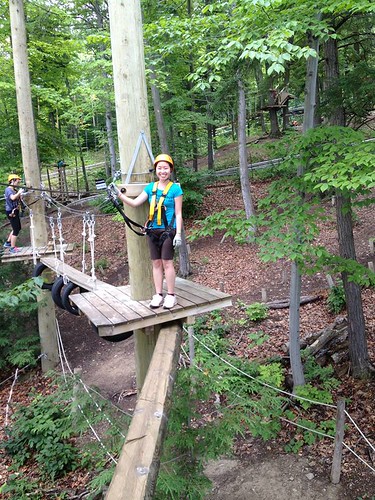 Me on the course! Thank you Tim for the photo!!

After lunch, we strapped on our gear again and proceeded towards the Timber Challenge High Ropes course.  After we learned how to hook in our gear to climb a ladder, we were off.  We had three hours from that point onward to go through the green, blue, and black courses as we desired.  It started off exhilarating and not too scary since the green obstacle included free-walking (with a harness of course) on planks of wood in various attachments.  It ended off with a fun zip-line to the ground.  I love zip-lining!!  During the next 2 hours, I found myself on the higher levels of the blue course where I hung on to hanging wooden pegs and mere ropes to get myself across from one platform to another.

Can you spot me? I’m up there hanging on to the wood lol

I remember that first difficult course clearly because as I was walking across planks of wood to get to the next platform, there was a Caucasian girl hyperventilating at the top of her lungs about how she wouldn’t be able to make it across that specific obstacle.  Everyone around her was encouraging her and instructing her on how to get across.  Slowly but surely, she was able to get across.  Phew!  After this girl, there were two Asian girls who also showed a lot of fear and hesitation in getting across this obstacle.  It made me really nervous about if I could do it too.  The hard part was the first step where you had to take one of your feet off the platform in the mid-sky and land on the first wooden peg.  For us Asian girls who are short, it was a big leap (of faith[!])! But like the first girl, after a bit of hesitation and slow-going, they were gradually able to make it across to the next platform.  I was still very nervous about it at this point but I thought to myself:  If they could make it across, I KNOW I will be able to as well.  After a little slow start, I was able to hang on to the first wooden peg and get across to the next one… and then the next one… and the next until I reached the last wooden peg.  Yay!  It wasn’t as hard as I thought it was.  I felt very accomplished after that and knew I could do it if the person in front of me did it.  Hehe.  After that, I absolutely loved the zip-lining parts and scurried over to the next obstacles with not too much difficulty.  I was just about done after I scaled across the rope net obstacle since my forearms were so, so tired from grasping and holding on to the ropes.  I was done after that.

We didn’t win but we still had fun 🙂

Yay!  So that was my first treetop trekking experience!

After we hydrated ourselves with some Gatorade and grabbed a little dinner on the go at The Pottery Restaurant, we rode the coach bus back to Markham and home.  What an amazing weekend this was! 🙂  Thank you, Mon Sheong, for giving us this opportunity to have a fun weekend and thank you to the leaders for organizing a great trip! 😀 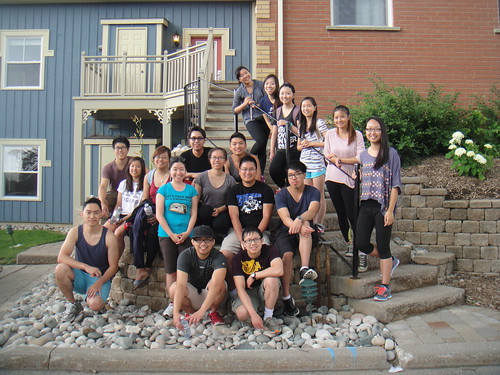