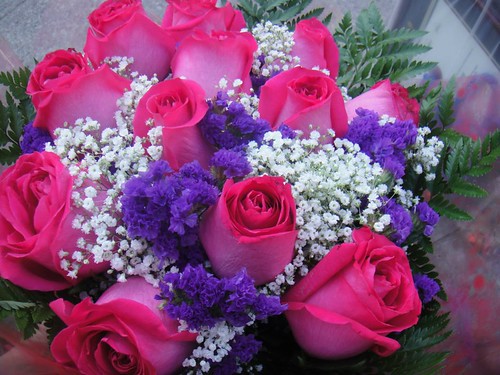 Undergraduate convocation, U of T. June 2012

Achievement to most people is earning a specific level of education, game, acclaim, or quite simply an attainment of a previously set goal.  Achievement is partnered with ‘success’ where we think that once we achieve something, we are successful.  But every person’s belief of what achievement is is different and relies on what that person deems as important.  For some, like I mentioned, this could be graduation, winning a level of Candy Crush, earning a star on the Hollywood Walk of Fame, or achieving a certain level in an X number of months.

For this reason, the photo I’ve chosen for this week is rather vague but actually can signify achievement for all people — a bouquet of roses!  I got this  specific bouquet when I had my convocation for my undergraduate studies from university.  It was the first that I had achieved a degree so it is fitting for me to call this an achievement.  Nowadays, receiving a piece of paper proclaiming that I have earned a degree in whatever subject may still be an achievement to some, but in my opinion not one that can really move anyone forward in life.  Nowadays, achievement to me means earning time freedom and financial freedom.

I'm a stenographer, foodie, avid traveller, and new mom who loves to share her experiences with the world.
View all posts by stenoodie →
This entry was posted in Weekly Photo Challenge and tagged achievement, examples, graduation, life, milestones, postaday, weekly photo challenge. Bookmark the permalink.