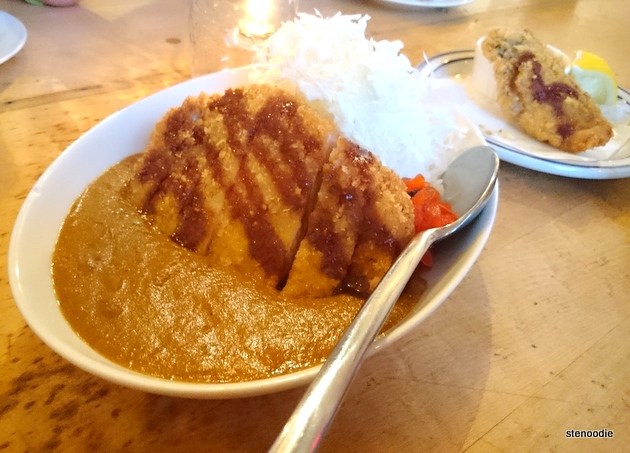 Four food enthusiasts and I went for dinner at Imanishi Japanese Kitchen on a Saturday evening.  Imanishi Japanese Kitchen is located on 1330 Dundas Street West in downtown Toronto.  It’s a small casual restaurant where you can share Japanese tapas with friends.  Their sign doesn’t actually say the name of their restaurant.  Instead, it shows “Cafe Regional Bar & Grill” with only a tiny print on the glass showing their actual name.  For this reason, you might actually miss this restaurant when you are strolling down Dundas Street West.  Just be mindful of the number 1330 before you enter to ensure it’s the correct restaurant and you’ll be fine. 🙂

We had booked our dinner for 6 p.m., but due to traffic coming down from Markham, it took us 30 minutes longer than expected.  Thankfully, we were still able to dine in until 8 p.m. 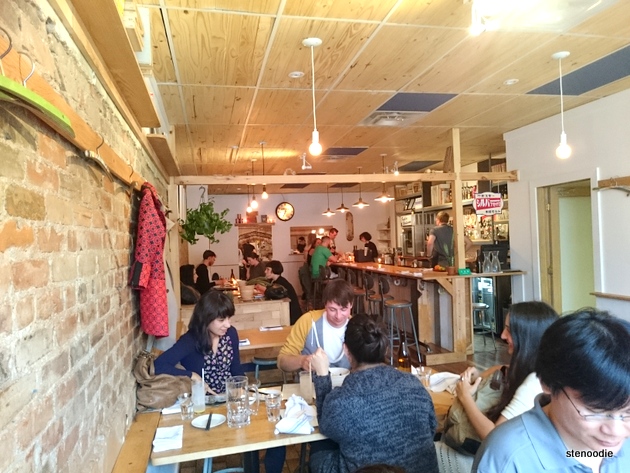 Look at their handy coat hangers on the ledges of the exposed brick walls. So smart!

I really liked the casual and down-to-earth feel of Imanishi Japanese Kitchen.  The exposed brick wall was not only a nice accent but there was a slight ledge for you to hang your belongings on with provided coat hangers.  It was very considerate and neat!  I also liked how there was a tiny ledge between the wall and the table for you to put something small, like a thin purse or your phone.

Their menu was very simple, with a rather abundant list of Japanese tapas and a few small meals, called “teishoku”. 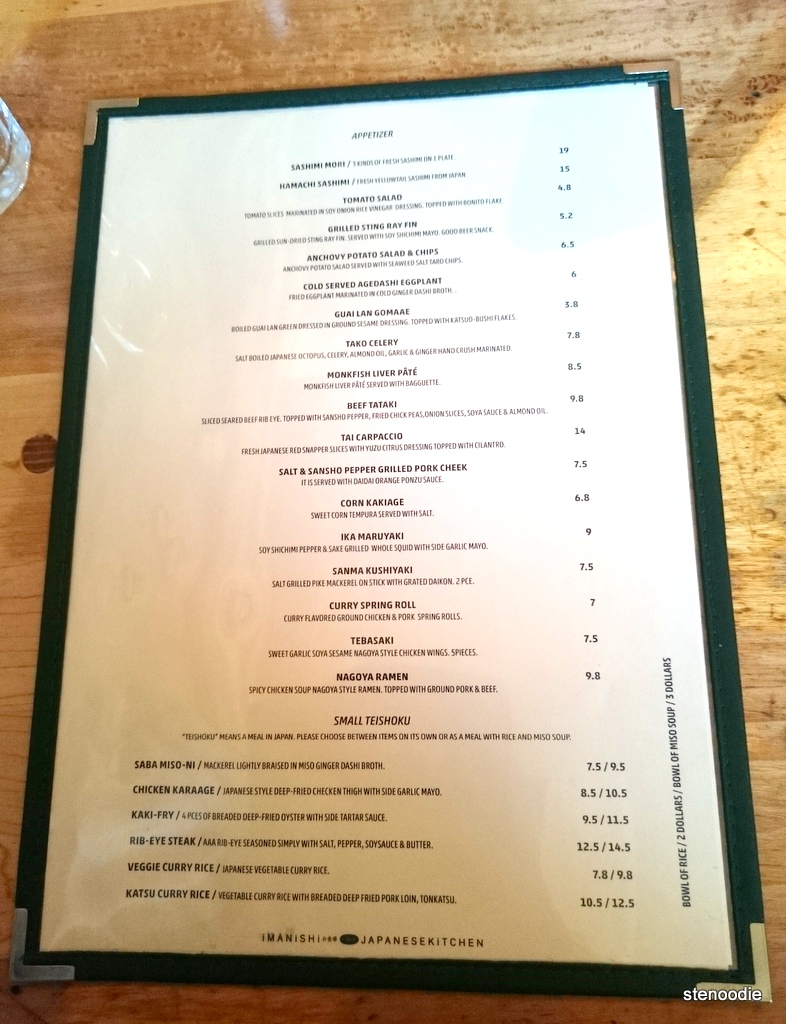 We decided to share a few tapas first and then consider ordering more if we didn’t have enough.

The tapas arrived rather quickly by the attending server who was pleasant and calm throughout the entire night.  The tapas were all very small portions. 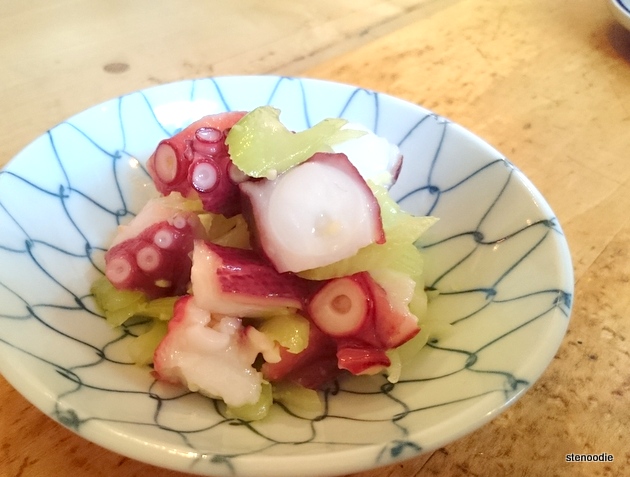 The first to arrive was the Tako Celery, a salt boiled Japanese octopus with celery,  marinated with hand crushed garlic and ginger, and almond oil.  For some reason,  based on the name, I imagined that the octopus would be cut up and served on a celery stem, but it was just simply cut up celery and chunks of octopus in a bowl.

I liked the texture of the salt boiled octopus.  It was firm but not too chewy.  The celery was softened from the almond oil and marinate so that it wasn’t crunchy like usual. 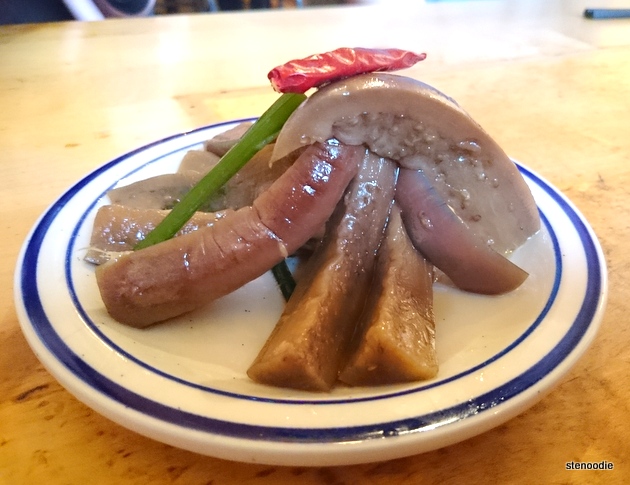 The Cold Served Agedashi Eggplant was a fried eggplant marinated in a cold ginger dashi broth.  It was presented very nicely on the plate like a teepee.  The long slices of eggplant were cold, thoroughly marinated with the dashi broth and firm.  It was a very refreshing tapa.  However, for $6, I think this was too steep for just cut-up pieces of eggplant. 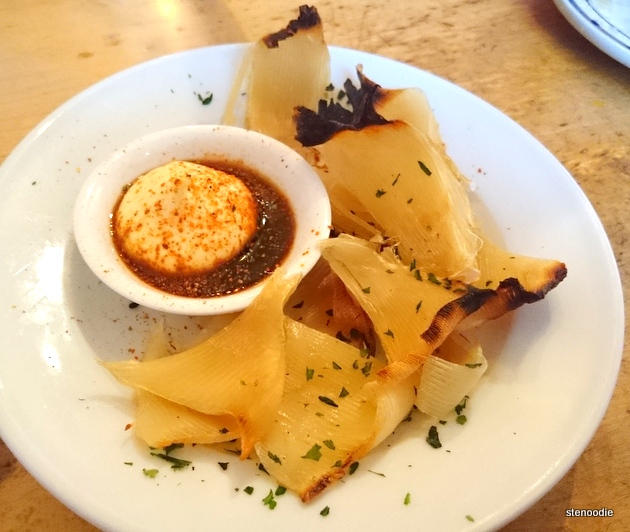 The Grilled Sting Ray Fin was definitely a unique and outstanding tapa that I’ve never seen before in other restaurants.  It was a grilled sun-dried sting ray fin and served with soy shichimi mayo.

Anh had had this tapa before and she said that the sting ray fins weren’t so burnt last time.  In my opinion, if a restaurant sees that their food is burnt to a crisp at the ends, they should re-do the dish before serving it.  However, perhaps this is something they intended to do and to make it look more “colourful”.  It was definitely a nice-looking dish with the grilled sting ray fins all pointing upwards with the contrasting dish of mayo to the side.

We all felt that the grilled sting ray fin tasted like one of those dried cuttlefish snacks that you find in a Chinese market.  Its chewiness definitely reminded me of that and I didn’t find it was much unique otherwise.  I did really enjoy the soy shichimi mayo, however. 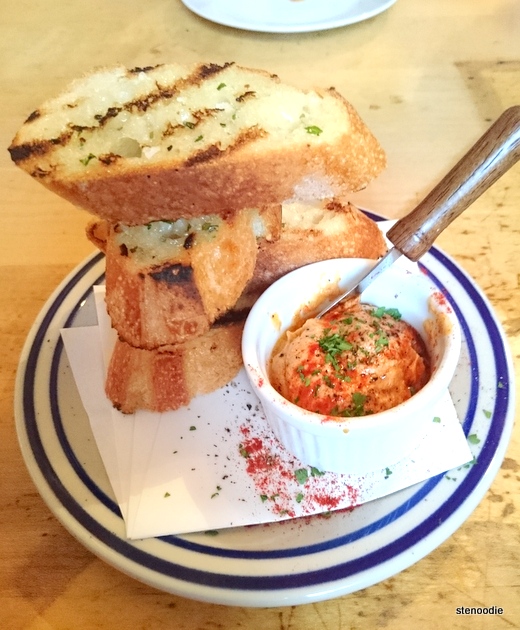 The Monkfish Liver Pâté  was definitely one of my favourite tapas of the whole night!  It was monkfish liver pâté served with four baguette slices (that seemed to have some garlic on it too).

I really enjoyed this one because the baguette were perfectly toasted with garlic on top (I love garlic bread!) and the monkfish liver pâté was so creamy and tasty!  However, I couldn’t distinguish any monkfish liver taste in the pâté…  I think they must have mixed it with some mayo because its consistency and texture definitely tasted more like mayo instead of actual pâté. 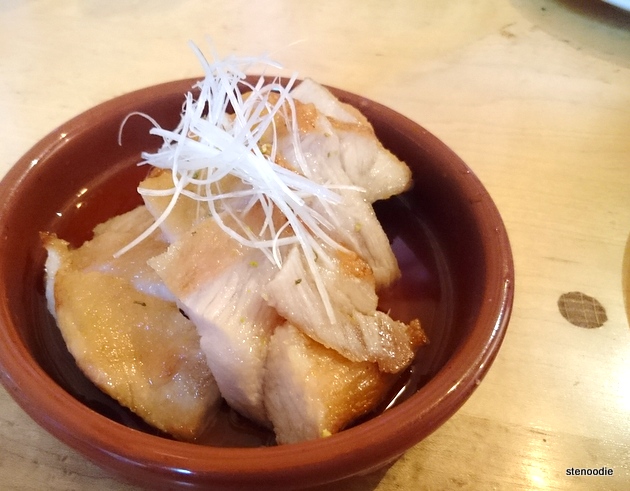 The Salt & Sansho Pepper Grilled Pork Cheek was my absolute favourite tapa of the night, and almost everyone agreed so too.  This was served with daidai orange ponzu sauce.

This arrived in a little dish with the flakes of grilled pork cheeks laying against each other and the ponzu sauce resting underneath.  The pork cheeks were absolutely fantastic texture-wise since it was a little bouncy and chewy but tender.  The slight flavour of the ponzu was delicious with the pork cheeks! 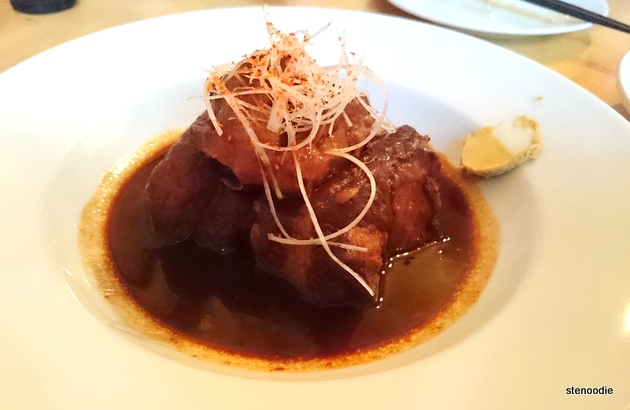 A special of the night was a Pork Belly.  We tried it out.  It was served with some Japanese mustard on the side.

I found that this tapa was a bit mediocre.  It tasted like the Chinese style of braised pork belly, and even the tangy sour sauce was similar.  I thought that the contrast of the sharp Japanese mustard on the side made it more uniquely tasting. 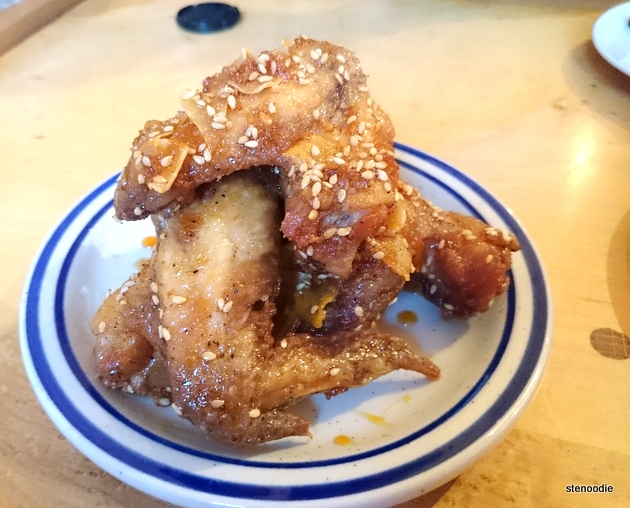 The Tebasaki were sweet garlic soya sesame Nagoya style chicken wings and came in five pieces.  These were arranged in a tower-like presentation and wonderful to photograph.. especially with five foodies at the table :P.

I actually really enjoyed these.  I am a big fan of fried chicken and chicken wings so these were great because of the sweet garlic soya flavour together with the nice tender meat in the chicken wings.  Yummy!

After this, we had reached the end of our first order.  We decided to order two more things to try out more from the menu.  This time, we ordered the Small Teishoku (small “meals” which either could be served alone or with rice and miso soup).  We ordered two of these small meals without the rice or miso soup. 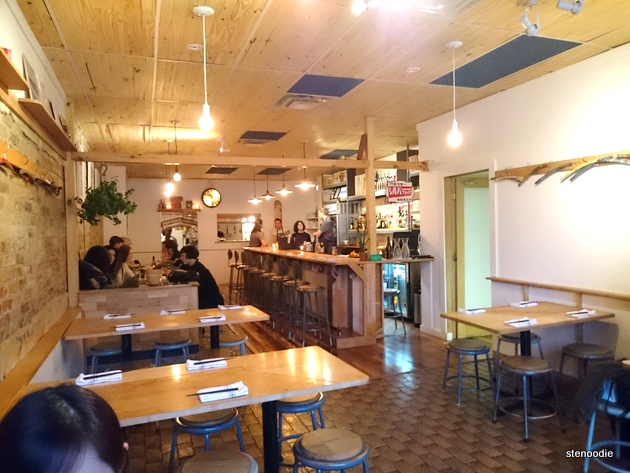 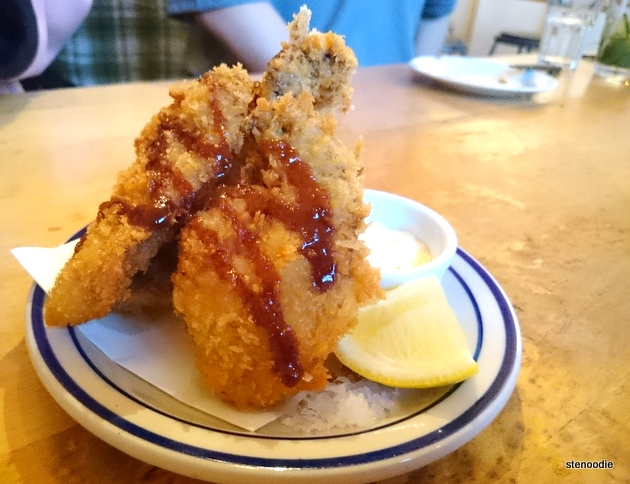 Kaki-Fry. $9.50
-4 pieces of breaded deep-fried oyster with side tartar sauce

The Kaki-Fry were four pieces of breaded deep-fried oyster with tartar sauce on the side.  Mmm, these were absolutely delicious!  The oysters were perfectly breaded and deep-fried so that the oyster remained juicy and soft while the exterior was crispy.  They didn’t overfry the oyster either which made it so delicious!

The tartar sauce was also delicious with chunks of onion in it. 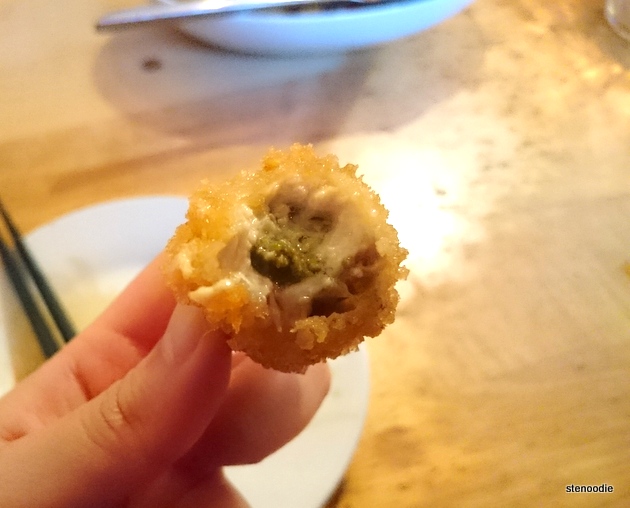 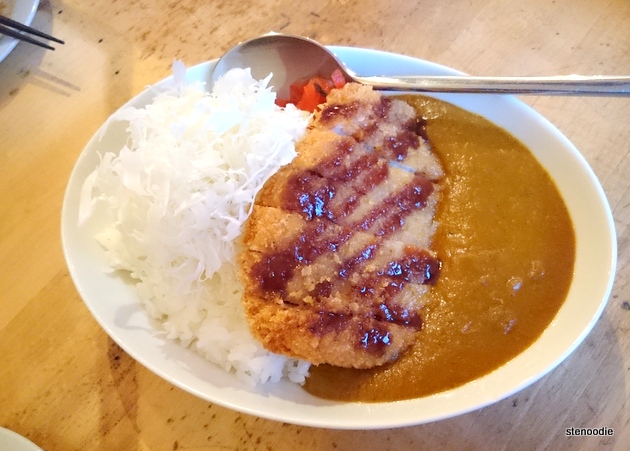 The presentation of this was very nice and the portion of this meal was finally reasonable.  (Everything else we had had that night were definitely small-scale snacks!) I liked how the shaved cabbage was placed on the side, cascading into the arrangement of tonkatsu before the “ocean” of vegetable curry in the dish.  There was white rice underneath the dish.

The tonkatsu was pretty good, but the vegetable curry really won me over.  The vegetable curry was very thick, just like how Japanese curry should be, and slightly spicy which gave it a definite edge.  The cabbage shavings were unique in texture; very prickly and small.  The rice went well with the curry.  I can definitely see this as a lunch menu that people working around the area would come to enjoy. 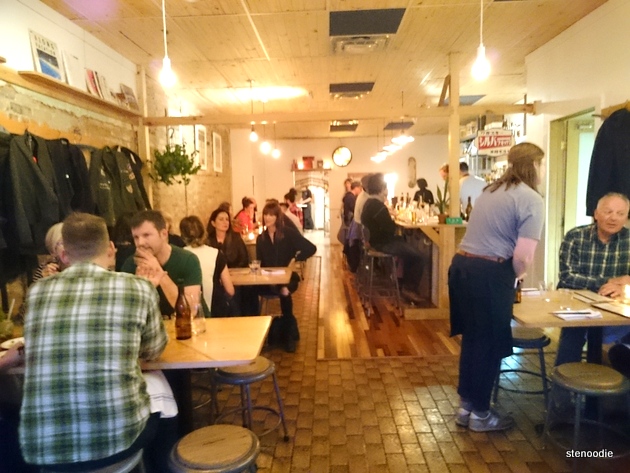 The restaurant was packed as we left just after 8 p.m.

Alas, that was the end of our foodie meal at Imanishi Japanese Kitchen.  I was surprised to learn that they were in the top 10 restaurant list of Toronto in 2016.  I really couldn’t see much that would make them outstanding enough to be #4 in the top 10 restaurant list, but it was a nice Japanese meal.  The tapa portions were small and meant to be shared, and only a few items on the menu were worth their price.

Have you been to Imanishi Japanese Kitchen before?  What was your experience like?  Leave your comments below. 🙂 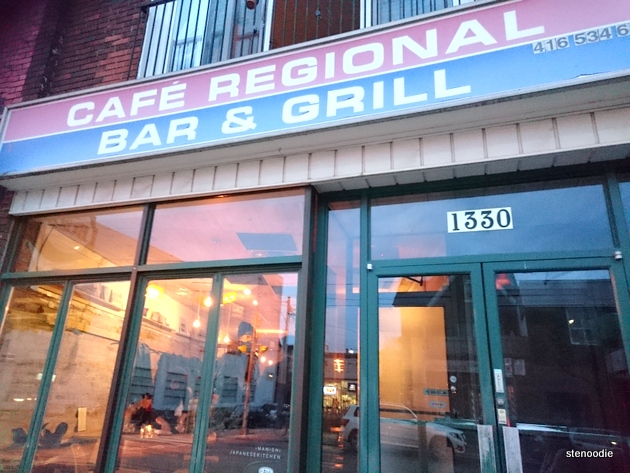 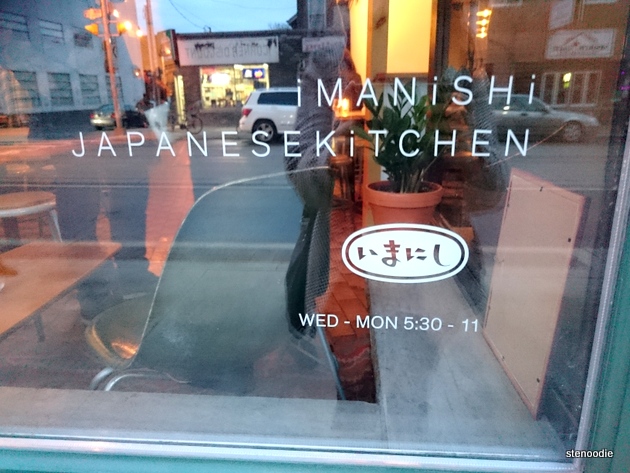