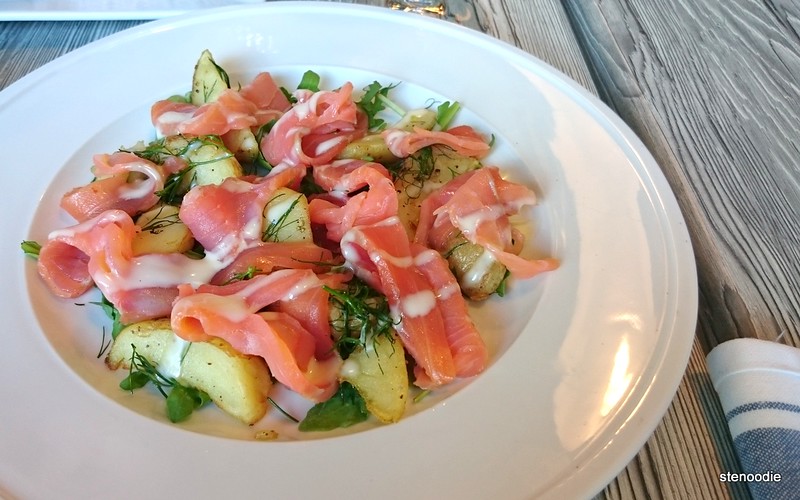 Located at 6140 Main St in Whitchurch-Stouffville

What a pleasure it was to dine at The Smokery Kitchen & Bar in Stouffville for dinner this past Monday!  Chris, the owner of the restaurant invited me for a restaurant tasting since they are a relatively new business in the Stouffville area that specializes in house made everything.  They feature BBQ, smoked foods, corn bread, desserts, craft beer, and cocktails.  They are located on Main Street in Stouffville.  Stouffville seems to be booming with a lot of great food lately.  This little town is one of the fastest growing communities in Canada and they are sure to attract a lot of foodies into the area as well! 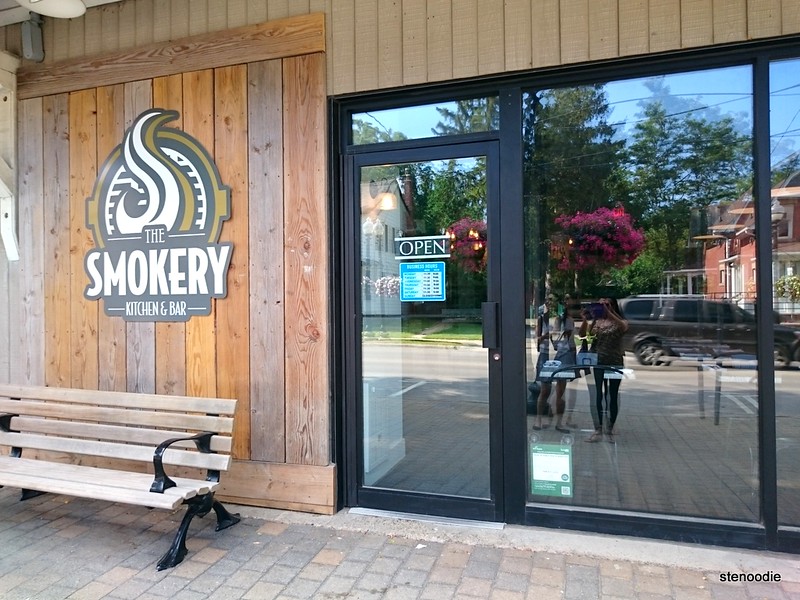 It’s one of the restaurants on Main Street. It’s not hard to find and there is a lot of street parking available!

Tracy and I arrived at 5 p.m. and greeted Chris.  He introduced himself, told us a little bit about the restaurant (he opened it 10 months ago), and is still experimenting with the tastes and flavourings of what the customers like and want to try.  Chris has a background in culinary and specifically in French cuisine.  He gave us the food and drink menus to peruse but informed us that he already had a tasting menu set out for us so that we could try their specialties.  Awesome!  I was so excited! 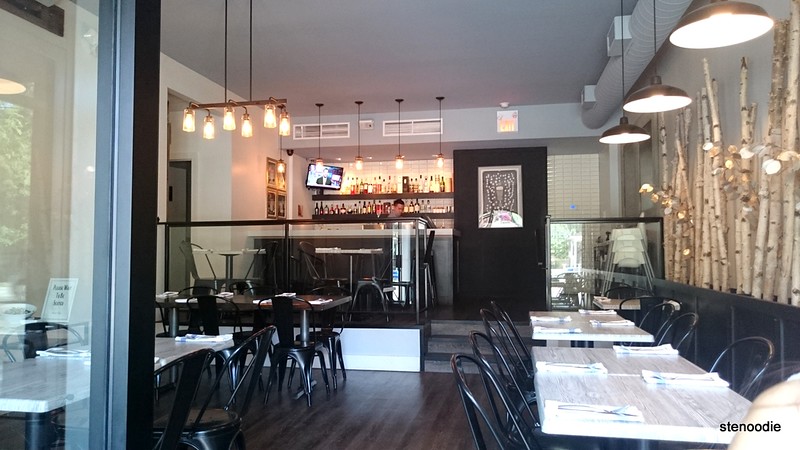 A beautiful and modern restaurant. They also have a room near the entrance of the restaurant where you can host private functions 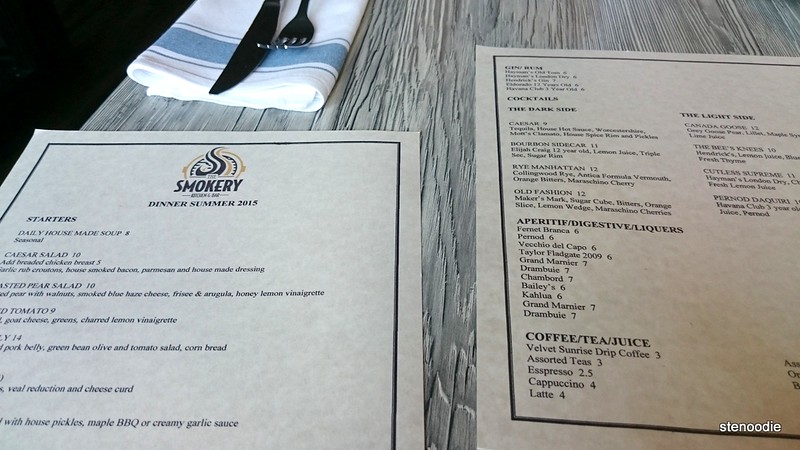 Food and drink menus. They currently have a summer menu — their menu changes to reflect the fresh produce and season

As I told Chris, I wasn’t expecting The Smokery to be as nice as it was.  From the e-mail, I actually expected a grungy and really low-key environment where people come for burgers, ribs, and beer.  The atmosphere at The Smokery is casual yet sophisticated.  It is clean, modern, and sleek.  It is a great place for a casual dinner but also for a special night out.  As I soon found out that night, the presentation and details of their food are completely well thought-out and fit for a 4 or 5 star restaurant.

For drinks, we tried two popular cocktails that Chris recommended.  The Smokery is also known for their craft beers, bourbon, and wines.  I enjoy cocktails as I like to see what the restaurants come up with in terms of creativity and uniqueness. 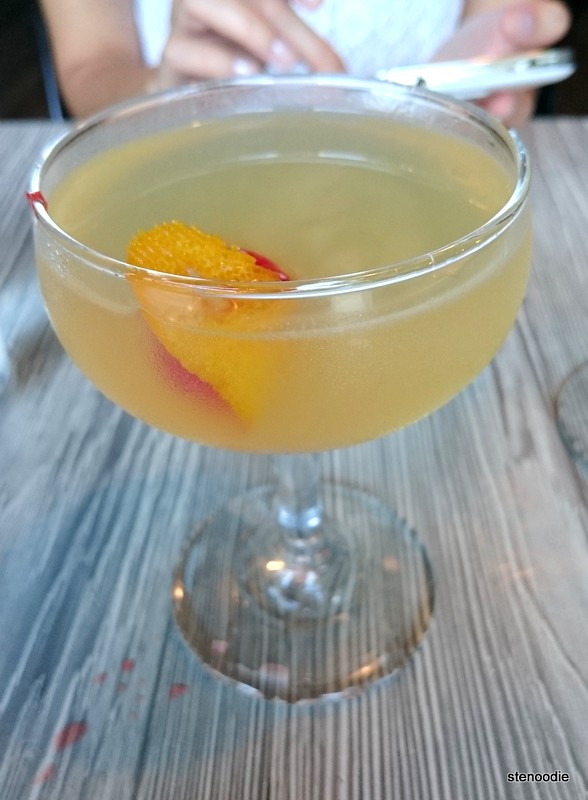 One of their popular cocktails is called a Canada Goose and contained Grey Goose pear, Lillet, maple syrup, and fresh lime juice.  It came in a short glass and I definitely tasted the sweet maple syrup in it.  It’s quite unique to have maple syrup in a cocktail and I liked how it was refreshing as well. 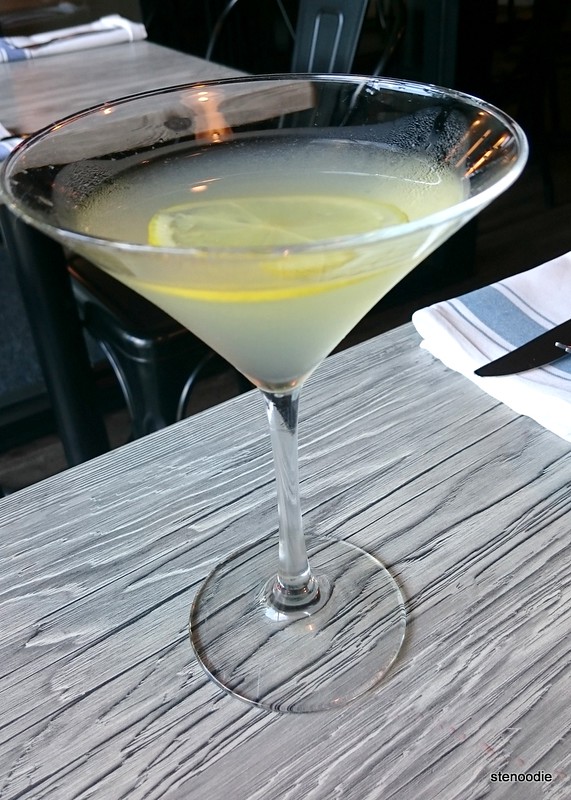 Tracy chose The Bee’s Knees.  Chris told us that they actually use local honey and that much of their ingredients are from the farmers in the area.  This cocktail contained Hendrick’s, lemon juice, blueberry honey, and fresh thyme.  This one wasn’t as strong as the Canada Goose and it was quite light.  The lemon juice was very obvious in the cocktail.  I liked the Canada Goose better than this one, but both were actually good to start off for a meal since the lemon and lime juice helped to open the appetite.

Our first two tastings arrived together.  This was a gorgeous and generous portion of two appetizers!  One was a Smoked Salmon and the other was a Smoked Tomato — ahh, I can see why they are called “The Smokery” now ;). 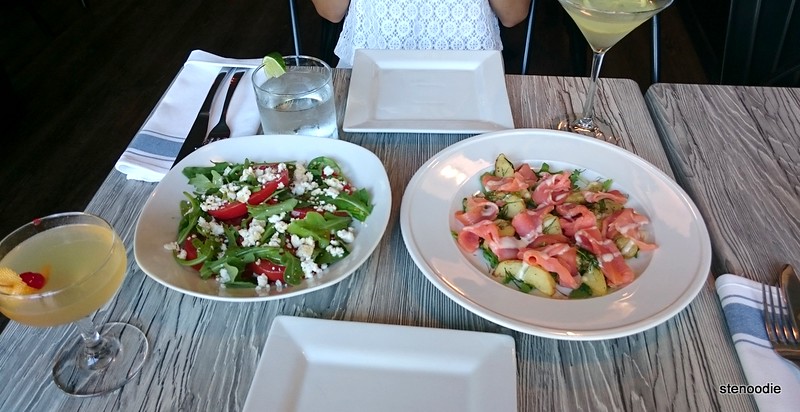 The Smoked Salmon is house cured and came with a new potato and dill salad and lemon aioli.  This was absolutely a gorgeous dish and I couldn’t wait to try it.  Smoked salmon is actually one of my favourite things to eat and I was so thrilled that there were so many pieces on the plate!  Their menu shows that this is a $13 dish and I would have to say that this is a lot of smoked salmon for that price.  Super awesome! 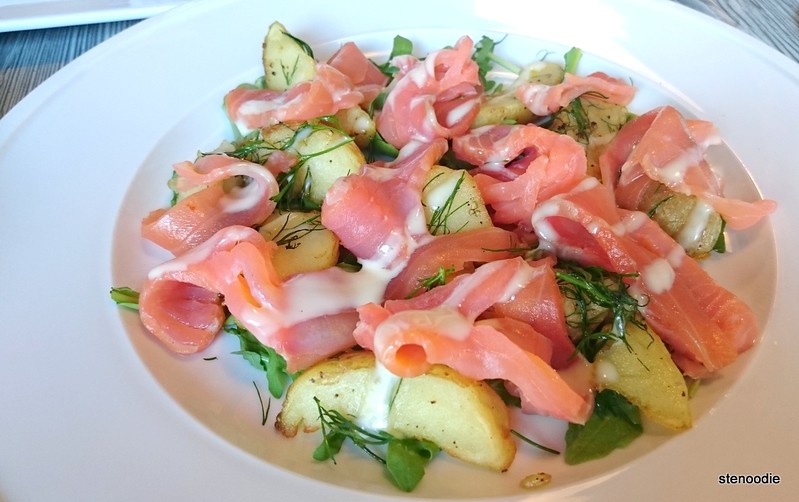 I thought this dish was unique because I’ve never seen smoked salmon paired with a potato and dill salad before.  It actually worked well because the potato chunks were soft and balanced well with the saltiness of the smoked salmon.  The light dill and lemon aioli also gave the smoked salmon and potato more flavour.  I loved this dish! 😀 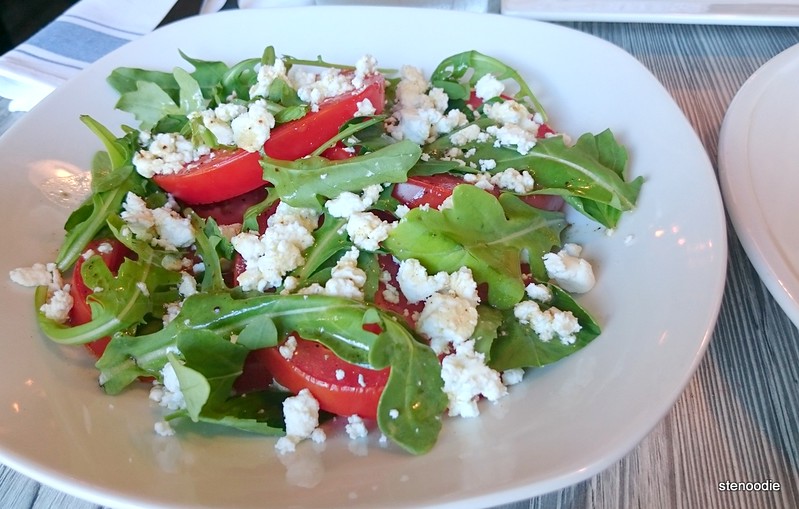 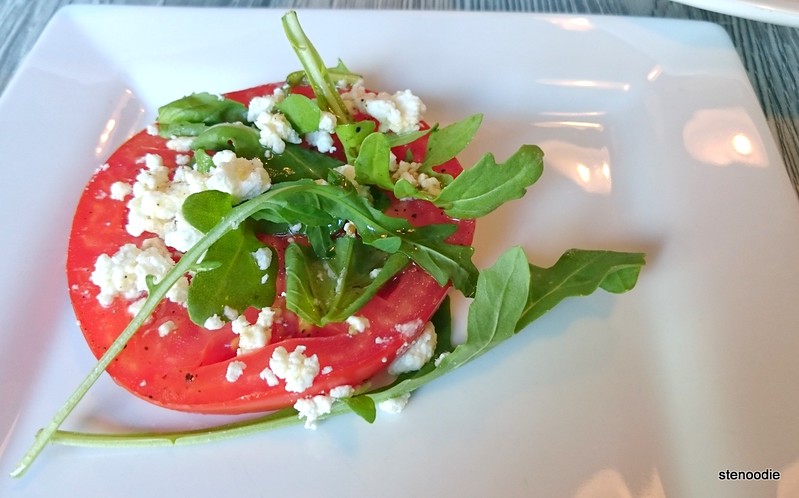 That is a huge slice of tomato! So fresh and simple 🙂

The other appetizer we had was the Smoked Tomato.  This contained torn basil, goat cheese, greens, and a charred lemon vinaigrette.  It’s hard to see from the picture as all the cheese and greens are covering it but this actually contained four big slices of tomatoes.  You could eat each slice on your sharing plate and it is topped with lots of goat cheese and greens.  I also love goat cheese and I was more than happy that there were so many cheesy chunks in this dish.  Yum!  The tomatoes were so fresh and juicy.  This was also a really great appetizer.

So far, I was impressed.  Not only was the presentation great but the taste was really good too.  Tracy and I were quite content and excited for the rest of the dishes.

Our main entrees!! What a beauty

Chris brought out two plates which featured their most popular BBQ meats and Southern dishes.  One plate contained the Coffee Beef Brisket (so unique already!) and the other plate contained their Honey Fried Chicken and Pork Ribs (cola braised and smoked).  The sides included sauteed green beans, mashed potatoes; and cabbage slaw, corn bread, and house pickles on both plates.  This was an incredible selection of food.  I felt so grateful and blessed to have this opportunity to try so much great food!

I tried the corn bread first.  I am a fan of corn bread and they definitely made it right here.  It was not dry and just moist enough with a decent ‘corn bread’ taste.  I really liked it! 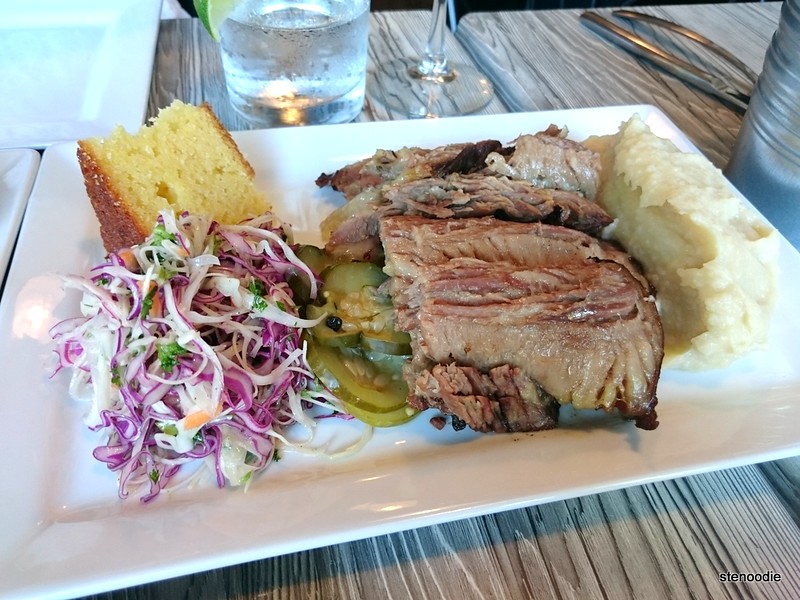 The Coffee Beef Brisket was mouth-wateringly tender, soft, and SO good!  Each slice was full of slow smoked goodness with a touch of spiced coffee rub.  As Chris mentioned, they really do smoke their meats here so that you can tell the flavour is from 8 hours of smoking and not partially smoked.  The coffee taste wasn’t very obvious to me, but you could taste it subtly.  I couldn’t believe how good it was.  It was pretty much as delicious as the famous Schwartz smoked meat in Montreal that a lot of people know and love.

I liked the mashed potatoes.  The consistency was a little mushier than most, but it had a great flavour to it.  Also a mashed potato done right! 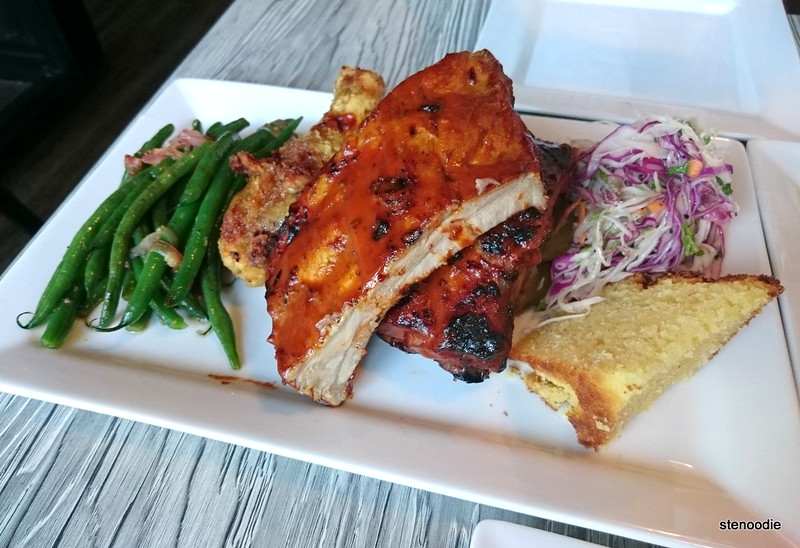 The Honey Fried Chicken had terrifically crunchy skin that tasted just a little sweet (hence the honey), but not too sweet.  The dark meat was so moist inside.  This was a delicious fried chicken!  (It seems like I am raving about everything but that’s because it really was that great.)

The Pork Ribs were cola braised and smoked and really good.  They didn’t fall off the bones exactly but they were uniquely spicy (a little bit) and saucy with a house made barbecue sauce.  This was pretty good too. 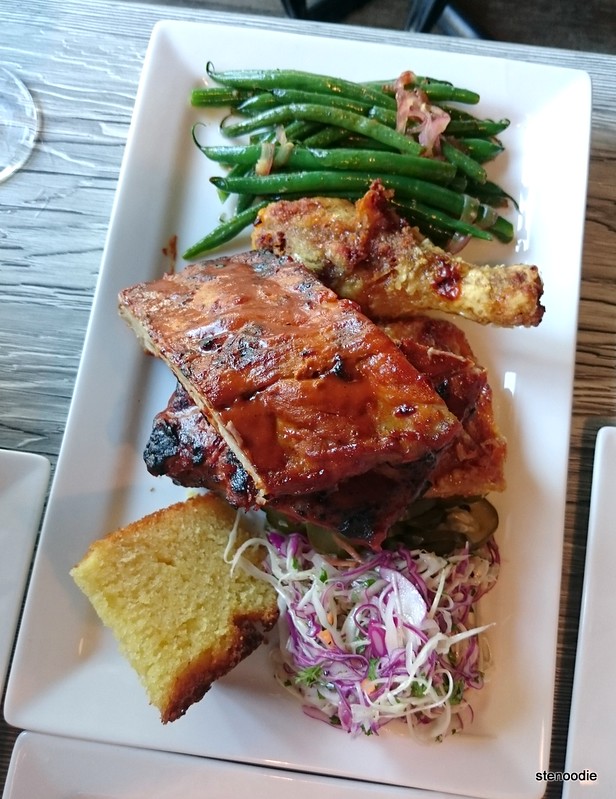 Another view of the Honey Fried Chicken & Pork Ribs

In terms of the other sides, the green beans were perfect.  They didn’t taste “old” like some places make it and was a great side to have when you are eating so much meat.  I also liked the cabbage slaw; it contained just enough sourness to it to counteract the meat’s acidic nature.

Since Chris was such a great host and served so much great food for us to enjoy, we really couldn’t finish everything — there was a lot of food!  I was able to pack it up to enjoy at home later. 🙂

For dessert, we were also thrilled to receive all three of the desserts that they offer at The Smokery.  They have a Vanilla Bean Creme Brulee, Lemon Strawberry Cheesecake, and an amazing creation called Lindt Chocolate Smore.  I love how their entire restaurant put a lot of thought into their items and made everything in line with the smoked and BBQ theme (some restaurants have a bit of mishmash cuisines here and there) so I liked how all the courses fit together. 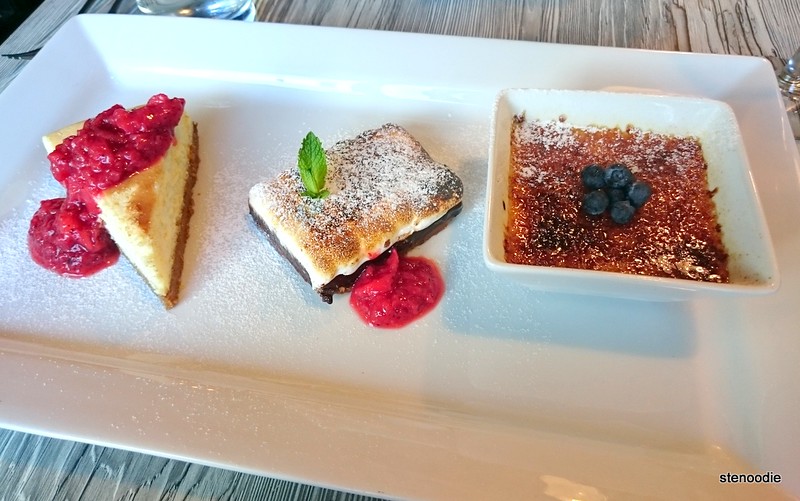 Time for dessert! Just look at this sample ^_^

Our dessert sampling was, again, out of this world.  Just look at the above picture and your stomach automatically makes room for dessert even though you might be really, really full already (that’s what we were already). 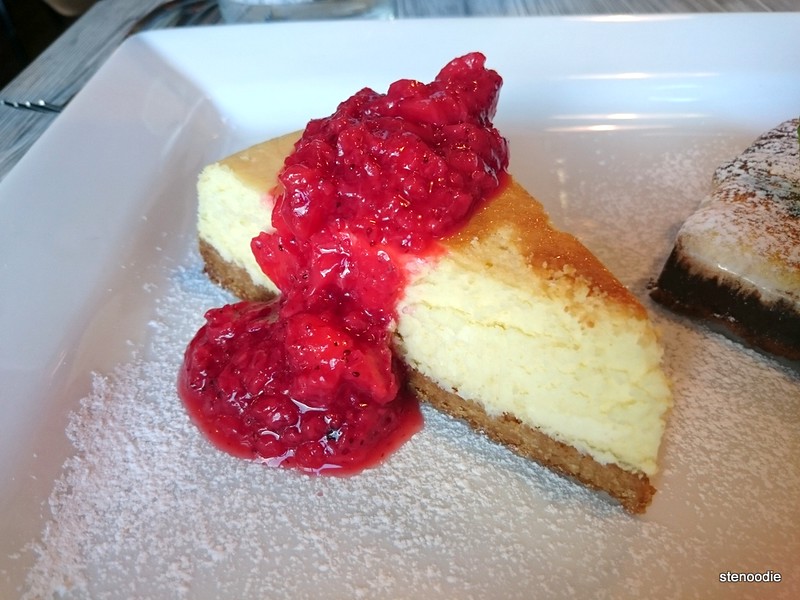 The Lemon Strawberry Cheesecake was very dense and rich.  It contained the richness of a Japanese cheesecake but a traditional graham crust at the bottom.  The fresh berries were indeed fresh.  We definitely couldn’t finish this one because it was so rich. 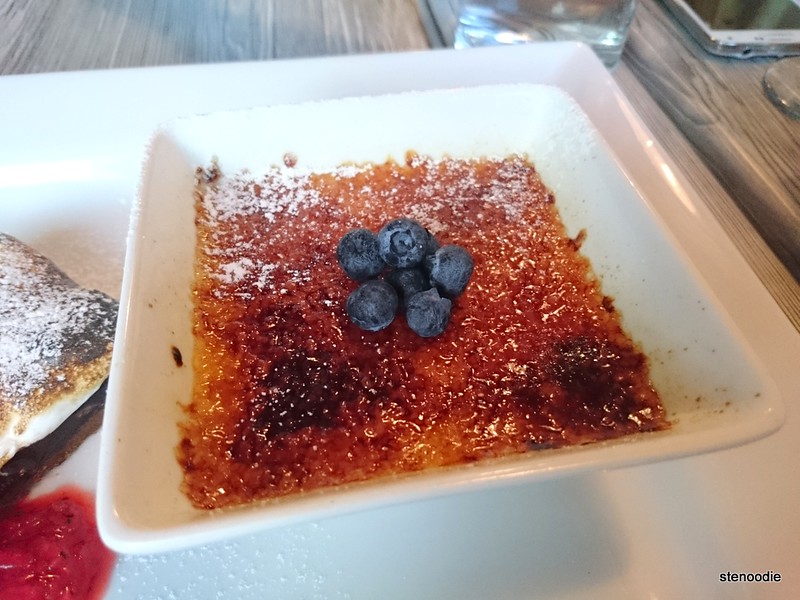 The Vanilla Bean Creme Brulee had a crunchy glazed top with some stewed blueberries on top of it.  Tracy liked how light this creme brulee was and I did too.  It was pretty good! 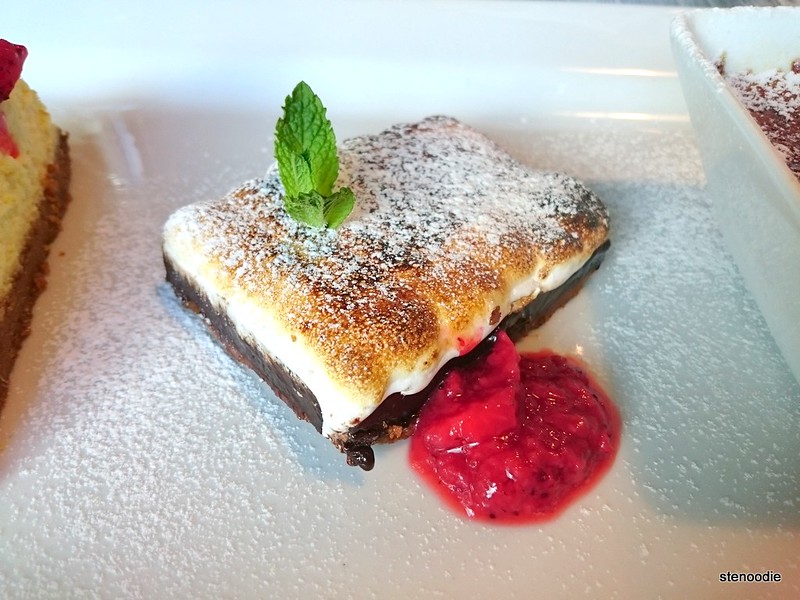 I saved the last to talk about because I really enjoyed this dessert.  The Lindt Chocolate Smore was nothing like I’ve ever had.  It combined a layer of chocolate ganache with a lightly toasted marshmallow top (you can see the melted parts that resembled just like a s’more when you go camping) and a Graham cracker crumble (this was so crunchy and added to the texture of the entire dessert).  It was such a well made dessert and was also very rich too.  The chocolate ganache was fantastic.  This is definitely a dessert that you should share with somebody because you can get full from it really quickly!  We finished it though because it was so good. 🙂 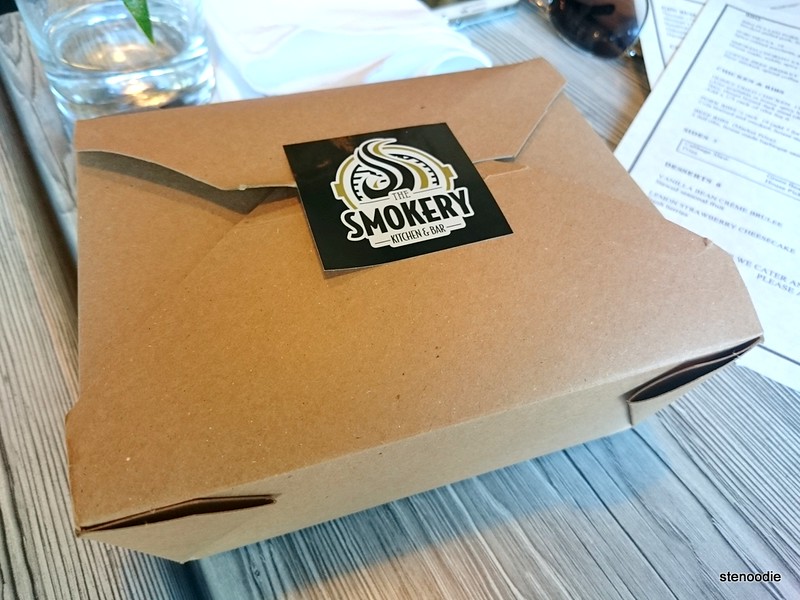 Getting to take the BBQ and meat home to enjoy! I also took the rest of the cheesecake home too 🙂

Alas, that was the end of our tasting at The Smokery.  There wasn’t anything else we could ask for.  The service was terrific, the food was delicious, the presentation was worthy of a LOT of pictures (I had a hard time choosing which pictures to include), and it was just a really great night.  We were also able to chat with Chris to learn more about his story and how the restaurant came about.  It was a really good night!  It turns out that we enjoyed our meal for four and a half hours that night; leaving at 9:30 p.m. — we were the last customers to leave. 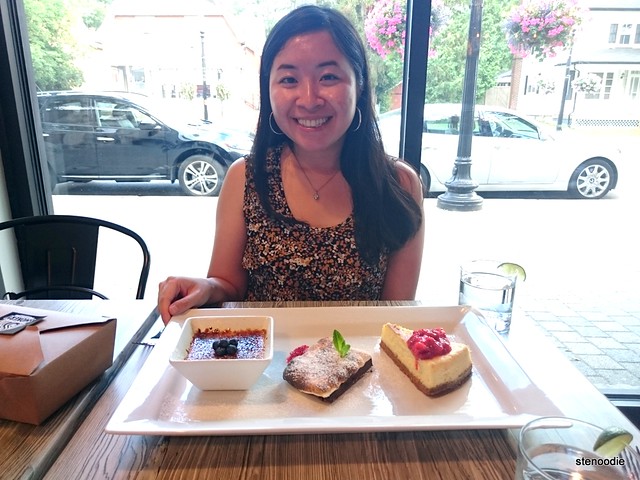 Thank you Chris and the chefs at The Smokery!

If you live close to Stouffville or actually in Stouffville, you absolutely should visit The Smokery.  It is not a typical smoke house with burgers and food.  It definitely incorporates the French cuisine background that Chris has and makes the food unique and foodie-worthy.  I wouldn’t be surprised if this place gets many more customers in the future once more foodies know about it.  Spread the word! 🙂

FTC Disclaimer:  Although The Smokery Kitchen & Bar reached out and invited me to a complimentary tasting to review their restaurant, the opinions expressed here represent my own and not those of the restaurant.