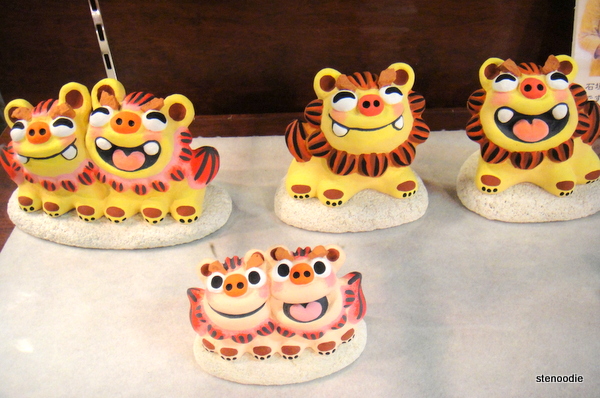 “Shisa is a traditional Ryukyuan decoration, often in pairs, looking a cross between a lion and a dog, from Okinawan mythology.  People place pairs of shisa on their rooftops or flanking the gates to their houses.  Shisa are wards, believed to protect from some evils.  When in pairs, the left shisa traditionally has a closed mouth, the right one an open mouth.  The open mouth wards off evil spirits, and the closed mouth keeps good spirits in”. (resourced from Wikipedia)

These two are partners in crime and help to ward off evil for the Okinawan people in Japan.  I took this photo of cuter versions of shisa at the hotel’s souvenir shop when I was in Okinawa in December of 2011.

Two heads are better than one; together is always better (fitting well physically, emotionally, spiritually). 🙂

It’s also been said that you have to purchase these together as a pair if you do intend on purchasing.  Otherwise, it’s considered unlucky to buy just one.

I'm a stenographer, foodie, avid traveller, and new mom who loves to share her experiences with the world.
View all posts by stenoodie →
This entry was posted in Food and tagged Japan, Okinawa, pairs, postaday, Shisa figurines in pairs, souvenirs, tourist, weekly photo challenge. Bookmark the permalink.