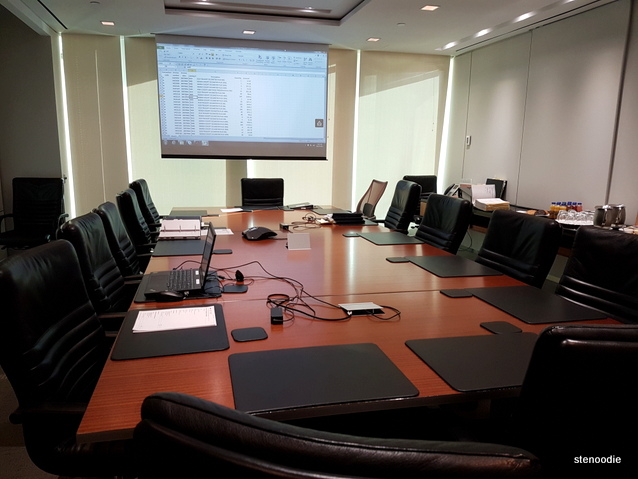 I’ve passed by this building many, many times but this was the first time I got to report in one of the firms on the upper floors!

It was really posh inside and the conference room itself even had an entire coffee and tea station, hot water, cute little squares of sliced lemon, juice, soda, and cookies too!  So impressive!

Since I was there early, I actually wasn’t sure where to sit.  I usually sit at the head of the table so I can hear and be in the middle of all the action but for this case, there was a projector screen right at the front and it would be awkward to sit there and have everyone stare over my head. 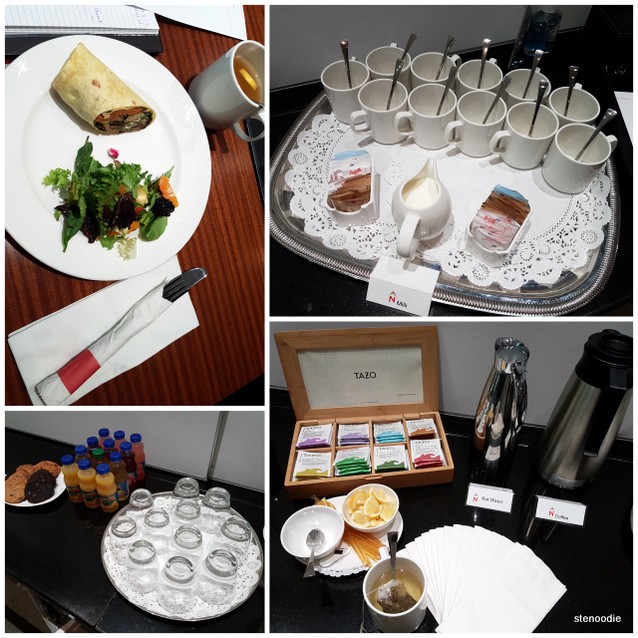 Thus, I set up at the other end of the table but was ready to move if that wasn’t the best spot.  Since I was covering day 2 of a two-day discovery, when one of the parties came in, he did mention that the reporter sat on the other side of the table so I moved there instead. XD

I was glad that everyone was so nice and friendly.  Even the witness was very zealous about proper spellings when he saw me note them down that he was peering over my notebook sometimes. XD

It was a full day.  If the table wasn’t so large, it actually would have made more sense for me to sit at the opposite end of the table to face the projector because they occasionally referred to documents on the screen.  Thus, I actually had to swivel in my seat to get a good look at the documents.  However, if I sat at the other end, I would have been too far away from them too.  Choices..

This was the first firm I’ve been to that had lunch served as well!  The witness was super kind as to inform me about it.  The board rooms and hallway were so chic.  The view of downtown from their windows was spectacular as well.

The ladies washroom was a bit of a maze inside too XD.

A tiny minor annoyance was I wish the kitchen lady didn’t come in in the middle of our discovery to clean up the refreshment station.  She made so much clinking and clattering noises.. not good for the record when I go over it later. 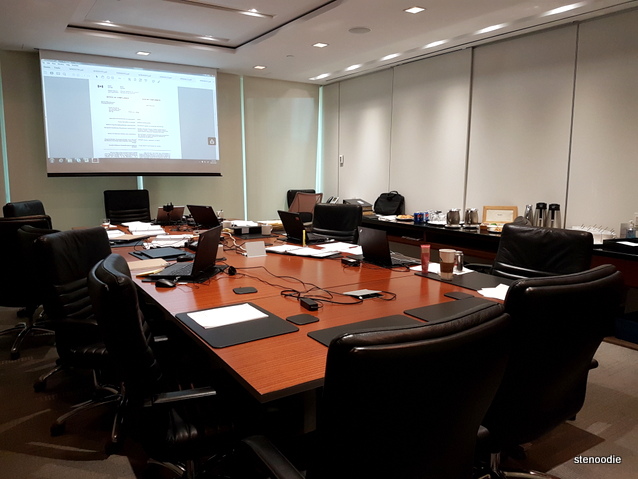 Took this photo at lunchtime

Oh, and this was also my first pharmaceutical case!!  Good thing it wasn’t too too technical :D.

I'm a stenographer, foodie, avid traveller, and new mom who loves to share her experiences with the world.
View all posts by stenoodie →
This entry was posted in Steno and tagged steno, steno adventures, stenographer. Bookmark the permalink.

2 Responses to First pharma case in a nice office