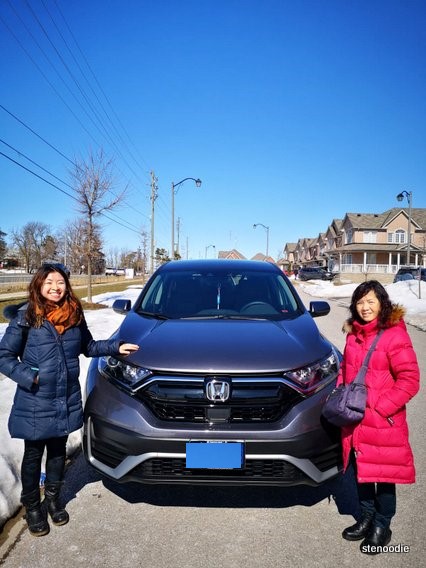 Us with the new car!

Sometime last month before everything non-essential shut down, we were able to test drive some vehicles in preparation of our car lease expiring.  You can read about when we got our Honda Civic back in 2016 here.

We had been phoned by an agent even as far back as December 2019 reminding us of our lease expiring in March 2020 but with everything being so busy in the last month of the year, we kept delaying it until it was literally the last two weeks or so and we had to go in to make a decision.

I enjoyed the Honda Civic during the four years we had it, but I was also interested in the mini SUVs considering they’re bigger, have a better view of the road from a higher angle, and just was interested in upgrading. I also enjoyed how the Honda car was very reliable in nature and we had no maintenance or sudden repair issues at all.  Its steel frame also held up to a minor collision that we had as well.

We did head to a Hyundai car dealership first to test out their SUV, but I wasn’t impressed.  First, the agent dealing with us was incredibly passive and didn’t actually persuade me on the benefits of the car or provide any financial incentives. When we test drove the car, he didn’t even ask us for any identification or driver’s licence. As far as I know, that could be incredibly dangerous for him and reckless in general, etc., etc.

Secondly, the SUV that we drove wasn’t entirely impressive either. It appeared bulky in size and when I put my foot on the gas, I felt like the car wouldn’t “go” smoothly. I just wasn’t impressed and was entirely astonished at the agent’s overall passive way of selling..

We ended up returning to our home base of Honda and the salesman there immediately was an observant and experienced one.  He let us try two different SUVs (can’t remember the names right now), and I immediately took a liking to the CV-R. It was so smooth to drive! I really liked the height of the car as well.

The same features from the 2016 Civic were available here like the much-loved brake stop and eco driving mode.  And apparently lots of consumers wrote in to say they preferred a dial button for the volume as opposed to the touchscreen only panel so Honda added that for the 2020 cars. Heated seats and rearview mirrors were included but still no heated steering wheel.

We weren’t planning to made a decision that day at all as I wanted to sleep on it first. However, the salesman was brilliant and didn’t take our word for it at all. He called the manager over and gave us such a good deal that we couldn’t walk away from. It was also the store closing hour and they put in all the perks for us. Winter tires, intake of the old lease vehicle despite scratches and all, etc. They got us line, hook, and sinker, but not in a bad way because then our car search was once again done and figured out for the next couple of years. 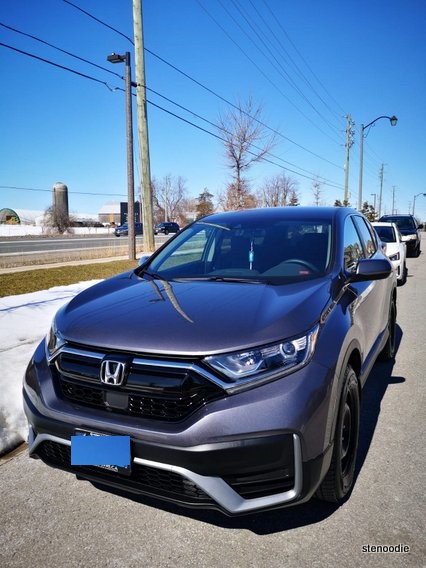 When we picked up the car the day it was ready, it unfortunately was set with the new blue Ontario licence plates.  Had the vehicle been picked up only a week later, the old stock of white Ontario plates would still have been used. And even though it’s been said the plates will be sent anew to the drivers who received the faulty blue plates, with the current pandemic going on, who knows when this small tidbit will be corrected and the new plates sent our way?

The new car is so easy to drive. Also, forgot to mention that it is also keyless! It’s nice not to have to stick the key in the ignition or to use it to open the vehicle doors. As long as you have the fob near the car, you can unlock or lock the car without taking it out of your purse/pockets. So neat.

There’s that new car smell which actually makes me a bit sick this time, so I have to make sure I have the windows down when I’m in it.

Looking forward to driving this car again regularly around town when we are let loose from the lockdown. I miss driving to and from errands on my own and enjoying the radio music rides.

I'm a stenographer, foodie, avid traveller, and new mom who loves to share her experiences with the world.
View all posts by stenoodie →
This entry was posted in Life and tagged @hondacanada twitter, Honda Canada cars, Honda CR-V 2020 in steel grey, Honda mini SUVs. Bookmark the permalink.