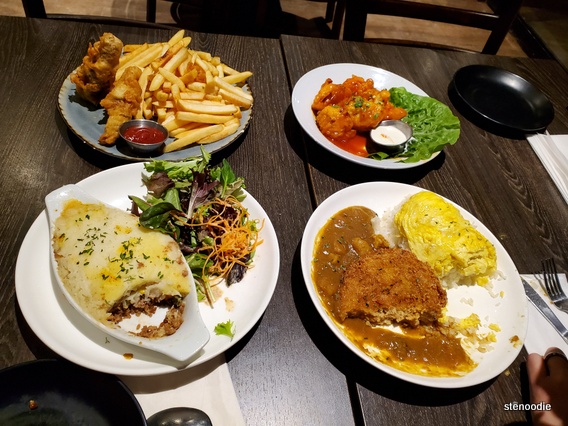 January 19, 2020:  We decided to check out this brand new vegetarian/vegan restaurant in Markham called Bo Tree Plant-Based Cuisine (4568 Hwy 7, Unit 3).  It’s located in the plaza on Highway 7 and Kennedy and is rebranded from the Black Bear Japanese Fusion restaurant.  At the time of visiting, they had a 20% off on all orders until January 31, 2020.

The restaurant opened at 5:30 p.m. for the dinner service.  We actually arrived about 10 minutes ahead of their opening since we were early.  We parked our vehicle and waited in the car until it was exactly 5:30 p.m. to step into the restaurant. 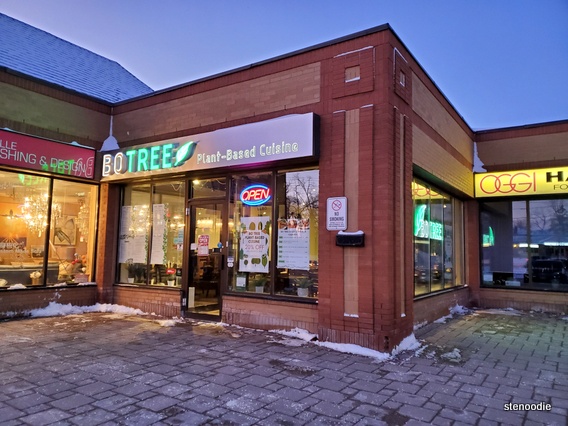 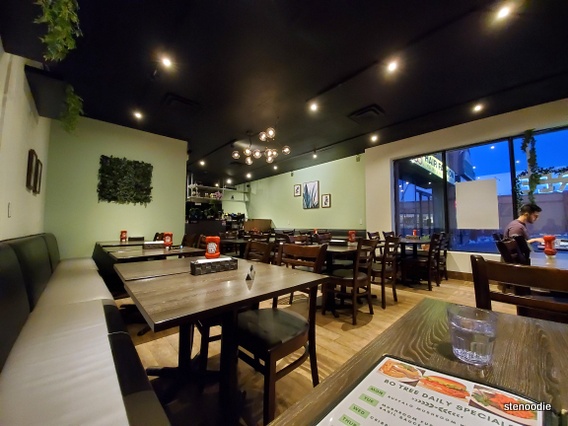 Naturally, we were the very first customers dining in for dinner that evening.  I noticed that they had some “reserved” table signs on some of the tables already.  The restaurant was newly painted over the old caricatures on the wall to reflect the new rebranding.  A couple of minutes after sitting down, another table of customers arrived.

We were served water in small water glasses at our table.  Throughout the night, we wished that a pitcher of water could have been given at each table instead of waiting for the servers to make the rounds on refilling our empty water glasses.

The menu included lots of Asian fusion dishes as well as classic western dishes.  We were actually really impressed with the variety, creativity of dishes, and the prices (usually vegan restaurants upcharge most of their dishes).  The dishes were either vegetarian or vegan (make sure you inquire about the ingredients if you are a strict vegan).  Everything was really reasonably priced and with the 20% discount that was offered that weekend, we couldn’t pass up on ordering more dishes than usual.  There were also so many appetizing dishes we wanted to try! 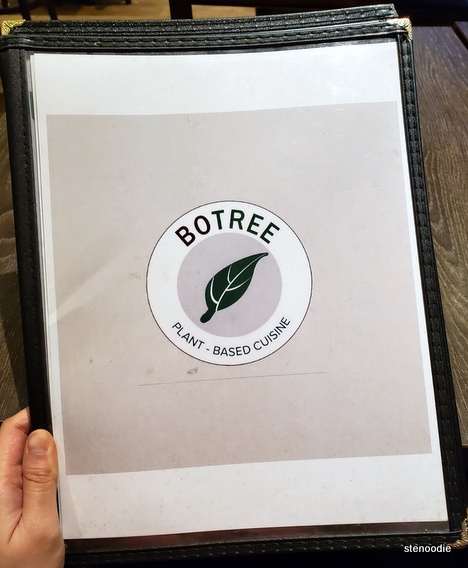 Bo Tree Plant-Based Cuisine also had a daily special menu where there was a specially priced dish every day of the week.  On the weekends, the special dish was “Fish” n’ Chips.  For only $9.99, we couldn’t pass that up either and added it to our meal. 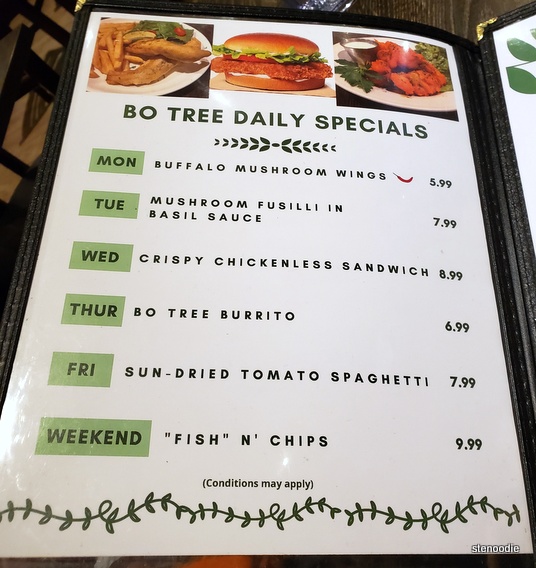 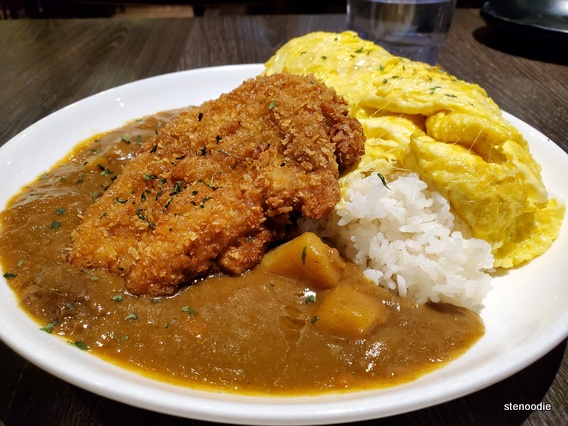 The first dish that arrived was a dish that we were anticipating once we saw it on the menu:  Chickenless Katsu Curry Omurice.  This was executed really well and is one of the best carryover dishes from their previous Japanese fusion restaurant but in vegetarian form.  The savory curry sauce was perfectly thick in consistency, the scrambled eggs were as smooth as can be, and the vegetarian katsu seitan had a nice crunch.  It all went so well together with rice.  Pure comfort food.

The next dish was the Meatless Shepherd’s Pie with mixed greens (or you could choose fries).  The mashed potatoes were good, but I wished there was a little more gravy.  Otherwise, the Shepherd’s Pie did taste like the real meat dish except that it was made with textured vegetable protein.  The mixed greens salad with the sesame dressing was fresh and tasty. 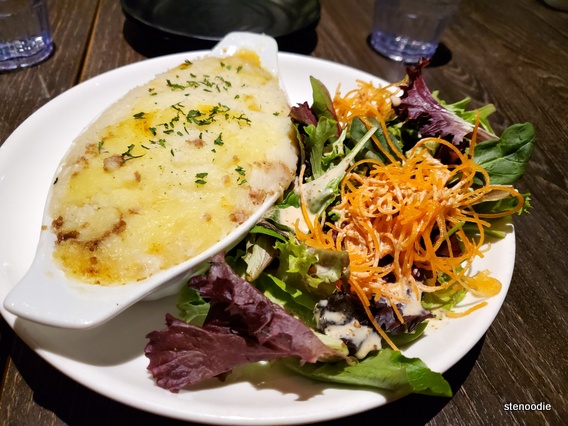 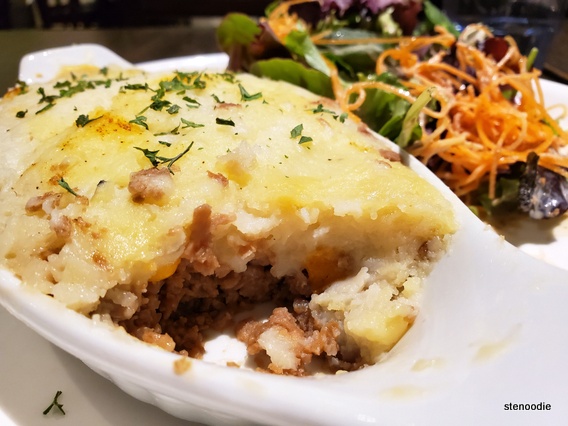 Close-up of the Shepherd’s Pie 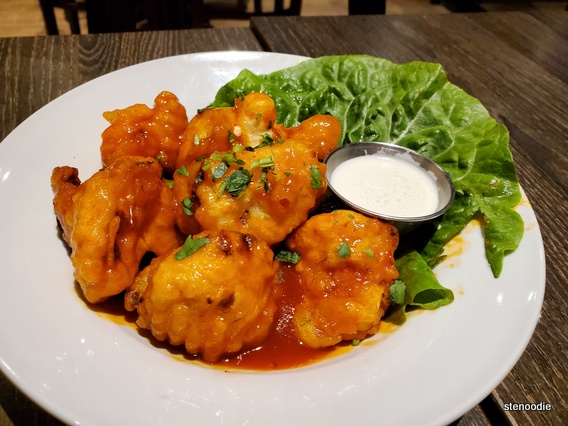 The Buffalo Cauliflower Wings were a vegetarian take on buffalo wings.  Each large cauliflower floret was deep fried and covered with buffalo sauce.  I liked the white tangy blue cheese dip that came with it too.

One thing I noticed was that when our neighbouring table ordered the same dish, their plate of Buffalo Cauliflower Wings was a lot bigger than the one we received.  I surmised that they literally had two or three pieces of the “wings” than we had on our plate.  The restaurant lost a few points in this instance when their dishes are so inconsistently portioned. 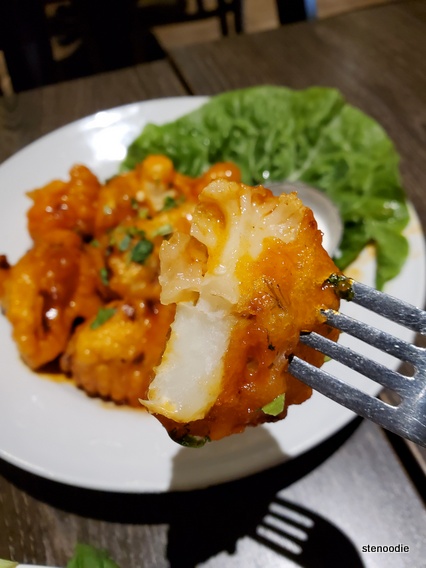 The use of cauliflower as imitation wings was a good idea

Lastly, we had the daily special “Fish” n’ Chips, which consisted of two pieces of fish and fries.  The “fish” was actually a battered and deep fried piece of artichoke that resembled a piece of actual fried fish.  In fact, the texture of the artichoke was flakey just like real fish fillets too.  It was a really well done dish!  The fries were all right. 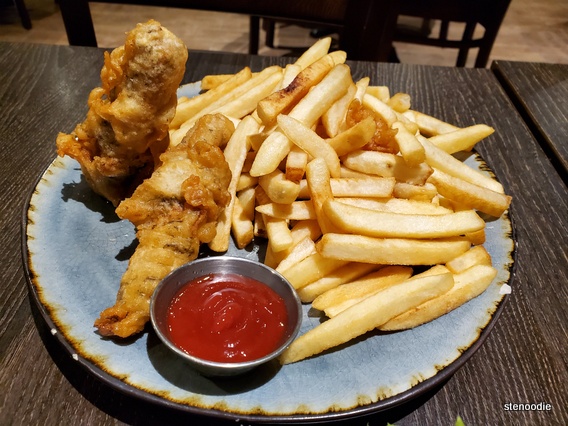 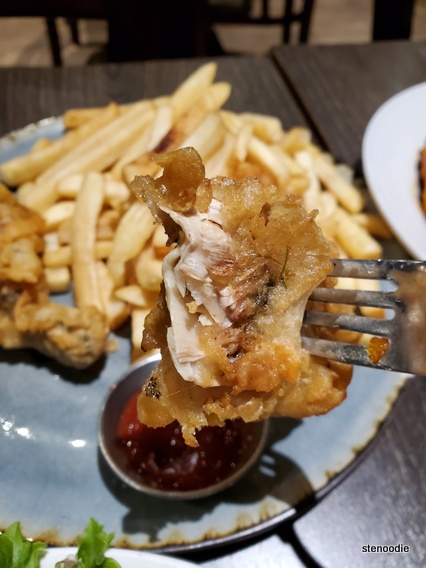 Because we were only a party of two and ordered four dishes, we naturally didn’t finish all of it.  We doggybagged the leftovers home.  I like that the restaurant provided plastic containers instead of Styrofoam.  (We also realized that the dishes we chose that night were coincidentally deep fried — three out of the four items — one of the reasons why we desired for more water consumption as the meal progressed.)

There were more dishes on the menu we wanted, including dessert, but we already ordered more than two people could eat.  Leaving the restaurant that night, we already knew we wanted to return to Bo Tree Plant-Based Cuisine to try further dishes (like their flatbread pizzas, tacos, coconut shrimp, nachos, okonomiyaki burger, meatless spaghetti, and so much more).

It’s really nice to see an affordable vegetarian/vegan restaurant in Markham.  There aren’t enough good restaurants like this in the area.  I really hope they do well!