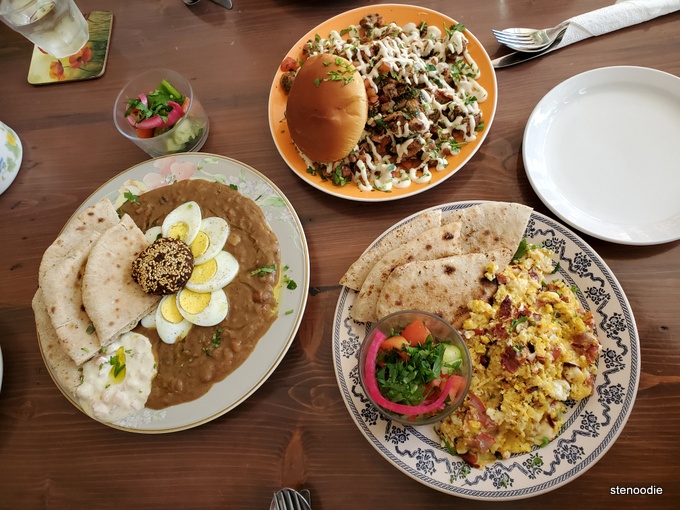 About the time we visited Maha’s Egyptian Brunch restaurant for breakfast in August 2022:

Since bb had been waking up really early (like 6 a.m.) and we wanted to gradually adjust her nap and sleeping schedules (and also I was woken up too), we decided to take advantage of this and drive down to Maha’s Egyptian for their infamous brunch/breakfast.  I had heard all about this restaurant for years but never had the chance to go.  I heard that their lineups for brunch were long and to expect at least an hour’s wait if I were to visit.  (I even wanted to visit during the pandemic and get takeout since I knew then that there would be fewer people.  However, at the same time, I also thought about how the food would be better tasting to eat fresh for dine-in.)  Thus, now that there are no more restrictions, we were finally able to try this restaurant out! 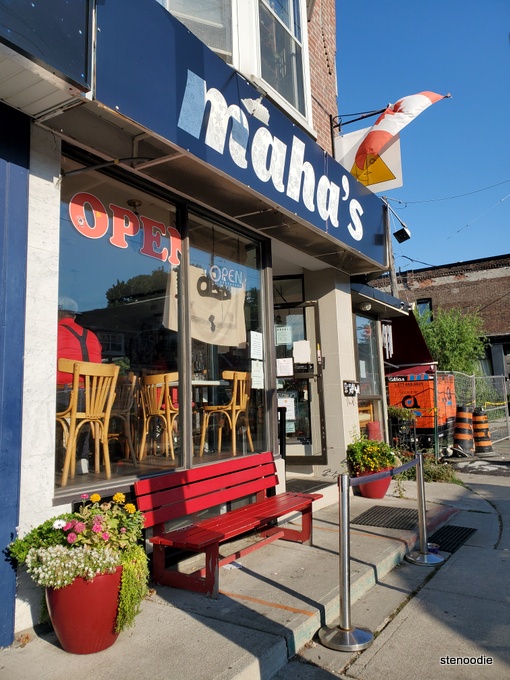 Maha’s is located on 226 Greenwood Avenue in the Leslieville neighbourhood of downtown Toronto.  There are no nearby parking garages or structures and only street parking is available.  The drive down to the restaurant for us was so fast; only about 20 minutes to get there!  Even so, the side streets near the restaurant were already full of parked cars.  We were lucky to find a parking spot in front of some cars on the street and then walked 3 minutes to the restaurant.

Upon arrival, we were given a choice of dining indoors or on the patio.  I chose indoor dining, which of there were two options to choose from:  the long table with the sofa seating or the four-seater table by the window.  I didn’t choose the window seat because the sun was streaming in so brightly through the windows.  The long table did mean that we shared the table mid-meal with another party of three, but it was fine. 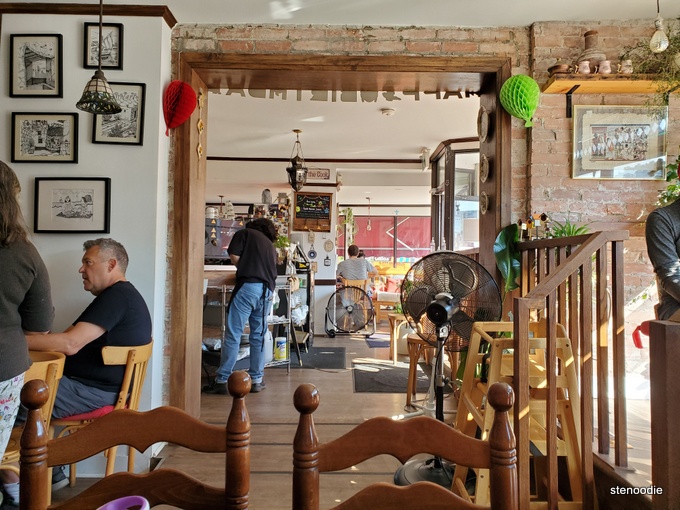 View of the restaurant from where I was sitting 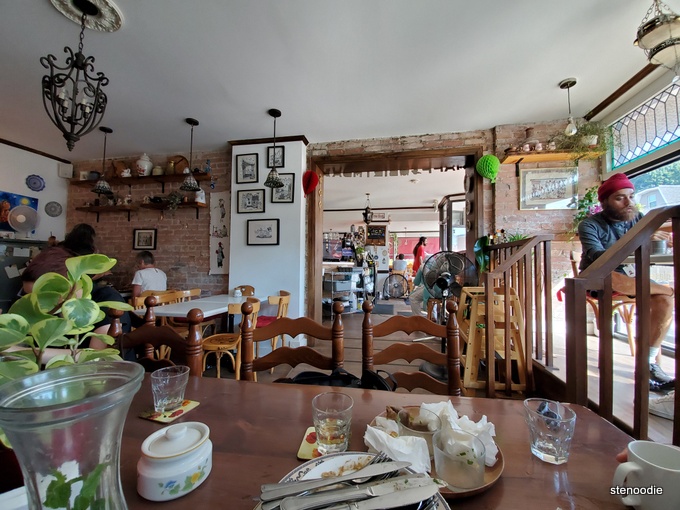 It was very cozy and homey in the dining room with lots of Egyptian decor and artwork on the walls and shelves.  It felt like dining in somebody’s house.  At 8:30 a.m., there were already so many patrons dining in for breakfast and the place was packed.  I was so glad that we arrived in time to snag the second-last table.

On the table, the food and drink menus were laid out.  There was a large pitcher of water infused with lemon and herbs.  Despite the infusion, we surprisingly didn’t taste any of the lemon or herbs in the plain-tasting water. 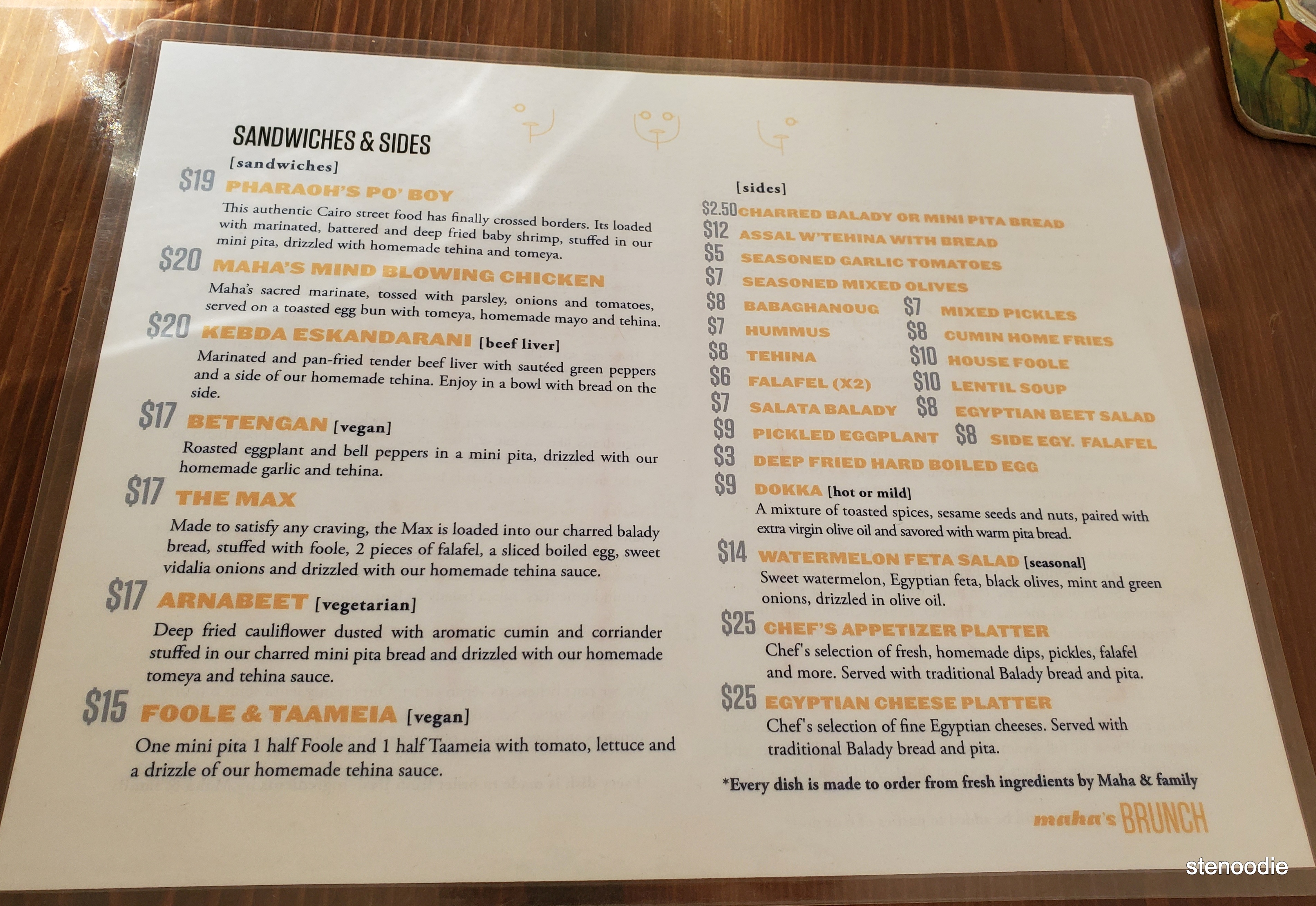 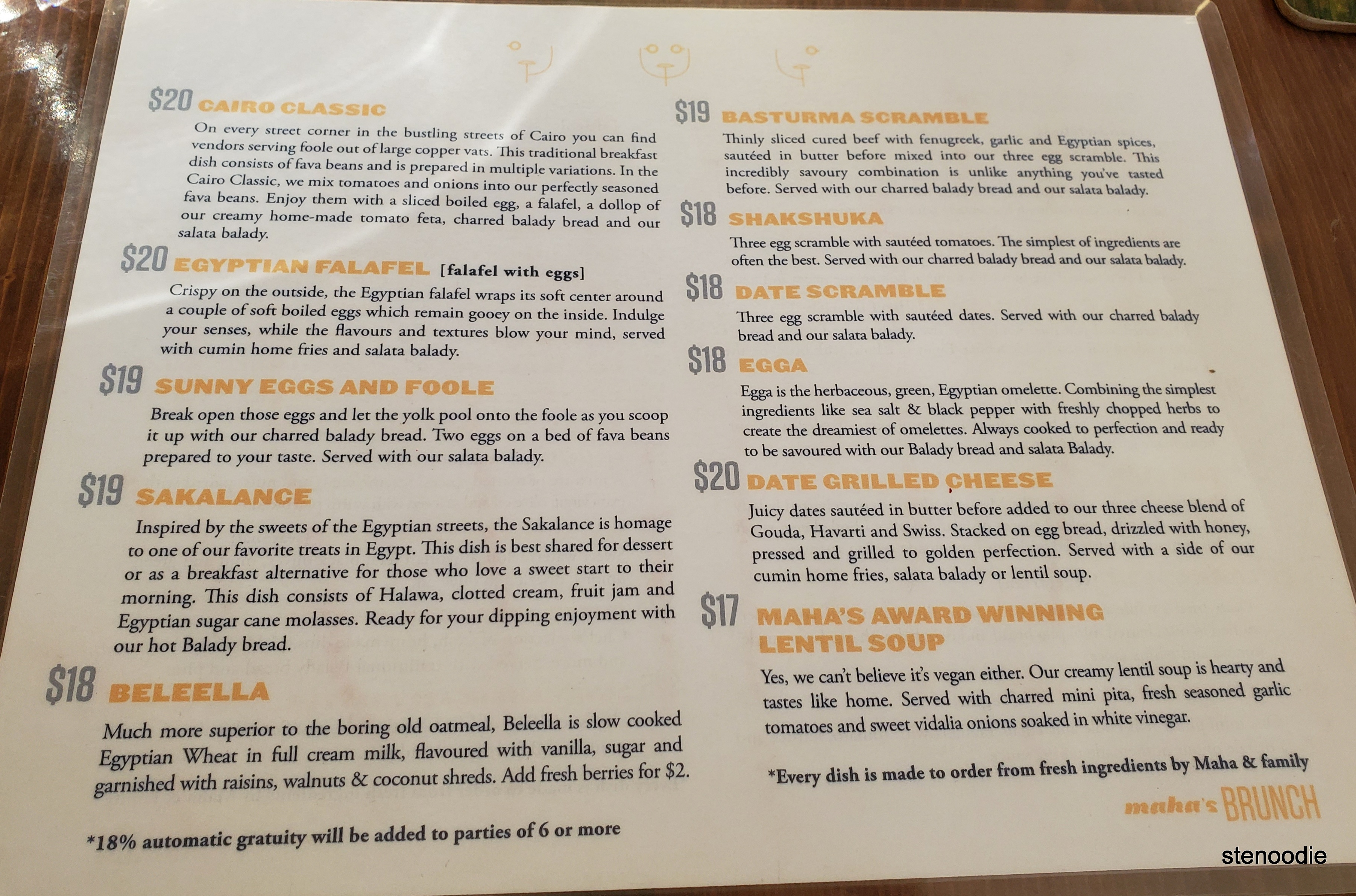 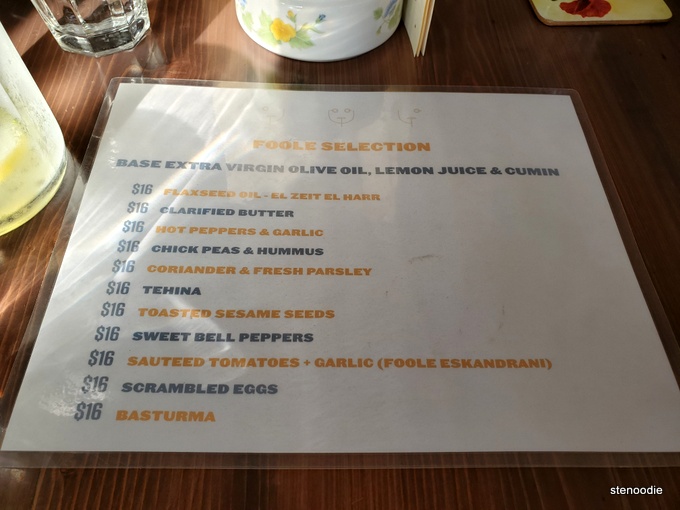 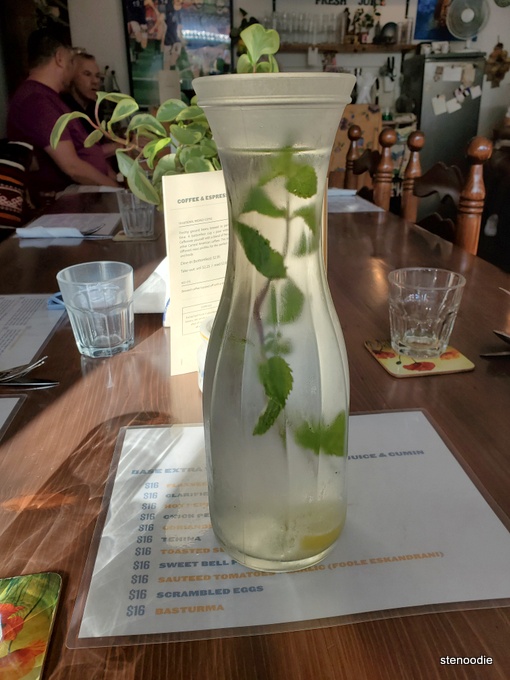 Water infused with herbs and lemon 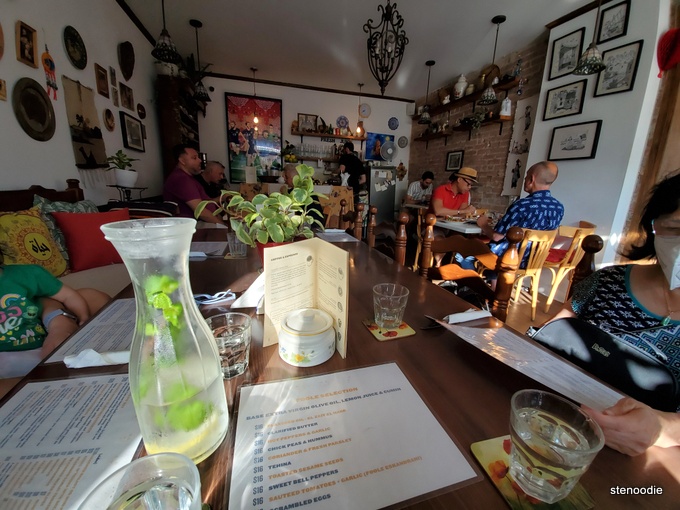 You can see part of the sofa seating for our table

I already knew that I wanted to try the Maha’s Mind-Blowing Chicken dish.  It’s the dish that everyone posts about when they visit this restaurant.  We also ordered the Basturma Scramble and Cairo Coffee.  For $2.95, hubby got the bottomless coffee too.  (If I remember correctly, it was only a few cents more to get the bottomless option and thus a better deal.)

The sofa seating was very comfy and unique.  The toddler enjoyed sitting there and people watching too.  The staff were nice and came around often to see how we were doing.  It is a family-owned restaurant.

The restaurant didn’t have any air conditioning turned on at the time of our visit on August 20th.  They relied on a few fans to keep the place cool.  However, it was still really hot and stuffy.  I found myself sweating while sitting there with my back against the sun.  (In contrast, their individual restrooms did have air conditioning and it was SO refreshing and nice in there.)

Our three dishes all arrived together: 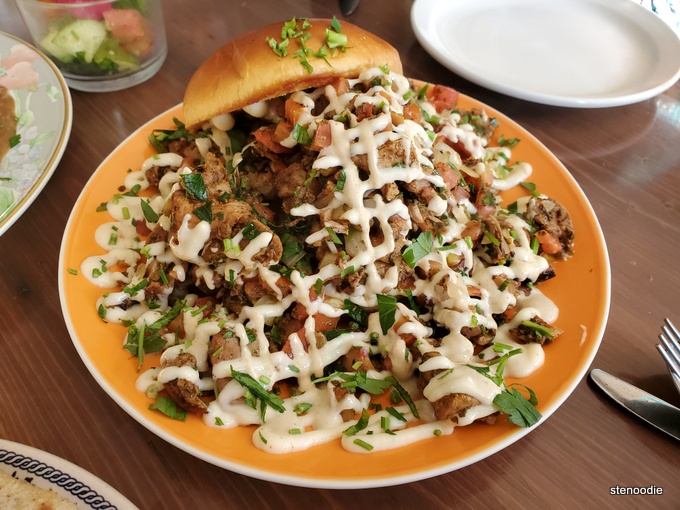 The Maha’s Mind Blowing Chicken ($20) is actually a chicken sandwich.  It has Maha’s “sacred marinate” tossed with parsley, onions and tomatoes and served on a toasted egg bun and tomeya, homemade mayo, and tehina.

I was so excited to dig into this long-awaited and much-talked-about dish, so I was really shocked when I found the first bite to be so salty.  I had a forkful of the marinated chicken with the sauce and I couldn’t believe how savory and salty it was.  I love savory items but even this for me was way too salty!  The chicken was moist though.  It actually reminded me of eating chicken shawarma.

Despite it being a sandwich, it’s actually very physically difficult to pick it up with your hands to eat.  There is so much chicken sprawling out from the sandwich (part of the appeal) that it’s hard to find the beginning and end.  It’s more of a fork and knife dish.  As such, when you do get to the toasted bun part, the bread is all soggy from the chicken and sauce.  I found it difficult to finish since it was so savory and there was nothing to offset the strong flavour with. 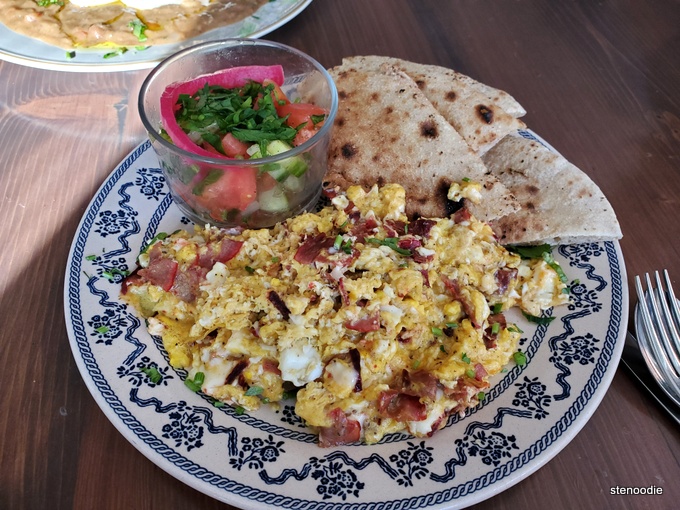 The Basturma Scramble ($19) had thinly sliced sliced cured beef with fenugreek, garlic, and Egyptian spices, sautéed in butter before being mixed into their three-egg scramble.  It was served with charred balady bread and salata balady.

Unfortunately, I also found this egg scramble to be very salty.  The scramble itself went well with the bland pita bread and relied on it to stay neutral in taste.  Why was everything so salty?!  The salata balady was the small tarty salad which helped to balance the flavours out. 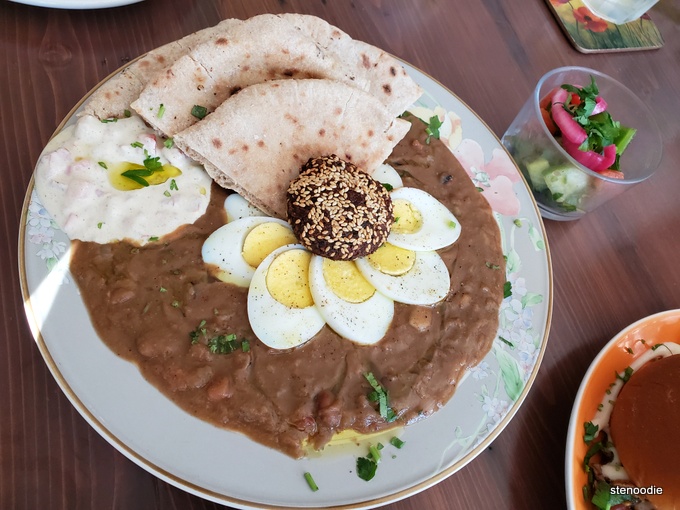 The Cairo Classic ($20) was a traditional breakfast dish.  Their version consisted of seasoned fava beans mixed with with tomatoes and onions.  There were also sliced boiled eggs, one falafel, and a dollop of creamy homemade tomato feta.  Charred balady bread (pita bread) and salata balady were served on the side.

This was a unique dish.  You also use the accompanying balady bread to scoop up the fava bean mixture.  I liked the falafel but too bad there was only one of it in the dish. 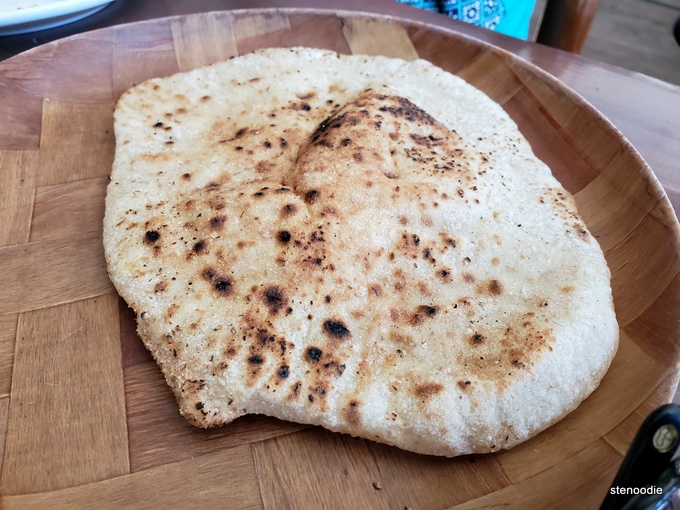 As we were continuing to eat, the owner came by to ask how our food was.  I didn’t tell her that I thought the food was very salty.  Looking at the remainders on our table, she asked if we needed more bread.  I answered “No, it’s okay” and she for some reason misheard me and said she was going to bring more over for us.  Um, okay then.  Thus, we got more of the balady bread on our table.  It was fresh and warm.  What we didn’t know until we received the bill was that this was an extra charge.  And it wasn’t a small charge either.  The extra balady bread cost a whooping $2.50!  Hubby’s bottomless coffee was $2.95 already so we thought that this unwanted extra bread was exorbitant in costs.  It was ridiculous.

Needless to say, my first experience at Maha’s wasn’t entirely the best.  I was really thankful and excited that I finally got to try this very popular brunch restaurant and didn’t have to line up for it at all.  However, the tastes were so salty and the prices weren’t cheap either.  Nevermind the extra costs, but each main dish costing $20 is quite expensive.  Our total for three adults and one toddler was $73 for just breakfast after taxes, which is insane.  I honestly can’t see myself returning to try their other dishes unless I was dining with more than four other friends with items all to share (to balance out the costs).

Have you visited Maha’s Egyptian Brunch?  If so, what was your experience like?