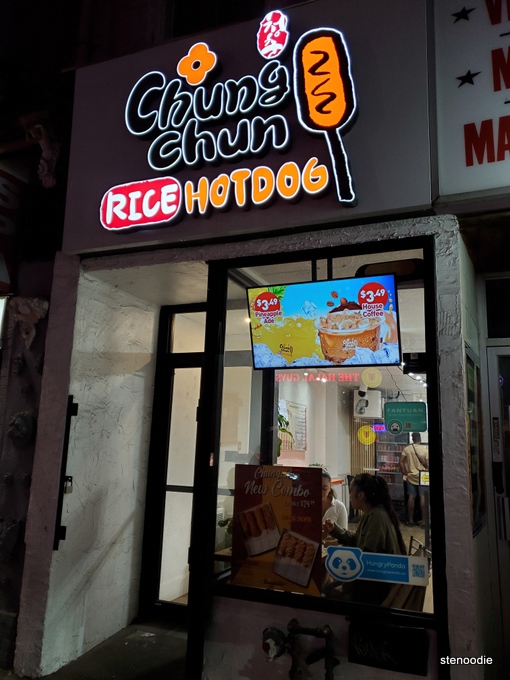 Last month, as part of our third-year wedding anniversary adventures downtown, we stopped by Chungchun Rice Hotdog on 582 Yonge Street near Wellesley to try these popular Korean corn dogs.  According to the Internet, Korean corn dogs (also known as a “gamja hot dog”) is a street food that’s common in the night markets in Seoul.  American corn dogs use cornmeal batter, while Korean corn dogs use rice flour — hence the name.  It’s made its way into the Toronto food scene a while ago, but it was only recently that we got to try these.  There are a lot of locations of Chungchun Rice Hotdog across the GTA already (and even across Canada!).

We visited this small shop at about 7:30 p.m. on a weeknight and were surprised at how busy it was.  There were people waiting for their orders when we arrived and more people coming and going even as we received our Korean corn dog order. 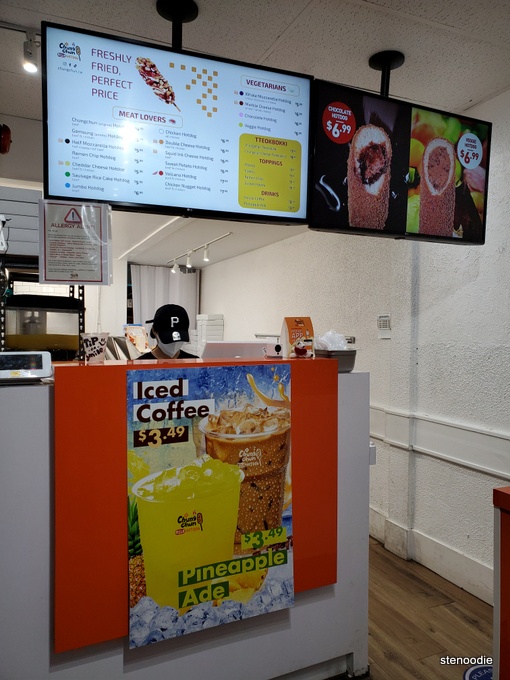 There are so many types of Korean corn dogs you could order: beef, chicken, pork, or vegetarian and with a multitude of different fillings or combination of fillings.  You finish off the corn dog with various sauces and seasonings too of your choice!

There were some signs with beautiful photographs showing different combinations of the sauces and seasonings, with them advertising that sugar with the hot dog was one of the best ways to enjoy the corn dog.  I was a bit apprehensive that simple sugar could make a hot dog taste good, but they must be recommending that for a reason. 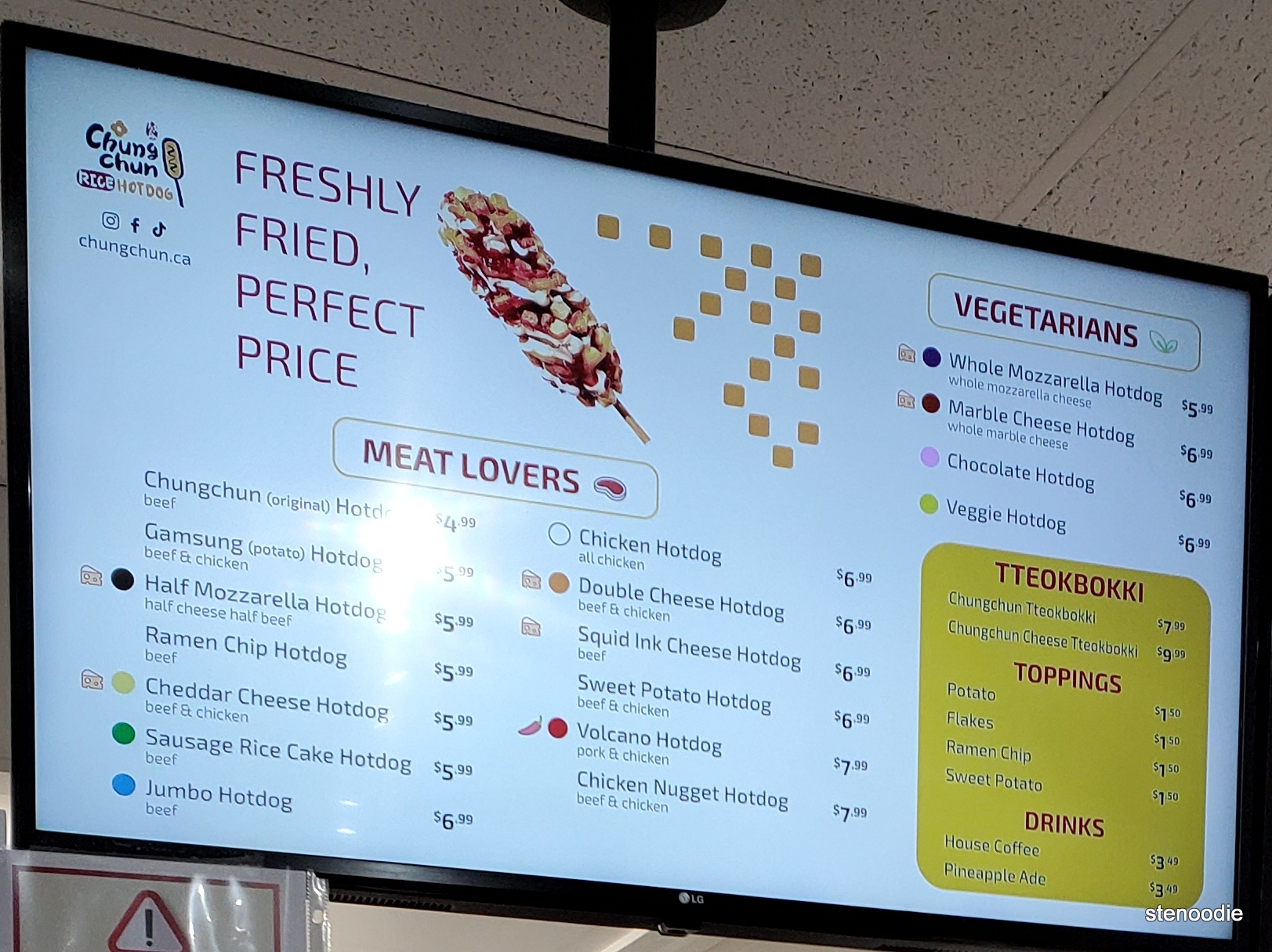 I was a little overwhelmed with the selection process and also because it was my first time ordering such corn dogs.  DH and I decided upon the Half Mozzarella Hotdog which consisted of a hot dog with half cheese with half beef.  It was $5.99 for the snack and the wait for it was about five minutes.

There is only one small table inside the shop as most people order the corn dogs to go.  (I even saw a food delivery person pick up orders — must be some great night-late food!) 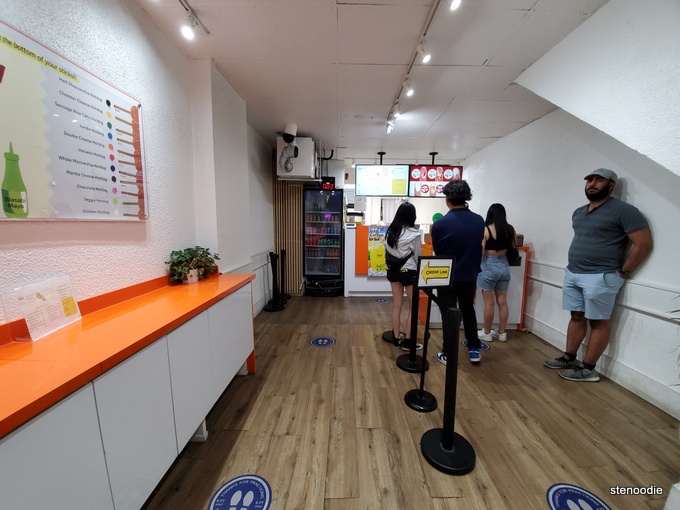 People lining up for the Korean corn dogs 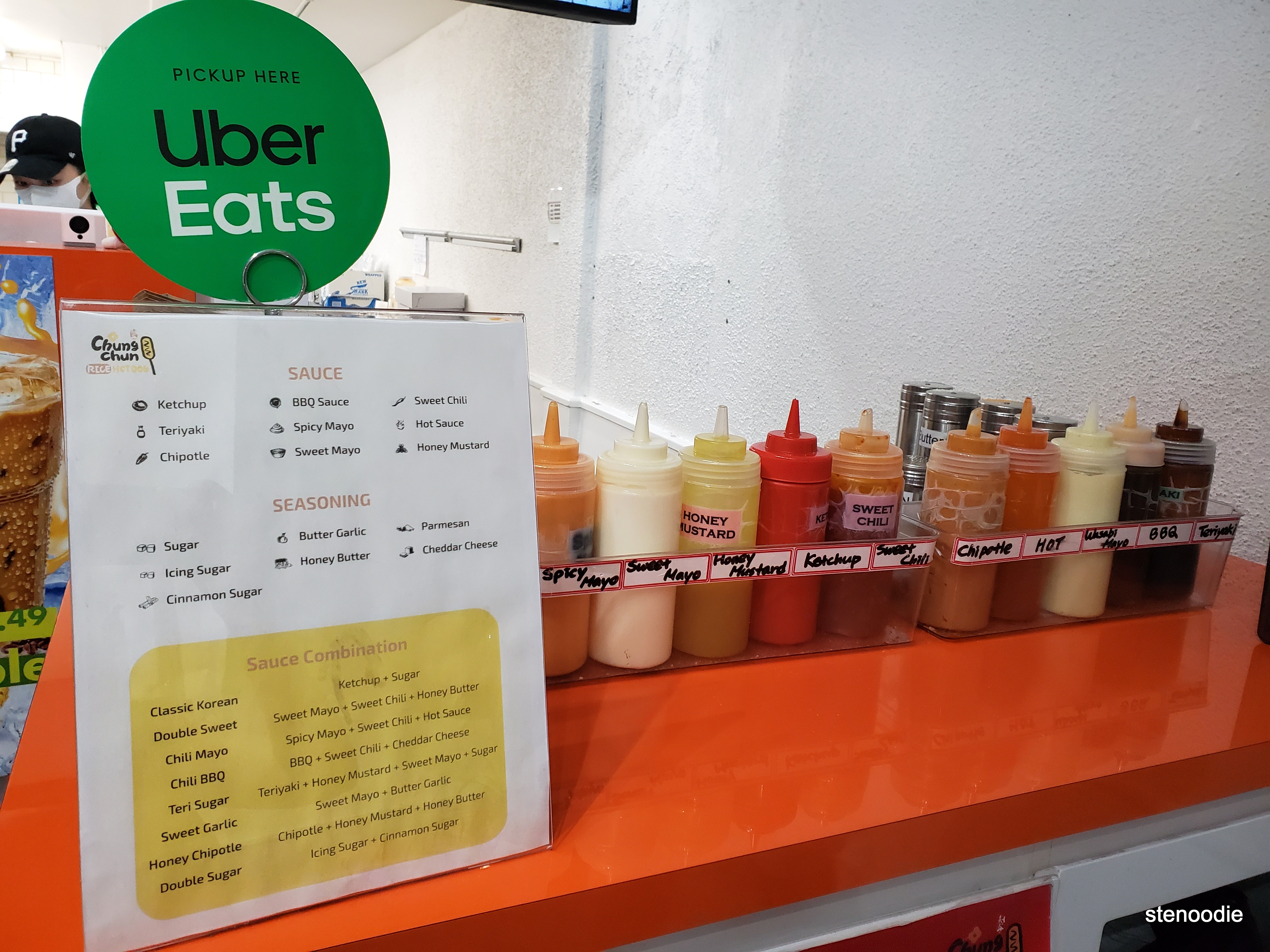 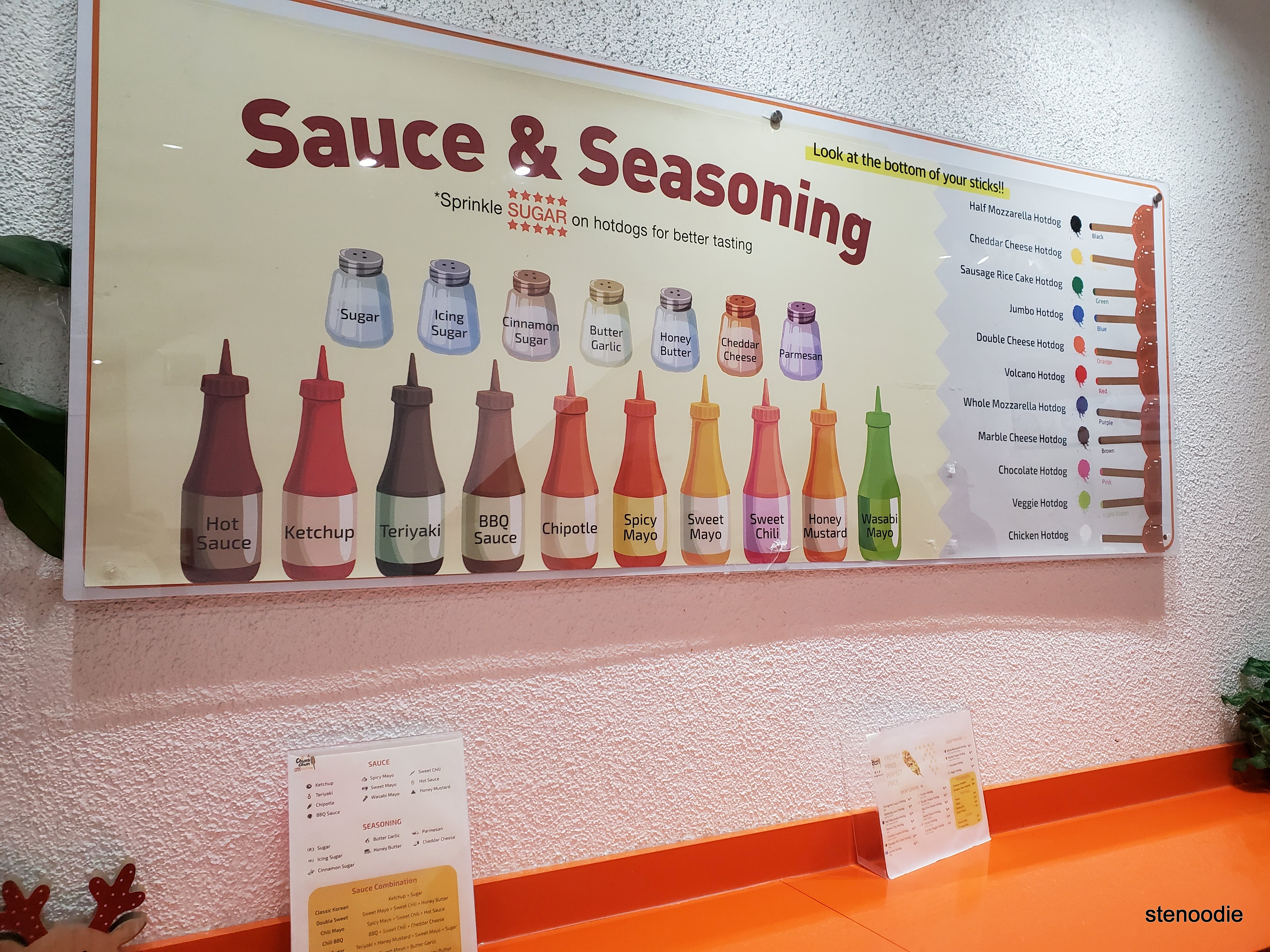 When our order was ready, we told the staff member which sauces and seasonings we wanted.  (The staff member does it for you.  I was wondering why this wasn’t a self-serve station, but I can understand how they would do it quicker and with more experience than if some youngins were just fooling around with the sauce and seasoning containers.)   I was able to request for a half and half of the preferred sauce and seasoning too.  If I remember correctly, I asked for half of the “Sweet Garlic” (sweet mayo and butter garlic) sauce combination while DH tried the “Chili BBQ” (BBQ and sweet chili and cheddar cheese) sauce combination. 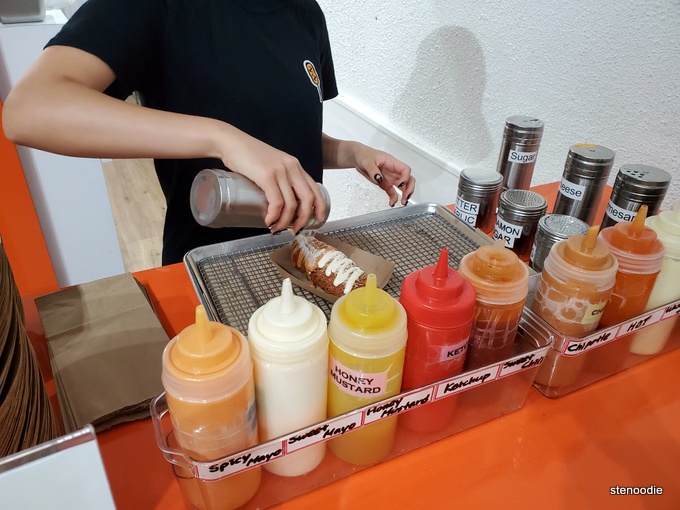 Saucing up and seasoning our hog dog 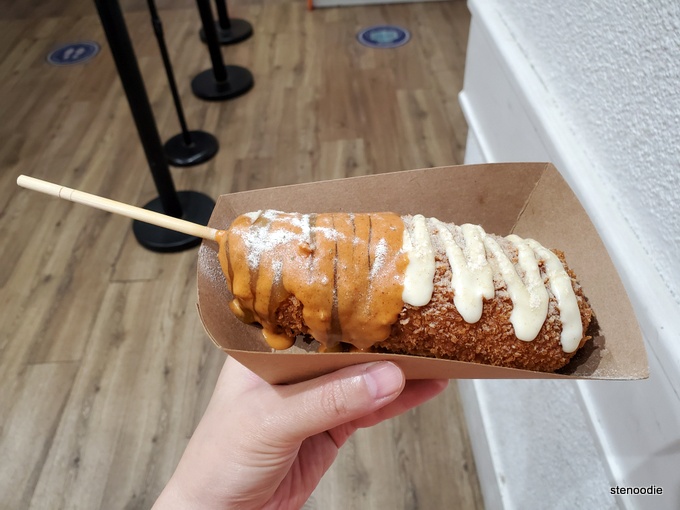 Half Mozzarella Hotdog (with 2 types of different sauce combinations). $5.99

We stood outside in front of the shop and enjoyed this snack.  Unfortunately, I think we ordered the wrong corn dog.  (Not that the shop made the wrong order but that we picked the wrong kind to try!)  The Half Mozzarella Hotdog ended up to be literally half of just mozzarella and then half of just beef hotdog.  So when we were eating it, the first half was mighty plain.  It was cheesy, but that was it.  It wasn’t until we got to the second part of it that we had a bite-sized hot dog to enjoy.  The sauces and seasonings were good though.  The corn dog really relied on the sauce and seasoning to make it taste good.  No wonder there was so much information about the sauce combinations; they wanted you to make sure you had a good-tasting corn dog. 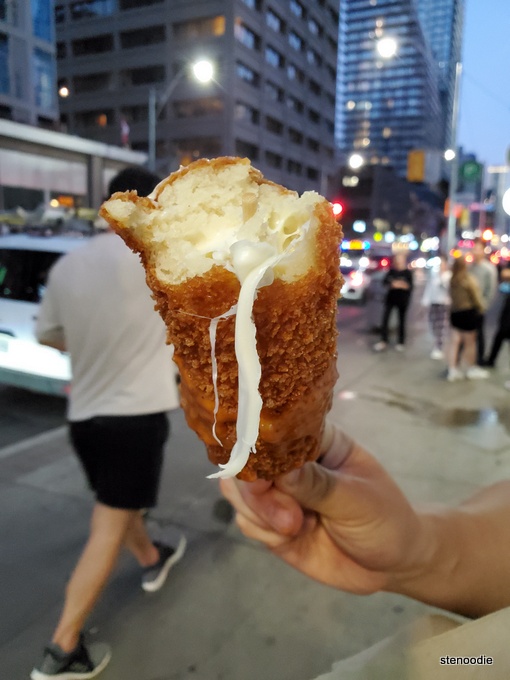 The first half of it was just plain mozzarella 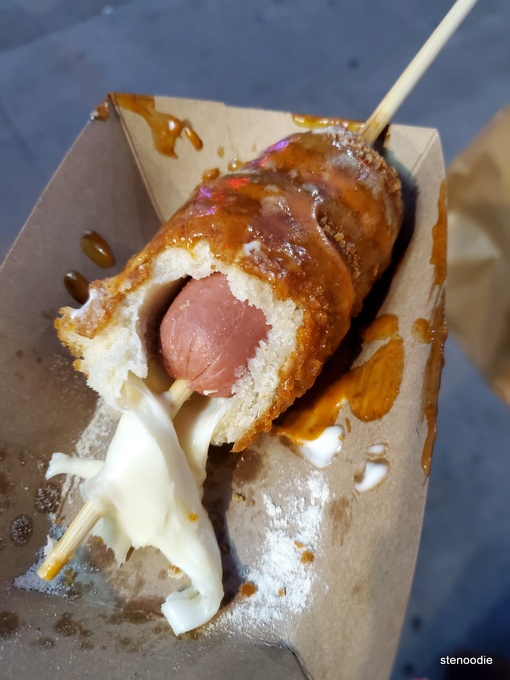 The second half where was the beef hot dog was

We didn’t have the stomach space for more food (since we had just come from a full meal), but if we did, I would have loved to try another flavour (and this cheesy hot dog was quite filling).  They have interesting ones like the Ramen Chip Hotdog or Squid Ink Cheese Hotdog or even the Chicken Nugget Hotdog.  I’m really glad that we finally got to try this popular street food snack!