A Look-back at Teaching Phoenix Theory at CCVS

It was a Thursday afternoon in late August 2012 when I received an e-mail from CCVS asking me if I was interested in teaching Phoenix Theory at the school. My first reaction after reading the e-mail was, “No way, I’m not going to be a theory instructor; I want to be a court reporter!” However, after thinking about it for a few minutes, I was curious about the job and wanted to find out more. So the next day, I went to speak with Nancy, Kim, and Jennifer, and when I walked out of the school that Friday, I was hired to start on Monday at CCVS as the new Phoenix Theory instructor. Little did I know that this would turn out to be one of the best decisions I ever made. The following is a reflection on my experiences of teaching theory full-time at CCVS.

I started off teaching the hybrid students and some of the online students in September 2012. I wasn’t aware how much work grading dictations on the LMS and utilizing the Theory Evaluator website entailed (they didn’t have these when I was a theory student). There was a lot to learn, and the first month of teaching was a little hectic. However, the best part of it was when I got to interact with the students. It was really neat to be on the other side and to show the brand new September students how to position their fingers on the steno keyboard, how to open up a new file, and answer any questions they had. I didn’t realize I knew so much about the LMS and Case CAT because these had become second nature to me as a student. 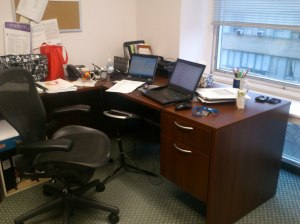 My work space in the office. It was so nice to have a window to look out of. At one point of teaching, there was so much work to do that when I arrived in the morning at 7, it was all dark outside, and by the time I left the office at 9, it was dark again outside. Oh, daylight savings joy.
One time, I was looking out the window and happened to see a guy with a red backpack climb up a lamppost. He struggled for a bit before falling back down to the ground. Talk about random!

One of the things I had to learn was how to dictate material to the students starting at 20 words per minute using a metronome. There were a few times when I had a case of the giggles and would burst out laughing in the middle of the dictations. My students probably thought I was crazy, but as time went on, I was able to form a bond with them and they found out that I was only just a little crazy – for steno, that is. The other side of teaching was the marking. At first, the process of marking progress reports and checking TEV logs was tedious, as there were many files to open and save, but eventually, they became second nature as well. The dictations became somewhat of an obsession for me to grade as I found them tremendously easy and fun to do — just open them up and match the steno in their Vertical Notes with the Answer Key. At one point, because I enjoyed grading the dictations so much and graded them immediately upon receiving them, one of my students jokingly complained that I was grading them too quickly. When January rolled around, I was teaching full-time by then, and was up to my neck in marking. This was the busiest I had ever been; I had 42 students in total from all three programs. I had an average of 20 dictations to grade from both PT2.1s and PT2.2s every day. It was difficult, but I managed to stay on top by grading as much as I could while I was in the office and later at home. Despite this, I really enjoyed seeing my students’ work and watching them progress each week. I liked to challenge them by bumping up the speed gradually on the metronome to see how fast they would be able to write them on their machines, and then later on, for the PT 2.2 students, challenging them with newspaper articles to see how much they could write. They enjoyed the challenge (not so much when it came to drilling numbers, though!). Sometimes, we spent the class discussing anything related to steno. There was a lot for them to learn about this field and I found that I was able to share my experiences with them with great delight.

A definite bonus of teaching the Phoenix Theory classes was getting a taste of the new edition of the textbooks. The lessons in this second edition of the books are more condensed, and they begin teaching briefs almost immediately (unlike in the first edition where most of the briefs are not taught until Speed Plus). As well, because the book teaches how to stroke one-stroke contractions, I took advantage of this chance to learn them for myself too; I had heard about them and always wanted to incorporate them into my writing. The book also had a plethora of briefs that were new to me. Two briefs that I soaked up immediately were /PAOEPL for “people” and /KWRA*EUR for “area”. As well, because the new books have eliminated the use of the distinction /R-R stroke, I also learned how to stroke many homonyms in one stroke, such as /ROL and /ROEL. There were many clever briefs and I applied them immediately to my own writing.

One-stroke contractions that are in the PT 2 book. Super useful! I put these to use right away along with the briefs that they had. I absorbed the following briefs almost instantaneously upon seeing them, much like how SpongeBob soaks up water. 😀 people = /PAOEPL, women = /WEUPL, area /KWRA*EUR, newspaper = /TPHAOUP, and more! These briefs are so intuitive; I’m not sure why they were never thought of in the first edition of the theory.

The best thing about teaching the PT classes was that I had the rare opportunity to network and get to know Canada’s newest generation of stenographers-to-be. I had enrolled in CCVS in May 2009 and because of the university courses I was also taking at the time, I had to take hiatuses in order to manage all of my course work. Because of this, my two-year program at CCVS was stretched out longer and I was in the unique position of getting to know nearly all the classes that CCVS has ever had (it opened in 2008). In May 2009, I made friends from the first class of CCVS students; from ’09-’12, I met and kept in contact with classmates by attending Games Nights and helping out at the Open Houses; and now in ’12-13, I have the opportunity of teaching the newest steno students. I’m very thankful for this opportunity because I have been able to mentor these students and fellow future colleagues. The steno community is so small that we really need to look out for each other and stay connected.

A screen shot of me as part of the Staff bios on the school website! Never in a million years would I have guessed that I would become an instructor at the school. This year, I’m actually both student and instructor! (since I’m still practicing on my speeds to get to realtime) 🙂

Finally, I want to finish off by saying that it has been wonderful seeing off the PT 2.2 students into Speedbuilding. I have seen a couple of my students that started in September literally FLY through their speed tests. In a little less than four months, a couple of them are already testing in the 80-100 wpm speeds. That is amazing! The rest of them are also passing tests at a steady rate and every time I receive an e-mail in my inbox from Don or Kelly about a passed test, I feel so, so proud and happy for them. This is truly an amazing career to be in and I can’t wait to see my students become the next captioner on CBC or steno the next high-profile case. Seeing how much potential my students have, I wouldn’t be surprised if some of them surpassed me before I reach my goal of 225 wpm. The entire teaching experience at CCVS has been so rewarding and I am so glad that I said yes. I not only reinforced my own knowledge of PT, but I also picked up new briefs to write faster, and most importantly, bonded with some fantastic individuals (both the students and the staff). I almost wish I was still teaching at CCVS full-time; however, I do need to keep in mind my own goals of becoming a realtime stenographer, and the only way to do that is to set aside quality time to practise. Since finishing my role as the in-class instructor at CCVS, I’ve been back to practising on Speed Plus and Blackboard dictations with a little bit of progress (I was just two errors short of passing my most recent speed test). I will always look back at teaching at CCVS with great fondness. Good luck, fellow students and classmates! Now we’re all in the same 225 wpm boat. As for the January cohort of PT 2.2 students, you can bet that I’m just as excited to help you finish theory and head off into Speedbuilding!

The gorgeous flowers that one of my students gave me on my last day of teaching full-time at the school. 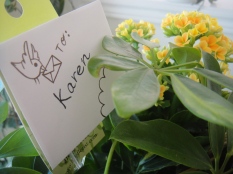 I was so surprised that morning when my student knocked on my door and presented me with these!

The student is one of the best steno writers in the course and had moved on to Speedbuilding since she had fast-tracked through theory. She has so much potential and I have such high hopes for her!

I'm a stenographer, foodie, avid traveller, and new mom who loves to share her experiences with the world.
View all posts by stenoodie →
This entry was posted in Steno and tagged CCVS, court reporting, court reporting students, memories, Phoenix Theory, steno, teaching, Toronto. Bookmark the permalink.