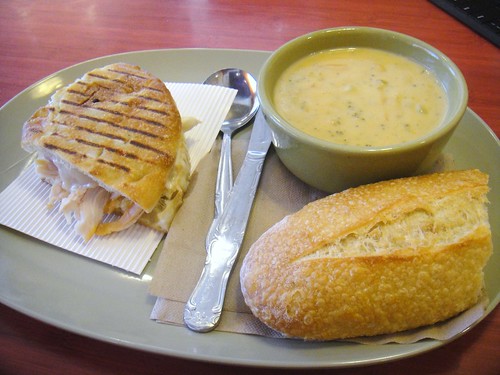 I’ve already visited another location of Panera Bread before (the Yonge & Dundas one downtown), but since I visited this uptown location at Yonge & 16th lately, I decided to still blog about it. :]

I’ve passed by this location plenty of times and always wanted to go in.  I had a productive business lunch with Ronny here and it seems that all the Panera Bread locations are pretty standard.  After you order at the counter (it was unfortunate that breakfast finished early at 10:30 since I wanted to try their breakfast sandwiches), you also take a little tracker device to bring to your table.  After a few moments, there will be a runner who brings you your food!  I still love this idea and I talked about it in my first visit to Panera Bread.

On this visit, I ordered the cream of broccoli soup again (the ‘pick two’ menu) and the Frontega Chicken Sandwich with an apple.  However, when the runner came with my tray of food, I got the French baguette instead of the apple (you could choose between an apple, baguette, or a bag of chips).  I’m not one to make a big deal out of a little mistake like this so I just kept the baguette.  It was funny because Ronny also got a baguette instead with his meal even though he didn’t order it either.  I noticed afterwards that other people did get an apple so the person who served us must have had baguette on his mind all day or something… lol.

The cream of broccoli soup was creamy and heavy just like when I had it last time and the sandwich was all right.  The French baguette was hard and not that enjoyable.  This location seems to be more noisy with more kids running around than the other one.

Oh, Panera Bread, what else can I say about it? 🙂