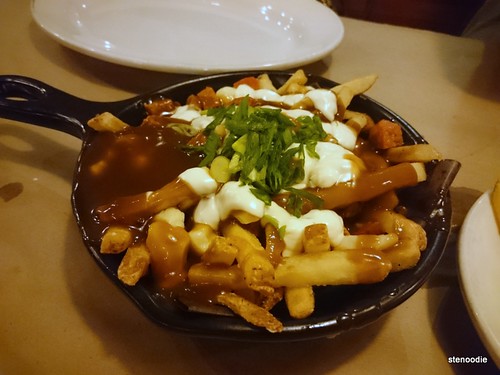 After watching “Into the Woods”, Tracy and I ventured over to Montana’s BBQ & Bar for a yummy dinner.  The restaurant was packed inside on a Friday night and there were actually many celebrations dinners going on — over the course of our stay, we heard four birthday songs sung by the staff to the birthday boys and girls.

At Montana’s BBQ & Bar, if they know it’s your birthday, they present you with a dessert (not sure if on the house or not) with a sparkler/candle and sing happy birthday to you and give you a big moose hat to wear.  It’s pretty funny and a definite moment to remember with a picture. 🙂 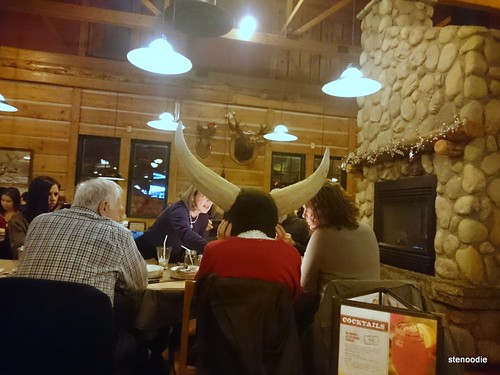 There were four birthdays that night, one of which was this 90+-year-old-lady’s birthday. How cool! 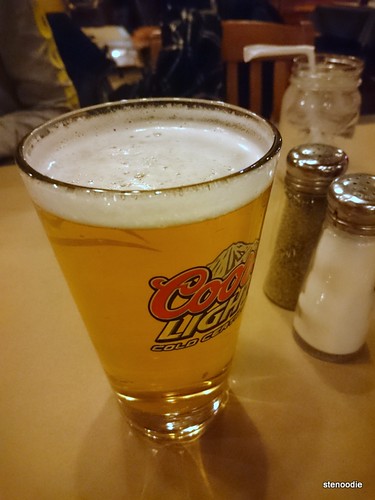 I’ve been to Montana’s BBQ & Bar at least two times before with the last visit at this exact location.  Montana’s BBQ & Bar is a chain restaurant that has branches all over Ontario.  They serve Western/American food that is hearty and filling.  Their decor is cabin/wildlife-based so all of their furniture and interior resembles being inside a cozy cabin.  They also have moose heads hanging on their walls (reminds me of Turtle Jack’s but Montana’s is a million times better).

Tracy and I shared two appetizer-like dishes (more than enough — unlike at Turtle Jack’s): Chorizo Poutine and Tender Chicken Strips.

The Chorizo Poutine was presented in a hot black pan and looked absolutely AMAZING.  The fries were good and covered with rich, tasty gravy.  The gravy was to die for!  The chorizo was diced up into smaller-than-bite-sized pieces and scattered around the dish.  The cheese curds were perfectly half-melted yet sizable too.  This was perfectly made poutine!!  So delicious. 🙂

The Tender Chicken Strips were crispy and just okay.  It came with a side of fries which we later realized should have been changed over to a salad instead to balance out the high-GI sort of foods.  Nevertheless, I really enjoyed our spread of food. 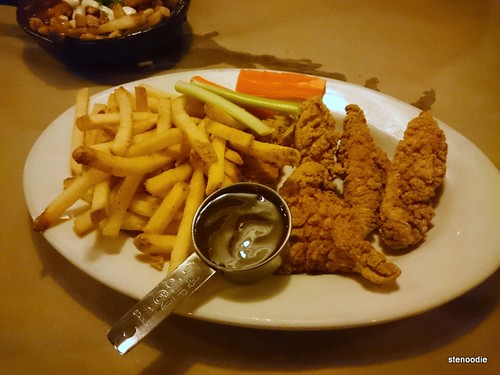 To tie our meal up and to make up for the terrible dessert we got at Turtle Jack’s, we ordered the Pineapple Upside Down Cake as dessert.  This is something I’ve heard of in the past but haven’t really ventured into trying. 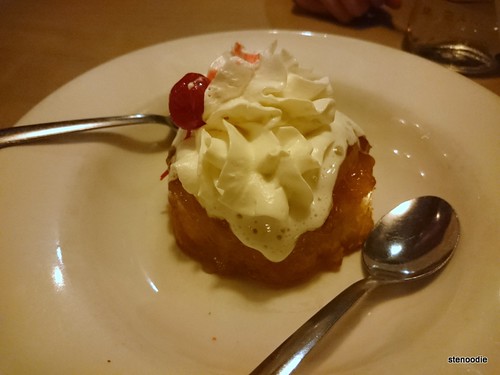 Pineapple Upside Down Cake. $5.99
-a decadent, buttery white cake with a caramelized pineapple slice served with whipped cream, Maple Whiskey Caramel sauce, and of course, a cherry on top

The Pineapple Upside Down Cake came as a light white sponge-like cake with a single slice of caramelized pineapple sitting on top and whipped cream melting down the sides.  It was a light cake that I enjoyed.  It was cool to try this dessert! 🙂

I’m sure this won’t be my last time at a Montana’s as I do quite enjoy their food and atmosphere. 🙂

March 8, 2019:  On this visit to Montana’s, we had a quick dinner before our movie next door to watch “Captain Marvel.”  (I believe they used to be called “Montan’s Cookhouse”, but now are termed “Montana’s BBQ & Bar.”) 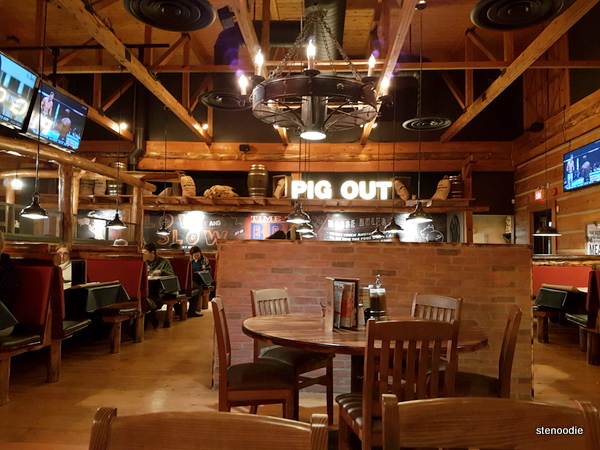 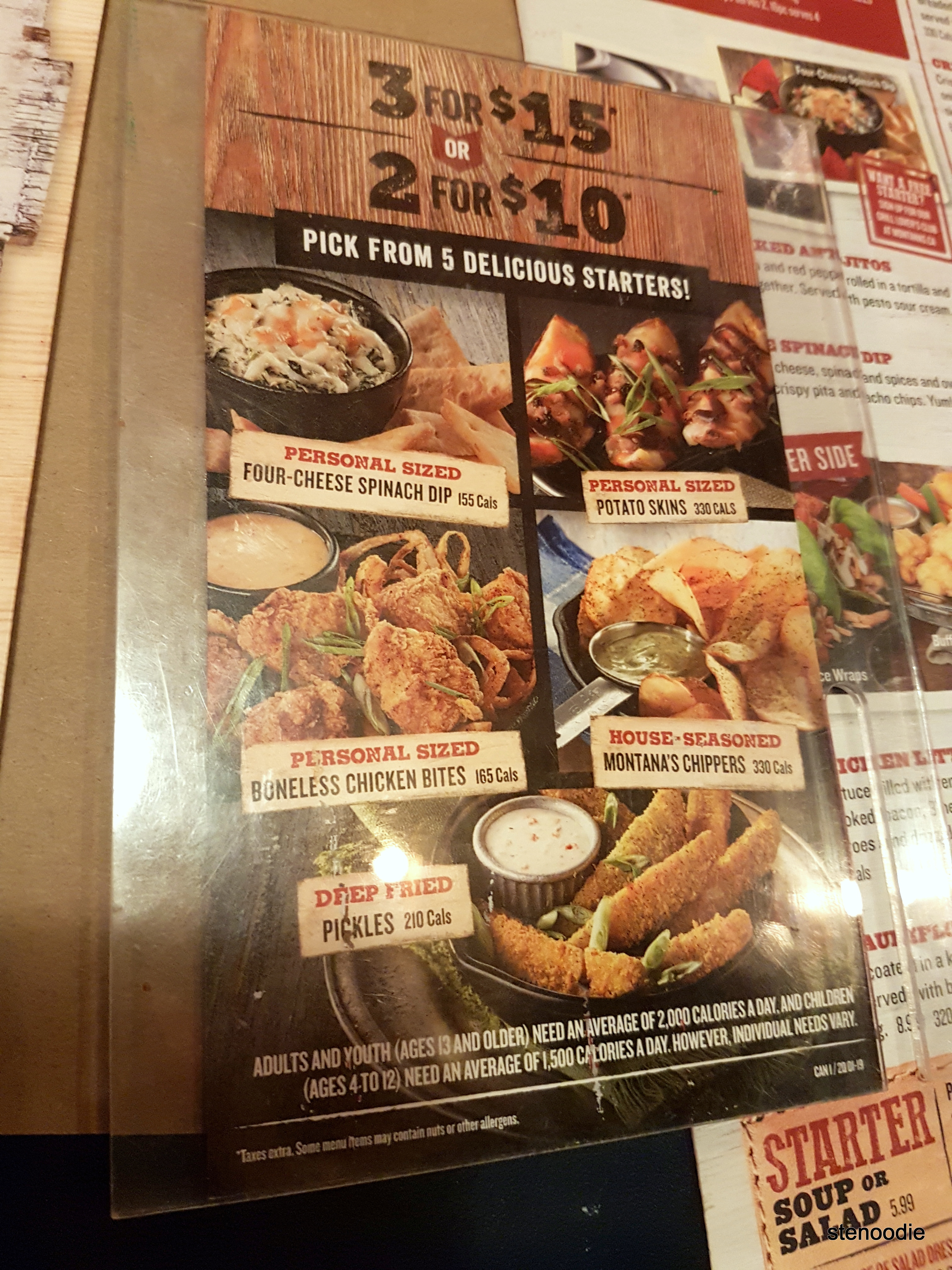 It was a Friday evening and we got seated right away.  I noticed that the menu featured two appetizers for $10 or three appetizers for $15, which I thought was a cool deal.  I chose the Personal Sized Boneless Chicken Bites and the Personal Sized Four-Cheese Spinach Dip while my partner chose the Bison Burger.  We informed our server about having only an hour to dine in since our movie time was at 8 p.m.  He was happy to comply with our request.

True to his word, the food did come out quickly (it came out even before our adjoining table who had ordered their food before ours).  I appreciated the quick service.  However, even though our food had arrived, the server had neglected to bring us any utensils.  I flagged down the hostess who was walking past our table and she provided them to us. 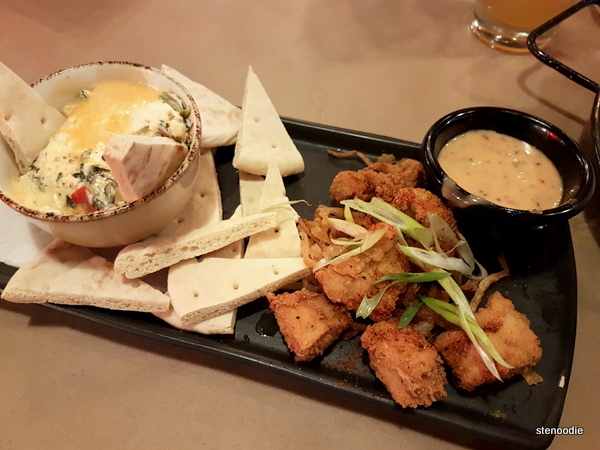 The two appetizers for $10 were super tiny portions!  I understand they mentioned “Personal sized” on the menu as a warning though.  The Personal Sized Boneless Chicken Bites were pretty good.  The meat was very tender and lightly seasoned.  There were only about seven pieces though…

The Personal Sized Four-Cheese Spinach Dip is not a true cheese lover’s appetizer.  Not to mention the small size but it was mostly cream cheese instead of the advertised “four-cheese”.  All I could taste was cream cheese which is a very budget item to use in a dip.  There was also barely any spinach in the dip.  I wouldn’t recommend ordering this at all.  The saving grace was that at least the baked pita chips were warm and chewy. 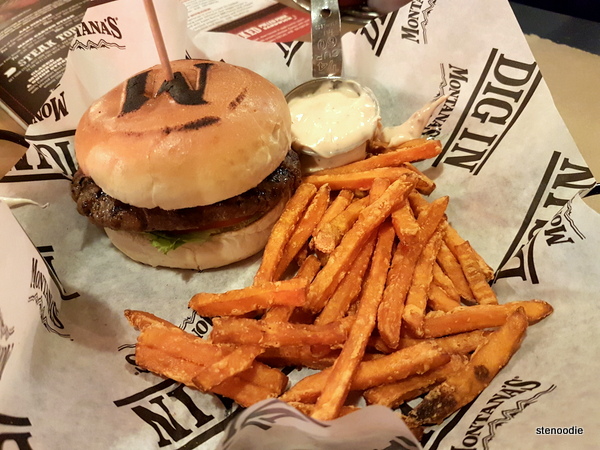 A group next to us was celebrating a birthday and again the infamous birthday moose hat came out too.  It’s always fun to see how the birthday boy or birthday girl reacts when wearing the big moose hat at Montana’s. XD