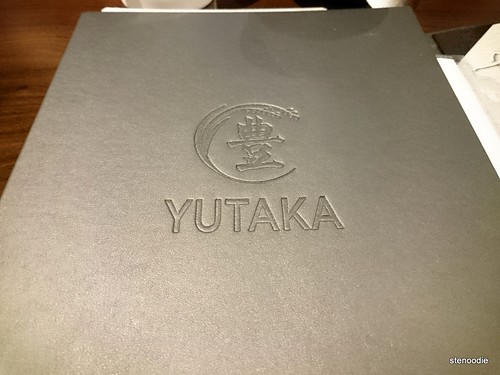 After a superior delivery of another Entrepreneur Seminar at the Toronto City Hall (we’re doing it big nowadays), we headed to a restaurant that was big enough to fit 20 of us for a late dinner.  Yutaka Japanese Cuisine is only a short walk from the City Hall, and we took up the biggest table at the restaurant.

Yutaka is an a la carte Japanese restaurant located on Dundas in downtown Toronto.  When we walked in, we were the only ones in the restaurant — we believe they were about to close but couldn’t pass up the opportunity to serve 20 diners (any business owner would be silly to decline such a big job).

The sushi chef was hard at work and so focused

It wasn’t until we sat down that I realized that the prices were fairly high for a Japanese dinner.  The dinner sets ranged from $20-35. :O  The service was really nice here and they accommodated us fairly well and quickly too considering how many there were of us.

They serve not only sushi, but ramen and robata (grill) items too.  It’s a classy restaurant that has a high-brow atmosphere.

I ordered the cheapest dinner set I could see which was the Roll Set Dinner, consisting of three types of rolls and the standard miso soup and side salad.

The side salad was quite frigid but fresh and crunchy.  The miso soup was not bad but Julie found it a bit saltier than she liked.

Christian ordered their sushi bar special of the day which turned out to be something called Otoro (really high fat content but best part of the tuna belly).  I’ve never tried it before but here’s a picture of it.  Christian said it was good!

Here’s the Roll Set Dinner that I ordered.  I didn’t know that the set would be so big!  It was worth the $20 more so now.  It contained eel, spicy tuna, and California rolls.  I liked the eel the best.  The sushi rolls were a great size to fit into the mouth but I didn’t find that it was that spectacular in taste.  The eel was the best roll out of the three. 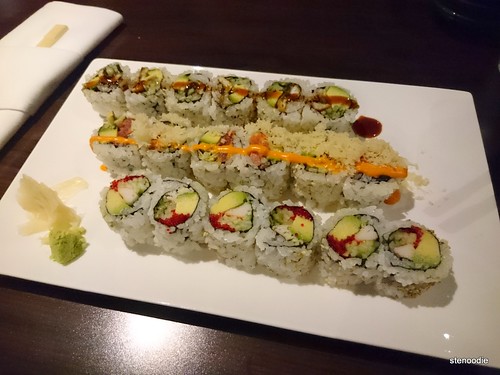 Since there were so many rolls (18 in total), I couldn’t finish it off and ended up packing half of it home.  It was cool how they gave me an actual sushi take-out box with soy sauce packets and disposable chopsticks.  It made for a great dinner the next day.

I’m not sure if I would return to this restaurant.  I have no doubt that they have high quality fish and Japanese cuisine.  The price is a little higher than I would want to pay even for good sushi and there are just way too many restaurants in this part of Toronto that I can try instead.