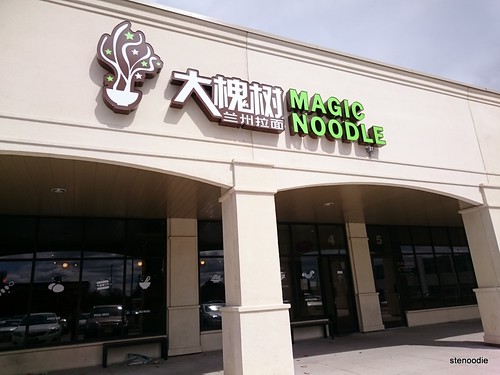 This restaurant screams “comfort food” to me.  There’s nothing better any time of the year than to sit down with a bowl of hot soup noodles with a side dish or two of seasoned meat or meat prepared in a pastry.  There’s something about this type of Northern Chinese cuisine that is just so delicious and that I like to enjoy every so often.

I’ve been to the Scarborough location of Magic Noodle before.  It was the first location that popped up in Toronto that had noodle-lovers returning back for more and more fresh noodles.  They have a chef that makes the noodles fresh for you, whether you want it to be hand-pulled (we have a running joke that the noodles are “slapped”) or Shanxi sliced noodle. 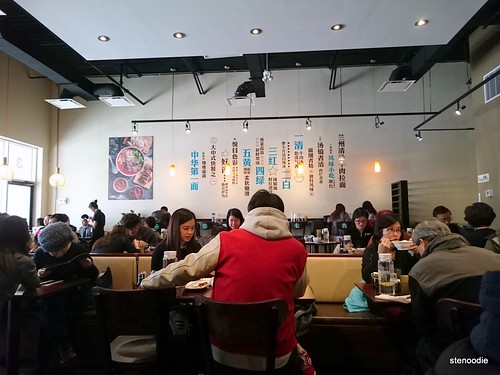 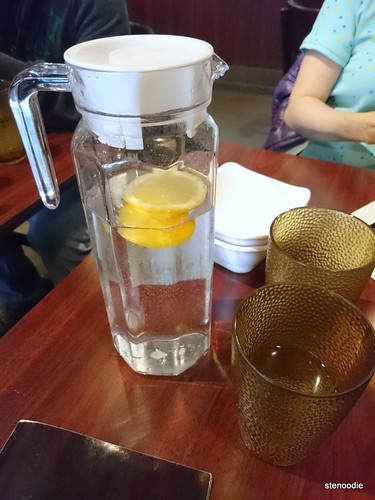 It is incredibly smart of them to already have a pitcher of (lemon!) water on the tables with a couple of spare bowls in case you want to share food.  That makes service so much faster since the servers have two things less to worry about

This Richmond Hill location is located on 16th Ave. near Leslie and is rather large for its size.  I was shocked to find out that it was completely packed on this Friday afternoon during lunch time.  There were so many people here!  They have free wifi access and the servers are quick with the orders.

The Steamed Chicken with Hot Sauce arrived first.  I had had this dish before at TamJai SamGor in Hong Kong at a popular noodle joint.  It was delicious!  This version had peanut butter in it and it was a chopped up drumstick instead of wings.  I liked the combination of hot spicy oil with the peanut butter with the delicious drumstick.  Yum! 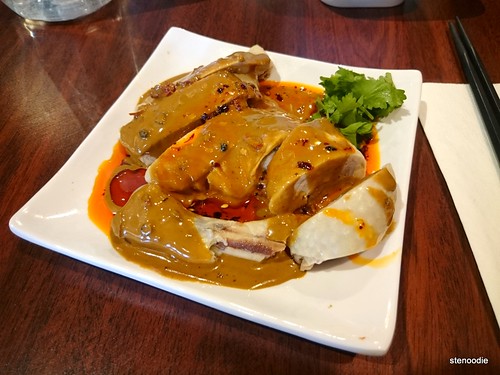 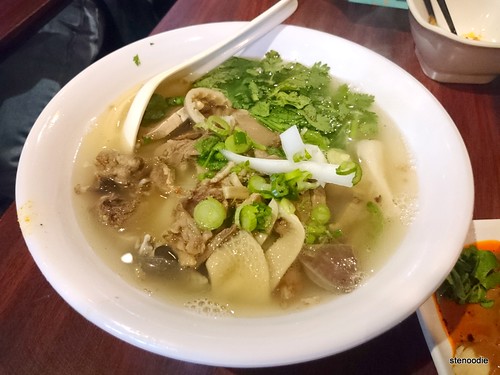 The Hand-pulled Noodle with “Haggis” arrived (we chose the traditional thickness of the noodle as you could request the noodles to be thick or thin).  Here, “haggis” is not meant to be the pudding that contains sheep parts, but rather, this was the Chinese translation of lamb organs.

Wow, I absolutely loved the noodles!  They were perfectly made, not too fine, had some consistency and chewiness to it, and tasted so good with the broth that was not too strong in taste.  The noodles were just really, really good!  The lamb organs were just so-so.

The House Special Beef Burger was delicious!  The pastry was a little crunchy but the beef inside was seasoned just right and was smooth and soft with bits of tendon.  Delicious!  I would order this again. 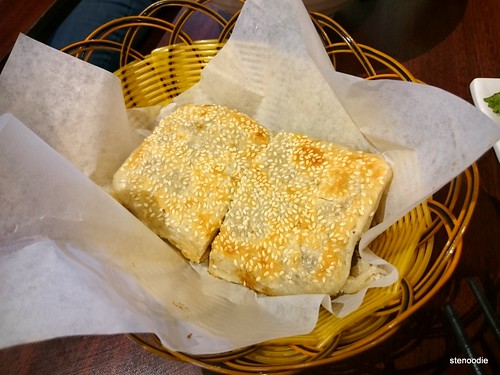 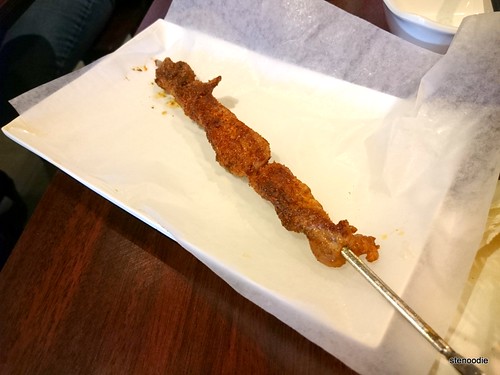 Lastly, the single lamb skewer came as a last add-on because I wanted to try their skewers and to try more on this first visit.  The server informed us that it would take 15 minutes for it to arrive which was fine.  Unfortunately, I found that this lamb skewer wasn’t as tasty as the others that I’ve had.  The best lamb skewer so far in my memory has been the one that Shaanxi Restaurant serves. ^_^

The lamb skewer at this place was too chewy with fat inside and the cumin powder wasn’t very flavourful.

I know for a fact that I’m going to return again.  This place is comfort food heaven and there are still some varieties of noodles and side dishes that I want to try (their selection of hot and cold side dishes is impressive).  Yay for another great restaurant! 🙂

The noodle chef in action and pulling the noodles!

So I actually did return a couple of days later for an early dinner/afternoon snack.  This place is now a favourite on my list; comfort food that is cheap and fast yet delicious!  On this visit, we ordered the Beef Seasoned with Soy Sauce snack and a large bowl of the House Special Hand-Pulled Noodles. 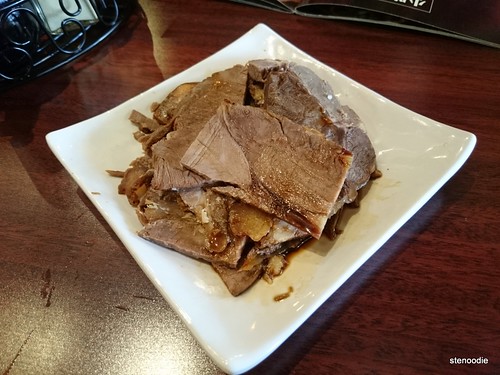 I noticed that the server who served our table wasn’t very professional on this visit.  Before I even completed my order, the server snatched the menu out of my hand and when we tried to get in an order of the leek pancakes, she informed us that there were no more left and also proceeded to take the menu out of our hands quickly.  What the heck?  If you are smart about running a food business, you would recommend something else on the menu instead of just rudely terminating the customer-server conversation.

The Beef Seasoned with Soy Sauce dish wasn’t very good.  The beef was rough in some areas and a little too sour since the soy sauce was seasoned.  I wouldn’t recommend ordering this dish. 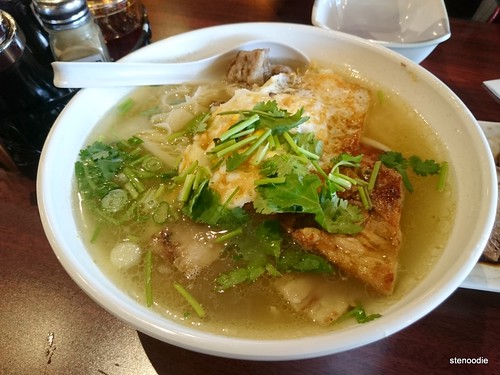 Also, we found out that we forgot to request for the thickness of our noodle after placing our order.  We also found out that the server asked the table beside ours what level of spiciness they wanted their bowl of noodles to be.  She didn’t ask us that at all!  No wonder the picture of the noodles in the menu looks spicy red but when ours arrived, it was plain soup.

The noodles themselves were just as good as last time except they were a tad thicker.  The broth was delicious and I drank a lot of it.  This bowl of House Special noodles contained a fried egg, lamb tendons, a pork chop, and lamb intestines.  The pork chop was really nicely seasoned and the lamb tendon was good too.

I know for sure I’m going to return again to this restaurant.  I forgive the server’s rude behaviour today as I adore the food in this restaurant too much. :3 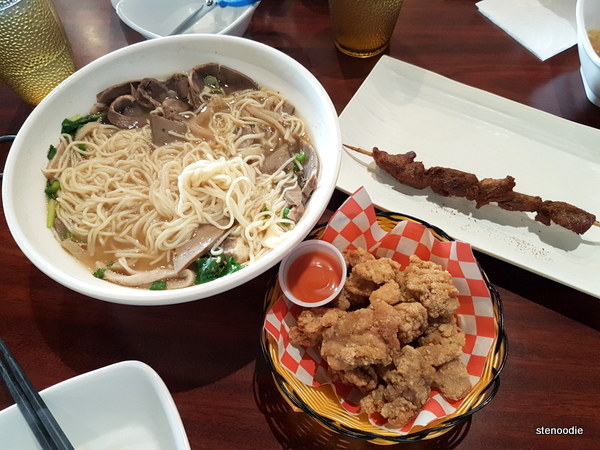 February 23, 2019:  I just wanted to do a quick blog post about returning back to this restaurant after neglecting it for quite a while.  I once again loved the items at this restaurant.  There are so many noodle restaurants in the Richmond Hill and Markham vicinity that Magic Noodle really has to compete with the others now.

On this visit, we ordered  the number 110 “Organ Donor” (why do they call it this?) noodle with lamb stock, haggis (intestines), cilantro, scallions, and beef tripe.  I asked for the thinnest type of noodles (I am so into thin noodles these days!).  The noodles were great but became soft and mushy quickly in the hot broth.  I really enjoyed the broth!   In fact, I finished the entire bowl of soup.  The beef tripe was really tender but the intestines were too bland and tasted “crumbly” to me. 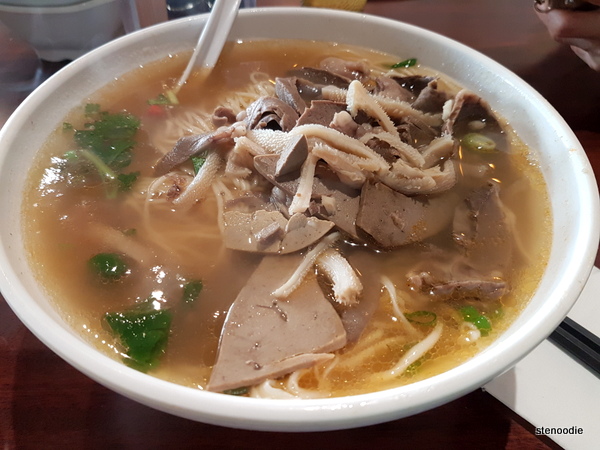 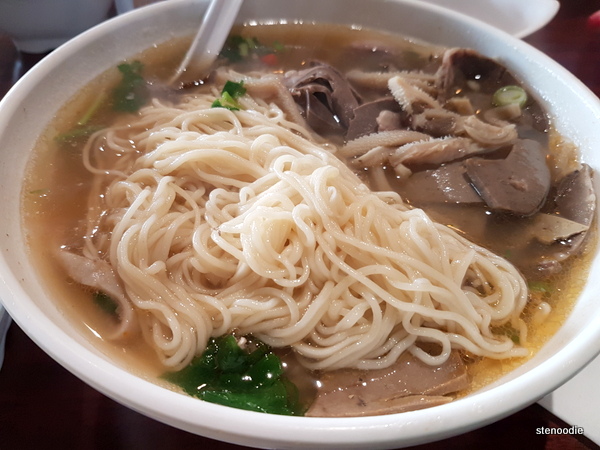 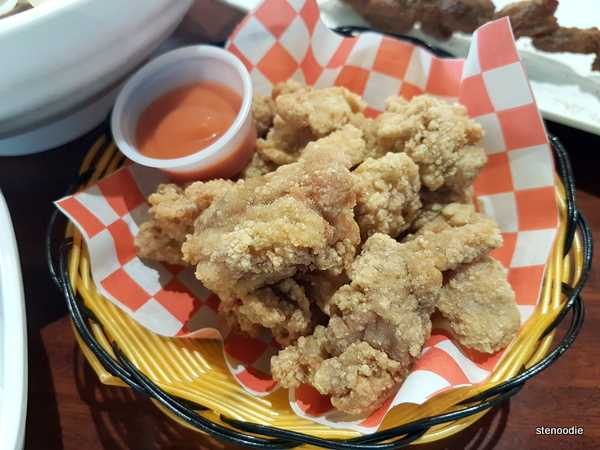 We also ordered a side of Popcorn Chicken and a lamb skewer.  Their prices have gone up.

To my surprise, the Popcorn Chicken was so perfectly done and to my liking!  It was a small portion but not bad for a snack.

The Yang Kebab (lamb skewer) was so-so.  It was more fatty than actual meat and the cumin powder wasn’t very apparent.  I still love this place after four years though. 🙂 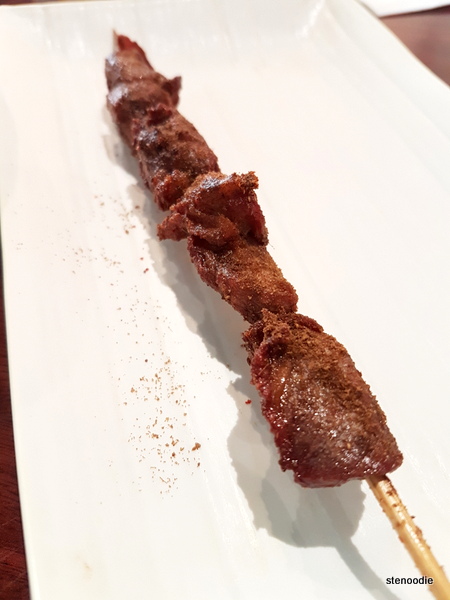