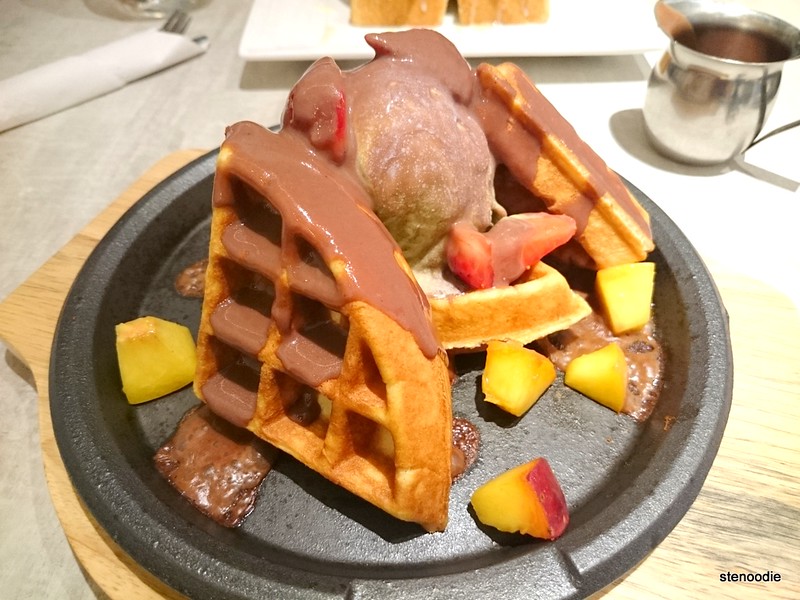 Located at 30 Gibson Drive in Markham

This is another restaurant that I’ve been seeing a lot of recently on my friends’ social media pages that I have been meaning to try out (social media works and is so powerful!).  I got to try this out recently! 😀  Sweet Esc is a new Asian dessert cafe in Markham located just north of Steeles at a plaza on Warden (there is a Chatime there).

Sweet Esc specializes in an in-house dessert where it is served on a hot plate and you pour steaming hot chocolate sauce (or any other flavour) on waffles or a brownie so that it sizzles.  It makes for a great picture and also video (didn’t take one though).

On this Saturday night after 9:30 p.m., there were quite a lot of people here.  The place itself isn’t big at all and isn’t the most warmly decorated place; it’s very stereotypically Asian.  There are minimal colourful decorations; most of it were white walls with some plain decor on the wall.  Maybe it can be a tactic for people to just eat in and leave so that they can have more customers.  Either way, I think it would be great if they can improve the colour of their walls or make the place a little more warm.

Menu of the Hot Plate dessert

Again, I already knew what I wanted to order.  I wanted to try their homemade Belgian waffles on a hot plate!  I chose the waffles plus matcha ice cream with chocolate cream and fresh seasonal fruits.  (You can also choose brownie instead of waffles, other flavours of ice cream and sauce and toppings as well.)  I was excited. 😀 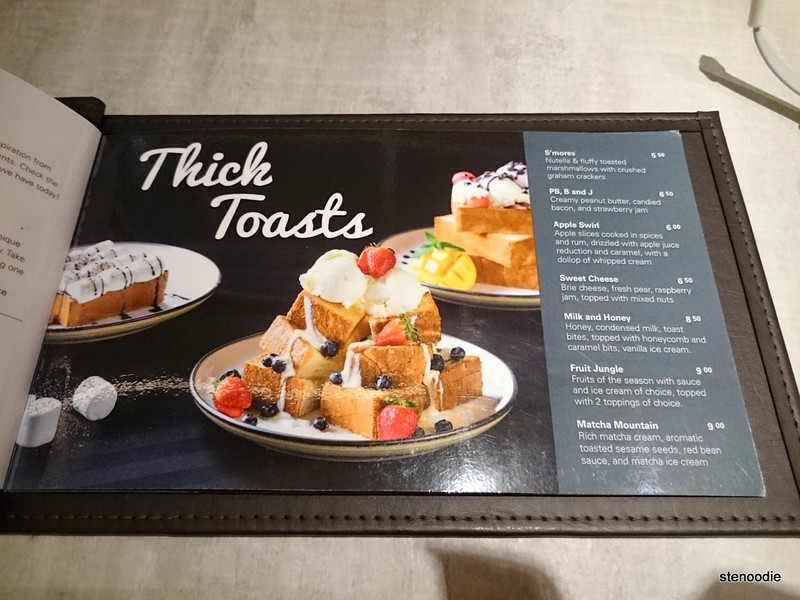 Thick Toasts! This reminds me of dessert creations in Hong Kong

Jason had already tried the waffle on a hot plate before so he chose the Milk and Honey thick toast.  This was actually incredibly impressive when it arrived.  It was a mountain of different rectangular-shaped toasts with condensed milk, honey, and ice cream.  I tried one piece and the toast actually had a rich taste of condensed milk embedded within it.  It was so good!  The portion was gigantic too! :O 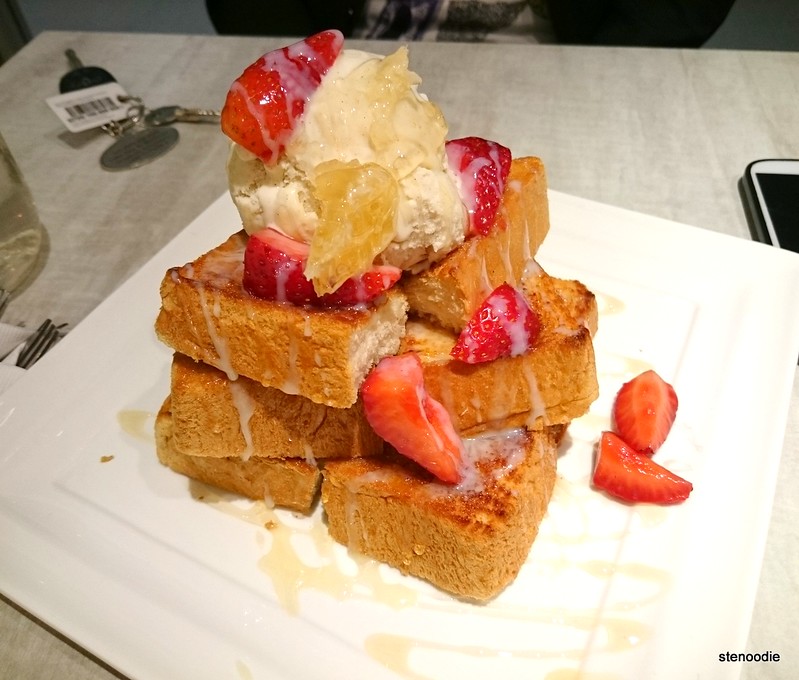 Mine arrived a little after the thick toast and when it did, the server informed me that it was best for me to pour the chocolate cream on it right away.  Yes, I did indeed!  I didn’t record a video but it was fun to hear the sizzle of the hot plate as the chocolate cream slipped over the matcha ice cream over the waffle and on to the hot plate.  This was definitely a unique dessert experience. 🙂 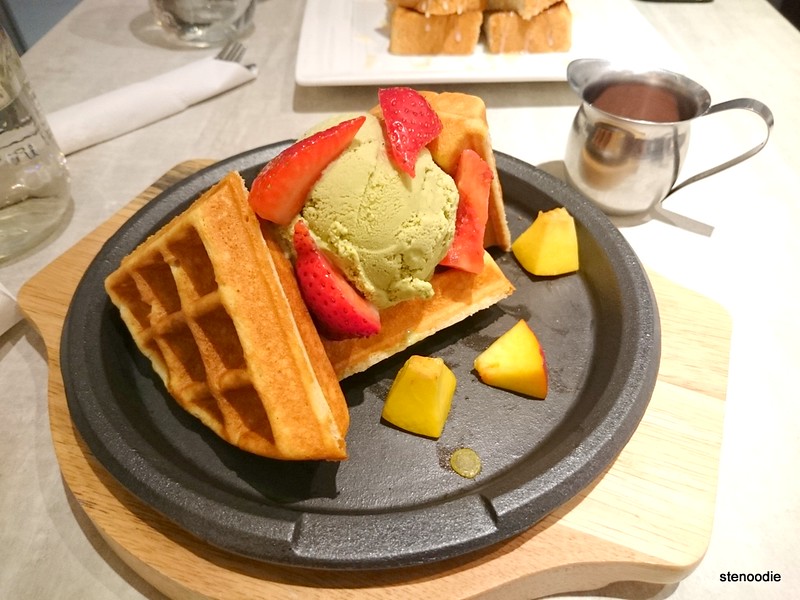 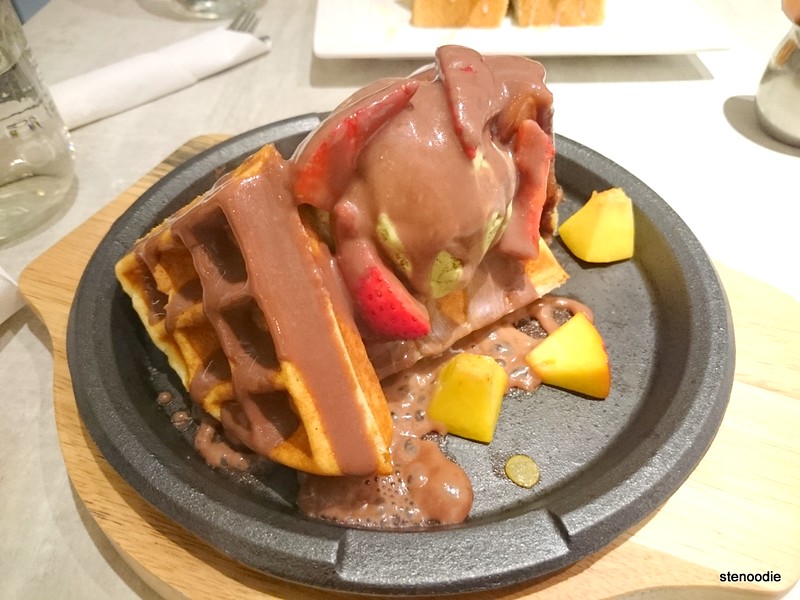 After the chocolate cream is poured on

Unfortunately, even though it was also a very impressive dessert and photoshoot-worthy, the taste of it wasn’t as tasty as I expected.  The matcha ice cream wasn’t very good or strong in taste.  The waffle was too soft and it should have been more crispy especially on a hot plate.  I don’t like mushy waffles.  The blend of fresh strawberries and plums were good though.  I think this dessert has a lot of potential but first they have to make sure that their waffles are good quality and delicious-tasting first.  After a while, I not only couldn’t finish it because it was such a big portion (it’s best to share this with at least two people), but also because it wasn’t delicious enough for me to finish it — mushy waffle with no flavour. 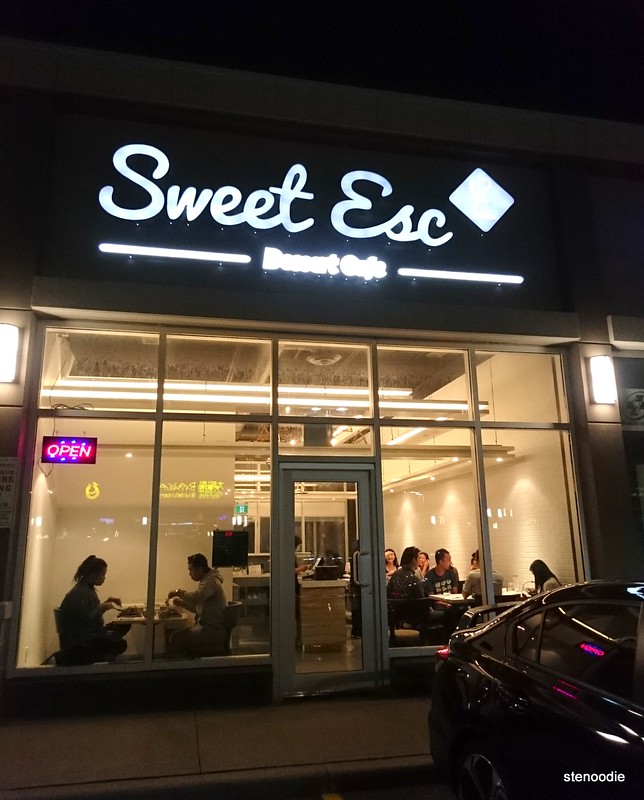 Sweet Esc in Markham! What a sweet name! 😉

Maybe I’ll return, maybe not.  I’ve already tried their distinguishing dessert now.  What else can I try if I come next time?

(Oh, and their service was very good.  Before our desserts arrived, a server came up to apologize that the desserts were taking a longer than usual to arrive.  Also, the service throughout the visit was pleasant! :))

4 Responses to Desserts at Sweet Esc