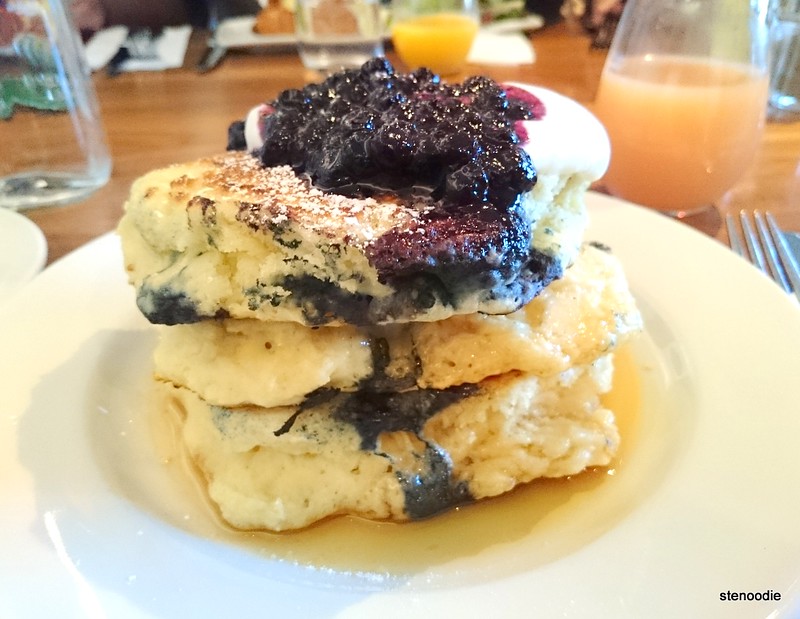 Located at 85 Hanna Avenue in Toronto

I’ve heard a lot about Mildred’s Temple Kitchen, especially from those who went there for fancy Winterlicious dinners and had a great time.  For this year’s “birthday celebration”, Joyce arranged for 12 of us to have breakfast here.  This also acted as a Thanksgiving breakfast get-together.  Thanks, Joyce!  She made reservations for us beforehand.  Apparently, Mildred’s Temple Kitchen is so popular that people have waited up to 2 hours in line to get in for food.  Wow!

Another thing I didn’t know about Mildred’s is that they are actually a very modern-looking restaurant with a big space and open-concept kitchen.  It’s beautiful in there.  While we were sitting and eating, my seat overlooked the outside where the trees were and it was like we were eating in the woods.  It is such a nice restaurant! 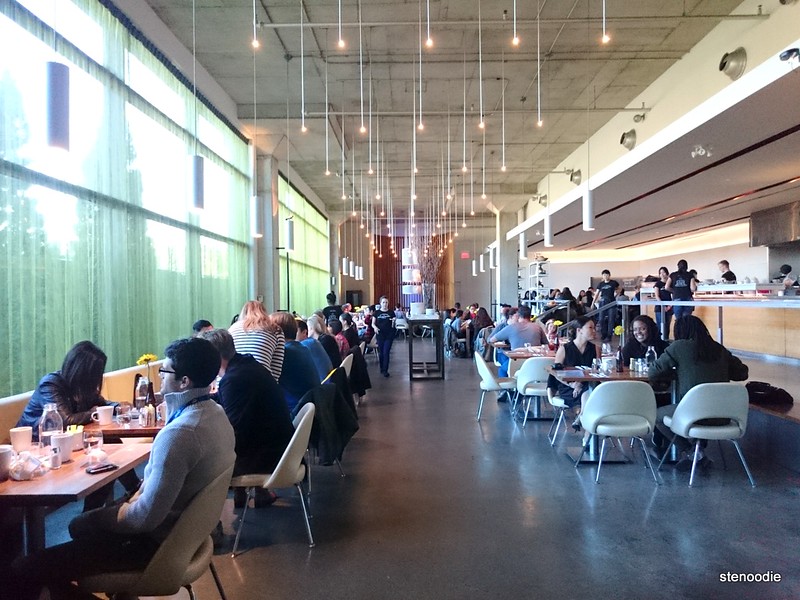 I never knew that Mildred Temple Kitchen’s was so modern and spacious! I expected a really small and inconspicuous place 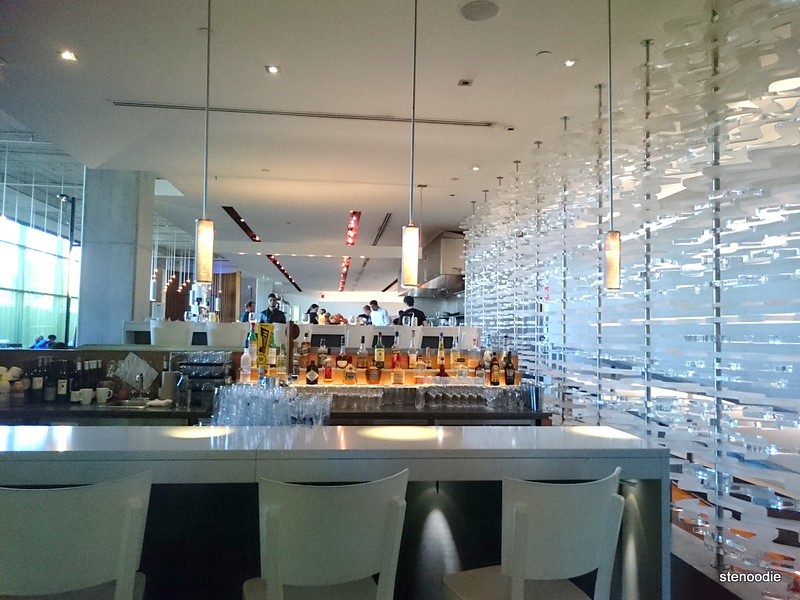 The bar with a really cool “frosted” looking wall/barrier

Upon booking for our breakfast at 10:30 a.m., Joyce also booked for us to dine the prix fixe brunch menu.  It is a menu for $25 where you get a serving of freshly squeezed orange or grapefruit juice to start, some scones and biscuits with butter and preserves, and a choice of four breakfast options: Veda’s Choice, Huevos Monty, Mrs. Biederdorf’s Legendary Pancakes, or Mildred’s Flakey Savoury Tart.  You could also order some side orders of rosemary bacon, fennel sausage, or crispy rosemary potatoes. 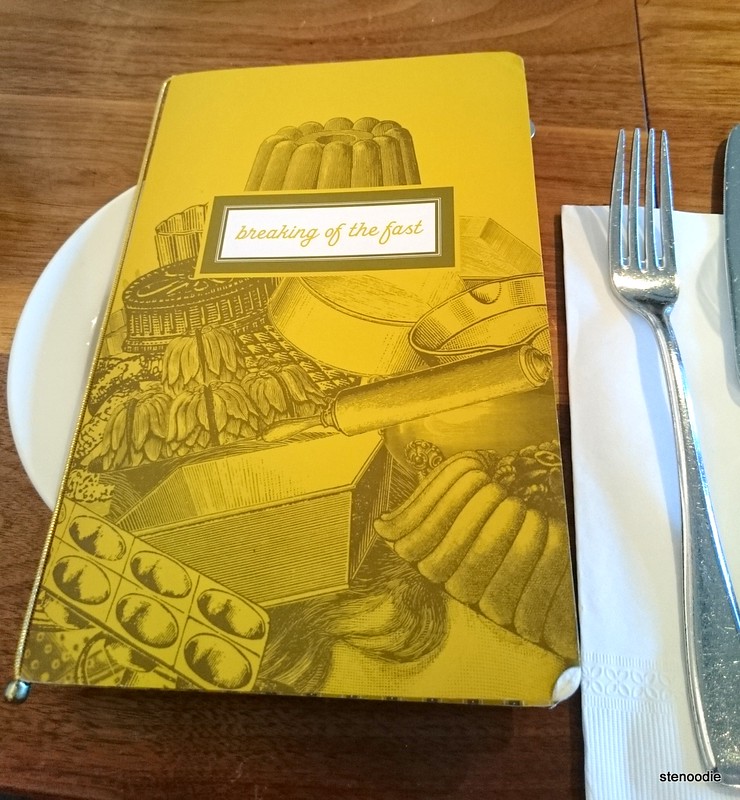 Breaking of the fast indeed! 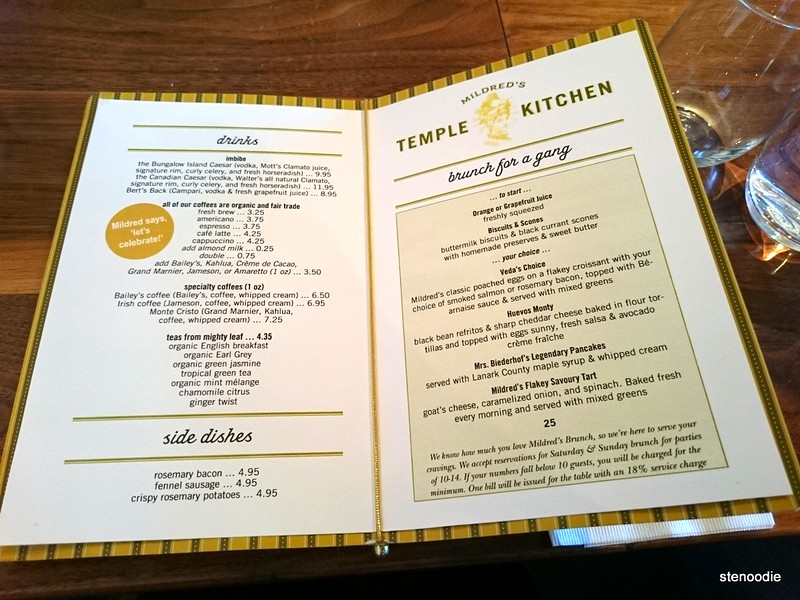 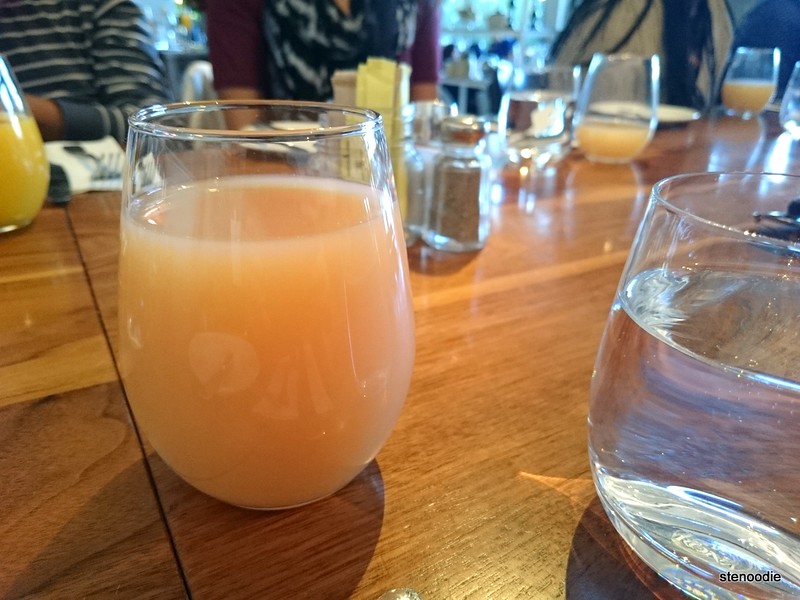 I was a little late in arriving to brunch since I overslept and drove downtown to Mildred’s instead of taking the TTC — which ended up to be a good thing because I saved time by not having to commute 1.5 hours :O.  I arrived just as everyone was finalizing their brunch choices and the freshly squeezed juice was being served.  Phew!  The grapefruit juice wasn’t too sweet.

I chose the pancakes with a side of sausage.  I have heard so much about their legendary pancakes that I for sure wanted to see what the hype was all about.  It was funny because there were 12 of us and 7 of us at the table ended up ordering said pancakes.  Our server kindly informed us that because they take special care to make the pancakes (something about cooking them “low”), it was going to take 30 minutes for the food to come out for us.

Considering that there were 12 of us, I found it a little peculiar that they only served us two platters of buttermilk biscuits and black currant scones.  There weren’t enough scones and biscuits for everyone to have one each, so we shared them.  Considering that the brunch menu was $25 each, you would think that they would ensure that everyone got their money’s worth and individual portions of the biscuits and scones… 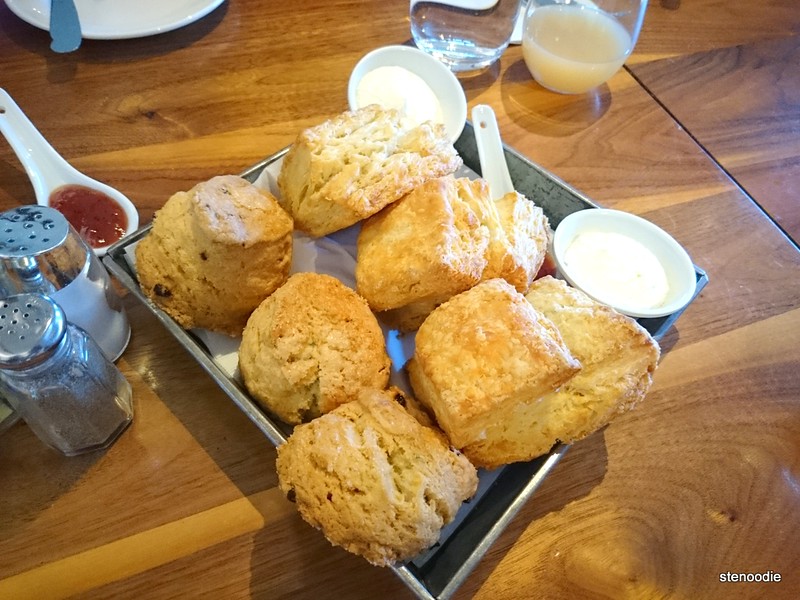 The black currant scone was pretty good, and especially after layering it with some sweet butter and preserves (but I couldn’t distinguish much of the black currant in it).  The buttermilk biscuit was also not bad and fresh. 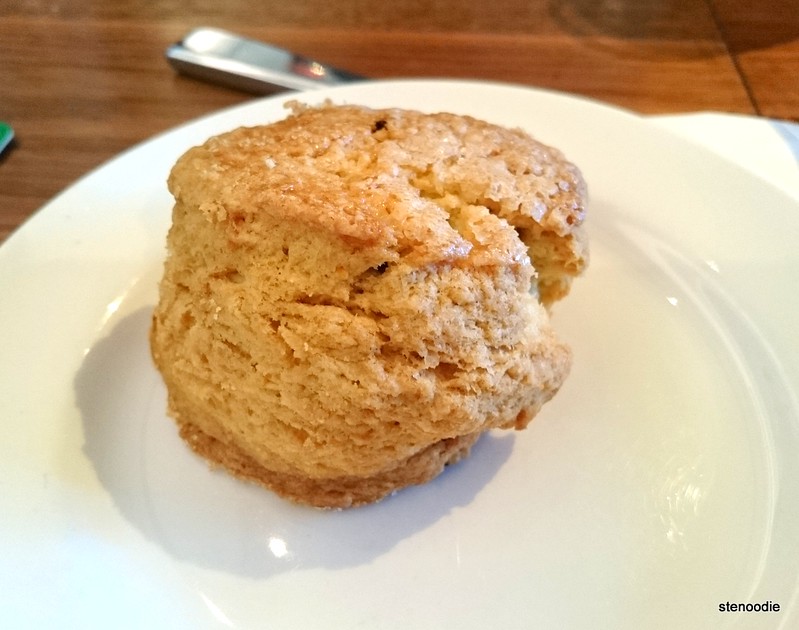 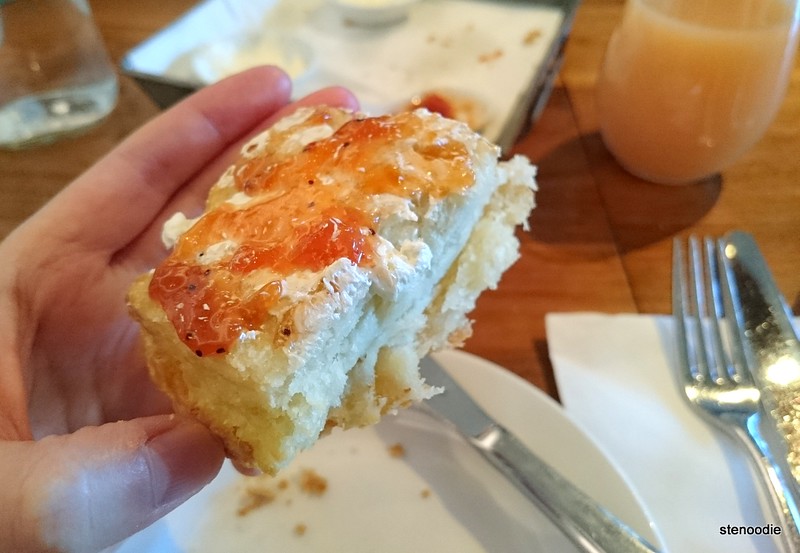 Black currant scone with some sweet butter and strawberry preserves

We had a lot of time to catch-up and chat while we waited around 30 minutes for our food to come out.  When it did, out came the cameras too.  The Mrs. Biederdorf’s Legendary Pancakes definitely were huge!  Three thick pancakes were stacked on top of each other and layered on the plate.  Light and fluffy whipped cream covered the top of the pancake like a top hat and richly purple-coloured blueberries cascaded down the side of the pancakes like a snowboarder running down a steep hill. XD  It sure was impressive!  I recently downloaded the Snapchat app so I spent a few minutes not only photographing my food like usual but also sending a snapchat of the mountain of pancakes. 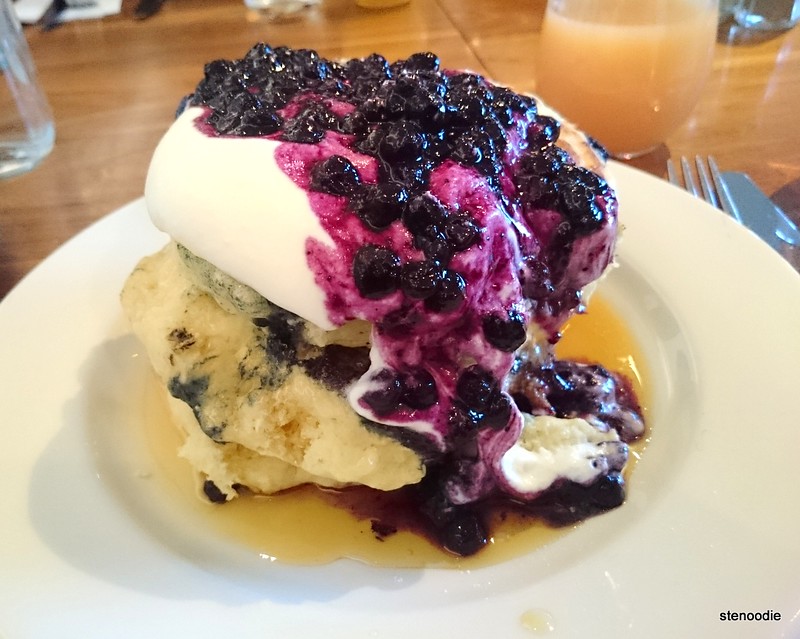 Mrs. Biederdorf’s Legendary Pancakes are known to be soft and fluffy, and when I dug my fork and knife into it and took a bite, I sure agreed with this statement.  The pancake was so thick yet fluffy and soft!  It was really good!  I especially liked the whipped cream.  The blueberries covered the entire mountain of pancake but didn’t sweeten the pancakes too much.  I also liked that you didn’t have to add too much syrup to it since there was already enough on it. 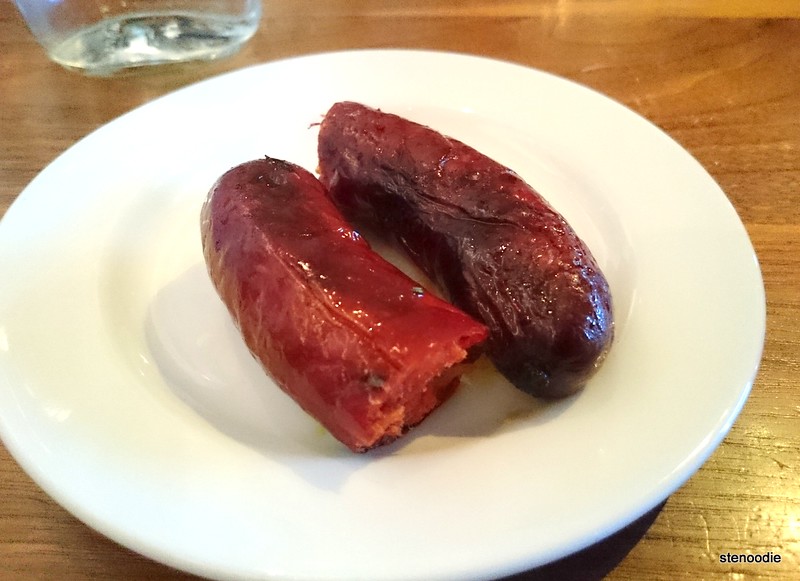 My side of fennel sausage was also delicious.  It was a thick cut of sausage and worth the quality, especially since it was an extra $4.95.  It was perfectly salty and had a nice thick texture.  I’m so glad I ordered this so that I wasn’t just eating sugary carbs the whole morning — I had some protein to balance it out.

After about 15 minutes of eating, many of us were full already.  The portions here at Mildred’s remind me of American-sized food.  There was just so much of it!  I stopped eating about a third way into my pancake stack.  There was no way that I was going to comfortably finish it all.  I gladly took it home to enjoy the next day (it actually tasted still so good the following day when I heated it up; it was still just as fluffy, soft, and even the edges and bottom were crispy.  Delicious!) 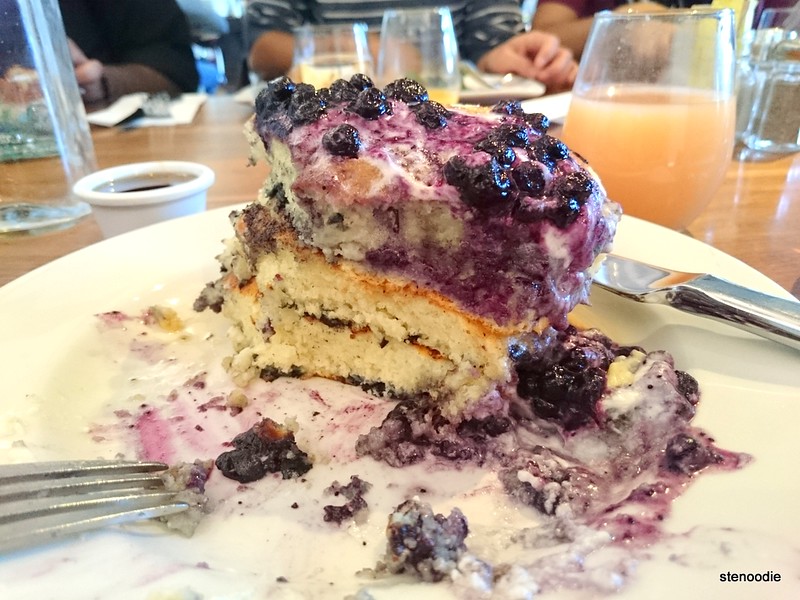 I couldn’t finish it… 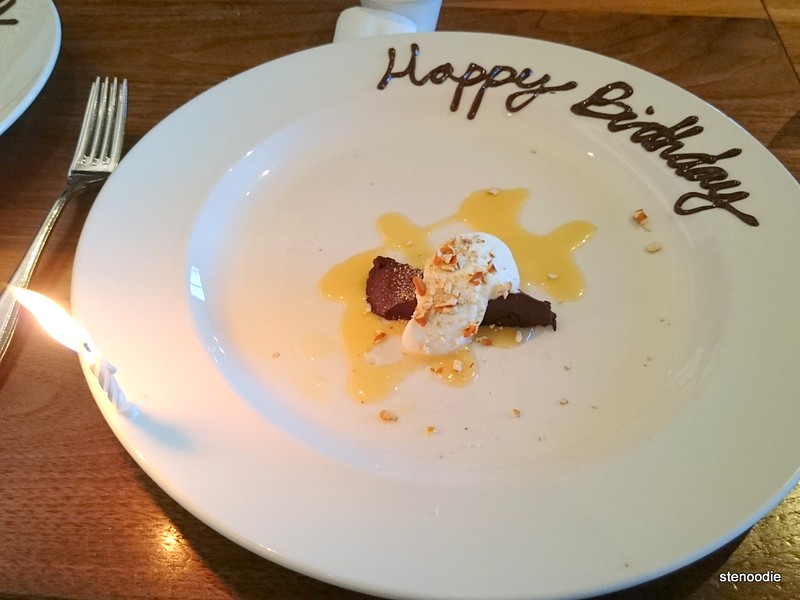 Many of my friends also took their portions home as well.  As we were sitting around chatting and finishing up the meal and our plates were cleared, we were surprised with a barrage of birthday plates!  As some of you might know, five of us actually have our birthdays in October, namely October 1-2-3-5-and-6.  It’s actually really cool and three of us used to have 1-3-5 October birthday celebrations.  This year, we get to celebrate with five October babies together.  I really appreciated how Mildred Temple’s Kitchen was able to put together these cute birthday treats for us.  It wasn’t very much, but the gesture itself was kind and sweet. 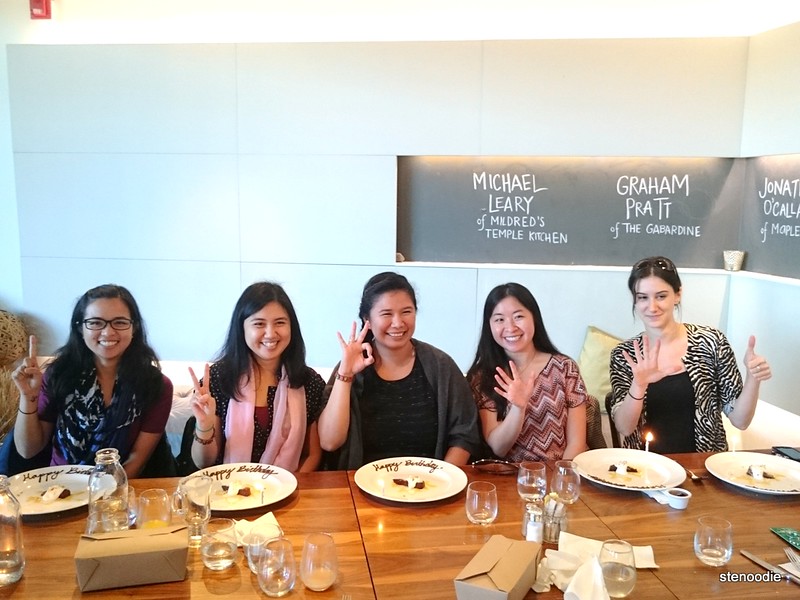 We each got a plate of a chocolate that was piled with some whipped cream and a “happy birthday” in chocolate drizzled on the side.  It was actually so delicious!!  I loved it. 🙂

I had a really good time to try out their famous pancakes but I did think that the prix fixe brunch menu was a tad pricey.  It was my choice to get the fennel sausage as a side order though, but my total including the 18% gratuity for a group came to $40.  I don’t think I’ve spent 40 dollars on a brunch before.  I’m really glad that I got to take home the rest of it to enjoy later.

Have you been to Milderd’s Temple Kitchen before?  What was your opinion? 🙂 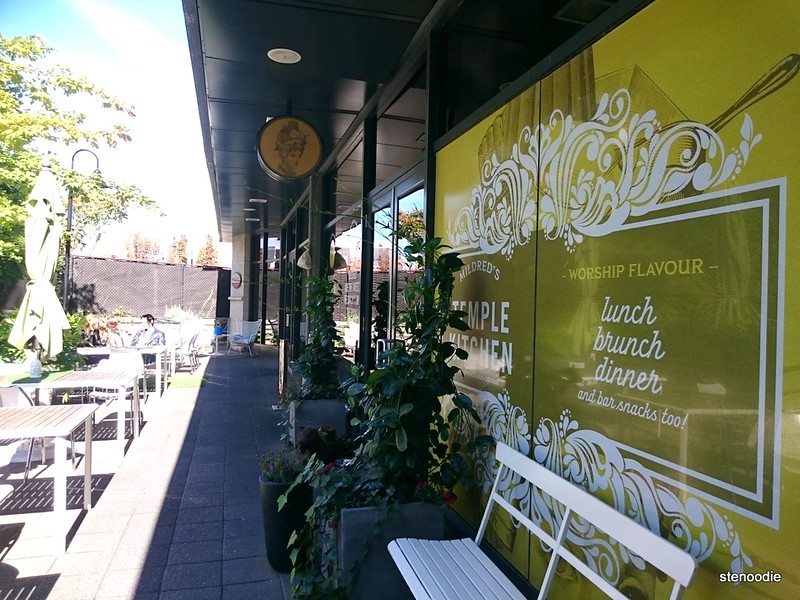