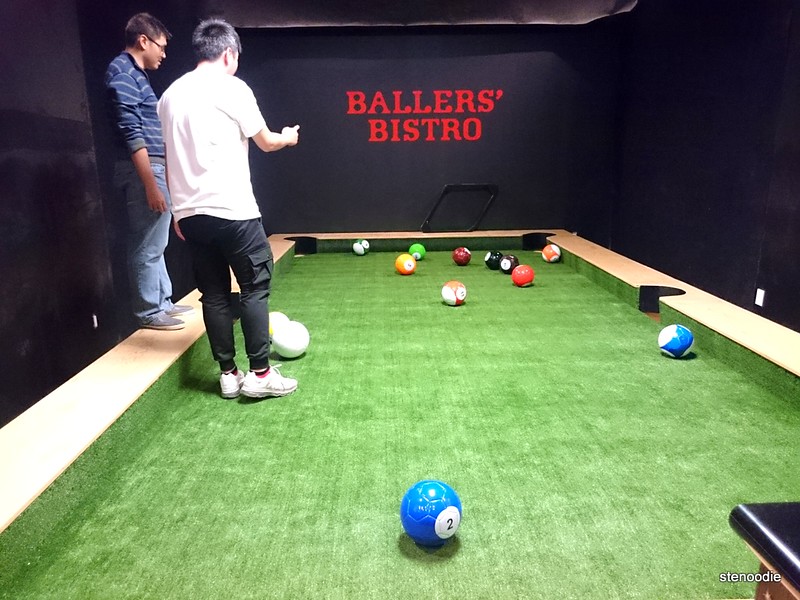 I was honoured and pleased to be able to attend a pre-opening party at Ballers’ Bistro in Mississauga.  Ballers’ Bistro is the first restaurant in Canada to offer snookball entertainment!  If you don’t know what snookball is, it’s basically a hybrid of pool and soccer.  There is a giant life-sized pool table where you use your feet to hit the pools balls (these are soccer balls painted as pool balls) to play a game of pool.  You can play with up to 6 or 8 friends.  In addition to that, you can eat and play or just dine at the restaurant.  It’s a truly unique concept!

I was invited there by Jenny and Sherif who are friends of the owners’ of Ballers’ Bistro.  We went there on a Saturday night to play snookball and to try out the food.  I love how you can go there just to eat or you can plan an entire party there to eat and play with friends.  It’s a very spacious venue! 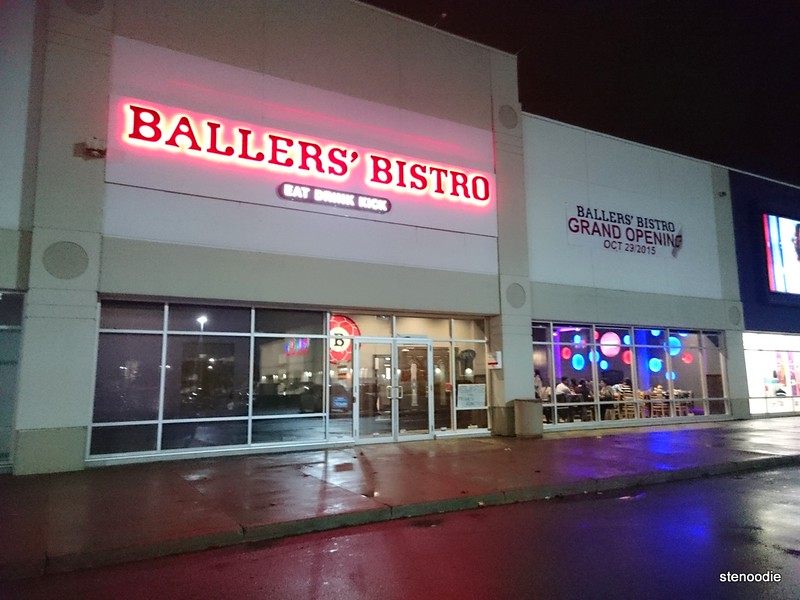 First restaurant of this type in Canada that has snookball! 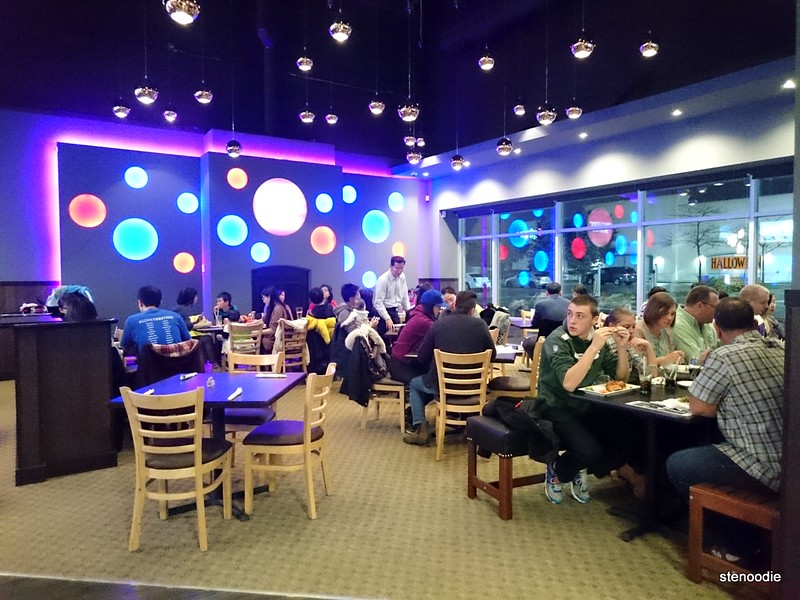 Ballers’ Bistro is located at the Heartland Town Centre of Mississauga (near Party City) at 600 Matheson Blvd. West, Unit 4 in Mississauga.  It was easy to find and when I walked in, I was very impressed with the entire design and layout of the space.  There is a dining room area if you just want to go to Ballers’ Bistro to eat.  There is also a bar for drinks.  On the main left side, there are four areas where you can book to play Snookball with a built-in bar for you to enjoy while you eat and play.  They are also in the process of constructing a VIP room for corporate events, private parties, celebrations, and more. 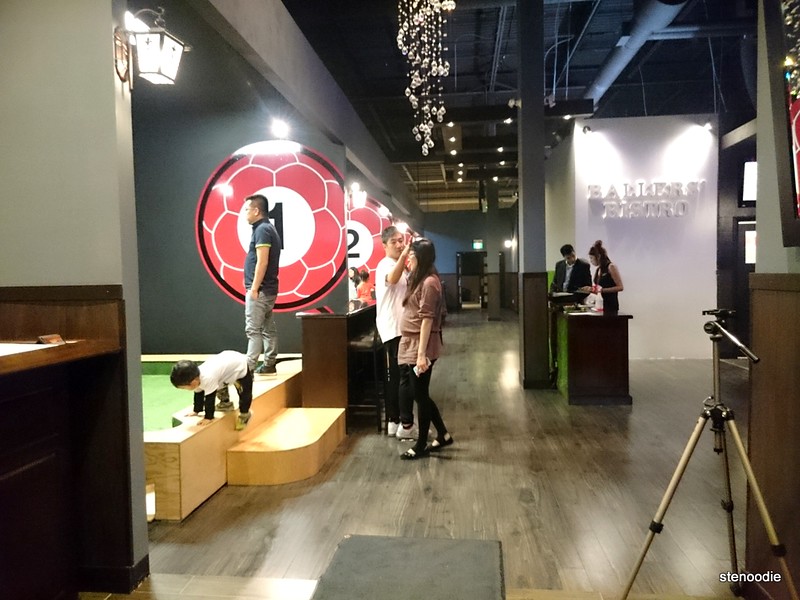 There are four “lanes” that you can book to play in 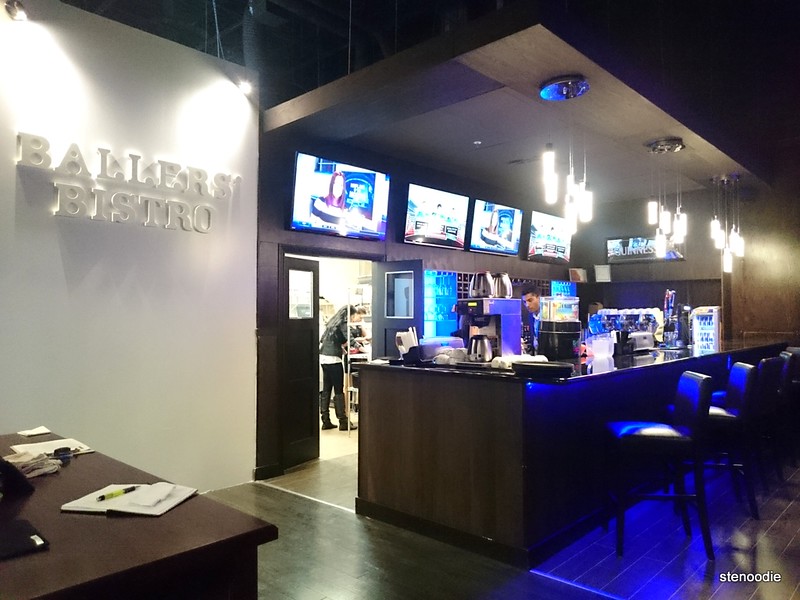 We opted to sit down at the third counter to play and eat.  We ordered drinks, a Red Snow Kone for Jenny and I, as it was recommended by the server and some food to share. On this night, because it was a pre-opening, the service and food quality were still in the works.  For that reason, I will reserve my criticisms of the food and service because the owners wanted us to give them feedback in order to improve on the restaurant.  It wouldn’t be fair for me to judge them on their very first day knowing that they wanted feedback in order to prepare for their grand opening and official first days.  I’m fair like that! 🙂

The Red Snow Kone contained vanilla vodka, sour puss raspberry, strawberry snow cone syrup, and topped with a sour strawberry candy.  Upon arrival, it looked like a kid’s drink because it was so cute with a snow cone on top.  You must drink it fast otherwise when the snow cone melts, it will overflow! 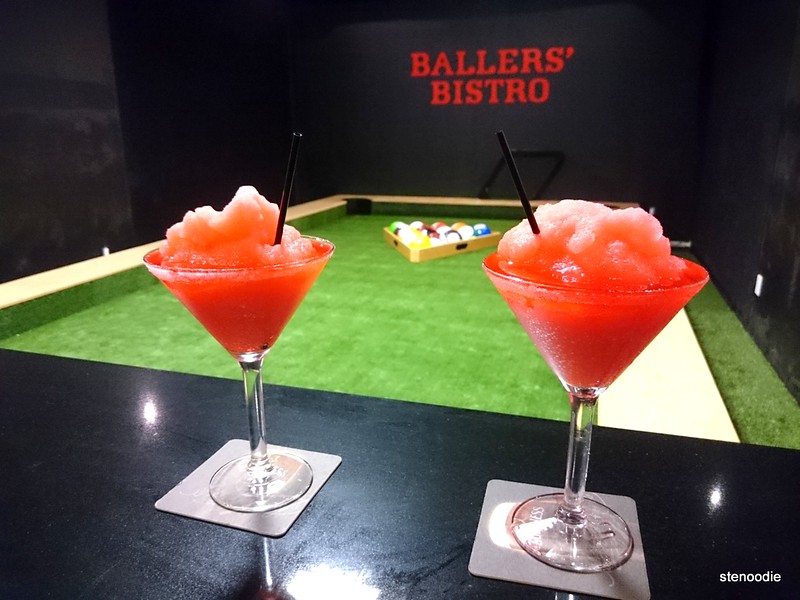 After the drink, I was still thrilled with the idea that I was here to try out this cool restaurant that you also get to play at!  We were able to start our first game and it was actually really fun!  It was a little difficult to kick the soccer ball at first to aim into the holes to win, but after a while, it was like playing pool and you just have to skillfully use your feet to hit the ball.  I used to play pool with my friend Linda since her condo had a pool table.  Other than that though, I’m not very good and still learning. 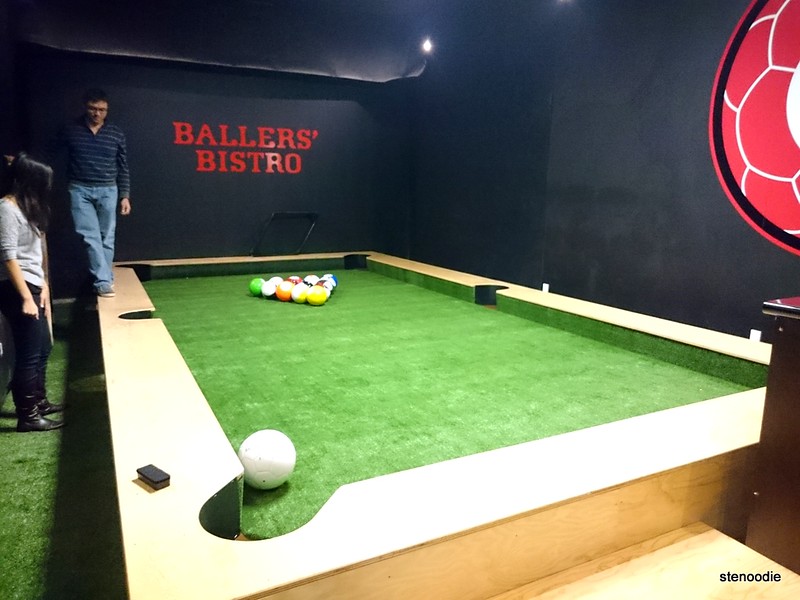 Ready to play! Scoping out how it works first 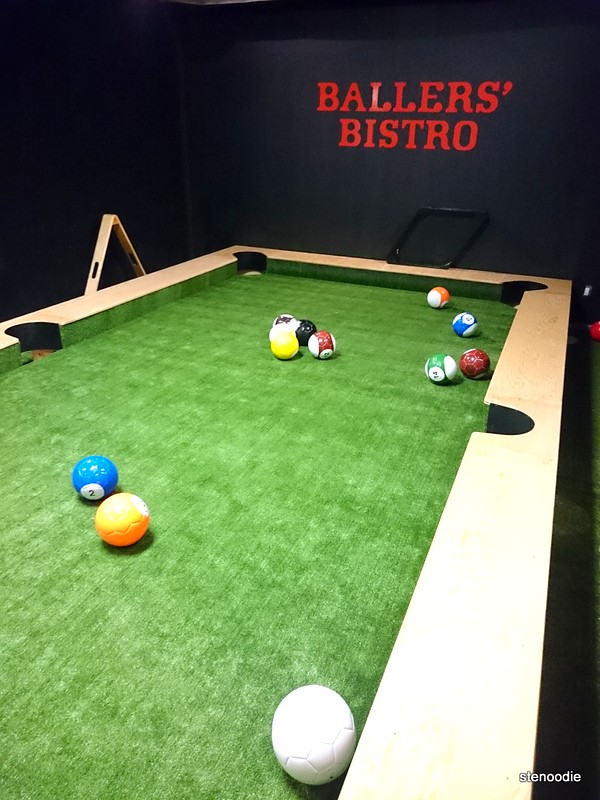 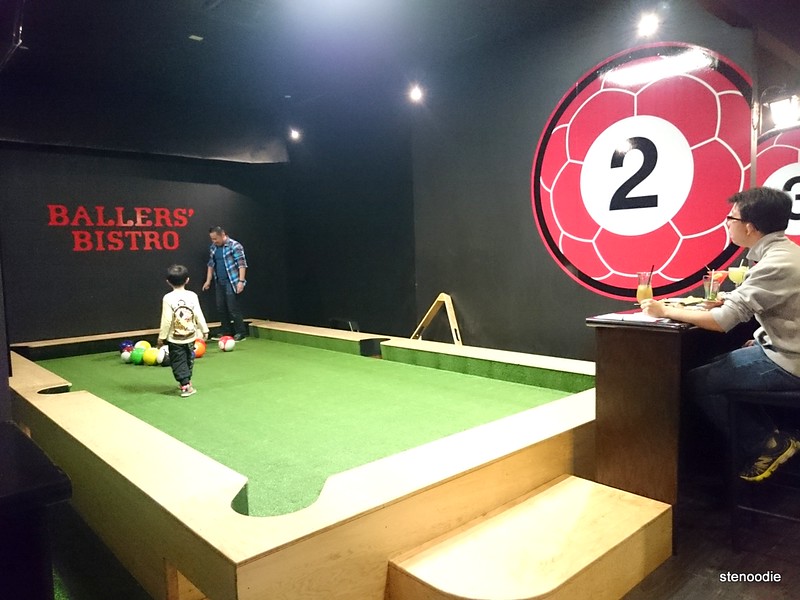 I love this… you get to eat and play or eat and watch other people play!

The three of us ordered some food to share!  We ordered the Avocado Wedge Tempura, Buffalo Chicken Poutine, Ballers’ Foie Gras Poutine, Adobo Shrimp Flatbread Pizza, and the Messy Fish Sandwich.  I really admired the selection of food that they served here.  They had so many unique appetizers, poutine, flatbread pizzas, entrees, and sandwiches!  If nothing more, people will come to this restaurant to eat the food because of the variety and uniqueness.  I have never heard of a Surf and Turf Poutine or Foie Gras Poutine before.  That is truly unique!  Also, their Avocado Wedge Tempura is also a unique and chef’s favourite.

While we were playing and waiting for our food, we were also served a plate of Edamame (which was steamed with kosher salt).  It was hot and tasted good! 🙂 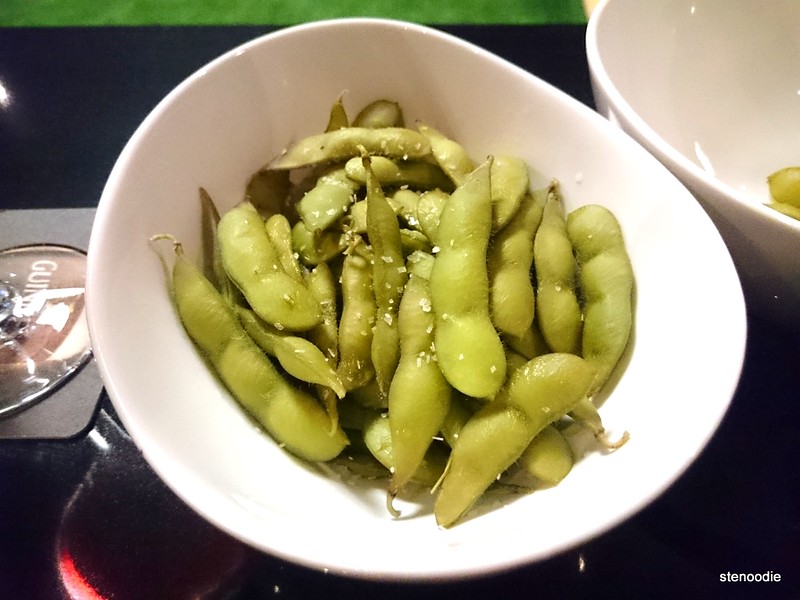 Shortly after, our plates of food arrived.  The Buffalo Chicken Poutine was rich with gravy and chunks of buffalo chicken.  I liked the fries! 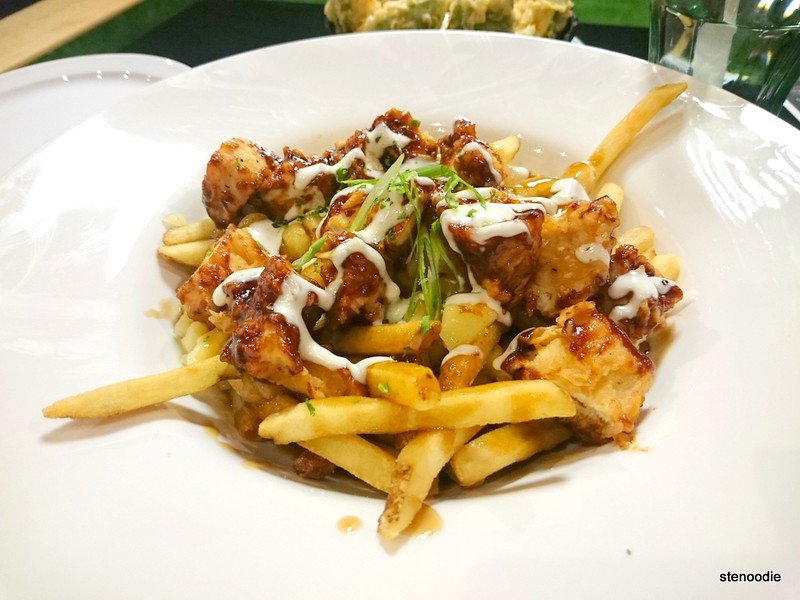 The Ballers’ Foie Gras Poutine was one that I was looking forward to and I really liked the creamy foie gras slices that were on the poutine.  It had a lot of sauce on it too which I adored. 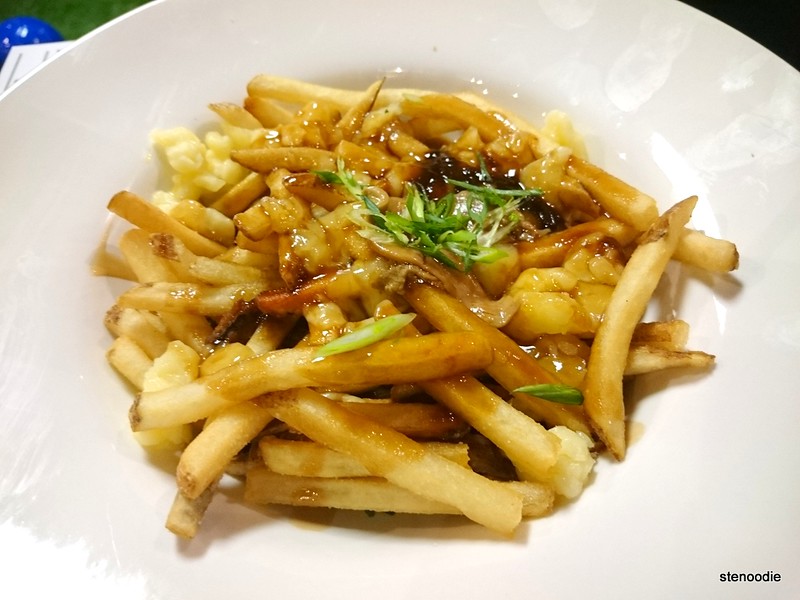 The Avocado Wedge Tempura came with beautifully fried avocado with tempura batter.  It was really well done and it was akin to tempura that you eat at Japanese restaurants.  There was a garlic aioli dip that I liked.  The avocado chunk was huge and such a decent size.  It was also so fresh and really good too.  Amazing dish! 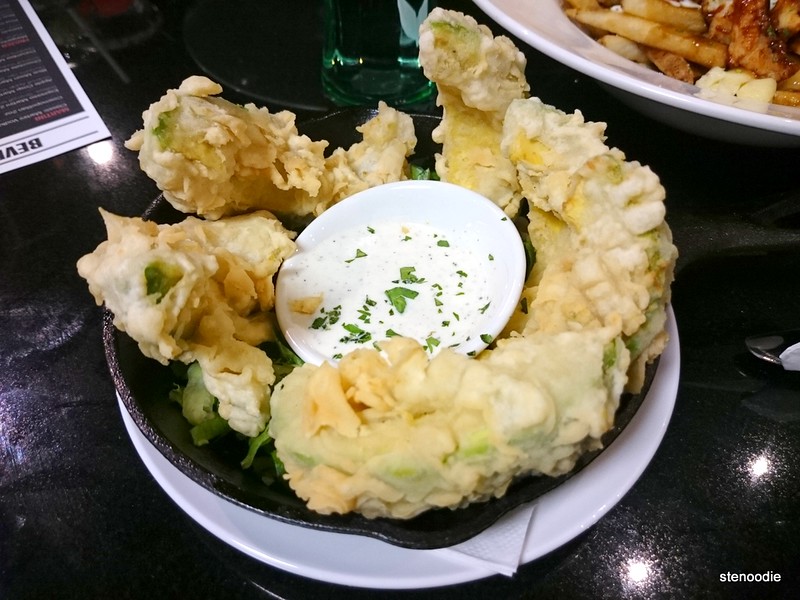 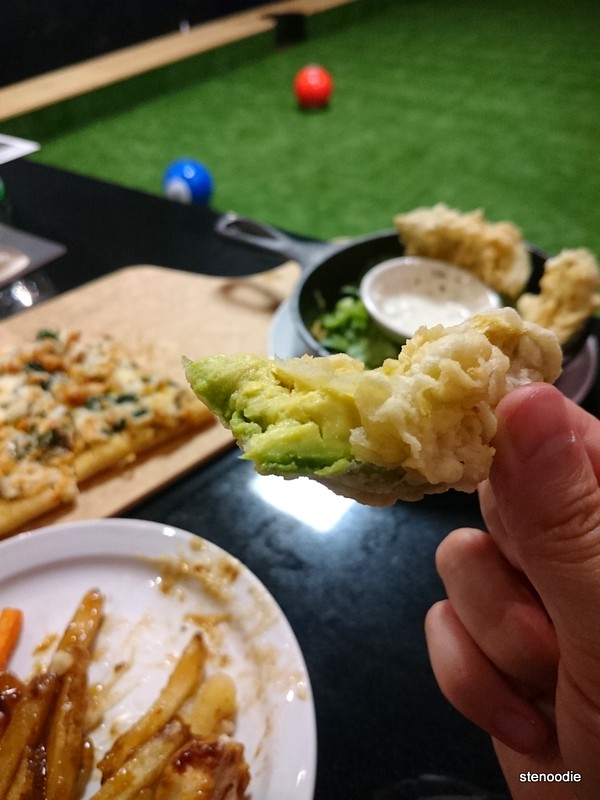 The Adobo Shrimp Flatbread Pizza arrived on a wooden board and looked amazing.  It also smelled so good!  It contained Adobo pesto oil sauce, adobo shrimp, spinach, sautéed onion, and mozzarella cheese.  It was so delicious and perfect to snack on with hands.  I loved this! 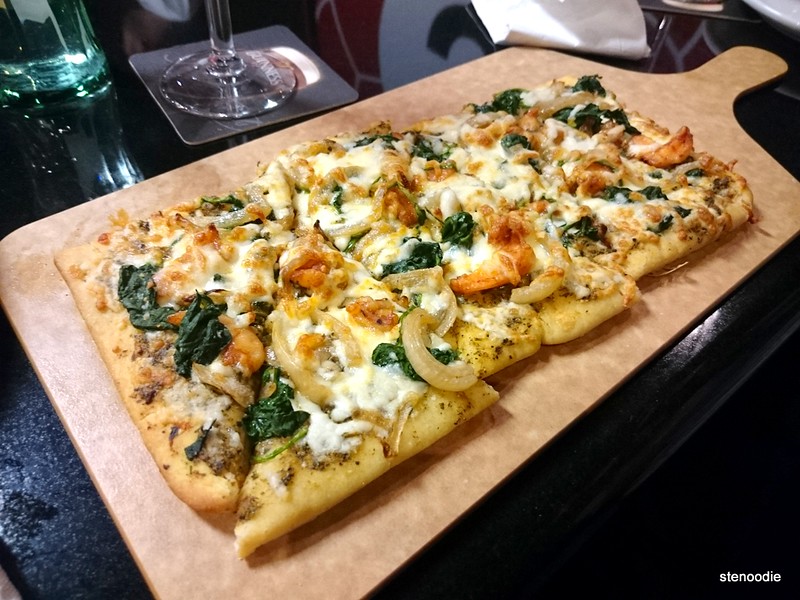 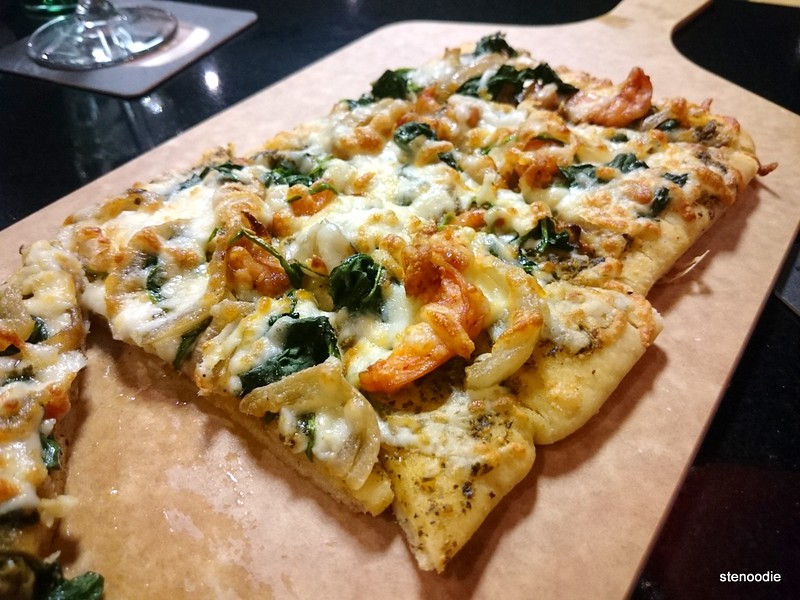 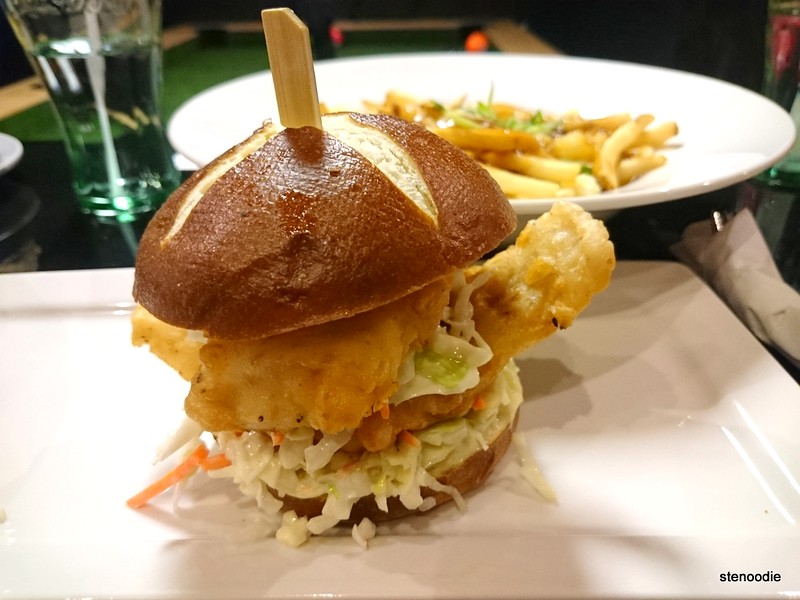 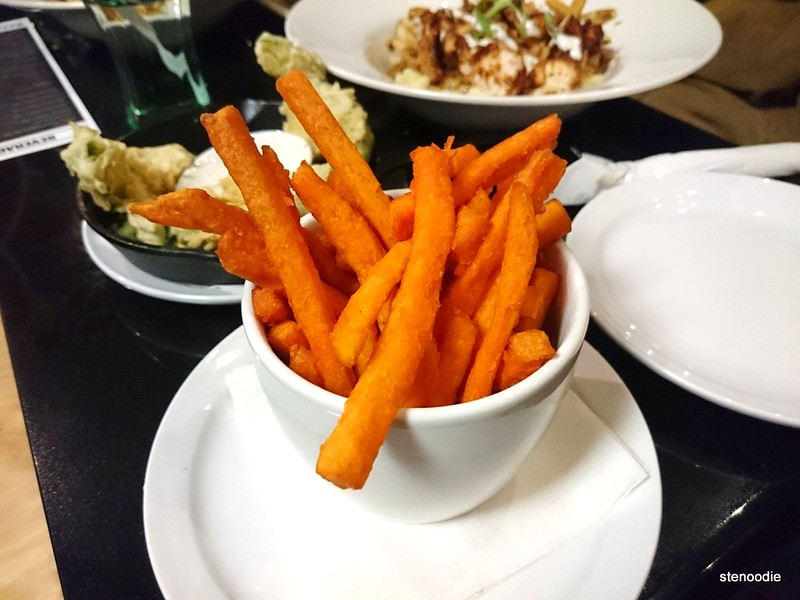 Side of sweet potato fries 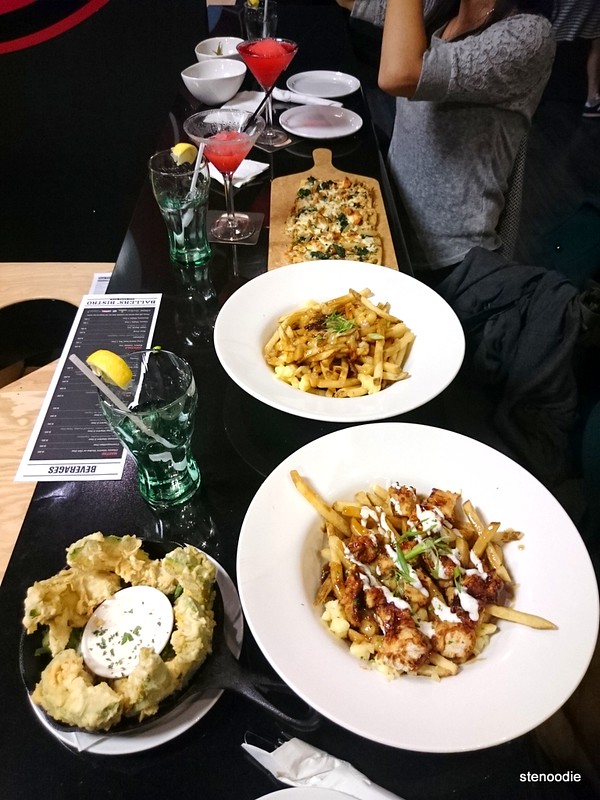 Look at our impressive spread! 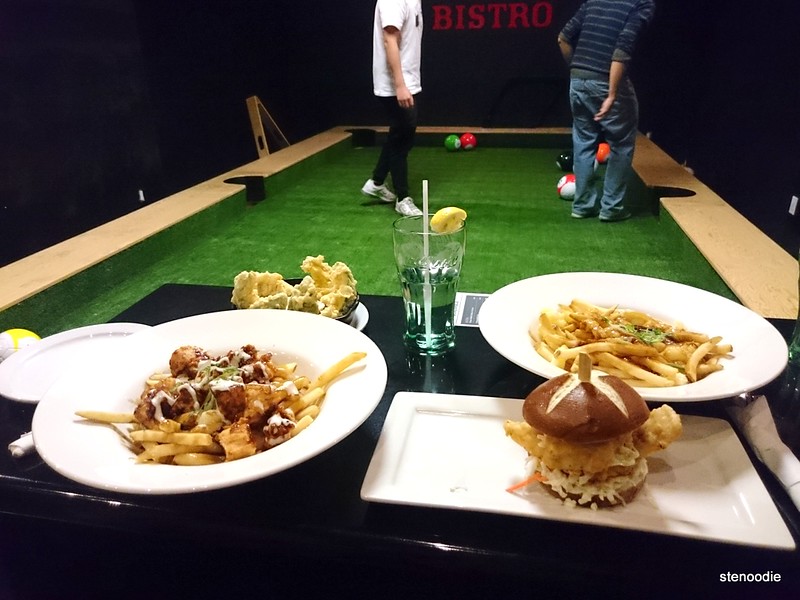 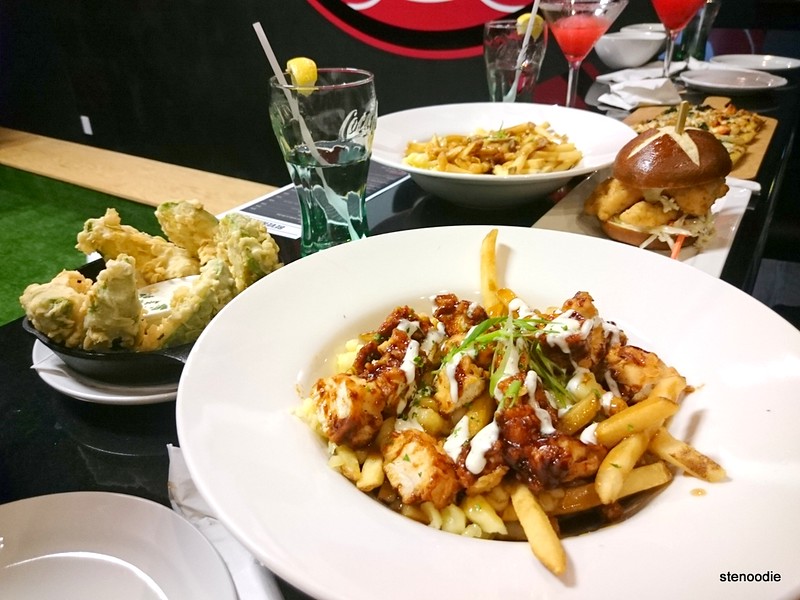 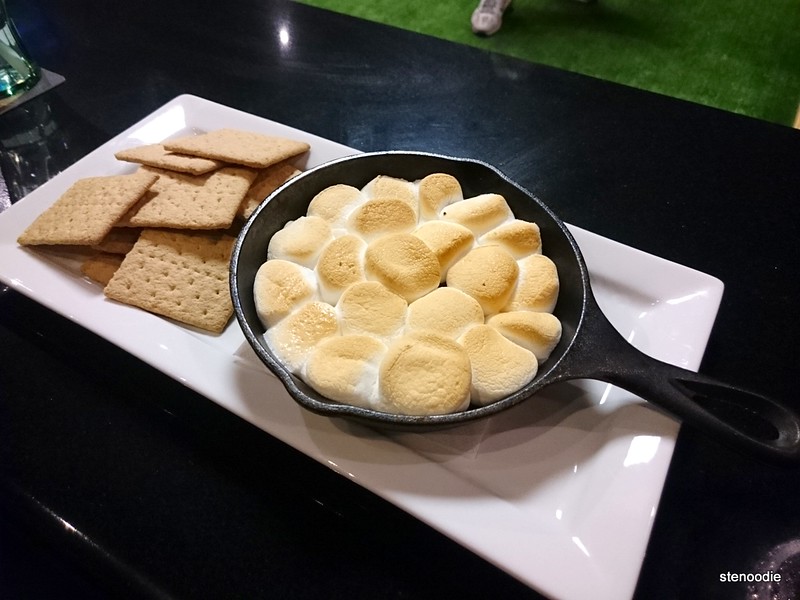 S’Mores Dip. $5.99
-the taste of bonfire served in a skillet

For the three of us to share these many appetizers and mains, it was actually a lot!  However, it’s hard to say no to dessert, so we ordered one to share.  The S’Mores Dip spoke to me so we ordered that.  When it arrived, I was pleasantly surprised to find that I had actually tasted this before!  A friend had made this and brought it to a potluck before.  It’s an amazing dessert that is ingenious and so easy to make. 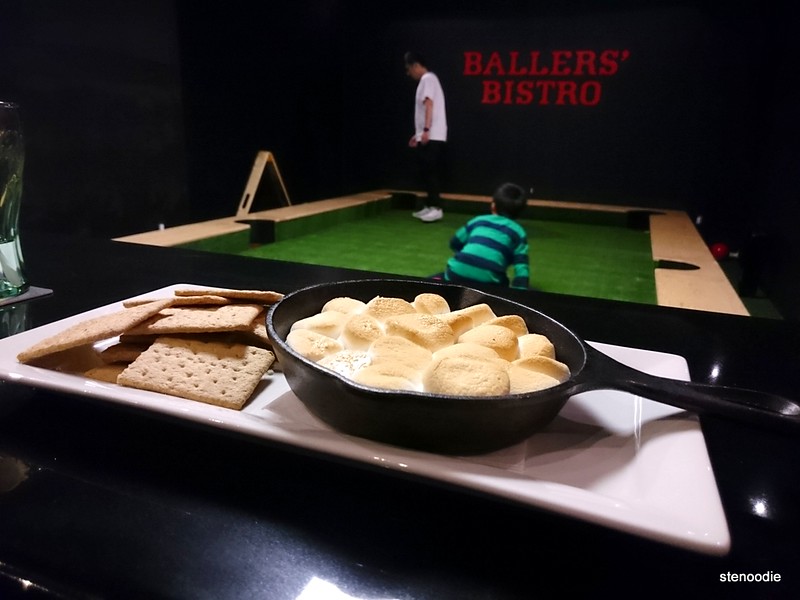 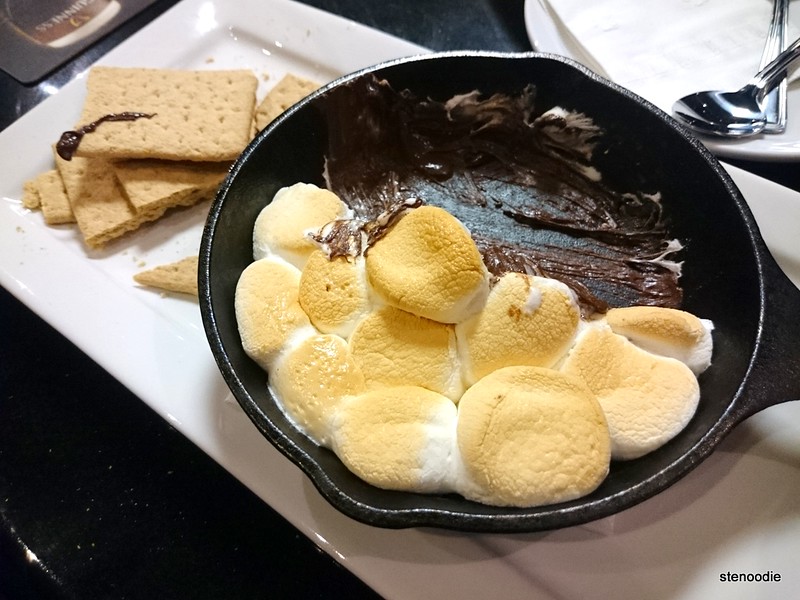 Half demolished. So good!!

The server asked us if we wanted ours with peanut butter and since none of us in the group was allergic, we opted for the PB to the added.  Essentially, you have a layer of marshmallows which are toasted and there is chocolate and peanut butter underneath the skillet.  You take graham crackers and dip it into the skillet to eat.  It’s marvelously delicious! 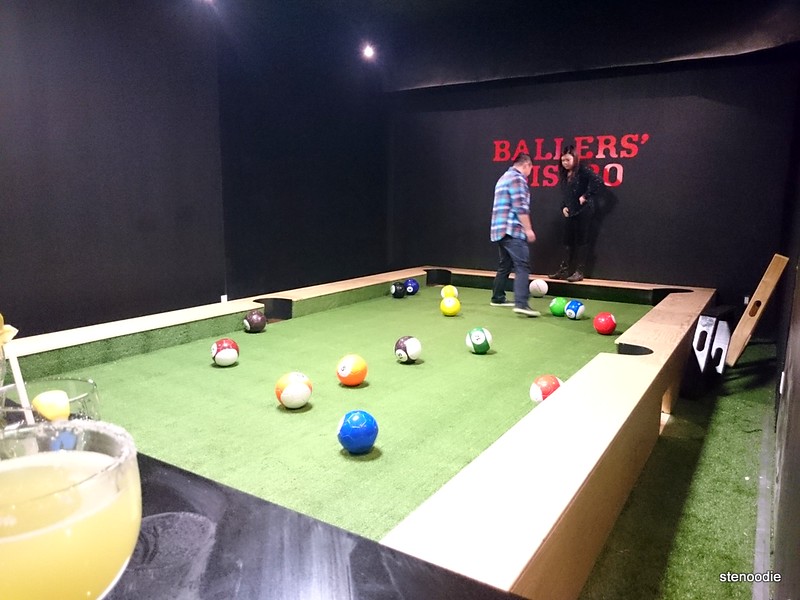 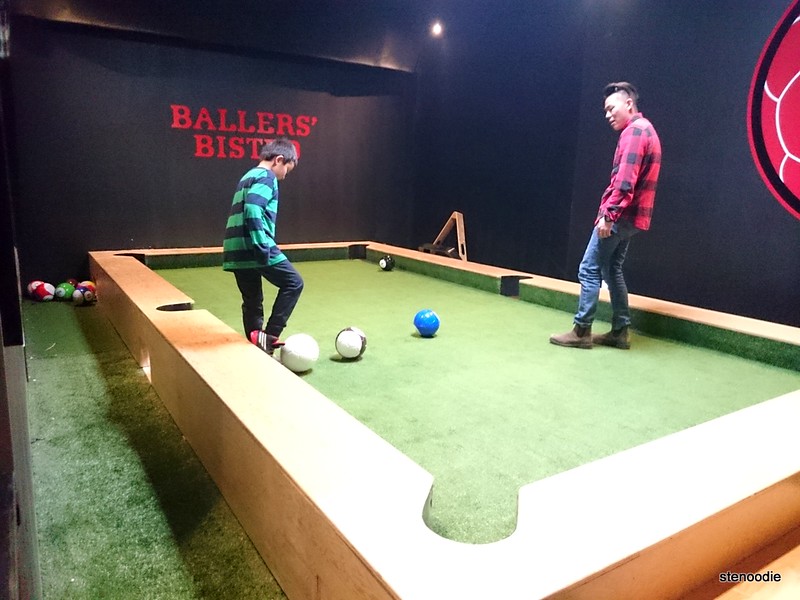 Looks like he is kicking a soccer ball (which he is!) XD 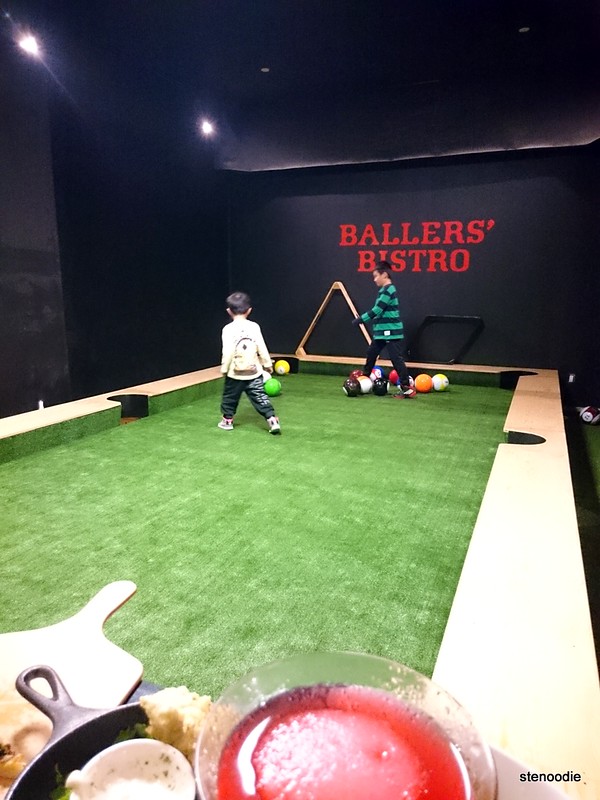 I noticed that this place is not just for adults but perfect for kids too! The kids can play while the adults eat and oversee them. Genius!

I loved my experience at Ballers’ Bistro.  Again, I have to say that I was truly thankful for my friends to bring me to try this great restaurant and entertainment venue.  I think it’s great that not only are they a great entertainment facility but they offer a lot of fantastic food choices too.  It’s the next foodie paradise in Mississauga!  I think Snookball might just be the next thing in Toronto… after archery tag, axe throwing, bubble soccer, etc.  Let’s see how it goes!  Ballers’ Bistro is now officially open as of October 29, 2015.  Go pay them a visit!  You can click on their website to make a reservation!

FTC Disclaimer:  Although my friends reached out and invited me to a complimentary meal care of Baller’s Bistro to showcase their restaurant, the opinions expressed here represent my own and not those of the restaurant.