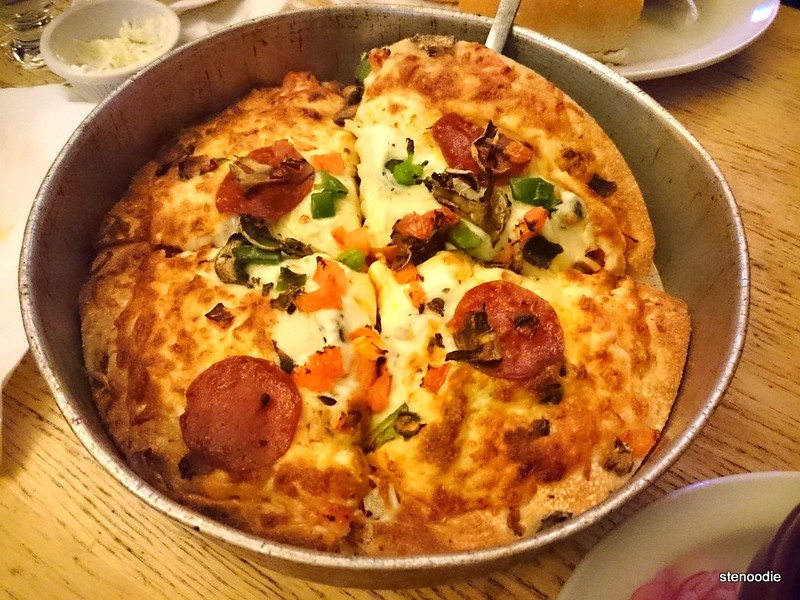 What a pleasure it was to be able to dine in Banff, the world’s most beautiful rocky mountains and the village that is so picturesque!! 😀   Unfortunately, by the time we drove in from Lake Louise (which was actually an hour away), the sun had set and it was really cold outside!  All that was on our minds was dinner before we started another 5-hour drive home to Edmonton (thank you to our friends who drove!).

While looking for parking and where to eat, Juliana found a nearby restaurant called Melissa’s Missteak on her phone.  We found parking coincidentally and the restaurant was only 4 minutes away.  Hurrah!  Even during those 4 minutes of walking from the car to the restaurant, we froze our tushies off but we happily arrived at this local steakhouse for dinner.

Upon informing the hostess of our 7-party group, she informed us that there were no more tables available in their dining room but that we could go upstairs to where their sports bar was and we could still get the full dining menu.  Awesome.  Up the stairs we went.

This sports bar was so nice and big too! It was an entirely different world up here

This restaurant was cool to dine at because our friend’s name was also Melissa!  It made it funny to say that we were dining in “Melissa’s restaurant”.  Also, it’s a pun in itself — “missed steak”. 😛 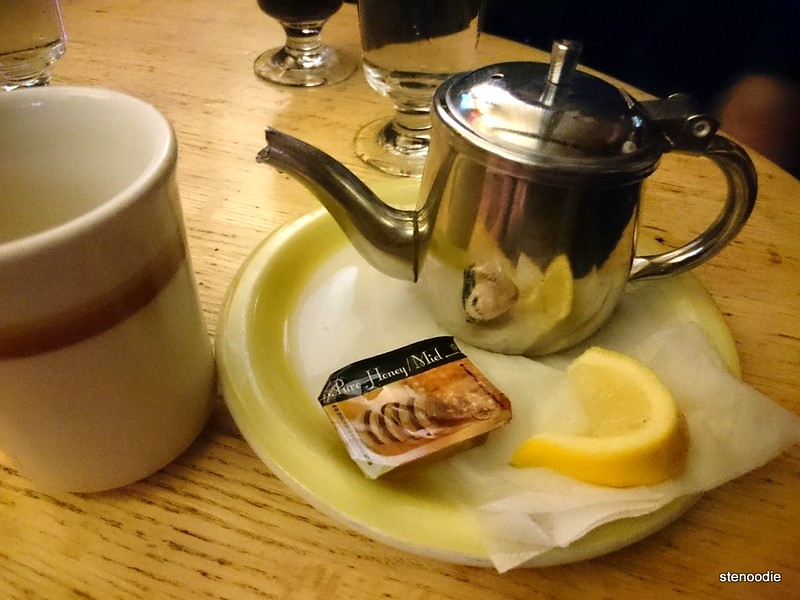 I asked for hot water and lemon. They also gave me some pure honey too! Love that!

The sports bar scene upstairs was really nice and there was a full bar, many TV screens, some dart boards, pool tables, and lots of tables.  Unfortunately, because it was meant to be a bar, our table consisted of joining two smaller round tables together so that we could eat together.  It was a little awkward to sit like that actually since I was in the middle of where the two tables were.

Melissa and I decided to share the Fully Loaded Deep Dish Pizza and Top Sirloin 6 oz AAA steak (due to the restaurant’s namesake, I just had to try out their steaks!).  Yum! 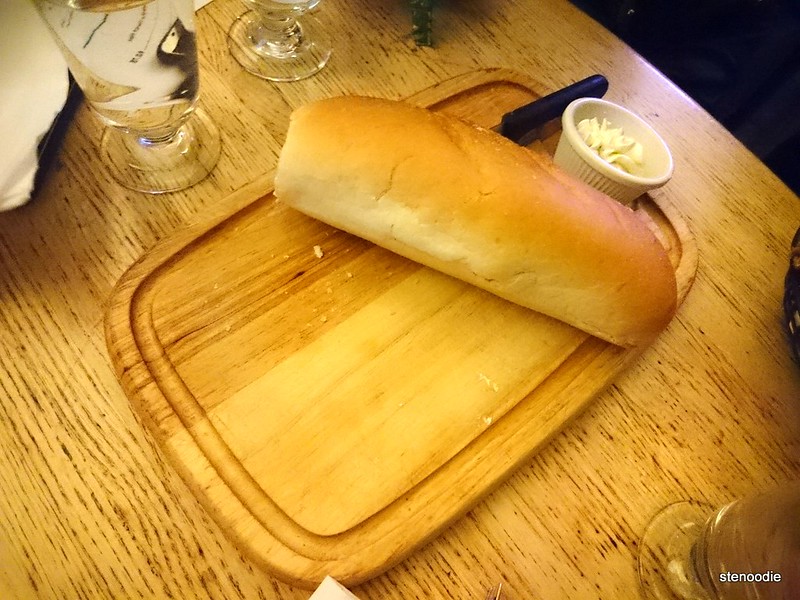 A loaf of bread to slice ourselves and some soft butter

The boys shared some chicken wings.  I tried one and it was actually really, really tasty!! 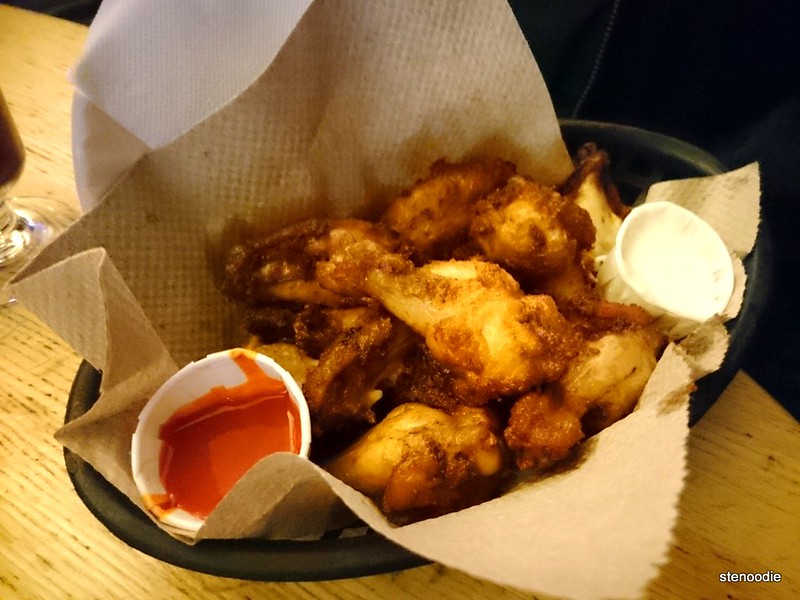 Chicken Wings. $7.95
-“Just right for nibbling” wings with hot sauce on the side 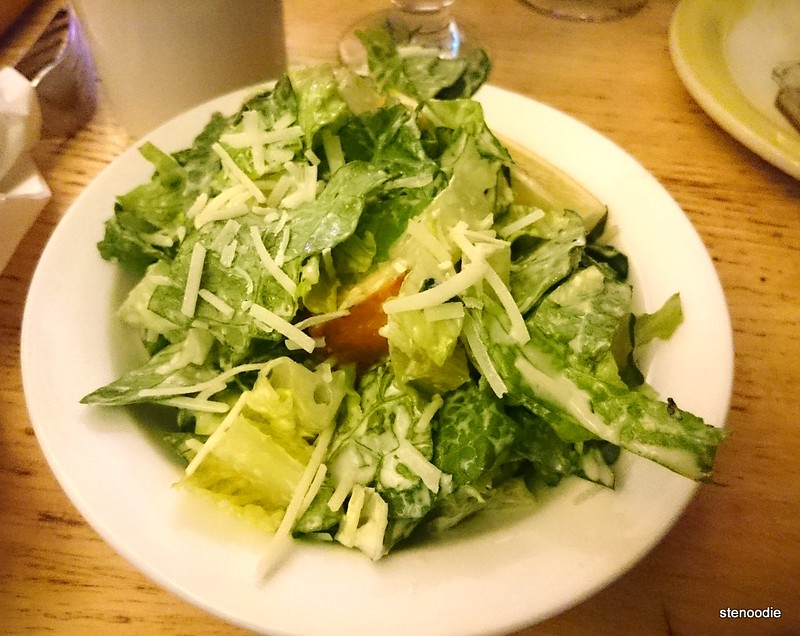 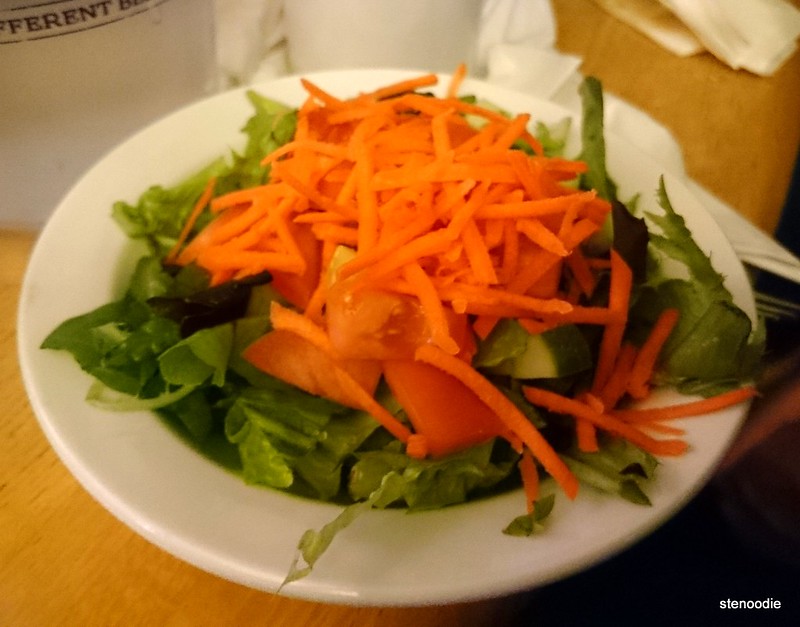 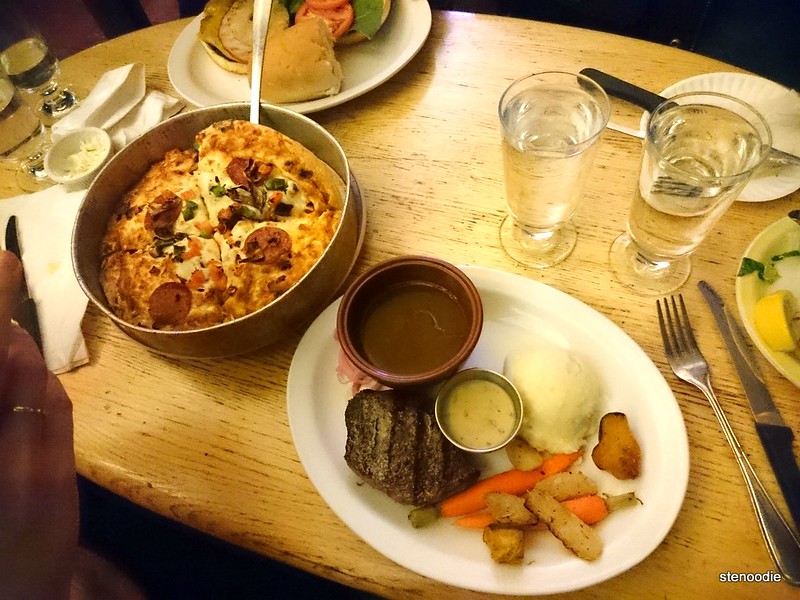 Yum!! A bigger table would have been nice (but I understand that we were at a sports bar and they had an actual dining room downstairs)

The Top Sirloin 6 oz steak came with a garden or Caesar salad; I chose the Caesar salad.  It was really good!  The plate of AAA Alberta steak arrived medium rare (it was quite juicy!), some mashed potatoes, with a really great tasting mushroom sauce and gravy.  It was delicious!  Even the vegetables were scrumptious too! 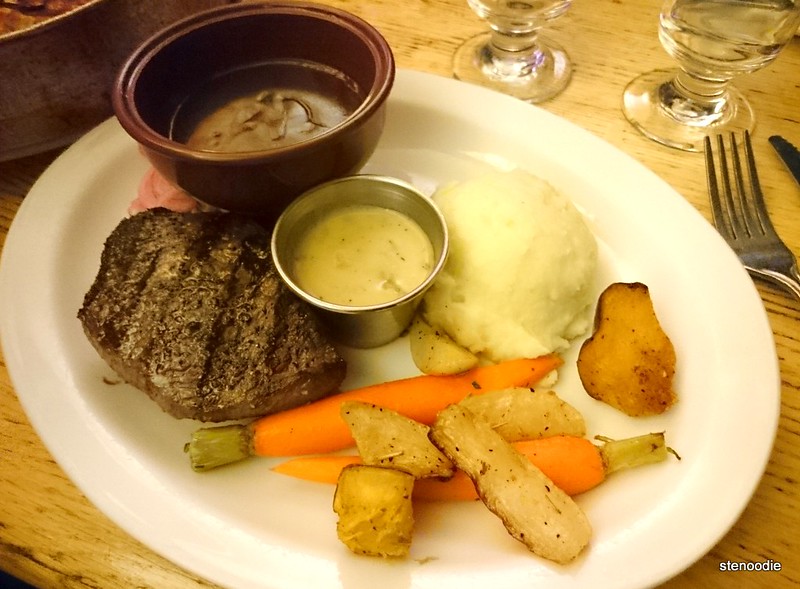 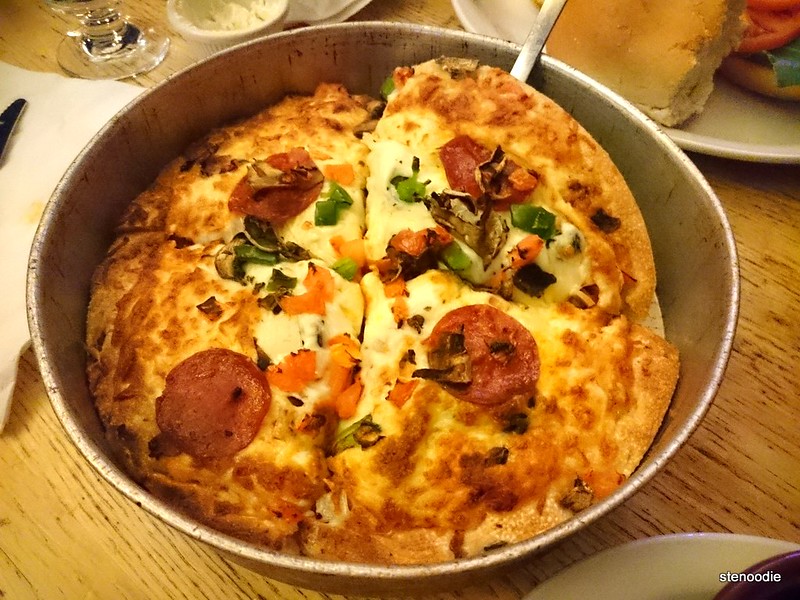 The Fully Loaded Deep Dish Pizza came in a large pan.  This probably would be my second time eating “faux” Chicago deep dish pizza (the first time at the airport during a layover at the Chicago O’Hare International Airport in 2013).  It was so good!  Their pizza dough and sauce are both made from scratch!  The mozzarella cheese was gooey and there were a ton of ingredients on the pizza like Alberta ground beef, pepperoni, bacon, ham, green peppers, olives, mushrooms, and onions.  Yum!  I had to be careful when holding a slice too because if you weren’t careful, some of the toppings might fall off!  Needless to say, both of us girls couldn’t finish the pizza by ourselves though so Christian helped out. 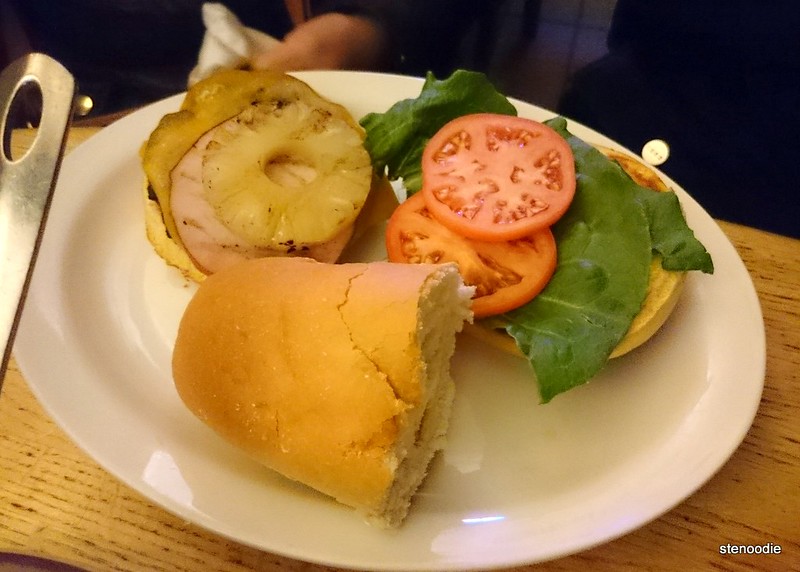 It was a good meal to finish off our trip in Banff before we started the long road trip home.  Melissa and I commented that we still weren’t able to get any dessert the whole time we had been out at restaurants.  We would have been too full for desserts anyway, but it was interesting that we really never had any during our trip.  Maybe next time. 🙂

Have you been to Melissa’s Missteak before?  What was your experience like? 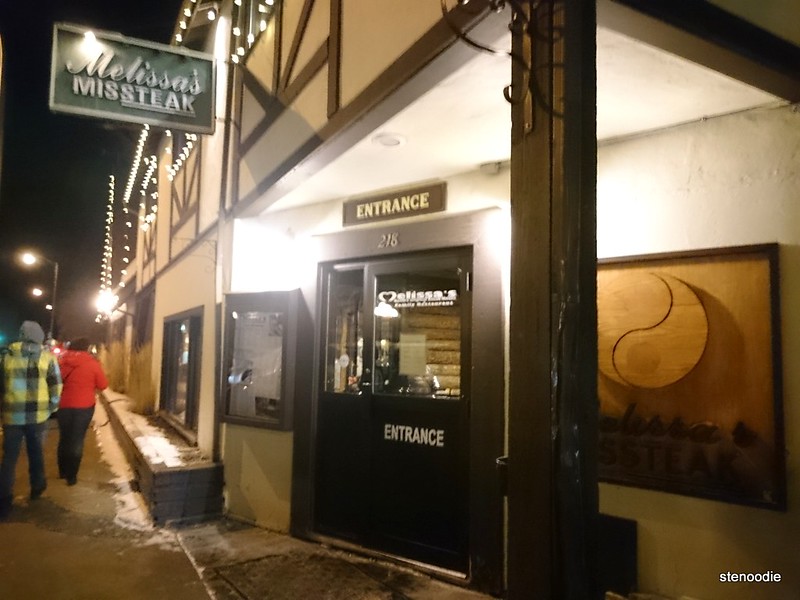 Oh, and service was a little slow as our server didn’t come around as often as we would have liked him to — especially in the beginning when we wanted to get the full dining menus instead of the bar menu.  I can understand that service can’t be exceptional when you’re in a bar environment though.