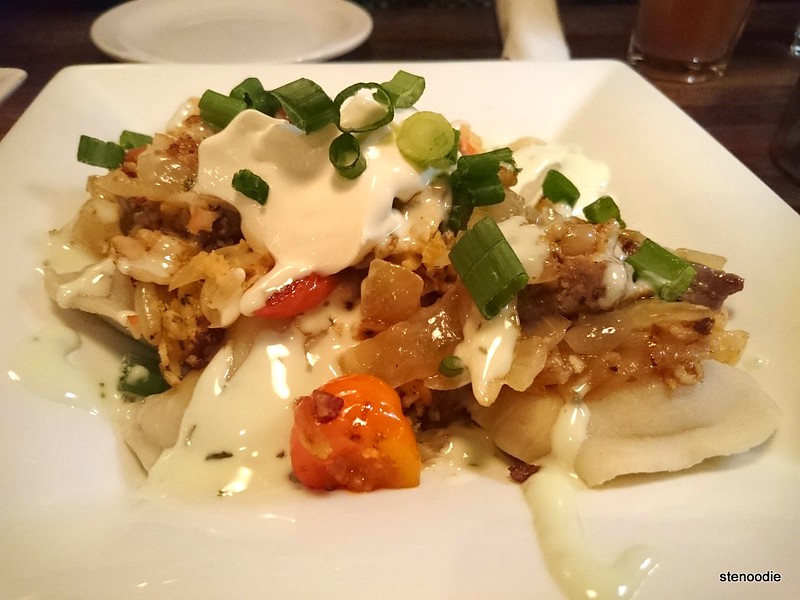 I invited Nicole to try this spot out with me.  We met up on a Saturday night at 6 p.m. at Loaded Pierogi which is located on 9 1/2 Church Street (right across from the Tim Hortons) and next to St. Lawrence Market.  I was there early and when I walked in, I noticed that they are such a trendy and casual spot to have a dinner with a friend or date (they don’t have large tables so large parties aren’t recommended here).  I really liked the decor and vibe of the restaurant. 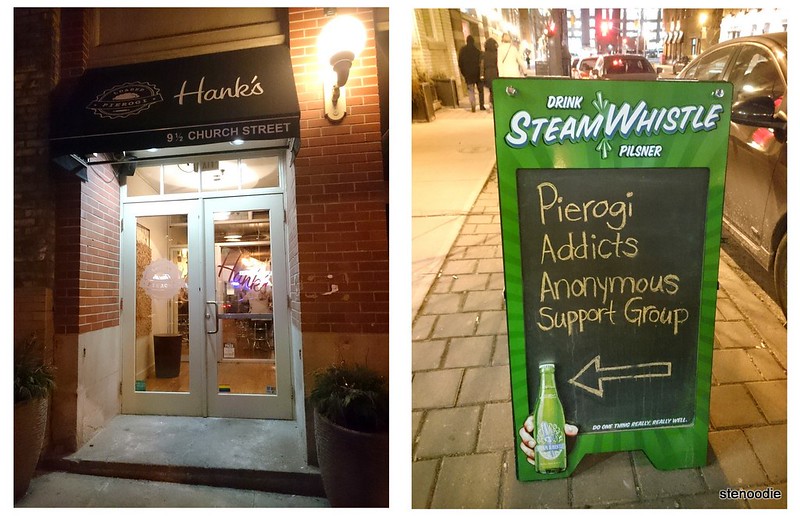 Immediately upon walking in, I was greeted and informed by one of the servers that I could sit anywhere I wanted to.  I spotted the booths to the left and voiced my preference for a booth seating but that they looked to be all full at the moment.  The thoughtful server was able to inform me that if the booths opened up, I could get a seat there.  So nice! 🙂

I loved the vibe in this restaurant!

Coincidentally, when Nicole arrived, that was exactly when a booth opened up.  We were able to switch to that booth and hang our jackets on the convenient hooks as well.  Yay!

We got some water to start and I inquired about the Groupon deal with our server.  He informed me that our deal included drinks that we could choose (under $10).  Nicole chose The Eastern Promises cocktail while I ordered The Mad Dog cocktail. 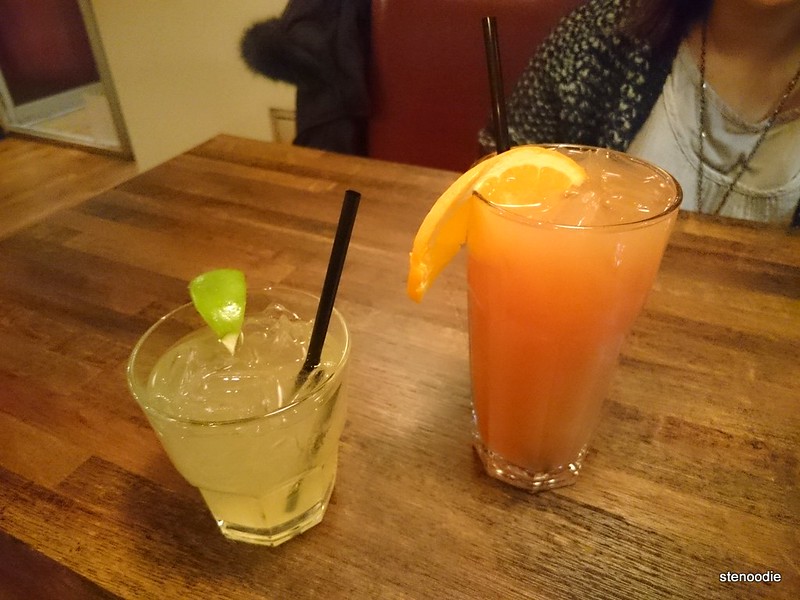 The Eastern Promises cocktail contained vodka, Peach Schnapps, orange juice, and cranberry juice while The Mad Dog contained whiskey, fresh ginger, lemon juice, and simple syrup.  I usually pick chocolatey or sweet cocktails because I like that chocolate taste, but on this visit, I wanted something sour and that would open up my appetite.  The Mad Dog didn’t contain as much ginger and lemon taste as I thought it would; it did have a lemon taste but I wanted more ginger too.

The Eastern Promises was a light sweet drink and it was good from the sip that I tried! 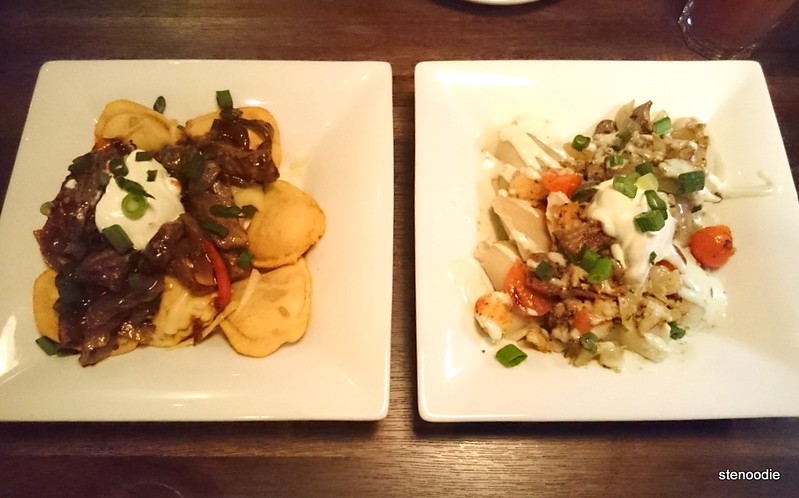 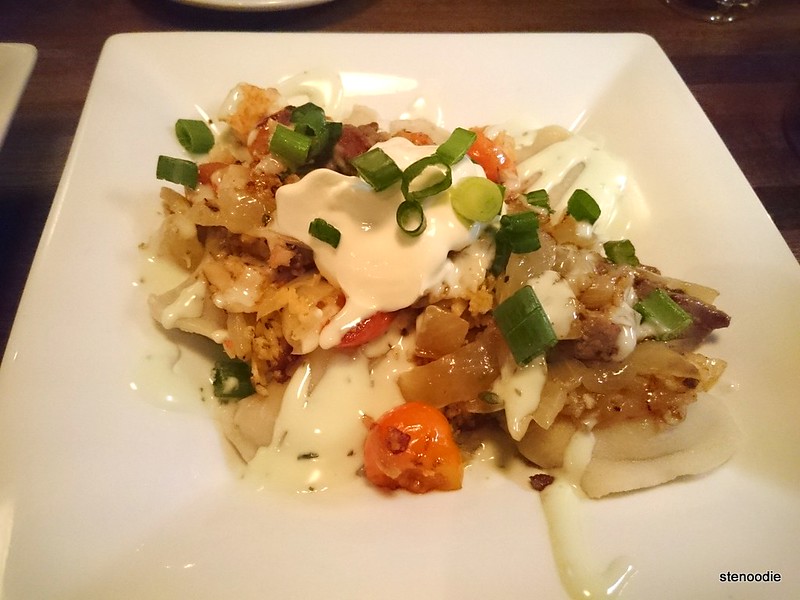 It didn’t take too long for our mains to arrive.  The Groupon deal included drinks, two mains, and one dessert to share.  We chose the BBQ Philly Cheese Steak and Loaded Surf & Turf pierogis.  It was my mistake to assume that the pierogis would actually have these toppings inside of them!  Actually, the pierogis were served either classic (crispy) or boiled.  The BBQ Philly Cheese Steak had the classic pierogis while the Loaded Surf & Turf had the boiled pierogis.  When it arrived, the toppings were simply on top of the pile of pierogis.  It made for some good food photographs! 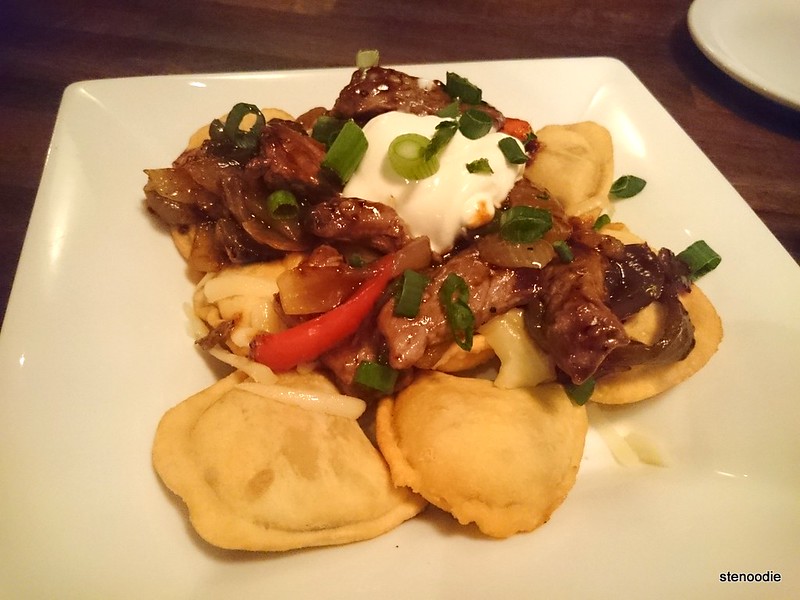 I ended up enjoying the boiled pierogis more than the classic types.  A pierogi is a classic Eastern European food that resembles a dumpling.  It is “made by wrapping pockets of unleavened dough around a savory or sweet filling and cooking in boiling water” and may be served with toppings.

I really liked the BBQ Philly Cheese Steak sauce but I also enjoyed the simplicity of the surf & turf.  The steak was sliced and I enjoyed the pieces of crab that were in the pile of pierogis.  I thought we would get full really fast considering there were a lot of carbs on the table, but we managed to finish all of this and still have comfortable room in our stomachs for dessert! 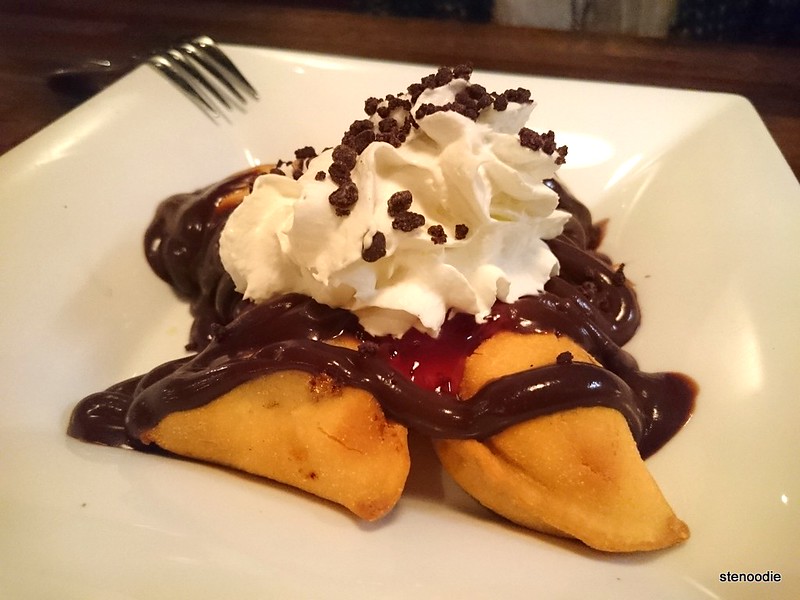 Dessert is also comprised of pierogis!  They have two types of dessert at Loaded Pierogi; they have Sweet Apple & Caramel Pierogi and Strawberry & Chocolate Pierogi.  We chose the latter one.

This one was fairly interesting because the Strawberry & Chocolate Pierogi were stuffed sweet cheese pierogis with strawberry compote, chocolate sauce, whipped cream, and chocolate crumble.  It tasted a little unorthodox at first because the sweet cheese that was stuffed into the pierogis seemed like an acquired taste.  It was sweet and savory.  I found that if I dipped more chocolate into it, it didn’t taste as funny.  Some of the sweet cheese tasted like cheese curds too.  It wasn’t the most amazing dessert, but still really good to try. 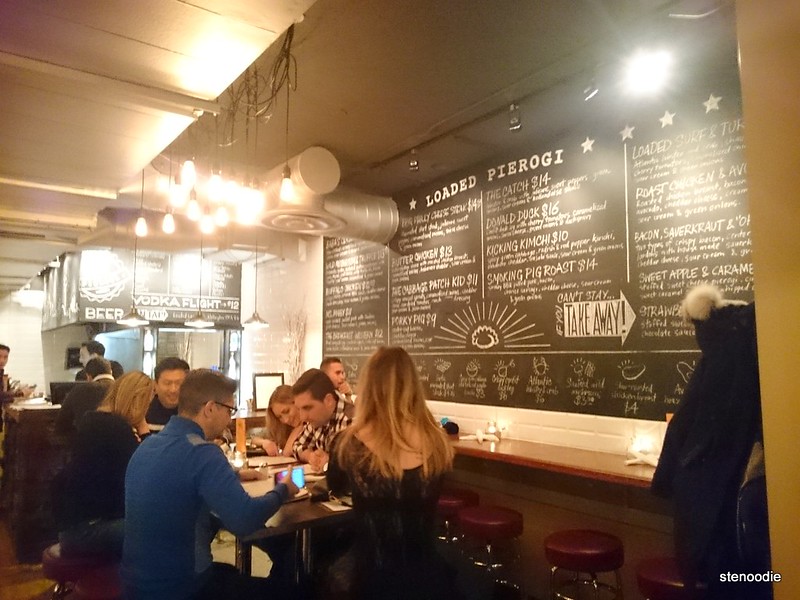 They are also popular for their vodka flights. And like their big wall that also acts as their menu

I really enjoyed the night; the atmosphere was relaxing and casual for a quiet dine-in.  I was impressed that they had a lot of customers too; there was an influx of guests during the entire night that we were there.  I really appreciated the kindness and calm demeanor of our server too.  He made the night very enjoyable and pleasant.  In addition to us using a Groupon, he took care of it perfectly and without hassle.  Much appreciated!

Have you been to Loaded Pierogi before?  What was your experience like?