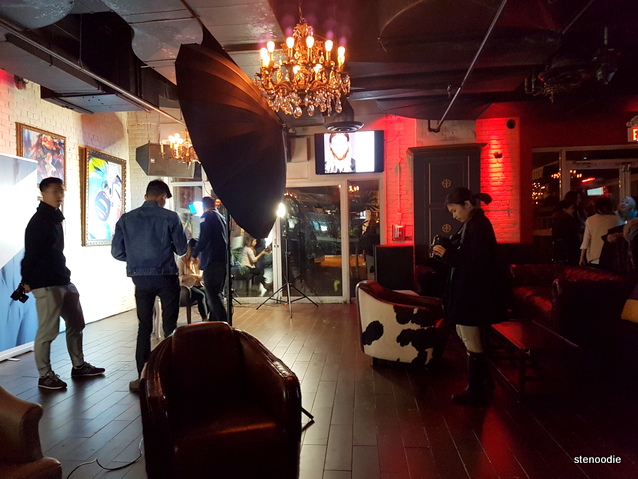 A couple of weeks ago, I received an e-mail from a representative from Media Nexus Network about an “Influencer Photography & Networking Event” (later branded as a “Networking & Photography Workshop” in a subsequent follow-up e-mail).  Within the e-mail, the representative described that this was an event where photography workshops would be set up for bloggers to create content, share ideas, and collaborate on site.

Just for reference, I’ve copied and pasted below what the e-mail body said:

I was actually really intrigued and curious about this and RSVPed a spot for myself right away.  I love learning and I want to learn how to take better photos, so what more could I ask for with an apparent photography workshop and learning from others?  I was quite excited!

The bottom part of the e-mail also encouraged us to bring as many blogger friends as we could so that the blogger who brought the most blogger friends could “win a complimentary makeover session with make-up sensation Myles Sexton and a Lancôme gift basket!”  This should have tipped me off about what the event actually was about… 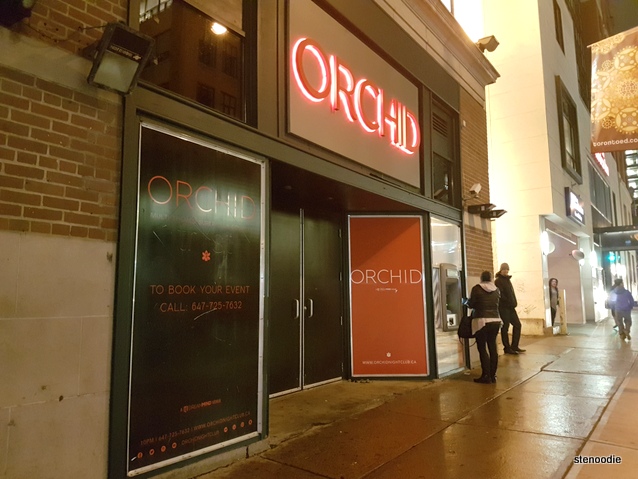 After a quick dinner at Ebisu, Anh and I (I’m so glad I brought a friend!) headed to Orchid nightclub (Moscow Tea Room) where the event would be taking place.  Again, the location of the “workshop” also should have tipped me off about what this event was really supposed to be about, but I guess I am naive.

Upon looking for the Orchid nightclub entrance, there was a man standing off to the side of the entrance waving us over.  He told us that the event was just behind the black curtains behind him.  Um, okay. 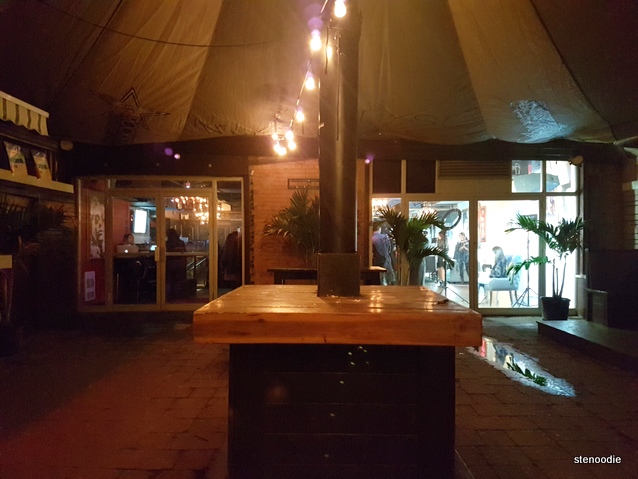 After you peel back the black curtains, this was the entrance to the Moscow Tea Room

We got to the door of the venue where this supposed workshop/event was going to take place.  Upon opening the door, I felt it was incredibly seedy there.  It was obviously a nightclub, with the female staff dressed up to the nines in heavy make-up and skimpy clothes, and the venue was very dim with barely little light.  Um, how is this supposed to be a “photography workshop”?!?

We signed in at the front where we left our phone numbers (why was this necessary really?), got a name tag, a drink ticket (okay…), and checked our coats at the coat check.

Since we arrived right at 7 p.m. when the event was supposed to start, we were early and there were very little people here.  The Moscow Tea Room was a lounge with a bar and there were various light fixtures and tripods set up around the room where people were holding cameras and fiddling with their equipment. 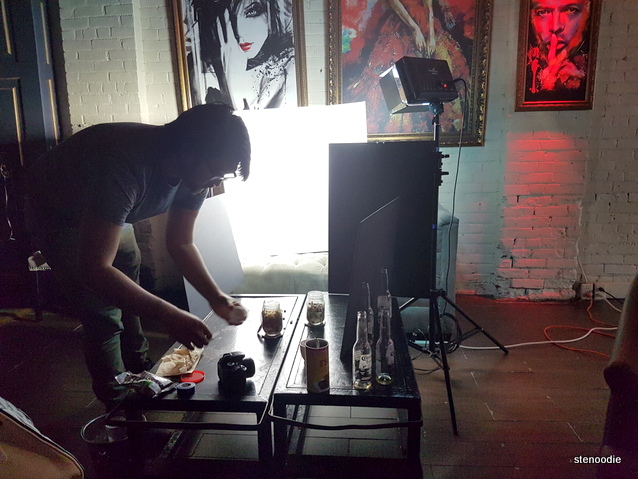 This was the only setup in the entire space that seemed remotely “photobooth”-friendly.. But even then how do you capture any good photos in such terrible lighting?!

I didn’t feel comfortable at all.  Again, I instantly knew that there was no “photography workshop” that was going to happen that night.  It was a full-on networking event and I felt jipped that I had been invited to something that was falsely advertised and promoted. 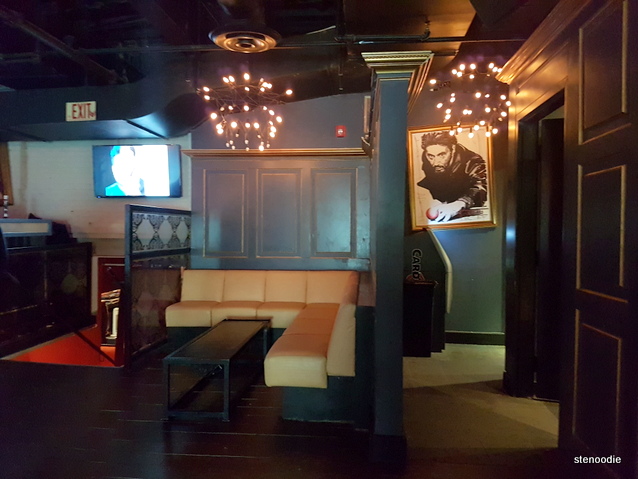 Anh and I sat on one of the couches and chatted for a bit before I knew I didn’t want to waste my time here.  I wasn’t here to network… I was here to learn about photography and learn from other photographers and/or bloggers… I really envisioned something like a classroom where everyone would be sitting in a chair and a guest speaker would be teaching about photography.  I was totally wrong about that!

Just before I was about to leave, I spotted two blogger friends and said hi.  At this time, the two hosts of the night also gave a VERY short spiel to the crowd on what their event was about and that if we wanted to learn more about Media Nexus Network, we could just look at the flashing slideshow on the TV screens (…).  Thus, the entirety of the night was devoted to mingling and networking.  There were many make-up, fashion, lifestyle bloggers in the house that night. 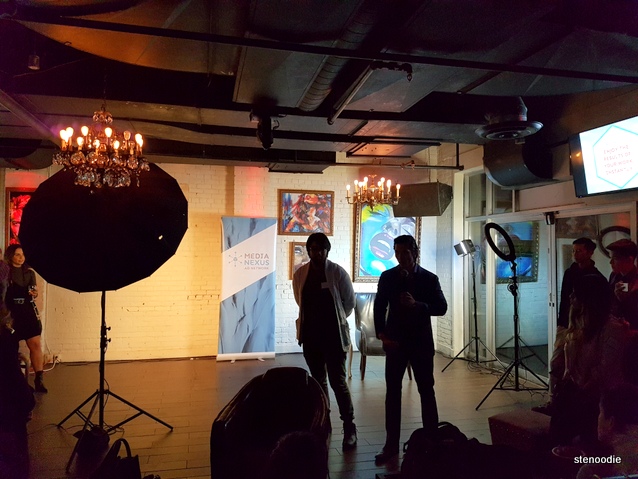 Hosts of the night speaking…

They say life is what you make it, and I am absolutely sure that many of the bloggers present that night had an amazing time networking and mingling (if they like that kind of thing).  However, when the e-mail of an invitation informed that there were going to be “photography workshops“, I really envisioned a place where there is supposed to be somewhat of a formal education on the topic at hand.  (To quote The Free Dictionary, a workshop is defined as an “educational seminar or series of meetings emphasizing interaction and exchange of information among a usually small number of participants: a creative writing workshop.)  Sure, there were a lot of individuals there all ‘talking’ about something and learning from each other, but it was basically a freestyle networking and mingling event.

If I had known right away that this was what it was, I wouldn’t have spent my time commuting all the way downtown to attend this so-called workshop.  I was most irritated that I was led to attend this event thinking it was something that it was not.  Time wasted is something you can’t get back and I already have enough on my plate as it is already to not spend my precious time on something like this…

In any case, this is another experience for the books — not a good one — and now I’ll know in the future that if there are any other events disguised as “photography workshops” where there is a media company involved, it might not be what I think it is.  In the future, I’ll ask explicitly in the e-mail to know what exactly we will be doing before I sign up first.  I’m glad at least that I came downtown for dinner with Anh, otherwise the entire night would have been a complete write-off.  Long story short:  My time is incredibly valuable! Don’t waste it by perpetrating that you have something noteworthy to offer when you really just want to advertise your media company.

Anyway, if you are reading this and you were there at the event, share with me your experience.  It could have been a very positive one where you met fellow bloggers that you have always wanted to meet or gained a lot of insight about the blogging industry from other bloggers and completely disagree with my point of view.  Either way, everyone’s experience is different and this was my experience, all written up for you to read.  Thanks for reading! 🙂

(Also, when the representative of Media Nexus Network e-mailed me earlier today to follow up and inquire about feedback for their event, you can bet that I wrote to her about I think here in this post.  I also informed her this will be blogged because I blog about my experiences.  [I said to her:  I am open to discussion and not trying to bash the event; I just didn’t think it was promoted correctly.]  In essence, this should really have been advertised as a “mingling networking party where there will be a few random photoshoot-ish props for you to take photos in”; NOT a workshop by any means.)