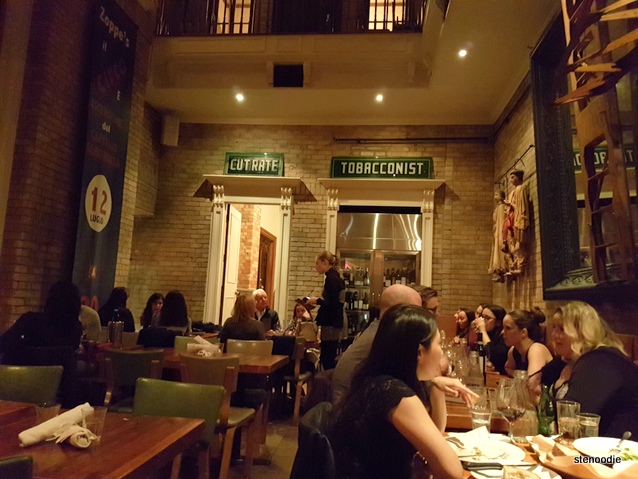 Terroni at Adelaide located at 57 Adelaide Street East in Toronto

I’ve heard so much about Terroni but had never been to any location of theirs before to try a single Italian dish.  Thus, I was very grateful to be able to get to try it finally!  We went to Terroni at Adelaide on a Friday night — they have two other locations; one at Queen and one at Yonge at Price.

Terroni at Adelaide is located at 57 Adelaide Street East and housed inside the historic York County Court House, which served as the city court from 1852 to 1900.  How neat!  The entrance is little tucked into the flat brick walls of the court house when you walk down the street, making it a little hard to spot but its big black banner can point you to where it is if you are looking for it. 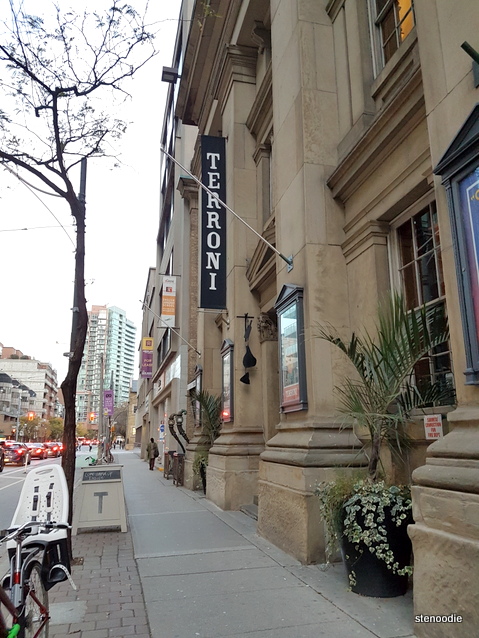 Terroni serves southern Italian food and the restaurant was very packed with patrons here on a Friday evening.  I’m so glad that we had made a reservation and got a table! 🙂 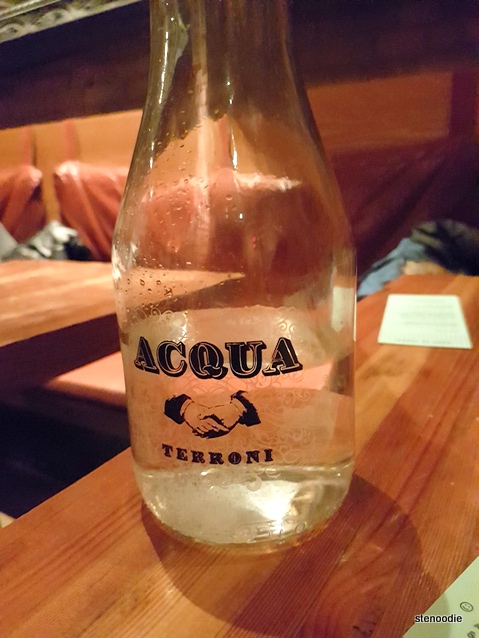 We came here to try their pizzas, so pizza ordering we did!  Before that though, we also ordered an appetizer to share. 🙂  (Their pizza menu was quite extensive and there were so many different combination of toppings you can choose from.) 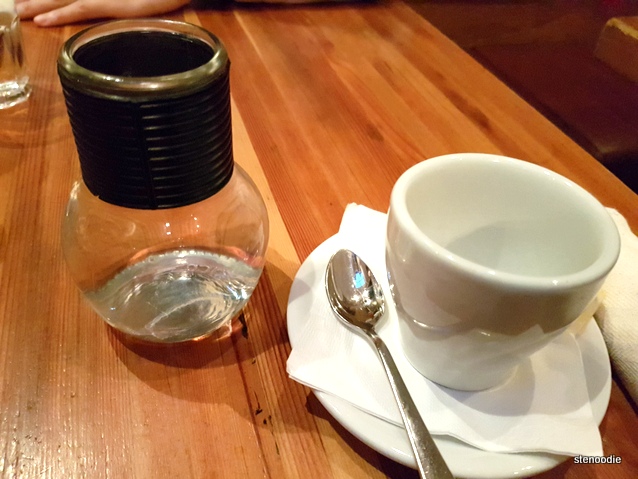 Hot water in a light bulb container to retain heat

I liked how my hot water was served in a light bulb container.  It reminded me of the first time I saw this at The Junction Kitchen & Bar — you would think that a simple change of container would help to retain the heat of the hot water, but it certainly does!  It looks so cool too. 😀

We received some bread and olive oil to start.  The olive oil was light and not too dense. 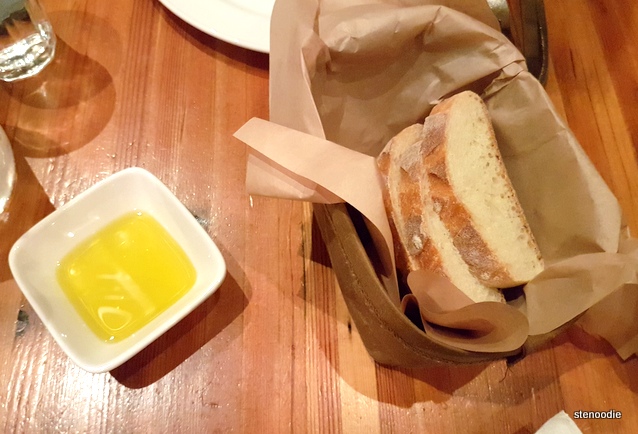 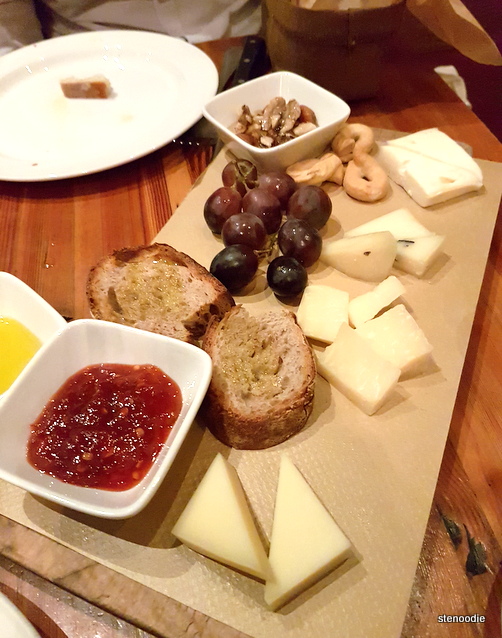 Our Tagliere di Formaggi cheese board arrived and it looked so good!  The food runner did a good job at naming each of the four cheeses that were on the board but I only remembered the Asiago one — I know, food blogger fail haha.  The four Italian cheeses were served with honey and homemade jam.  There was some fresh grapes (tasted so juicy and sweet) on the table as well as crostini and pretzels.

It was fun to try out each of the four cheeses and I found that I liked the creamy one the most; it was so cheesy!  The other three cheeses were actually really good too.  The hard cheese closest to me was probably the least memorable; the middle two (Asiago and something else) were moderately soft and had a strong cheese flavour to them.  (Lol, sorry, I don’t remember the names.)  I liked eating them on their own too without bread.

I also enjoyed the homemade jam, which was a little spicy but really tasty, and the honeyed walnuts.  I don’t even like walnuts usually but the sweet honey really made the crisp walnuts taste so good.

Before long, our pizzas arrived.  I liked how the server was cognizant that we weren’t done our cheese board yet and didn’t bring our pizzas out until it was absolutely necessary — we spent a lot of time chatting and savouring the cheese board. 😀 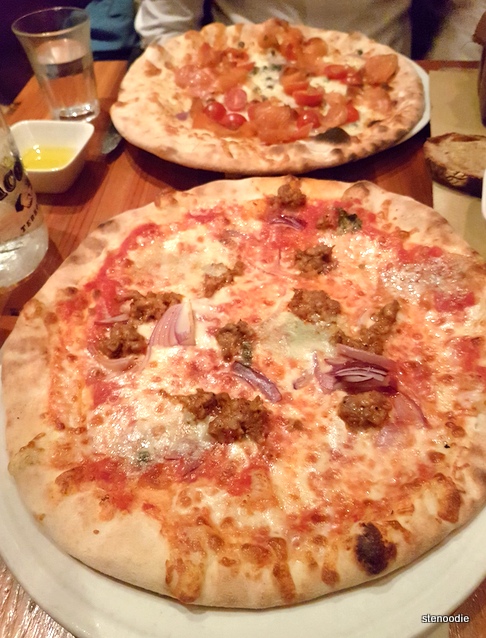 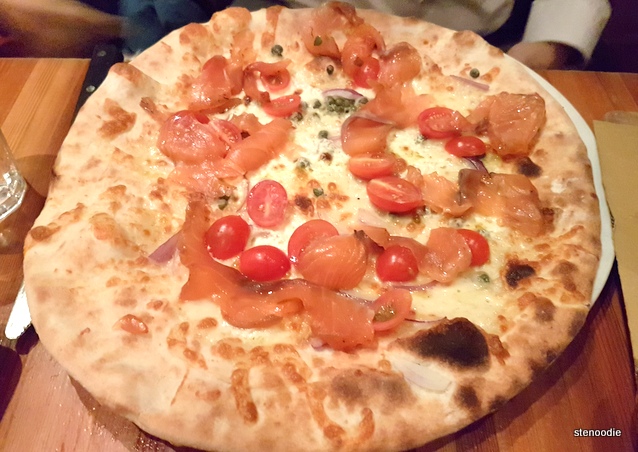 We ordered a white pizza and a saucy tomato pizza for flavour.  The Al Salmone was a white pizza with in-house smoked salmon, Italian cream, mozzarella, capers, red onions, and fresh tomatoes.  The Smendozzata had tomato, mozzarella, homemade spicy sausage, gorgonzola, and red onions on it.

Both pizzas had a very thin crust and were largely portioned!  I was so excited to try it. 😀

The smoked salmon on the Al Salmone wasn’t evenly distributed so sometimes when cutting up the pizza, you might get a slice that didn’t have any smoked salmon on it.  Otherwise, I liked the freshness of the smoked salmon and thought it was really high quality.  If I were to ever eat another smoked salmon pizza that was this good, I think I would be fine with it, haha. 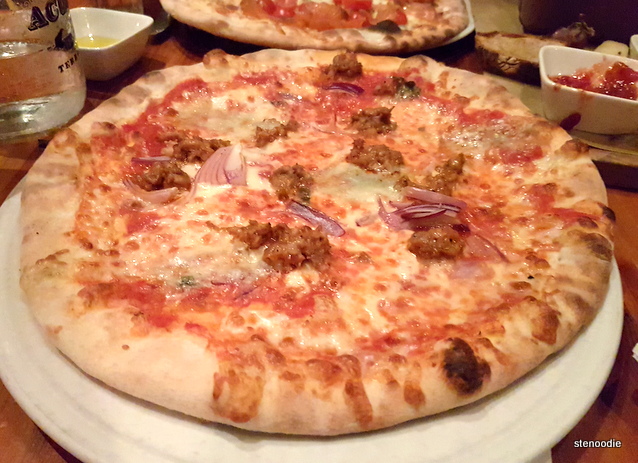 The Smendozzata (how do you even pronounce this XD) was a meaty pizza and fit for meat lovers.  I liked the homemade spicy sausage on it as well as the tomato sauce.  Compared to the Al Salmone, this one was more juicy and saucy thanks to the tomato sauce.  (I think there also could have been even more homemade spicy sausage on it; looking at the photo now makes it look like there wasn’t enough scattered on there. XD)

It was really hard to narrow down one pizza to like more; each one had its own merits.  (The guy sitting at the table next to us actually asked me how the Smendozzata tasted since it looked so good; I hadn’t tried it yet at that point so he ordered it for himself to try.) 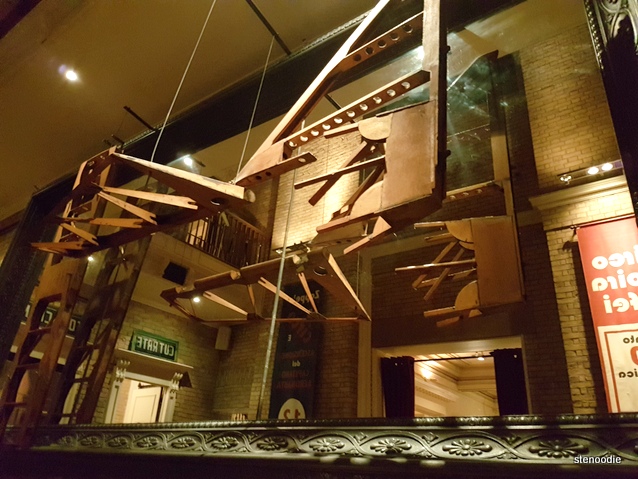 I liked the old-style decor of the place. But I wasn’t sure what this thing hanging up was

I appreciate how the server didn’t kick us out of the restaurant even though we stayed way than our 8 p.m. agreed time to return the table. XD  There were a lot of people there that night and it was a little loud at times.  I liked that the restaurant was situated in a old court house though; there aren’t many restaurants in Toronto where you get to dine in a place like this.  Also, their atrium had a little bit of flair with an ancient-looking clock that looked like the train station in New York City!  It was really neat and the entire restaurant definitely had its own character (even the bathrooms were fancy).

Next time, I will want to try the pasta dishes from Terroni! 🙂

6 Responses to Terroni at Adelaide