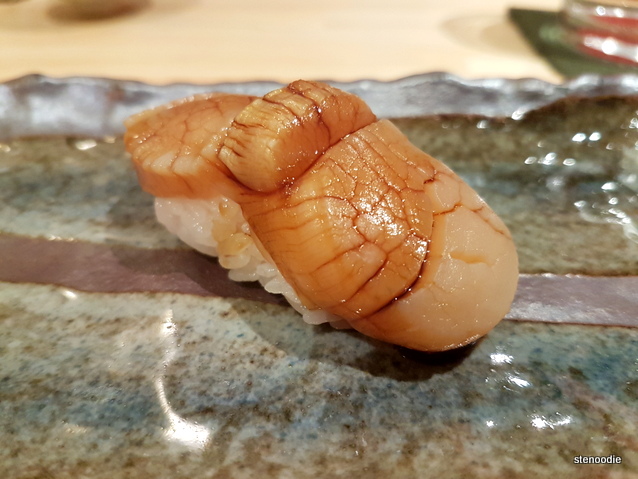 I haven’t tried many Japanese omakase meals in Toronto so it was definitely a treat to be able to enjoy this chef-custom-chosen “I’ll leave it to you” meal at Shoushin for Valentine’s Day this year.  I have to thank my SO for making the reservation ahead of time since V Day is always a hectic day for restaurant bookings.

We arrived a little before 8 p.m. and we were greeted warmly by the staff.  The lady at the front bowed very deeply upon welcoming us.  After we told her the reservation name, she took our coats and then we were led to our table near the back of the restaurant.  Unfortunately, we weren’t able to get a table at the hinoki sushi bar where the sushi chefs could be seen making the sushi right in front of you but we still had a private and intimate dinner where we sat.  The interior was very modern yet still contained elements of tranquility and peacefulness. 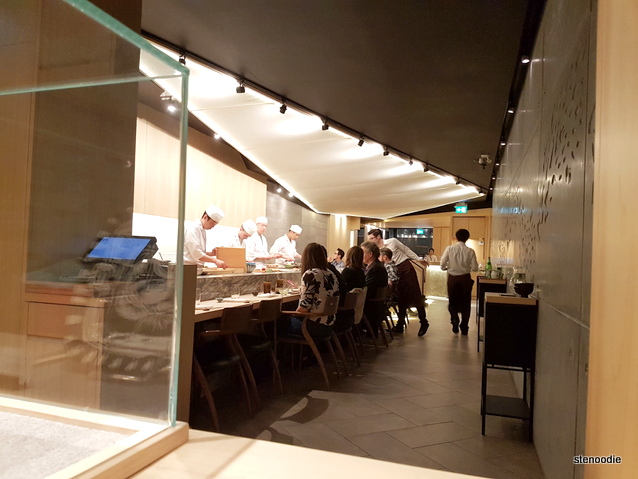 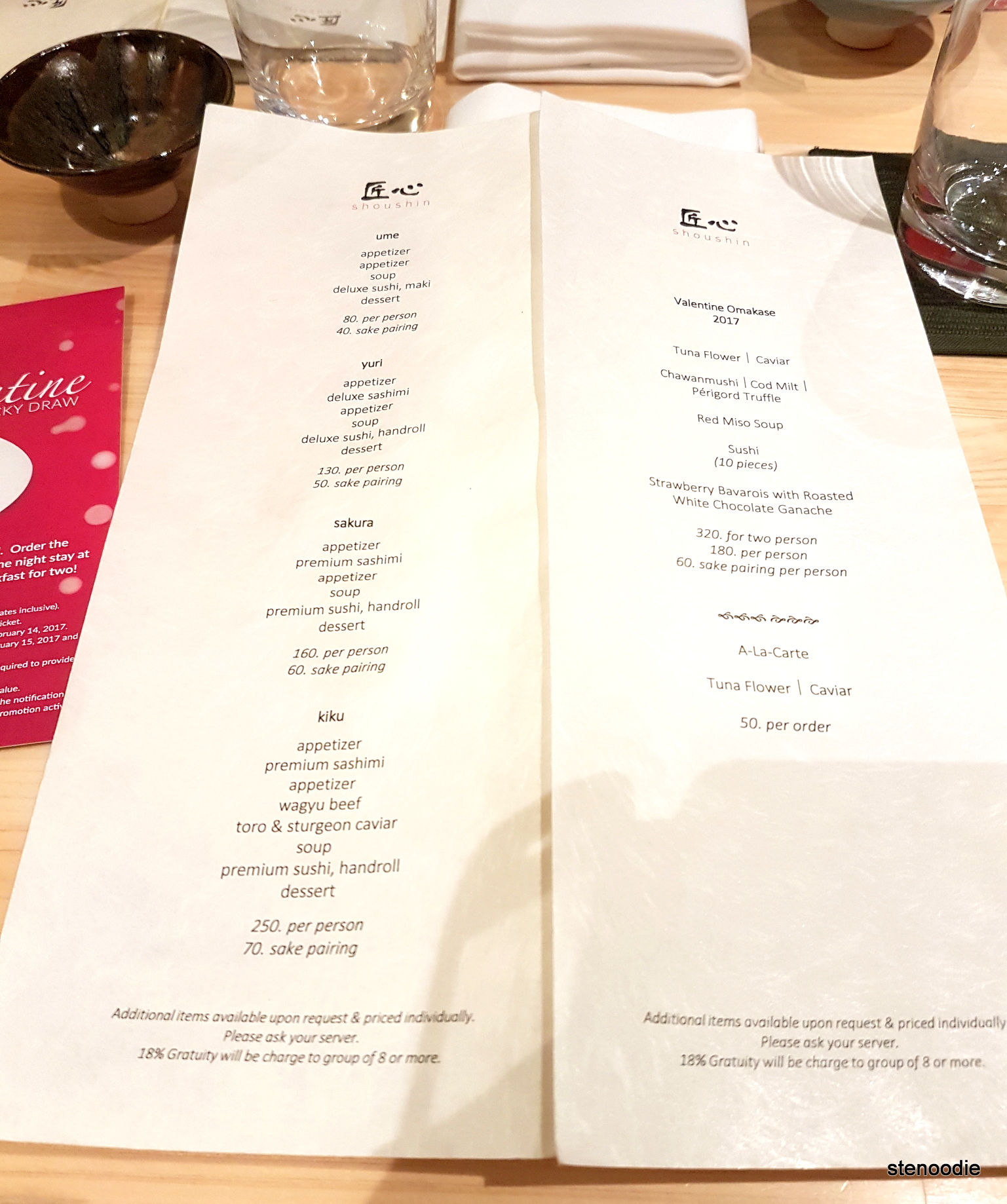 We chose the Ume Omakase for our first time here at Shoushin which was like a introductory omakase menu for the restaurant.  Shoushin also offered three other omakase menus for those who want to try sashimi, wagyu beef, caviar, and other even more delicate offerings.  Those would be good for future visits and for those who like to splurge a lot on a single meal!  During this time of the year, they also offered a Valentine’s Day omakase for two which might cost some patrons an arm and a foot.  I’m glad we stuck with the Ume Omakase. XD  We also had the sake pairing too! 🙂  Shoushin serves Tokyo-style sushi where the fish is flown in fresh so don’t expect to see the same menu day-to-day here or even week-to-week.

The service that night was excellent and our server was very patient and professional when serving us.  He explained every dish thoroughly but in the moment, I really couldn’t remember most of what each ingredients were in the items.  Thus, this blog will focus on my tastes and what I liked or disliked.  I can’t recall every single item we had — if I recorded the evening, then yes. 😛 (I’m not a professional food describer; I’m a professional eater. 😛 )

We started off with our first sake pairing of the night with our appetizers.  This was a light citrusy taste that actually went really went with the first appetizer which were fried scallops with some cashews, spinach, and seaweed.  This was a very delicate appetizer.  I liked the scallop.  I believe this was flown in from Hokkaido, Japan! 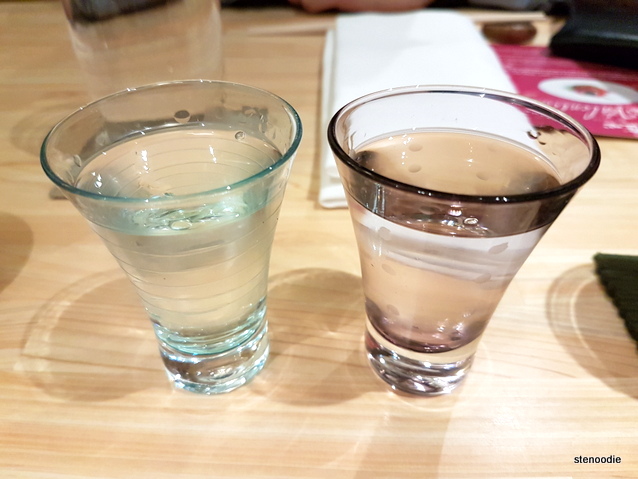 First sake pairing of the night 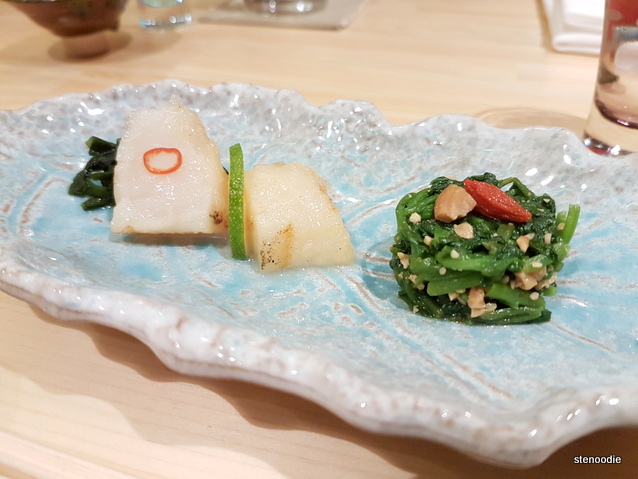 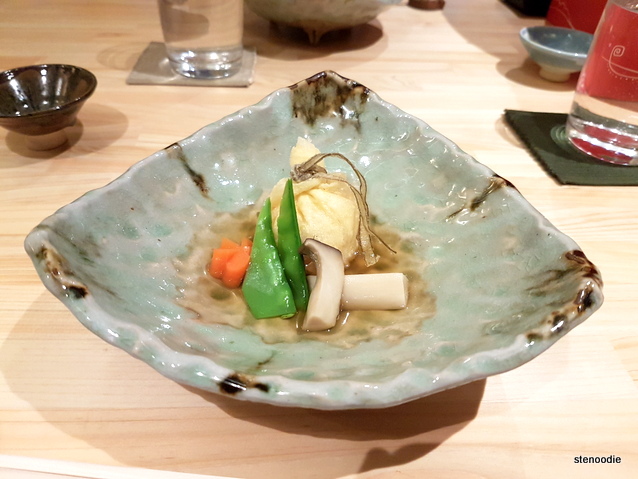 The second appetizer was a little dumpling made with soy milk skin with a piece of lobster inside and actual soy milk.  I really liked the detail of this appetizer too.  I could have had another little dumpling in a heartbeat.  A strip of sea kelp tied up the dumpling.  The snap peas were so crunchy and the mushrooms and carrot were fresh and delicious.  We really liked the sweet bonito broth that came with this dish too.  We weren’t shy when it came to finishing the rest of the broth too after everything else was eaten… XD 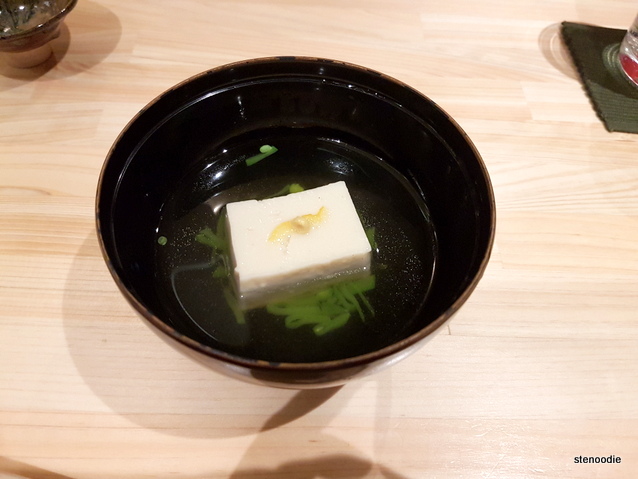 The almond paste tofu soup was one of the highlights of the night.  I know it was just soup but this tofu was incredibly delicious!  I am used to eating plain soy tofu in miso soup in Japanese restaurants so the surprise of the tofu made with almond paste impressed me so much.  This would be a must-try for me to recommend to you. ^_^   The taste of the almond paste was so smooth and strong.  There were pieces of crunchy bonito in the soup too. 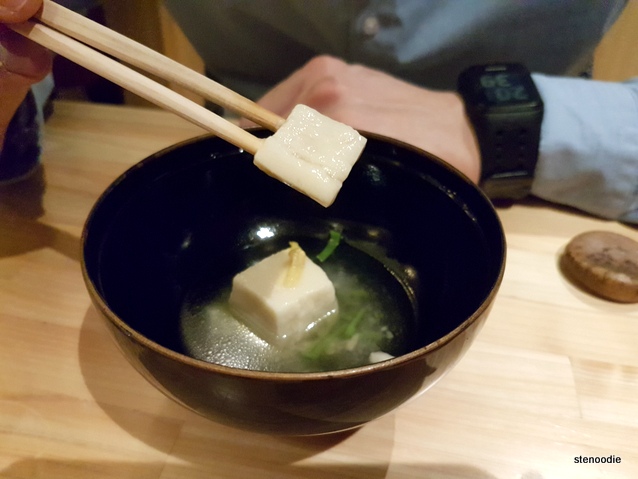 After the appetizers and soup, we received a small box with a folded wet napkin in it.  Our server informed us that the upcoming sushi pieces were best eaten by hand and had sticky rice.  Thus, the convenient little box of a folded wet napkin with a dedicated area for finger-washing was most appropriate. 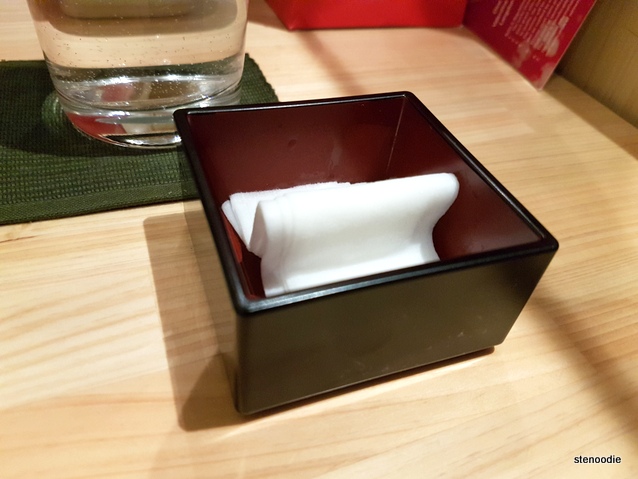 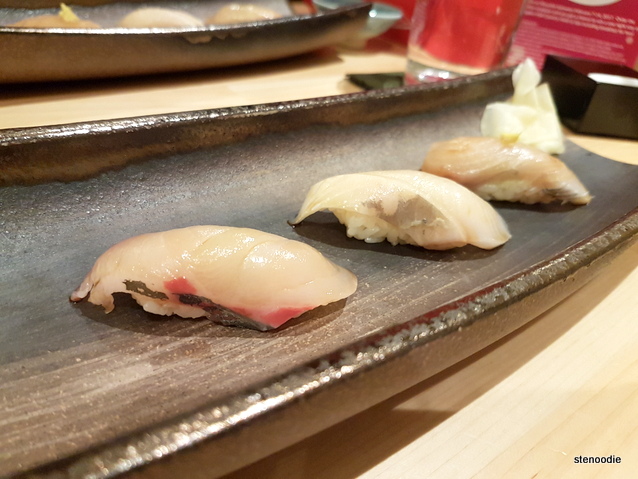 Our first plate of sushi arrived with three pieces.  One of them was a striped jack.  I liked this one the best since it was just a tad fishy-tasting and tasted memorable.  I wasn’t as impressed with the second one and the third one was similar to the second one in taste.  (Lol, will update the names of the sushi as soon as I find out their names.)

The sake that we had with the sushi dishes also went really well with the raw seafood.  I found that the taste of the Ki-Ippon 180 sake changed a bit after each sushi.  It went from light tasting to semi sweet to light again. 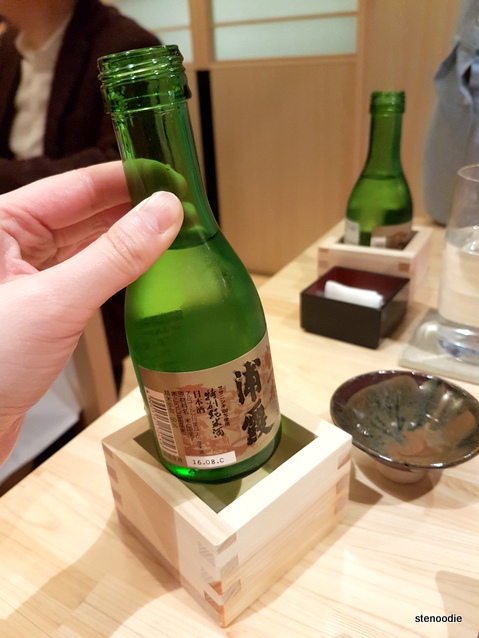 The second plate of sushi arrived also with three pieces.  There was a smoked sushi piece that was so chewy and unique.  We both liked this one.  Surprisingly, the otoro wasn’t my favourite here. 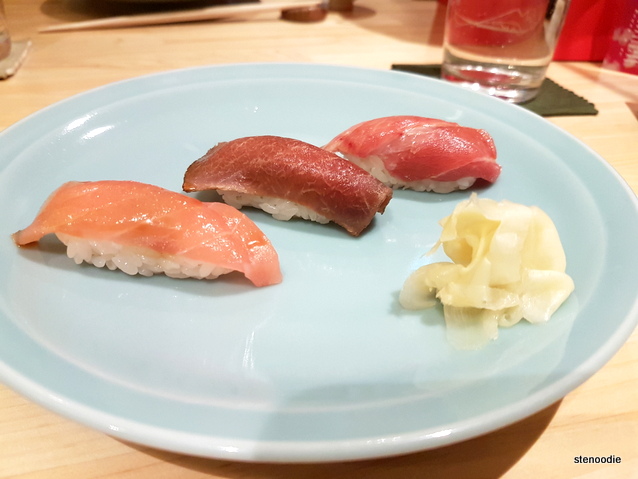 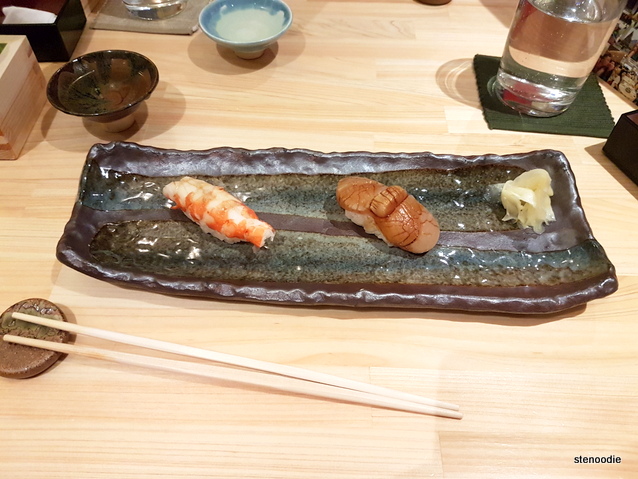 We finished off the sushi course with shrimp and scallop.  Each of the sushi were brushed with sushi soy sauce and this was especially apparent with the scallop sushi.  The shrimp sushi was so fresh and the piece was so large.  I liked this one.  The scallop sushi wasn’t as fresh and sweet-tasting as I expected.  I’ve had raw scallop before that tasted very sweet.  This one tasted a little bitter to the both of us and we weren’t sure why… 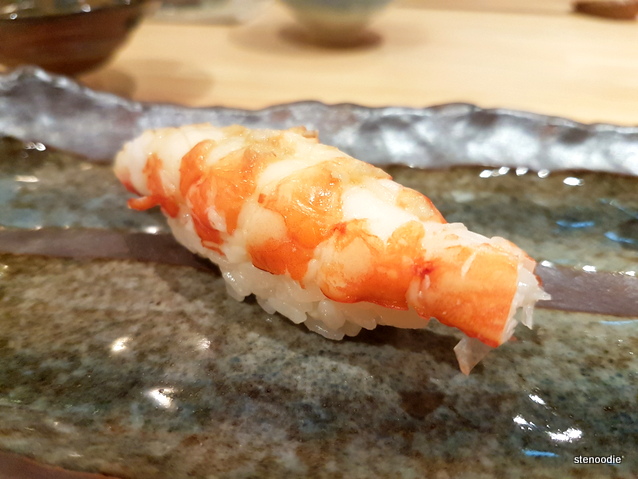 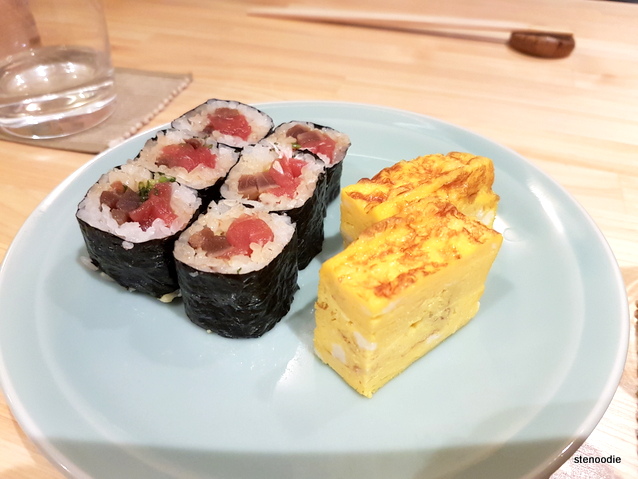 Next up, we had a maki set with tamago as a pre-dessert.  Although writing this blog post shows the dishes quickly in succession, we actually really took our time with each dish to savour each bite, cleanse the palatte after each one, and didn’t feel rushed at all.  Our server was very patient to notice if we were done each course yet before serving the next one.  I loved the service here for that reason especially.

I absolutely loved the maki rolls.  It looked so simple but it was assembled with delicious Japanese rice (I had been raving about their sushi rice all night actually) and the raw fish was so soft.  It was a really, really delicious maki roll!

The tamago was also really good.  It was fluffy with a tad of sweetness in it.  Yum!

We finished off our omakase with a choice of three desserts: matcha pudding, sweet potato crème brûlée, and sorbet.

The matcha pudding was topped with a small piece of apricot and a white mochi.  The matcha taste in the topping of the pudding was truly authentic and so delicious!  Words can’t describe this dessert’s deliciousness fully. 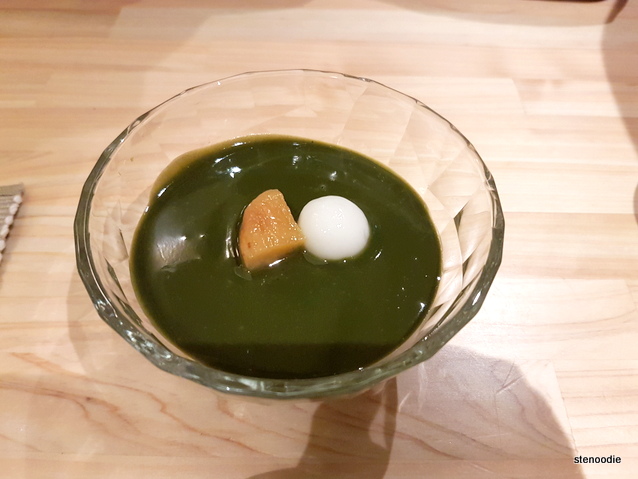 The sweet potato crème brûlée was truly a unique dessert.  The hard caramel top was slightly sweet and you could taste the sweet potato in the grainy custard base.  It was very unique! 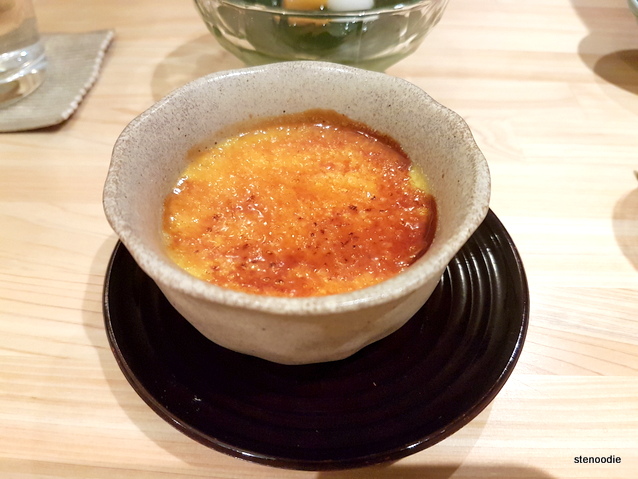 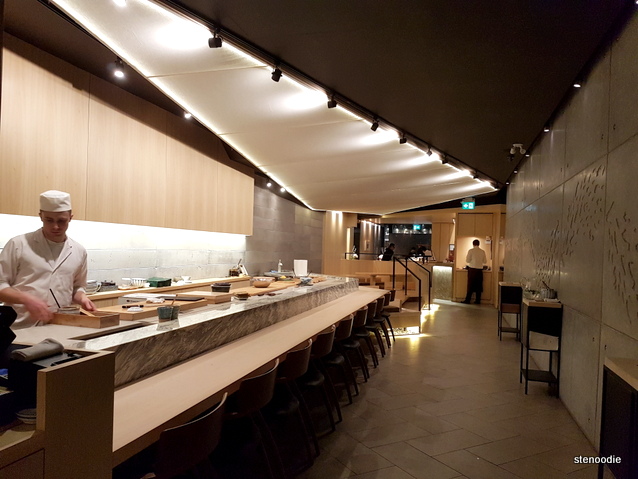 Empty Shoushin as we left for the evening

By the time we left and paid the bill, the restaurant was pretty much ours.  The other guests had already left and the staff made sure that we left the restaurant with as much respect and warmth as when we arrived.  All of the staff bowed deeply to us; definitely a sign of respect in Japan for the guests.  Even when we had exited the restaurant, one of the staff stood by the doorway and bowed again.  It was such a courteous gesture. 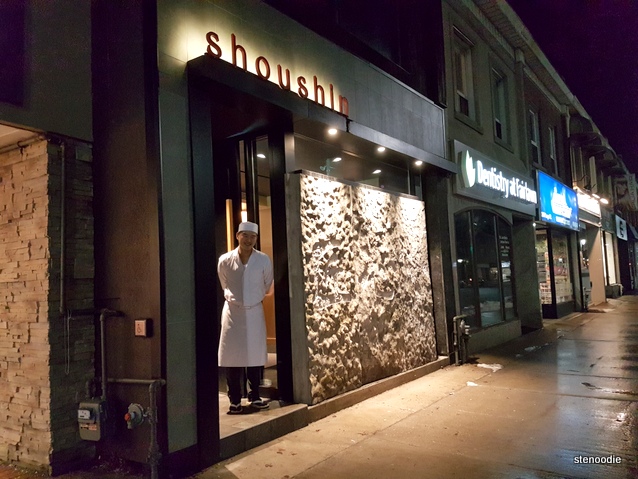 Being warmly escorted out the restaurant

I’m really happy that we got to try Shoushin!  If you go, I hope you’ll have a good time.  Make sure to visit their restrooms as each one is fully equipped with a bidet!  This high-tech toilet featured a warmed toilet seat (I almost always never sit on public toilet seats but this one was definitely an exception), two settings for “cleaning” your behind, and a “dryer” too!  I’ve only ever seen and experienced these nice bidets in Japan.  (When I opened the washroom door, the toilet seat cover automatically lifted up too lol.)  What a great experience!