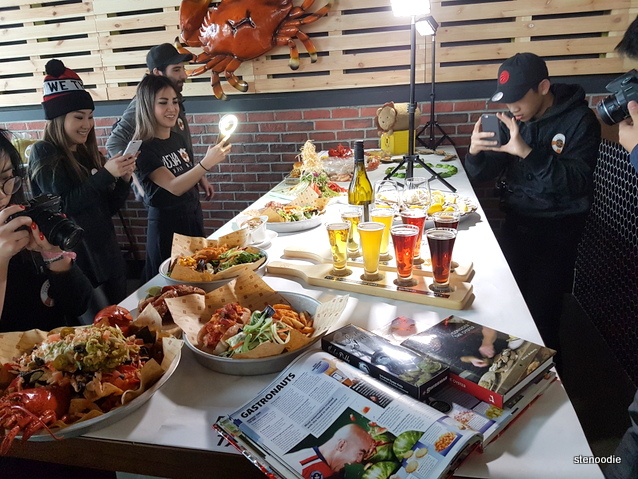 I was really grateful and happy to be able to attend the Media Event of the newly opened Good Catch Boil House located at 179 Enterprise Blvd, Unit M-109 in Markham.  They are located at a hip and happening location right now as there are so many great restaurants  also at 179 Enterprise Boulevard (it’s where Cineplex Markham is).

Good Catch Boil House is a new Louisiana-inspired seafood restaurant and sports bar. They are different from other trending seafood boil restaurants in the city since not only do they serve seafood boils (eating boiled and flavourful seafood from plastic bags with your hands — cutlery-free!) but also, they serve other seafood items like lobster rolls, oyster sliders, and slaw.  They also will have Markham’s first raw oyster bar as well as are a full sports bar with flat-screen TVs and beer on tap amazing chicken wings for the best venue to watch the game too.  More on this later. 🙂

If you are driving there, park at the parking lot or the underground parking.  The restaurant is not located inside the Cineplex theatre at all.  Instead, to get into Good Catch Boil House, you should walk towards Enterprise Boulevard and it is the restaurant at the north east corner. 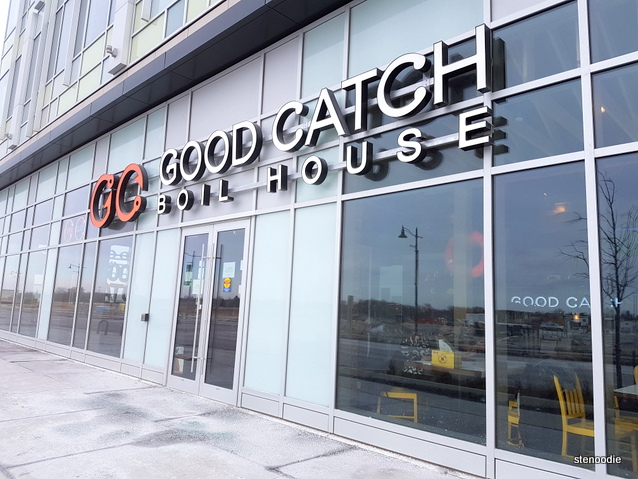 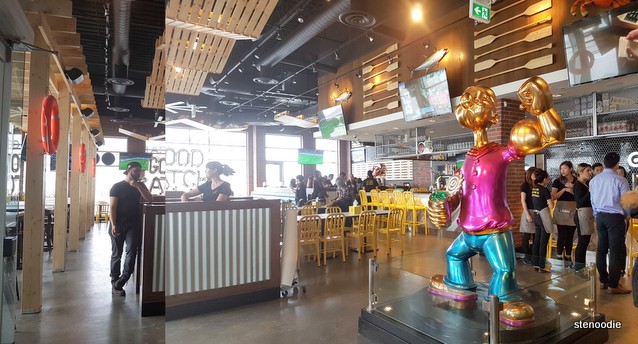 Large and open space in the restaurant 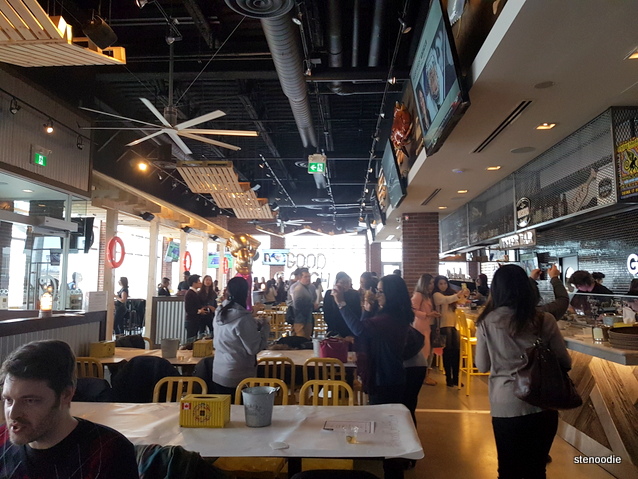 The event was slated to start at 6:30 p.m. but from 5:30 p.m. until the dining time, that was for check-in and sampling of drinks and hors d’oeuvres.  The place was bustling with lots of foodies like bloggers, instagramers, Yelpers, and other media that night.  Good Catch Boil House had closed off the majority of the evening just for our private media event. 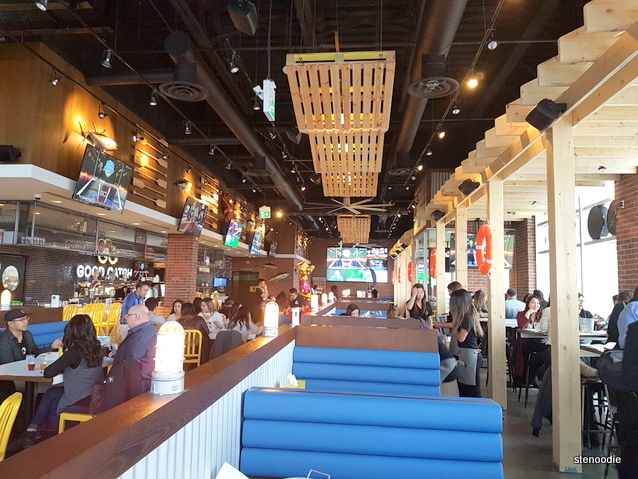 Tons of tables and booths available for seating 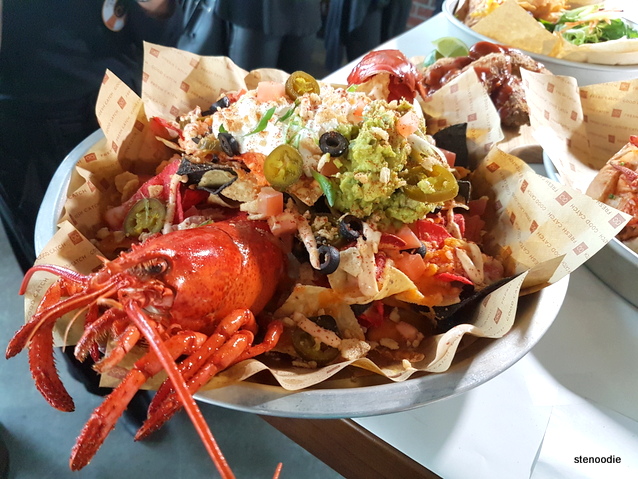 Just one of the many displays on the table for photoshooting, Lobster Nachos!

The entire restaurant was beautifully designed and looked so sleek and modern.  There was a long bar counter with 18 craft beers and beer on tap.  There was a seafood tank adorned with beautifully chalk mural of seafood by Alyssa of Bunny Bum Boxes and Angelita of @angelita_gel.  There was a display table just for the foodies to take as many photos of the display food as they wanted to their hearts’ content.  As well, it was genius that they had a standalone washing station outside the restrooms for you to wash your hands (it is so handy when you are eating seafood with your hands to not have to venture too far to wash your hands). 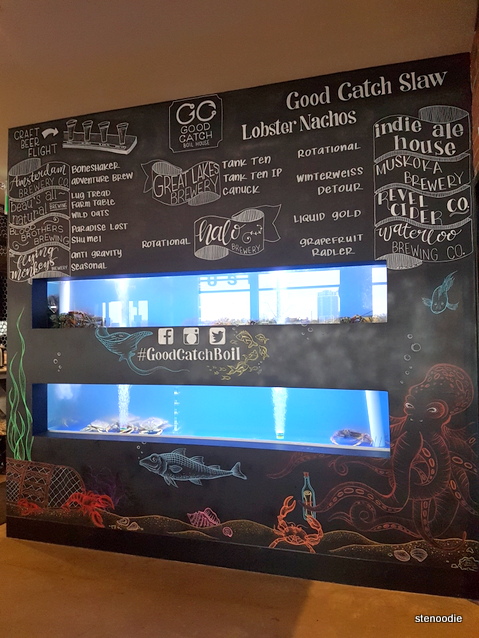 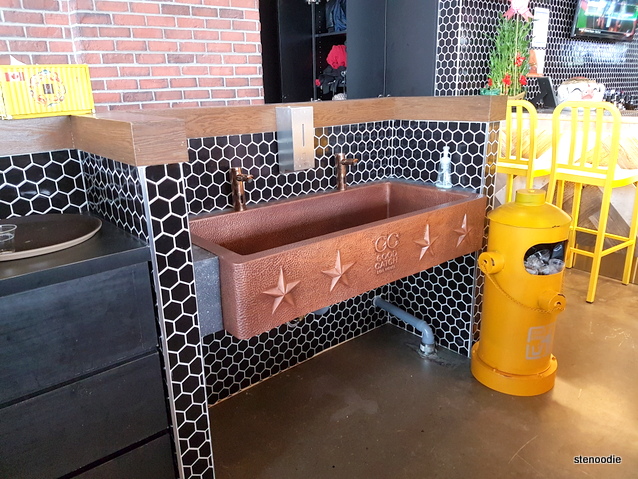 Convenient hand washing station in the middle of the restaurant

During this time before the actual dinner time started, I caught up with some fellow foodie friends and sampled the hors d’oeuvres that were being handed out by the servers (there was also an ice breaker game going on for everyone to get to know each other better — apparently there were over 120 attendees there that night).  I absolutely loved — I have to stress this — LOVED the chicken wings and oyster sliders.  These were the best thing ever!

Sampling honey garlic and spicy wings. The best ever!

The chicken wings came in honey garlic or spicy flavours.  What I loved the most about the chicken wings was that these were so fleshy and meaty, juicy, and so flavourful!  These are some of the best wings I’ve had ever.  The meat was moist underneath the wet flavours too.  Perfect wings!  (This is why I mentioned that this is the perfect place to come to watch the game and have some wings too.)

The oyster sliders were bite sized burgers where there was fried oyster, mayonnaise, and some greens between soft and fluffy buns.  It was so, so tasty!  This is a must-try when you come to Good Catch Boil House. 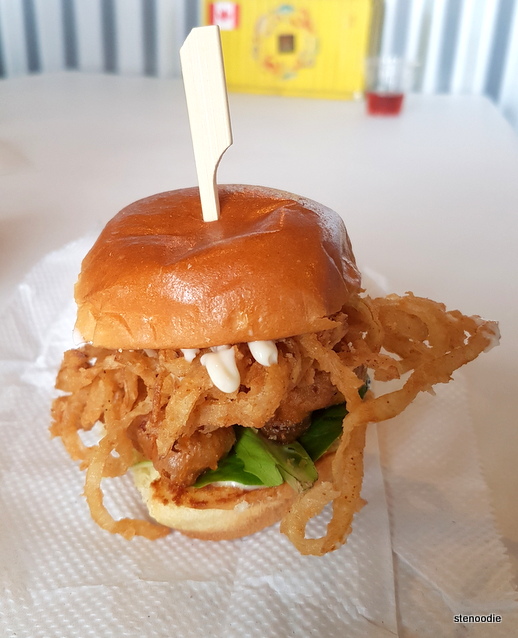 I tried the fried calamari too and these were very tasty as well and not over fried at all.  (These were seriously really well done calamari but since the wings and oyster sliders were so delicious, these completely overshadowed how good the calamari were!) 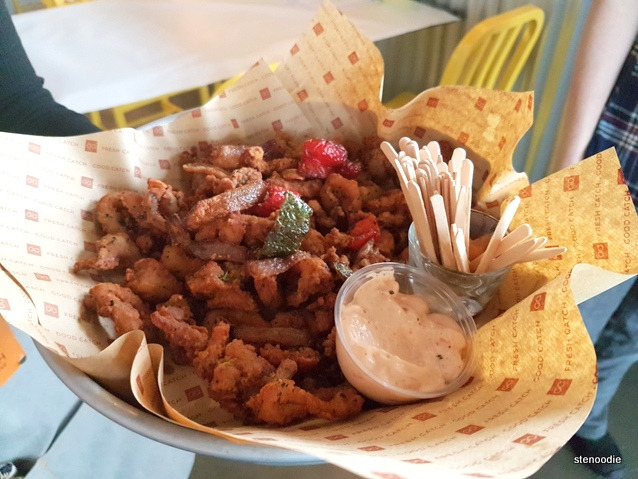 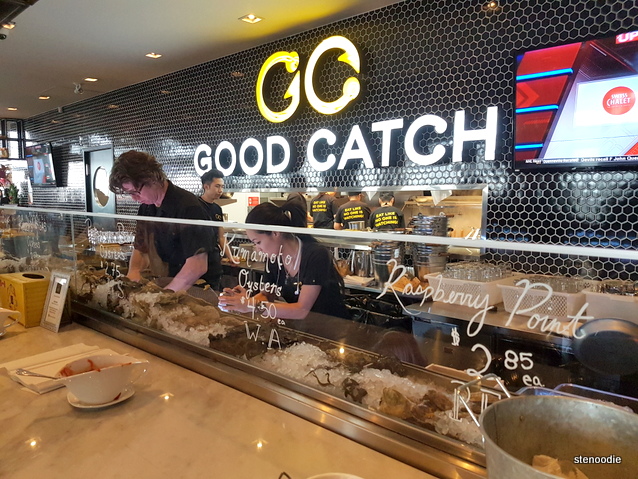 What a treat it was to try the raw oysters from the oyster bar.  It was an extra treat because the World Champion Oyster Shucker, Patrick McMurray, was on deck to shuck  Glacier Bay (New Brunswick) oysters for us too.  Good Catch Boil House was very generous to provide us with fresh raw oysters to dine on.  I love raw oysters and these oysters were very fresh and tasty.  Mmm. ❤ 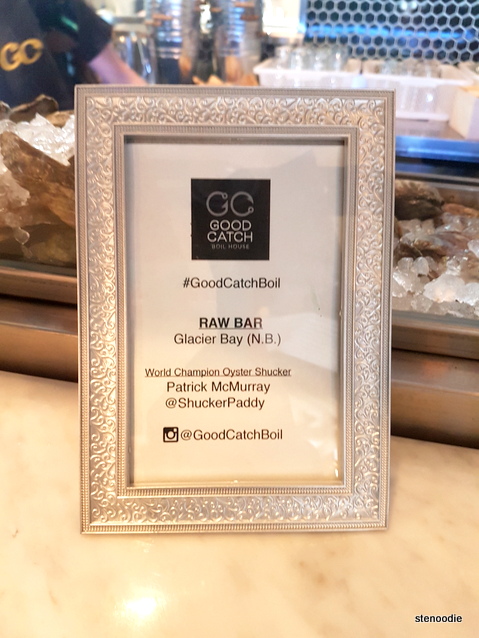 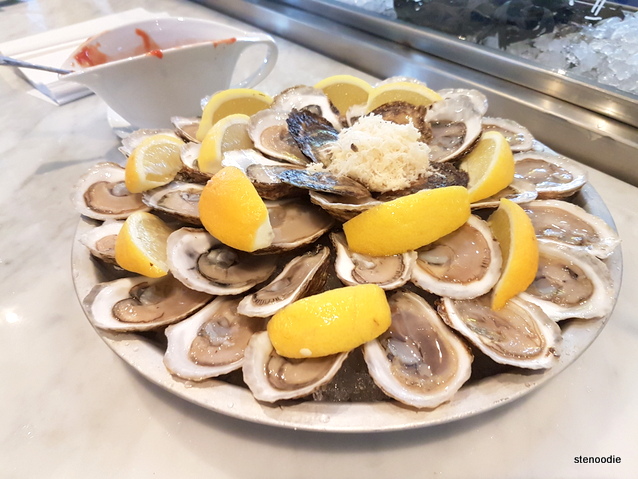 There were a number of drinks that we could sample that night.  This included the Paradise Lost, Lug Tread, and two types of beer from Flying Monkeys.  Anything else that we wanted to order that night was on a per drink basis. 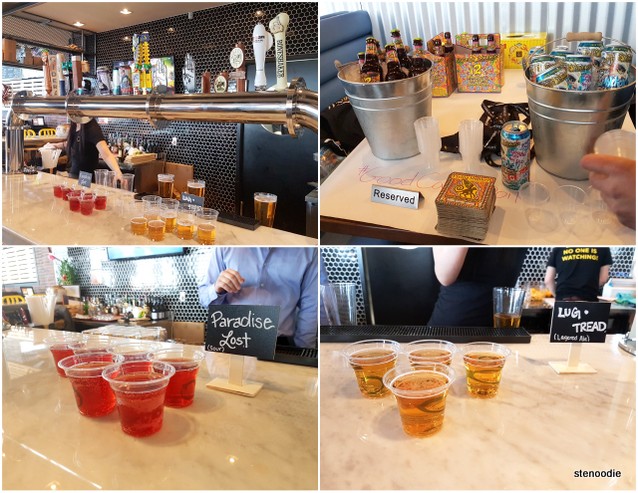 Before the main dining festivities of the night began, Veronica and Raymond and I went to take a few photos with props at the photobooth. 🙂 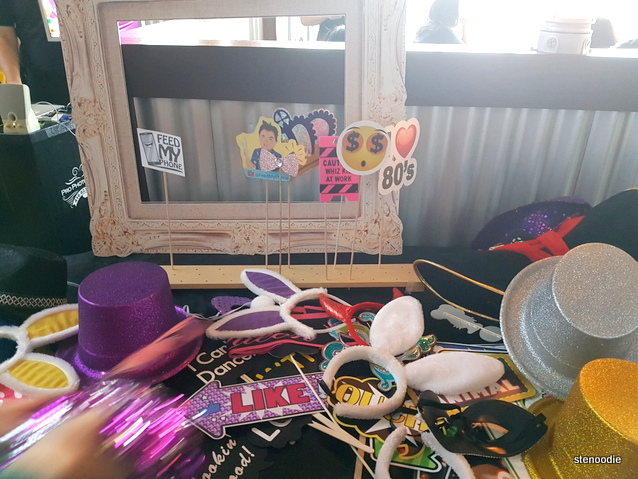 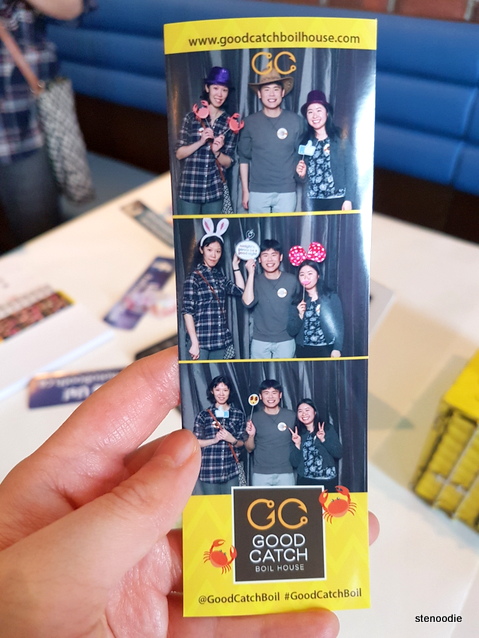 By 7 p.m., we were all ushered into our seats so that we could begin the dining portion of the evening.  Chef Davy Lo was in charge of the media tasting menu that night and there was a good selection of popular picks from their current menu. 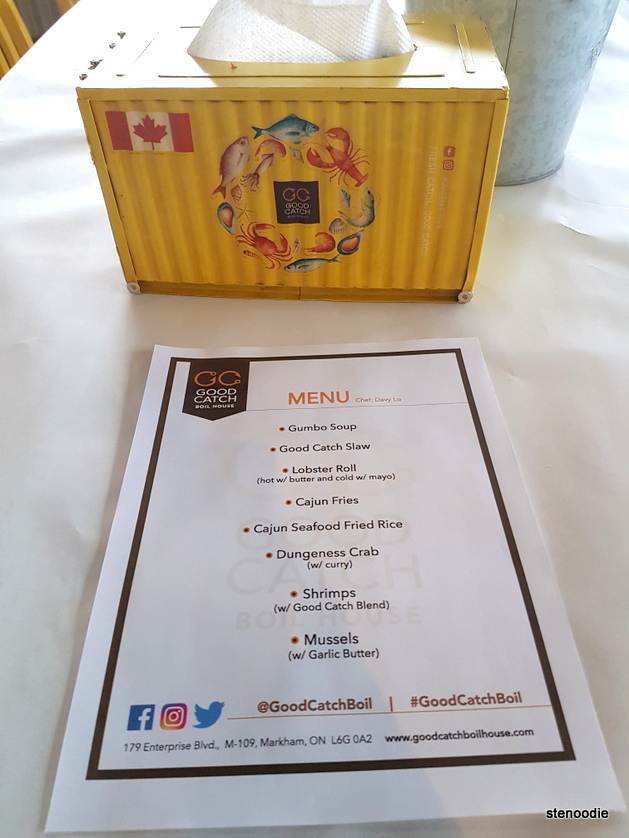 The tasting menu for the night 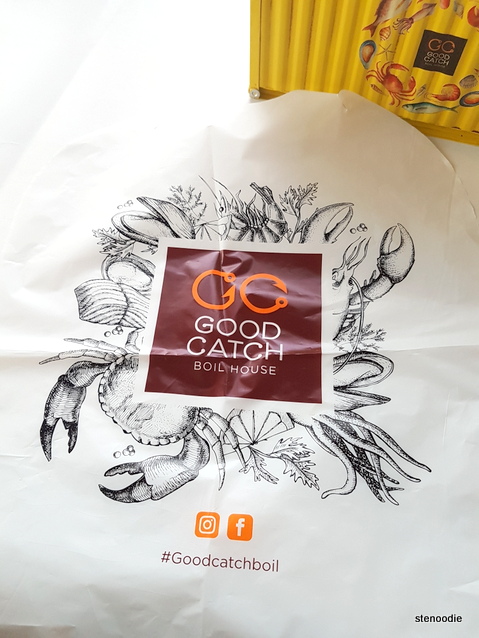 The Good Catch Slaw was a beautiful mountain of fresh and healthy ingredients that you could then mix together with the provided raspberry sauce to enjoy an appetizing salad to start off the meal.  It was really good and I liked it.  I especially liked the sweet figs in this slaw. 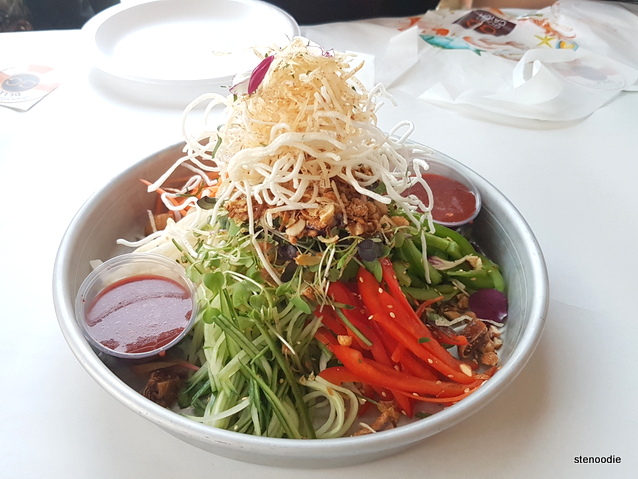 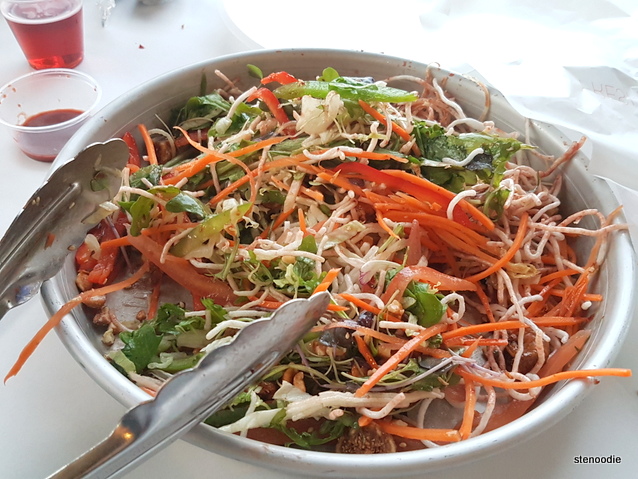 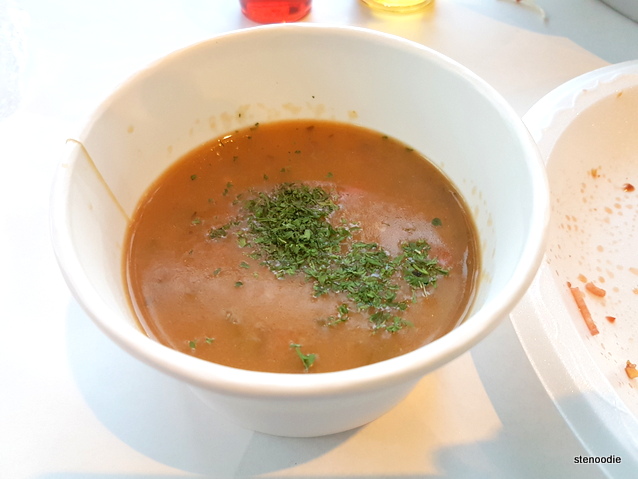 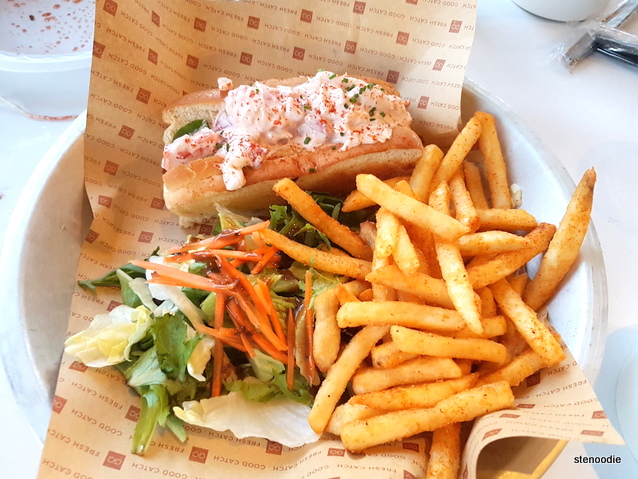 The Lobster Roll that night arrived in both cold and hot versions.  The hot version came with butter and the cold came with mayonnaise.  Unfortunately, by the time the servers reached our tables they were only left with the cold version left.  The silver lining in this is that we each got to share the two portions equally between the six of us who were at the table.  I really liked the Cajun Fries!  They were lightly battered and very tasty. ^_^

There were three seafood boil items that we tried that night.  This included the Dungeness Crab with Curry, Mussels with Garlic Butter, and Shrimps with Good Catch Blend (a blend of various sauces).

I am well familiar with seafood boils at this point since it’s an amazingly delicious seafood trend that has taken Toronto by storm.  We were provided bibs and plastic gloves to dig into the plastic bags when sharing the seafood. 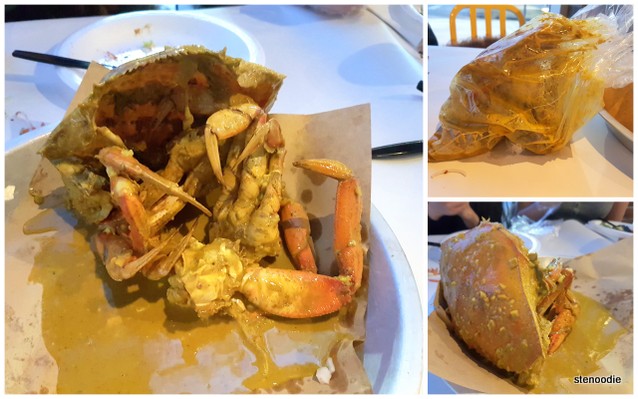 My favourite sauce that night was the Garlic Butter sauce that came with the Mussels.  This was amazing. 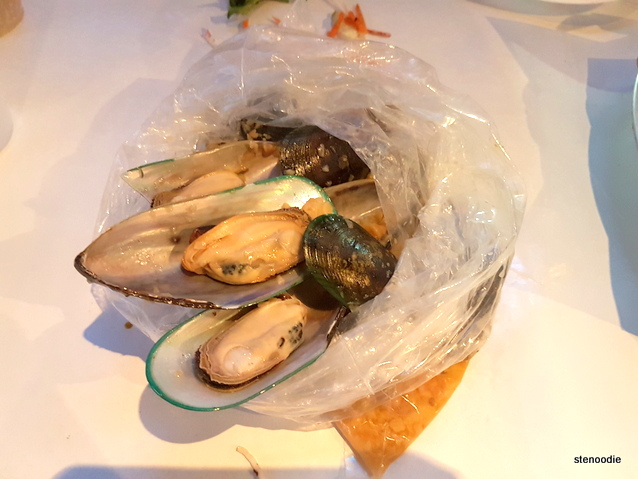 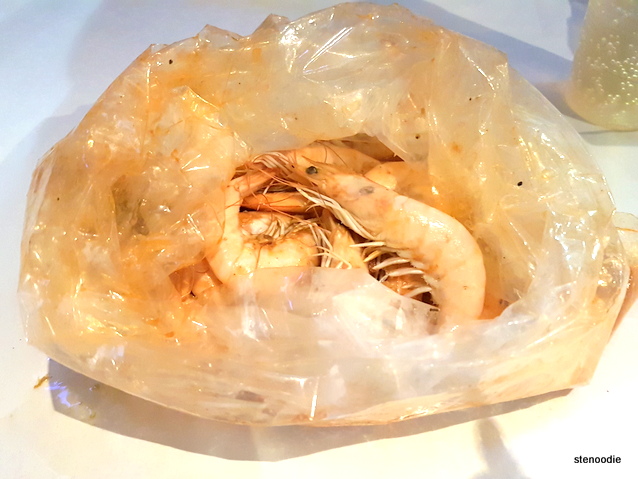 We finished off the tasting menu with the Cajun Seafood Fried Rice.  This had a tiny hint of spice which we enjoyed but was still quite spicy for our dear friend Veronica.  I enjoyed the fried rice. 🙂 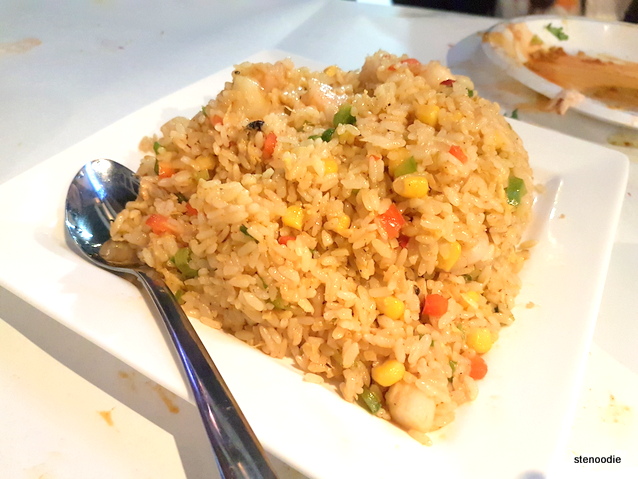 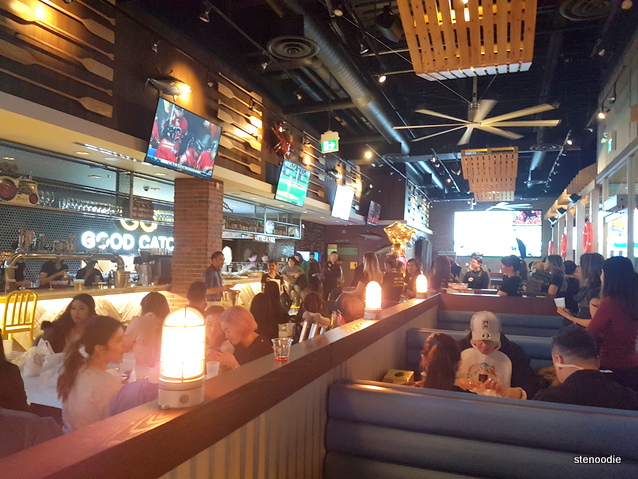 The end of the media night concluded with the raffle draw using the ice breaker sheets that we had submitted.  A lot of lucky attendees received prizes such as oyster shuckers (so cool!) and cookbooks related to oysters.  Before we went home though, we each left with a gift from the restaurant.  This was a mini wooden board that you could use to serve cheese and cold cuts (and whatever else you want to use it).  This was so thoughtful and practical! 🙂 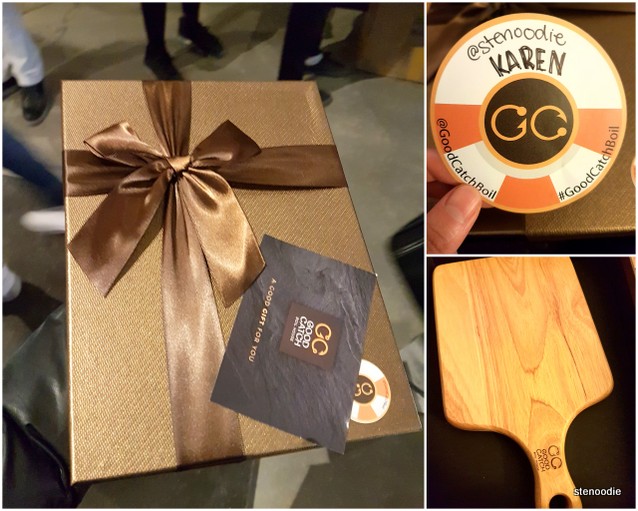 Our parting gift and a $20 gift certificate. Thank you, GC! 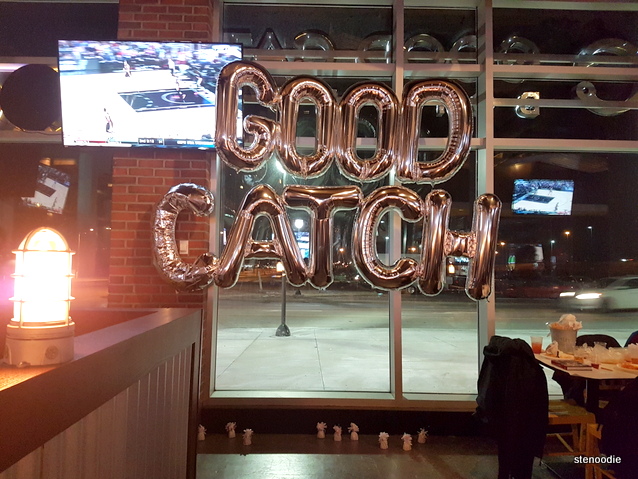 I want to thank Good Catch Boil House for inviting me to the media night tasting and for providing such amazing service, food, and drinks for all of us that night.  It was incredibly well organized as well.  Thank you to Patrick of @feedmyphone for hosting the event too! 😀 ^_^

I already on returning back to Good Catch Boil House.  I will be returning for their amazing chicken wings and oyster sliders!  I highly recommend it to you as well. 😀

FTC Disclaimer:  Although Good Catch Boil House reached out and invited me to a complimentary tasting, the opinions expressed here represent my own and not those of the company.