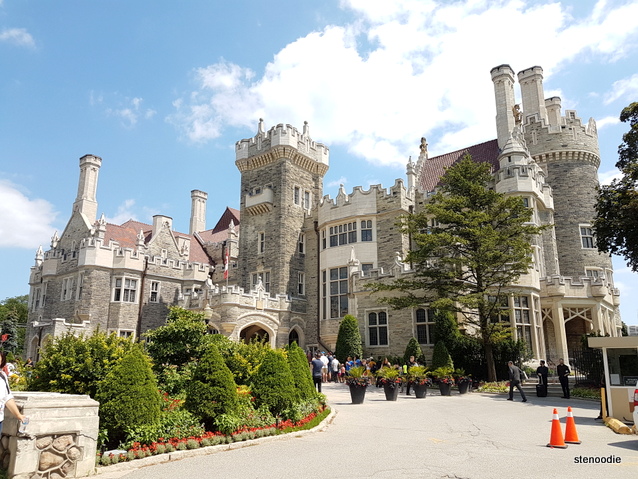 Ever since Casa Loma came out with their own escape games inside their castle walls, I had been so eager to come and play!  However, when it first came out, there was a month-long waiting list or something and I didn’t get a chance to round up friends to go.  Luckily enough, a couple of weeks ago, the Toronto Trillium Lions Club planned out their year-end event at Escape Casa Loma and RSVP-ed “yes” immediately since this escape game venue had been on my list for some time.

First of all though, Escape Casa Loma is not cheap.  I wouldn’t recommend this escape game to newbies because it’s so top tier that if you try this one first, you might not enjoy the escape games that the rest of Toronto has to offer.  You have to slowly build up your escape game tolerance — like a “save the best for last” mentality. 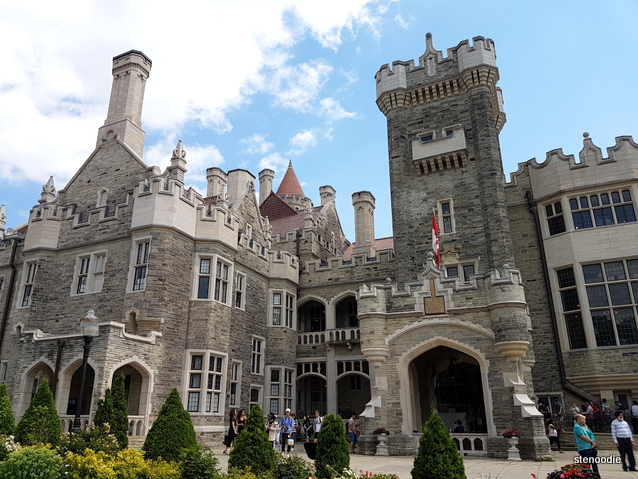 I was here most recently for the Beauty & the Beast exhibit!

Anyway, Kim was the one who helped us book the room.  Each person paid $45.  It was an hour and 15 minutes’ worth of play time and after playing the game, I know why the price at Escape Casa Loma is so inflated; it’s because they actually hired live actors to be in the rooms while you play.  You interact with them and that’s how you get some of the clues.  So it made sense then that the price was so high (most of the other escape rooms tally to about $20 to 30 which is more reasonable).  (Their puzzles and props were also top notch in quality and design.)  Thus, don’t come to Escape Casa Loma unless you’ve already tried out some other top tier escape rooms in Toronto.

When Priscilla and I got to Casa Loma at around 3:30 p.m., we entered the doorway that was marked off with “Escape Casa Loma” — it’s not the main entrance of the castle.  We went down the stairs which actually led us to the basement of the castle where the restaurant, souvenir shop, and restrooms were.  The ladies at the reception desk had us check in and sign a waiver.

We watched a short introduction of the rules that they had during the game in a dark cellar resembling a dungeon and shortly after, our game started.  We played the “King of the Bootleggers” game (there are two other ones at Escape Casa Loma that you can choose from). 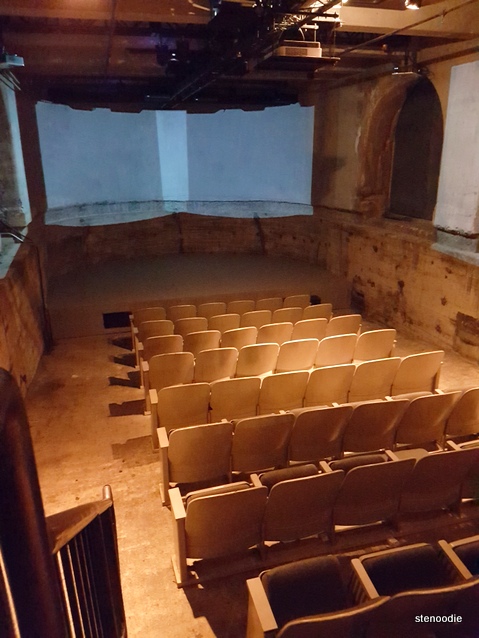 The cinema room where we watched the video for the rules

Overall, I loved it.  It was really fun.  We had 16 players and we did split up during the game in order to solve different parts of the narrative.  The actors in the game were so good at role playing and stayed in character during the entire game.  Again, no wonder the fee was higher for this type of escape game; it wasn’t your usual ones where if you needed help, you just ask someone through a walkie-talkie — here, you talk and interact with the characters to get clues.  Also, the quality of the props, clues, and overall environment were so well done!  The fact that the whole thing was set inside a castle probably helped nicely with the theme too. 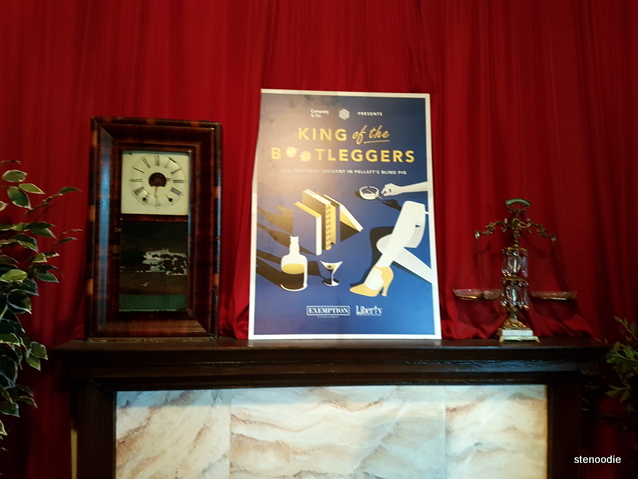 King of the Bootleggers

I will give no hints or insight into what the game was about because that would completely ruin it.  I had a blast though and really enjoyed the game.  However, I can’t say I’ll be back too quickly again.  Spending $45 in a single drop can really add up! 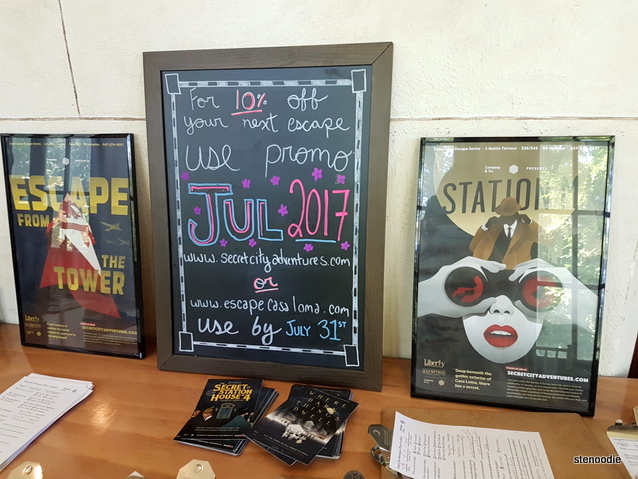 Also, we successfully escaped our room/solved our narrative with just one minute and 20ish seconds to spare!  Apparently, we were in the top 20% of people who finished the narrative.  Yay us! 😀  (We named our team “Strangers Gang” since half of us didn’t know each other XD.) 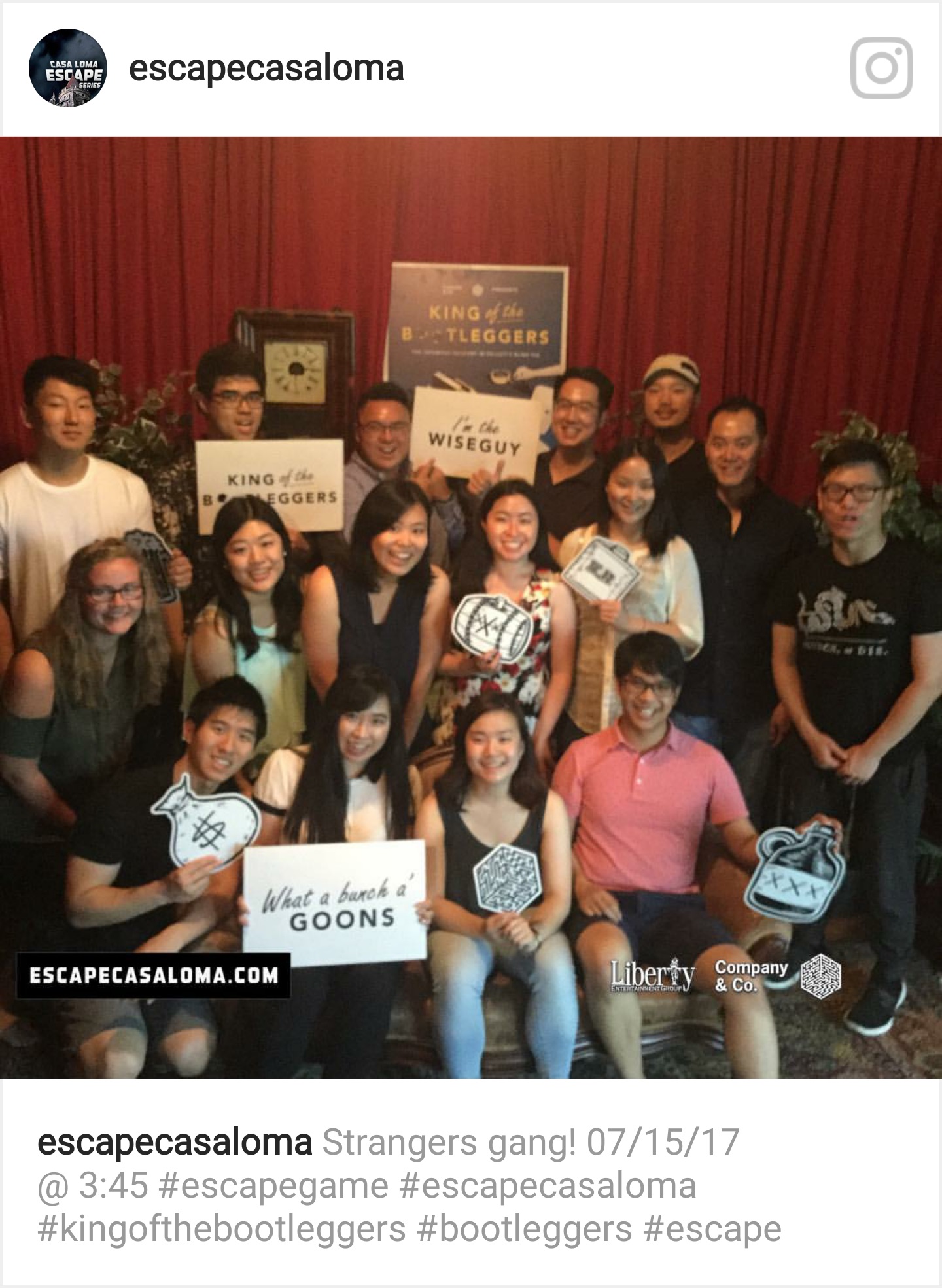 (Apparently, our ticket prices were in the “prime time” range which was $42 plus HST (Thursday to Saturdays).  The regular ticket prices are $36 plus HST, which I’d advise you to try to attend if possible for a more affordable experience!)

4 Responses to Playing Escape Casa Loma – King of the Bootleggers