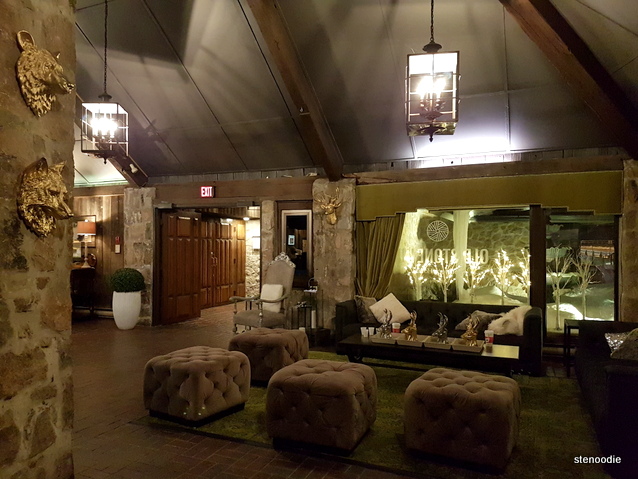 Last weekend, we stayed at the Old Stone Inn Boutique Hotel when we were spending the weekend away in Niagara Falls.  This hotel was one that popped up on Groupon when we were briefly looking for a hotel to make reservations for for our trip.  Like many of the other hotels listed, this also included breakfast and dine-in vouchers, and wine tasting and chocolate tour tickets.  What made this hotel stand out though was its affordable pricing, close location to the Falls, and really rustic and unique-looking interiors!  The photos on the website showed that it was a boutique style hotel.  In fact, this hotel used to be a former flour mill and retains its former brick and stone interior too.  You can see it in the interior when you walk in.  Thus, it was almost a no-brainer to book this hotel to try it out (also, the reviews on the hotel from other travellers looked great too — it was rated a 3.5 to 4 star). 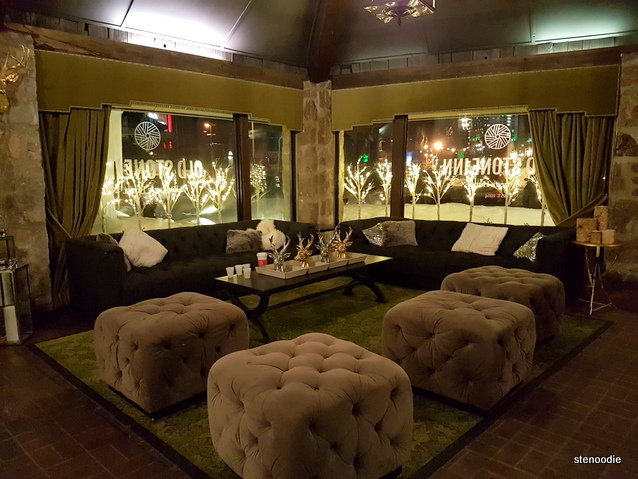 What a beautiful lobby!!

We were the very last ones to check in on a Friday night since we arrived around 11 p.m. by the time we drove in from Markham to the falls area.  (This hotel was indeed close to the Falls and when we walked to the Falls the next day, it only took only around 10 minutes and there were a lot of restaurants and shops nearby too.)

The male staff at the reception desk warmly greeted us and provided us with what we needed for the stay.  There was a per day facility charge and a parking fee too.  While my sweetie was taking care of the check-in details, I was mesmerized by the interior decor.  It was really unlike any hotel I’ve been to!  There was so much character to it.  Like I mentioned in the hotel restaurant post, this was definitely not a cookie cutter hotel and I loved its character that much more because of it!  It very very homey and you can tell from the photos just how cozy it was. 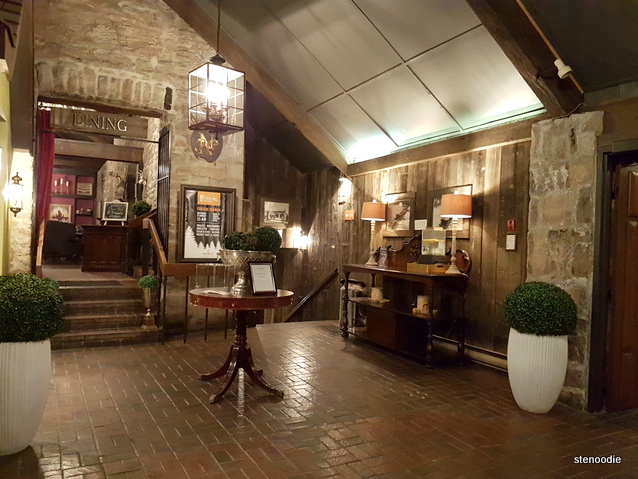 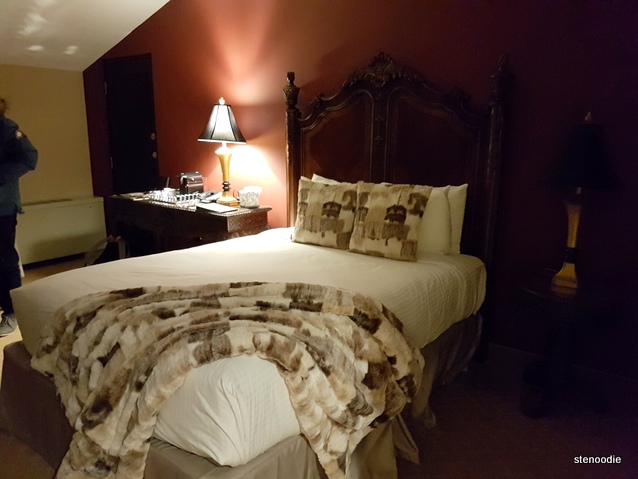 Our room was number 312 on the third floor.  We actually got upgraded to this room that night for whatever reason.  We had no problem about the free upgrade! 😀

Walking in, the room’s ceiling was slanted on one side which made it look almost like those cathedral ceilings.  Again, this wasn’t something you saw in regular hotels.  There were really soft throw pillows on the queen sized bed as well as a really fluffy throw cover too that we really liked since it was so warm and snuggle-friendly.

The room had an espresso machine where you could make your own espresso, flat-screen TV, lights, desk, armchair, and a window that looked out to the stairwell.  I could see the swimming pool down below too.  There was also a bottle of wine inside the room but this was a charged service if you wanted to indulge in it. 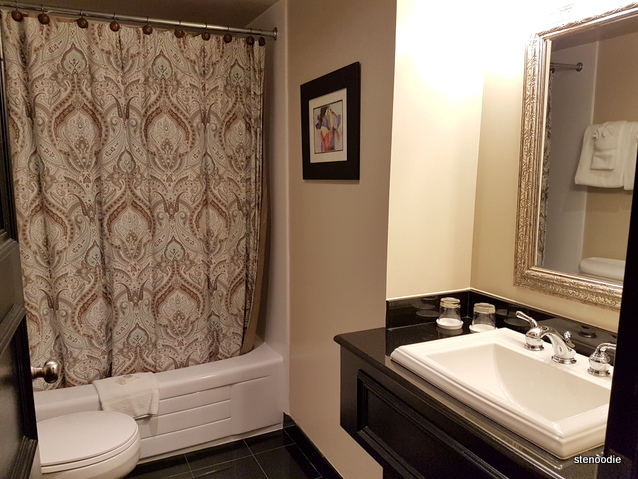 I really liked those shower curtains!

I really liked the bathroom.  It was styled so nicely with paintings on the wall.  I especially liked how the shower curtains were double-layered and they weren’t the plastic ones; these were actual cloth curtains!  Everything was very clean and modern despite it being a hotel dating back to 1904.  (However, when looking at the outside of the building, I believe that only the main part of the hotel — lobby and restaurant — are the actual former flour mill part.  The hotel guest rooms seem to be added on to the main part later on as it became a hotel and thus probably don’t date so far back to the 1900s lol.)

The stay was comfortable and we really enjoyed the two $10 breakfast vouchers that we got with the stay as well.  We used them to dine at the Old Flour Mill for the two mornings that we were there — it was just so convenient to head downstairs to dine instead of finding a breakfast/brunch restaurant nearby.  The food and service were really good — you can read the full restaurant review here. 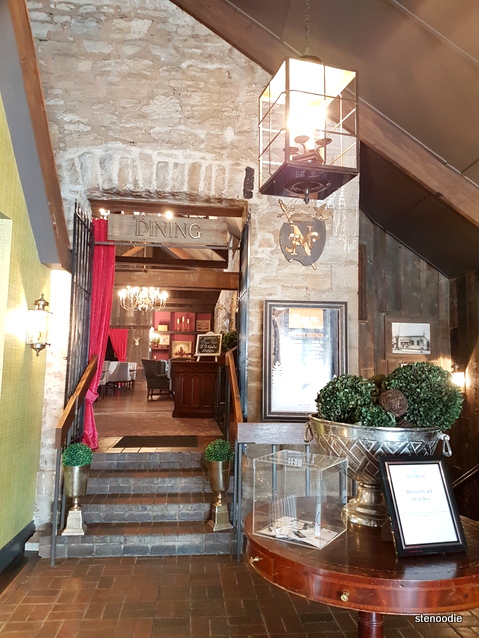 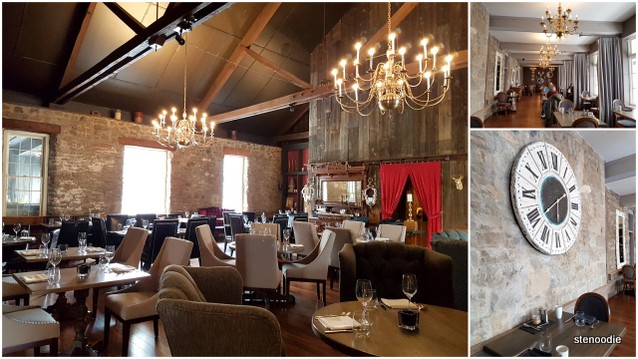 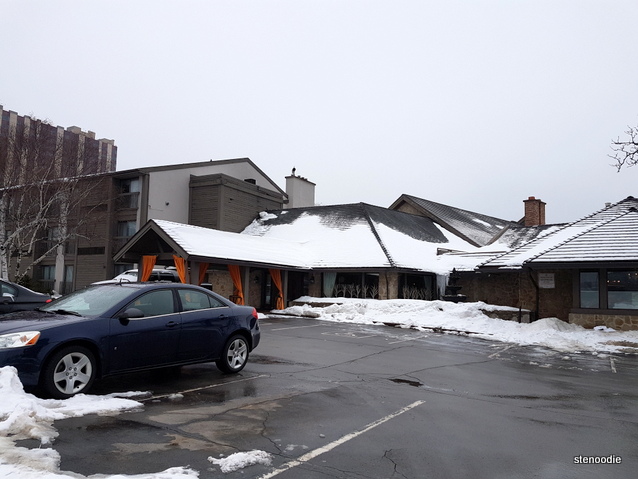 View from the outside

The check-out process was easy and simple.  Their service really was very warm and friendly.  I really enjoyed the stay and would highly recommend it to anyone who is looking to spend a night at the Falls.  Although I haven’t stayed in one yet, it felt like how a cozy bed and breakfast would probably feel due to its unique character and the easiness about the hotel.

Another example of their wonderful service was when we realized we had forgotten something back in our room later in the day after we had already checked out.  After we called the hotel to let them know, they called back with confirmation that they had found the item that we had left behind.  They even suggested to UPS the item back to us but since we were still in the Niagara region, we returned to the hotel to claim our item.  Again, it was a seamless process that I appreciated. 🙂 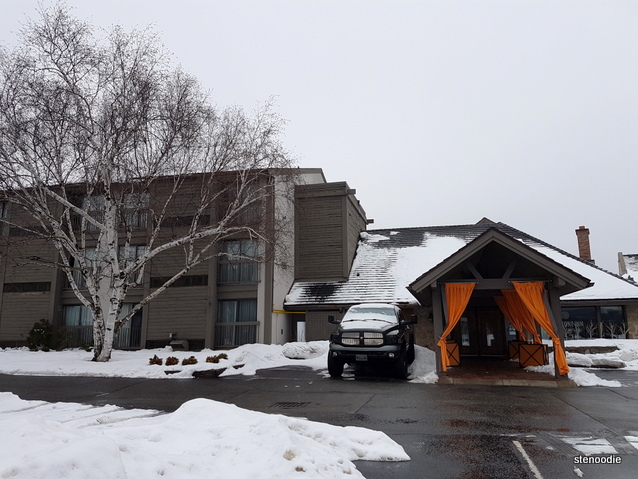 Another view of the front of the hotel. Here you can see the building that was probably added onto the hotel later which houses the guest rooms