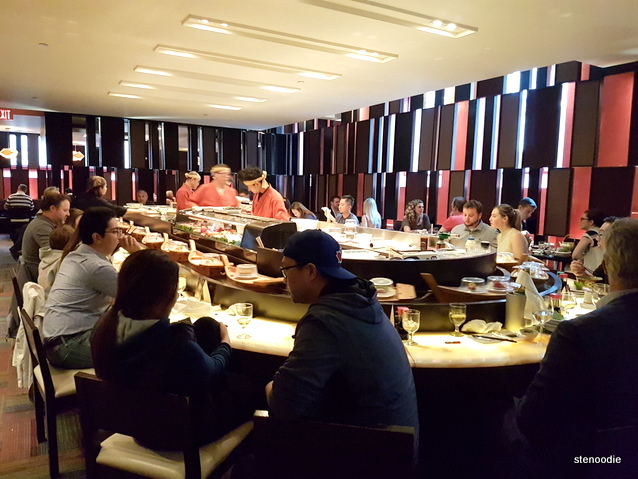 This was definitely the most fun I’ve had in a sushi restaurant in recent memory!  Fune Japanese Restaurant is currently the only Japanese restaurant in Toronto that offers “conveyor belt” sushi.  What’s more, their conveyor belt sushi is even more unique than the regular ones on a track because these were boats of sushi floating on water around a sushi bar! 😀  When I noticed this unique restaurant a couple of months ago, I already knew I wanted to visit it and try and I’m so happy we got to visit it this past weekend. 😀

Ken made reservations for us at the sushi bar where the sushi boat conveyor belt would be.  There’s only a limited number of seats at the sushi bar so if you want to experience the floating boats moving in front of you as you eat, make sure you book a spot or arrive early.  (There are many other tables and a lot of seating in the rest of the restaurant, but those are for regular tables and dining off of the dinner menu.) 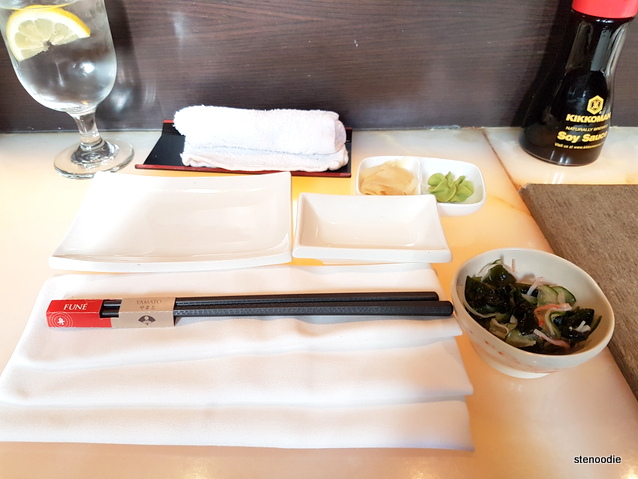 Since we were early, we arrived right before the clock struck five and were the very first ones seated at the sushi bar.  Immediately upon sitting down, the floating boats were already swimming around the sushi bar and waiting for us to enjoy a great dinner. 😀 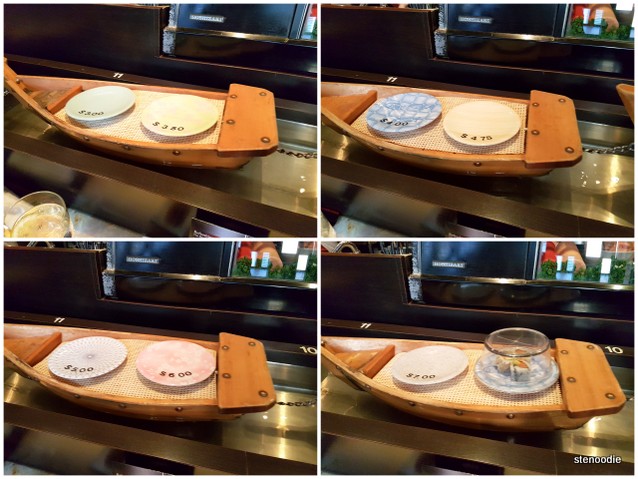 Prices of each plate at the revolving sushi bar

How conveyor belt sushi works is that each different coloured/patterned plate corresponds to a different price.  Whichever plate you take off of the sushi boat that has the food item on it, you will pay that for the item.  Thus, it’s a per plate cost system.  The more you eat, the more fun you’ll have and the more you’ll have to pay too. 😛  After finishing the item on the plate, you stack the plates next to you on the table so that when it comes time to paying the bill, the server will count the number of plates and how many of each kind you ate. 😀  At Fune Japanese Restaurant, the plates ranged in price from $3 to $7.

I loved that we arrived so early to the restaurant because we were able to watch the sushi chefs in front of us make and prepare every sushi and plate it and then place it gently on the moving boats.  It was so fun.  We like people watching so this was the perfect place to do so and we got to eat throughout the meal too with no restriction on time.  It was amazing. 😀 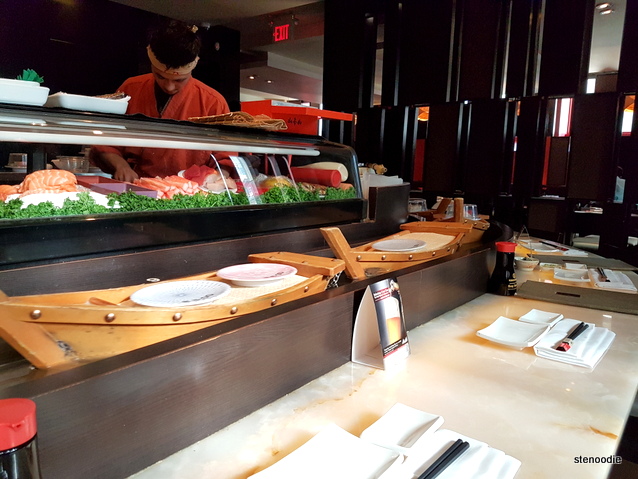 You can see the boats 😀 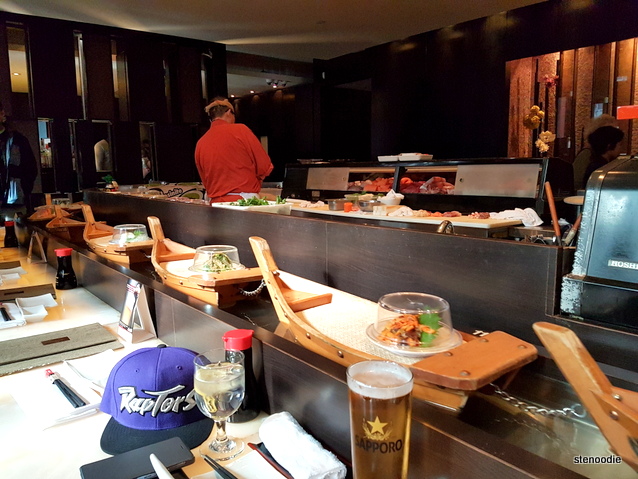 Look at all those boats chained up together!

I was surprised that a lot of other customers arrived right at 5 p.m. too to take a spot at the sushi bar.  There were a lot of people dining around the sushi bar and this made it fun because during the night, there were a couple of times where when we wanted a plate of sushi or sashimi, we had to “fight” against the others to see if the item would make it around the sushi bar in time for us to nab it.  I liked it this way because it ensured that the sushi chefs were always providing fresh selections for us to enjoy.  Also, I’m glad that we arrived early because at or about the 6 p.m. mark, a lot of other customers started to arrive for the regular dinner menu and the sushi chefs were focusing on preparing sashimi and sushi platters for them instead of minding the items for the sushi boats.

We started with an appetizer that had seaweed, cucumber, and imitation crab meat in a pickled brine. 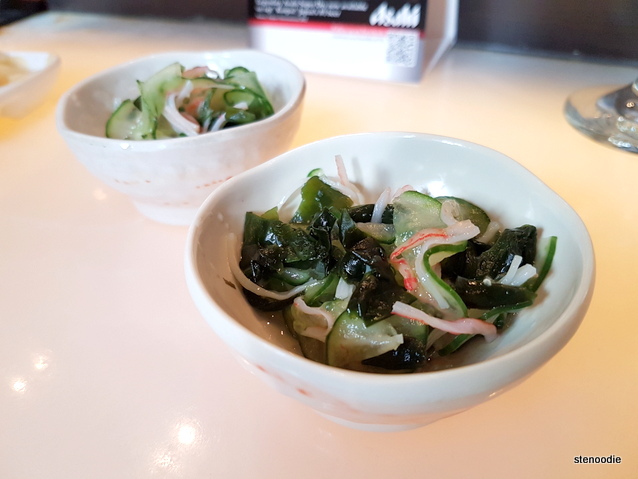 Our drinks.  I had a Blush Wine called Gallo White Zinfandel from California.  It was a nice fresh and sweet wine.  Ken got a draft of Sapporo. 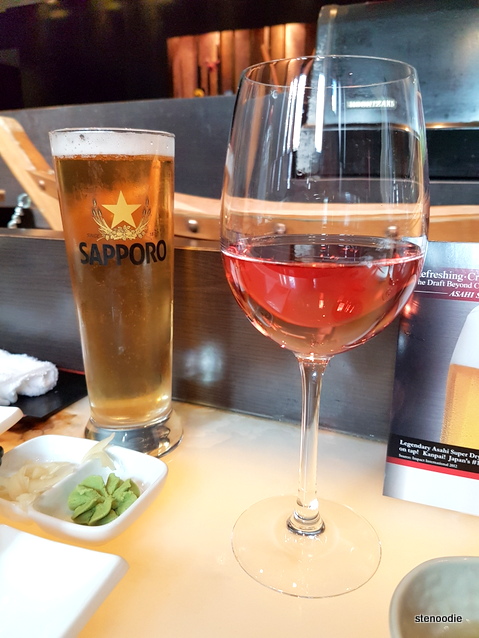 Here are the sushi, sashimi, and dessert selections that we enjoyed that night: :D!

First of all, this salmon sashimi was AMAZING!  The marbling on the raw salmon was so pretty and demonstrated how fresh and fat it was — fat in a good way!  The thick cut of the salmon sashimi contributed to the perfect texture and taste of the fish and was so smooth and a little creamy too.  Best salmon sashimi! 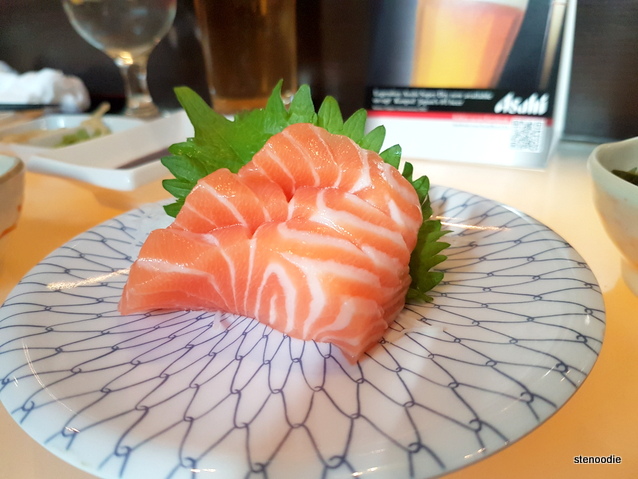 This next red tuna was very meaty and thick as well.  I thought that the sashimi could have been a more cold as it tasted a little warm.  It was very fibrous and chewy too. 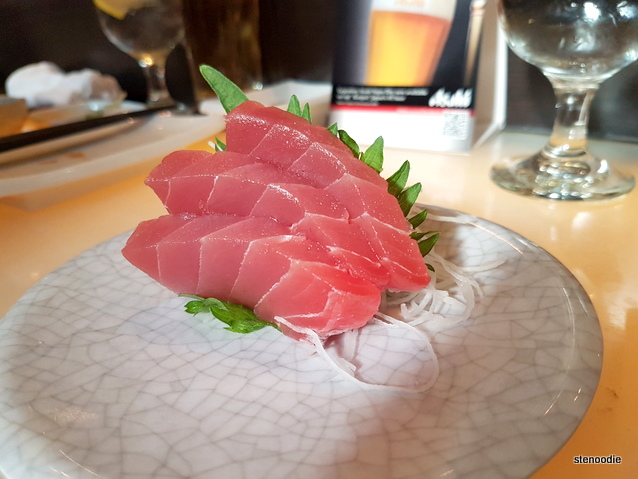 I believe this was hamachi.  It was very good. 🙂  I really liked the ratio of the size of fish compared to the rice.  It was done the way nigiri should be prepared. 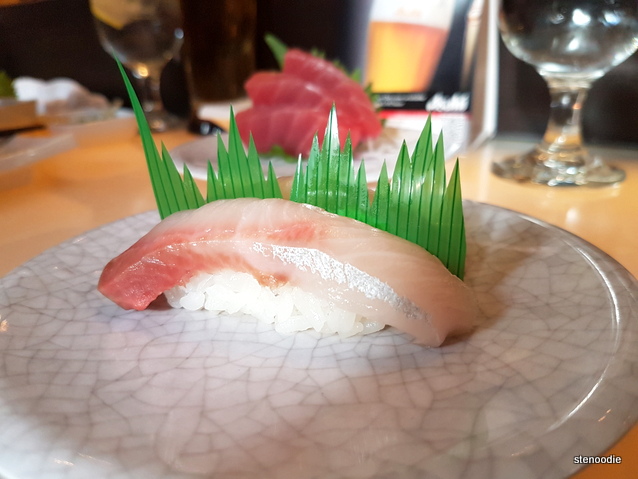 Scallop nigiri!  I really enjoy raw scallop but I did find this a little lacking.  It wasn’t perfectly fresh.  I liked the size of it though.  Look at how big it is! 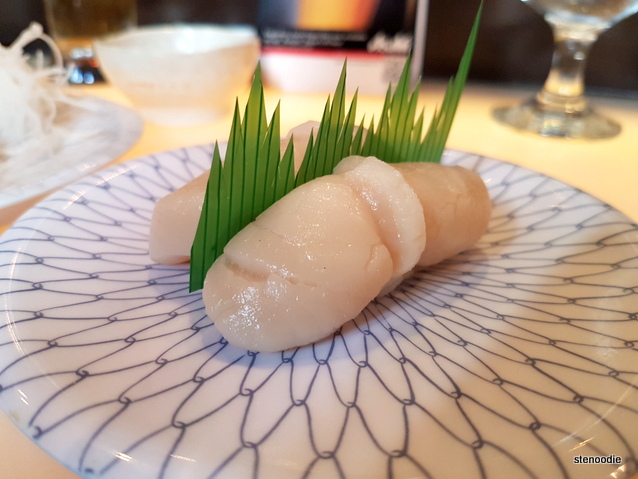 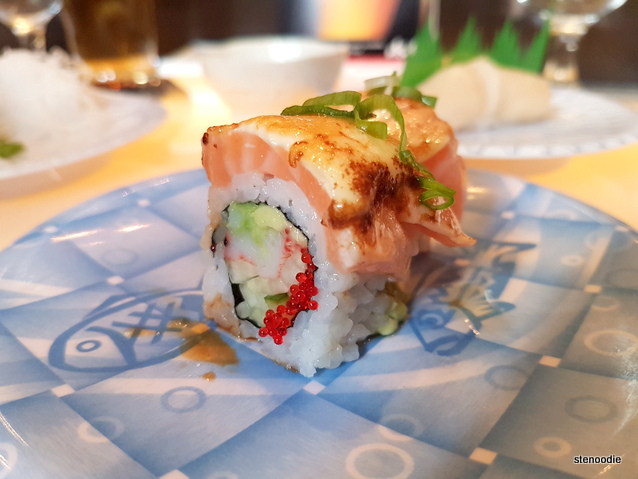 This was the best (and only roll) we had all night.  We actually ordered two plates of these after finding out how delicious this was.  This was salmon that was torched with imitation crab meat, cucumber, avocado, Japanese mayonnaise, and fish roe.  We actually watched the sushi chef torch this baby and we took it fresh off the conveyor belt pretty much (*yoink! *).

It was delicious.  The size was perfect, the salmon was torched so well so it was still raw underneath but warm on top, and the Japanese mayonnaise’s creaminess blended all the flavours together.  Best roll!

Beef tataki.  This was pretty good.  It was very chewy due to the fibers in the beef. 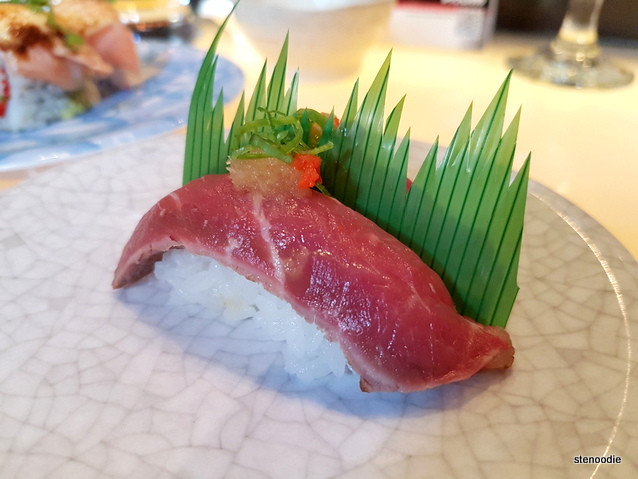 Oh, wow.  This torched sea bream was also amazing!  We watched the sushi chef torch this one too and nabbed it right away.  The top layer of the fish was torched so that the skin was “fried” to a crisp while the underside of it was still raw.  The skin was so crispy and slightly salted.  It was just delicious! 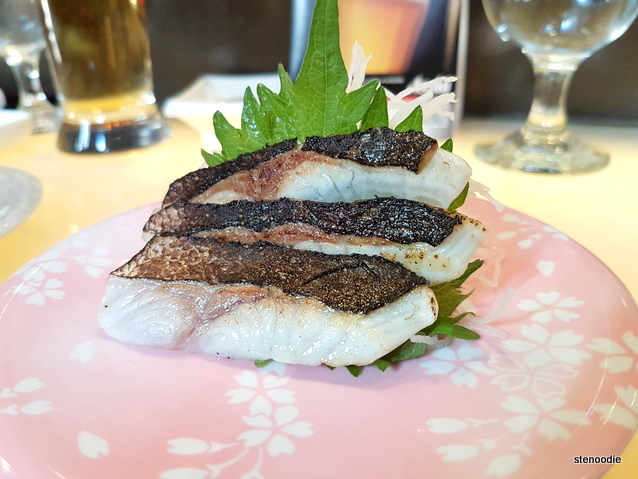 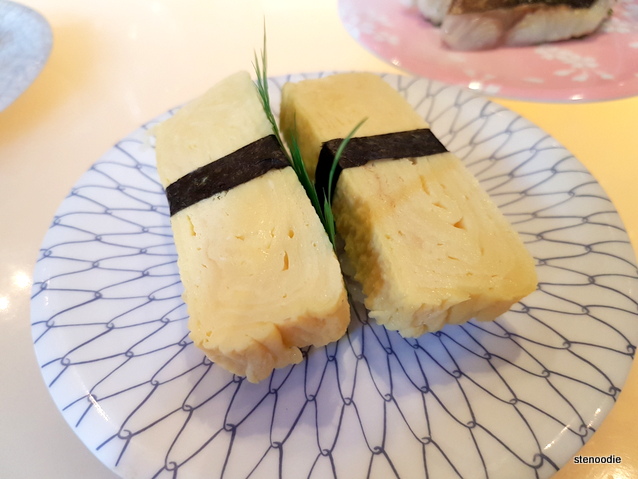 As far as we could tell, this was one of the only three tamago sushi that we saw prepared all night.  After this, the sushi chefs were too busy preparing the dinner rush dishes that we didn’t see any tamago on the boats.  Again, we grabbed this right away as it stepped on the boat because we wanted it.  This tamago was really well done!  The piece of scrambled egg was huge when compared to the tiny piece of rice that it was attached too.  Ken made the comparison to it looking like a heavy backpack for a hunched-over student. XD

The tamago was delicious.  I really liked it. 😀  It was smooth and only slightly sweet (but not too sweet because I don’t like sweet egg).

After this, we took a break from eating and watched the sushi boats going past us and observed our neighbouring diners.  A lot of them ate faster than us and we observed what the most popular items were.  We also noticed which items were not popular and left sitting on the sushi boats — in turn, watching us every time it passed by. XD 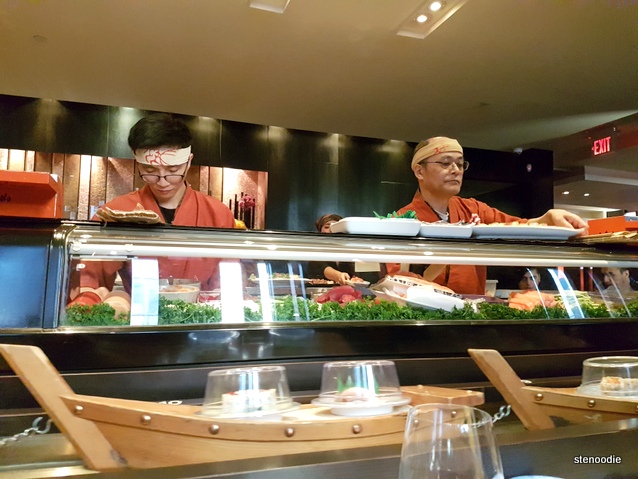 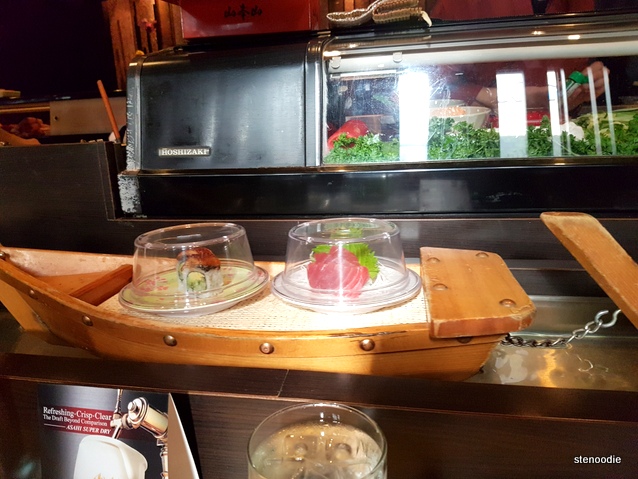 Tuna.  This was all right. 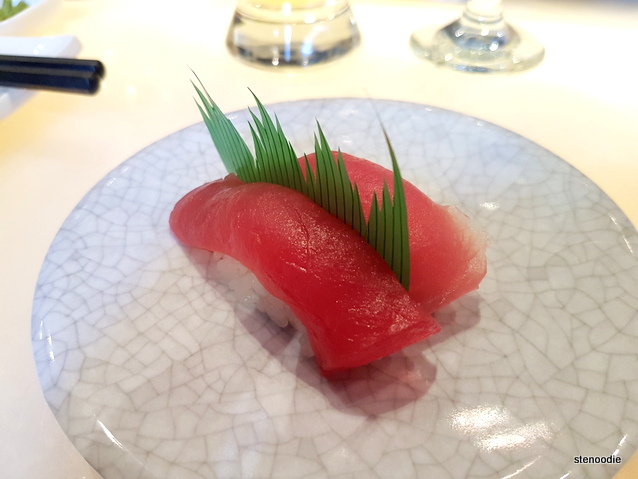 Another second helping of that delicious roll!  (I don’t know the name for this uramaki and I can’t seem to find it on their regular menu…) 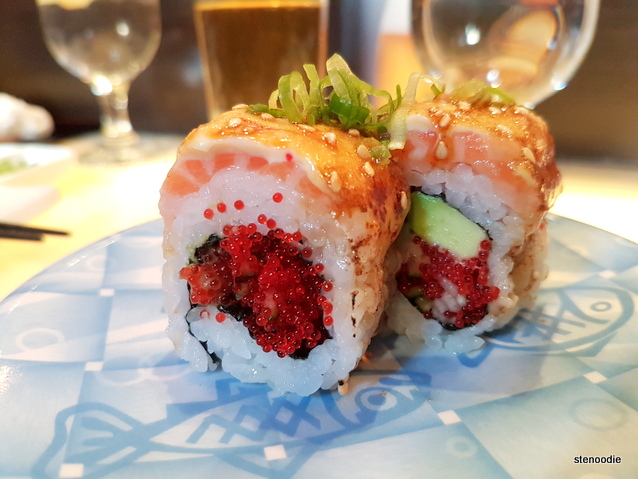 Shrimp nigiri!  Shrimp was also a popular item and we didn’t see this too often or left on the boats for long.  The shrimp was very firm, big, and tasted good.  (And look at that colouring — so pretty.) 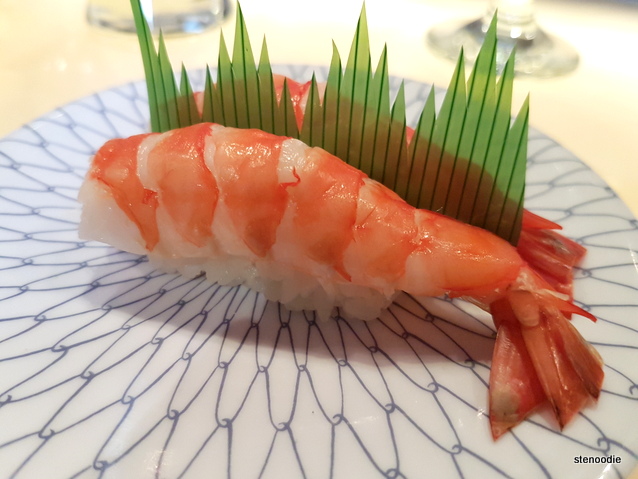 Alas, it was time for us to leave.  We did fit in two dessert dishes though although I think it was really for the novelty of grabbing a “rare” dish.  First, we had the mochi filled with red bean.  It came in three colours and was actually pretty decent.  It wasn’t too dry at all and very squishy. 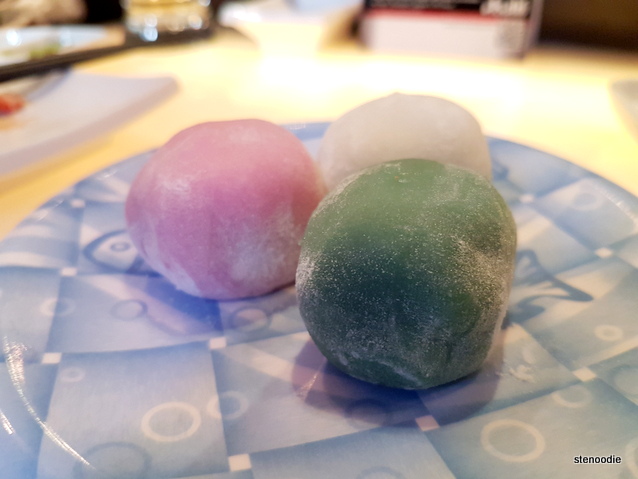 The second dessert that we grabbed because I was like, “Oh!  That looks like a new plate!!” was the Dorayaki, a Japanese red bean pancake.  It was so set up so nicely cut in half with one piece overlapping the other one.  But as Ken said, this was really something you could just get at the nearby Korean/Japanese supermarket. XD  It was good; the soft doughy pancake wrapped around the red bean filling. 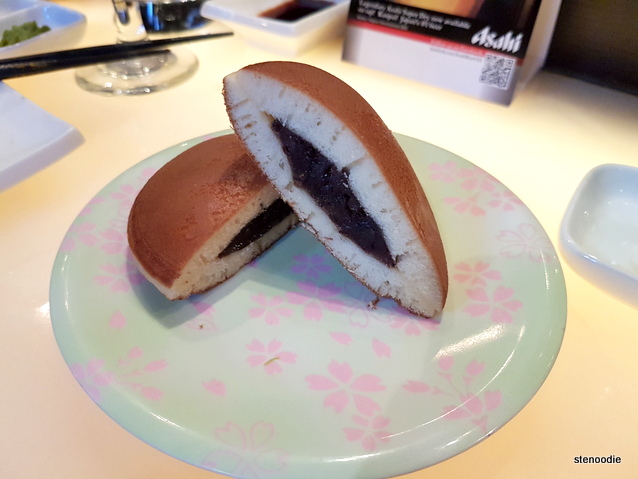 We left happy and satisfied, having tried the only conveyor sushi belt restaurant in Toronto (thus far — unless someone wants to open up a new trending one).  To my surprise, when I was reading Fune Japanese Restaurant’s website, it says they have been operating since the 90s!  Again, so thankful and content that we got to try such a great and fun restaurant. 🙂 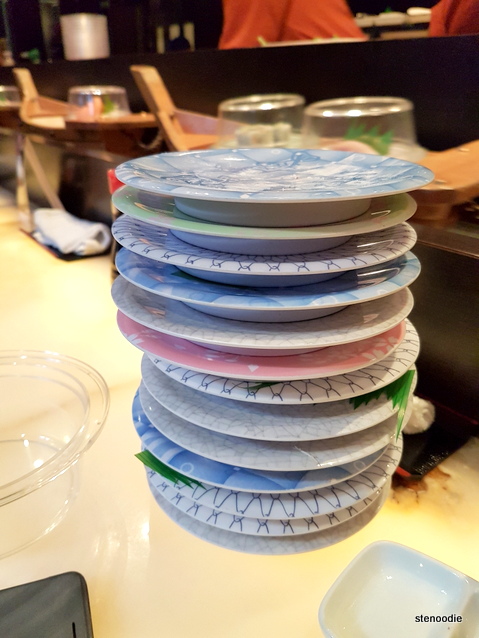 Our damage for the night XP 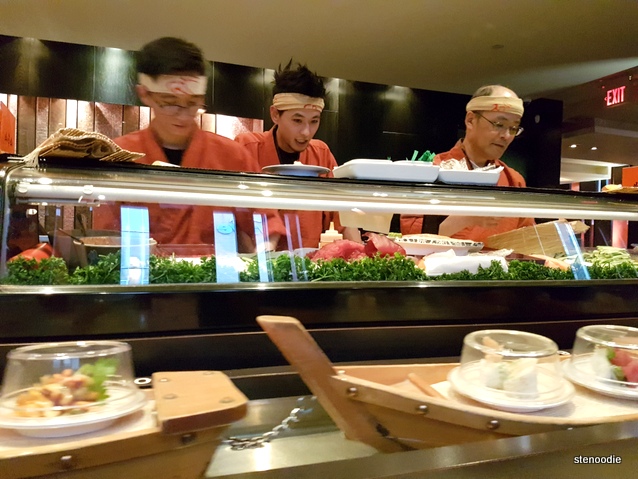 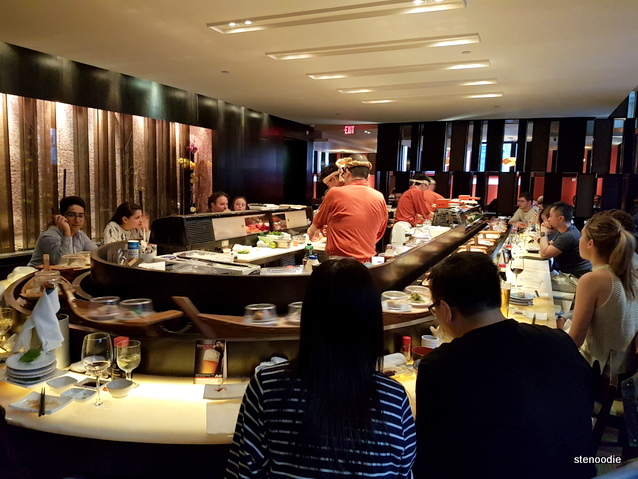 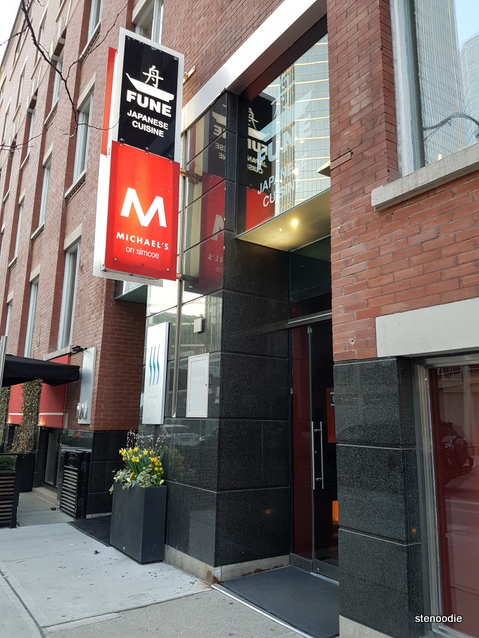 Fune Japanese Restaurant is in the Theatre District

Video of a full round of the sushi boats:

1 Response to Sushi Boats at a Revolving Sushi Bar at Fune Japanese Restaurant!