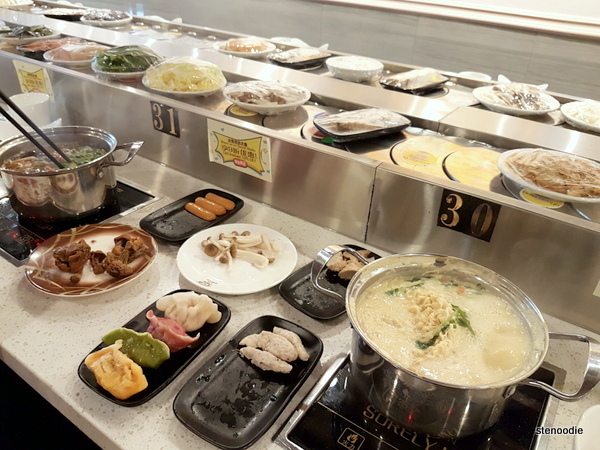 August 25, 2018:  Ever since I noticed the closure of K & K Cafe that previously occupied this space which the current Surely Up Vegetarian Hotpot (素上簽) took over, I was curious about its food and dining experience (but not before mourning a bit about my previously favourite go-to HK style cafe)… but I digress.

I had heard that Surely Up Vegetarian Hotpot had a conveyor belt which served the toppings for the hot pot portion of the meal.  I was very curious to see how it would be like because not only was this the very first vegetarian hot pot restaurant I had dined in but a conveyor belt one at that! 😀  (The only other conveyor belt restaurant I’ve been to in Toronto is Fune Japanese Restaurant.)

Surely Up Vegetarian Hotpot is located at Jubilee Square at Valleymede and Highway 7 (there’s a McDonald’s and Omei Chinese restaurant in the plaza too). 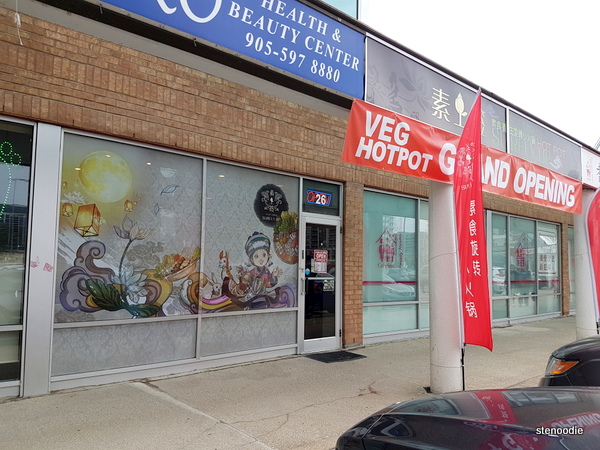 Storefront is not very obvious 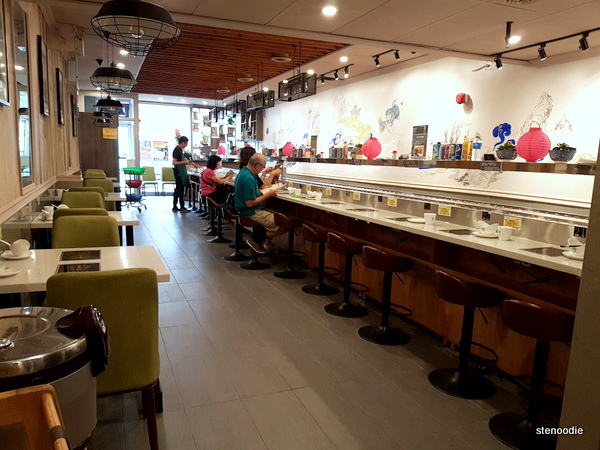 Lots of seating at the conveyor belt

My mom and I arrived right after 11 a.m. on a Saturday morning following our Zumba session.  To no one’s surprise, we were the very first ones here.  We were able to select any seat of our choosing.  There were two staff members and they were getting ready to start the day as we could see.  Inside the kitchen, another staff member was preparing the toppings and ingredients for the hot pot and nothing was out on the conveyor belt yet. 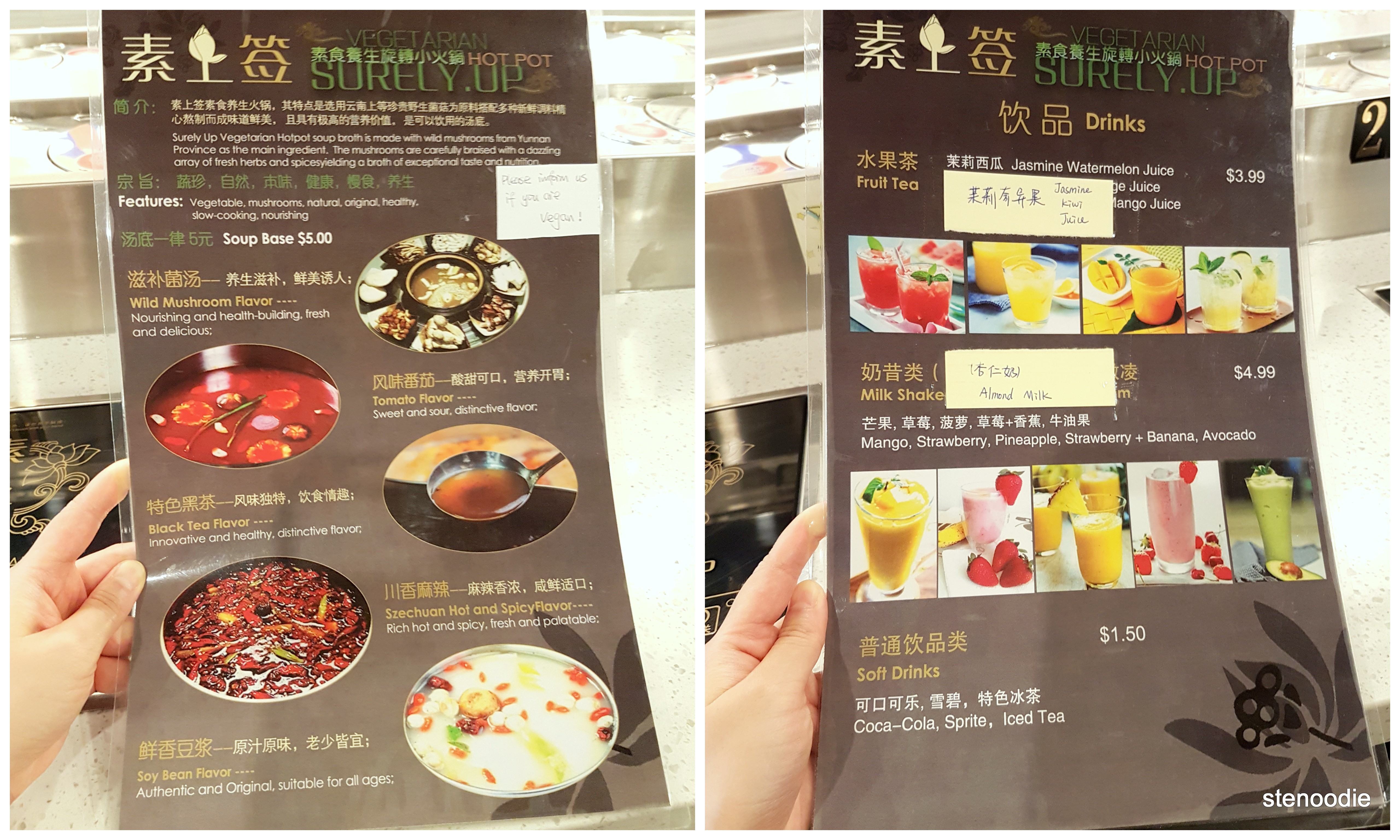 The female server handed us a single laminated menu and from that, we selected two hot pots with a base soup and placed our order.  However, a few minutes later when another party of two arrived, I noticed that the male server gave them a second separate menu in addition to the one we received from which there were more choices.

I called the female server over and immediately exclaimed about the lack of the second menu upon which she did provide to us.  We also retracted our order since we were given the full menu to peruse now.  I mean… that’s not fair to the customer to only receive one menu when there are in fact two to choose from.  It makes the dining experience entirely different!

Thus, we decided to choose the lunch menu which included a House Special Combo with three toppings chosen from the conveyor belt with an additional rice or sweet potato verimicelli.

[Essentially, the cost is per soup base ($5) and then per plate of toppings ($2, $3, or $5).  The lunch combo we ordered is $11.99 that includes one soup base and three plates of your choice off the conveyor belt plus noodles or rice.] 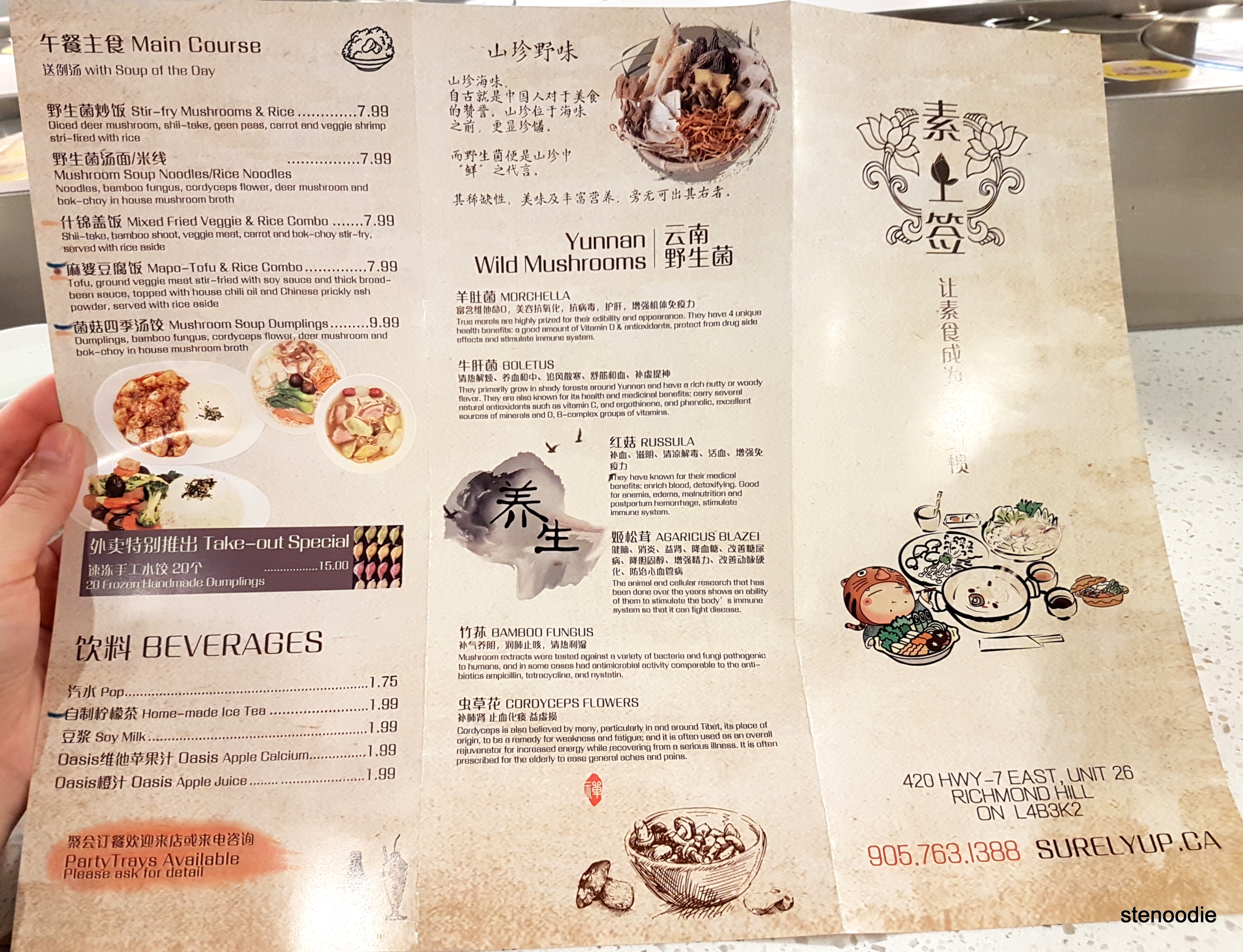 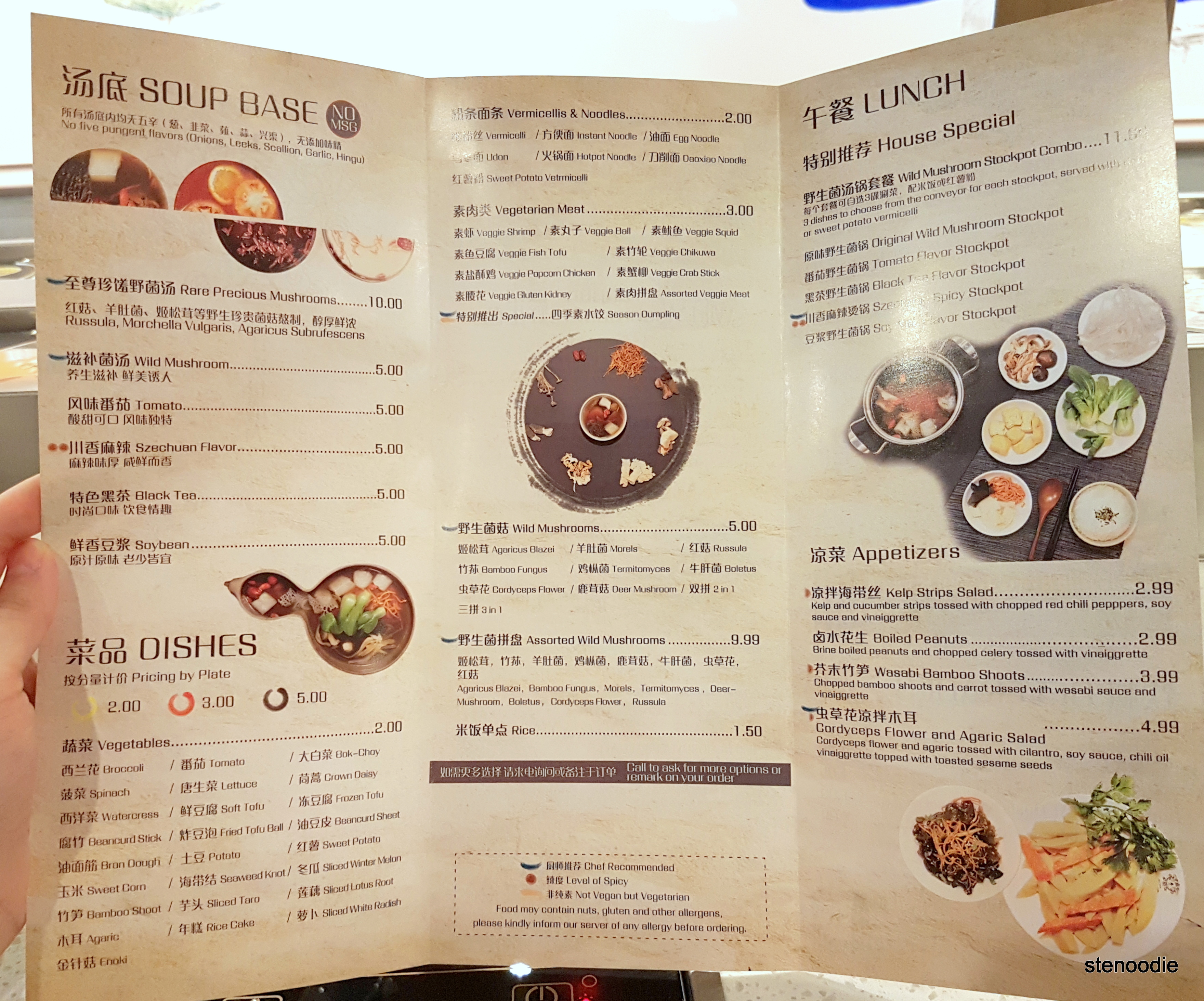 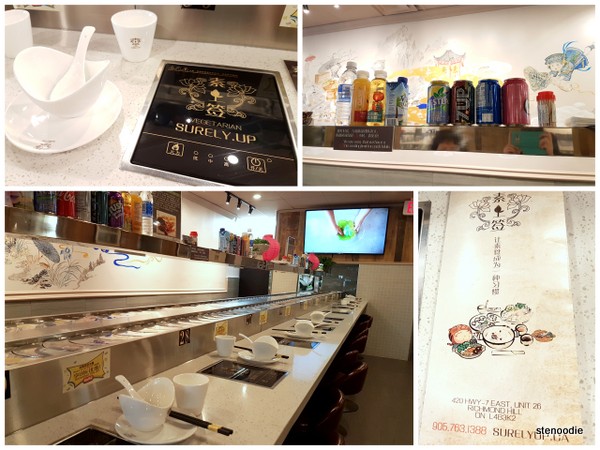 We also ordered the $5 soup base menu (I chose the soybean soupbase).  Any toppings chosen from the conveyor belt would be charged separately.

By this point, the kitchen had prepared lots of toppings and each dish was slowly being placed on to the conveyor belt and being rolled out.  It was adorable and I had to take videos of this. 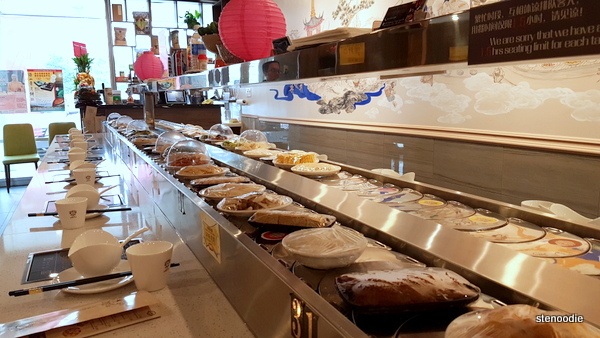 This was so fun!

I liked how each dish was placed on a specified spot where there was a coloured-coded sticker that showed its name in English and Chinese as well as the price of the plate. 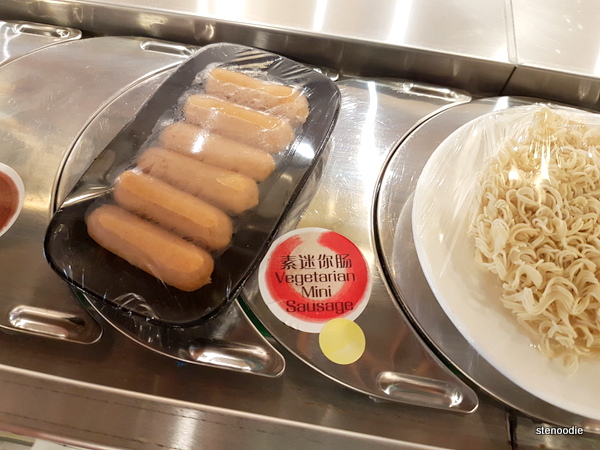 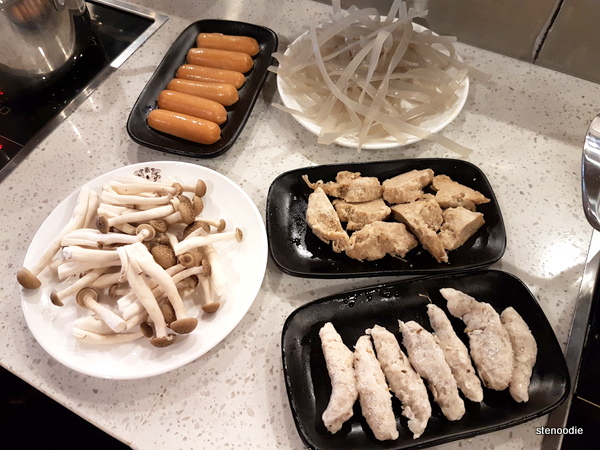 Our two stockpots of soupbases (Original Wild Mushroom Stockpot and Soybean) arrived not long after.  It’s a flat type of stove top where you can adjust the intensity of the heat in three settings.  I found that my soybean soupbase easily overflowed with the highest setting, so I had to monitor it frequently. 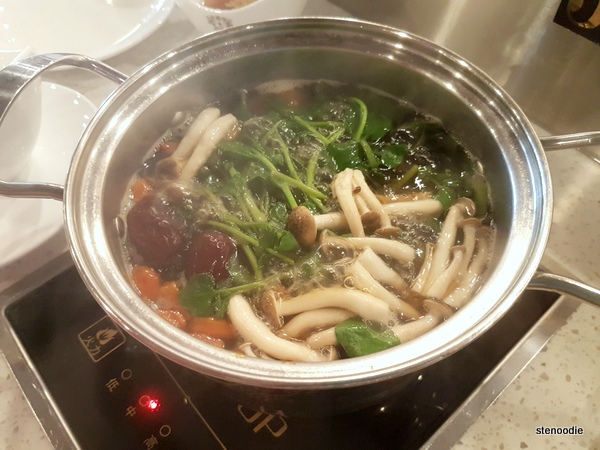 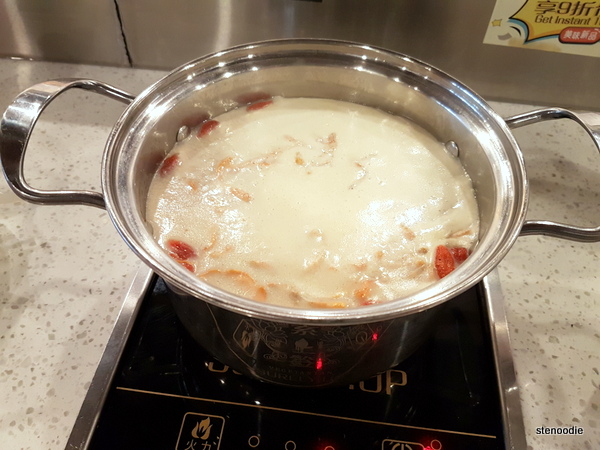 There was a do-it-yourself station for sauces just like at other hot pot restaurants. 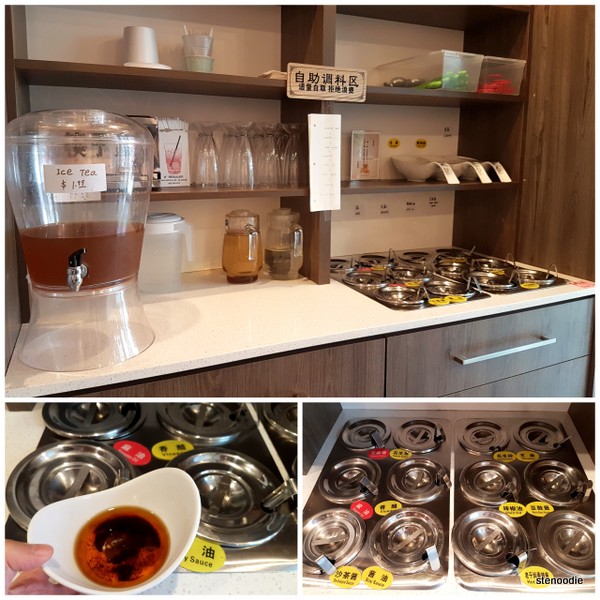 We picked various toppings from the conveyor belt to enjoy (three of which were included with the lunch combo).  I enjoyed the experience and I definitely enjoyed my soybean soup base.  I liked how (when compared to other hot pot restaurants), I felt comfortable drinking all of the soupbase since it seemed healthier and didn’t seem to contain any MSG.  It was a very satisfying meal and the price was moderate for lunch considering it was more of a premium experience. 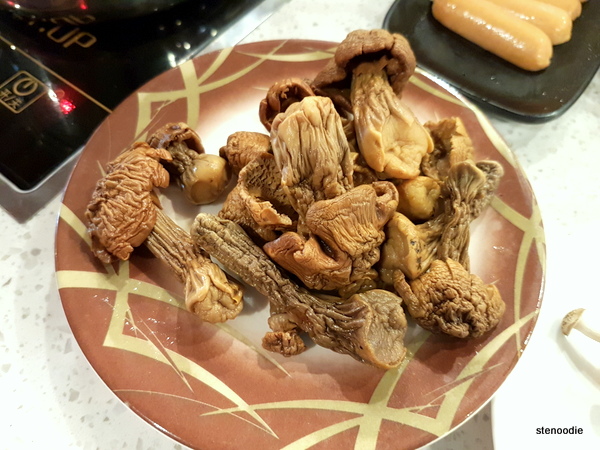 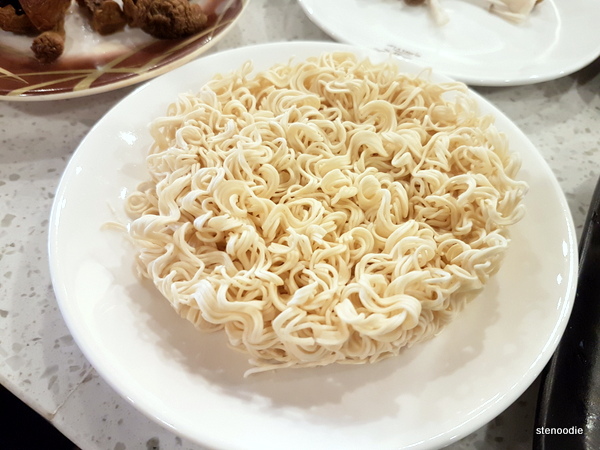 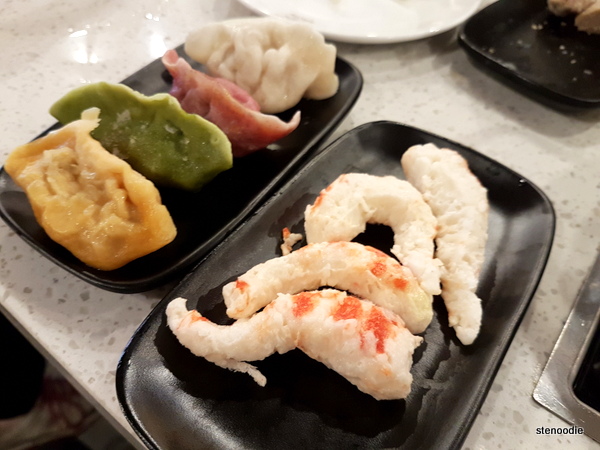 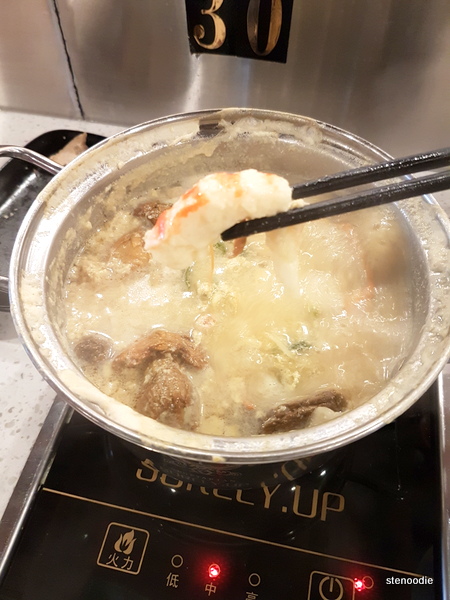 My pot after a lot of toppings being added in 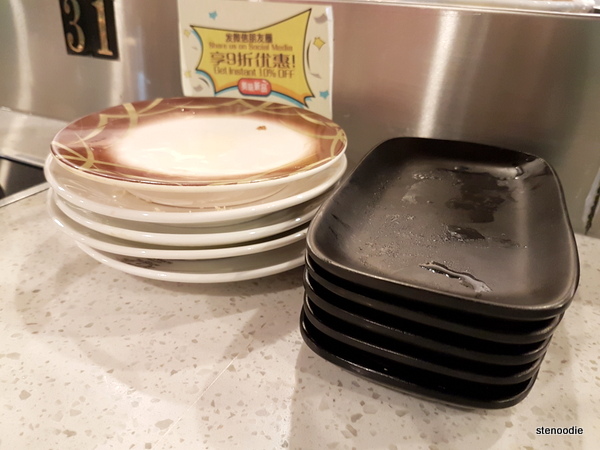 All of our plates at the end of the meal

I liked that their TV screen showed some vegetarian-focused cooking and dining documentaries.  It would be nice to go there just to pig out again on vegetarian eats while watching those shows. 😀

If you share a photo on social media, you receive 10% off their regular items!

If you are vegetarian or know someone who is, this is definitely a great place to check out for lunch or dinner.  There were a lot more customers in the restaurant afterwards too.  (Surely Up also has vegan options if you inquire about it.) 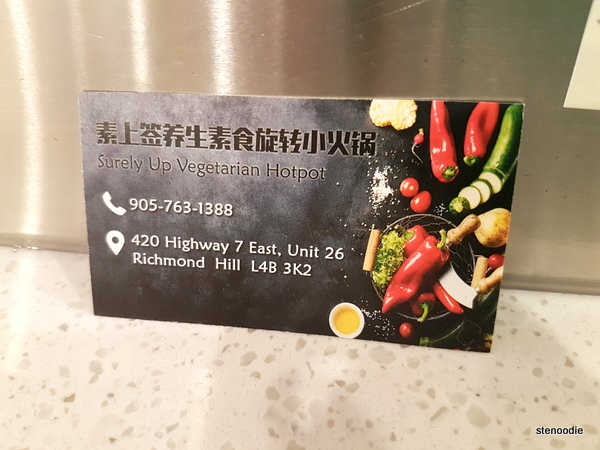