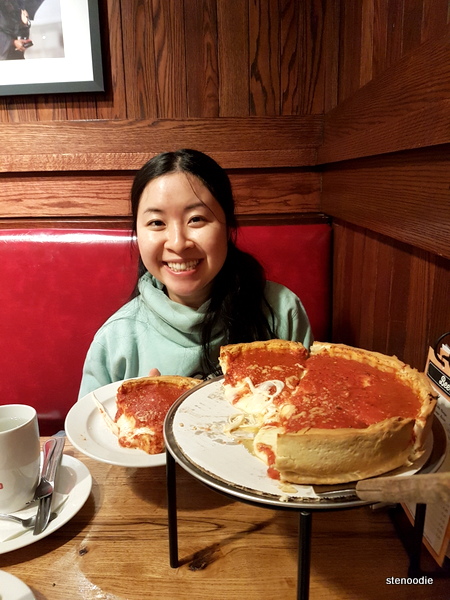 Yay! Finally got to try an authentic deep dish pizza! ^_^

Today was the first day of Chicago!!! ^_^  My last trip of 2017 :D.  This was my second time visiting Chicago.  I had previously visited when I was about 13 years old — I remember visiting the Shedd Aquarium and whale watching which was amazing.

We took the early 7 a.m. Go Train to Union Station and then the Porter shuttle bus to the Billy Bishop Airport.  This was my first time taking the airplane through Toronto’s only island airport.  We went through the walkway which actually was a ferry route before to get to the airport. 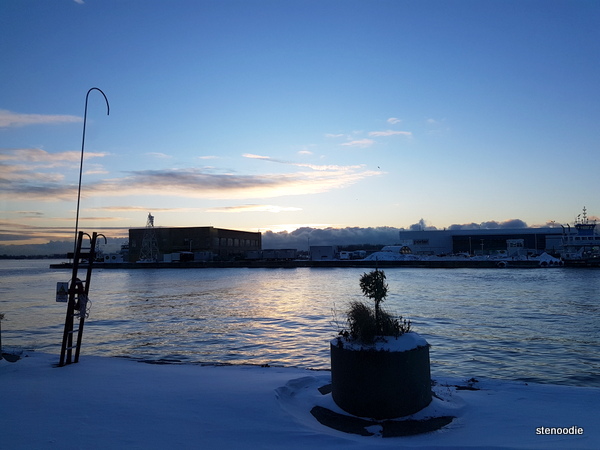 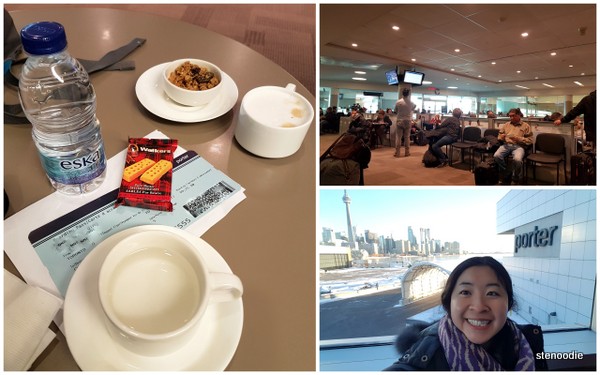 Once there, we checked in and went through security like the regular airports and then waited at the lounge for our 9:45 a.m. flight.

There were way more people than I thought at the waiting lounge.  The lounge had lots of chairs and tables and sofas too as well as complimentary drinks and snacks too!  It was nice.

The plane ride was smooth and without hassle.  We were served drinks in actual glasses and given a snack too (a choice of 3 things). 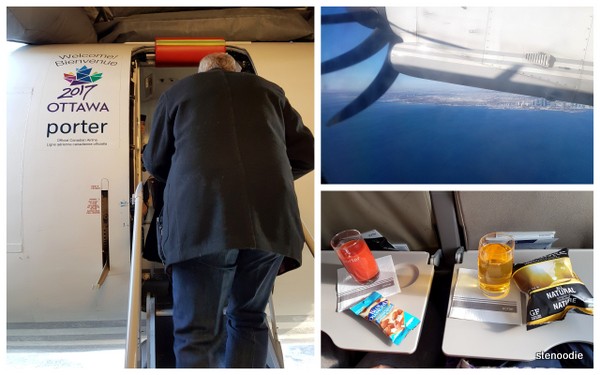 We arrived in Chicago at 11:35 a.m. which I realized that the states don’t actually take part in daylight savings anymore which was a surprise to me.  We thus gained an hour in time :).

After getting our carry-on luggage and going through customs, we hailed a taxi and arrived at our hotel, Club Quarters Hotel, Central Loop.  We settled in and then set off for lunch. 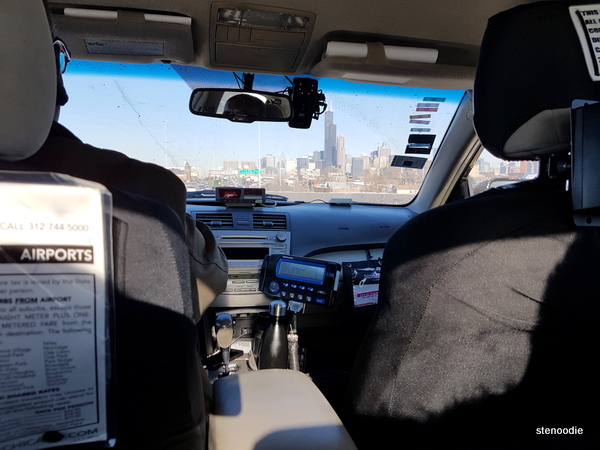 Taxiing to the hotel in Chicago 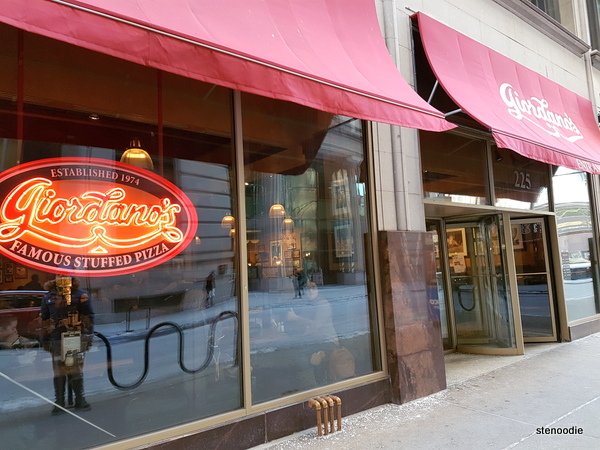 Giorando’s has many locations in Chicago

First thing on my list?  Chicago’s famous deep dish pizza!  We headed to Giorando’s (223 W. Jackson Blvd) which was just four minutes away from our hotel for lunch.  It was bitterly cold.  It was like -20 with windchill.

We arrived at Giorando’s and prompted got seated at a table for two.  Our server was warm and smiley.  We ordered the small cheese deep dish pizza and a house salad to start. 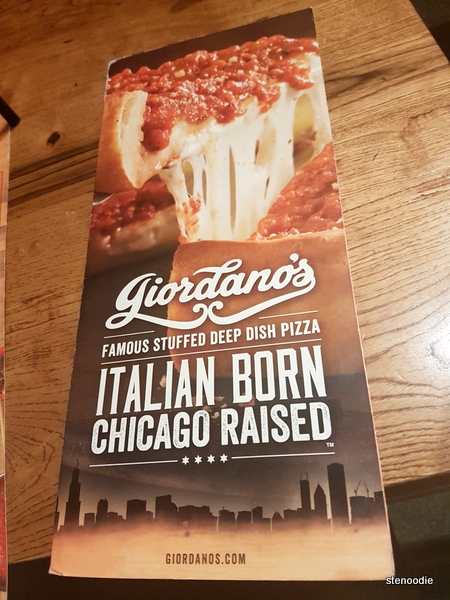 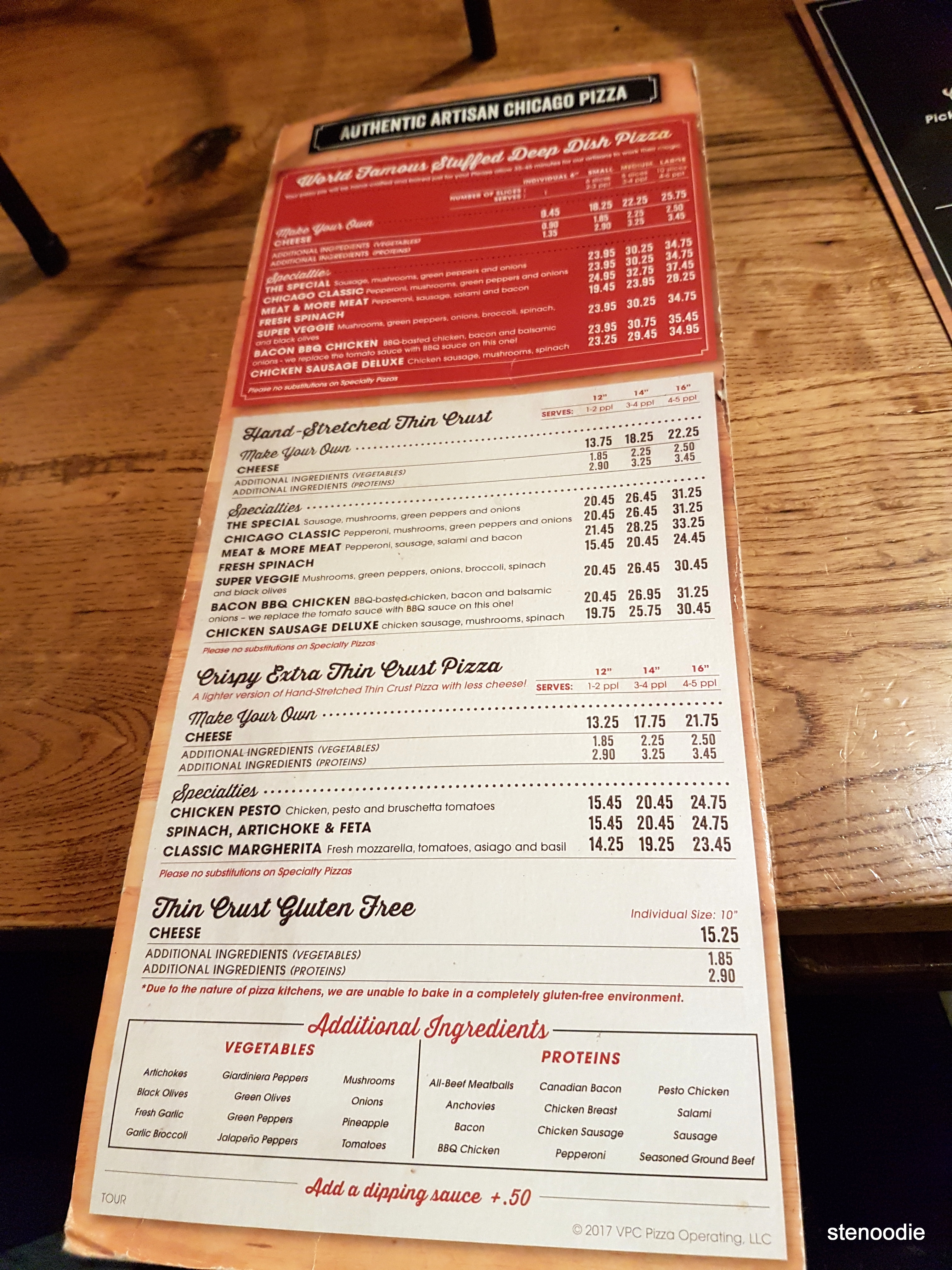 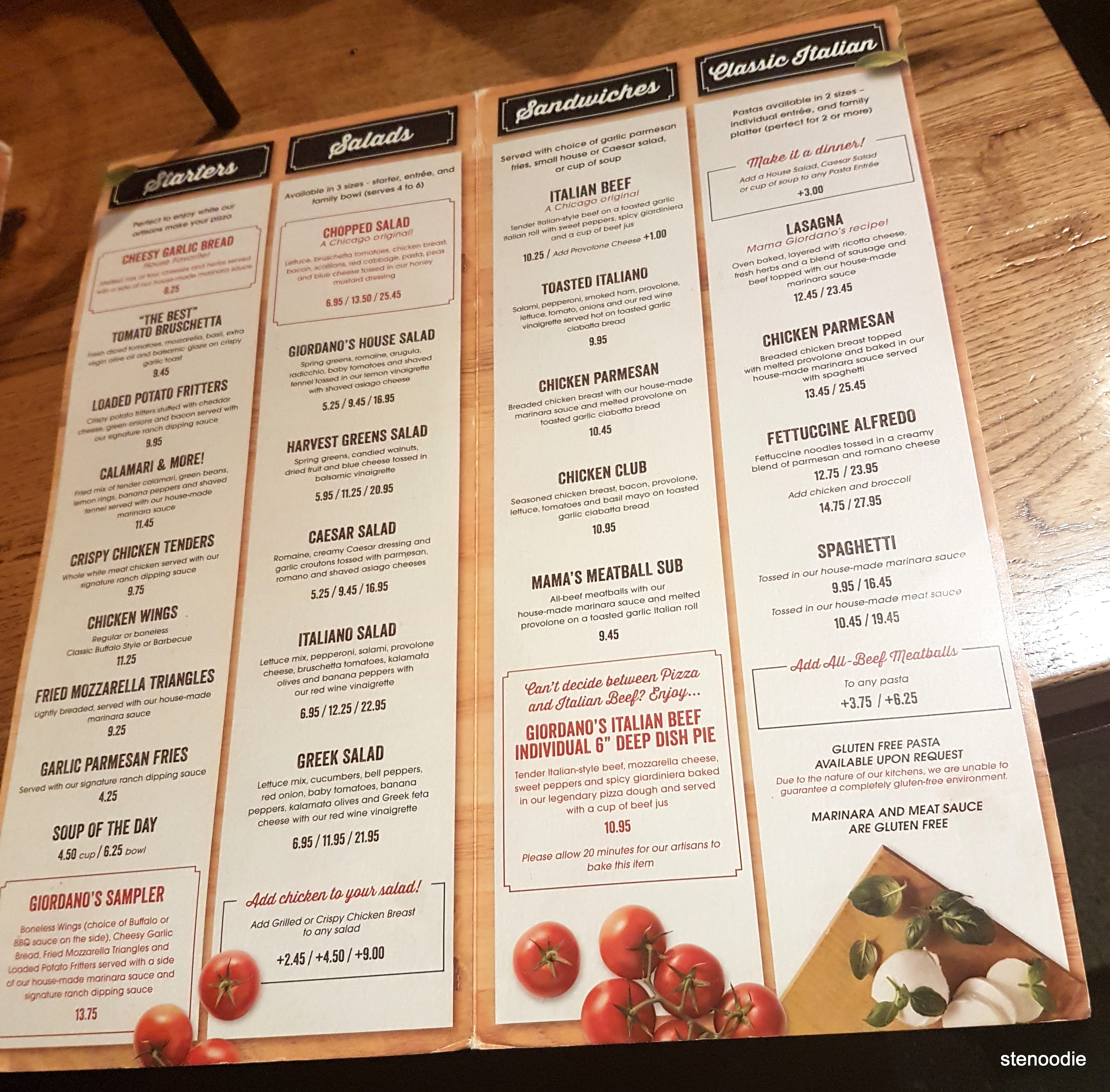 Starters, salads, sandwiches, and other dishes 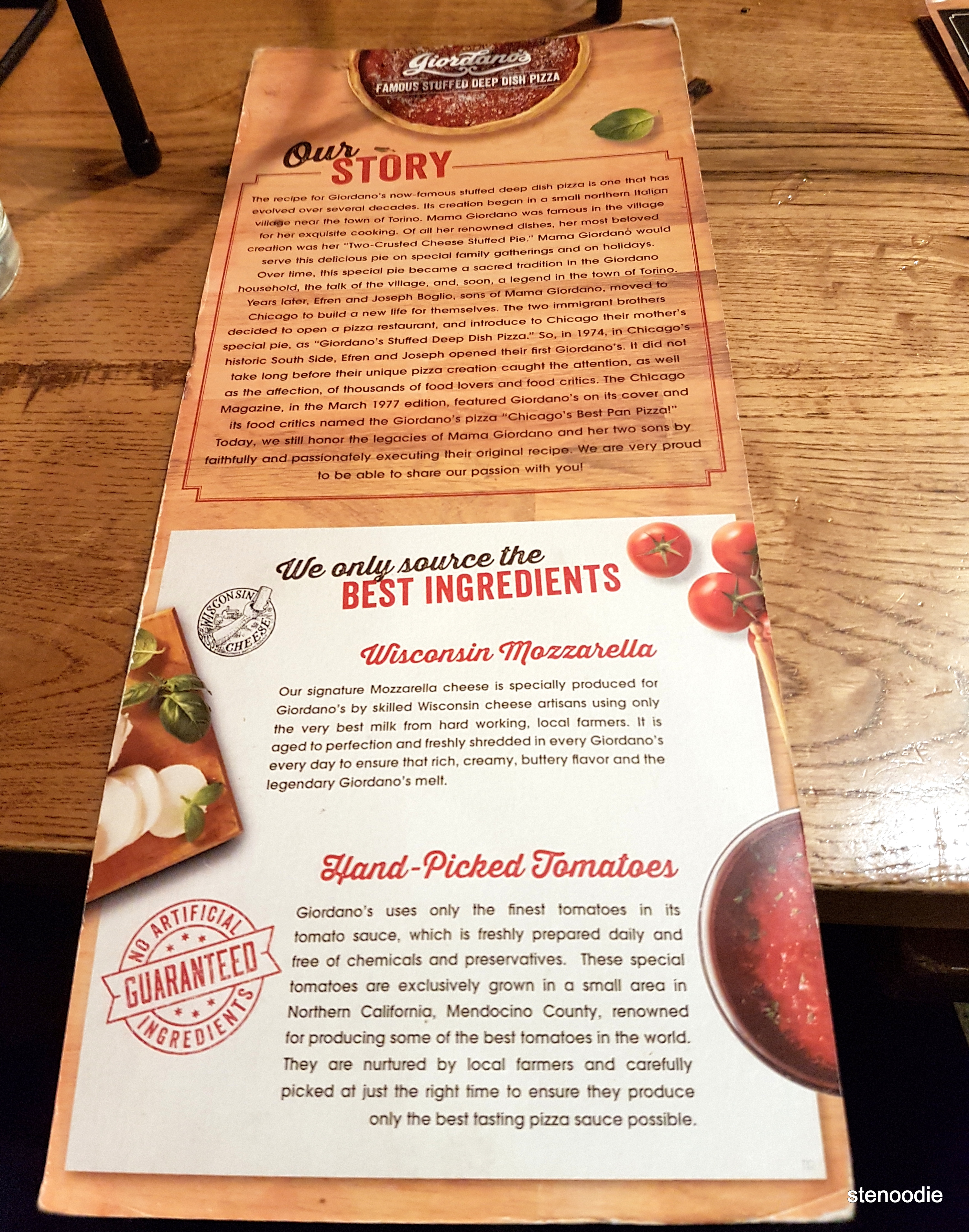 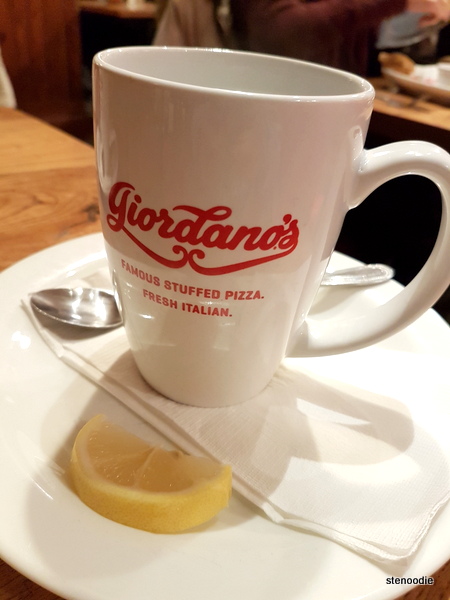 My usual hot water and lemon 🙂

The Giordano’s House Salad was soooo good!  I loved the shaved asiago cheese in it.  It was like a cross between a tasty Caesar salad and a house salad.  I gobbled it up. 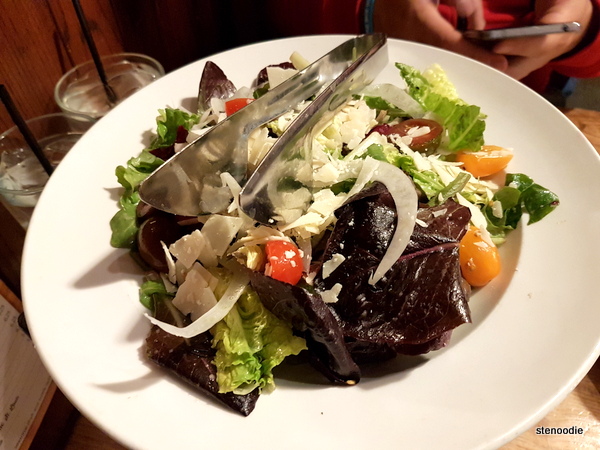 The deep dish pizza took around 30 to 45 minutes to arrive since it was freshly made.  I was so excited to try it and kept looking around the corner at the server to see when ours would arrive.

Finally it did arrive and the server helped to serve us. 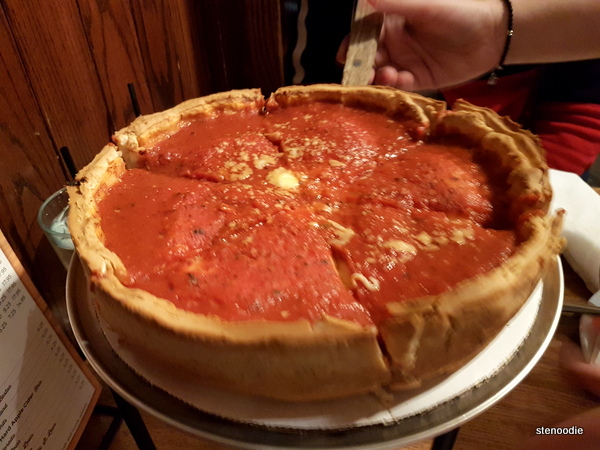 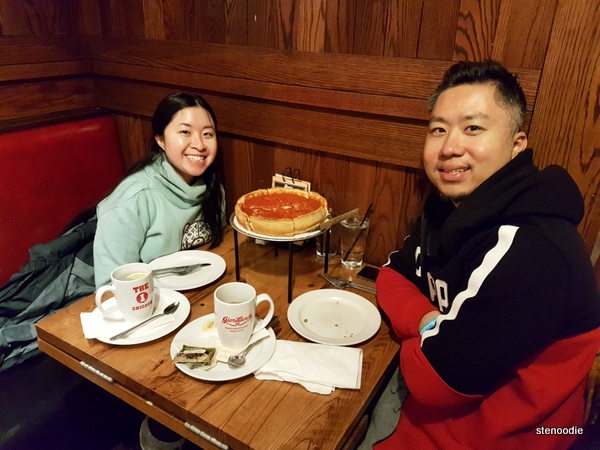 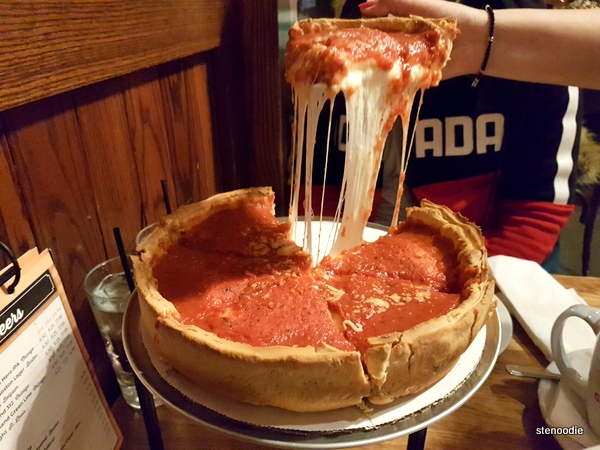 The deep dish was incredibly cheesy and had stringy cheese that was to die for.  After eating this, I will find any other cheese pizza lacking in ingredients basically. 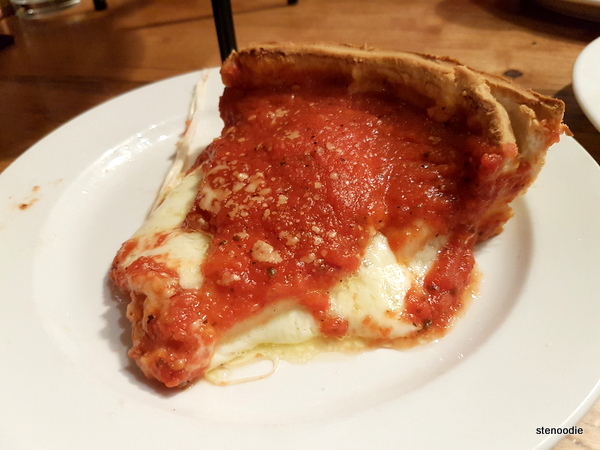 I really liked the tomato sauce on top of it too.  The crust was like a pizza dough, firm yet hard and moist at the same time.  It tasted like comfort food to me. 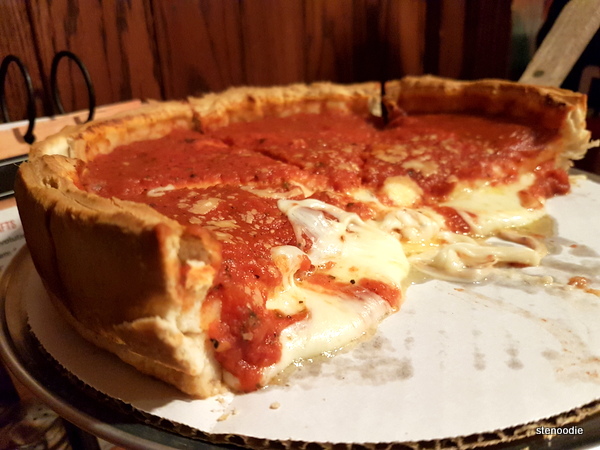 After the first slice, I was so full already from the heavy cheese and carbs.  I did fit one more slice in and then we packed the remaining two slices for later. 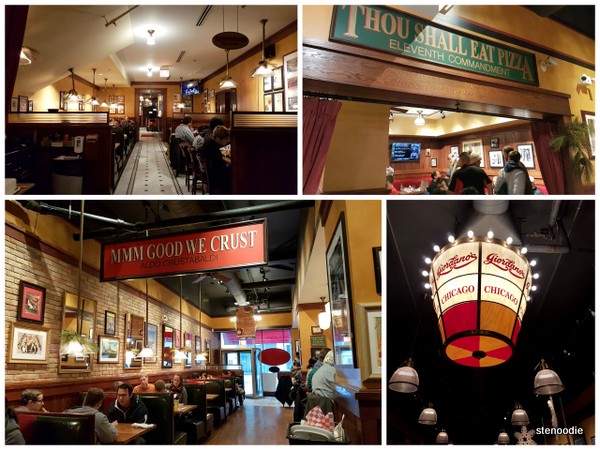 Views from inside Giordano’s 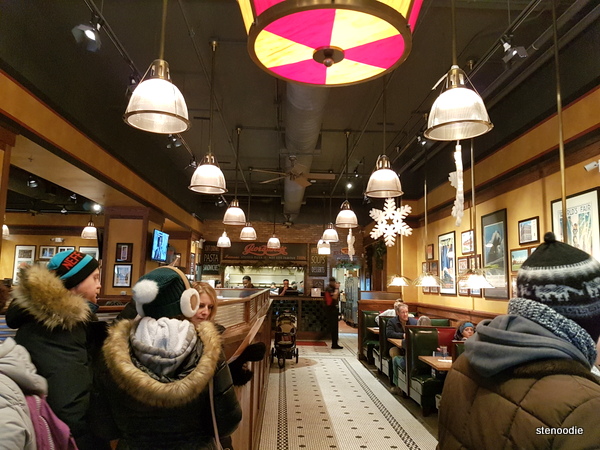 We were so lucky to get a table without have to wait at all. By the time we left, there was a line-up at the door!

We headed to the Willis Tower afterwards to see if we could go in but the line-up for the Skydeck was 2.5 hours.  We left upon hearing that.

We visited a McDonald’s too to compare what items they sold and they actually didn’t have too many unique items except a 20 McNugget for $5, crispy buttermilk chicken tenders, and double McFillet, etc. but nothing unique like McWings that Ken had on his last visit here.

Then we headed back to the hotel and checked out their amenities and club members’ lounge which had a huge space for working and playing with a drink and snack station too.  It was so nice!  We checked out their gym too and it was huge with no one there too.

For dinner, we headed to Natives Foods, just 2 minutes and literally around the corner from our hotel for a vegetarian/vegan dinner.  Since we had had a filling and heavy lunch, it only made sense to have a green veggie dinner :).

We arrived at Natives Food Café (218 South Clark Street) around 8 p.m. after dealing with a room issue with the hotel staff.  Natives Food Café was going to close at 9 p.m. and the staff were already putting up all the chairs on the tables and getting ready to close for the day.

I loved the unique selection of plant-based food that they had in Mexican and American fusion style dishes. 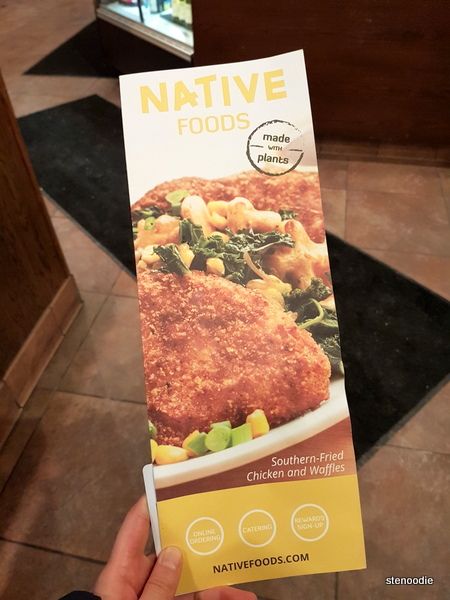 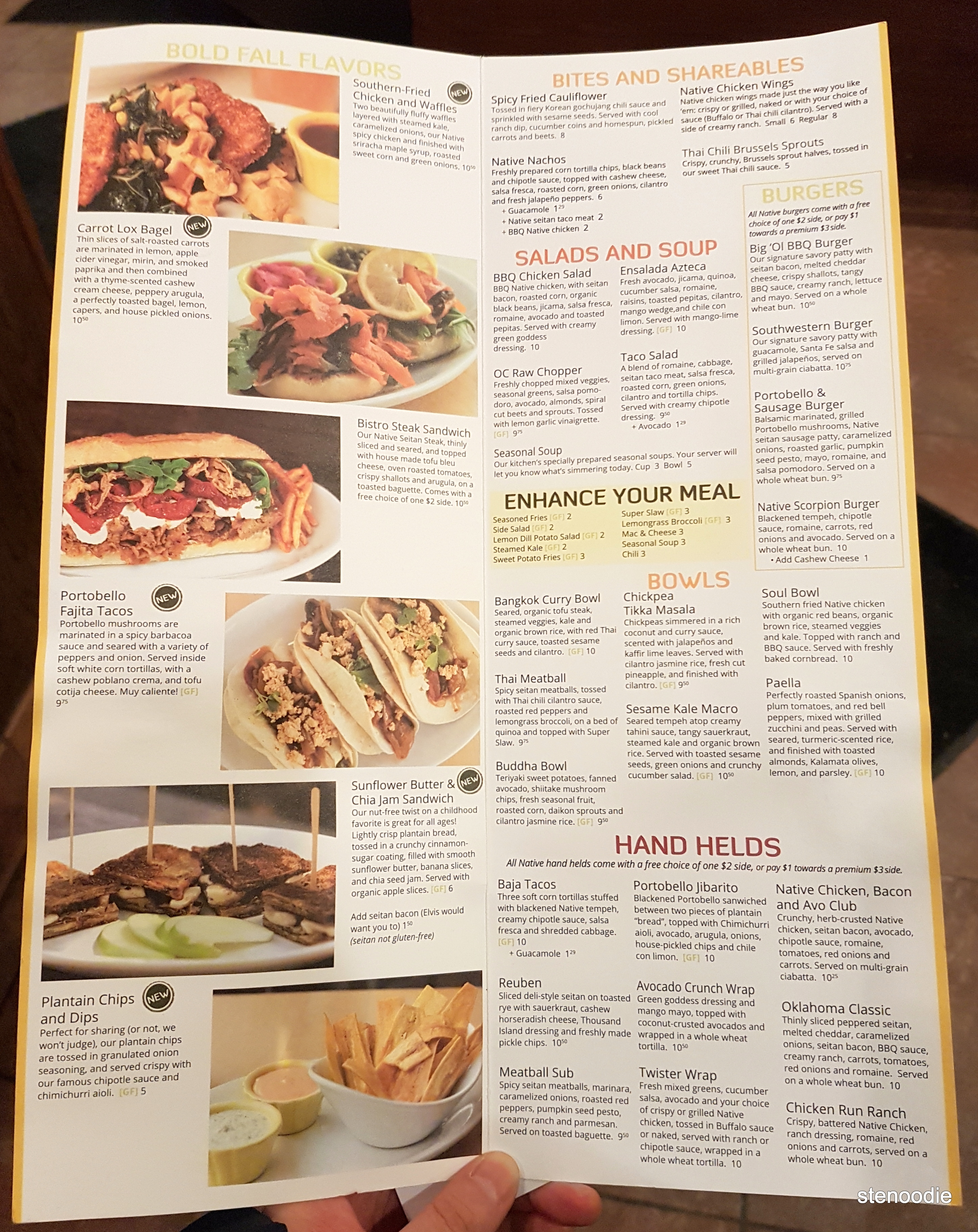 For some reason, we also got the items BOGO!  It was such a good deal to get the food for buy one get one free 😀 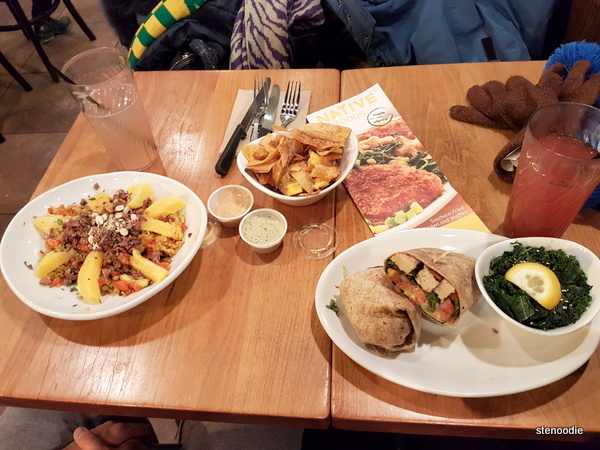 Our table full of food

Thus, we got two drinks: a Lavender Lemonade and the Watermelon Fresca which were so good and true to its taste.  It didn’t taste like artificial flavouring at all!  I was so impressed and enjoyed the Watermelon Fresca so much. ^_^  It was refreshing and good to have to eliminate the heat from my body (to prevent yee hay). 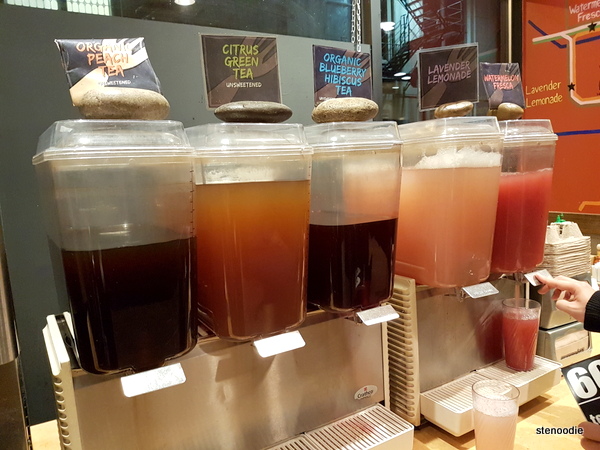 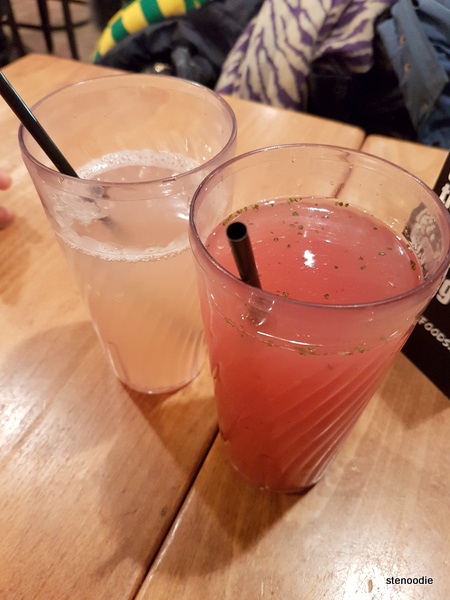 I got the Twister Wrap which had salsa, avocado, seitan grilled chicken, ranch sauce with a side (I chose the steamed kale).  I liked it!  It was a good portion of two wraps and fresh ingredients.  I loved the grilled seitan chicken which is like tofu but texture wise did seem like chicken.  It was a satisfying and guilt-free wrap :D. 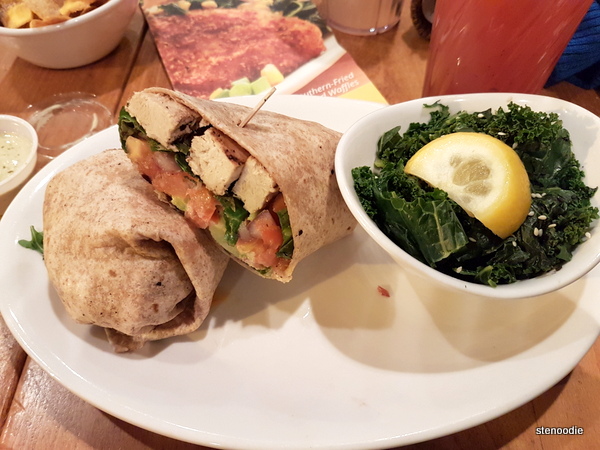 Ken got the Paella which had lots of veggies like bell peppers, kalamata olives, almonds, and more.  The rice was infused and scented which made for a hearty meal.  It was pretty good too. 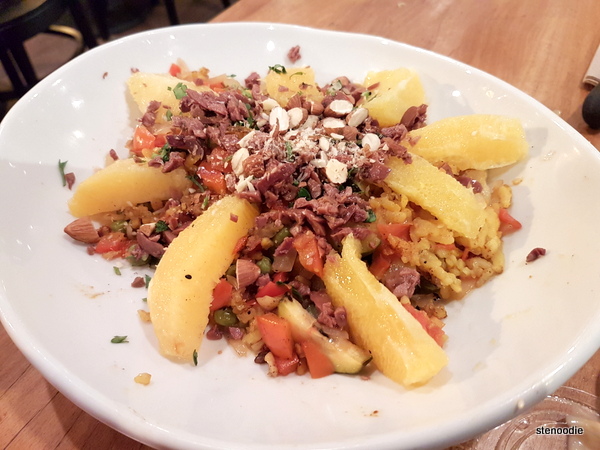 Ken also ordered the Plantain Chips and Dips.  I really liked how the chips were dusted with onion seasoning! 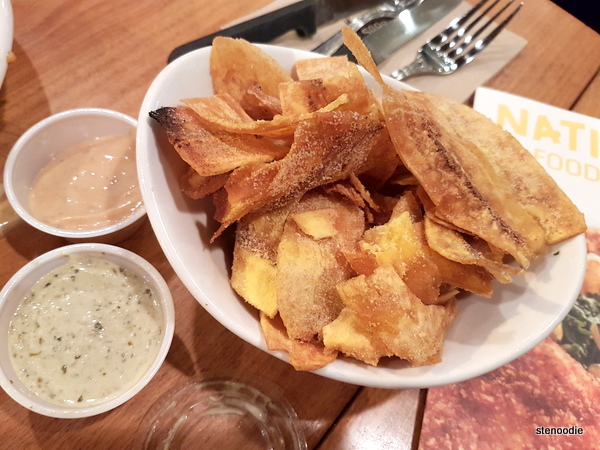 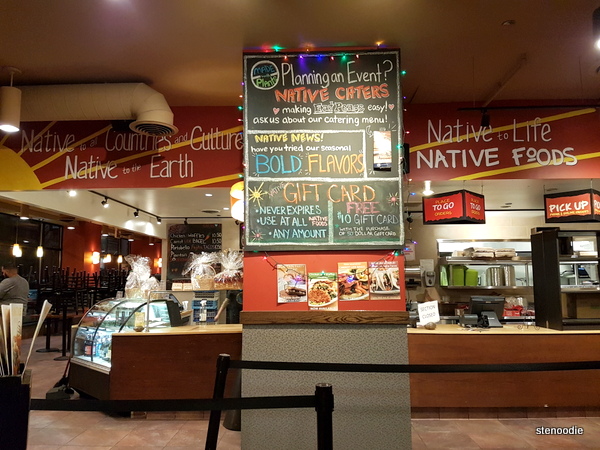 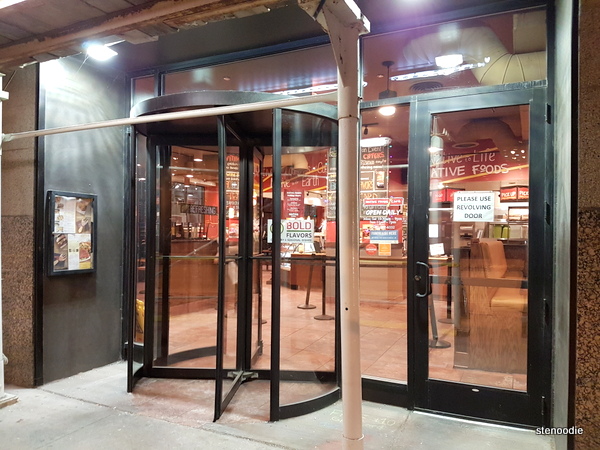 We spent the rest of the night playing chess in their lounge downstairs in the lobby.  What a great first day in Chicago! ^_^