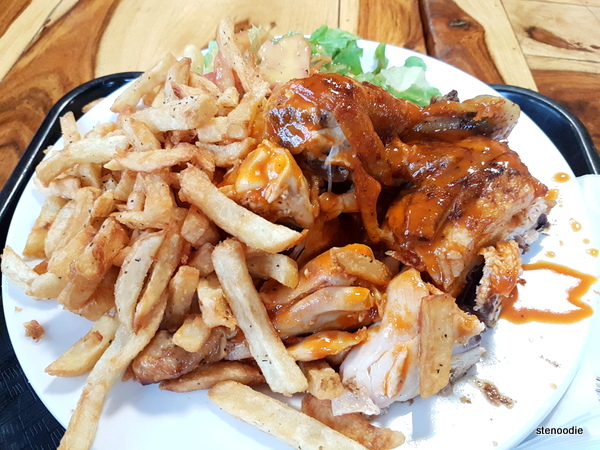 We started our road trip to Montreal bright and early.  I purposely wanted to get a head-start on the drive because we were driving there during the Civic Long Weekend and I would have despised having to wait unnecessarily in stop-and-go-traffic.  It already helped that we were leaving on a Friday, but I was still paranoid about the traffic congestion so by 8 ish a.m. after a small breakfast at home, we were on the road and headed to Montreal! ^_^

I had been to Montreal multiple times before this — with family on a Chinese tour bus trip and with a friend to travel on our own and on a network marketing related trip.  This trip for Ken and I was intended to be a foodie trip with various restaurants and places that we wanted to eat at and visit. 😀 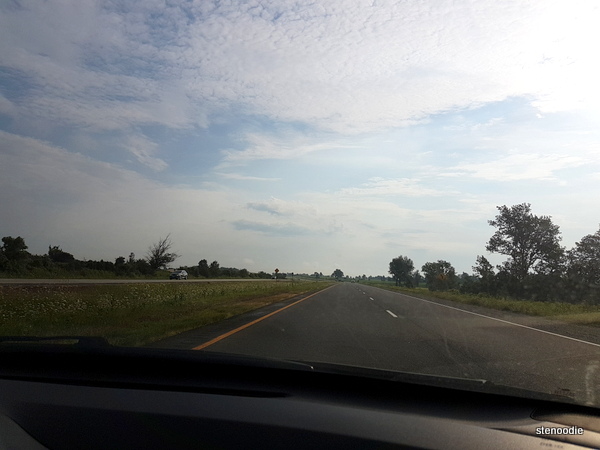 Along the way, we decided to stop by Prince Edward County (732 Closson Rd, Hillier) to see the lavender fields.  It was all the rage this summer and I had seen so many friends’ social media feeds filled with the purple scented flowers.  Prince Edward County was in the east side and since it was kind of on the way to Montreal, we re-routed the GPS to take a look.  I had never seen any lavender fields up to this point and was pretty excited.

We got there at 10:30 a.m. and behind the little house that operated as a souvenir shop, there was a whole field of lavenders.  Unfortunately by this time, early August, was already the end of the lavender season and about 60% of the flowers were already picked and weeded out.  Nevertheless, it was still a really scenic and fragrant field to see.  The lavender flowers smelled so good!!  Lavender is a calming flower and is one of my favourite scents. 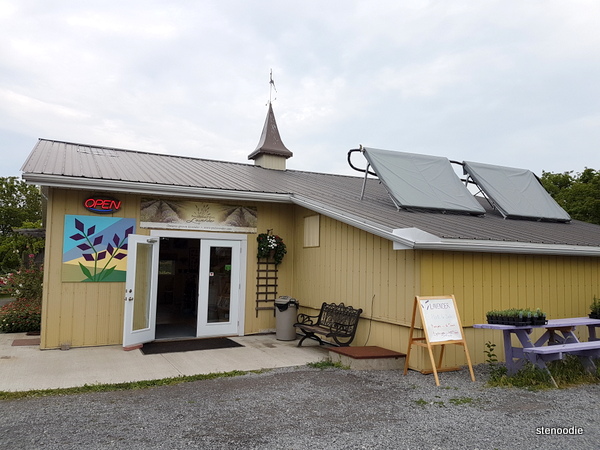 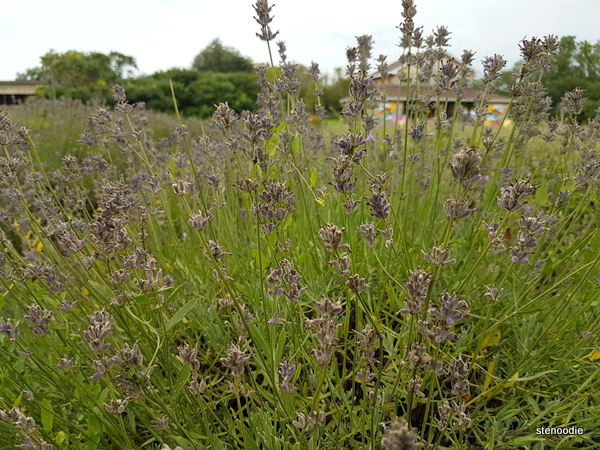 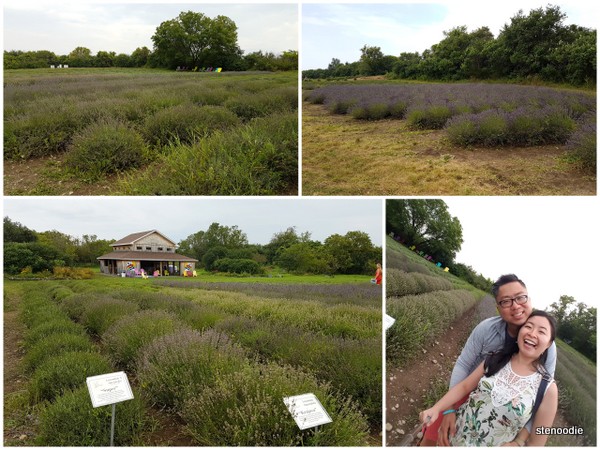 It smelled amazing there 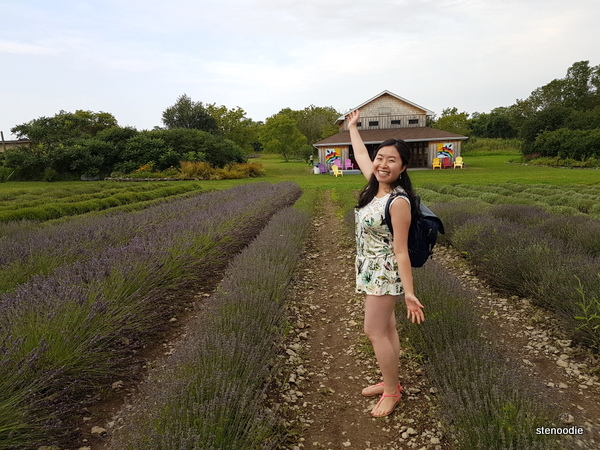 My first time at a lavender field! 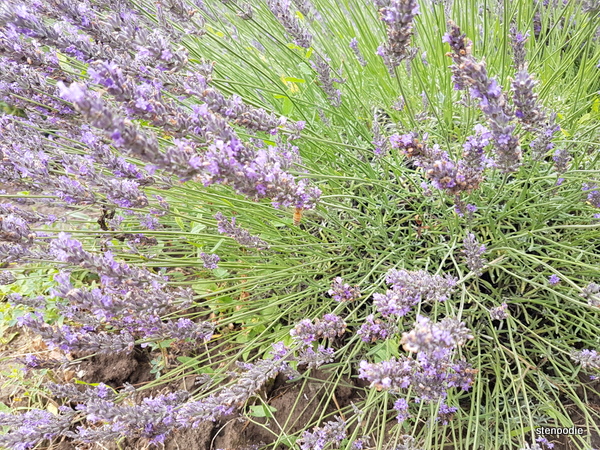 After taking a look at the main field and a smaller field that had brighter blooms, we popped into the souvenir shop to see what was inside.  They had lavender items of soap, essential oils, and even lavender vinegars, nougats, and various other items for sale.  They had lavender gelato as well and even though I was curious about lavender ice cream (again after seeing it on fellow social media feeds), we didn’t feel like having it at that time and continued onwards to Montreal.

By this point, it was lunch time and our road trip was stretching on longer than I thought.  We stopped into an ONroute station along the 401 highway and had lunch.  I was craving the Whooper burger from Burger King.  This was the first time I tried the Chicken Fries from Burger King too.  They were pretty good!! 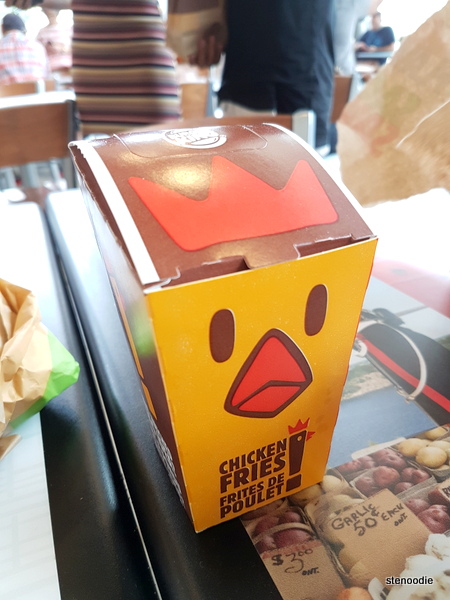 We finally arrived at our hotel, Quality Hotel Midtown, at 5 p.m. and checked in and unloaded our luggage.  Then we walked to the Plamondon subway station which was rather close to the hotel — about a 10-minute walk — and commuted to the Mont Royal station in search of our first foodie spot.  We wanted Portuguese chicken for dinner! ^_^ 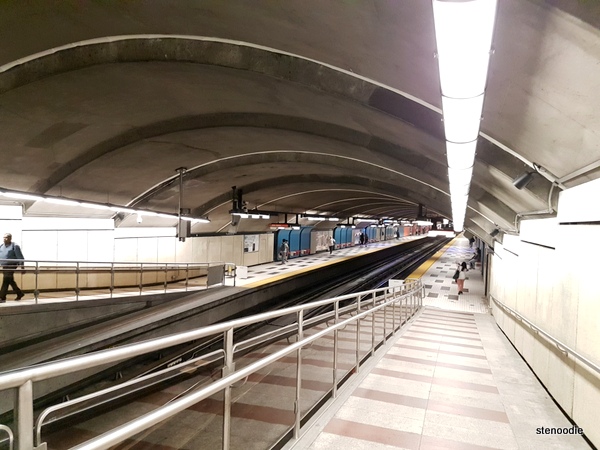 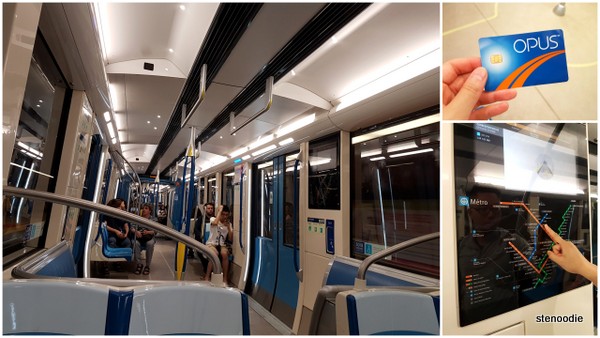 Not my first time riding the Montreal subway! 🙂 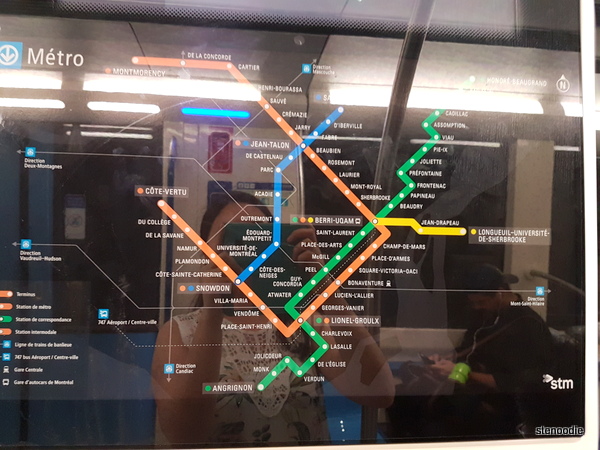 We found Ma Poule Mouillée (969 Rachel St E) and went to the end of the line to queue up to try their coveted Portuguese chicken.  I was recommended this place by my friend who said that a line-up was pretty much expected.  The line-up started from inside the restaurant and stretched to the outside of the doors and to the sidewalk! 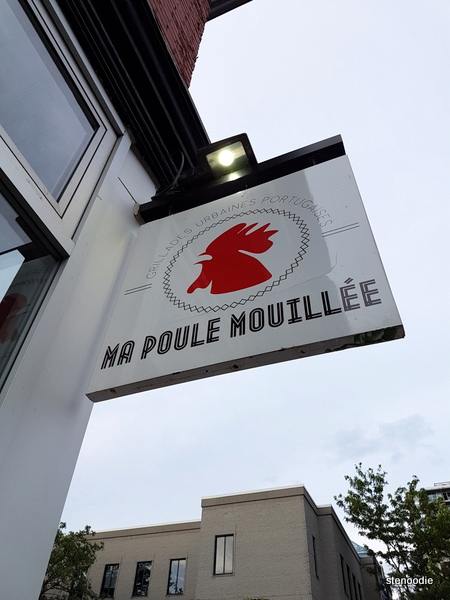 Yay! Made it here! 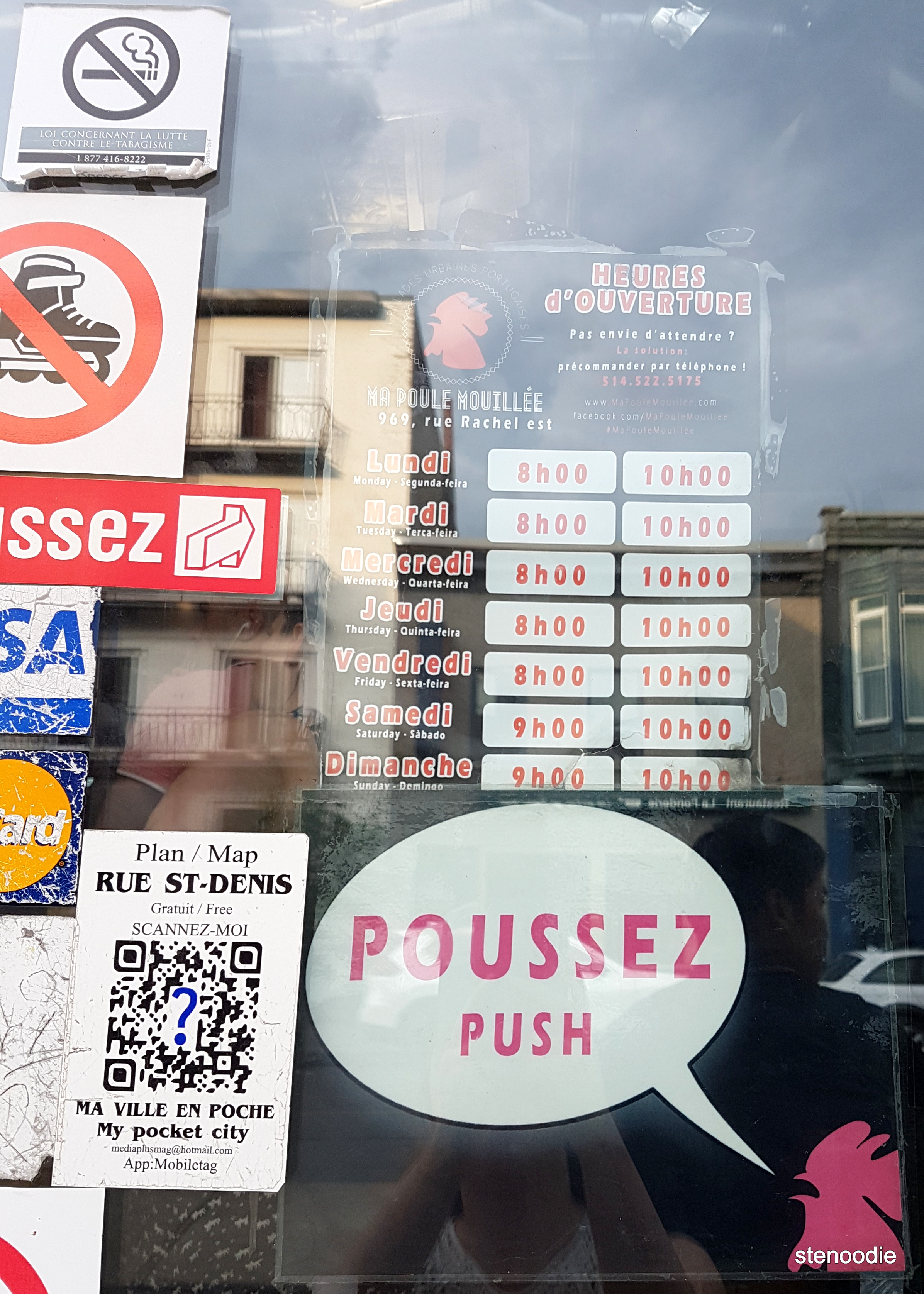 Their hours of business

Luckily, we didn’t have to wait too, too long and soon we were within the doors and able to see the menu.  After stepping food into the restaurant though, it still did take some time to order.  The place wasn’t incredibly big and we thought it would be a better idea if I grabbed a table first while Ken got the order.  The tables were in short supply at this restaurant! 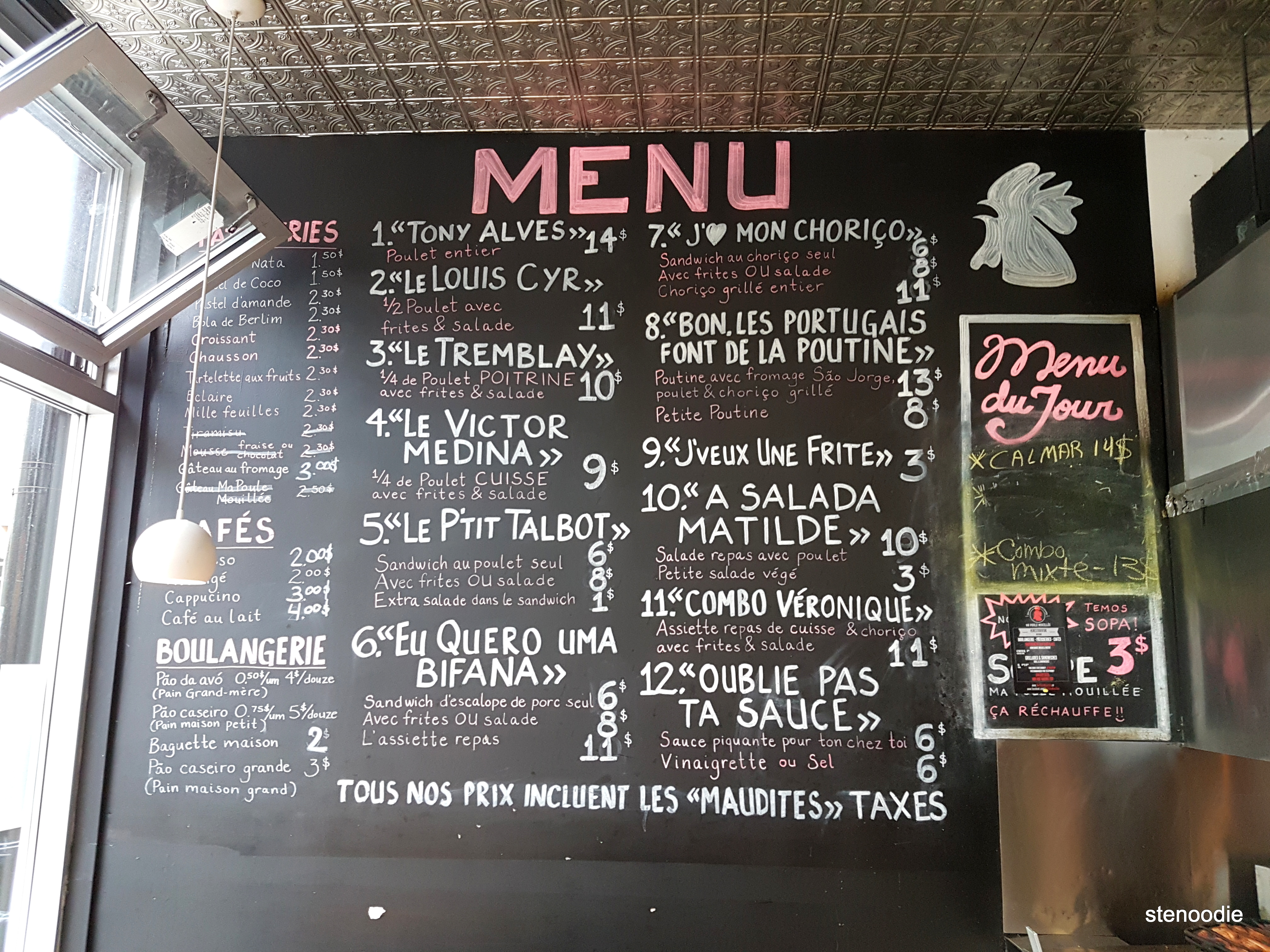 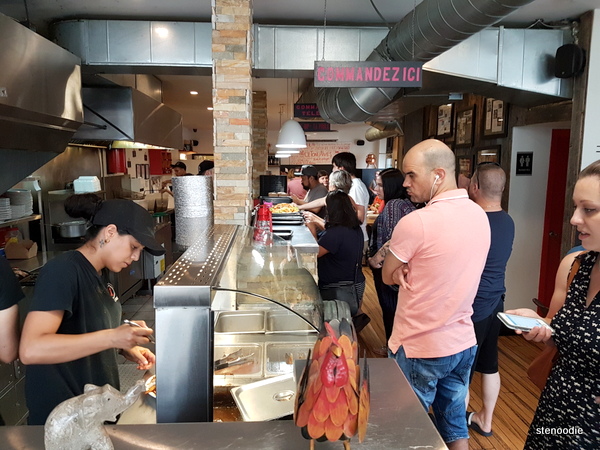 It was so busy inside 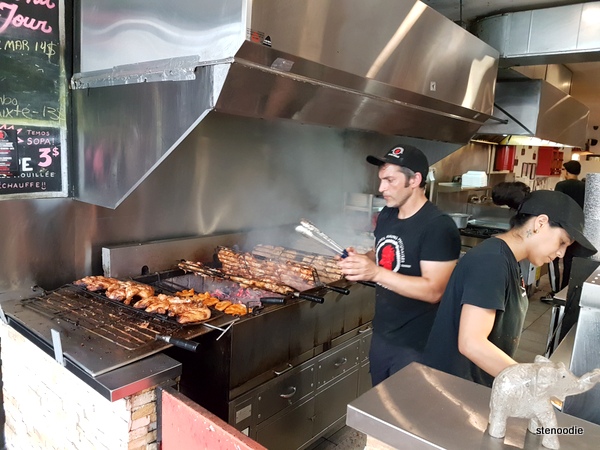 The gorgeous rotating spit of chicken and sausages! 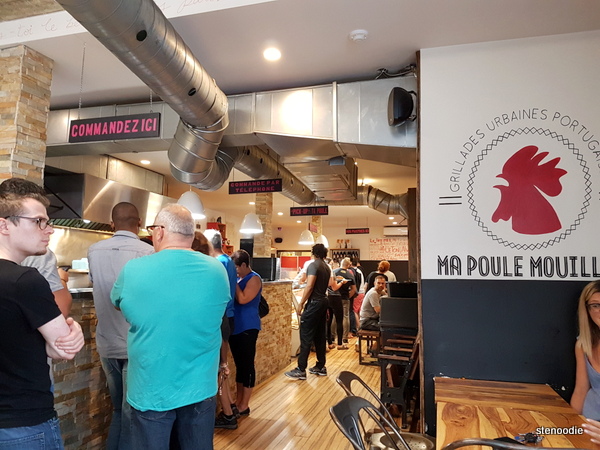 Maybe their staff could have used an extra pair of hands

We ordered the Le Louis Cyr as my friend also said that half a chicken was more than enough for two people.  This set (of the half of their Portuguese chicken) included fries and salad too.  I also wanted to try their Portuguese Tart (Pastel de Nata). 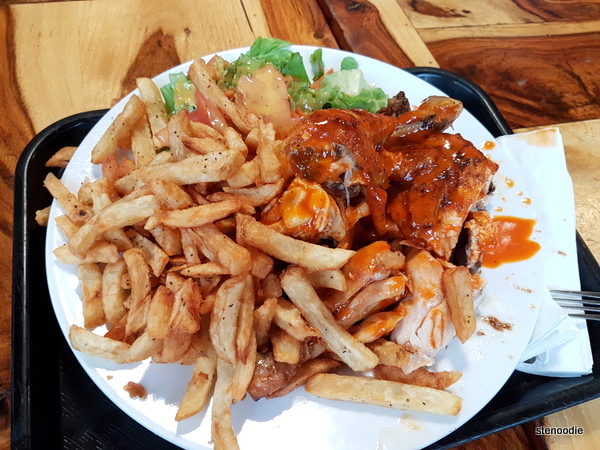 The Le Louis Cyr set sure didn’t disappoint!  The Portuguese chicken was very tender and moist and overall it lived up to my expectations!  We wish there was a little more sauce by the end of the meal as the sauce was absolutely delicious.  Otherwise, it was definitely really good!

We also looked into the menu a little more and figured that we could have ordered the sausages too to try.  Ah well, another time.  We also surveyed what our neighbouring tables were ordering and we were so amazed with the giant poutines that we saw coming out of the kitchen!  They were huge!  We thought that it would probably feed four to six people!  Again, we’d have to try that another time with more friends with us or something.

The Portuguese Tart was not bad! 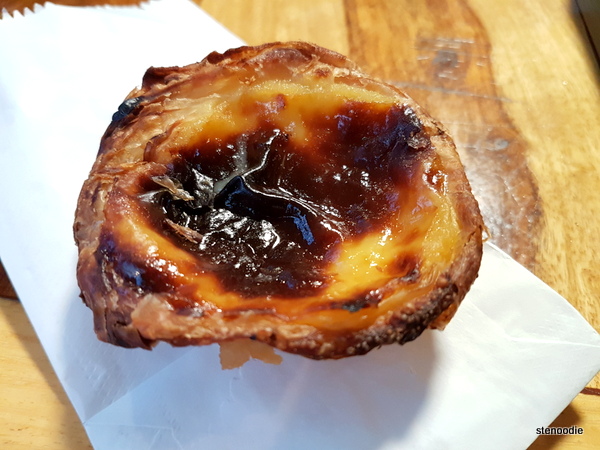 Ken got an espresso. 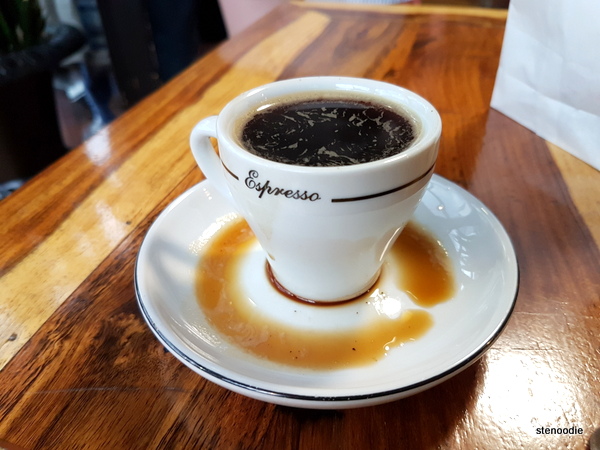 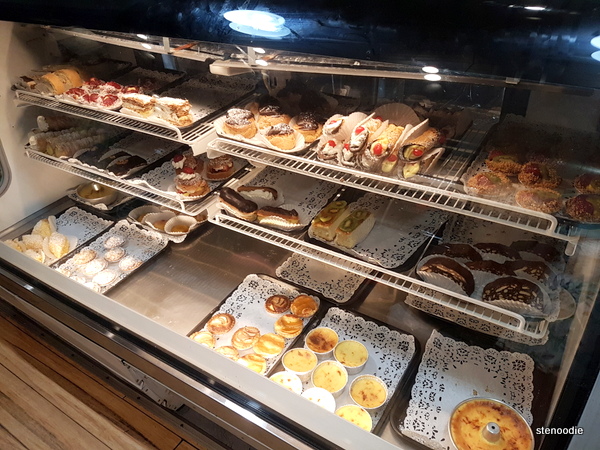 They also have a lot of other desserts too

After our dinner, the line-up outside the door of Ma Poule Mouillée continued! 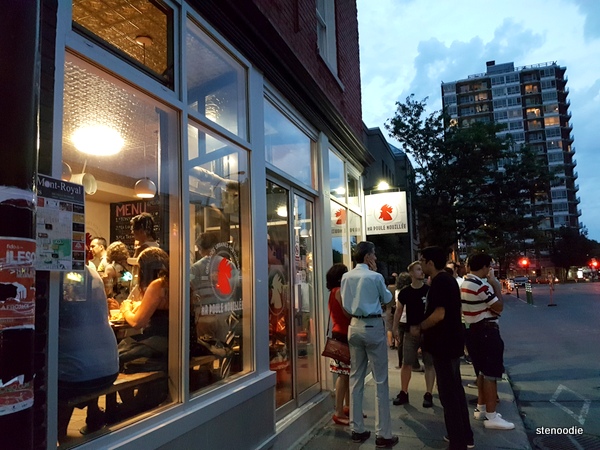 The line-up continued even after we left

We took a stroll around the streets of Montreal. 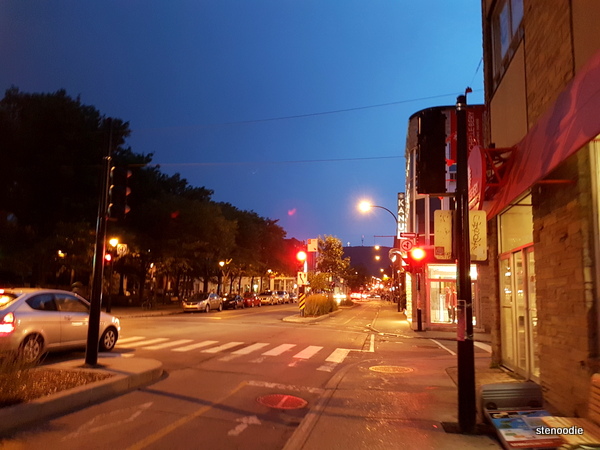 The moon was bright! 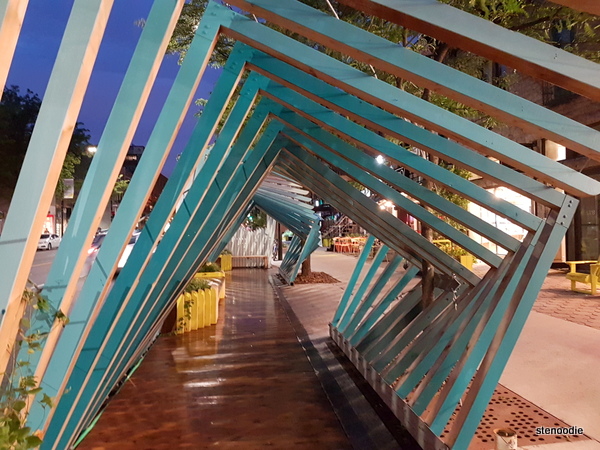 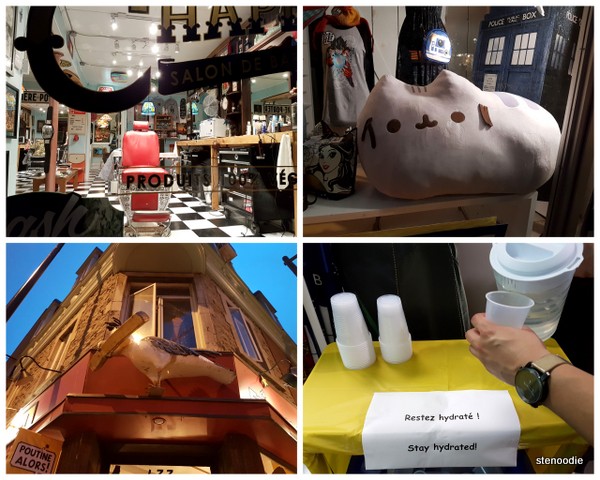 There was a really cool vintage barbershop that we passed by, a comic book and geeky store on a second floor that we visited.  I was very impressed that they provided free water for their guests considering it was summer and very hot outside.

We also passed by a bar with open windows that looked psychedelic with funky pink and purple colours.  We didn’t venture in or look into it much but there was candy all around the bar.  Perhaps it was a candy bar? 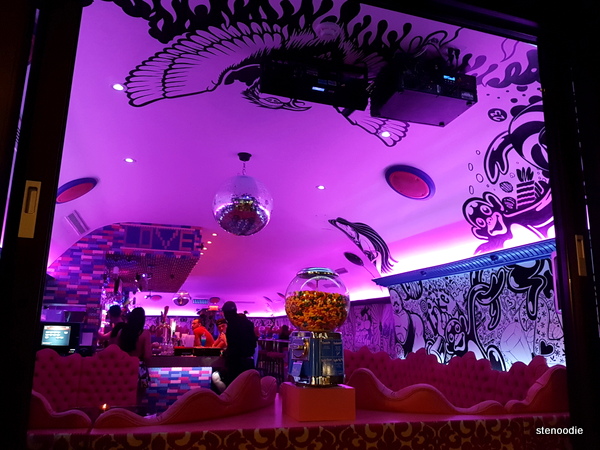 We also popped into La Diperie (1224 Mont-Royal Ave E).  I had never tried the dipped ice cream cones from La Diperie yet and I was extra excited about this location because La Diperie originated in Montreal!  (They now have locations in Toronto too.)  However, it was late at night and I’m not a fan of eating after 9 p.m., nevermind sweets as well.  I really admired how the server made each dipped cone so perfectly.  If I would have tried this place, I think I would have enjoyed it.

There was a sudden downpour so we slipped into a video store and hid out for a bit until the rain let up before we returned back to Mont Royal station to go back to the hotel. 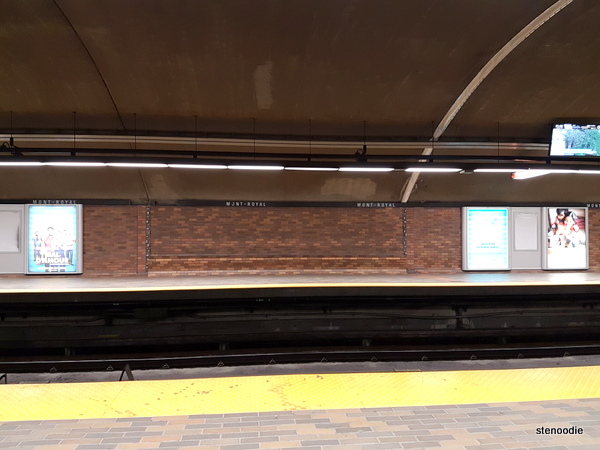 I love how there are built-in seats at the Mont Royal subway station! 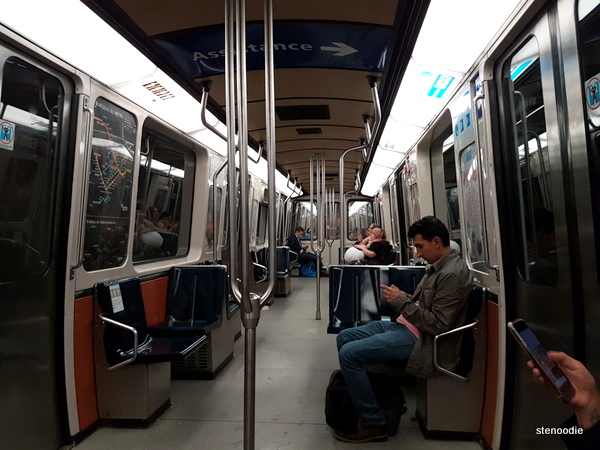 Riding one of the older subway cars back to the hotel

Yay for our first day in Montreal! 😀