Watching The Little Mermaid Musical at the Capitol Theatre in Port Hope! 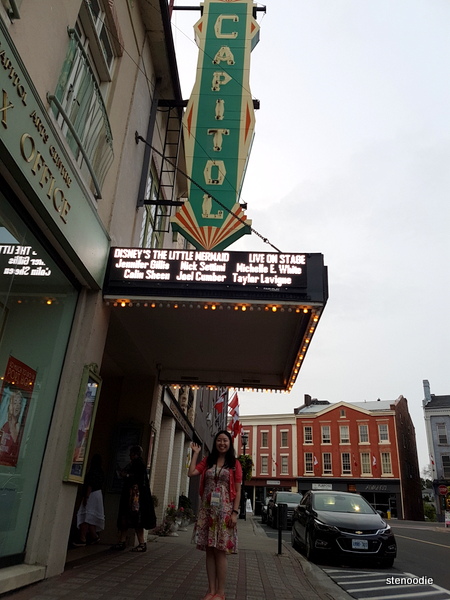 The Capitol Theatre located at 20 Queen St in Port Hope

August 18, 2018:  After a splendid dinner, we headed two minutes down the street in downtown Port Hope to the Cameco Capitol Arts Centre (Capitol Theatre) to watch a musical!

I have loved watching musicals ever since I watched my first one in 2008 (ten years ago in fact!).  Thus, when I found out that Port Hope had its very own theatre and that a Disney classic was going to be on stage, I was extremely excited and looking forward to it.  As a huge musical theatre fan, it was another dream fulfilled to be able to watch a local production here in this perfect little town.  It was the best evening entertainment after a full day of fun! 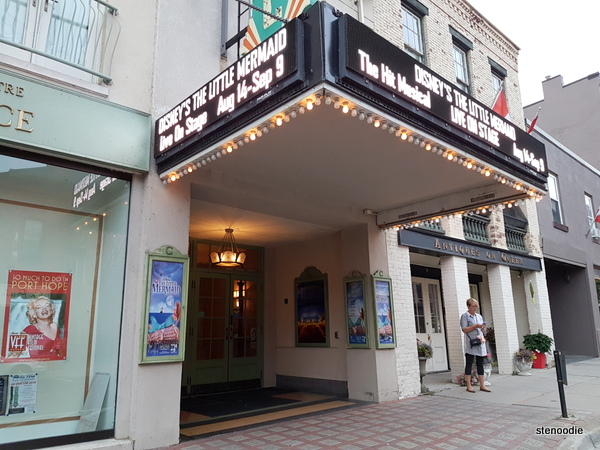 Glimmering lights just like how cinemas used to be 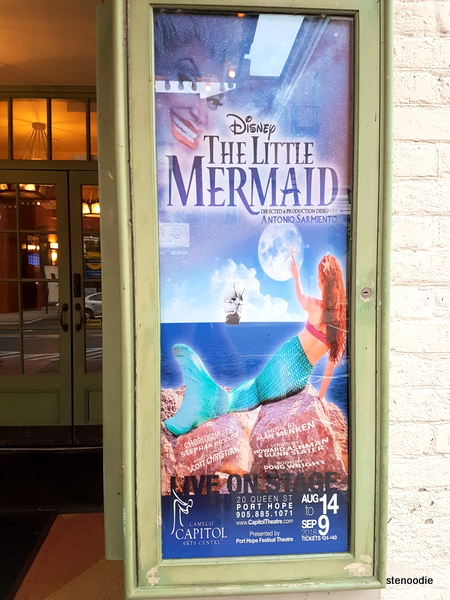 The Little Mermaid playing from August 14 to September 9, 2018 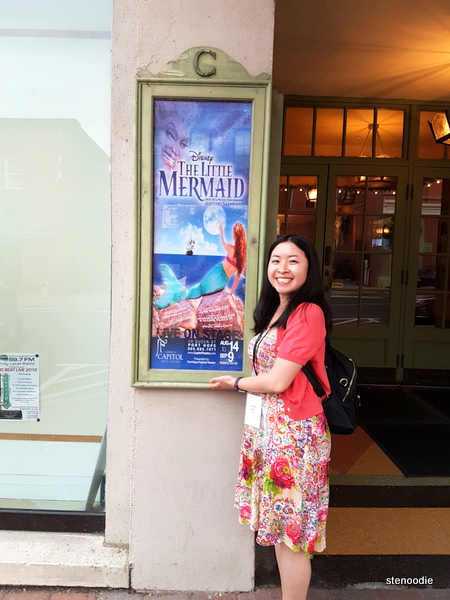 Yay! My first time watching a musical in Port Hope!

The Capitol Theatre is located right next to the Visitors Centre (where you can grab a free guide book to Port Hope and lots of helpful brochures about what to do in the town) at 20 Queen Street in the heart of downtown Port Hope, which is next to so many great restaurants and one-of-a-kind shops.  The Capitol Theatre is a beautiful theatre and actually the last of two only atmospheric theatres remaining in Canada!  They offer both matinees and evening shows.

The Capitol Theatre is a fully equipped Proscenium Theatre which can seat up to 380 guests.  The Capitol Theatre is one of only two of Canada’s remaining ‘atmospheric’ theatres.  The interior of the theatre creates the experience of sitting in an outdoor medieval courtyard, under a blue sky with twinkling stars, and moving clouds.  Fully restored to its original splendour of the 1930s, the theatre operates year-round, providing an exceptional indoor venue with an outdoor feel for theatre, concerts, films, private functions, and much more. 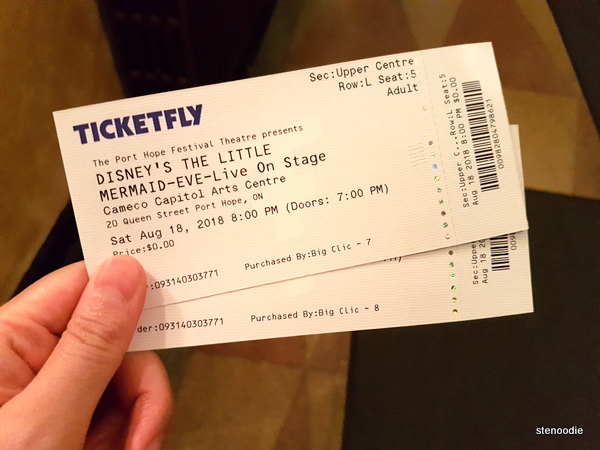 The Capitol Theatre is a registered non-profit organization that raises approximately 55% of its annual operating budget from their box office receipts.  Thus, they still have an annual shortfall in which they count on their supporters to help fulfill.  Those interested can consider making a donation to Capitol Theatre.  Your name can be engraved and placed on a seat inside the theatre or be engraved in the Capitol lobby Hall of Fame too! 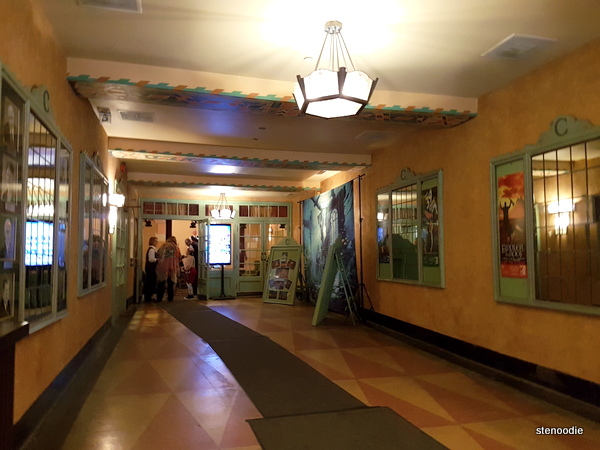 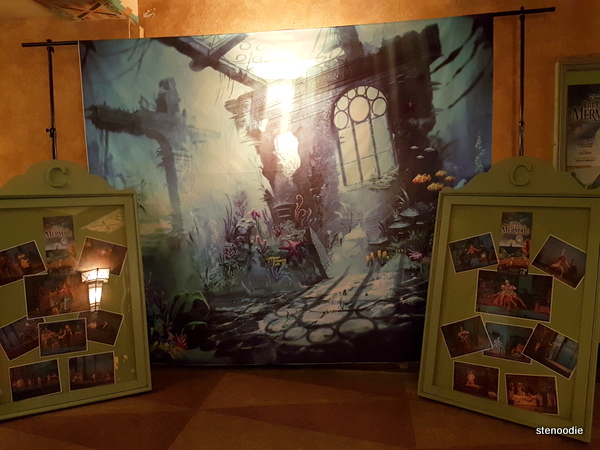 A fun “under the sea” background to take pictures with 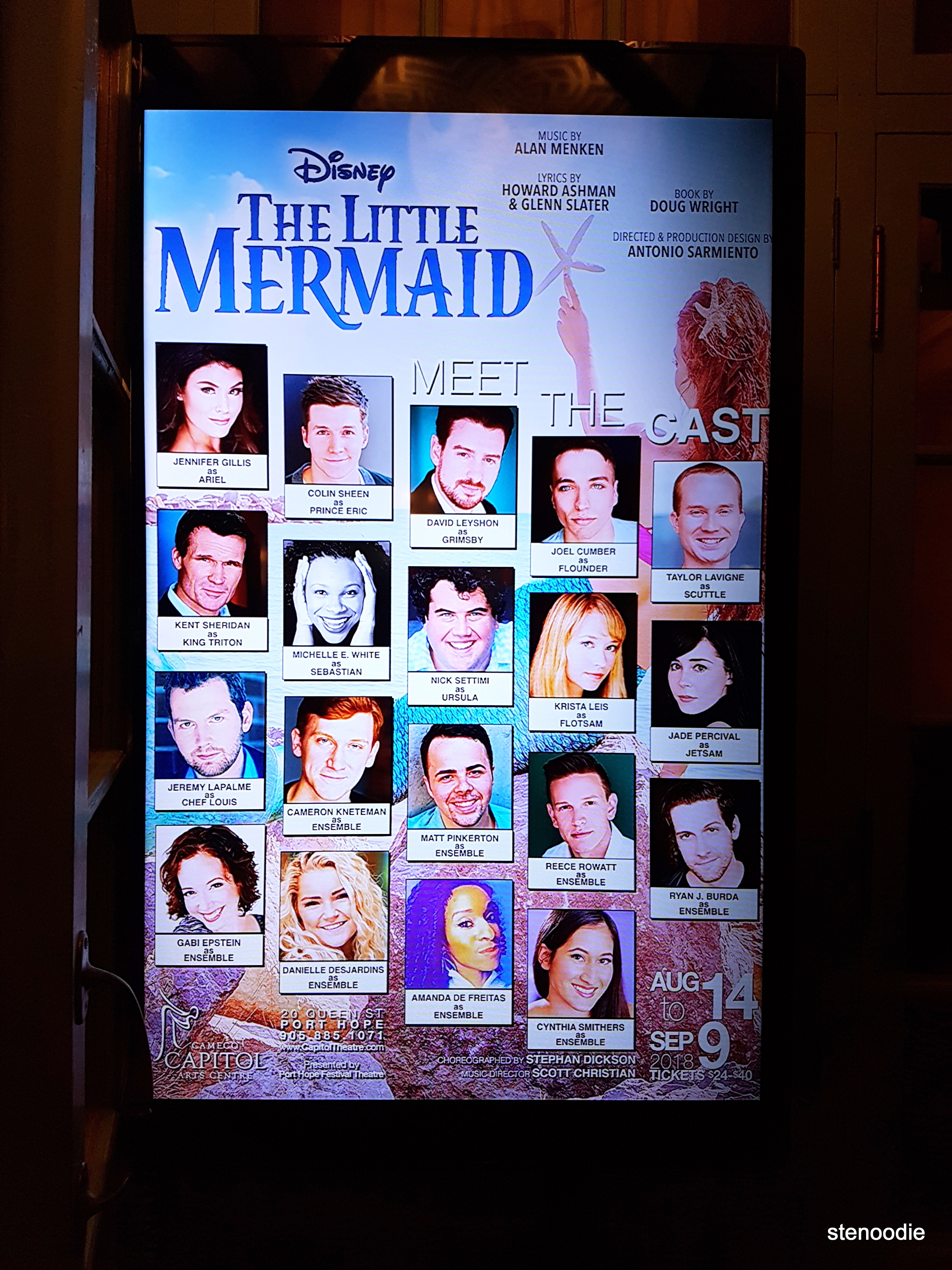 The cast of The Little Mermaid at the Capitol Theatre

Upon arriving for our 8 p.m. show, we arrived just in time to see that there were actually some pre-show performances by actors at the front of the stage.  This seemed so neat and was indeed something not seen often in large theatres.  They also announced the winners of a lottery for a cash prize. 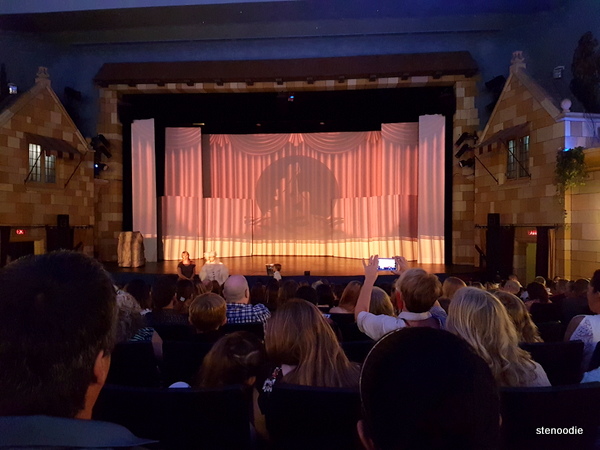 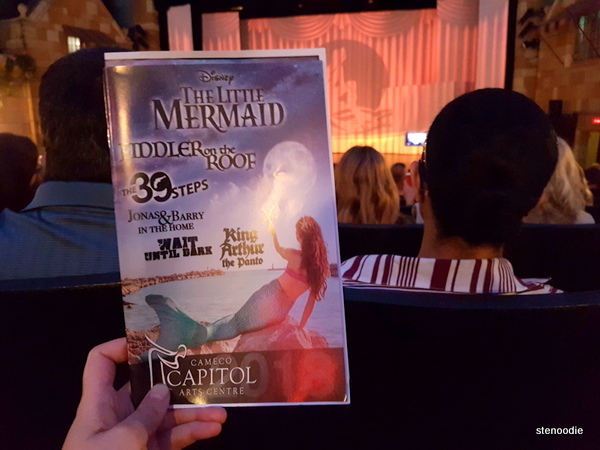 I was so excited to see how they would show this Disney classic on stage!

It was indeed so neat to sit inside an atmospheric theatre and experience what it was like to watch a musical in such an environment.  Throughout the musical, I liked how the colours of the lights shining on the walls and ceilings were synchronized with the set backgrounds so that the scenes were practically expanded beyond just the stage.  It was very unique and something I’ve never seen before. 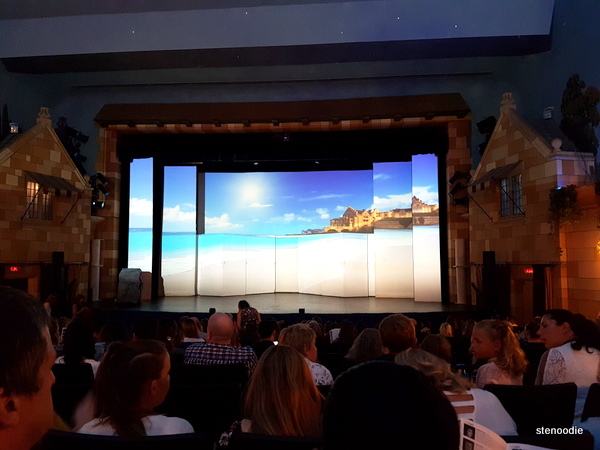 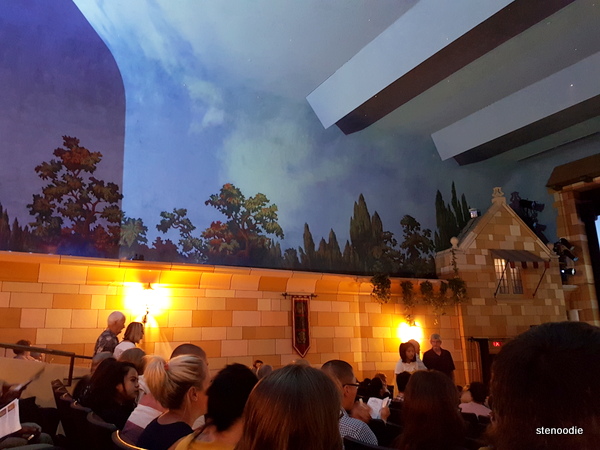 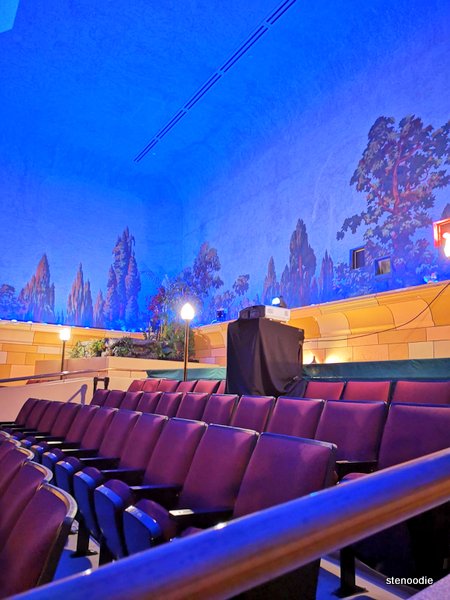 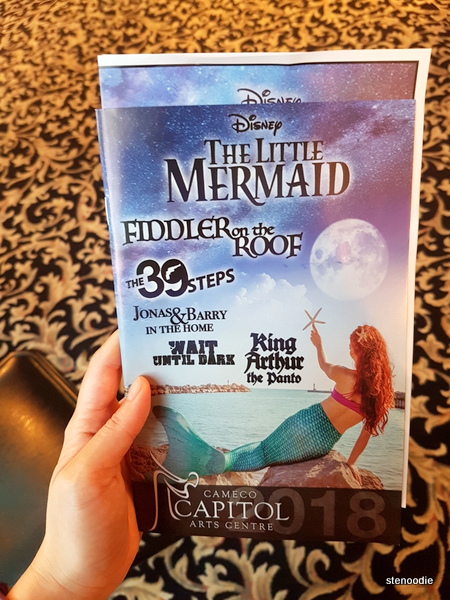 The set design, talent of the cast, costumes of the Little Mermaid production, and staff of the theatre were all commendable.  In particular, the roles of Ariel and Ursula were beyond imaginable in talent.  I think most of us were blown away with the raw talent that was seen in the production!

The Little Mermaid was a wonderful family friendly musical to enjoy. 🙂  I’m so glad that I got to see this production!

Capitol Theatre has an accessible entrance, snack and drinks concession stand, and plenty of restrooms in an air conditioned space.  The staff were so friendly too! 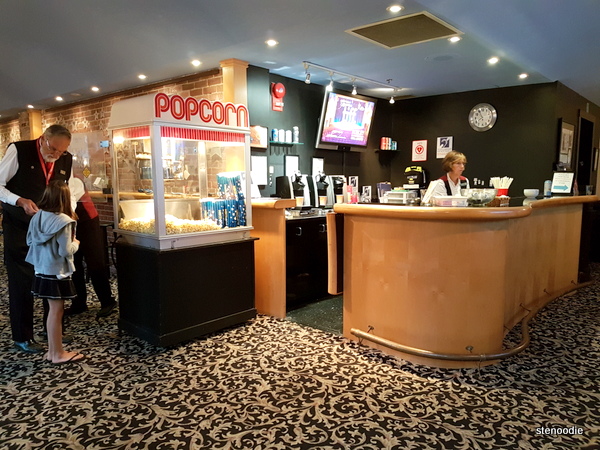 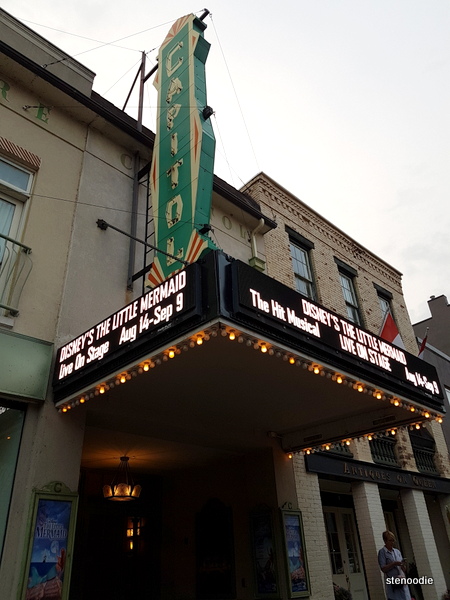 Love the ‘old look’ of the theatre

4 Responses to Watching The Little Mermaid Musical at the Capitol Theatre in Port Hope!