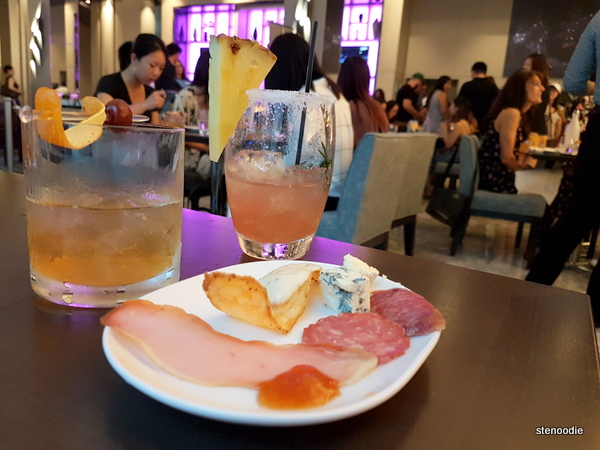 August 27, 2018:  This Yelp Elite Event was held at the Draco Markham restaurant inside of the Toronto Marriott Markham hotel at Enterprise Boulevard and Birchmount Road in Markham.

This was a classy yet smart casual affair where there were featured cocktails and dishes available for us to sample.  It was not meant to be a full meal and more of a cocktail party to mingle and taste some of Draco’s specialties. 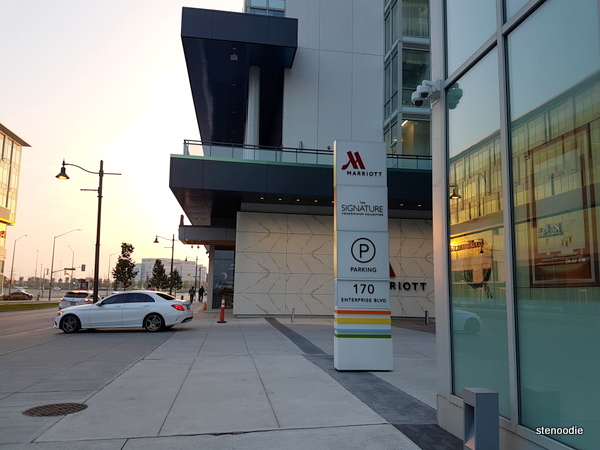 It’s located right across from the Markham Cineplex 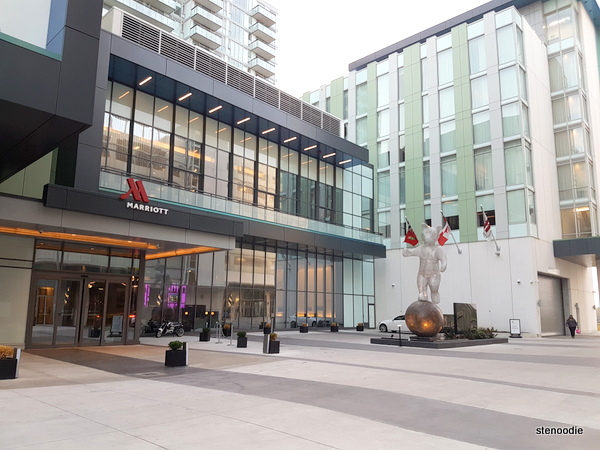 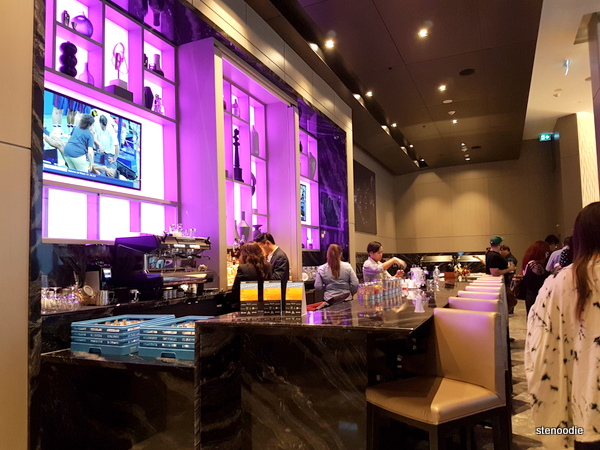 The event began at 7:30 p.m.  There was ample public parking onsite near the more east side of the hotel.  The hotel lobby and adjoining lounge area were gorgeous! 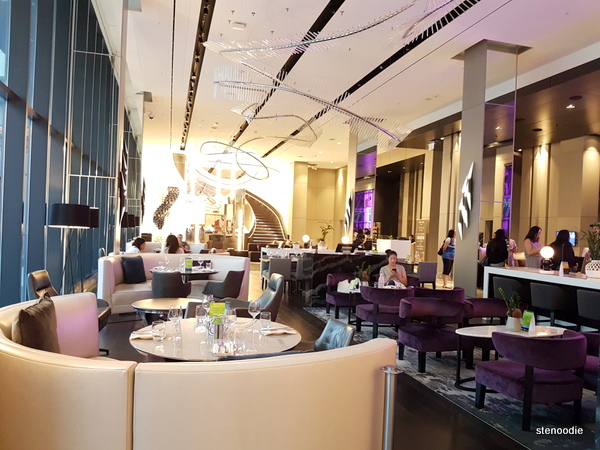 After lining up and signing in with the Yelp hosts, we found ourselves a seat in the dining area and then were able to queue up to try the Seed to Sausage Farm Charcuterie, Cheese Sampler, and Buffalo Chips. 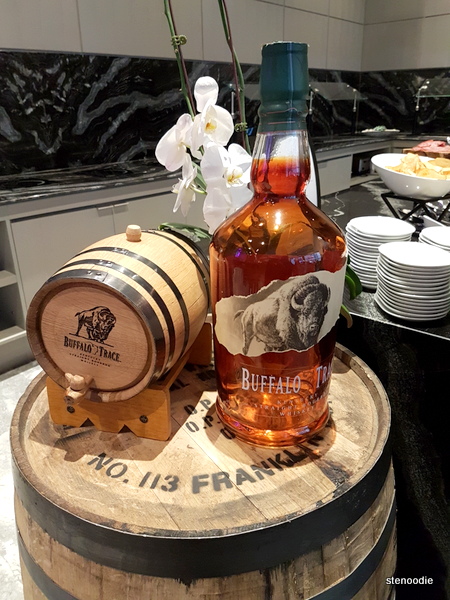 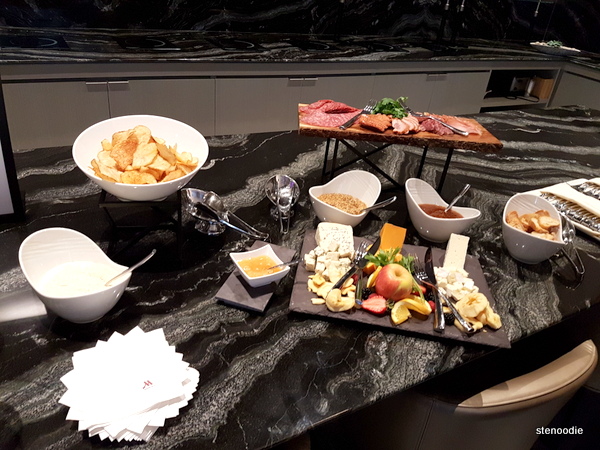 The spread – charcuterie and cheese platters 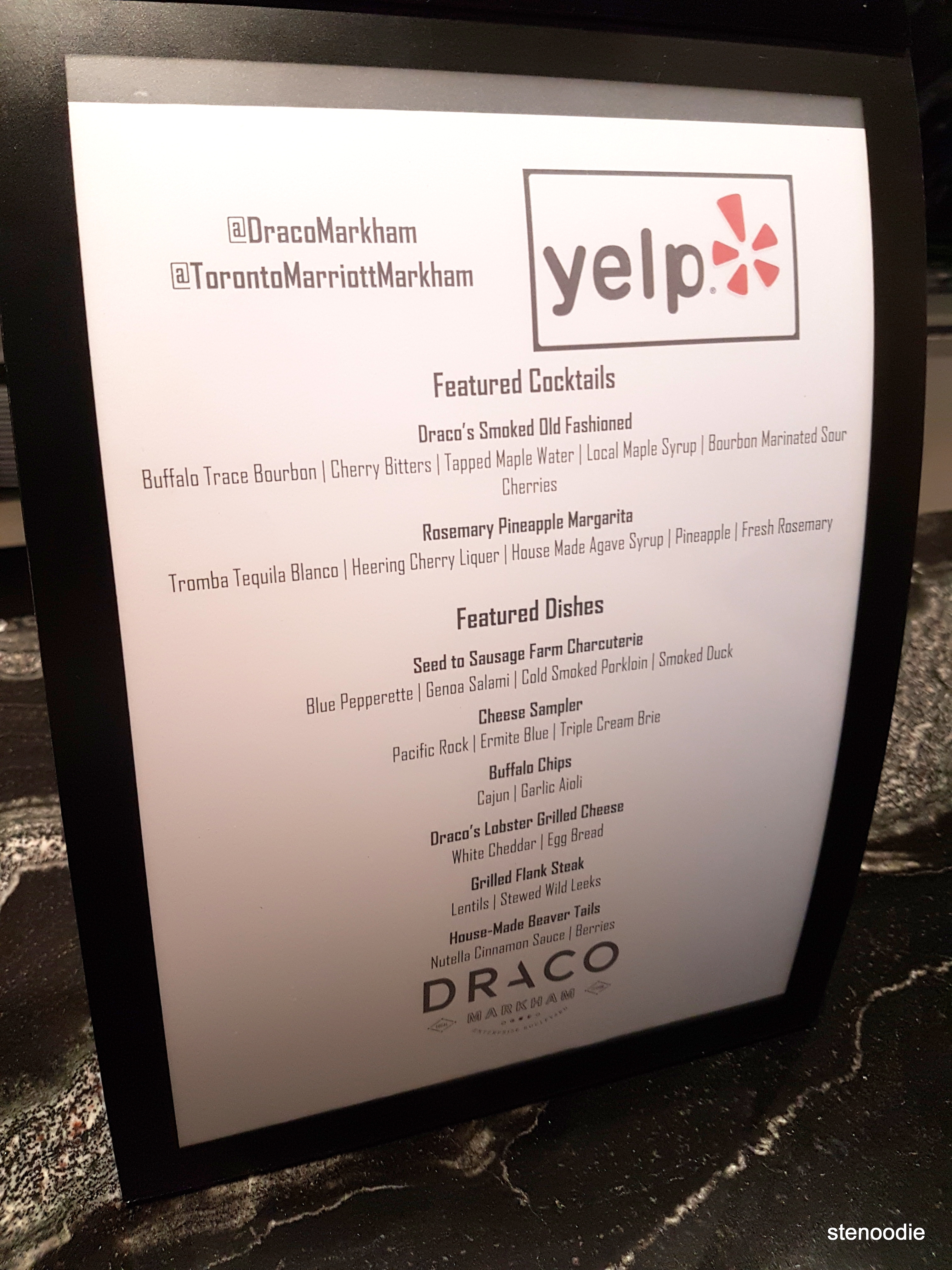 Menu for the evening

Meanwhile, servers came out with the cocktails and featured dishes.  They were very professional and polite and made sure that we were served fairly even while in line. 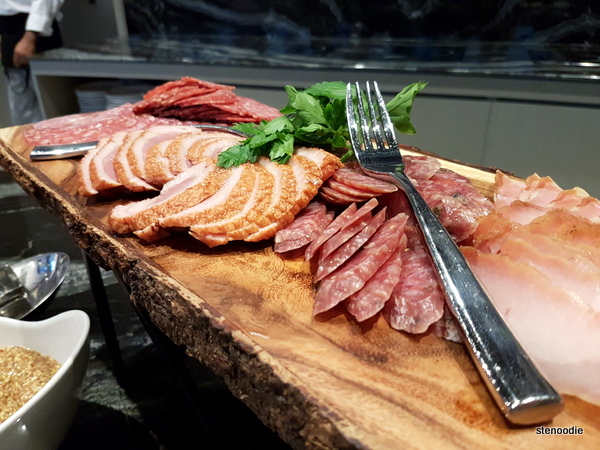 The items that I tried were very good and of high quality.  The only item that most of us didn’t get to try was the smoked duck meat (since there wasn’t much of it so only those at the beginning of the line were able to try it). 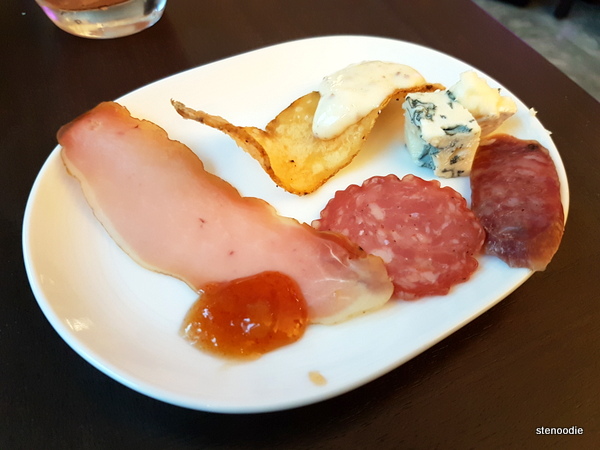 Some of the items I tried 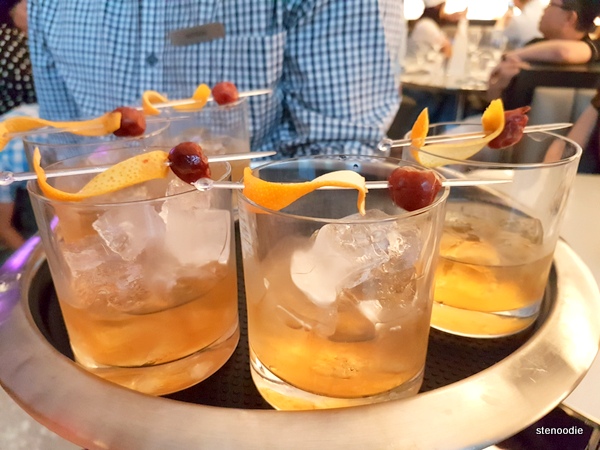 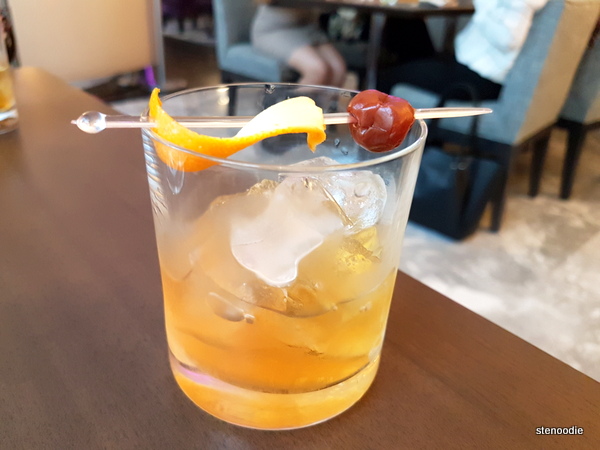 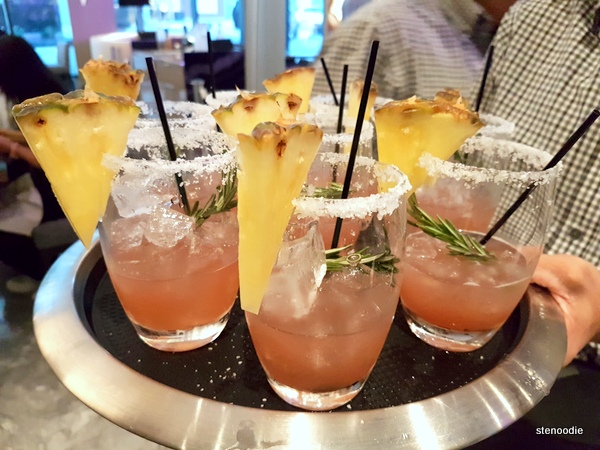 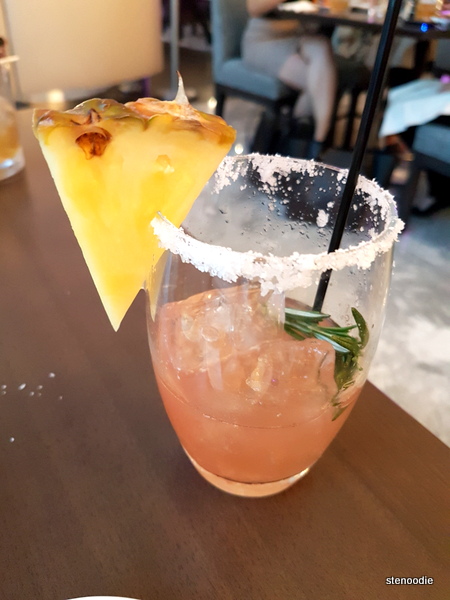 The Draco’s Lobster Grilled Cheese was absolutely delicious!  I had two in total that night and wish I could have had more. :9  The bread was perfectly crispy and the ratio of lobster to cheese was so good. 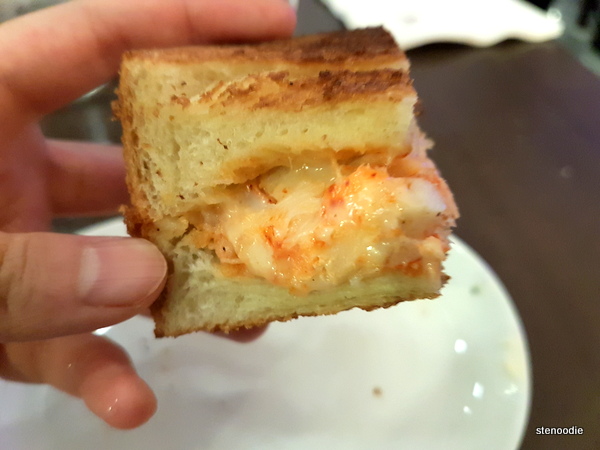 The Grilled Flank Steak was nicely done and although I don’t usually enjoy lentils, the seasoning and stewed wild leeks all came together nicely.  I also got to try two servings of this. 🙂 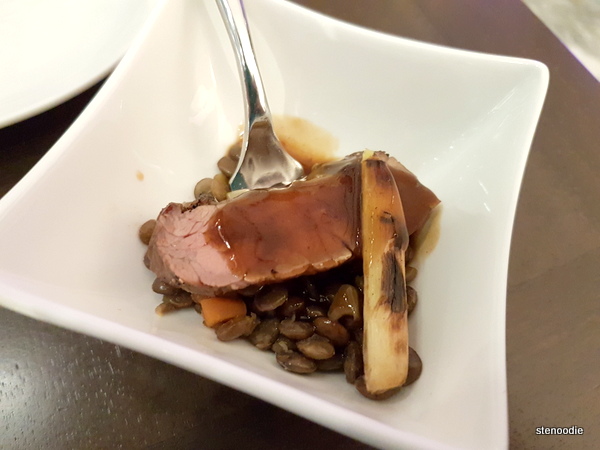 The House-made Beaver Tails was unique too.  I had never tried beaver tails in a bite-sized ball form before. 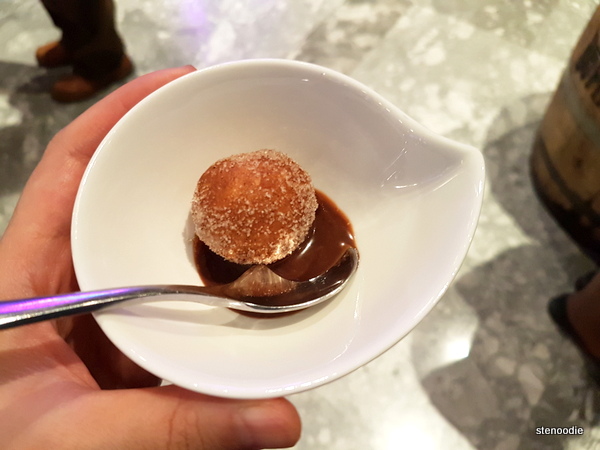 Thank you, Yelp, for inviting us for a great night out at Draco Markham to try their featured cocktails and dishes! 🙂  You can check out their full menu at this link. 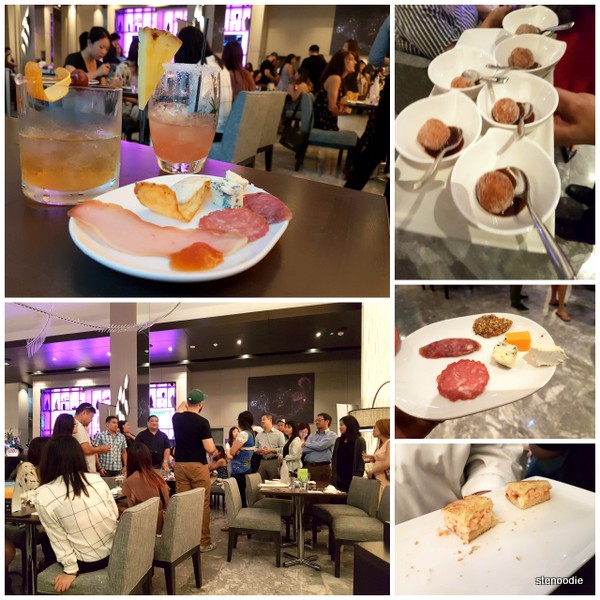 FTC Disclaimer:  Although Yelp and Draco Markham invited me to a complimentary event, the opinions expressed here represent my own and not those of the businesses.