Next to Normal musical in Toronto, May 2019 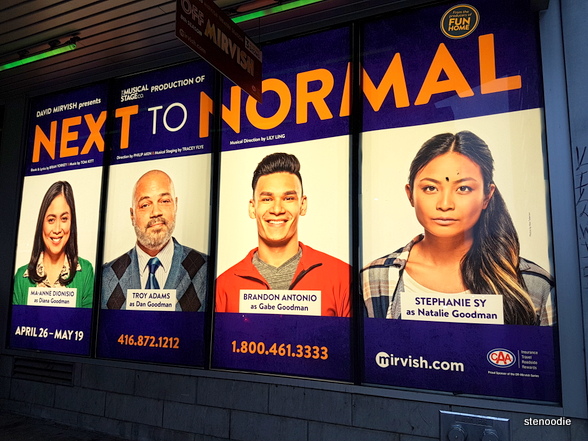 Next to Normal at the CAA Theatre in Toronto

My first time “reviewing” a musical.  I’ve seen so, so many musicals over the years but really didn’t think to “judge” them like I have for my numerous restaurant reviews (but I did assemble a photo slideshow of all my visits).  I like documenting my life and experiences too much, so here is a look at what I thought of watching Next to Normal this time in Toronto at the CAA Theatre (formerly the Panasonic Theatre).  It was put together as part of The Musical Stage Co., an off-Mirvish production.

I’ve seen this musical once before in July 2011 for the first time when it was on stage at the Four Seasons Centre for the Performing Arts as part of the Dancap Productions (oh, how I miss Dancap).  I remember how amazing the musical was and I left the 2.5 hour show feeling so inspired and mesmerized by the music.  There was a huge three-level stage set where the cast sang from, and the emotions in the songs were so raw and real.  You could really hear all of the hurt and pain from the voices. 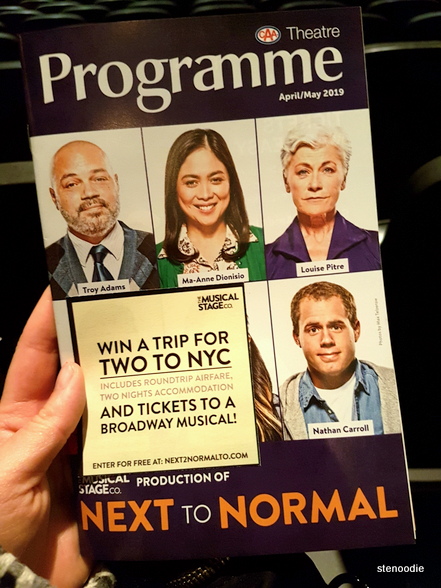 I should have removed that contest sticker before taking this photo >.<

For this show, I wasn’t impressed with the quality although the same lingering feeling of inspiration and goosebumps returned.  There’s just something about the songs in the musical that stayed with me.  It’s not supposed to be a dark musical although it definitely strays away from the light-hearted and happy subjects that Broadway musicals usually feature.

The friend that I went to see this second production with said how incredibly “sad” the musical was, but I really think mental illness is such a real and important part of society that we must acknowledge.  There are so many people suffering silently with mental issues.  It’s not sad or foreign at all.  It’s reality.  In fact, more people would gain new perspectives about the unexplored topics of mental illness by watching this musical.

I love how real the musical is and how the emotions are so raw.  The melodies are purely addicting and the songs stay in my head hours after I’ve heard them.  Everything is just hauntingly beautiful and chilling.  Those are definitely the words I’d use to describe this musical. 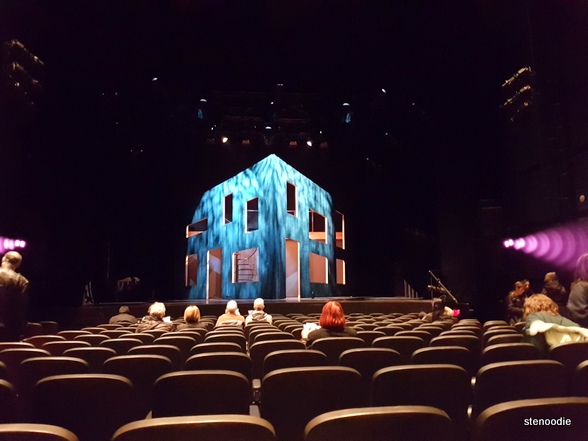 Row P. Pretty good seats but wish the theatre rows had more of an incline

Something fell flat in this production though.  The cast wasn’t very good, I’m sorry to say.  The character of Diana absolutely *needs* a very strong and very emotive singer to play it.  There are so many solos for her in this musical when she’s expressing her heartbreak and pain that a simple memorization of the lyrics and outputting will not do.  It needs to be be an outpouring from the heart every time — especially so when you don’t have any backup singers or huge chorus numbers, like in other musicals, or even dance numbers.  It’s all pure singing in this musical.  Even every piece dialogue is told through song.  If the singer isn’t good, then the production turns shit.

The role of Henry was terrible.  The “Hey” numbers were another part of the musical I loved since Henry’s voice was so endearing, comforting, and tender to Natalie.  In this production, the actor who played Henry (did I hear incorrectly) had a bit of a teenage crack at times.  It was so bad.  The “Hey” numbers are supposed to be super tender, but the male part fell so flat.  It was so disappointing.

Natalie’s voice was beautiful in this production, but it’s kind of disappointing that she was the only solid quality singer.  I also loved her attitude and cynicism from the 2011 production I saw.  It was a bit missed here as well.

Also, I felt like a lot of key moments were missed in this production.  The few humorous parts fell flat either because of missed tonality or just poor comedic timing.  It was slightly disappointing.

I noticed as well that sometimes the live orchestra music overshadowed the live voices a little bit.  This shouldn’t happen at all.

As much as I love this musical and would definitely watch it again right away before it closes, I would want to watch another cast.  When it comes back to Toronto, I’m watching it a third time.  By then, the cast will be different and I’m curious to see how the production will turn out.

This CAA Theatre also had a much smaller stage when compared to the Four Seasons when I watched Next to Normal initially.  This also affected the quality of the musical.  Also, as other critics have mentioned, you could see the stagehands near the side of the stage handing items to the cast.  We should never see the stagehands!

Edit:  I just found out from reading this article that the July 2011 production that I saw had actually the original Alice Ripley in it as Diana!  No wonder it was so amazing!!  I was so spoiled and so lucky to have been able to see her live as Diana.  I’d love, love, love to relive that experience again now.  Would she ever tour again?  Doubt it.  Until then, I’ll have all her recordings on YouTube to rewatch and replay over and over again for now. 🙂

Maybe the reason why I like this musical so much and why I get so many goosebumps is because there’s a sad part of my past too.  I mean for someone who lost her father at the age of 15, there is a sense of morbid reality and loss and unexpected heartbreak for someone experiencing it so young.  It never heals.

2 Responses to Next to Normal musical in Toronto, May 2019