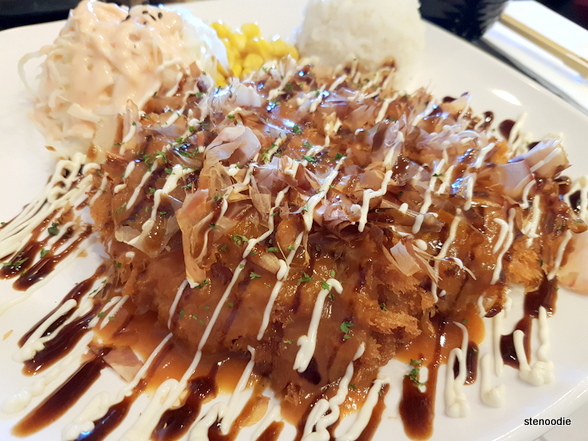 April 28, 2019:  We were in the area of First Markham Place and looking for a restaurant to have lunch.  We went to Brown Donkatsu and Ramen.  I remember when this restaurant used to be called Sonoya Japanese Noodle House (the ramen was mediocre).  It seems that they still serve all of the ramen choices that they used to offer as Sonoya but now include Japanese tonkatsu (fried chicken or pork cutlets) and donburi (rice bowls) as well.  They’re so smart to do so since their popularity has been given a boost because of it, (the restaurant was constantly seeing waves and waves of customers during our time here). 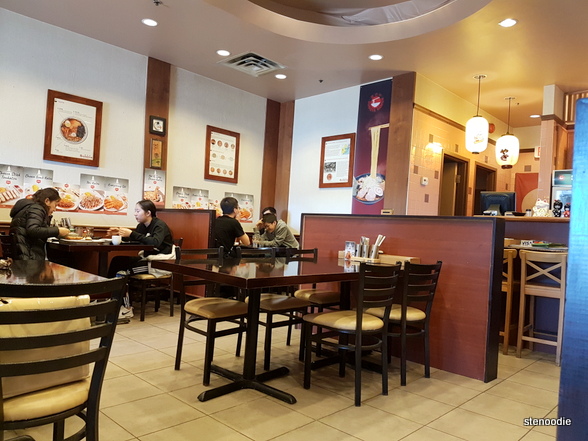 (Upon reading their website, it turns out that Brown Donkatsu is a pork cutlet franchise from Korean operating since 1986!  No wonder their food was so good.  Again, smart thinking on Sonoya Ramen to partner up with this mega chain to stay afloat.) 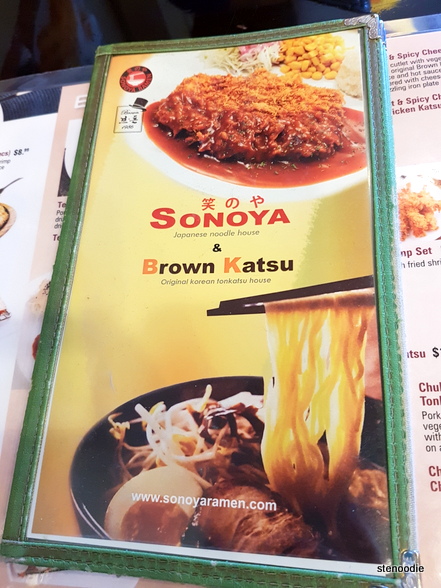 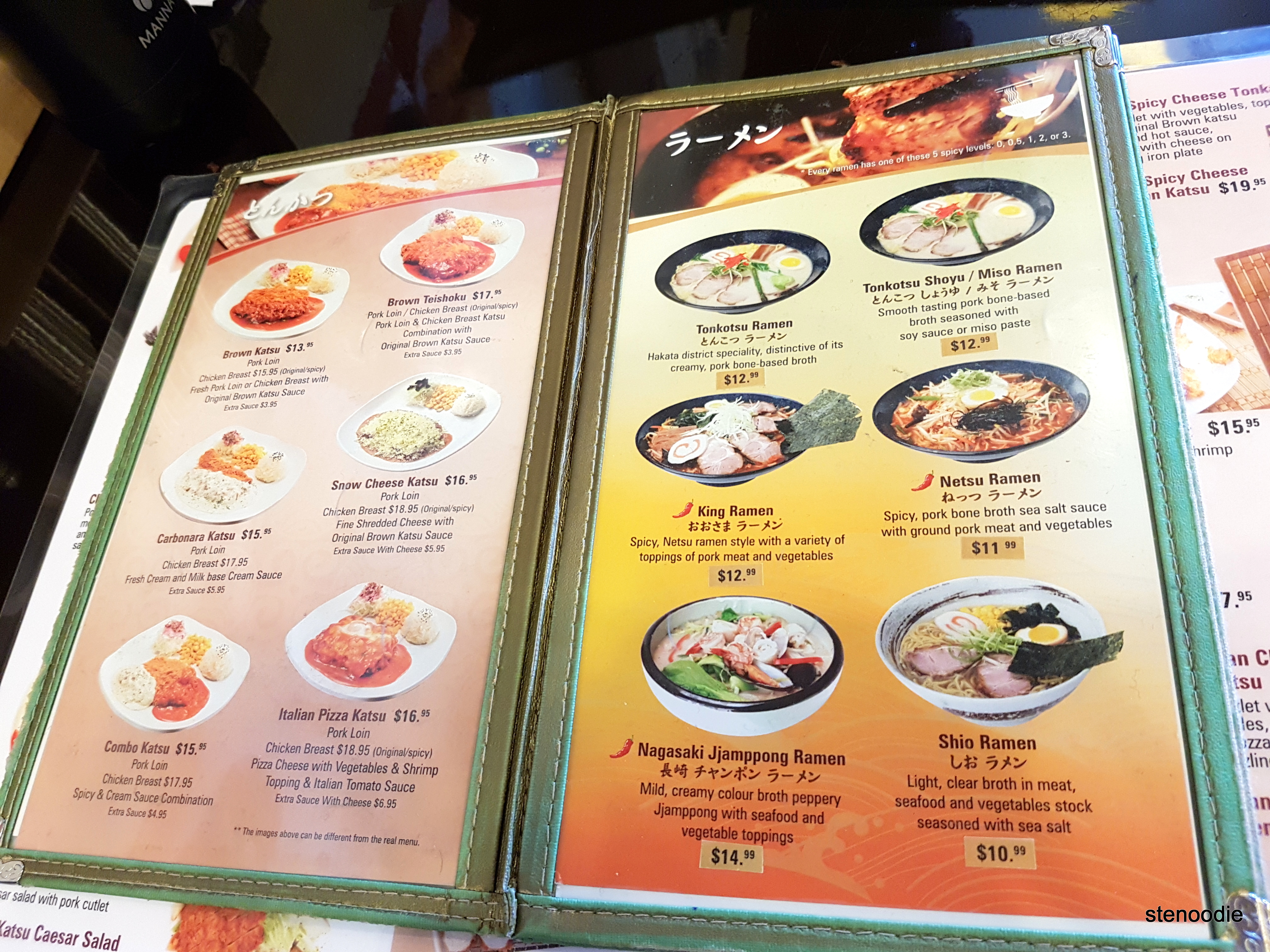 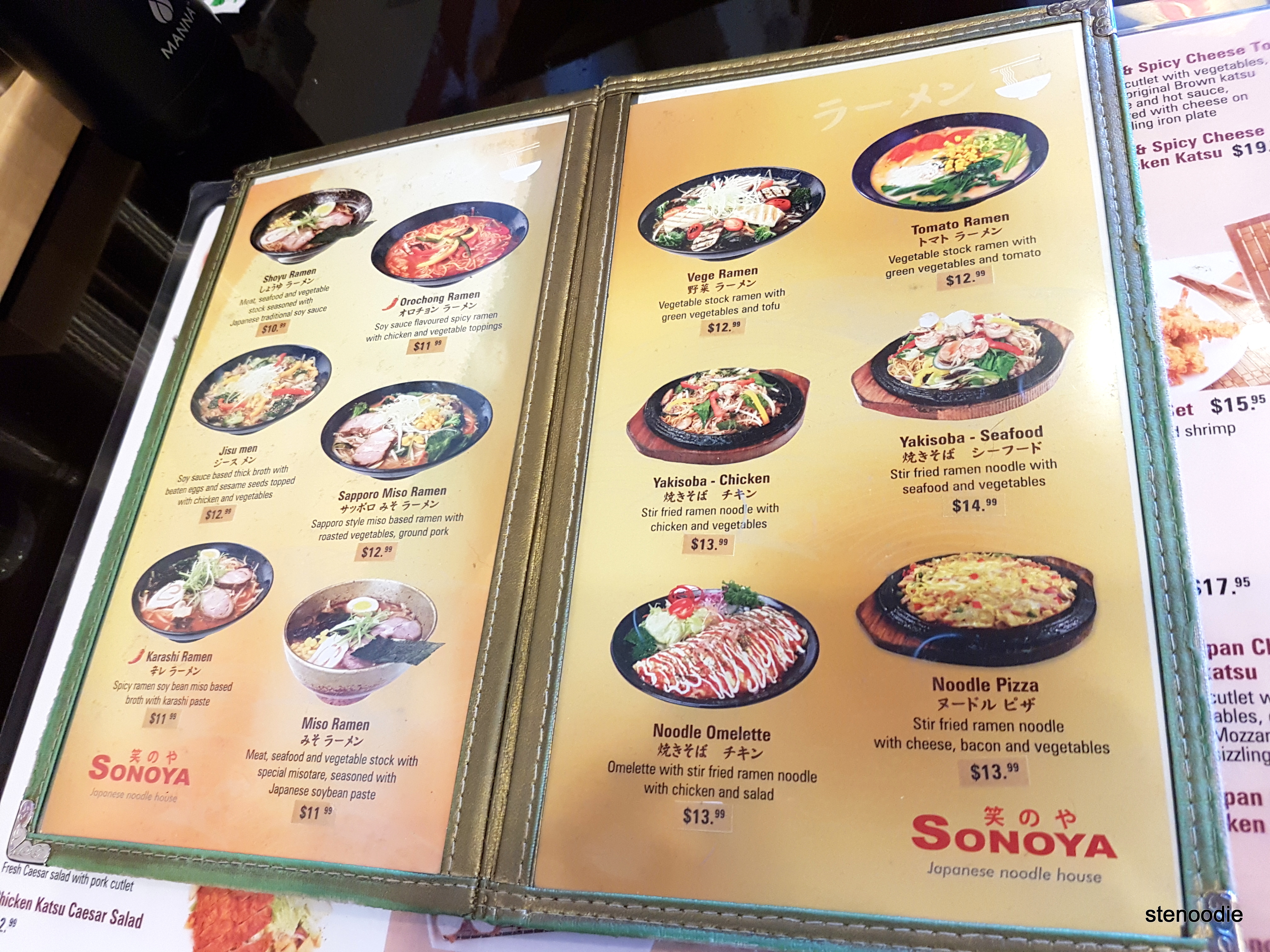 Ramen on the menu 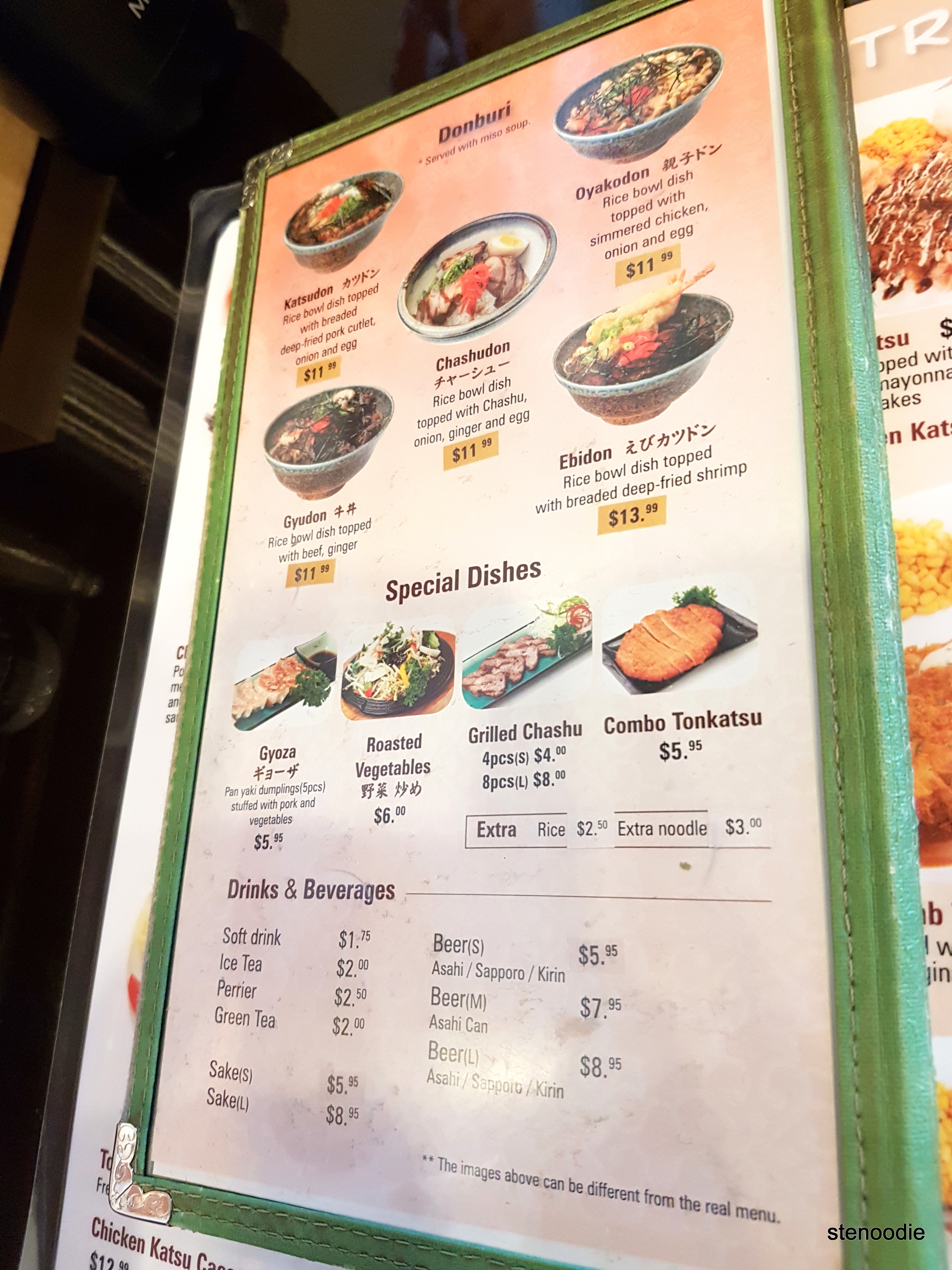 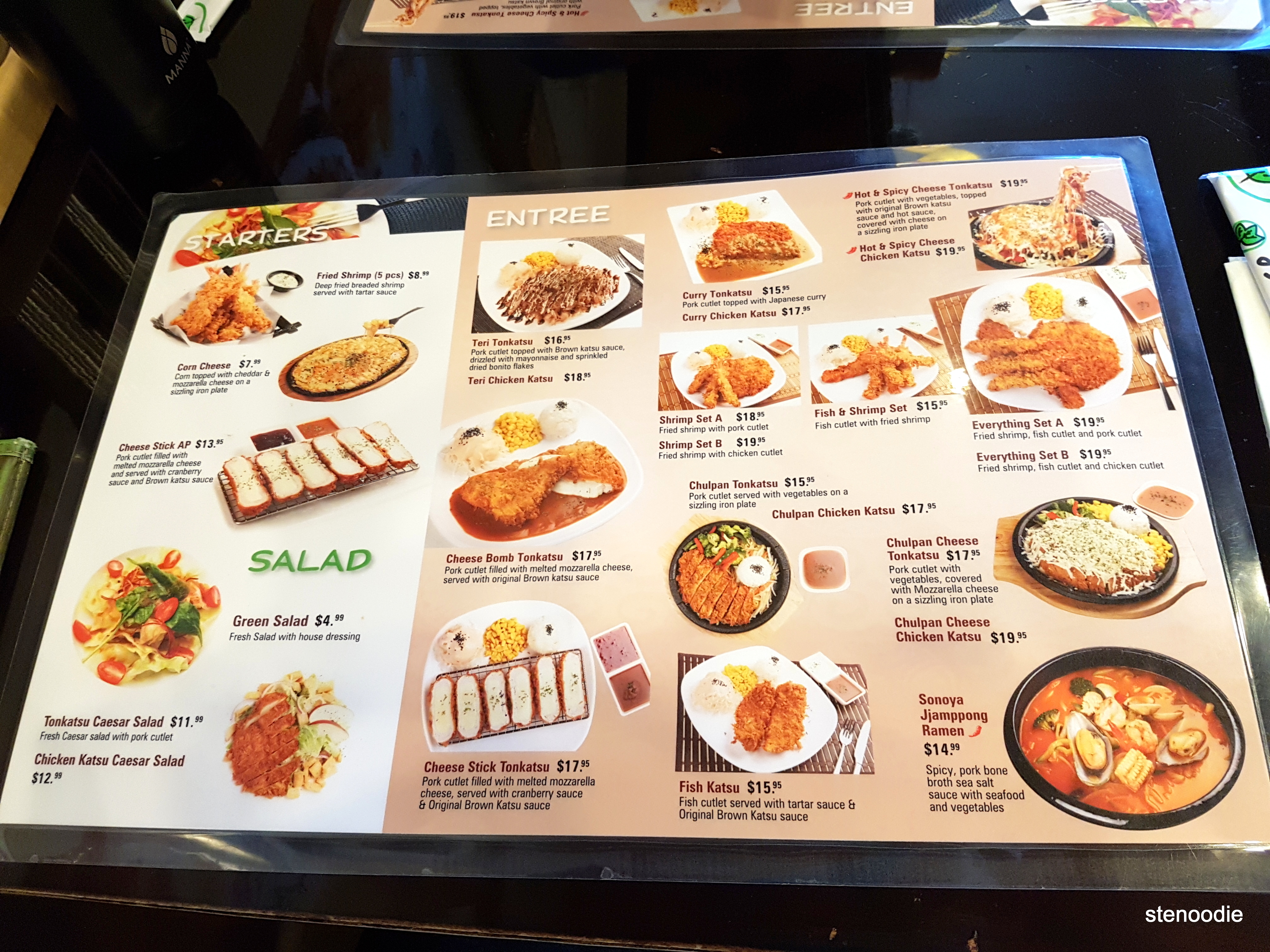 The female owner was so attentive and warm to all of the the guests!  It was such a pleasure to see.  When I had asked for hot water instead of the standard tea, she informed me that the rice tea didn’t have any caffeine in it (she read my mind).  After we were served our dishes, she also asked us if we wanted any pickles (pickled radish) that were on the house.  We definitely accepted her offer. 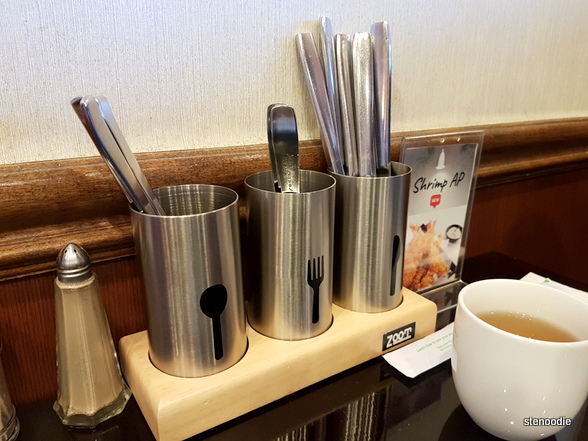 Utensils available on the table 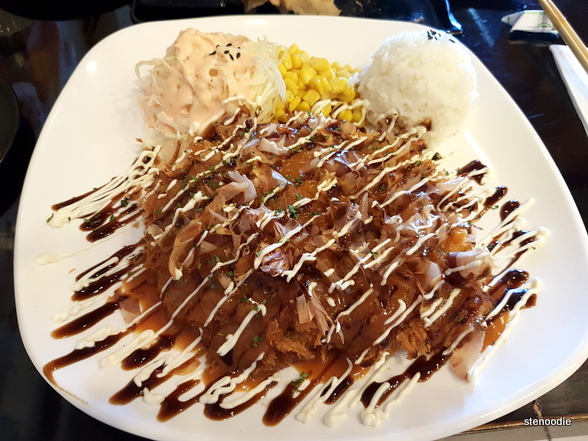 Most importantly, the food was absolutely delicious!  I ordered the Teri Tonkatsu (pork cutlet topped with Brown katsu sauce, drizzled with mayonnaise and sprinkled dried bonito flakes).  This was a huge portion.  It came with a small serving of rice, corn, and coleslaw.

The pork cutlet was perfectly fried with a very crispy batter.  It didn’t taste heavy or greasy at all.  The pork underneath the crispy batter was also so tender and not tough at all.  The sprinkled dried bonito flakes were a nice topping to the dish.  I devoured this dish quickly since it was so good. 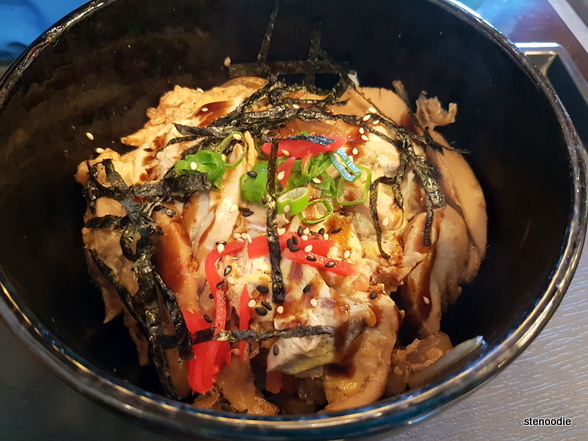 Ken got the Oyakodon (donburi) rice bowl dish topped with simmered chicken, onion, and egg.  His portion was disappointingly small.  While my pork cutlet dish looked exactly like the photo in the menu, his looked like a shrunken version of the photo.  The taste of the rice with the chicken and egg was delicious though.  It was slightly sweet too because of the sauce that was added to it.

Both of our selections included a bowl of miso soup. 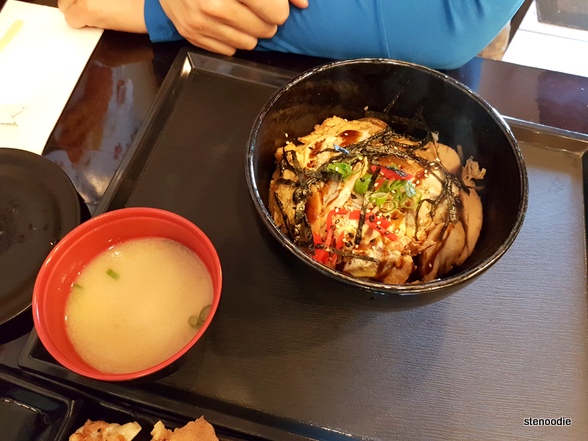 The Gyoza side dish that we ordered was pretty good.  It arrived with all of the pan fried dumplings turned over, which was an interesting way to serve them.  The dumplings had pork and vegetables in them. 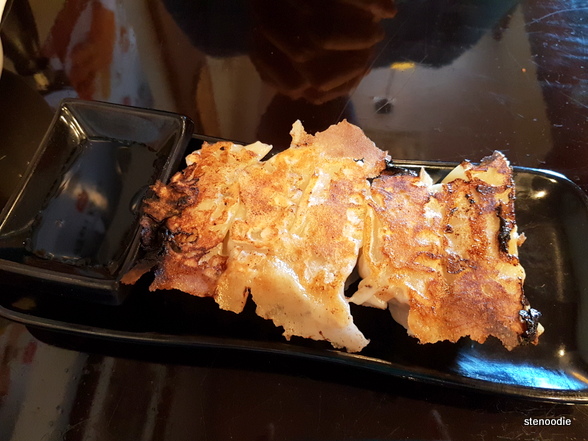 I would definitely return to this tonkatsu restaurant!  Their food was top quality and very delicious.  They have so many types of chicken cutlets and pork cutlets on their menu too.  Some of the selections contain gooey cheese as well.  I think it might even be one of the best hidden gem places for tonkatsu in the Markham area.  Do you know of other restaurants serving good tonkatsu in Markham?  Leave your recommendations in the comments below! 🙂 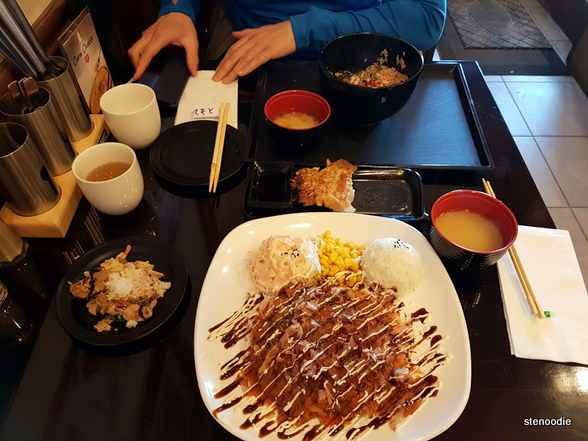 Our lunch at Brown Donkatsu 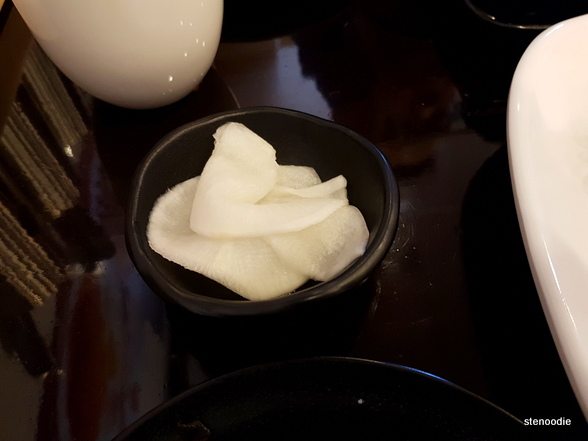 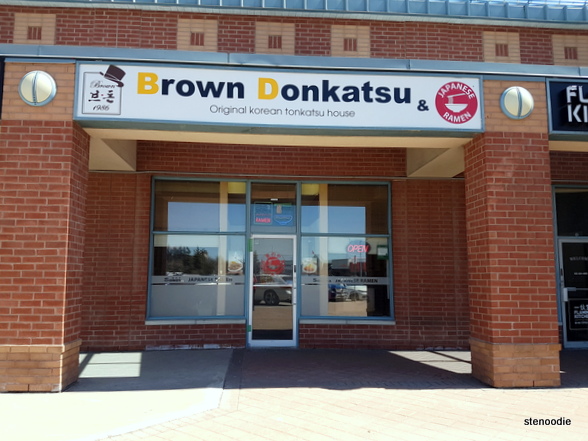