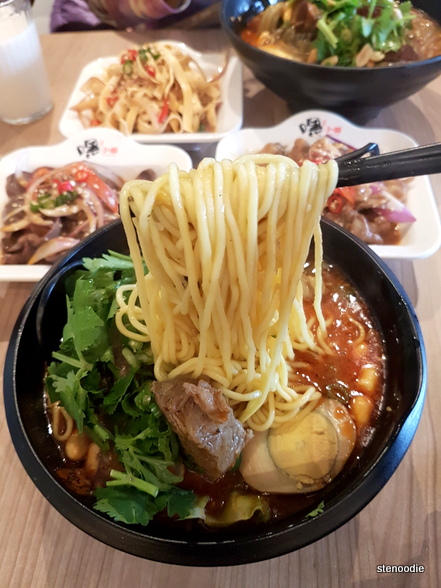 The newest location of Hey Noodles is in Mississauga at 900 Rathburn Road West.  This is their sixth location in the Greater Toronto Area.  They are open to the public starting today, May 12, 2019!

Hey Noodles is a brand from Chongqing, China with 200 locations worldwide with more and more shops expanding in the GTA.  Their signature noodle style “xiao mian” literally translates to “small noodles” and is a staple food from Chongqing that can be found anywhere in the city and is regularly eaten throughout the day including for breakfast.

Hey Noodles also unveils their new brand which reflects the growth and commitment to the Canadian community.

To celebrate the newest location opening in Mississauga, they are once again offering the #dollarheynoodles promotion.  All of the locations in Toronto will offer the classic Xiaomian Chongqing Street Noodles for $1 only when you dine in.  This also includes unlimited noodle refills. 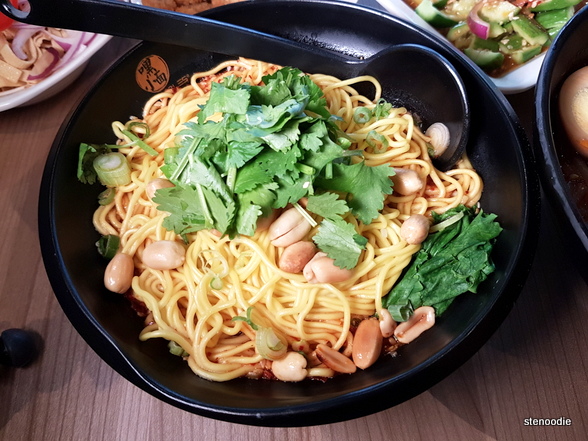 To redeem the offer, all you have to do is follow their Instagram handle, @heynoodlesofficial, and tag three friends in the comment of the promotion post.  Show it to the server, and you will be able to enjoy the $1 promotion. 🙂 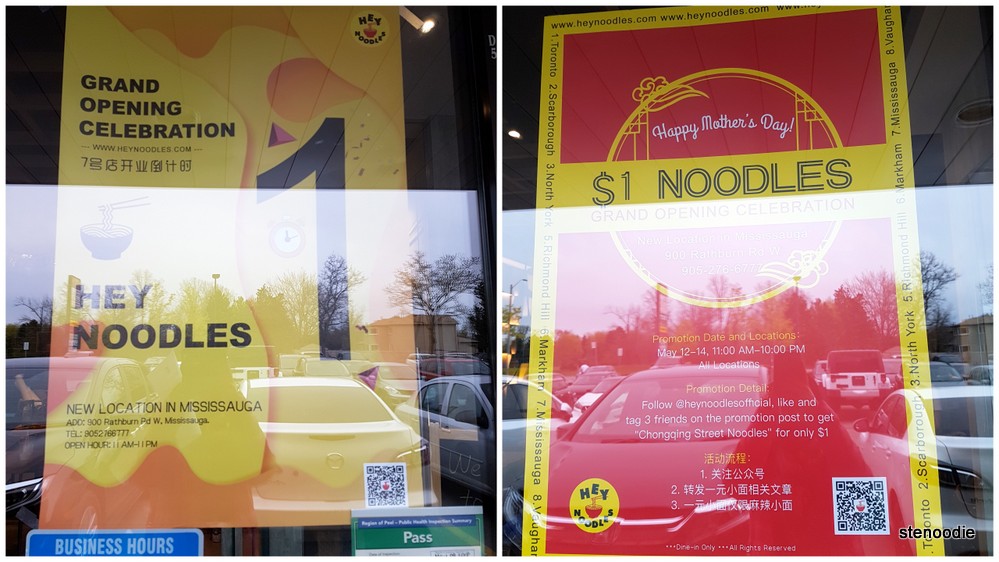 Hey Noodles $1 noodle promotion to celebrate the opening of the Mississauga location opening!

Here are all of the locations of Hey Noodles in the Greater Toronto Area so far:

On May 11, I was invited to the preview tasting at the new location in Mississauga to try out their food items (event organized by Devon) to promote the $1 Noodles. 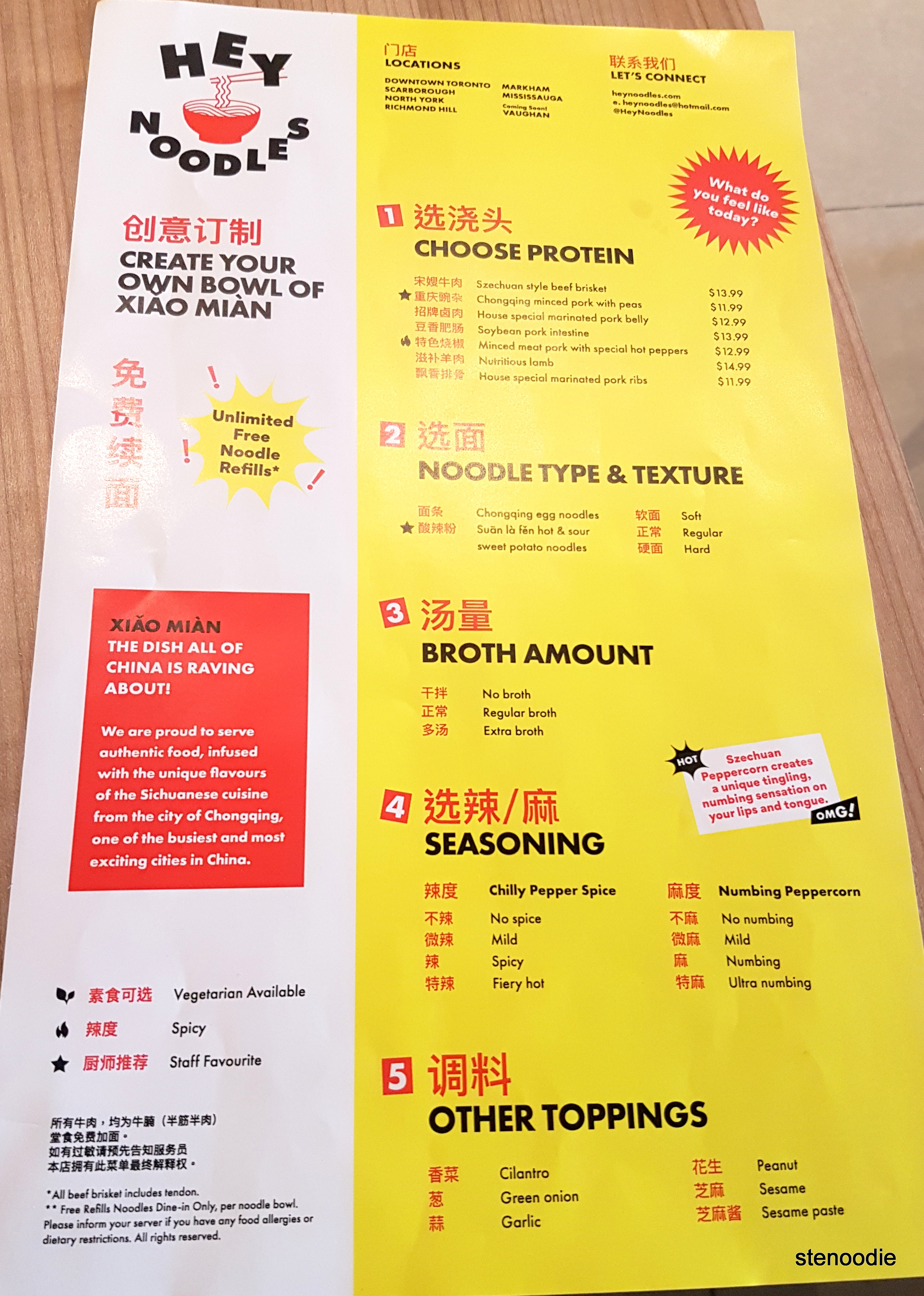 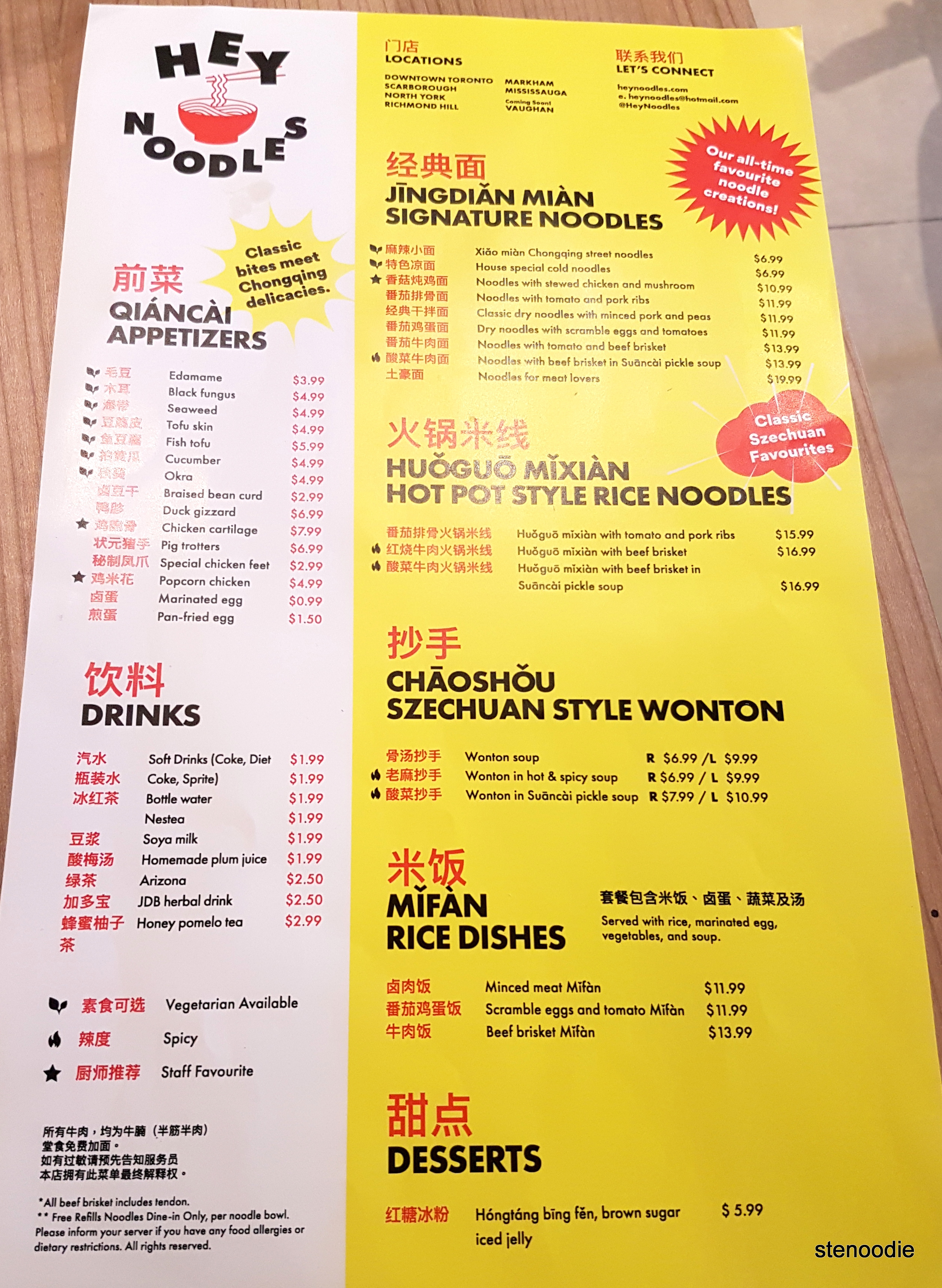 Lots of noodles and appetizers to choose from

On this visit, we were able to try several items on the menu.  I have been to the Richmond Hill and Markham locations of Hey Noodles previously (the Markham location also had the $1 noodle promotion at all stores when it opened recently). 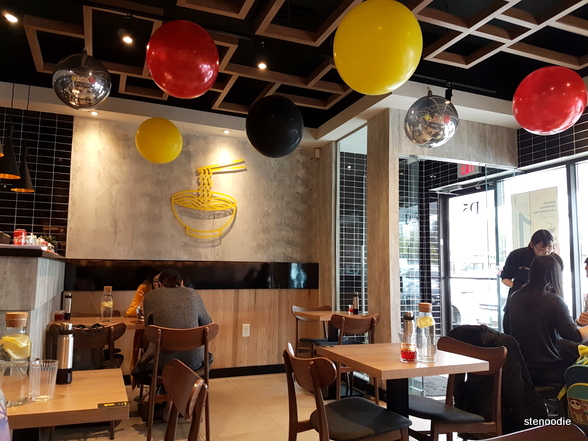 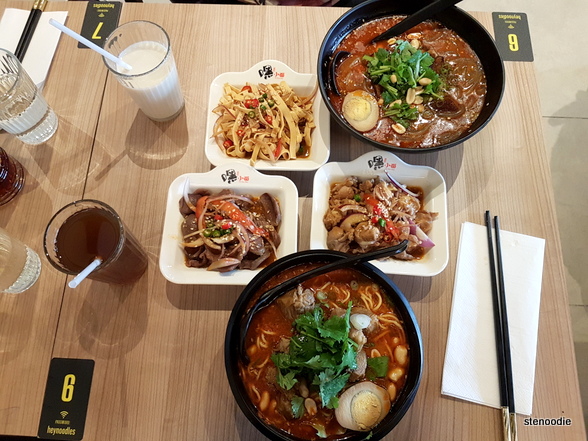 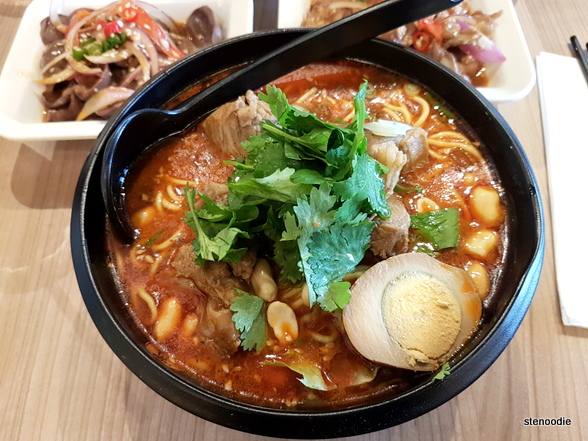 I tried the Create Your Own Bowl of Xiao Mian option.  You can choose your choice of protein, noodle type and texture, amount of broth, seasoning (spiciness and numbness), and other toppings.  I picked the “Nutritious Lamb“, soft Chongqing egg noodles, extra broth, mild chili pepper spice, mild numbing peppercorn, and all of the toppings (cilantro, green onion, garlic, peanut, sesame, and sesame paste).

Even though I had chosen “mild” for both the spiciness and numbness, I found that this bowl was spicier than the one I had had before at the Markham location.  The lamb was so tender and very delicious.  The Chongqing egg noodles were very tasty and especially so after it had been in the hot broth for a while to soften them up even more.  I also liked the halved marinated egg that was in the bowl too. :9 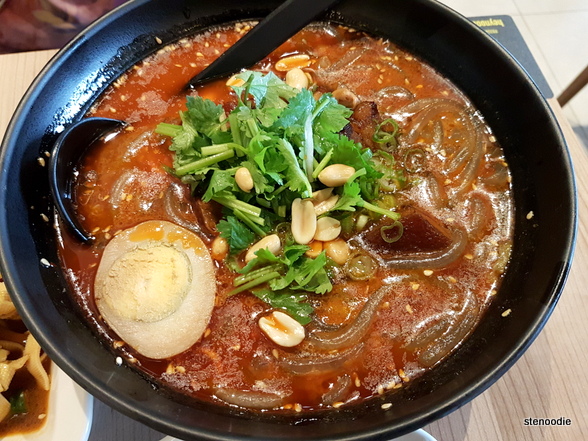 My mom also ordered the Create Your Own Bowl.  She chose the house special marinated pork belly with hot & sour sweet potato noodles, extra broth, regular spice and numbness, as well as all of the toppings too.  I tried the hot & sour sweet potato noodles, and they were delicious.  They had soaked up all of the broth from the soup which made it extra flavourful.  I loved how tender and perfect the marinated pork belly was.  It was seriously one of the best ones I’ve had.  The fat to meat ratio was 100% on point! 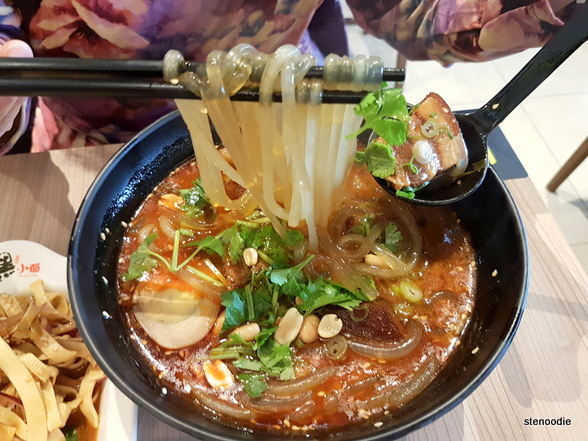 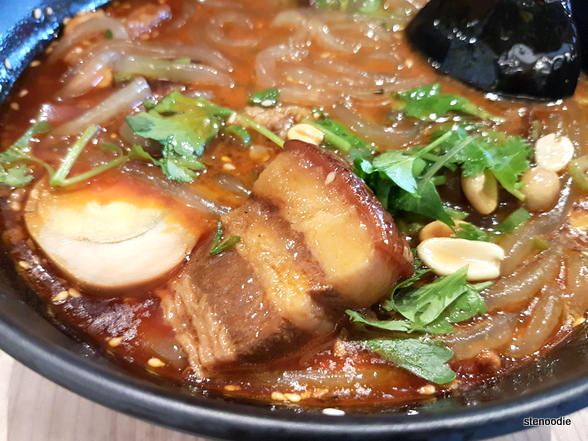 For appetizers, we had the fish tofu (which I think they actually gave us the braised bean curd instead in hindsight), chicken cartilage, and duck gizzard.  All of these appetizers are at room temperature and come with peppers, onions, and some numbing sauce for extra flavour.  They are great to eat between bites of the noodle soups or as an appetizer alone before the noodles arrive.

The Chicken Cartilage had a lot of actual chicken meat attached to the chewy cartilage itself.  It was very meaty and delicious. 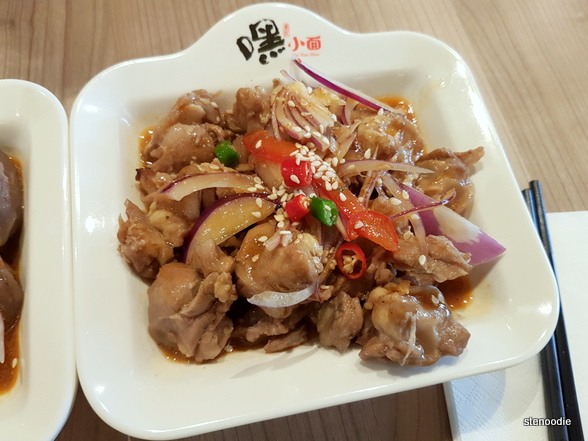 The Duck Gizzard was softer in texture than I expected.  It was still very well prepared though. 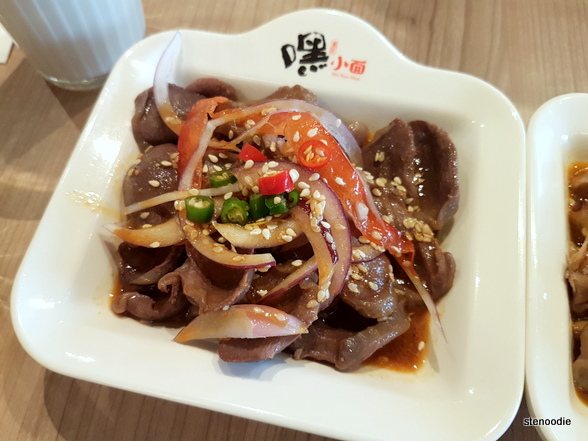 The Braised Bean Curd, while simple, was also tasty.  All three appetizers were very generous in portions as well. 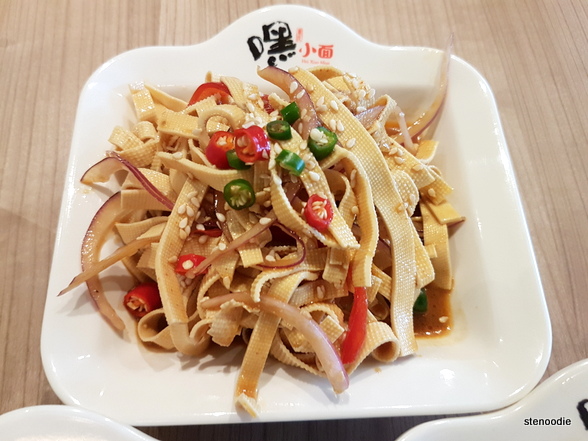 We had the Homemade Plum Juice (perfect for complementing and balancing your heaty body) and Soya Milk (great soy taste and not too sweet) as drinks. 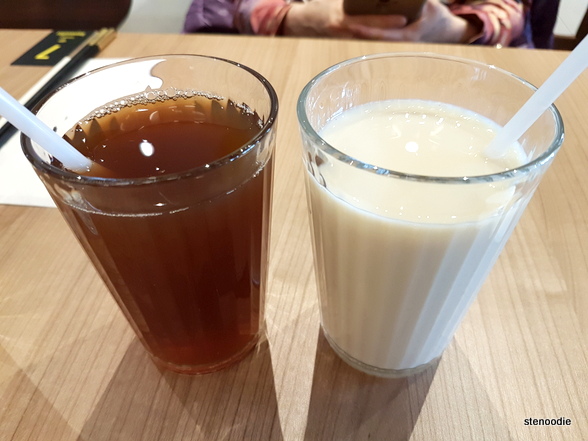 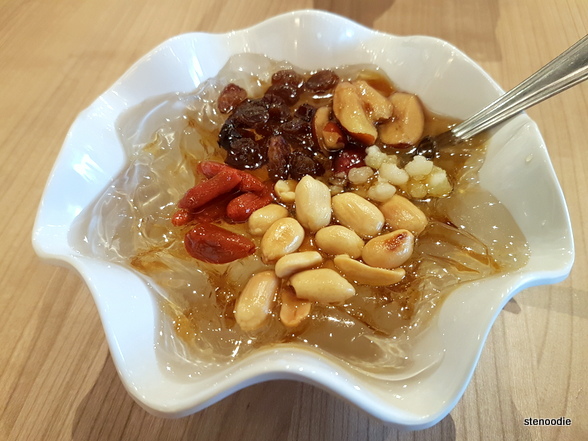 Lastly, we enjoyed the new dessert, Brown Sugar Iced Jelly.  This was absolutely delicious!  It was iced and thus very cold which helped to refresh our mouths after the spicy food items.  There were various ingredients on top of the iced jelly like peanuts, raisins, goji berries, and rock sugar.  This was such a great dessert and perfect for pairing (it’s a very big portion!). 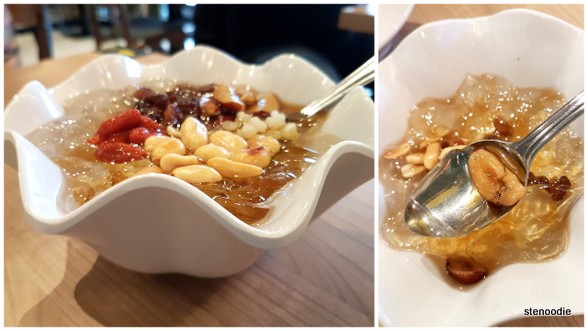 The iced jelly was so clear!

Thank you so much Hey Noodles and Devon for inviting me to this preview tasting!  The $1 promotion is on for three days on May 12, 13, and 14, 2019 at all Toronto locations of Hey Noodles! 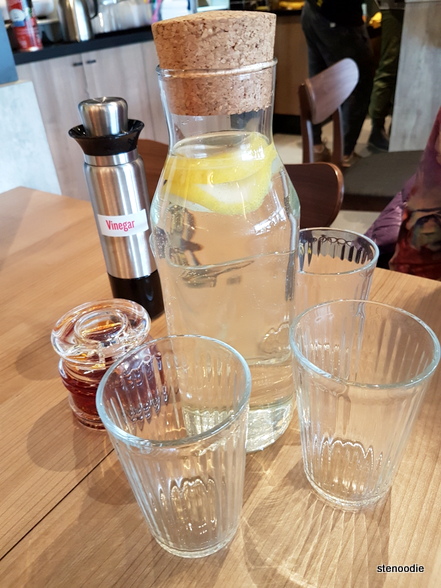 Lemon-infused water pitcher at every table 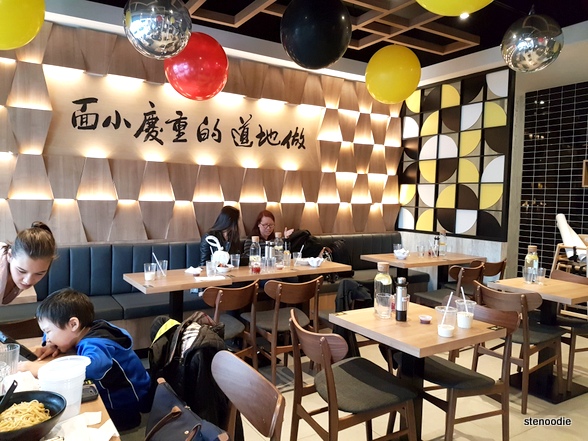 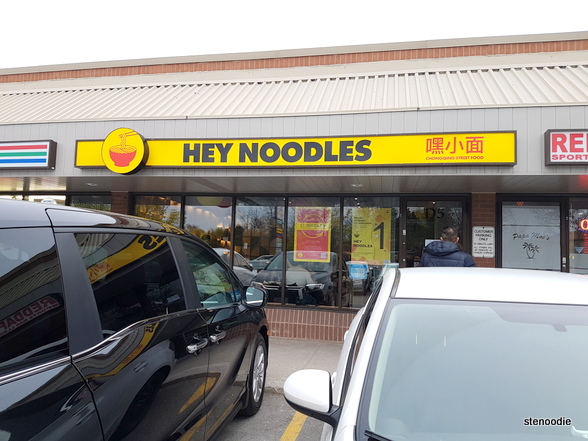 FTC Disclaimer:  Although I was invited to a complimentary tasting at HeyNoodles, the opinions expressed here represent my own and not those of the business.