The 3 Brewers in Richmond Hill (Defunct) 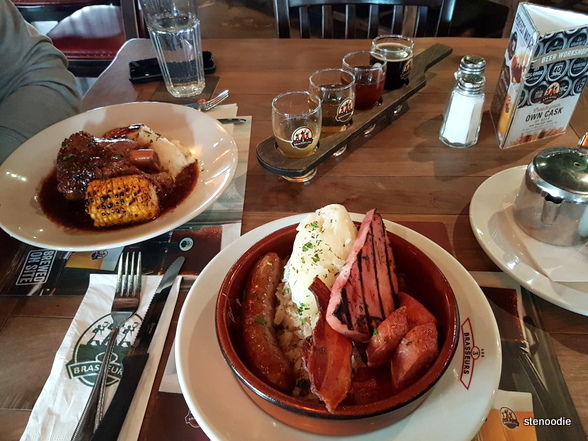 May 4, 2019:  I remember first dining at a 3 Brewers in Montreal with friends many years ago and the blonde ale beers and how they had barrels of peanuts at the front of the restaurant that you could scoop for yourself.

This visit at the Richmond Hill location was all right to me.  I actually didn’t realize that most of the items on the menu were German-based.  I wanted to order something different than the typical “western” restaurant offerings.  I chose the Traditional Sauerkraut while Ken ordered the Braised Pork Shank (also something I was intrigued in).  Of course, I ordered a flight of beer as well.  I love ordering beer flights! 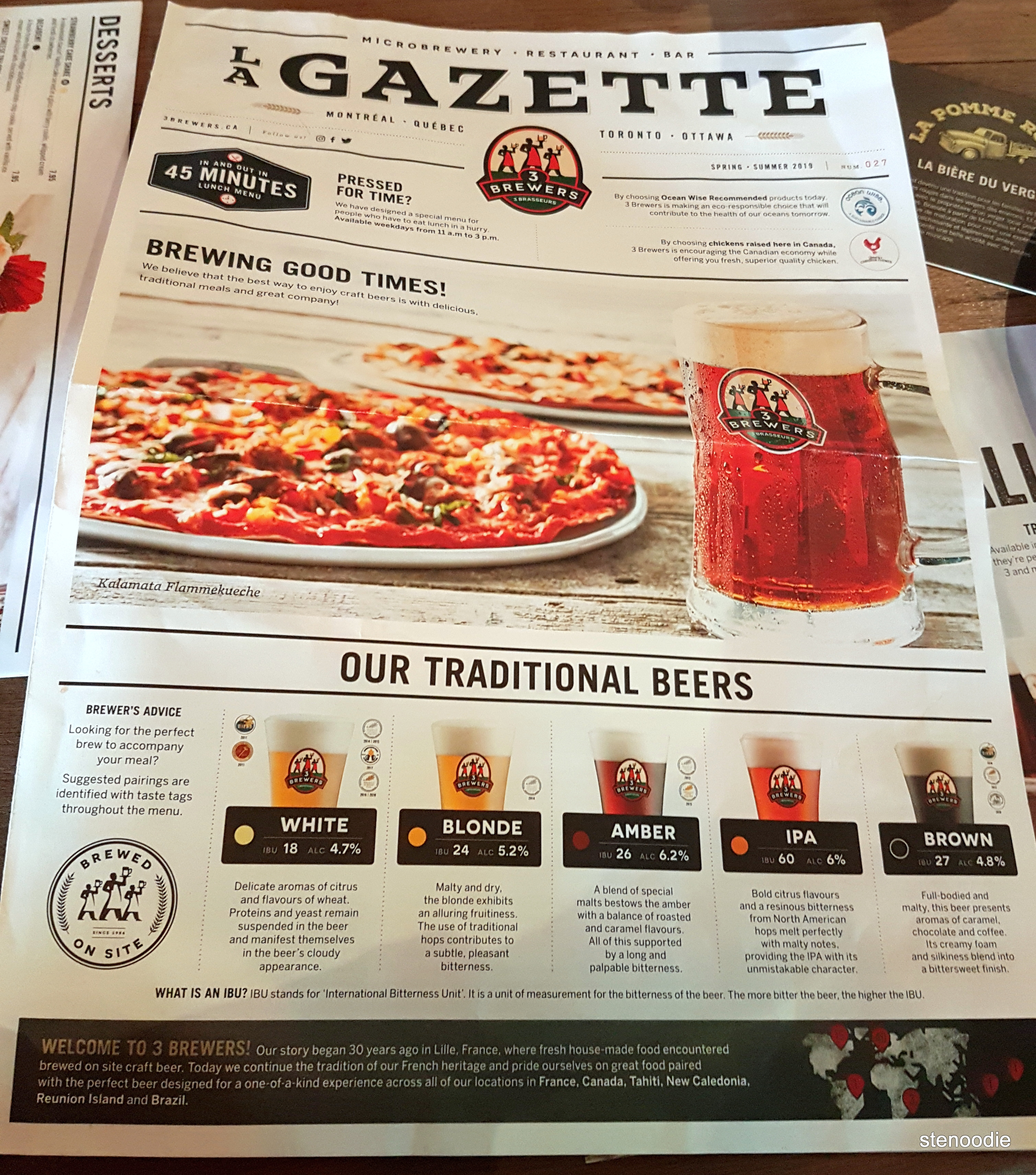 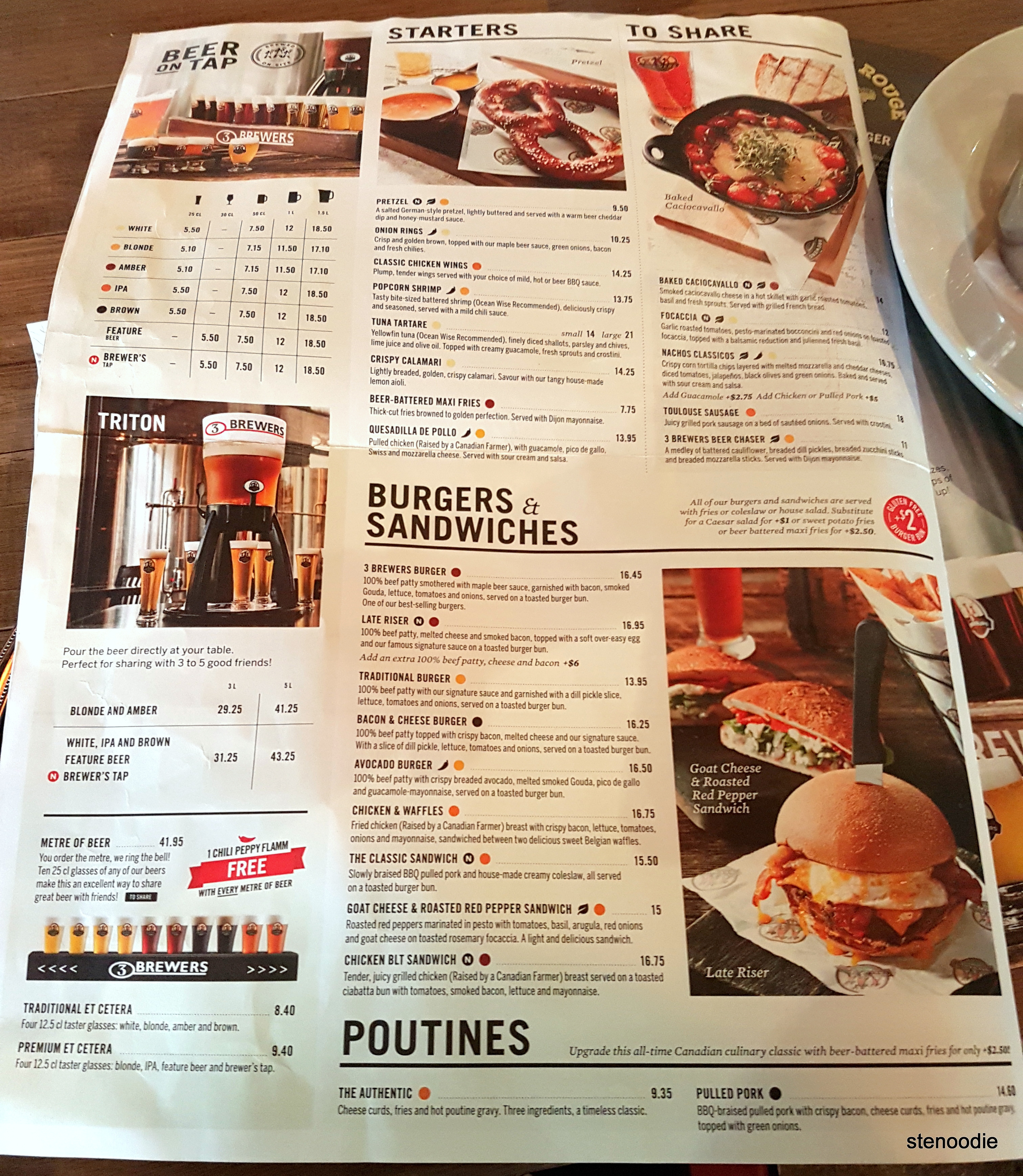 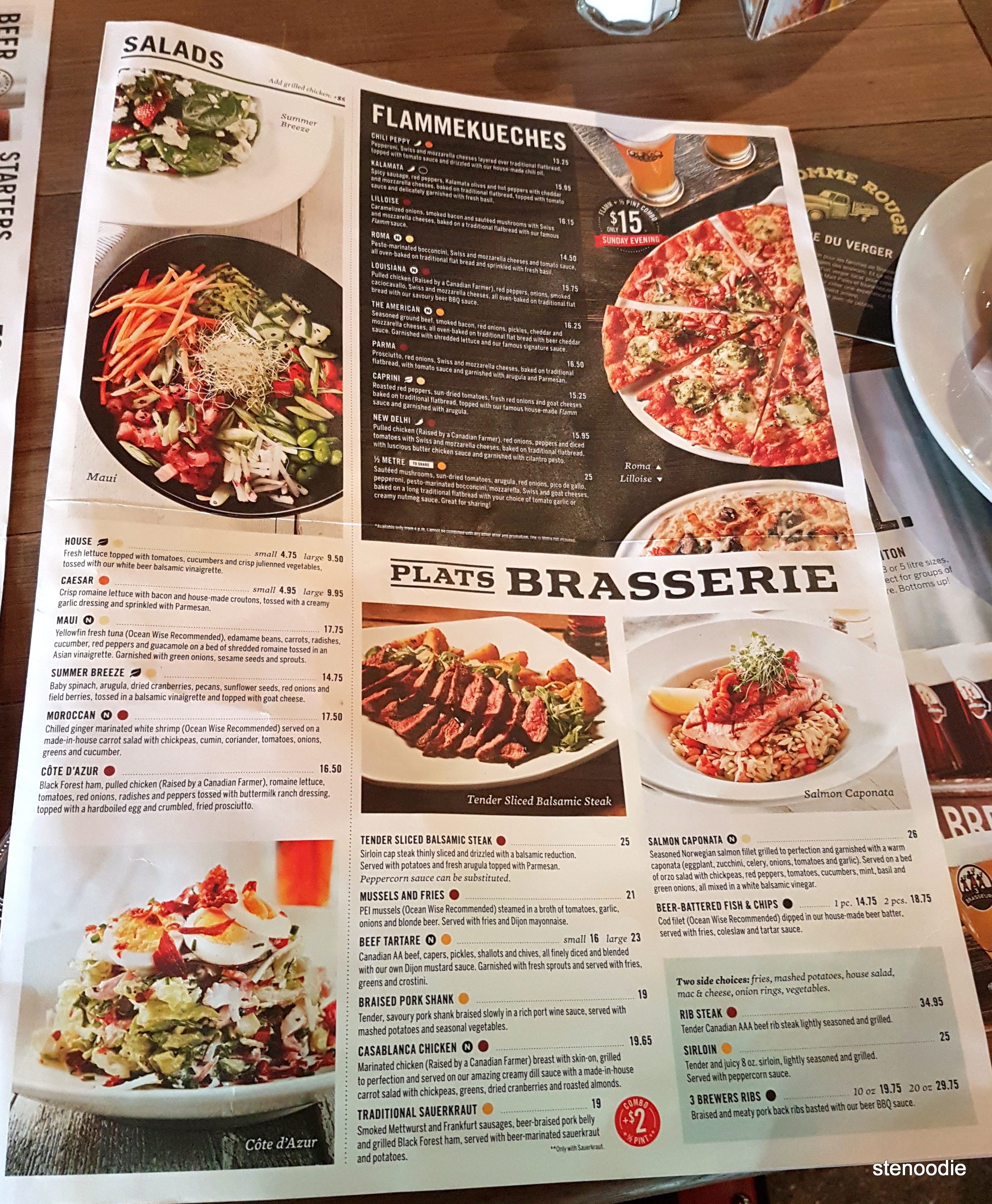 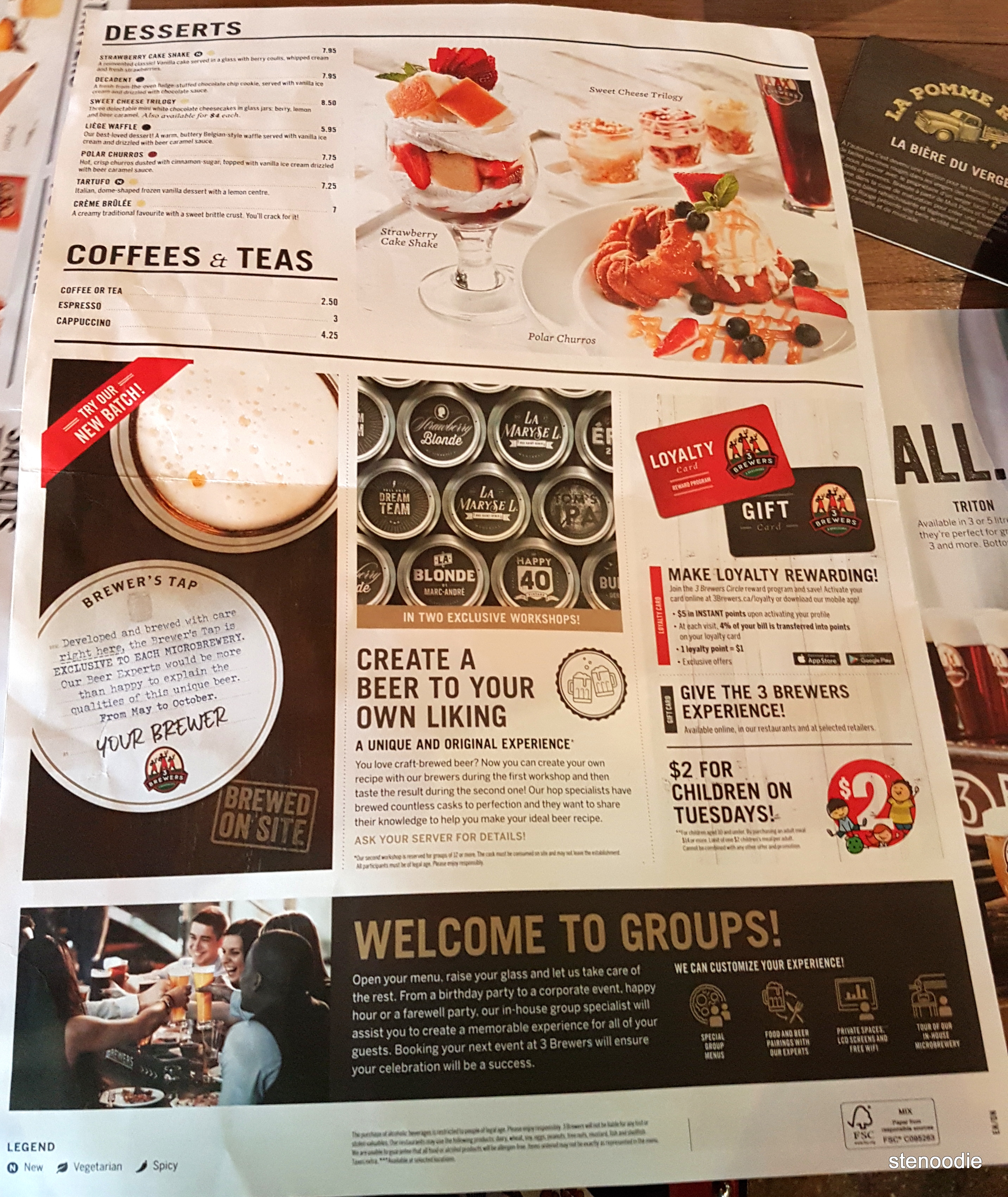 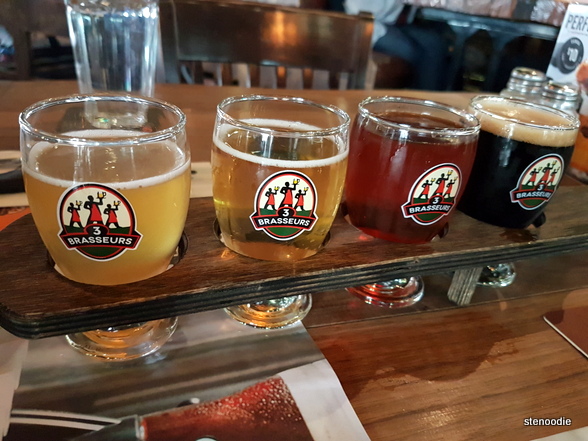 The beer flight arrived in a few minutes’ time after placing our orders, but the two mains took about 15 minutes to arrive (which felt like a long wait at the time).

We had the Traditional Et Cetera beer flight, which included four 12.5 cl taster glasses of white, blonde, amber, and brown beer.  I liked the white and blonde amber beers the best.

The Traditional Sauerkraut had smoked Mettwurst and Frankfurt sausages, beer-braised pork belly and grilled Black Forest ham, served with beer-marinated sauerkraut and potatoes.  This was a very big and impressive-looking portion.  However, I quickly realized that most of all the meats in the dish were overly salty.  The grilled Black Forest ham was tough to chew through too.  I didn’t like the potatoes.  It was too soggy and neither soft or hard.  Most importantly, the potato was so bland.  I didn’t like this meat-centric dish that was so salty! 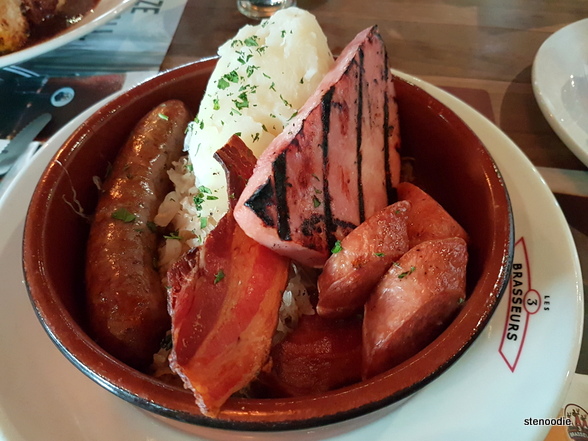 The Braised Pork Shank appeared nicely presented as well.  It was a piece of pork shank braised slowly in a rich port wine sauce, served with mashed potatoes and seasonal vegetables. The first bite of pork shank I had was the fatty tenderous part, which I was impressed with immediately.  However, when I had a bit of the meaty part after, I found that it was a bit too chewy and thus I was glad I hadn’t ordered that.  The mashed potatoes were all right. 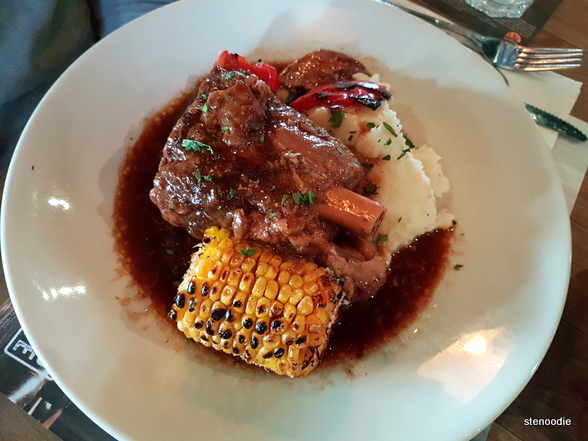 At the end of the night when we wanted to get a container to take home the leftovers, it took an awful lot of time for the server to remember our request and then for him to bring the container as well as the bill.  He apologized for forgetting about it.  We replied we were fine with it at the moment out of politeness, but honestly, it wasn’t fine.  He had wasted our time.

I liked how the take-home container was made of paper (yay, friendly for the environment).

Once again, I thought that the food was all right here.  I wouldn’t be in a rush to return. (No wonder The 3 Brewers was one of the only restaurants in the York Boulevard area without a crowd of people waiting for a table on a Saturday night at 7 p.m. prime dinner time.  All the other restaurants like The Keg, Milestones, Jack Astors all had large line-ups.)

1 Response to The 3 Brewers in Richmond Hill (Defunct)